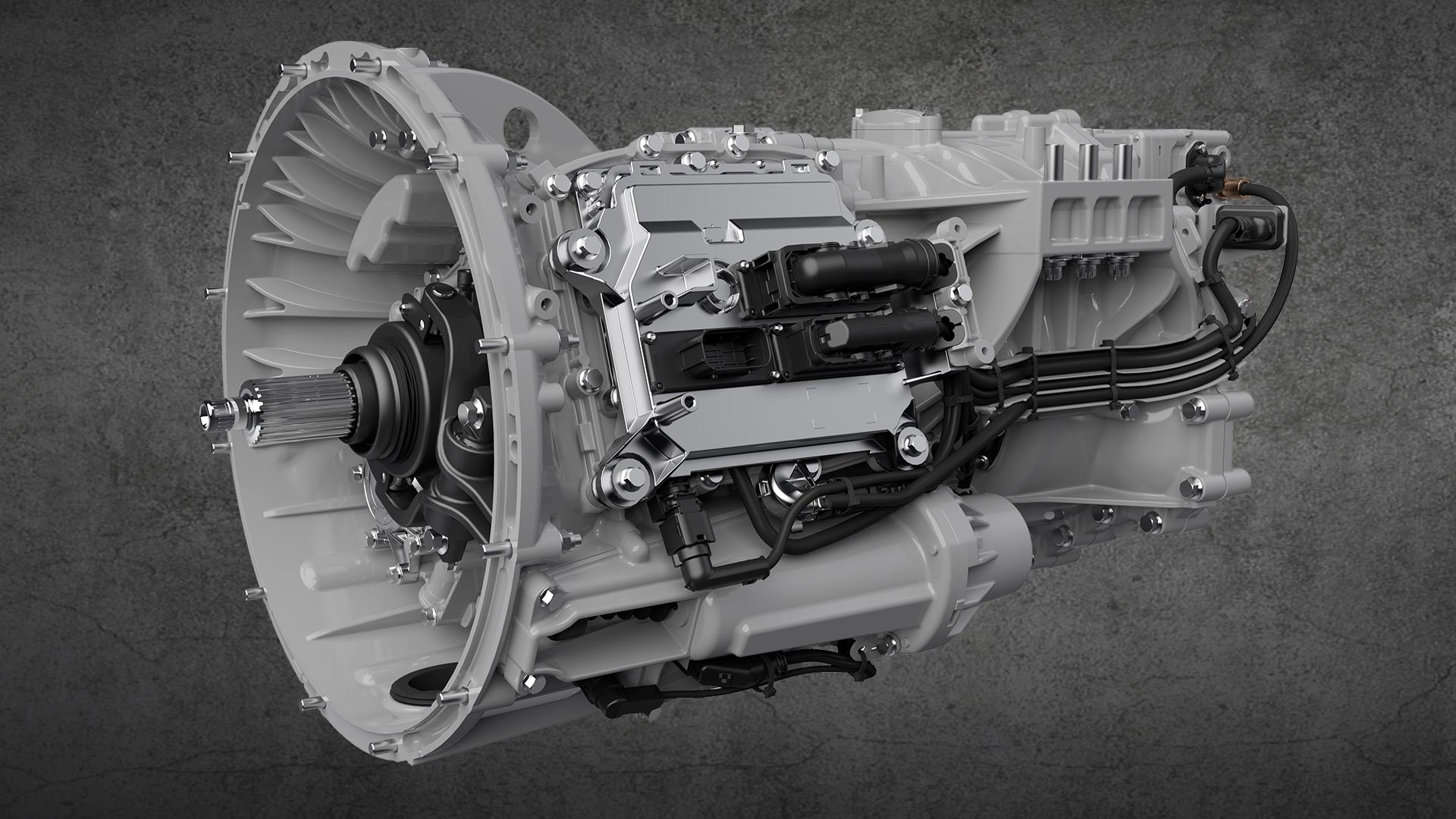 When it comes to developing a transmission that swaps cogs autonomously, Scania is certainly one manufacturer at the forefront in this field. In fact, Scania pioneered AMT (automated manual transmission) shift technology with their first incarnation of the Opticruise, released in 1995, which pre-dated ZF’s AS-Tronic by a few years and Volvo’s I-Shift by more than six years. However, while both Volvo and ZF abandoned the clutch pedal right from the beginning, Scania, on the other hand, was unwilling to do this initially. As a result, the two-pedal Opticruise eventually arrived on the market in 2009, and ever since then, its control strategies are constantly evolving, adding new functions and refinements.

The original Opticruise transmission differed significantly from rival automated boxes such as AS-Tronic, I-Shift and Mercedes’ PowerShift gearboxes because of its traditional manual gearbox design links. Hence it retained the synchroniser cones for the three main gears. On the other hand, the rival gearboxes are non-synchro designs and rely on electronic speed matching of the gears for shifts. Furthermore, the Opticruise’s automatic clutch uses electro-hydraulic actuation, whereas the others are electro-pneumatic. Scania maintains both these characteristics aid shift quality and smoothness in off-road conditions. Consequently, this makes the Opticruise an appealing option for vocational applications like logging, tippers and so forth. Furthermore, Scania argues that the synchronisers make it easier and inflict less stress on the gearbox when performing a down-shift for engine braking on a steep downhill gradient.

The manoeuvring mode, introduced with two-pedal Opticruise in 2009, heralded improved yard maneuverability. This feature modifies the action of clutch engagement for more precise control when making small, low-speed movements. Before this introduction, manoeuvring was a weak point with early automated systems, not only in Opticruise but across the board. In actual fact, our recent road test indeed confirms that this is no longer the case with Opticruise.

While some vocational operators are reluctant to specify an AMT transmission for fear that wheelspin in slippery off-road conditions often fools automated gearboxes into making unwanted upshifts, this is not the case with Opticruise because it senses speed from the front wheels. 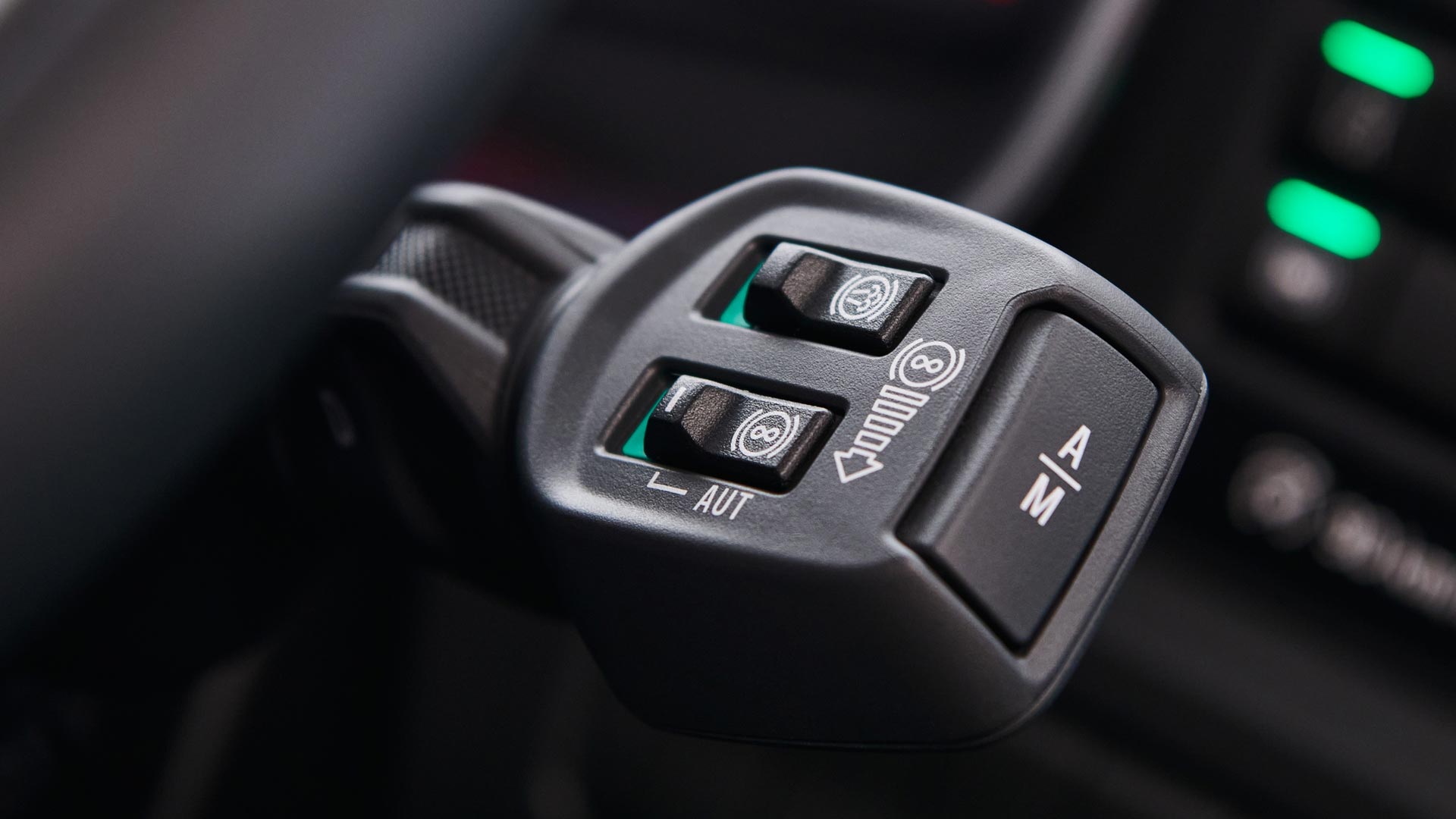 In the spring of 2013, Scania introduced two significant additions to Opticruise. Firstly, Scania Active Prediction (SAP), the GPS-enabled cruise control function, was integrated into Opticruise rather than being offered separately. Second, the addition of a new economy mode for Opticruise, joining the three other modes already available – standard, power and off-road.

Now Scania buyers had the flexibility to specify three of the four modes when ordering a new truck. The driver merely toggled between each mode using a switch on the steering column’s right-hand stalk to set the desired mode to suit the prevailing conditions.

Scania torques up its six-cylinder engine

Scania R730 on the Long Run

There are subtle nuances between economy mode and standard mode in many respects. For example, the kick-down function is automatically disabled, and a lower speed limiter setting is activated when switching into economy mode. Hill-climbing shifting strategy also changes. Conversely, in standard mode and cruise control, the truck may accelerate before a hill climb if it calculates that this would reduce the number of downshifts required on the grade. While operating in economy mode and cruise control, there is never a speed increase before a hill because it is marginally more economical to avoid this, albeit at the expense of few minutes.

In economy and standard modes, cruise control reduces the throttle input before a downhill descent to encourage the vehicle to start coasting, and it loses speed before the hill. The speed loss is up to 6 per cent below the cruise control’s set speed in standard mode, but as much as 12 per cent below in economy mode – a bone of contention among many drivers who feel progress becomes annoyingly slow and opens the door to ridicule from other truckers over the UHF radio.

Power and Off-Road modes, on the other hand, are very similar. Both modes permit the engine speed to rise higher than the torque-focused standard mode when making gearshifts. By using more power, in theory, reduces the number of shifts. Shifts are also faster in both these modes, either to speed progress or to minimise loss of traction, but consequently, the trade-off is fuel economy. 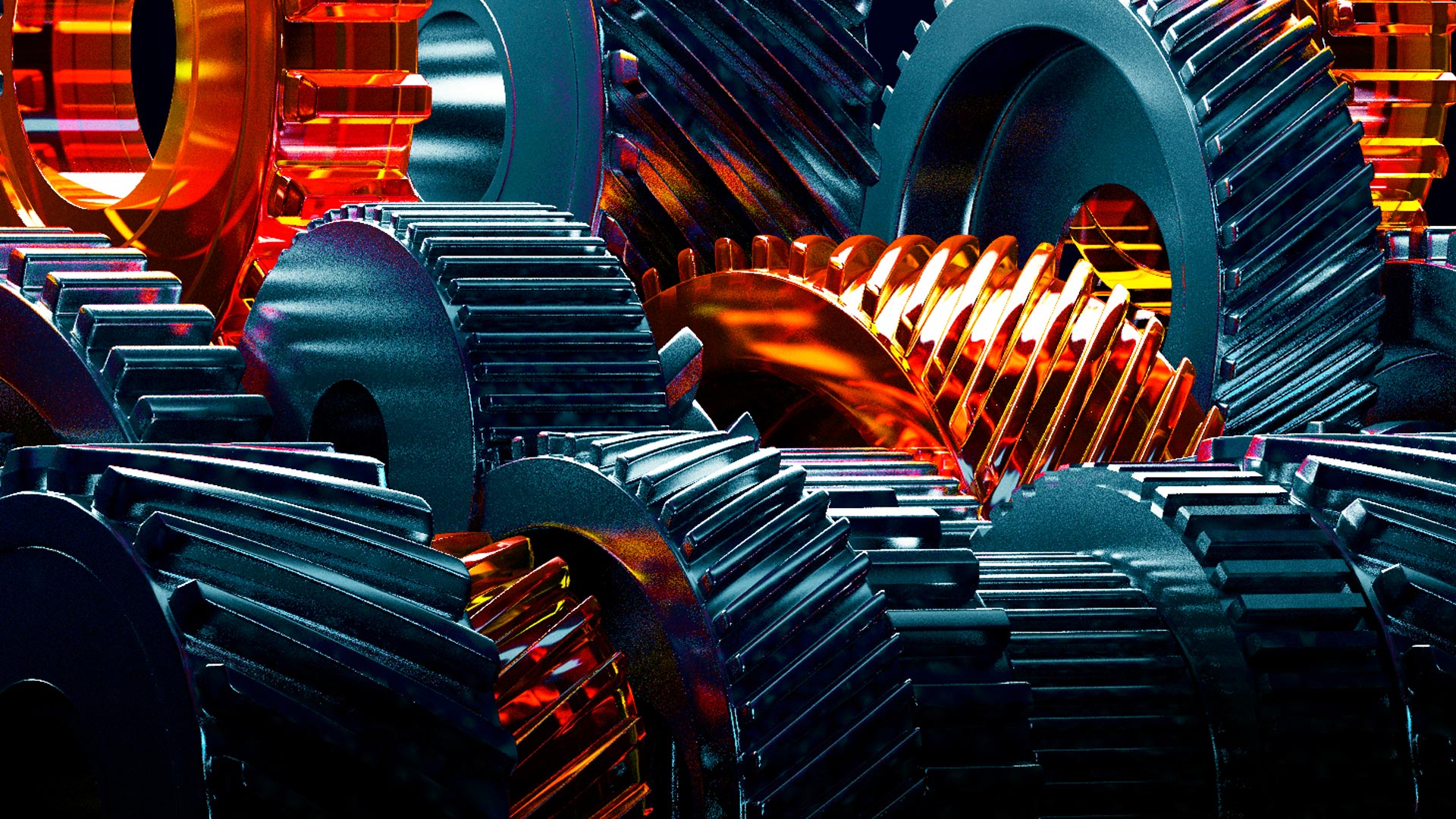 By early 2014 trucks built with Opticruise and integrated SAP also included the newly introduced eco-roll function. However, Opticruise will not always disengage the drivetrain going down every hill because when the truck is coasting downhill in gear, fuel delivery to the injectors is cut off; however, you still have driveline drag. On the other hand, using eco-roll eliminates driveline drag when the transmission shifts into neutral, but the engine requires fuel to keep it idling. Depending on the engine specification, fuel consumption at idle is 1.5 to 2.0 litres an hour. So Opticruise looks at the difference between the driveline drag losses and the fuel used with eco-roll, then calculates which approach uses less fuel. Scania estimated that eco-roll could generate fuel savings of up to 2 per cent in hilly terrain.

Shifting into the Next Decade

The current Opticruise transmission that has served Scania operators for well over two decades has recently received a significant design overhaul. In fact, the only thing that carried over from the older model is the name; “Opticruise”, the gearbox is an entirely new transmission.

At the launch, Scania said it is a colossal undertaking developing an entirely new gearbox range, especially when you will ultimately outperform what is already an industry benchmark. Consequently, the new Scania Opticruise gearbox range has no parts in common with the existing gearbox range.

“The design team’s assignment was to develop gearboxes that could handle all the diverse demands of the next decade,” Jimmy Larsson, Senior Manager, Head of Gearbox Development, Scania R&D, said. “Especially with fuel consumption, drivability, reliability and sustainability,” “Furthermore truck combinations with high GCMs can utilise fast axle gearing while still achieving the desired startability.”

“Scania has an enduring tradition of offering powertrains with high torque, low engine RPM as key elements for achieving low fuel consumption,” Lasson continued. “If a suitable cruising speed can be maintained at around, or just above, 1050 RPM, this will definitely save fuel. Up until recently, a typical long-distance truck operated on a 1400 RPM. Scania’s new gearbox range has a remarkably more comprehensive gear ratio spread with a genuine overdrive gear on top and can efficiently handle low and high revs. 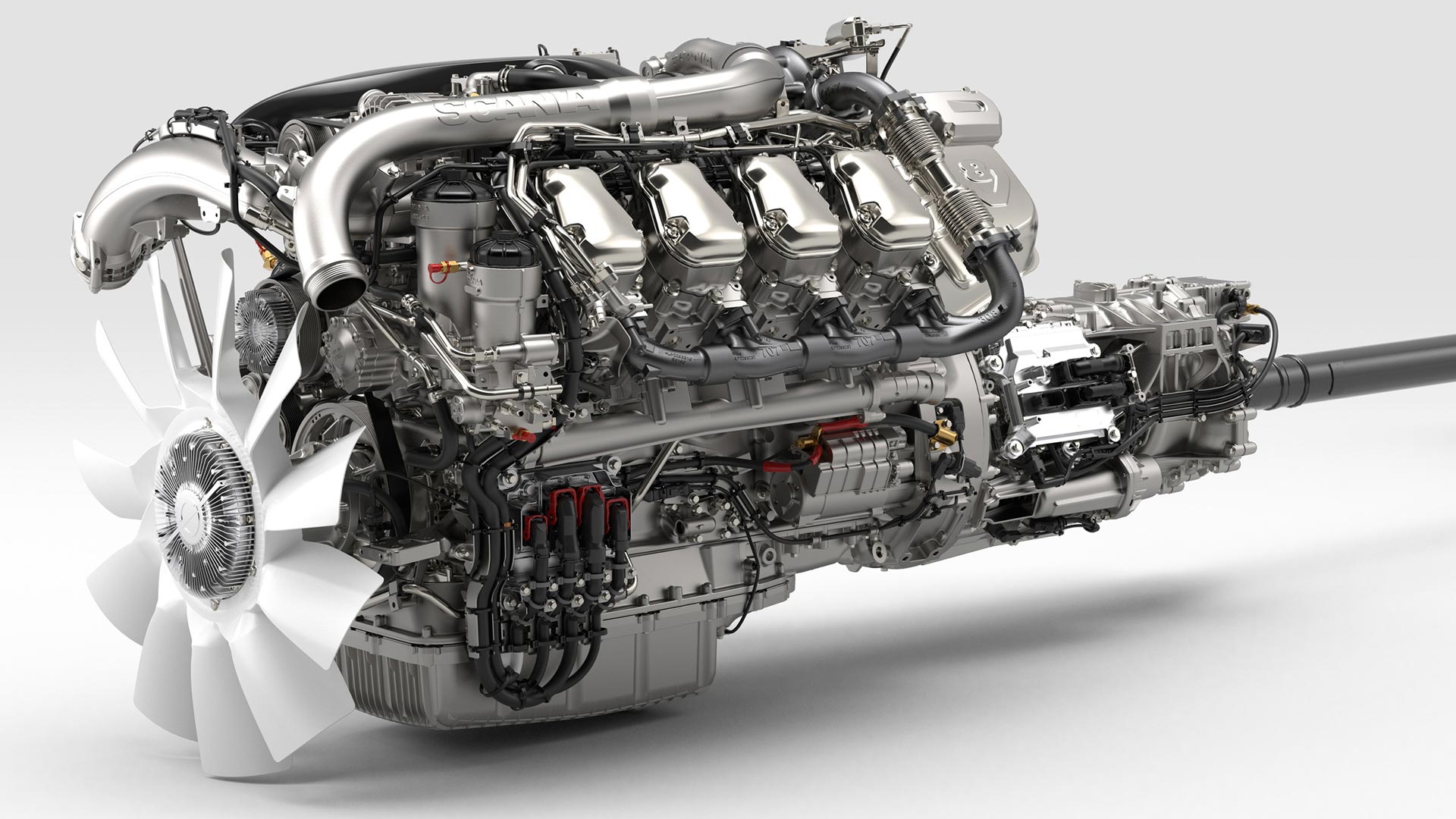 Fuel-saving capability is a prominent feature with these new gearboxes, which is why Scania engineers focussed on reducing internal friction. The intended target was reached, with internal losses reduced by no less than 50 per cent. This reduction was accomplished through polishing some of the gears, using low viscosity MTF oil and by relocating the lion’s share of the oil into a separate, dry sump-like part on top of the gearbox. By lowering the oil level in the transmission, this, in turn, lessens internal oil splash because the gears are not continuously covered in oil (imagine a water wheel). In addition, certain cog areas are vulnerable to hard-wearing when absorbing force. These cogs are supplied with extra oil by spray pipes for increased cooling and lubrication.

The first release in the new Opticrusie transmission range, G33CM, is over 60 kg lighter than the current gearboxes, primarily due to the all-aluminium housings and somewhat smaller overall dimensions. Another significant achievement is reduced noise, an essential requirement for achieving future regulations. As a result, the average noise curtailment is up to 3.5 dB, quite a considerable drop when considering that the dB scale is logarithmic. 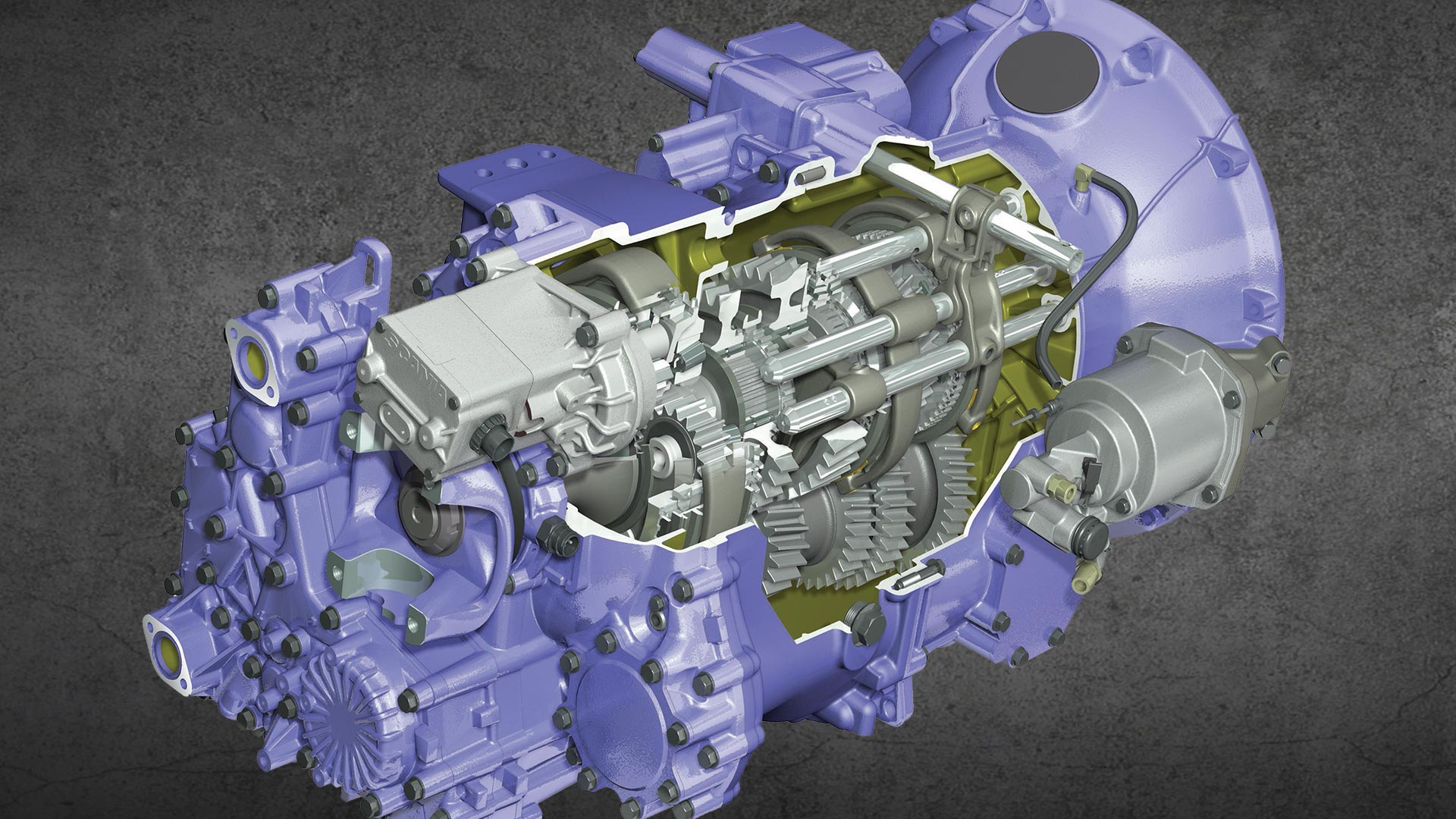 The new transmissions are considerably shorter than the most common Scania gearbox GRS905. In addition, using only two synchronisers (compared to seven in the previous version) between high and low range split, the new gearboxes are shorter and sturdier, with shafts capable of handling far more torque. Subsequently, this now enables opportunities to use gears with slightly wider cogs that can handle more load and are more durable.

However, removing synchronisers now places higher demands on the gearbox management system and the overall gear-shifting strategy. Consequently, all the electronic systems are new and manage the pneumatic actuators and the shaft brakes (three in total) that are instrumental for swift, smooth and accurate gearshifts.

Scania’s engineers embraced a new approach to reversing. In most traditional gearboxes, going in reverse entails letting a separate cog wheel rotate the mainshaft in the opposite direction. By contrast, in the new Scania Opticrusie range, they employ a planetary engagement at the output shaft instead, and reversing is activated by locking up the planetary wheel carrier. This solution now provides the flexibility to use any of the eight gear ratios in the main box for reversing at speeds up to 54 km/h. This feature is undoubtedly valuable when, for instance, tip trucks reverse for long distances (such as at tunnel construction sites) or sugar cane haul-out applications, to name a few.

Subsequently, oil change intervals are now greatly improved due to higher precision and the addition of larger oil filters and high-quality oil.

Needless to say, no truck gearbox range would be worth mentioning without also citing its PTO (Power Take-Off) capabilities. Scania’s new Opticrusie range comes with an abundance of newly developed and clever PTO solutions to fulfil any number of advanced PTO needs to be requested by Scania’s customers, regardless of their application.

In fact, a broad raft of nine different PTOs will be available, characterised by increased performance, great flexibility via modularity and fewer drag losses. The EG PTOs are now directly driven by the layshaft and are pressure-lubricated by the gearbox. In addition, the new interface on the gearbox with a lubrication port means that they can power heavier equipment such as hydraulic pumps used for live bottom trailer discharge or walking floor operation.

If the engine speed of 1,050 RPM to 1,150 RPM is maintained while cruising, significant fuel is saved compared to much higher revving drivetrain configurations.

The combination of the high torque from the new Scania engines and the broader spread of total ratios in the gearbox make this achievable. The new gearbox also features an overdrive gear to maintain the engine speed level without compromising drivability. Engine-derived fuel savings in the region of 2 per cent are expected, resulting from re­duced internal friction, higher compression ratios, improved aftertreatment-systems and a new Engine Management System (EMS). 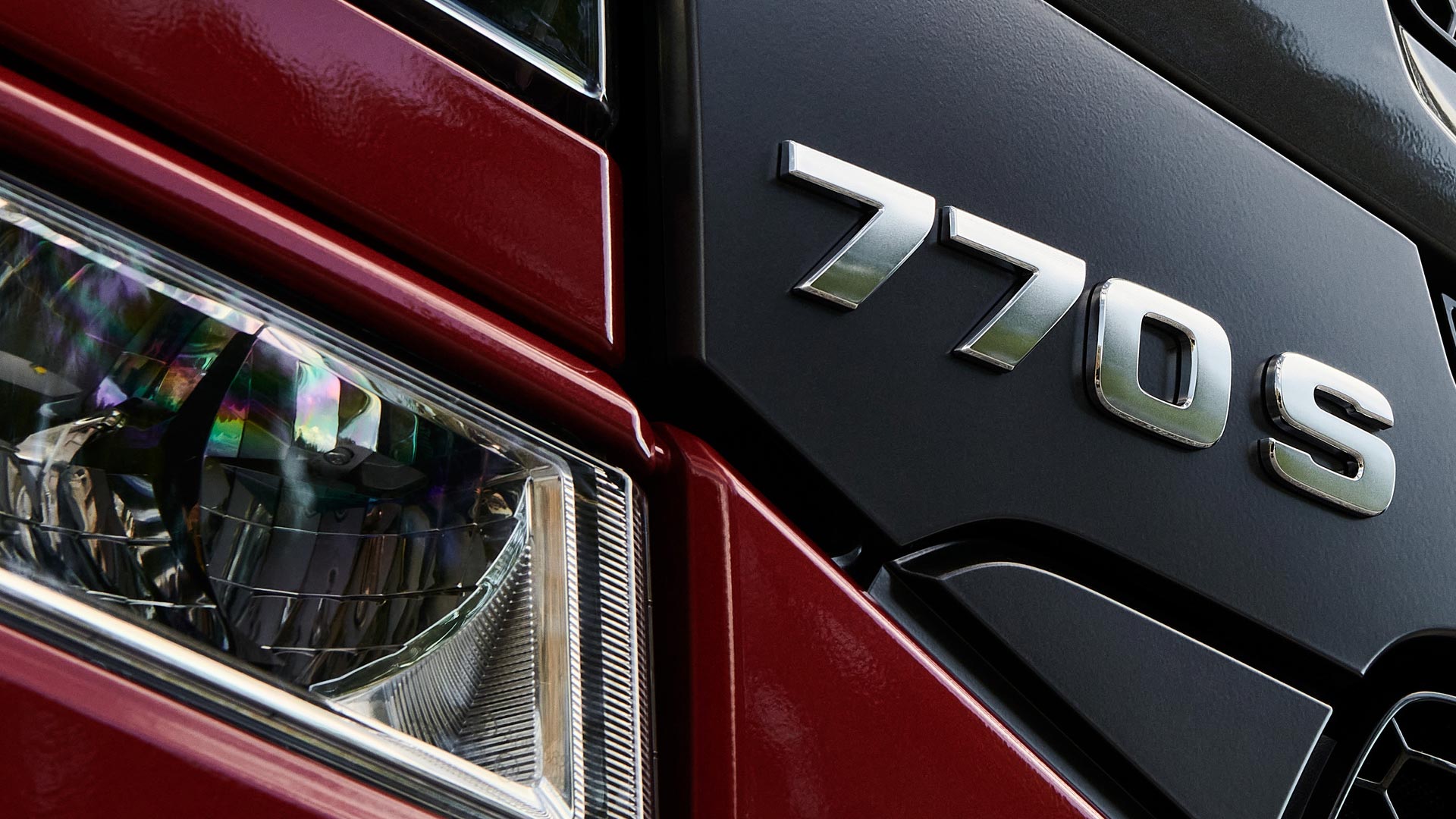