In the north of Western Australia, Iron Ore mining is the backbone of the region’s economy. In recent times the fall of Iron Ore’s price to below $60 a ton has many smaller mining operations questioning their on-going viability. Trimming operating costs to beyond the bare bones is critical in the continued survival during these harsh economic times. One innovative West Australian transport company is trailing Scania’s new 730HP twin steer prime movers in its Quad roadtrain operation to gain the upper hand. 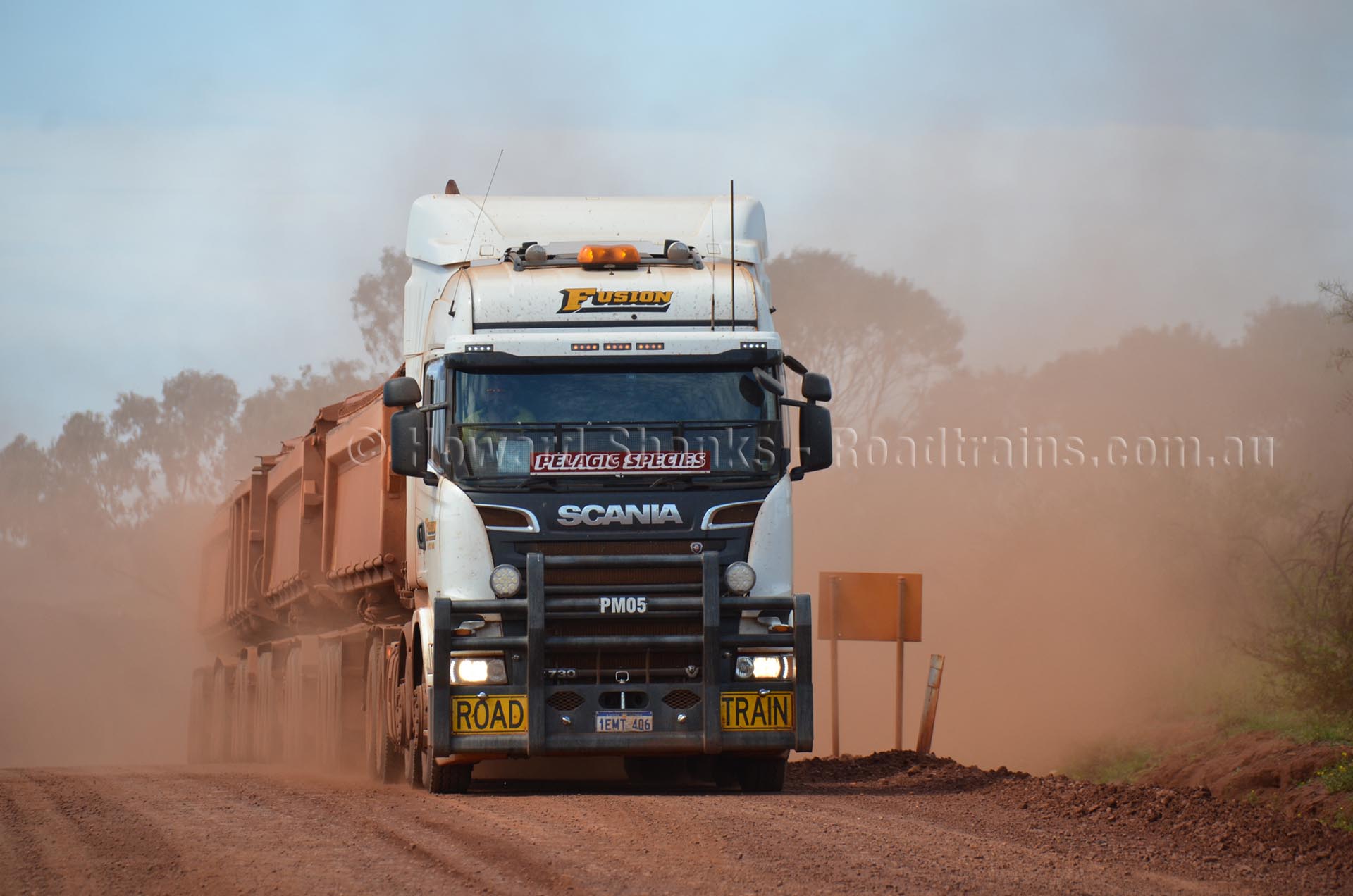 The sun had all but disappeared over the Indian Ocean. Way off in the distance a lonesome train’s whistle blew, signaling the arrival of a massive iron ore train at a nearby rail crossing. At the same time in Fusion Contracting WA’s Wedgfield depot senior driver Richard Szkurda was putting his lunch bag into the cabin of the 730 horsepower twin steer Scania idling in the yard. In a few minutes he would be heading out on a 780 kilometre nightly run to collect a load of iron ore and return to Port Hedland’s unloading facility.

The two Scania’s do two 12-hour shifts each day, with a gross train weight of 171 tonne. Its a challenging job, not only in terms of the harsh desert conditions and isolation of the Australian Outback but also in terms of competing with the private rail-lines of BHP, FMG and soon to commence Roy Hill Project. On top of this the falling cost of iron ore has forced many mines to reduce cartage rates just to remain operational. 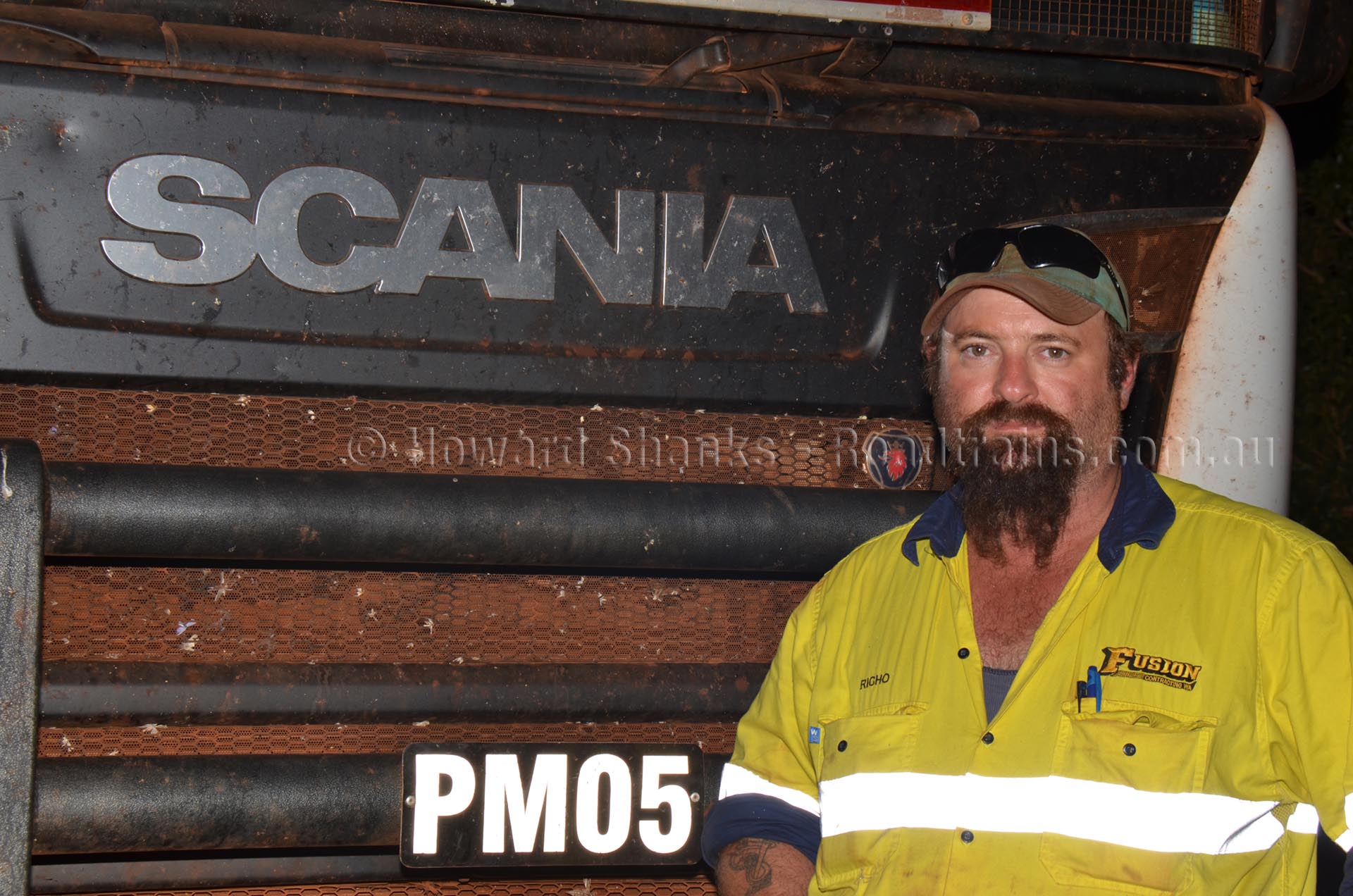 Scania driver Richard Szkurda with the R730 he operates

Given these challenges the introduction of the two new 730 horsepower Scania’s into Fusion Contracting WA’s iron ore quad roadtrain fleet 12 months ago albeit a bold one was a decision that wasn’t taken lightly. It was a well researched one, and only after being thorough calculations did Fusion Contracting WA’ s owner Jon “Casper” Edwards agree to trail the new 730 horsepower Scania trucks.

“Firstly I was impressed with the Scania’s retarding ability,” Jon revealed.  “Which should reduce the need to replace the trailer brake linings as often as we’d been with other brands. To give you an example there are 18 axles on each quad road train set. The cost to reline the entire trailer set cost us approximately $25,000. 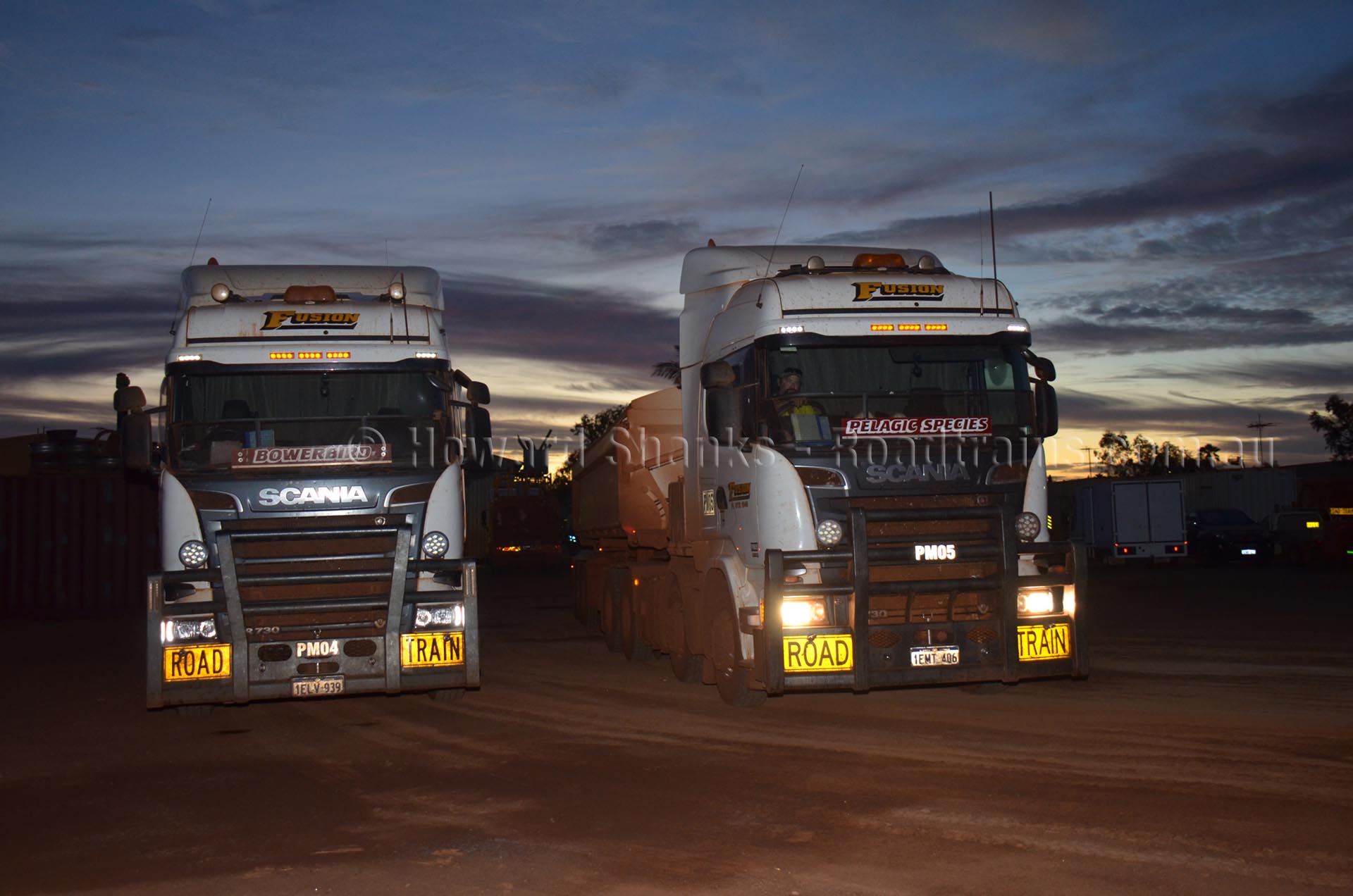 “I’d been studying various makes and options for some time to suit our expanding fleet,” Jon continued. “I’d noticed that the power race had, in effect, simply slowed for awhile after Volvo (in January 2009) broke new ground with the launch of the FH16 700. Around that time I’d read that some European commentators were wondering if Scania’s apparent apathy was in fact evidence that 620 horsepower was the limit of their long-serving V8’s power potential.”

“How wrong they were,” Jon smiled.

Scania carefully considered its options before eventually changing the V-eight’s metal structure to the lighter, stronger composition of compacted graphite iron, or CGI, and boring the block out to 16.4 litres. Then, among a swathe of new and redesigned components attached to this reconstituted hardware were the advanced XPI ultra-high pressure common-rail fuel injection system jointly developed with Cummins, a variable geometry turbocharger, a beefed up Opticruise two-pedal automated transmission, and critically, a substantially bigger radiator and intercooler package. The end result, of course, was a new flagship model called the R730 with a prodigious power peak of 537 kW (730 hp) developed at 1900 rpm, backed by a breathtaking 3500 Nm (2581 lb ft) of torque on tap from 1000 to 1350 rpm. 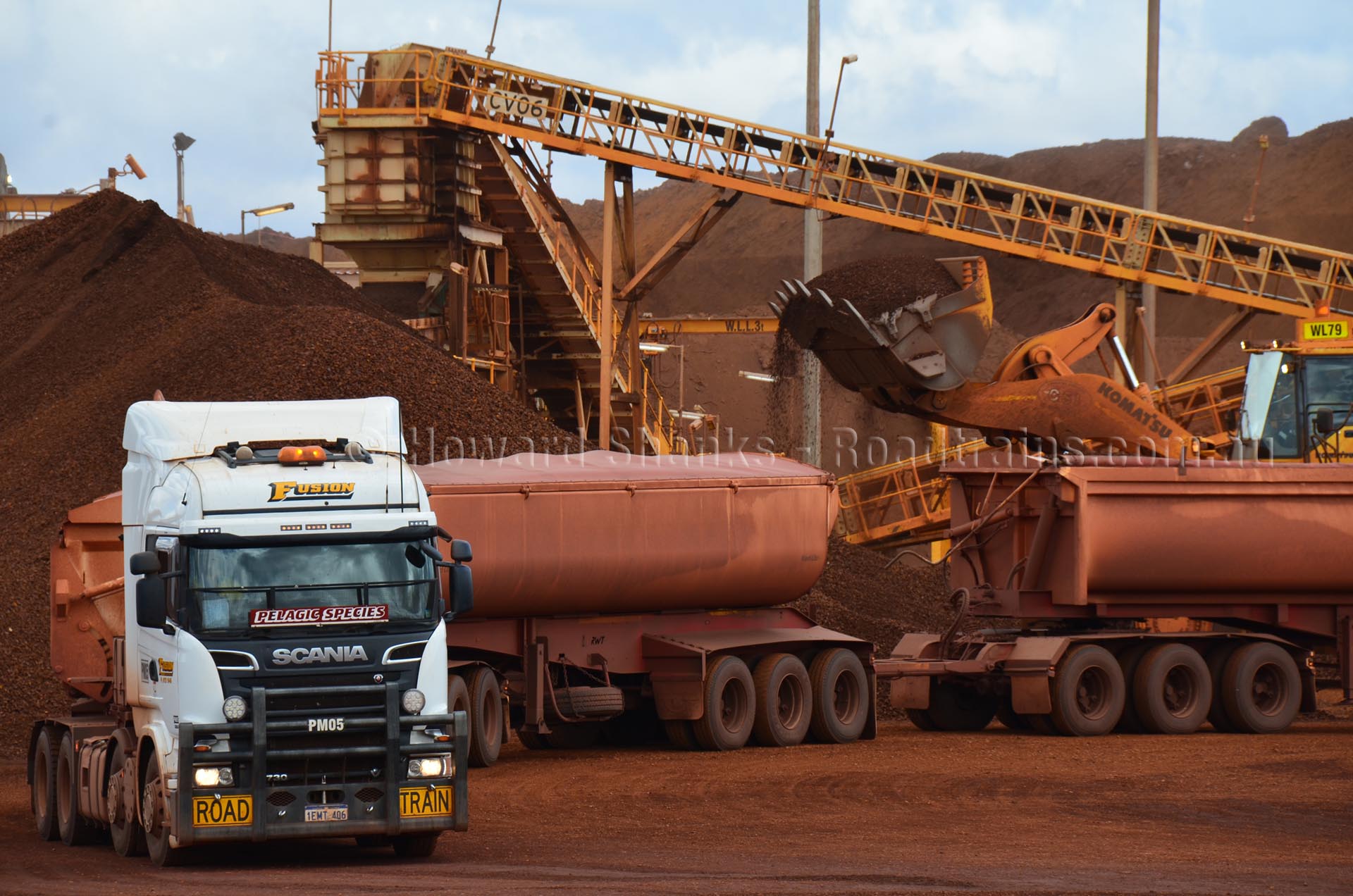 “Certainly I was impressed with new power output,” Jon conceded. “But I admit that I had some reservations as to how the Scania would perform up in the Pilbara region of Western Australia where some of the hottest days in the southern hemisphere have been recorded.

Jon’s thoughts were well founded, because in reality, most of the R730 trucks sold by Scania around the globe will not be expected to handle the rigors of multiple combinations in outback Australia. For the most part they will be sold in Europe where the 730 badge will be seen as a method of recruiting drivers and retaining their services. Even though trucks in Europe can run up to 60 tonnes, most prime movers pull single trailers and rarely go over 40 tonnes and 90km/h.

Here in the Pilbara however they would be expected to haul up to 175 tonnes at 90km/h, around the clock.

“Its all good and well to make plenty of power,” Jon explained. “But you have to be able to get it to the ground reliably and I’ve been a fan of Scania’s Opticruise transmission for sometime as our little P310 has one and it is a sturdy and reliable unit.” 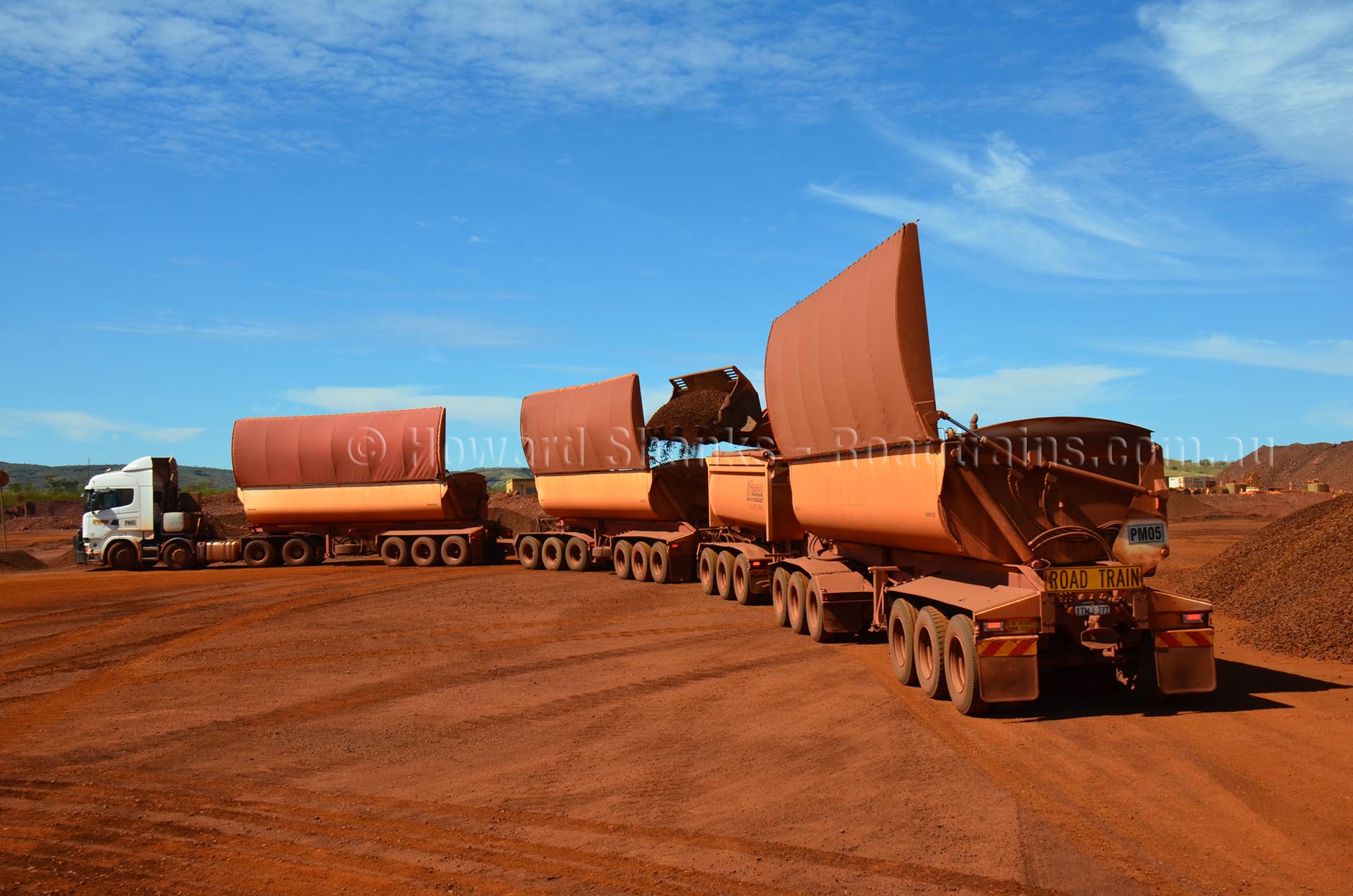 “However I was interested to learn that new Opticruise had been revised with improved functionality,” Jon added.

Scania report the new Opticruise, one of the first automated gear-changing systems on the market, has been refined in many steps over the years. The concept of a standard mechanical gearbox remains, but the system has been extensively revised with improved mechanical components and entirely new software.

For instance the gear-changing strategy is designed to continually adapt to the environment, taking into account factors such as road inclination, train weight and engine characteristics, as well as the position of the accelerator pedal to match the response to the speed of the pedal movement. Early down-changes are made to maintain speed on hills without wasting fuel. The new Scania Opticruise also features a Power mode that adapts the gear changing strategy for maximum engine performance.

The Scania is also fitted with load and inclination sensors that are used to automatically adapt the vehicle to the optimal choice of starting gear. No action is required from the driver. 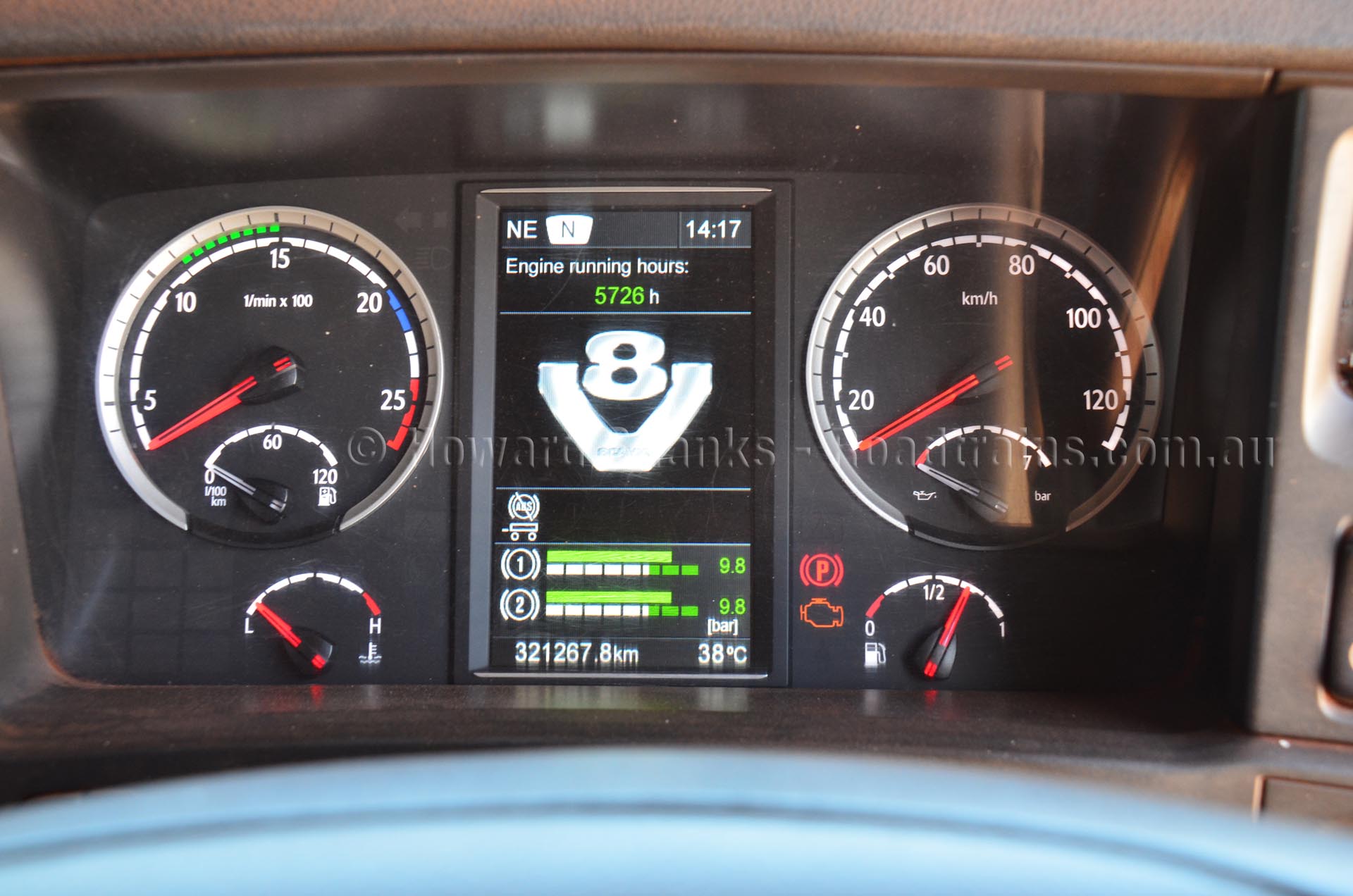 There is also a Rocking function, which rocks the truck forward or backward automatically when needed. The system identifies the need for rocking by comparing the rotation of the drive wheels with that of the front wheels. An extra smooth rocking is available in manoeuvring mode, which can be useful in ultra-slippery conditions.

The automatic clutch operates independently of driver skills and is programmed to engage fully at low engine revs. Clutch actuation is also adapted to the information from the inclination sensor and to the required starting gear. Hence, the engine speed is raised if needed to pull away cleanly.

The clutch is never slipped during gear-changes, only used to disconnect the gearbox from the engine. These functions will effectively protect the clutch and other powertrain components from mechanical abuse.

The hill-hold feature, which engages briefly after depression of the brake pedal when stationary, makes starting even more convenient. The hydro-electric control of the automatic clutch is unique in the industry, offering the benefit of particularly precise clutch actuation. 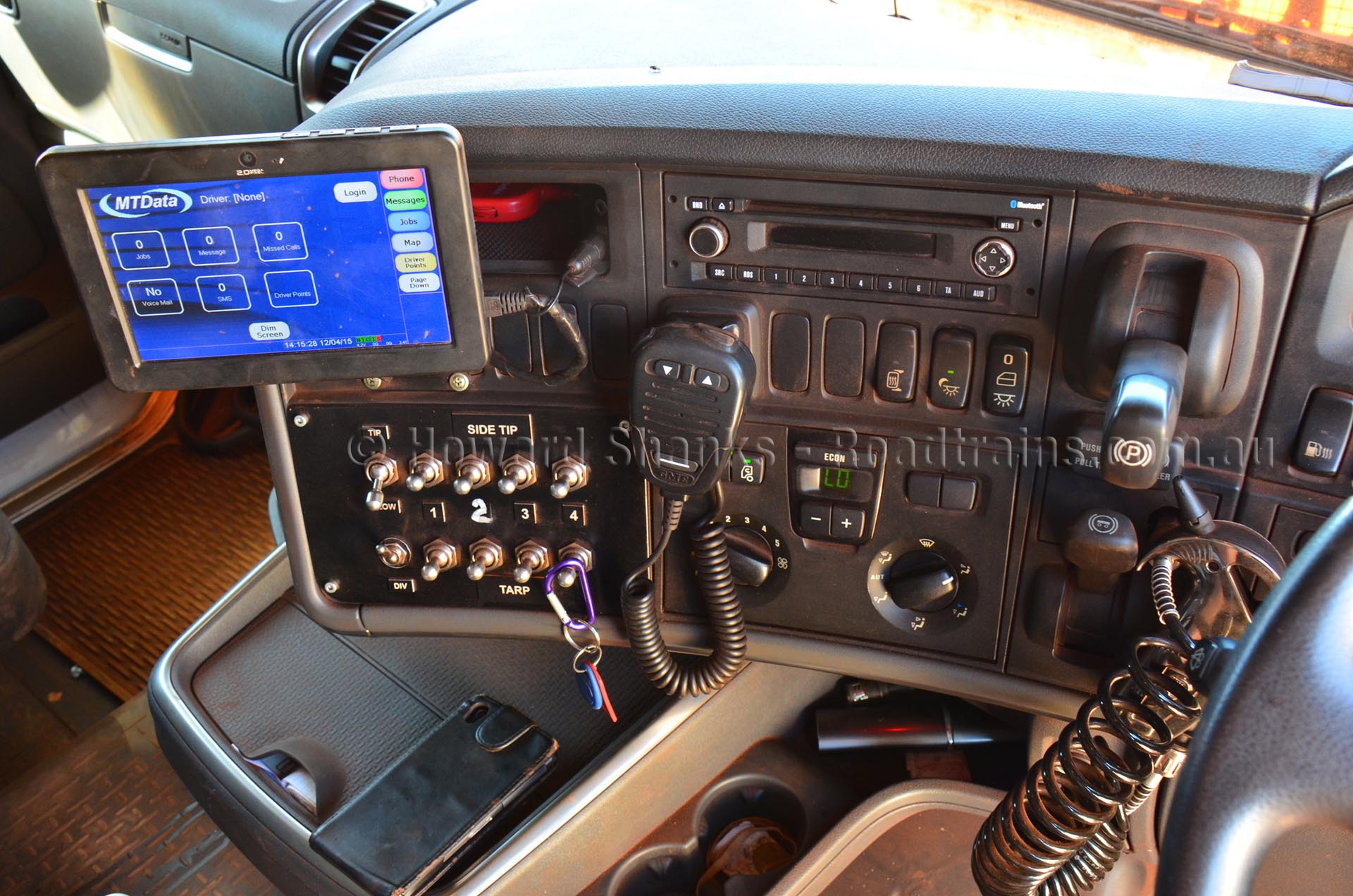 The Hardlite trailers and dollies are from local West Australian body builder Roadwest Transport and incidentally feature Swedish Steel “SSAB” which is quenched and tempered. A few of the major factors why these trailers are popular in the Pilbara region for the bulk commodities applications like iron ore haulage is their light tare weight, their ability to tip cleanly and spare parts availability.

Meantime driver Richard Szkurda was well on his way to the Iron Valley mine along the Great Northern Highway. Inside the cabin the ride is smooth and quiet.

All of the evidence points to something working very, very hard as the truck runs along at a steady 90 kph, but Richard explains the feeling in the driver’s seat is that it’s not working too hard at all.

“It’s much the same when it’s loaded,” Richard added. “There is no vibration from the driveline, it all runs very smoothly like a motorcar yet, at the same time, a 171 tonne combination is cruising down the highway.” 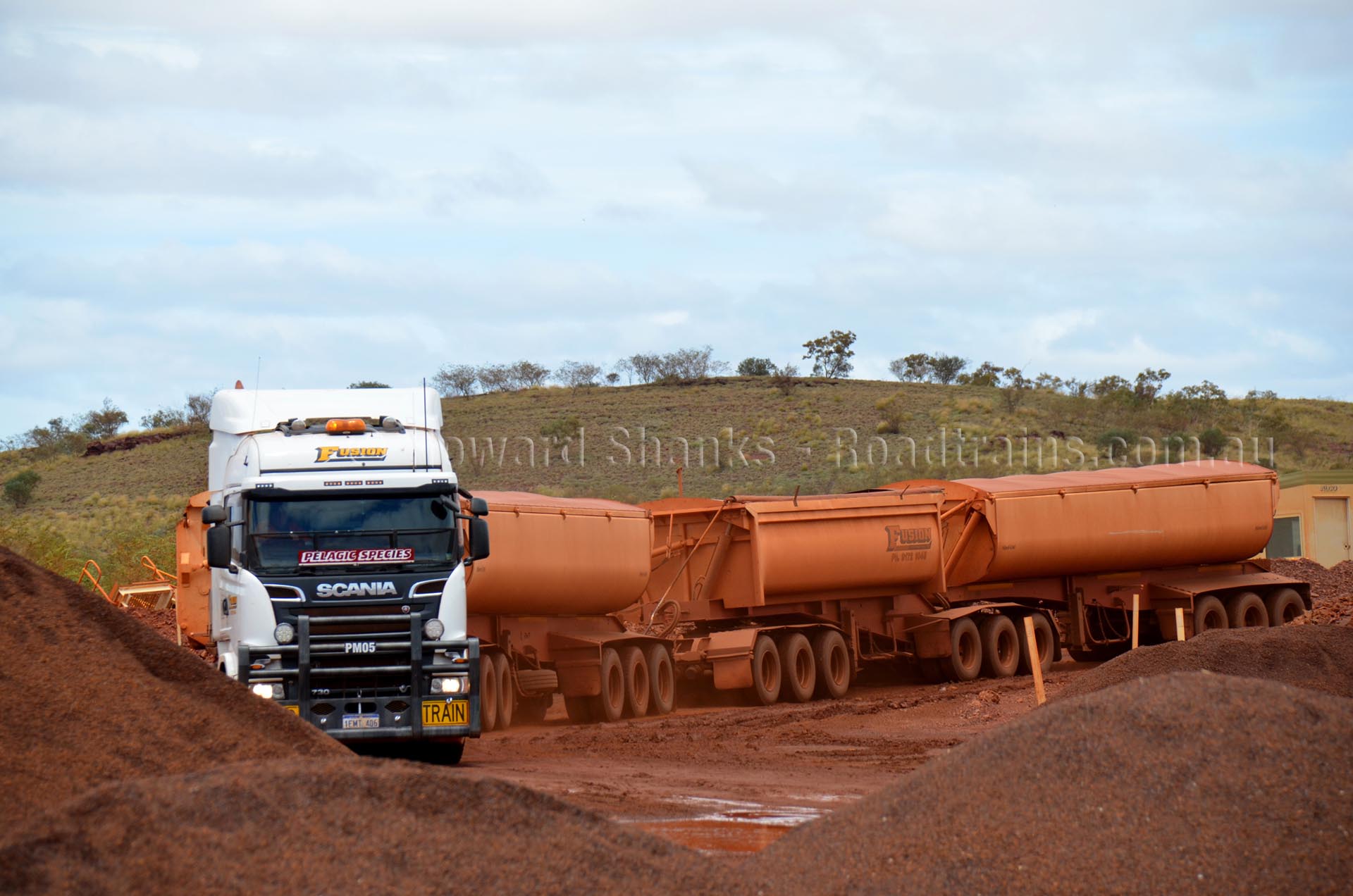 “Although the driving style is more relaxed when handling a truck like this,” Richard revealed. “It is still vital to remain very alert, at all times. There is no getting away from the facts and four trailers with a gross combination mass of 171 tonnes travelling at highway speed is constantly at risk – driver vigilance is paramount.”

“This combination of technologies, both from the driveline point of view and from the electronic control systems, modulating the accelerator and retarder controls, does work well in these long-distance outback-driving situations.” Richard said.

Just how well all the gizmos do their job is evident at the fuel bowser at the end of each shift. The R730 averages 630-650 litres of diesel and 40-45 litres of ad-blue per trip. To put that in perspective one of Fusion Contracting’s new Mack truck powered by an MP10 (rated at 600HP) pulling a triple (130 tonne) uses roughly the same quantity of fuel and ad-blue.

When asked if there was a down side to the R730 Scania, both Jon and Richard agreed the lack of fuel capacity on the chassis, which necessitated the additional fitment of a gantry to house additional fuel tanks, ad-blue tank and toolboxes. 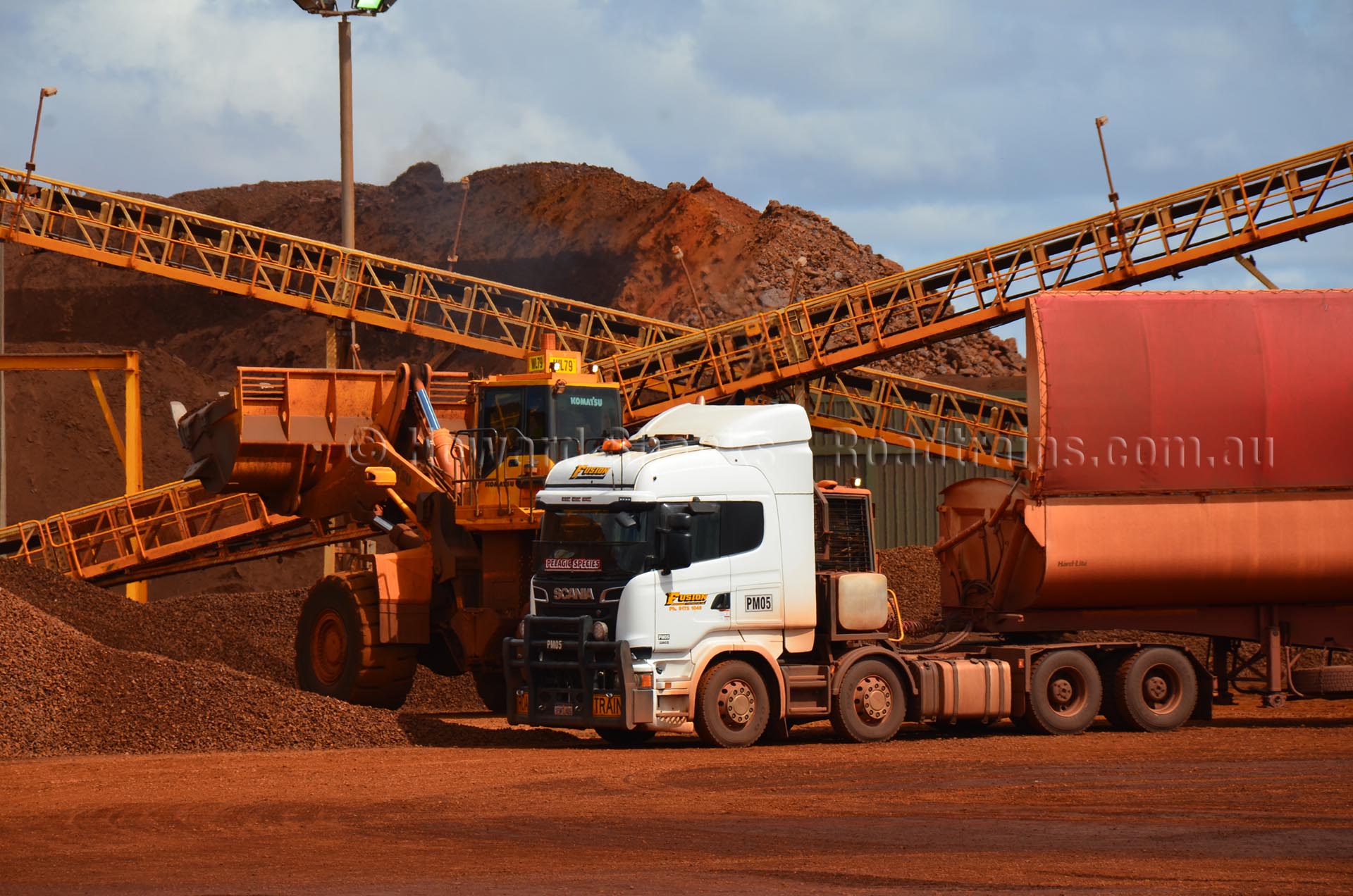 “Scania’s parts availability leaves a lot to be desired,” Jon added. “Don’t get me wrong they (Scania Perth) really try and look after us, but there have been a few times we’ve had to wait a week or more for parts to come from Sweden and that chips away at the bottom line. At the end of the month if another truck uses 10-15 litres more fuel but we have better utilization then that is something we have to look at when we next make our purchase decision and that would be a pity because Scania don’t carry enough spare parts to thoroughly back what is shaping up to be durable product.”

“Also when the truck is parked up waiting for parts my drivers are missing out on shifts. It’s a serious problem,” Jon emphasized. “Because if they miss too many shifts the good drivers are poached by other companies and good drivers are too hard to find theses days,” Jon exclaimed.

“Look I take my hat of to Scania for getting behind the mining industry and bringing something different to the market,” Jon said. “Our Scanias have around 400,000 kilometers and we’re just ironing out all the bugs. Sure there have been few little hick-ups but no more than we’ve had with any other brand and they’re doing a great job with high driver acceptance.”

As to how well the new R730 Scania’s are performing? Well according to both Jon and Richard they’re ticking all the right boxes and the same goes for their economy. Are they delivering the critical savings to the bottom line? It may be too early to tell, but they’re still working when other operators have had to park up their trucks, which is positive sign. 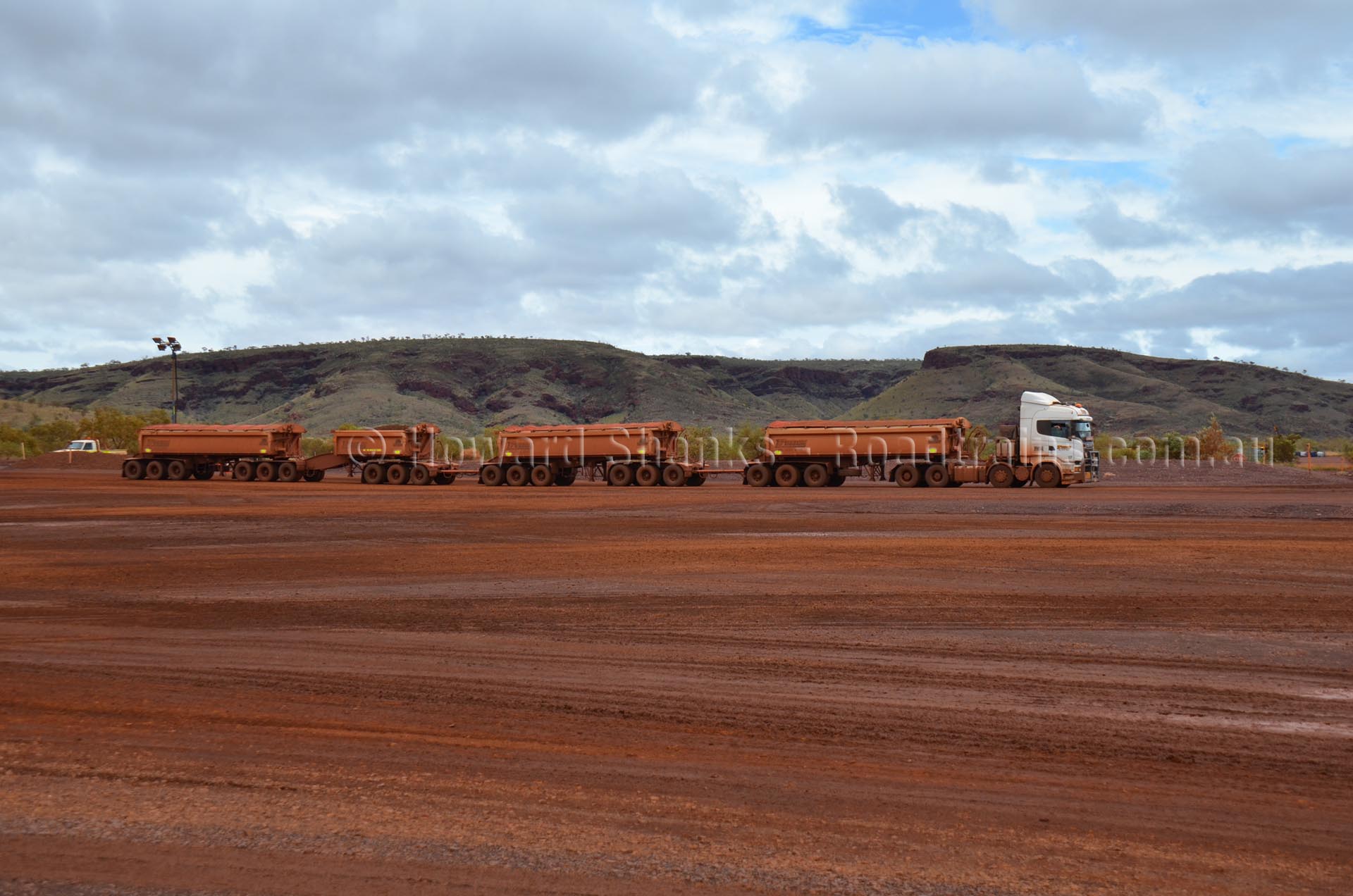