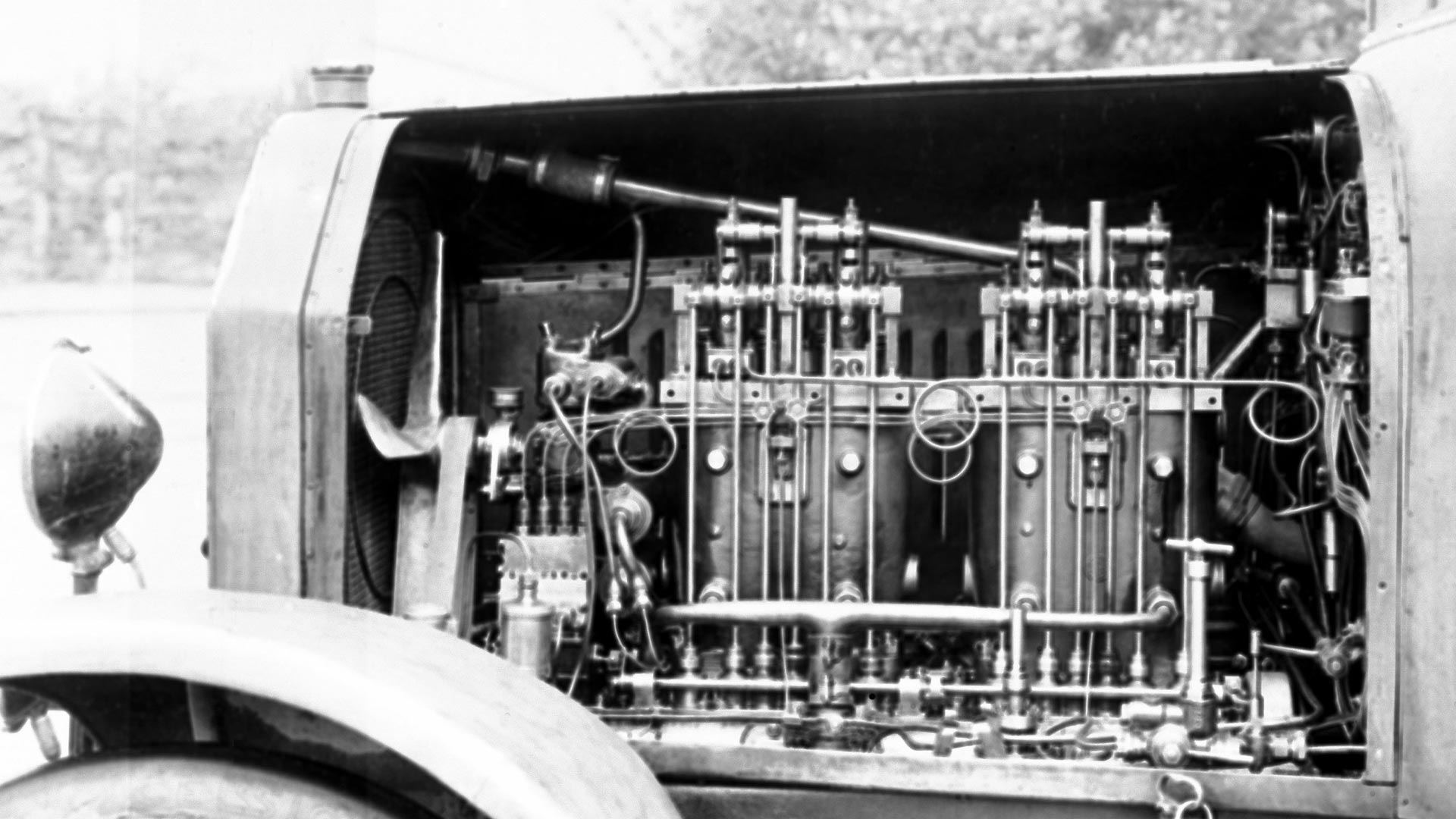 In 1923 Benz & Cie. presented the first diesel truck to the world. A four-cylinder diesel OB-2 engine with an output of 33 kW (45 hp) at 1000 rpm powered the five-tonne truck. When compared with a petrol-driven truck of the same design, the efficiency of the diesel truck was immediately impressive. Compared with the petrol engine, the diesel engine achieved fuel savings of 86 per cent. Work on the new truck engine began in 1922. The first complete engine assembly of ran on the test stand in September of that year. The initial engine production consisted of ten OB-2 engines. 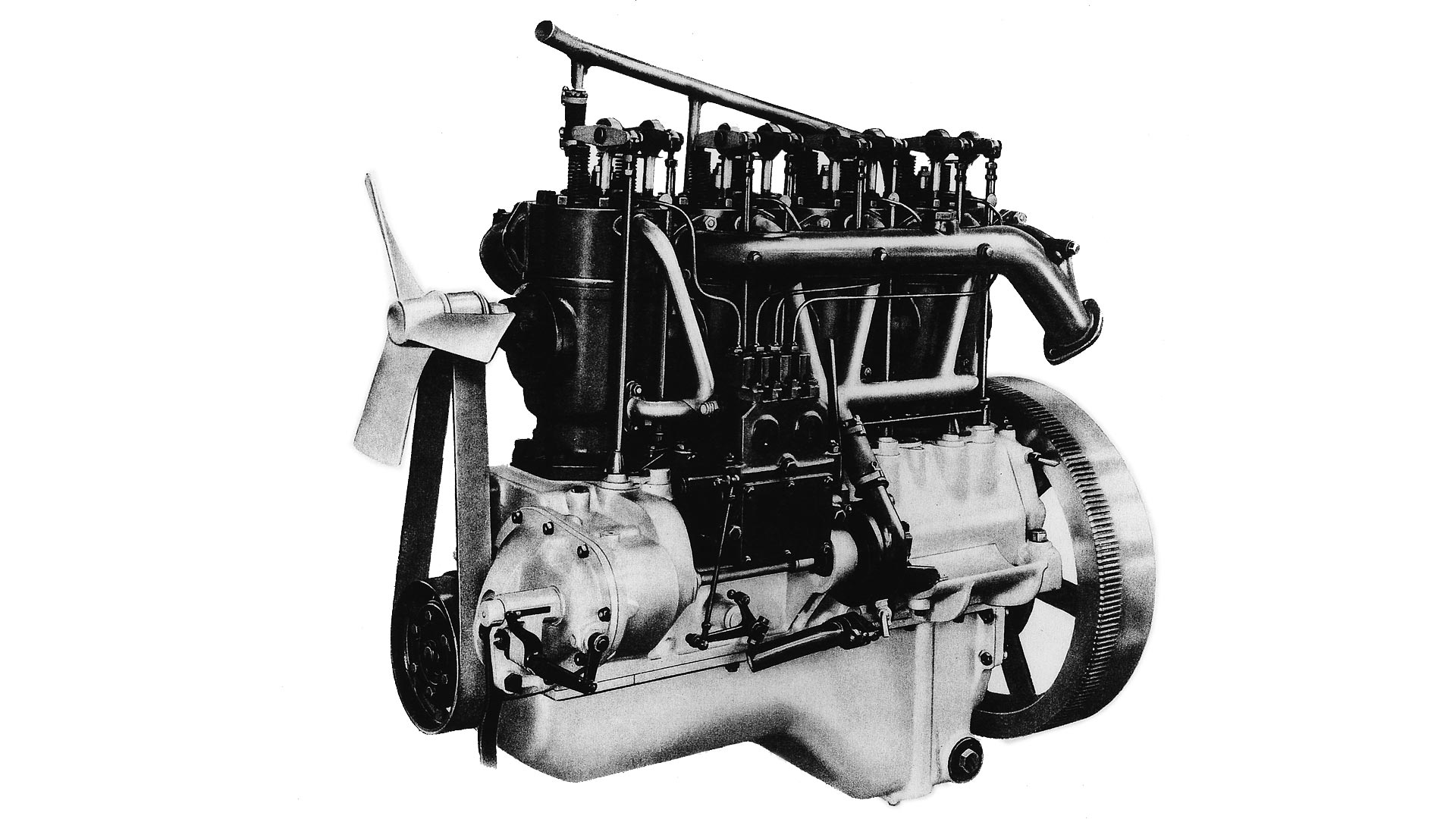 The first test drive commenced in the challenging, hilly area around Gaggenau on 10 September 1923. The engineer’s report assessed the vehicle as follows: “The favourable consumption is particularly impressive: supplied with brown coal tar oil, the OB-2 requires around 25 per cent less than a petrol engine with the same power.” The sensationally low fuel costs were due to the fact that tar oil was cheaper than petrol. And in addition to the tar oil, the new engine could also be “driven with gas oil, kerosene, Texas oil and yellow or brown paraffin oil”, as Benz & Cie advertised the frugal engine in 1923.

The Benz engineers chose the chassis on the Benz 5K3 truck, designed for a payload of five tonnes. During the test drives, the OB-2 diesel engine proved itself to such an extent that on 14 April 1923, that management decided the engine would go into series production. The pre-chamber OB-2 diesel engine could output 37 kW (50 HP) at 1000 RPM. 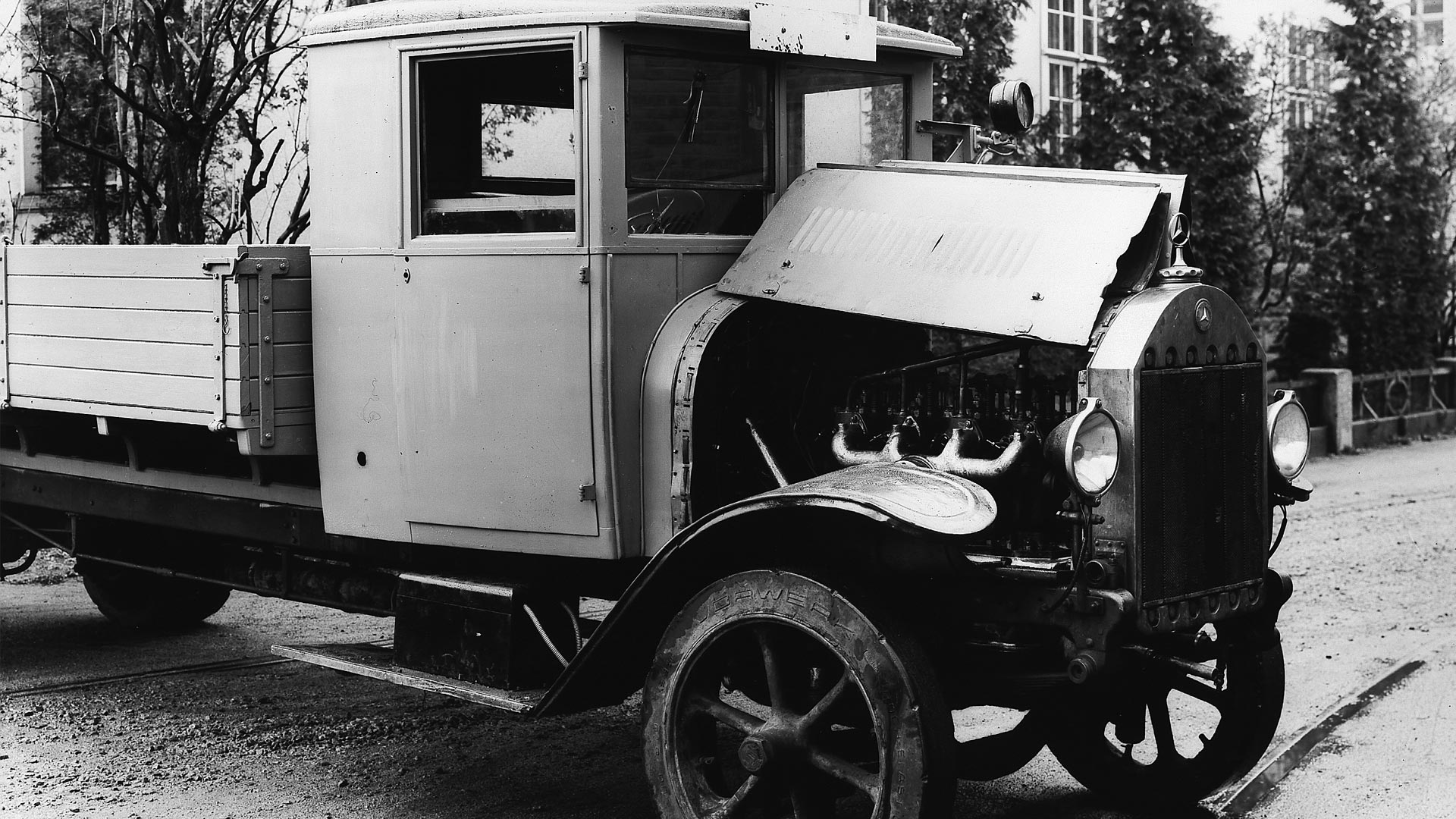 In 1911 Daimler-Motoren-Gesellschaft began the development of a compact diesel engine for commercial and agricultural purposes. While Benz & Cie. were developing the diesel truck, Daimler-Motoren-Gesellschaft (DMG) in Berlin-Marienfelde was building an air-injection diesel engine designed for fitment in a truck that boasted almost the same power. The finished product was a four-cylinder engine with a power output of 29 kW (40 HP) at 1000 RPM. The engine proved its road capability during a series of test drives in 1923. At the time, the long-distance drive between the two DMG plants was particularly spectacular. The Daimler diesel truck drove from Berlin to Stuttgart and back from 20 to 30 September 1923. Following these tests that drew a great deal of publicity due to the then enormous distances, the first Daimler 5C commercial diesel vehicles produced in Marienfelde – a truck, a three-sided tipper, and a bus – were presented at the beginning of October 1923 at the Berlin automobile exhibition. 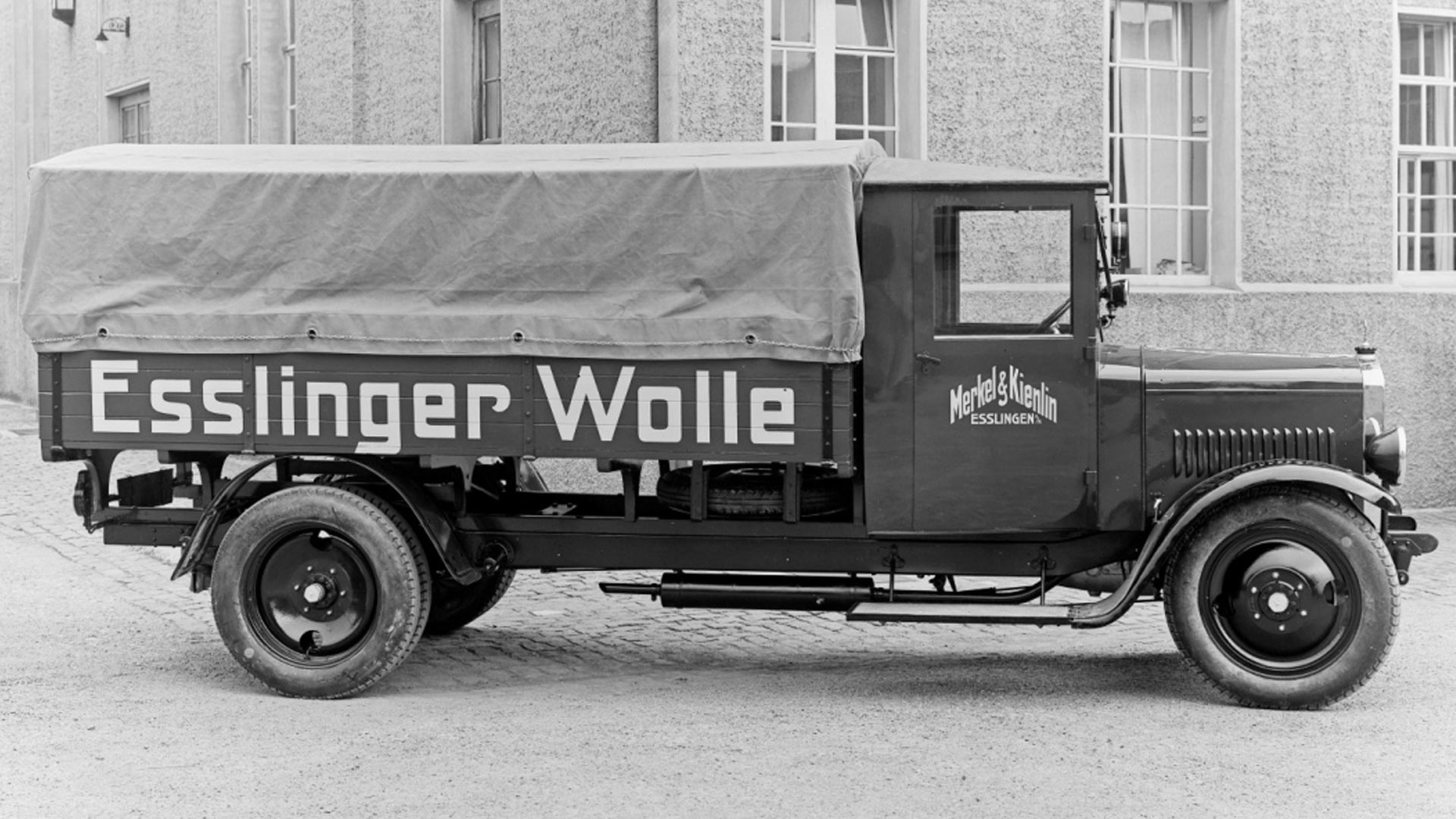 The pre-chamber diesel engine prevails from 1927 at the newly merged Daimler-Benz AG.

Following the merger of Benz & Cie. and DMG in 1926, Benz’s pre-chamber principle prevailed against the air-injection diesel engine. Thus, the first jointly developed pre-chamber diesel engine was the six-cylinder OM5 engine from 1927 (55 kW/75 HP with a displacement of 8.6 litres). The abbreviation OM for diesel engines comes from “oil engine” and is still used today by Mercedes-Benz.

Customers could specify the Mercedes-Benz L5 truck with either the new OM5 diesel engine (51 kW/70 HP at 1300 rpm) or a petrol engine, type M36 (74 kW/100 HP at 2000 rpm). The five-tonner (available with a low frame as N5) was the only model with a diesel engine included in the new Mercedes-Benz commercial vehicle range offered in 1927. Both the 1.5-tonne and 3.5-tonne vehicles were initially only available with petrol carburettor engines. Such was Mercedes-Benz’s reaction to its customers’ great scepticism of the diesel engine.

The OM5, which went into series production in 1928, was fitted with the new Bosch injection pump. Robert Bosch had begun working on the diesel injection pump in 1922. In 1927 the systematically improved injection technology was presented and contributed to the acceptance of the diesel drive. Bosch himself was convinced of the diesel engine’s superiority: in 1924, he was one of the first customers to order a diesel truck from Benz & Cie. 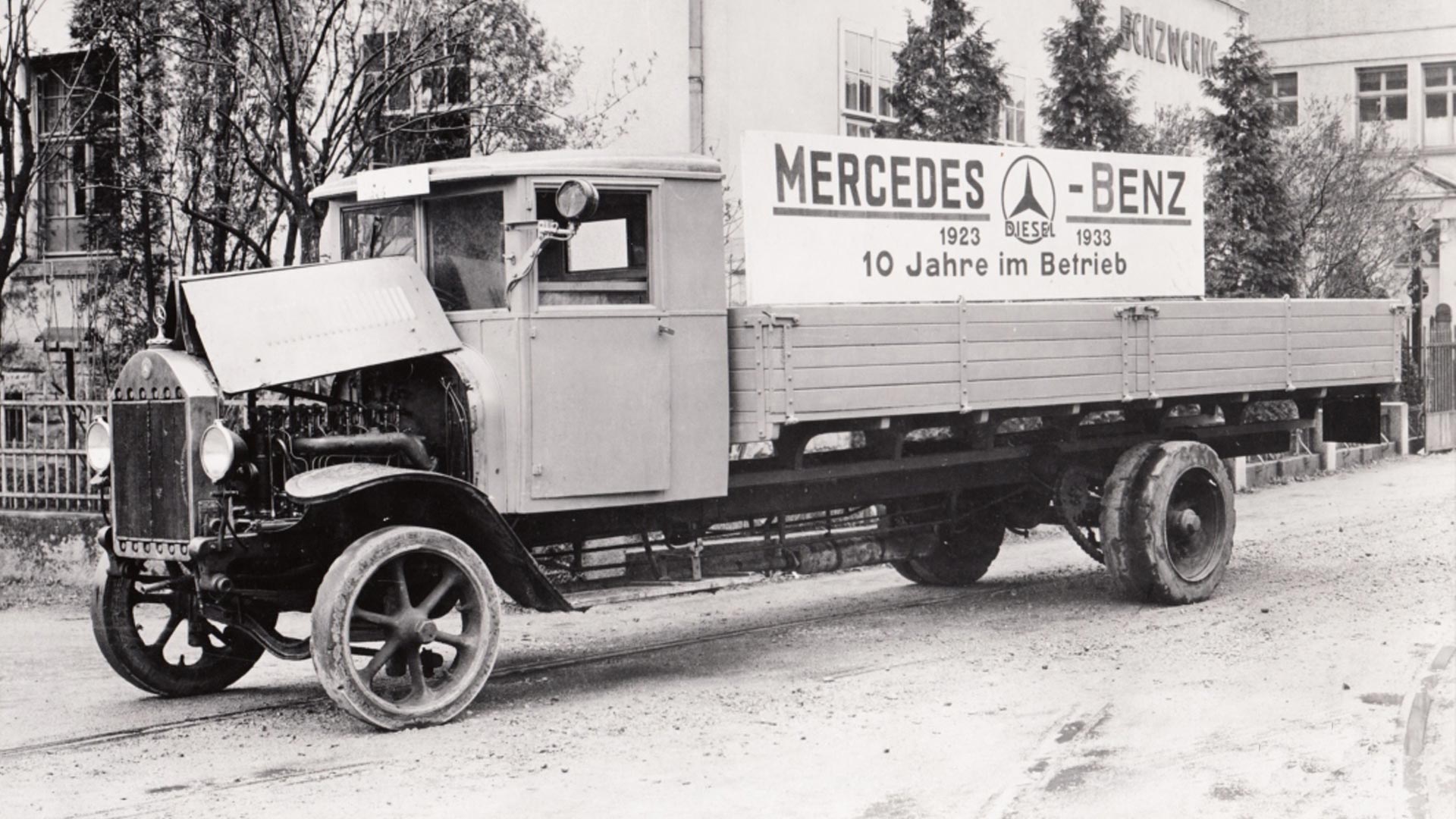 Initially, sales were stagnant because opponents of the new truck design criticised the loud and harsh running of the diesel engine. But, yet again, a positive response came from England. In June 1928, a new 5-tonne diesel truck arrived at British Mercedes-Benz Ltd. “Commercial Motors”, a specialist magazine of the time, praised the characteristics of the Mercedes-Benz truck in five consecutive issues. Then in the autumn of 1928, the Royal English Automobile Club awarded Daimler-Benz AG the Dewar Trophy, which was presented annually for special performances in the field of motor vehicle construction.

In an attempt to promote the 5-tonne diesel truck, because it was still unknown in many parts of Germany, it commenced a propaganda drive – today, we would say “marketing drive”. In the summer of 1929, the new 5-tonne diesel truck began a journey through all of Germany, commencing in Leipzig. Then the truck travelled from the North Sea up through the Alps then traversing the Ruhr region to the Lausitz district in the East. Meantime, Mercedes-Benz presented the benefits of the new diesel truck to the salespeople in dealerships and agencies. Also, the diesel truck was loaned to waggoners and others who were interested in a test drive. The regional and specialist press also used the opportunity to report on the new and innovative drive technology in detail.

Gottlieb Daimler and Carl Benz laid the foundation for the modern transport industry more than 125 years ago. Over the past decades, Daimler’s truck and bus divisions have consistently set standards for the entire transportation industry regarding safety, fuel efficiency, and driver and passenger comfort. It is now time for the next evolutionary step: emission-free, automated and connected driving. Daimler Trucks & Buses is working to bring these essential technologies to high-volume series production across brands, divisions and regions. In this way, the company intends to take a significant step closer to realising its vision of CO2-neutral transport and accident-free driving whilst also contributing to the sustainability of global transport of goods and passengers.