Little did farm boy, Clessie Cummins, from Indiana, realise his innovative invention of his technological advanced (for the time) PT fuel injection system in the early fifties would revolutionise diesel engine economy, efficiency and reliability. Nor did he ever envisage that it would endure seven decades of production. Cummins patented the PT (pressure-time) fuel injection system in 1954.

Cummins engines introduced the pressure-time (PT) fuel system in 1951, which incidentally it was the first incarnation of a common rail injection system and used exclusively in their engines only. It replaced another Cummins invented fuel system, known as the “Double-Disc” system. The newer PT system featured a much simpler design and required fewer moving parts than the double-disc system. The “P” referred to the actual fuel pressure produced by the gear pump and maintained at the inlet to the injectors. The “T” refers to the exact “time” available for the fuel to flow into the injector assembly, determined by the engine speed as a function of the engine camshaft and injection train components.

From 1980 through to the early ’90s, Cummins led the on-highway heavy vehicle market (in the greater than 200HP segment) worldwide by outselling all other manufacturers using their Cummins PT fuel system.

However, by the early nineties, it became apparent that the mechanical PT system would not achieve certification under the upcoming stringent emissions standards. Consequently, the original PT system received partial electronic control. But in 1997, Cummins introduced a fully electronic EUI fuel management system they marketed as CELECT, found on the famous redhead engine models.

The release of the original Signature engine in 1998 saw a return to the original PT system concept, but now with complete computer control, called the HPI-TP (High-Pressure Injection – Timed Pressure) system. The HPI-TP system managed the hydraulic fueling equation by holding the flow area constant, the pressure value constant, and the time factor as the control variable, and it still employees these principals today in the XPI fuel system. 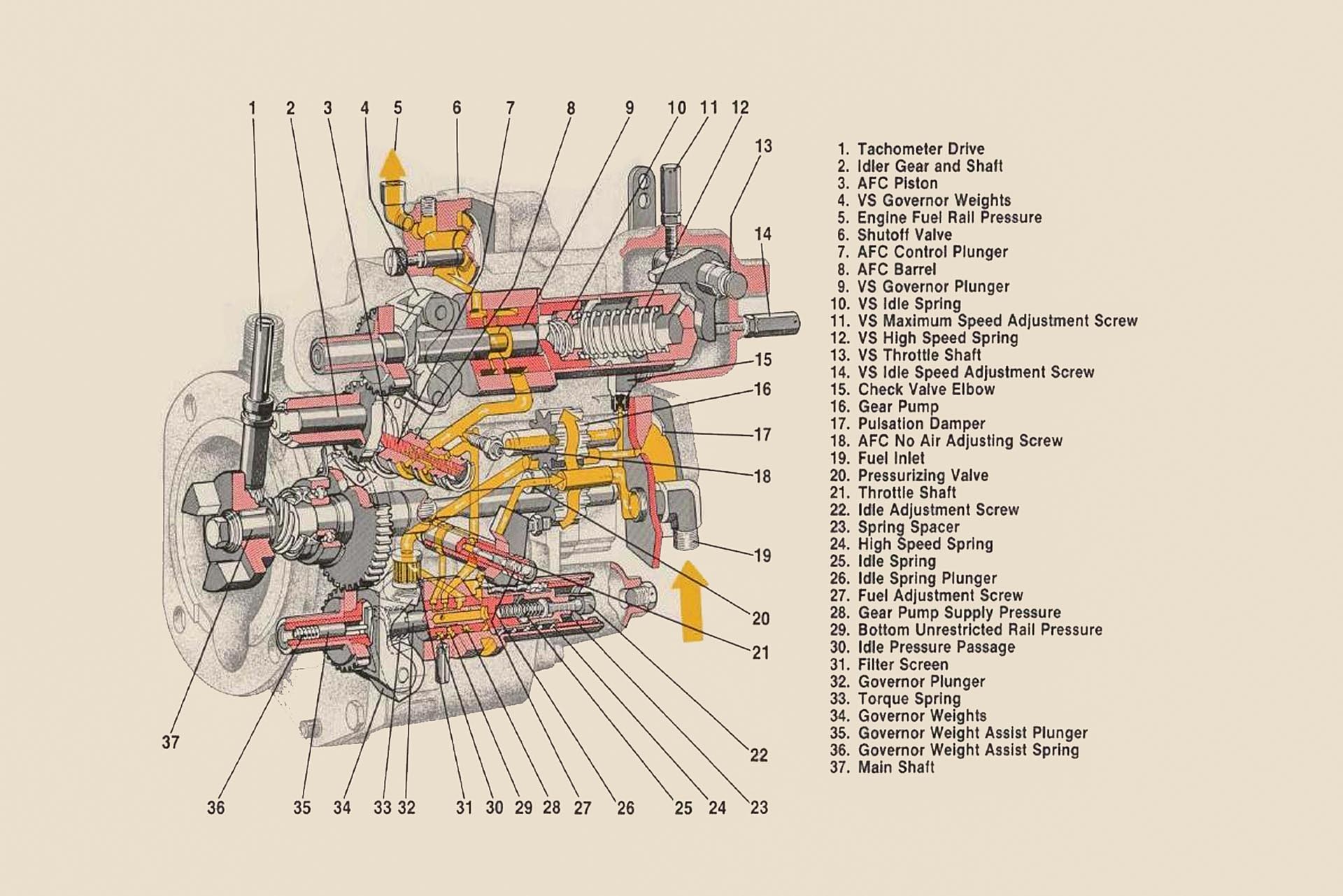 The PT system relies on injectors to meter and inject the fuel into the cylinder with metering based on a pressure-time principle. The interval determines the time for metering that the metering orifice of the injector stays open. This interval is ascertained and controlled by the engine speed, which determines the rate of camshaft rotation and consequently the injector plunger movement. Fuel pressure gets supplied by a gear-driven positive displacement fuel pump.

Because Cummins engines are all four-cycle, the camshaft gets driven from the crankshaft gear at one-half of engine speed. Consequently, the fuel pump rotates at engine speed. Due to this relationship, additional governing of fuel flow is required in the fuel pump. 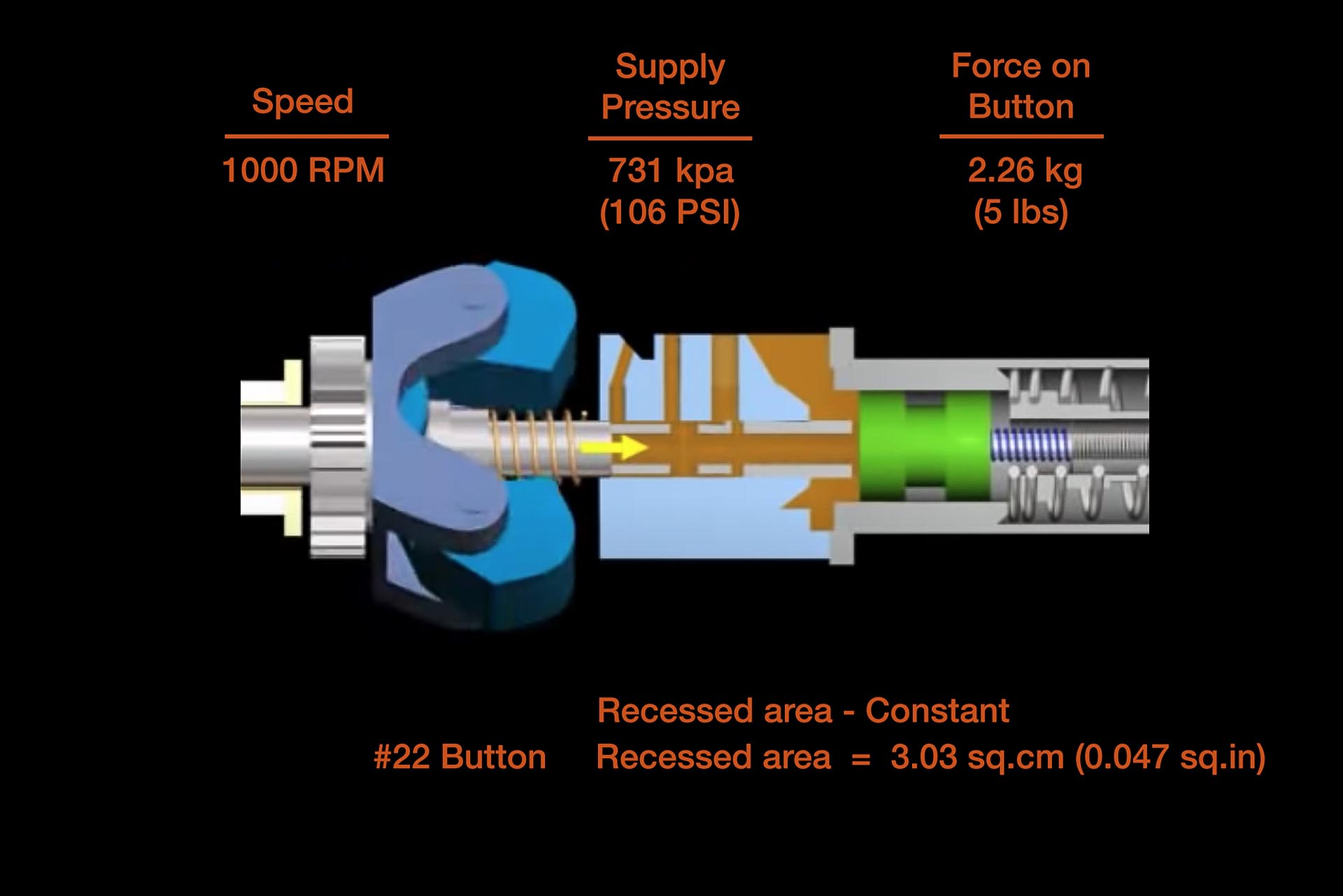 A mechanical centrifugal governor controls the fuel pressure and engine torque throughout the entire operating range. It also manages the engine’s idling speed and averts engine over-speeding while in the high-speed range. The throttle shaft is fundamentally a shaft with a hole; therefore, the alignment of this hole with the fuel passages determines the pressure at the injectors.

A sole low-pressure fuel line serves all injectors; therefore, the amount of metered fuel and pressure to all cylinders are the same.

There are three main advantages of the PT fuel system’s fuel-metering operation: 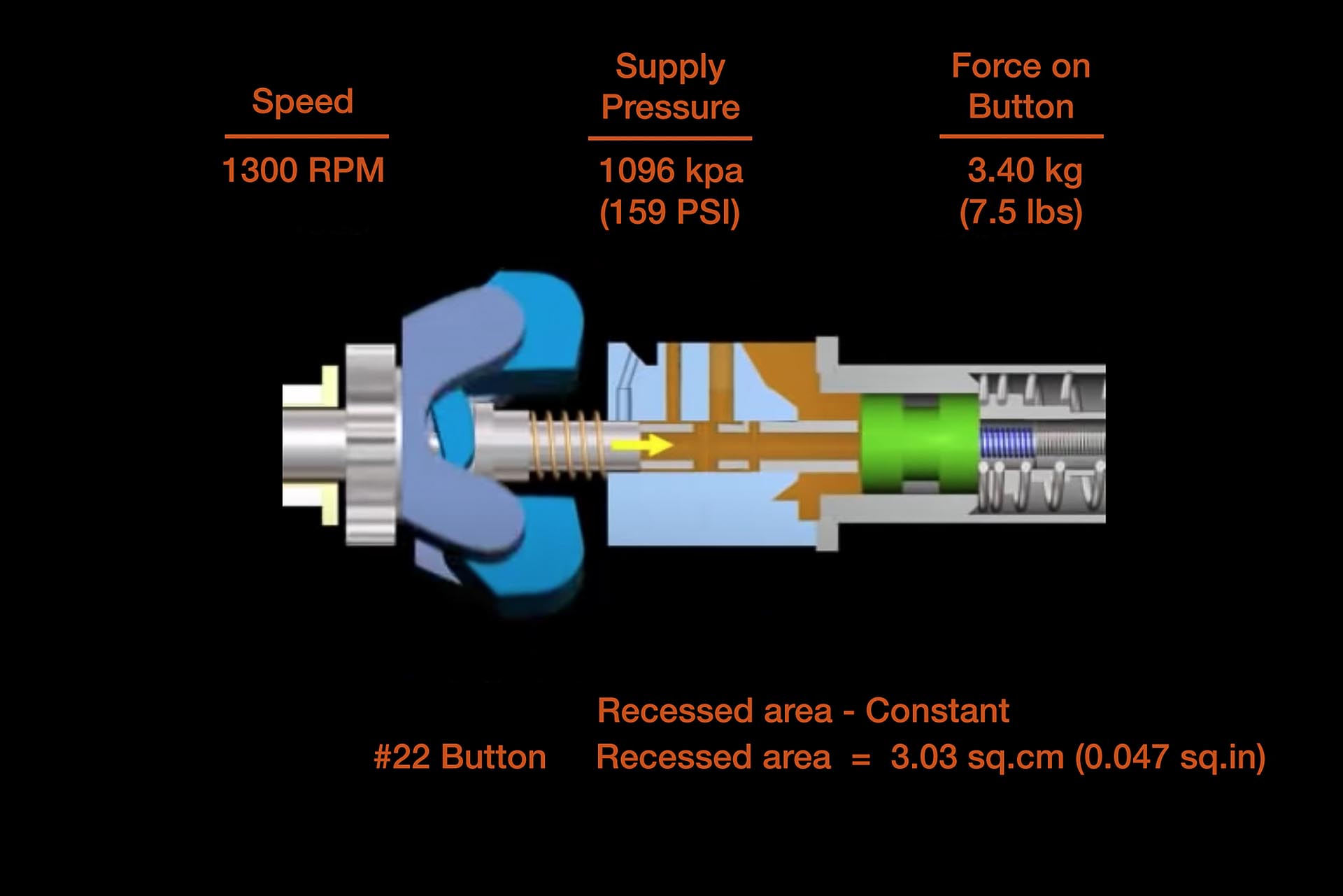 The fuel pump commonly used in the Cummins PT Fuel System incorporates a governor and an air-fuel control attachment.

The air-fuel control (AFC) is an exhaust smoke control device that is primarily used during acceleration and is incorporated internally in the pump body. The AFC unit is intended to limit fuel flow in direct relationship to the air intake manifold pressure when the engine accelerates, is under load, and during lug-down conditions, thus reducing the amount of black smoke.

Within the pump body, a fuel pump bypass button of varying sizes is fitted to influeance the maximum fuel supply pressure of the gear-type pump before it opens and bypasses fuel back to the inlet side of the pump. The effects of changing the button size on the supply pressure are visible in the chart. Consequently, it is relatively easy to alter the horsepower setting of the engine. 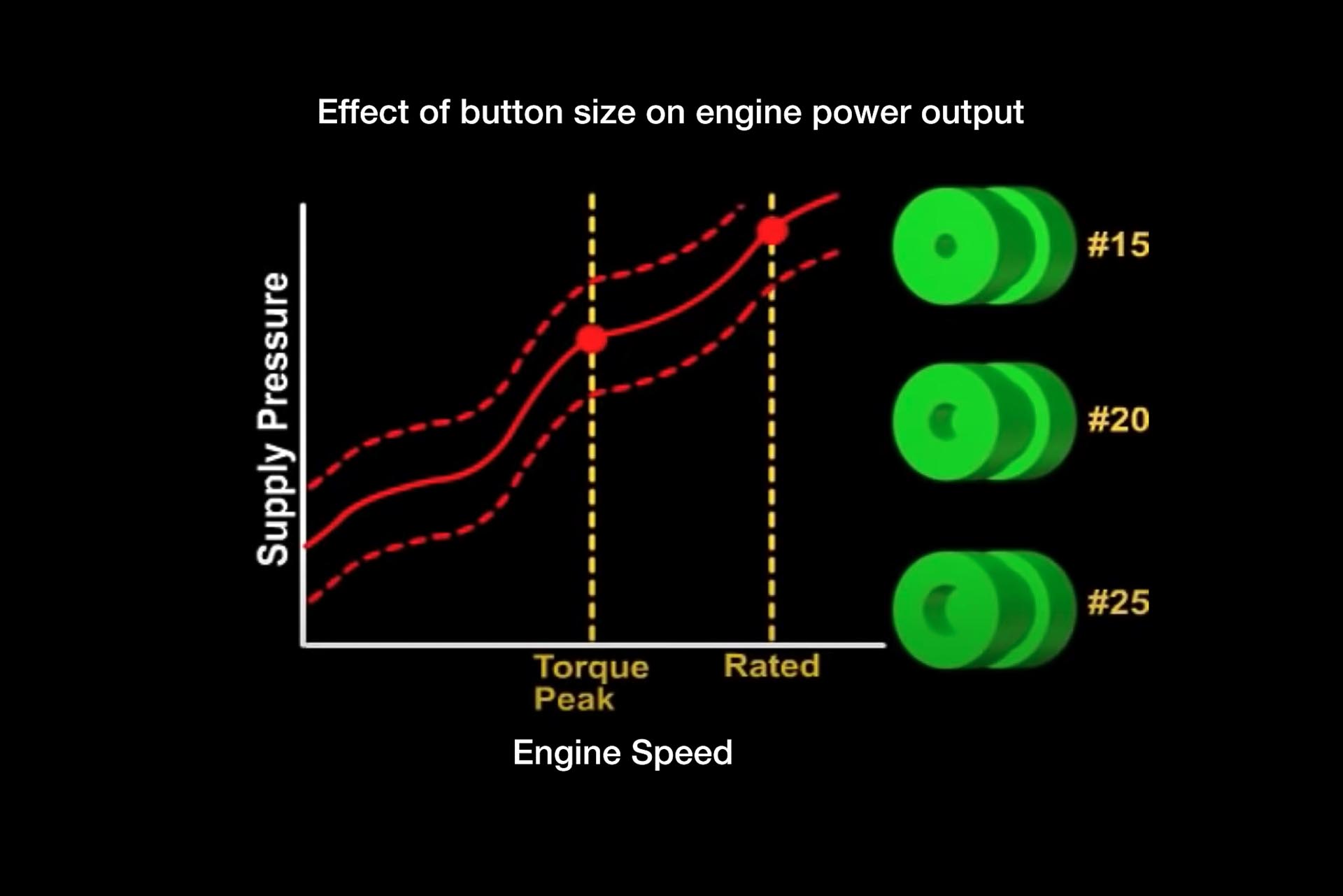 The primary functions of the PT fuel pump construction are as follows:

The principal fuel flow into and through the PT pump assembly will vary slightly depending on the actual model. 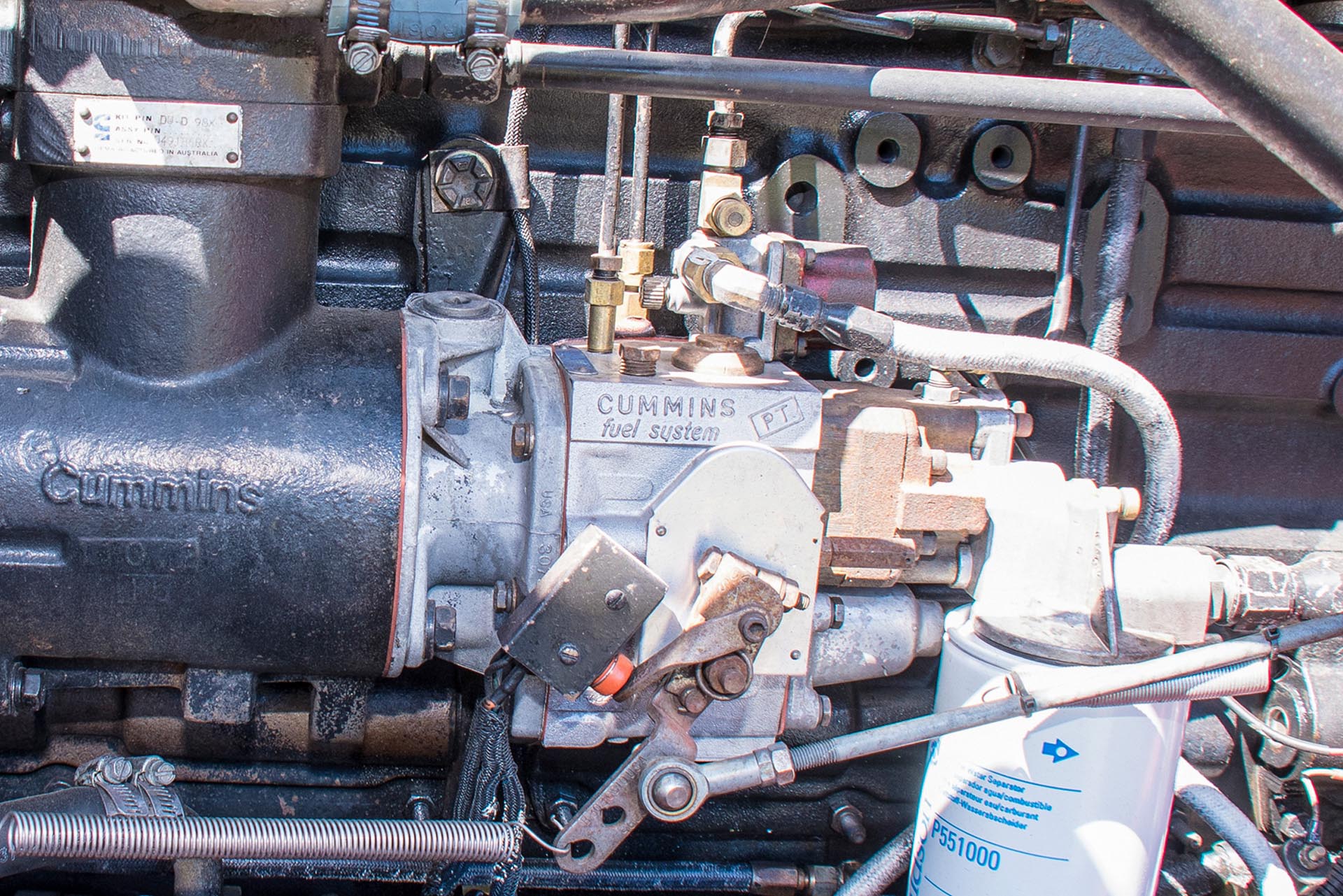 A simplified fuel flow is as follows; Fuel is drawn from the diesel tank by the integral PT gear pump through the fuel supply line into the primary filter when the engine cranks. This filter is typically a filter and water separator. Fuel flows from the fuel filter through a small filter screen located in the PT pump housing and then down into the internal governor casing.

The location of the AFC control plunger within the AFC barrel regulates how much throttle fuel flows into and through the AFC unit then onto the engine’s fuel rail, which fills the fuel rail.

The AFC plunger position is influenced by turbocharger boost pressure at the intake manifold, which is conveyed through the air passage from the intake manifold to the AFC unit. At engine start-up, boost pressure is especially low; therefore, flow is somewhat limited. Nevertheless, fuel under pressure flows through the electric solenoid valve, which is energised by power from the ignition switch. This fuel then travels through the fuel rail pressure line and into the injectors.

A proportion of the fuel from both the injectors and PT pump returns to the fuel tank to reduce the heat picked up from the pump’s internal components and the injectors during the cooling and lubricating process.

A unique PT injector is provided at each engine cylinder to spray the fuel mist into the combustion chambers. PT injectors are of a unit type design and operated mechanically through a plunger-type return spring and a rocker arm mechanism operating via the camshaft.

Incidentally the original mechanical fuel pump and injectors are still manufactured, in China, and found on engines powering generators and some Sino Trucks. 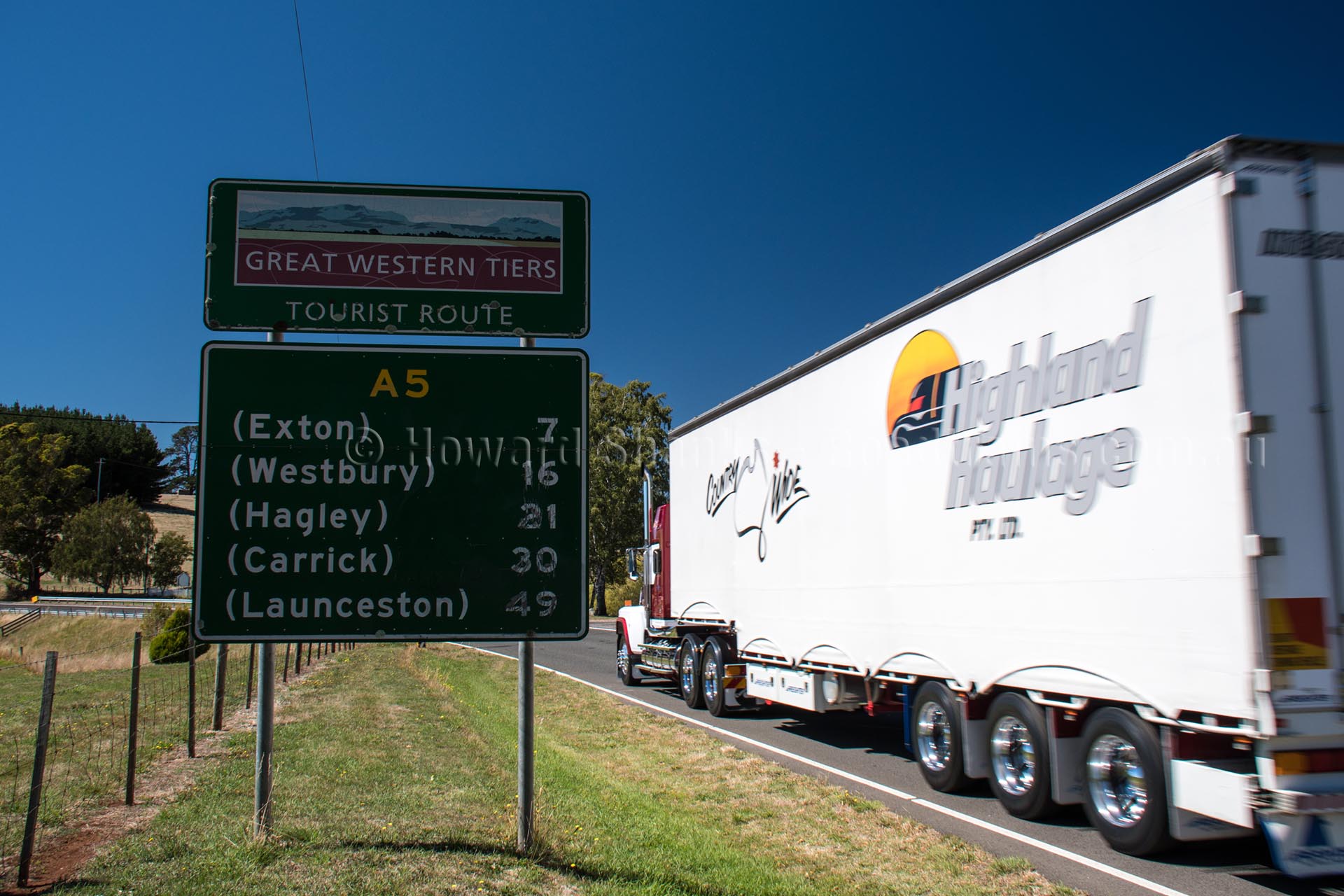 Cummins offers a more affordable and high-quality alternative to purchasing new parts through with their remanufactured-Not Rebuilt philosophy. Unlike other component rebuilders who merely “fix-what’s-broken” or “clean-and-calibrate,” Cummins ReCon fuel pumps and injectors are completely remanufactured. In fact, every ReCon fuel pump and injector is totally disassembled, thoroughly cleaned and carefully inspected using the latest technology. Rather than the abrasive, destructive cleaning processes commonly found in local rebuild shops, Cummins employs a five-step state-of-the-art ultrasonic cleaning process. This technology removes foreign matter without removing any metal. Because performance is directly related to precision, high resolution gauges measure tolerances within five millionths of an inch.

During Cummins dedicated remanufacturing process, individual components of parts that cannot be restored to Cummins exact specifications are scrapped and replaced with new Genuine Cummins Parts. This attention to detail delivers greater durability with critical wear parts such as bearings and seals replaced on every unit regardless of condition. Computer-controlled test stands guarantee precise calibration to the latest Cummins performance specifications.

How a truck DPF works