In trucking terms, the acronym DPF refers to the Diesel Particulate Filter used in the exhaust system of trucks built after 2009. Its purpose is to trap the particulate matter or soot produced from the engine and prevent it (down to 1-micron) from exiting the exhaust pipe. A poorly maintained or blocked PDF will cause an engine to derate. 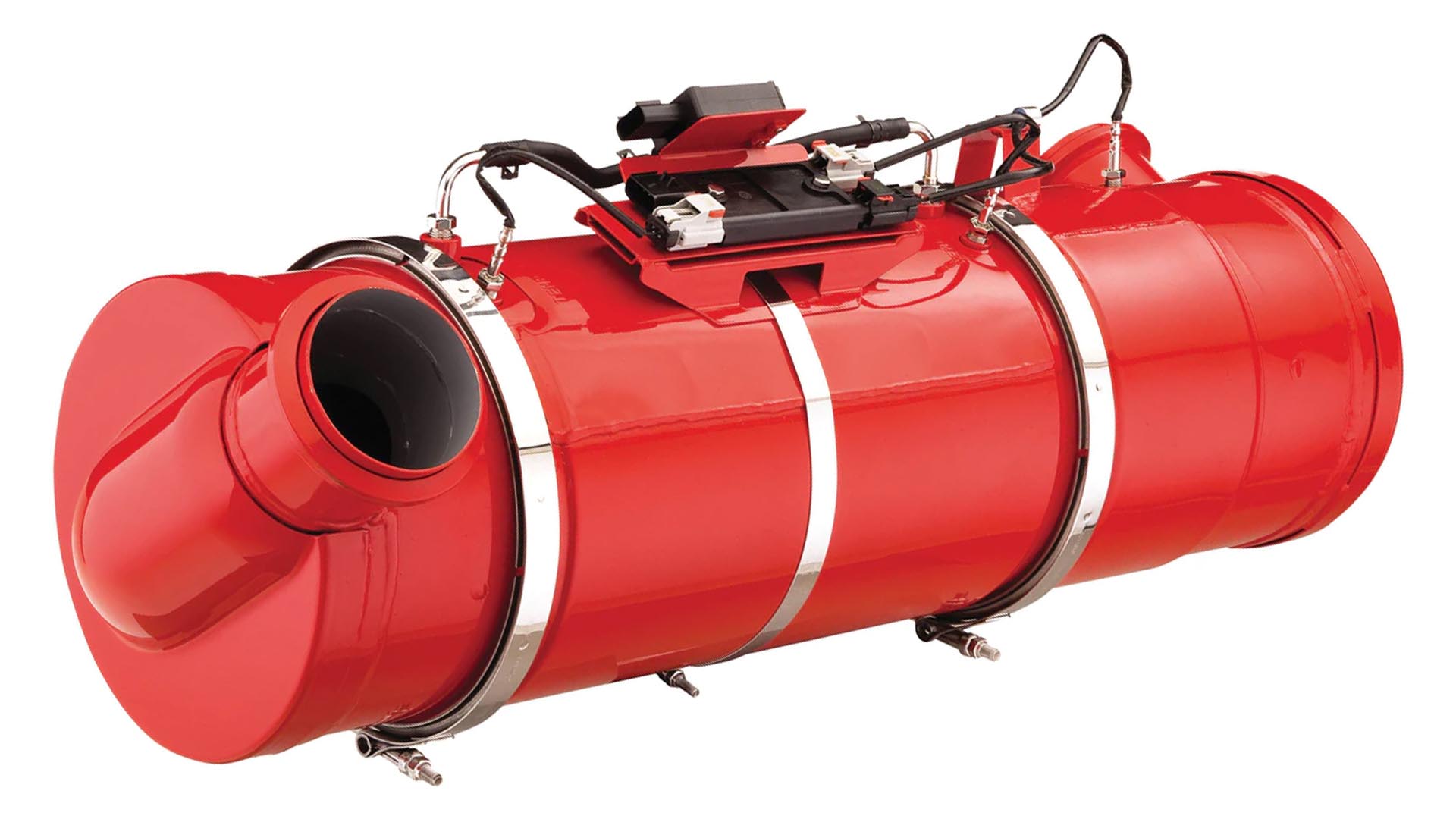 Vehicles with diesel engines manufactured after 2009 (Euro-V) must use either a DPF or Selective Catalysts Reduction (SCR) system. However, today with the introduction of Euro-6 compliant engines, we commonly see both these systems working together to reduce and remove all of the harmful NOx and particulate matter from the exhaust.

Not only does this technology help the environment, but it also creates a much cleaner operating engine. Today engine oil doesn’t get anywhere near as dirty or as quickly as it used to before the introduction of these systems. There are far fewer soot contaminants in engine oil nowadays, which means less gritty carbon deposits are forming in the oil galleys and other moving parts. Not only does this increases the life of the engine, but it has also meant engine oil change intervals are extended beyond 60,000kms using superior oils. And, the environment benefits too with cleaner air.

The DPF consists of a ceramic filter that has thousands of tiny channels in a honeycomb-shaped opening. A chemical catalyst layer that contains small amounts of precious metals, typically palladium or platinum, covers the inner honeycombed structure. Its purpose is to trap the particulate matter or soot produced from the engine and prevent it (down to 1-micron) from exiting the exhaust pipe. 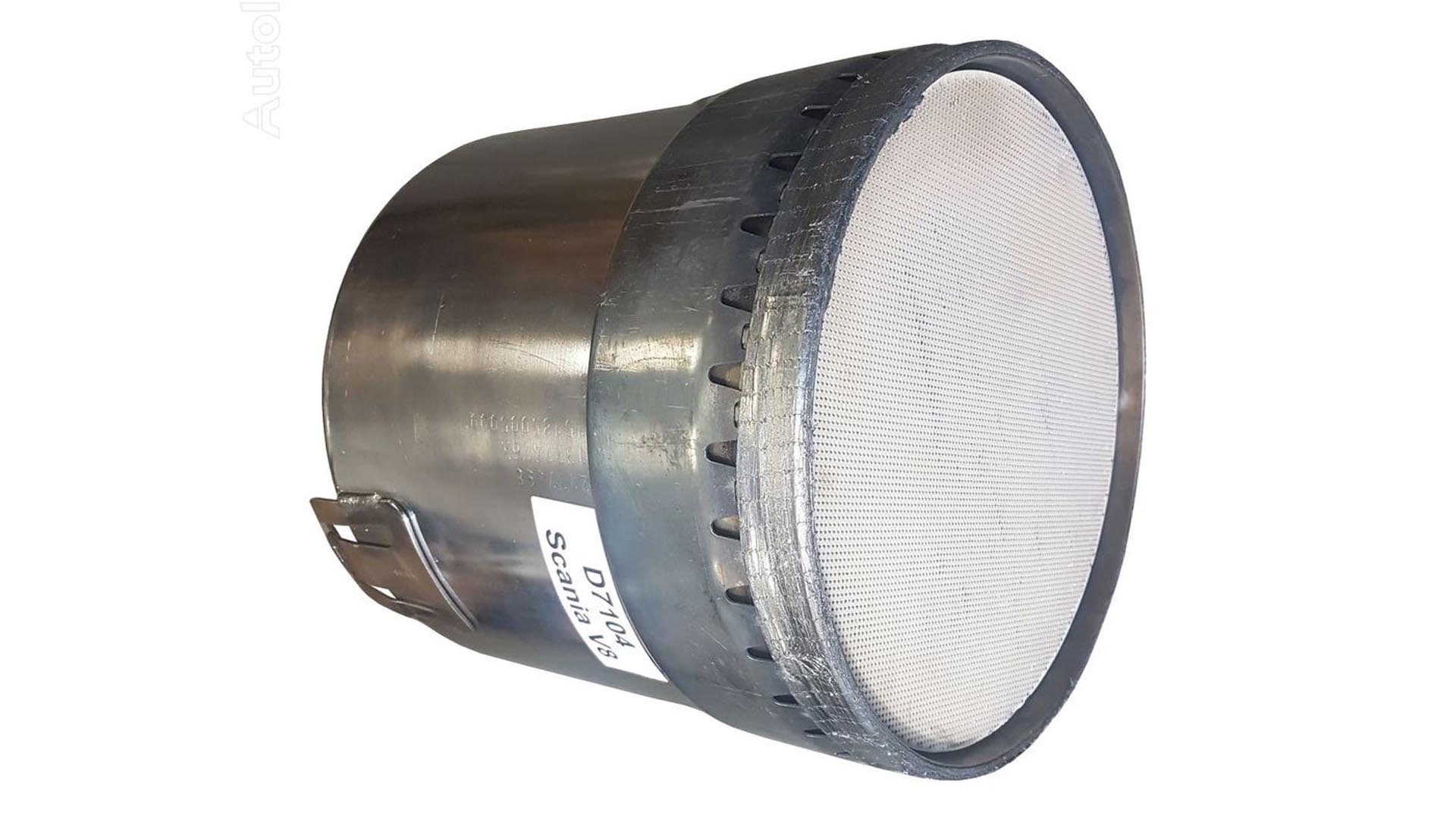 In order to minimise the soot or particulate matter from the exhaust, you need to raise the combustion chamber temperature high enough to reduce the soot from forming, and typically this is achieved when the engine is working under load. However, on the other hand, very high combustion temperatures are not all good news. If, for instance, the combustion temperatures exceed 1,800°C, then NOx is formed. The amount of oxide created also depends on the temperature and the length of time the heat is applied. This condition is even worse for the environment than the soot. 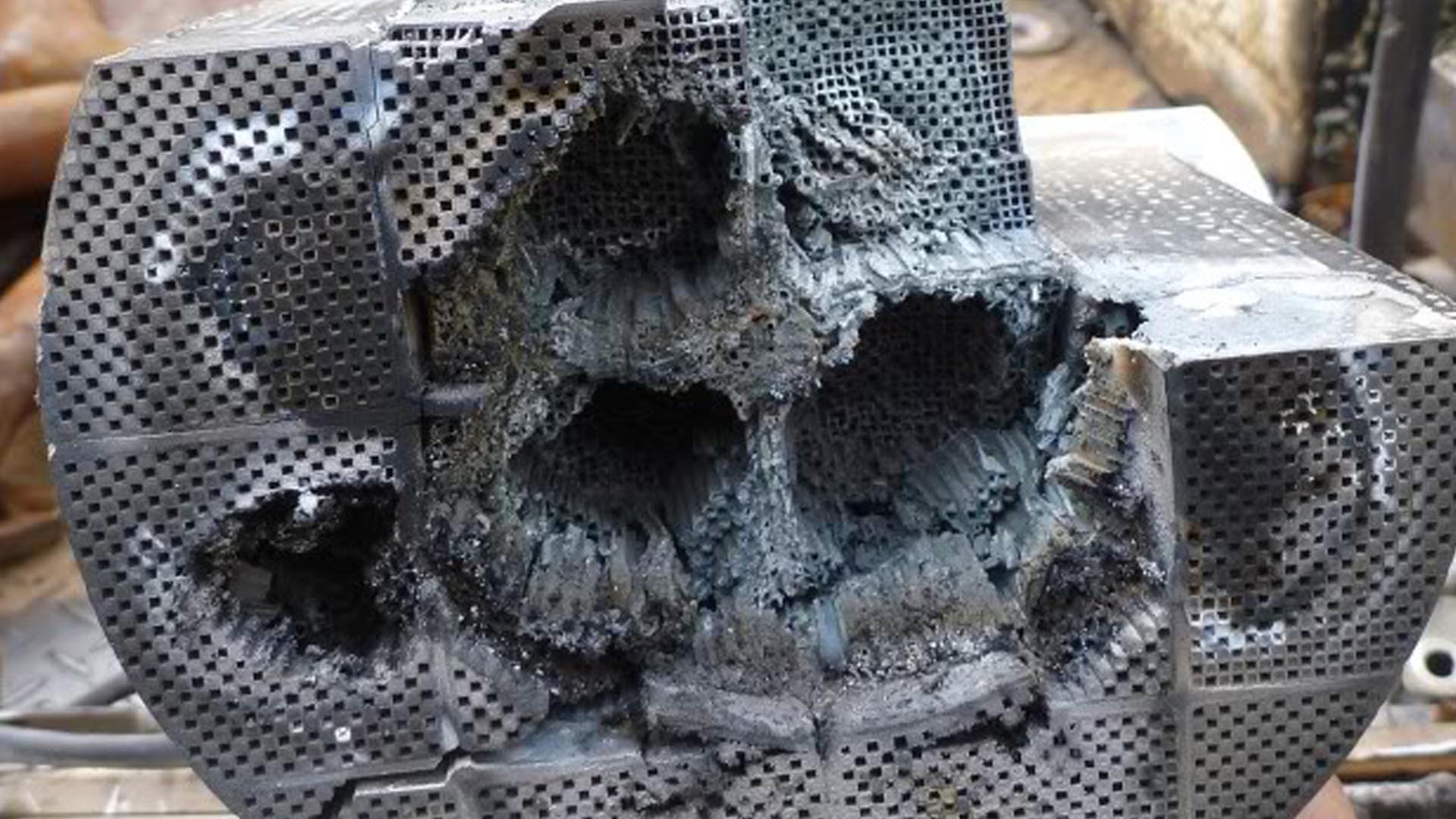 Consequently, the DPF requires regular cleaning. This procedure of cleaning the DPF is known as the regeneration process or “regen-burn”. Various manufacturers use several different methods to clean the DPF. The most common regeneration processes are; Active, Passive or Forced regeneration.

Regeneration will only happen when the conditions are within the engine manufacturer’s pre-set specifications. However, in general, most regeneration cycles are performed without the driver knowing this is taking place. The regeneration cycle occurs by raising the temperature of the DPF to around 600°C, and when enough oxygen is provided directly to the DPF. Some regeneration systems will inject additional fuel into the cylinder on the exhaust stroke. This process effectively propels hot gasses into the oxidation catalyst of the DPF, thereby raising the temperature sufficiently to instigate the carbon to react with the excess oxygen provided. Meanwhile, other systems rely on a heating element just before the DPF to raise the temperature. 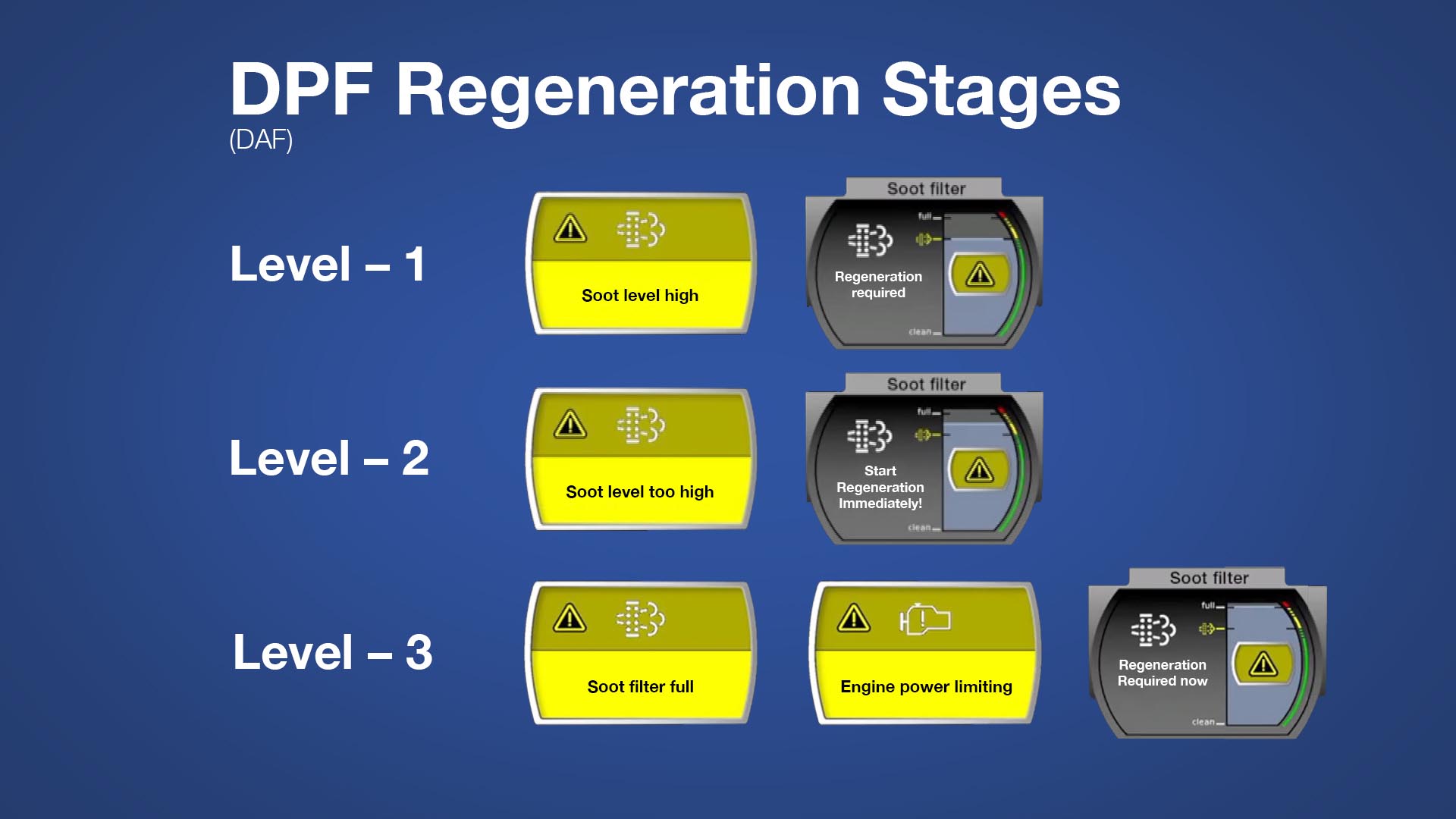 Active regeneration occurs when the engine duty cycles don’t generate enough heat to convert all of the carbon collected in the DPF, such as with stop-start metro delivery applications or excessive engine idle. The Engine Control Module (EMC) will initiate an Active Regeneration cycle. In these cases, the engine injects a small amount of diesel into the exhaust stream, generating heat as it enters the filter. This additional heat ensures that excess carbon oxidises without any driver intervention. 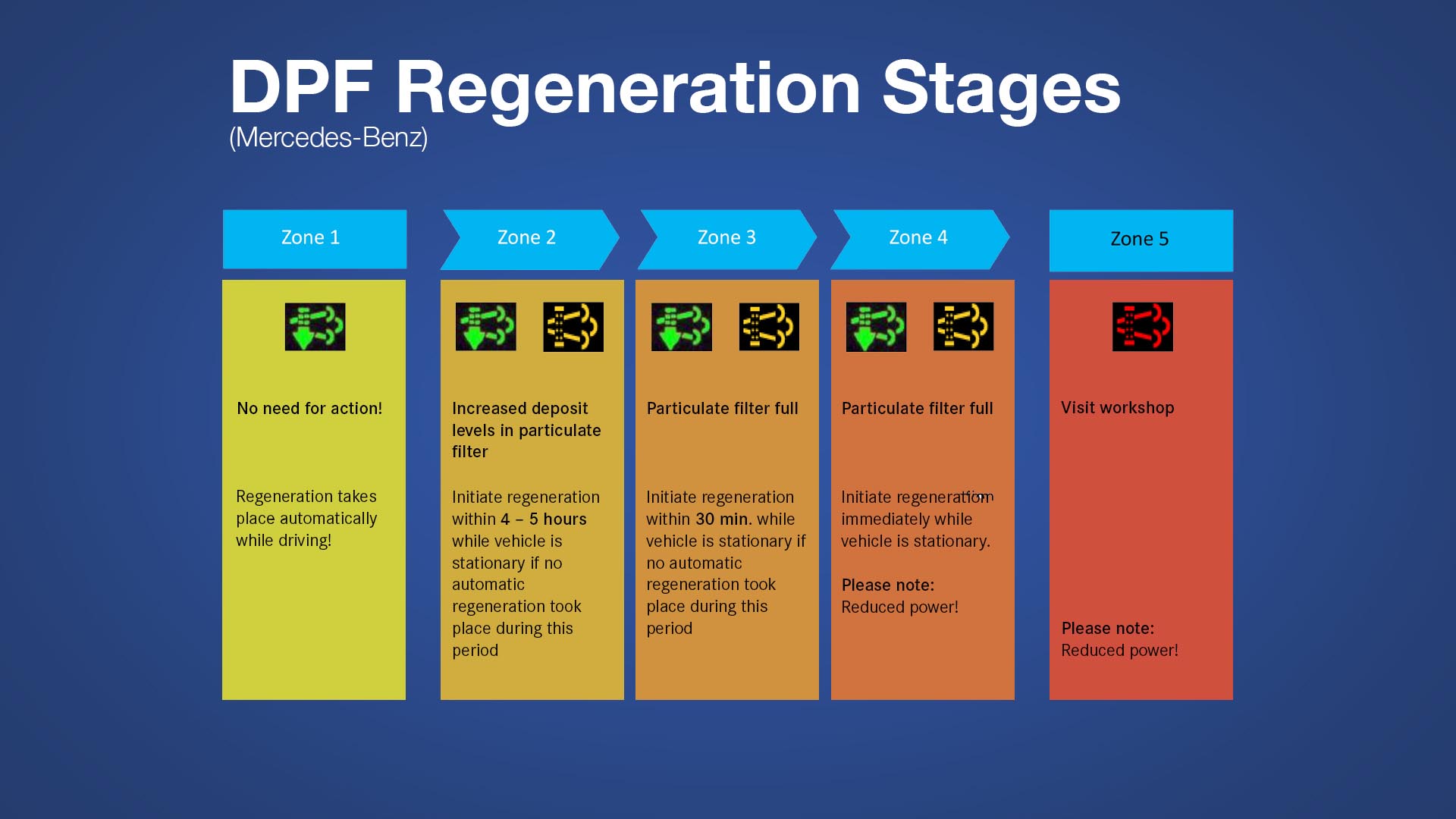 Initiating a Forced or Manual Regeneration is triggered by the driver via a dash-mounted switch in the cab. This process is required on rare occasions due to unusual duty cycle conditions or when the DPF lamp illuminates to indicate the soot loading in the DPF is increasing. 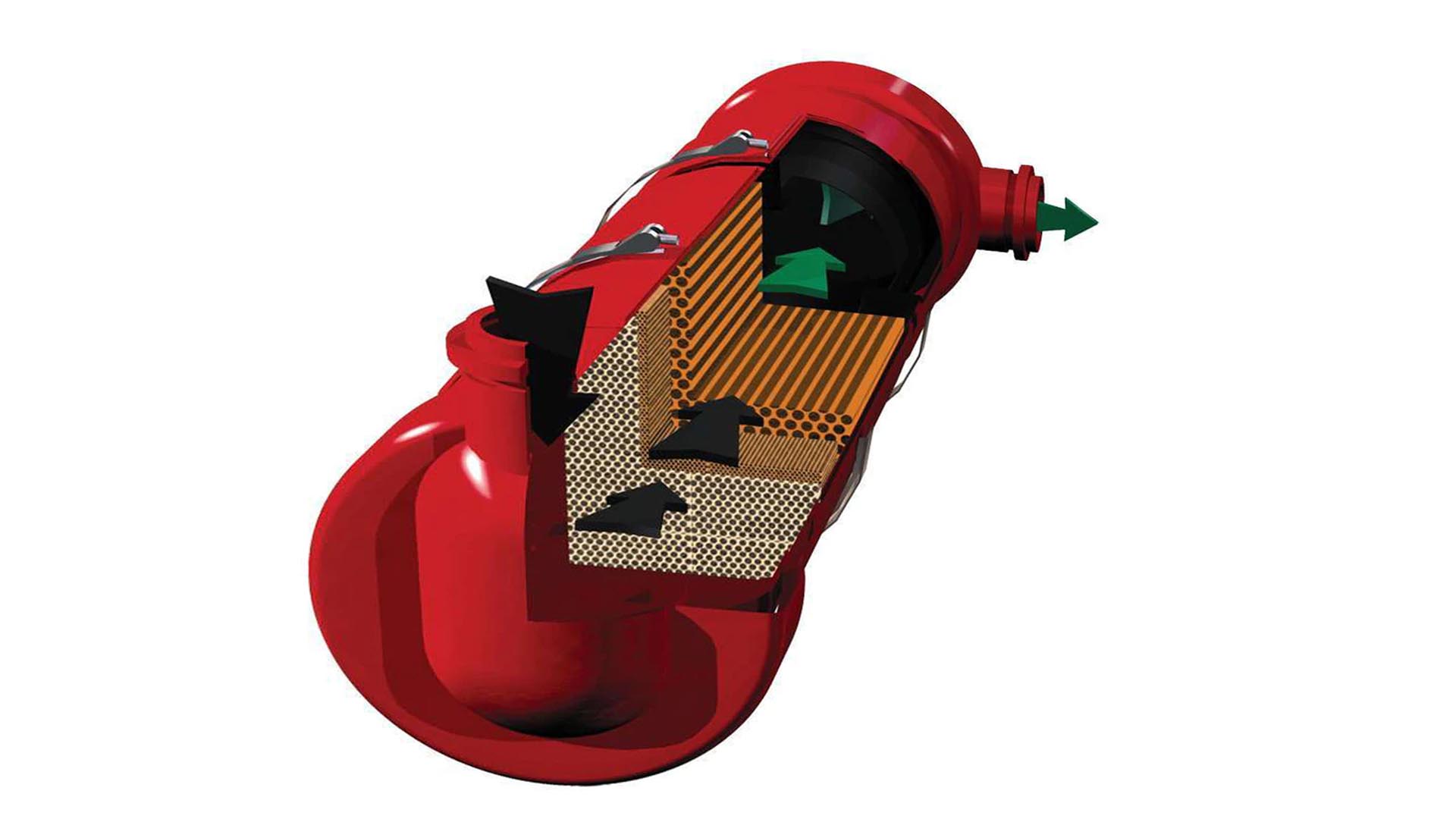 Serious and costly problems arise when successive regenerations are abandoned, and the soot levels build to a point where the DPF clogs and the system cannot regenerate on its own. In addition, short trips and stop-and-go traffic might not allow the DPF to get up to temperature. When this happens, a flashing DPF warning light notifies the driver of the condition. If the driver ignores the first warning light, then a second warning appears, which can cause the truck to enter into limp home mode. In limp mode, some vehicles will not operate over 20kph and will remain that way until it has been appropriately serviced using a scanner to perform the regeneration process.

Lifecycle of your DPF

For typical linehaul operations, the maintenance intervals on your DPF could be up to 500,000km or 250,000 litres of fuel burn. Expect your engine to perform an automatic Active Regeneration every 96 hours to clear any soot build-up in the filter. When you notice that regenerations occur more frequently, this is an indication that your filter is approaching the cleaning maintenance interval. The filter will need to be removed from the vehicle for cleaning. 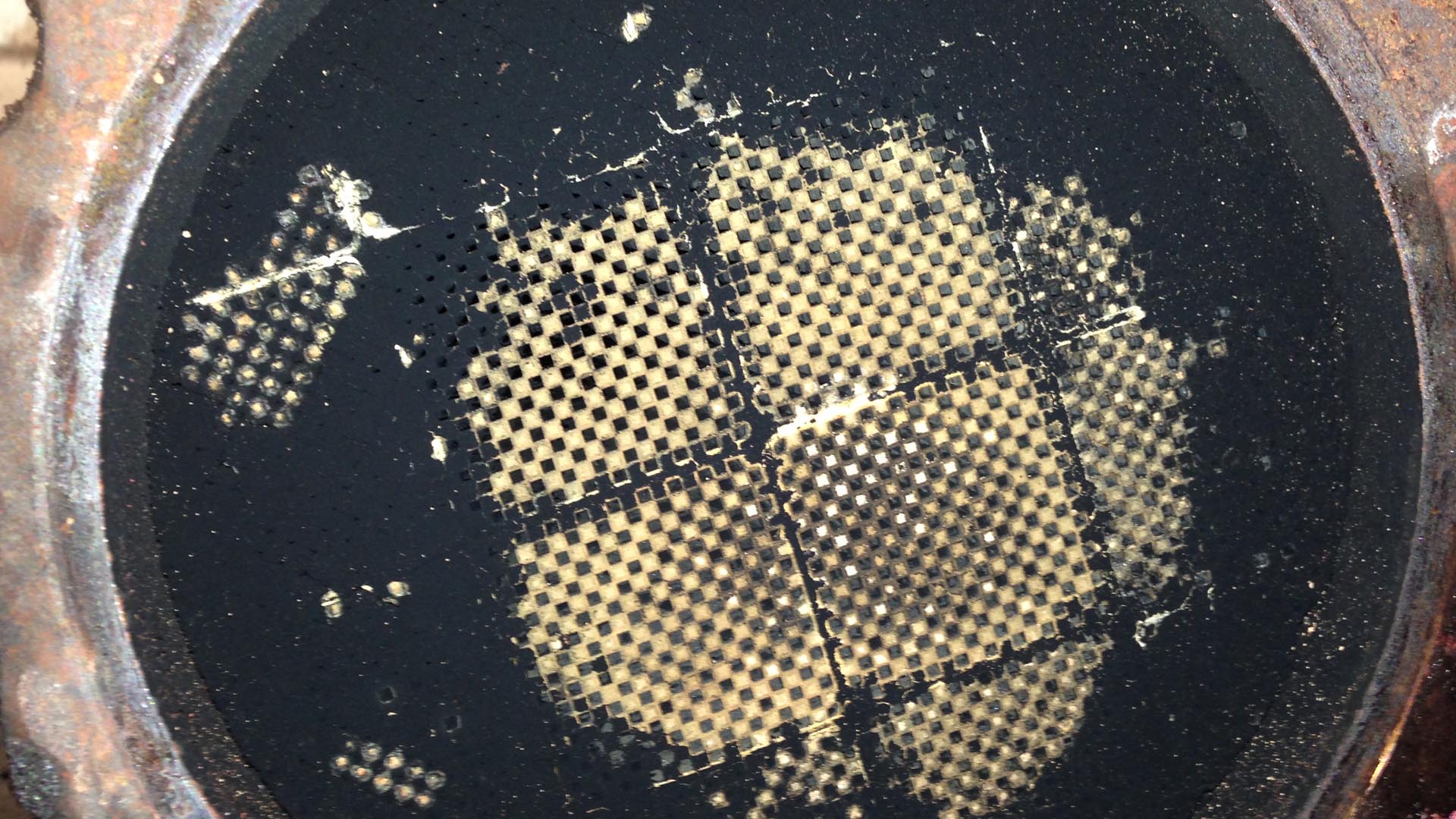 Some DPF failures are typically a result of not permitting the regeneration cycle to activate. Repeated regeneration halts will inadvertently clog the DPF to the point that replacement is the only option. Nevertheless, while professional cleaning the DPF is a possibility, it is a false economy. Because in such cases, a large portion of the DPF’s functionality is lost undoubtedly due to the severity of the internal restriction. Another problem is when the system is in the regeneration cycle, the combination of the clog and excess heat causes the metal casing of the DPF to expand and rupture. This, of course, means the only solution is to replace the DPF. Most DPFs require professional cleaning every 500,000km or 5000 hours.