Shifting in excess of 200-tonne economically and reliably today, from the coal face to the mine site processing plant, requires more than brute strength. It necessitates clever integration of both old and new technologies, as Howard Shanks recently discovered at one mine in Queensland’s Bowen Basin region. 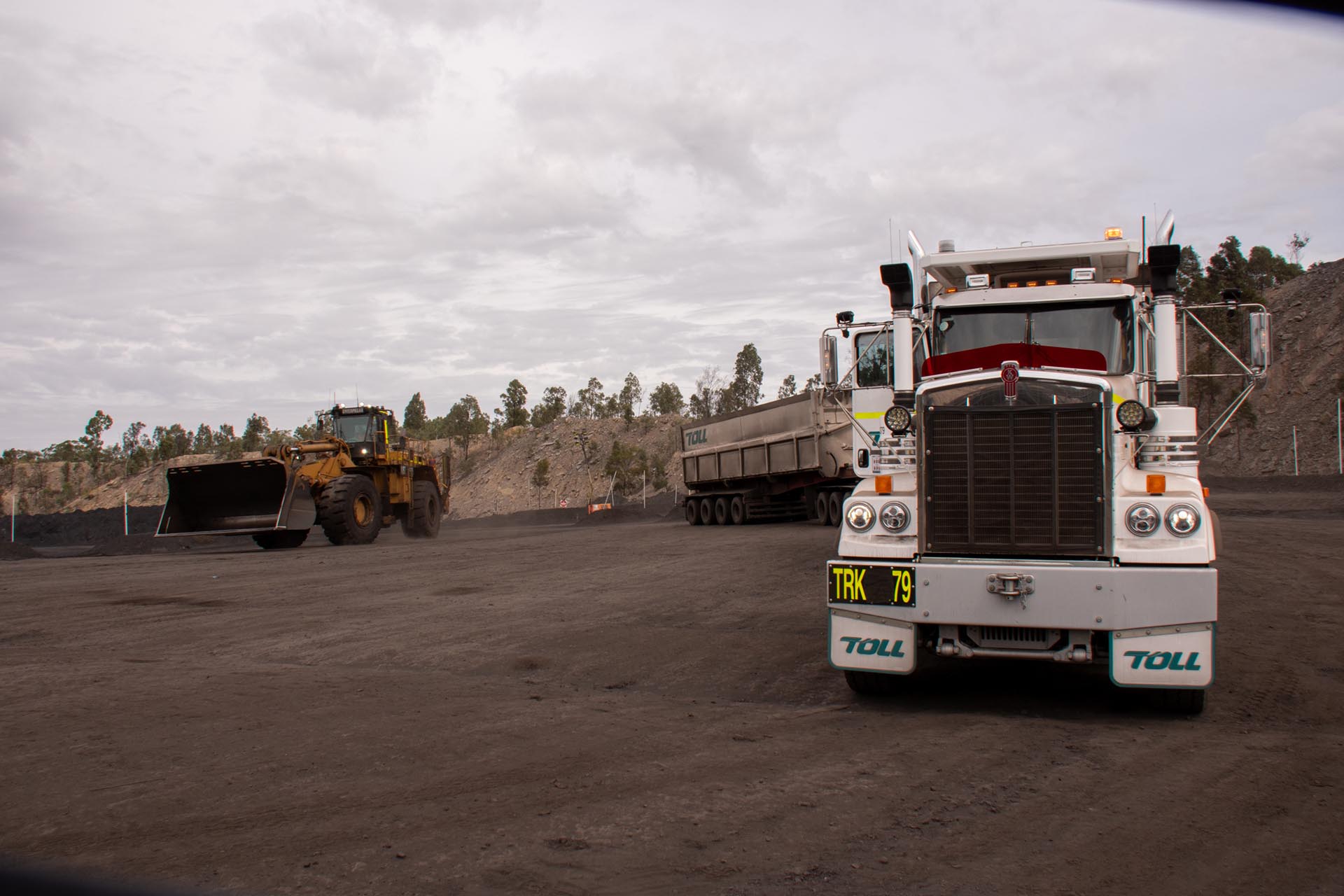 The initial email I received was succinct, to say the least. “We’ve got three new C509 Kenworth tri-drives arriving next month. They’ll be pulling 200-tonne payloads. Thought you might be interested.” The email concluded.

I certainly couldn’t pass up an offer like this. Needless to say, after a few more emails and a couple of phone calls, I booked the flight and a hire car for the journey.

The flight into Mackay landed somewhat later than planned. Thankfully, though, collecting the hire car was a much smoother exercise, and I was heading west out Mackay half an hour after touching down. My destination tonight was the mining town of Dysart, a little over two and half hours away.

I’d been advised to get to the gatehouse early the following morning, as there was a lengthy induction process required before entering the mine site.

It was still dark when I arrived at the mine gatehouse. But, finally, by mid-morning, I’d been issued with a visitor pass, my cameras inspected and tagged. John, my guide for the day, smiled and asked if I was used to these inductions by now. I smiled and nodded with a yes. 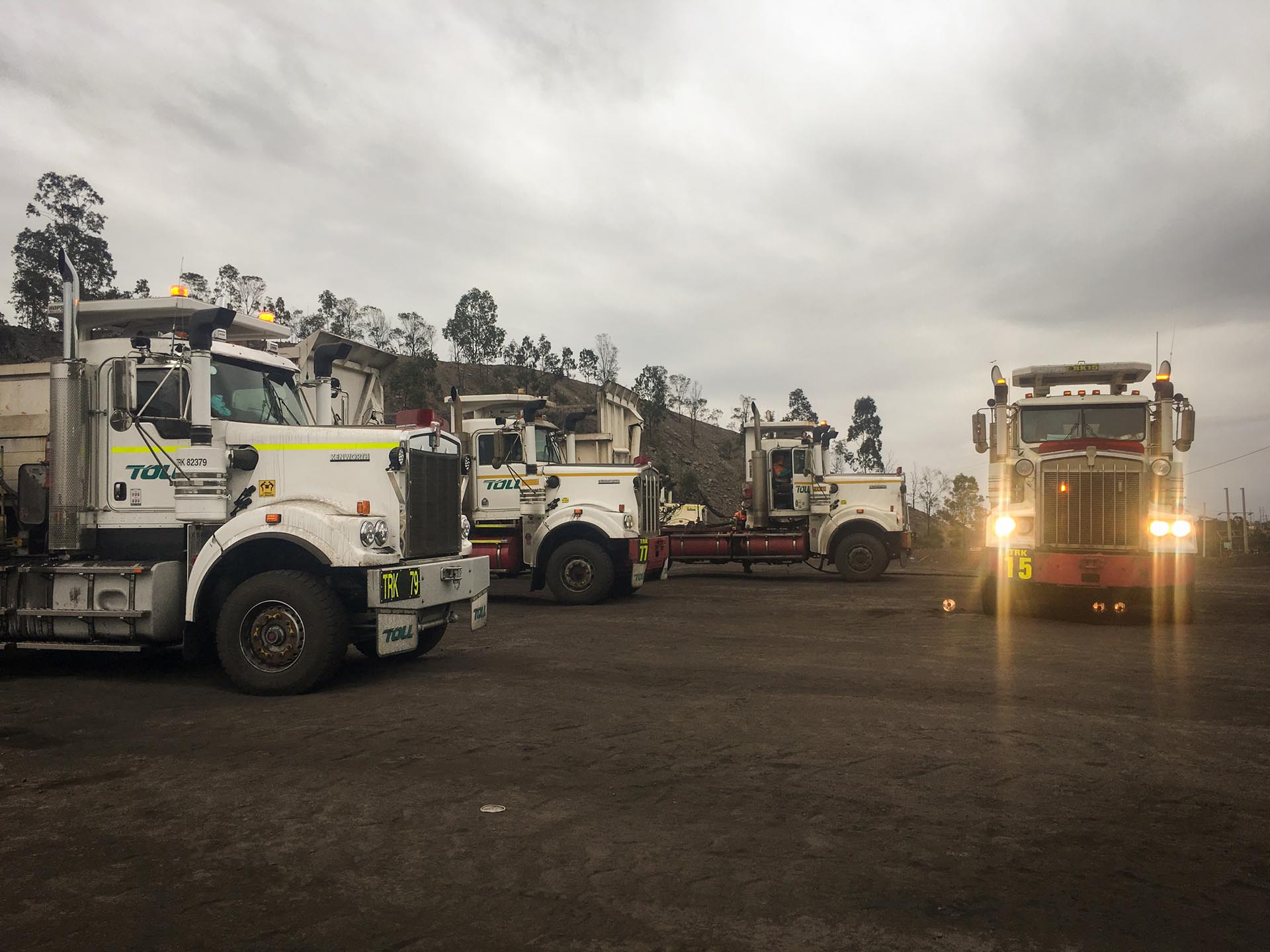 Once in the mine site, it was still a decent ten-minute drive to where the new tri-drive Kenworth C509s were parked up. The interior of the work ute lay covered with a thick layer of black coal dust. “It’s not the cleanest environment,” John said, pointing at the ute’s dashboard. “I clean this ute out at the end of every shift, but that black dust manages to cover everything out here.” Meantime a constant barrage of voices blaring out of UHF and two-way radios deafened the ride. “You get used to them after a while,” John added, as he picked up a handpiece to called his position.

I remember seeing similar mine specked trucks on a tour of Kenworth’s Bayswater factory some time back and recall how big they appeared standing next to their highway counterparts. Yet here in the Bowen Basin coalfields, even with their 3-meter-wide quad-axle trailers, they are dwarfed by the huge mining loaders and dump trucks.

These tri-drive C509 Kenworth trucks are classified as Off-Highway vehicles and pull two 3-meter quad trailers with average payloads of 170-tonne of coal ore from the coal face to the mine’s processing facility. It’s not uncommon to see conventional road train style configurations used in mine sites where haulage leads exceed 20 kilometres lengths. Traditional mining dump trucks certainly provide greater efficiencies on shorter haulage leads. Their productivity gains are achieved in quick loading and unloading times, along with their ability to climb out of steep pits. However, they suffer overheating issues, and their expensive tyres (Bridgestone or Michelin 59/80R63 XDR cost approx. $60K each) are not designed for long constant runs. On top of that, the construction and maintenance for purpose-built dump truck haul roads are approximately double that required for a conventional road train. 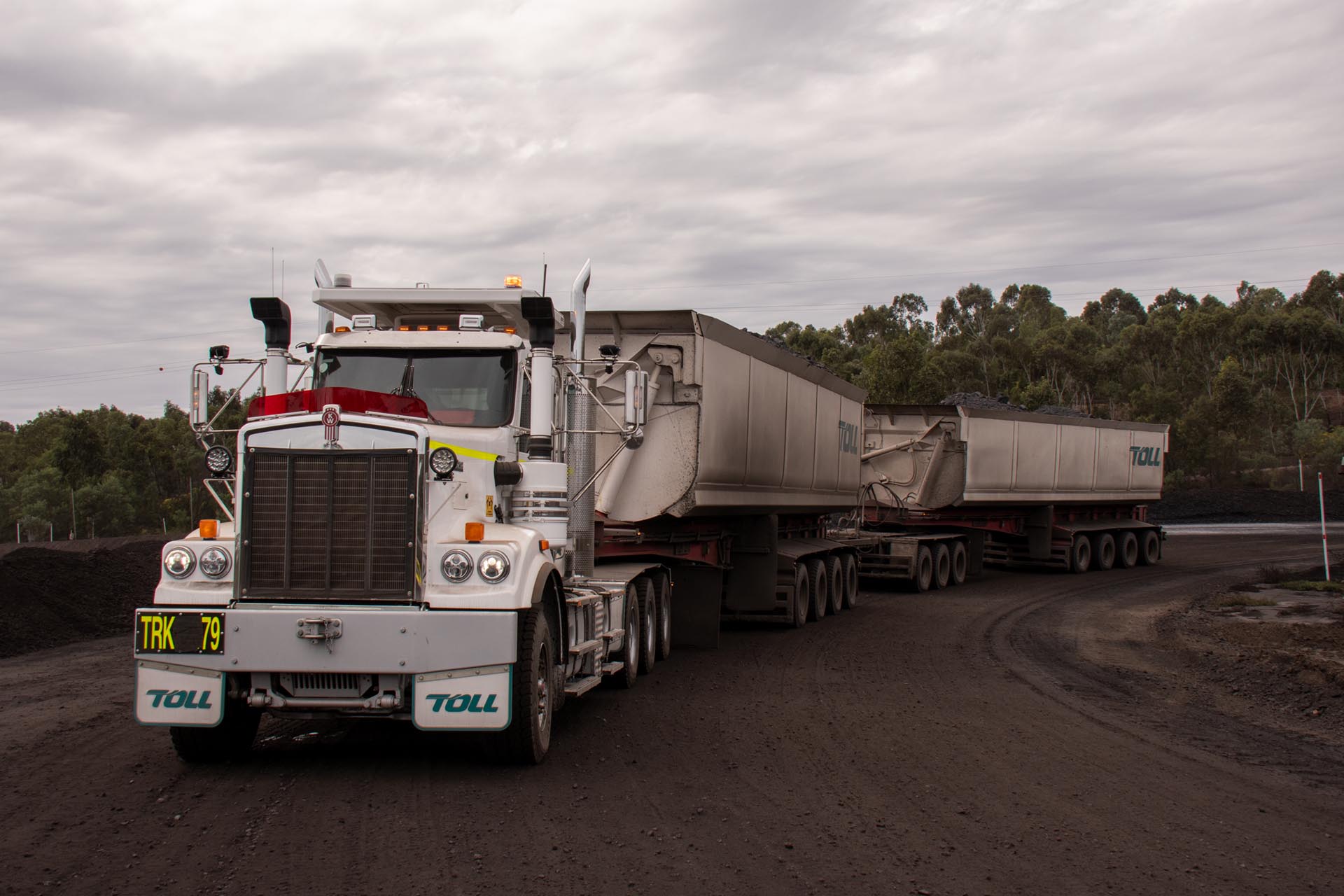 On longer haulage leads, traditional road train style configurations deliver far greater efficiencies, not only with quicker trip times than conventional dump trucks but with far lower operating costs. For example, these C509 Kenworth trucks and trailers use standard highway tyres that are easily sourced and far cheaper (between $800 – $1000 each) than dump truck tyres.

Investment wise, you can purchase five of these tri-drive Kenworth C509 and their trailer sets with a combined carrying capacity of approximately 1000-tonnes for the same prices as one 797 Caterpillar 400-tonne dump truck. Although at some mine sites, they utilise a combination of both to maximise their haulage efficiencies. The purpose-built dump trucks haul ore from the bottom of steep open-cut pits to dump sites at the surface. This ore gets loaded onto conventional road trains for the remaining longer journey on the haul road to the processing plant.

If you recall, we mentioned earlier that these Kenworth C509 combine old and new technologies to maximise reliability in the harsh hot conditions of the north Queensland minefields. 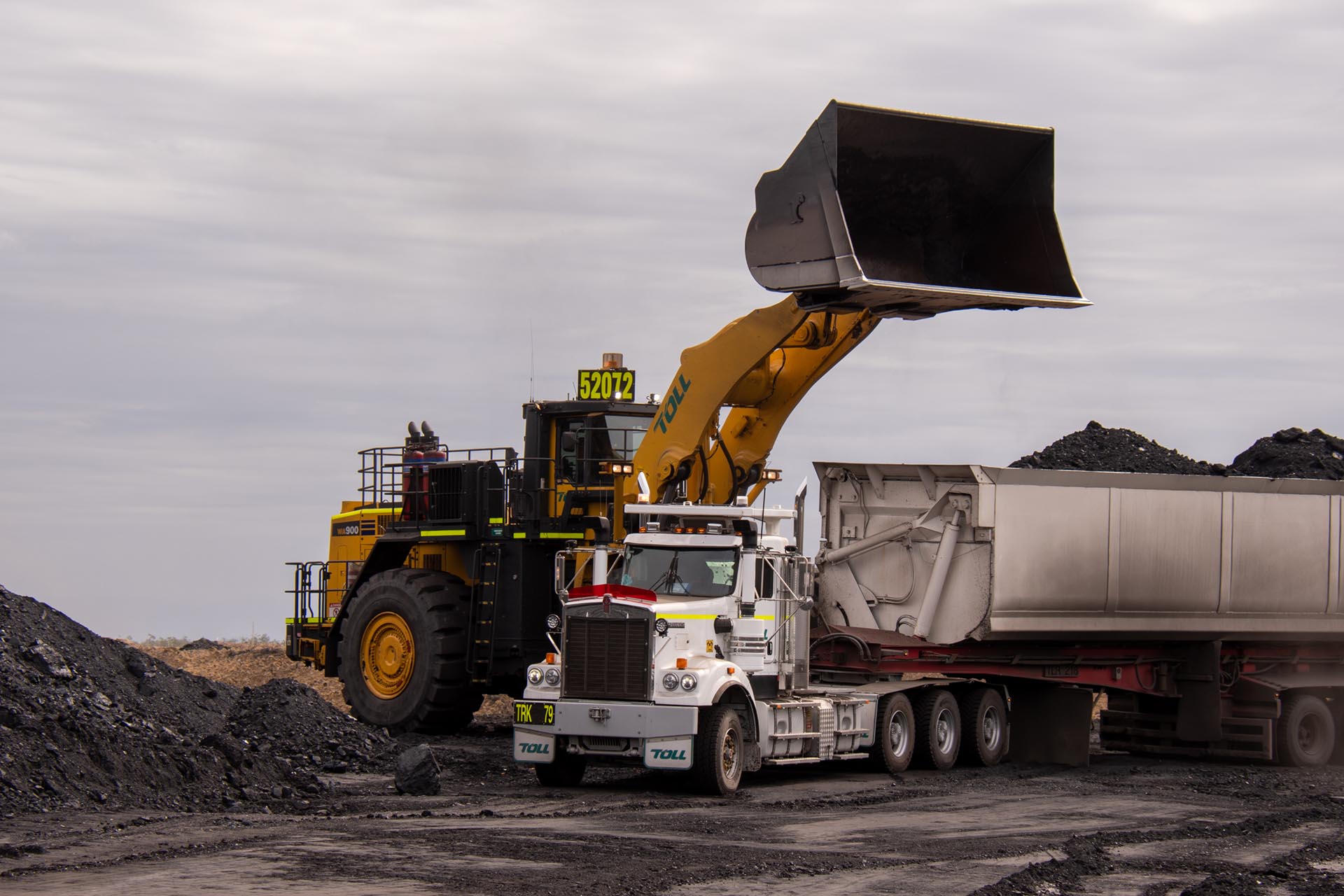 North Queensland’s unrelenting high ambient temperature is not conducive to cool component operating temperatures, nor is the extremely high payloads these mine spec trucks are expected to haul up long gradients. So, it certainly comes as no surprise to learn that Turbocharger failures were commonplace on the older trucks, these new C509’s replaced. After all, when loaded, the engine load is at 100 per cent capacity for the gruelling hour-long trip from the coal face to the processing plant.

These new C509’s have an old school Cummins GEN-II Signature engine was slotted under the hood to overcome those turbocharger failure issues and improve reliability. The absence of an Ad-Blue tank hanging off the chassis might have tipped you off that there was something a little different with the engine spec. I must add a quick note here. These Kenworth C509 trucks will never see highway use, so they do not need Euro-5 or Euro-6 compliant emission engines.

Cummins GEN-II engines indeed have an envied reputation for reliability.

The (general) consensus of the constant turbocharger failures in the previous trucks was attributed to excess heat. The combination of high ambient temperature, high truck gross combination weight, challenging slow climbs with minimal airflow in the engine bay and constant 100 per cent engine load at full throttle all contributed to the problem. 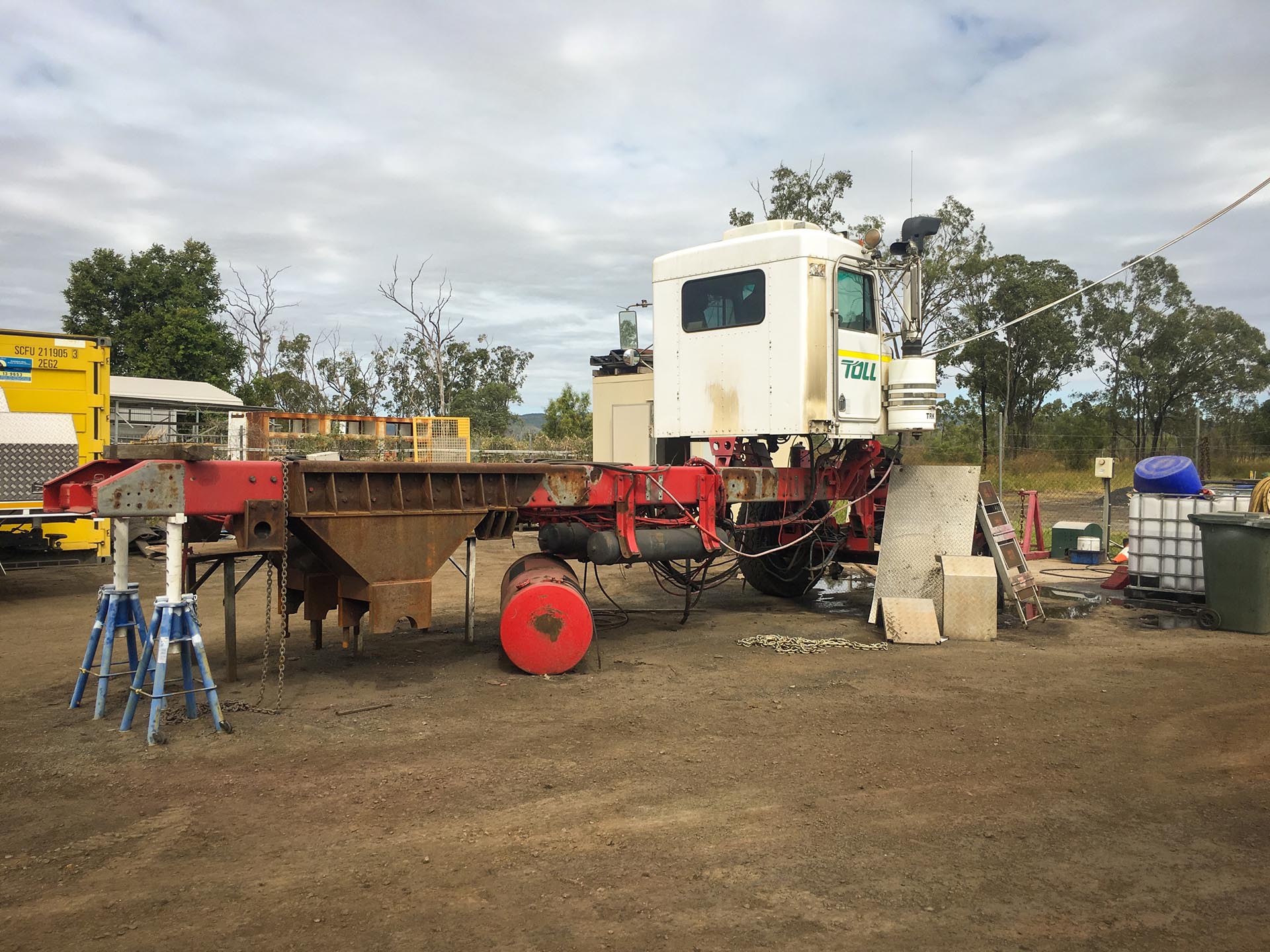 There is not much that could be done about the high ambient temperature or the high payload. And reducing haul road gradients was not an option either. However, Cummins did stick their hand up and suggested an alternative engine tune to reduce heat generated in the turbocharger.

The short version of their new engine tune theory is based on a thorough understanding of the principles of horsepower and torque. As a result, greater torque rather than higher horsepower is required to effectively move the load in this application. Back to some engine basics-101, in order for any engine to make more horsepower, it requires more fuel, and more fuel generates more heat. Consequently, the horsepower setting was reduced from the traditional Signature 600HP rating to 500 HP however torque output got boosted to 2250 lb-ft (3050Nm).

The big red Signature engine connects to an Eaton 18-speed Ultrashift Plus transmission. Indeed, a transition from the traditional stick shift, more commonly found in heavier specked machines was not surprising given the rise in torque output. While the hardware of the Ultrashift Plus box is essentially the same as that found on a highway truck, the shifting strategy software is specially formulated to suit this application. Furthermore, the operator has fully manual shift override ability in any gear. 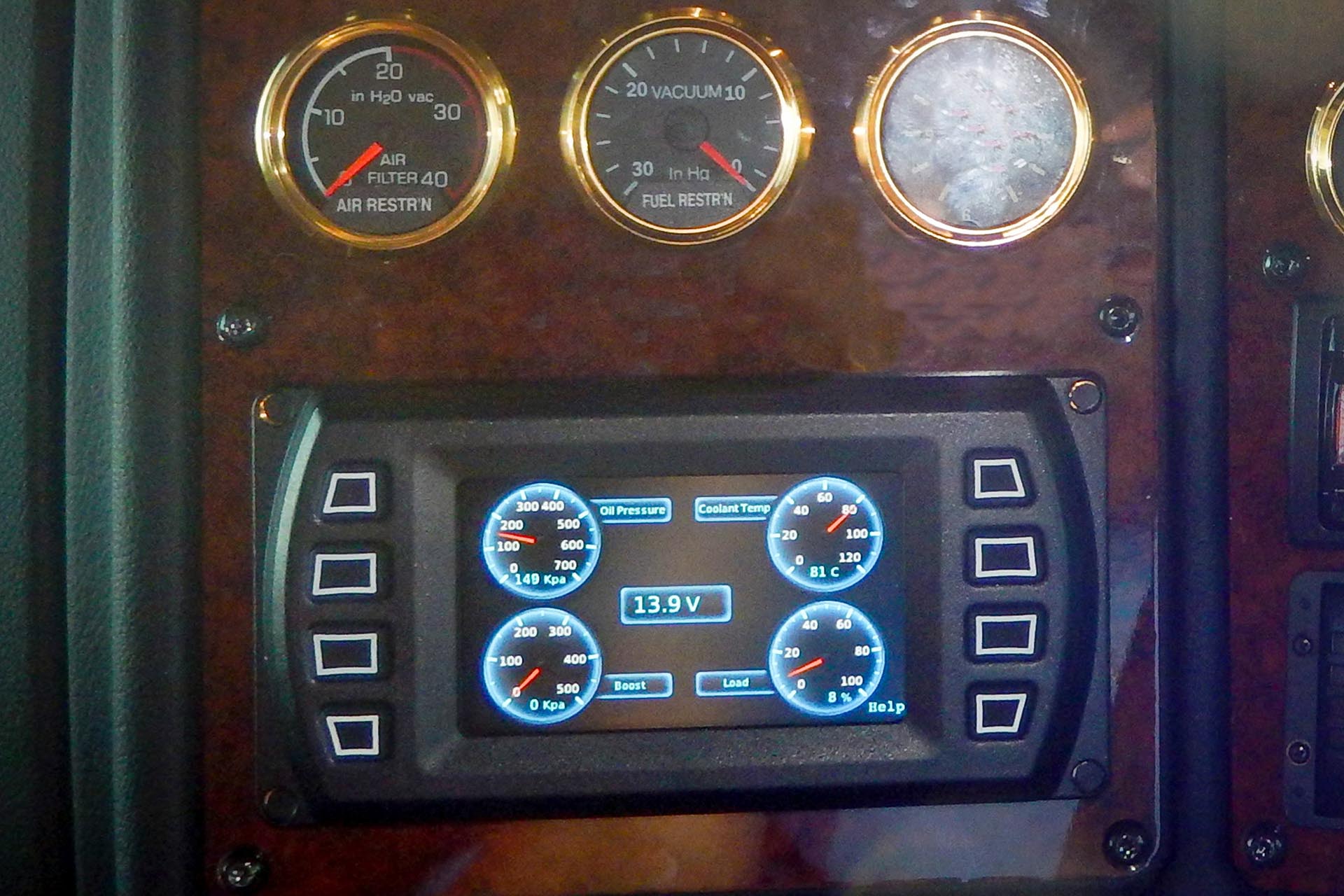 The Road-Sight-5 gauge display, monitor and protection system offers several features that assist the driver, fleet maintenance and management all from the one device. A control panel and display are mounted in the truck’s dash, which gives the driver real-time engine information in easy to read, life like gauge displays. A series of buttons on either side of the screen enables the driver to navigate the menu and display screens quickly. In addition, the system collects data from the vehicle’s ECU and can log and transmit data back to fleet operations.

In addition to the device’s monitoring ability is the capacity to capture and log the whole of life vehicle data, which is vital for management to evaluate vehicle operating costs. The system can also provide service alerts, log faults and user-defined parameter setpoints. If you run external cameras, the display can accept video feeds too.

At the coal face, I had the Road-Sight-5 set on gauge screen-1 when the loader driver called through that he’d finished tipping in 176-tonne of ore over the UHF radio. The RPM needle sat at 600RPM, the same as the truck’s tacho. The coolant sat at 95°C. The engine load sat at 5 per cent, running the air-con and so on while the truck was getting loaded. However, once I released the parking brake, pulled the shift lever into ‘Drive’ and selected fist gear, then squeezed gently down on the throttle, that engine load meter quickly shot to 100 per cent. 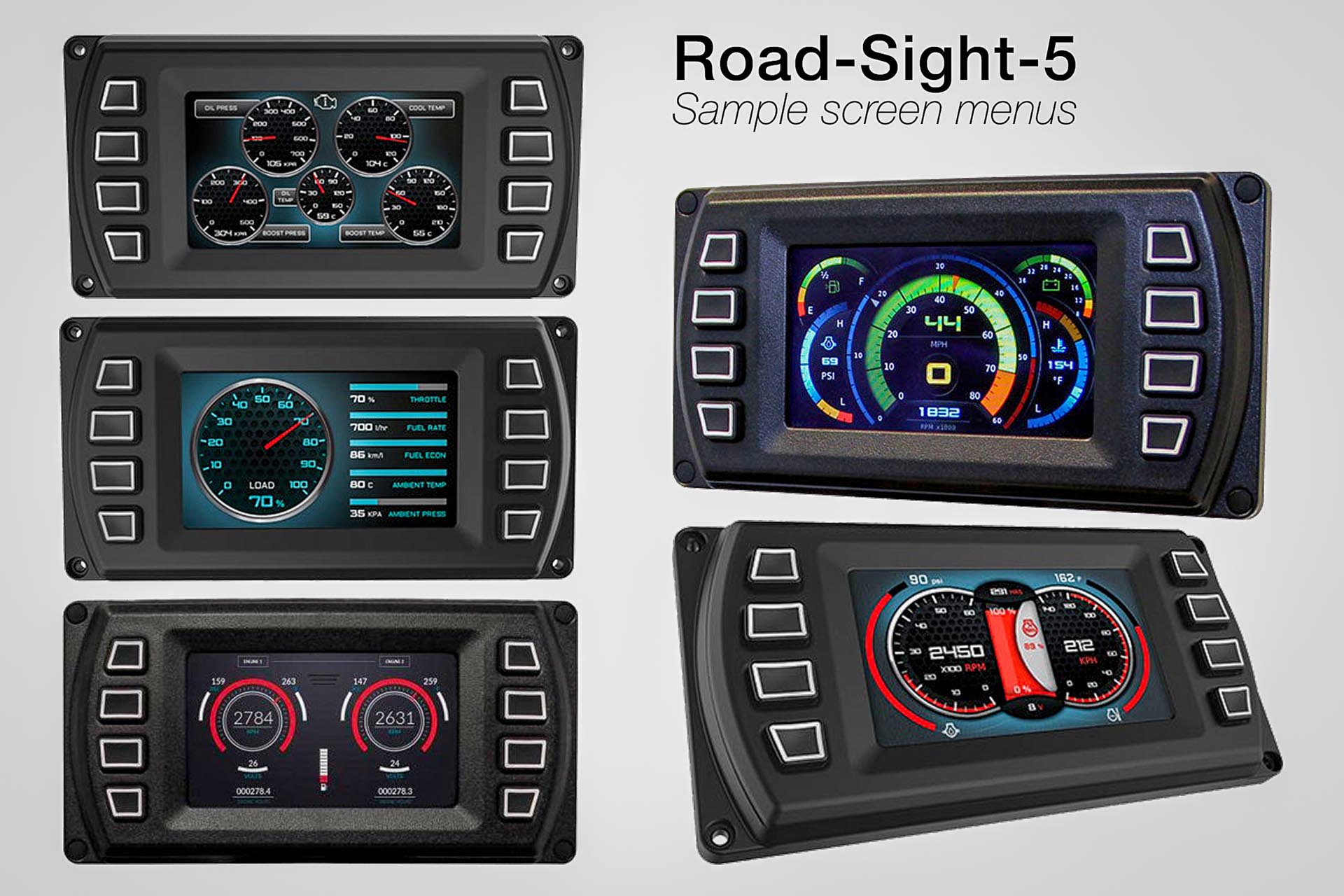 As the C509 slowly crawled its way out of the coal face pit, I toggled to gauge face screen-3. The large needle on the engine load gauge sat firmly at 100 per cent, as was the throttle percentage. Fuel was pouring into the cylinders at 52l/hr, and fuel economy was down to 0.3km/l. The soft, loose floor of the pit made for hard work as the oversized SISU rear axles on the C509 scratched for traction even with all the diff locks fully engaged.

Once out on the haul road, the fuel economy improved slightly and at one point on a slight decline momentarily made it above a single digit figure 1.2km/l, while the engine load decreased to 86 per cent.

But proof that the return to Cummins’ proven GEN-II engine set at 500HP and 2250lbft torque was solving turbocharger heat issues were evident on gauge face screen-2 with the boost temperature registering 210°C on the long pulls. Only a couple of times, I intervened to initiate a manual down change on a few of the steeper drags when the boost temp edged above 210°C. However, once the down change was completed and the engine revs increased 350 RPM, the fan pulled more air through the radiator and forced more air into the engine bay. As a result, the turbo spun faster, whisking air quicker into the cylinders, and the boost temperature quickly dropped.

It may still be early days to tell if the integration of old and new technologies is paying dividends. But so far, so good is the word from the workshop. Incidentally, when these trucks were on the drawing board, Ad-Blue was cheap and plentiful, yet in hindsight, the move to install an Ad-Blue-less engine might be a bonus.