The introduction of Mack’s B-Model in 1953 bought a raft of new technology and design concepts that would prove a complete departure from conventional trucks of the time. One of these more noticeable design concepts was found at the truck’s rear. Here top-mounted dual-reduction carriers were married with Mack’s Camelback suspension that eventually Mack marketed as “Balanced Bogies”. 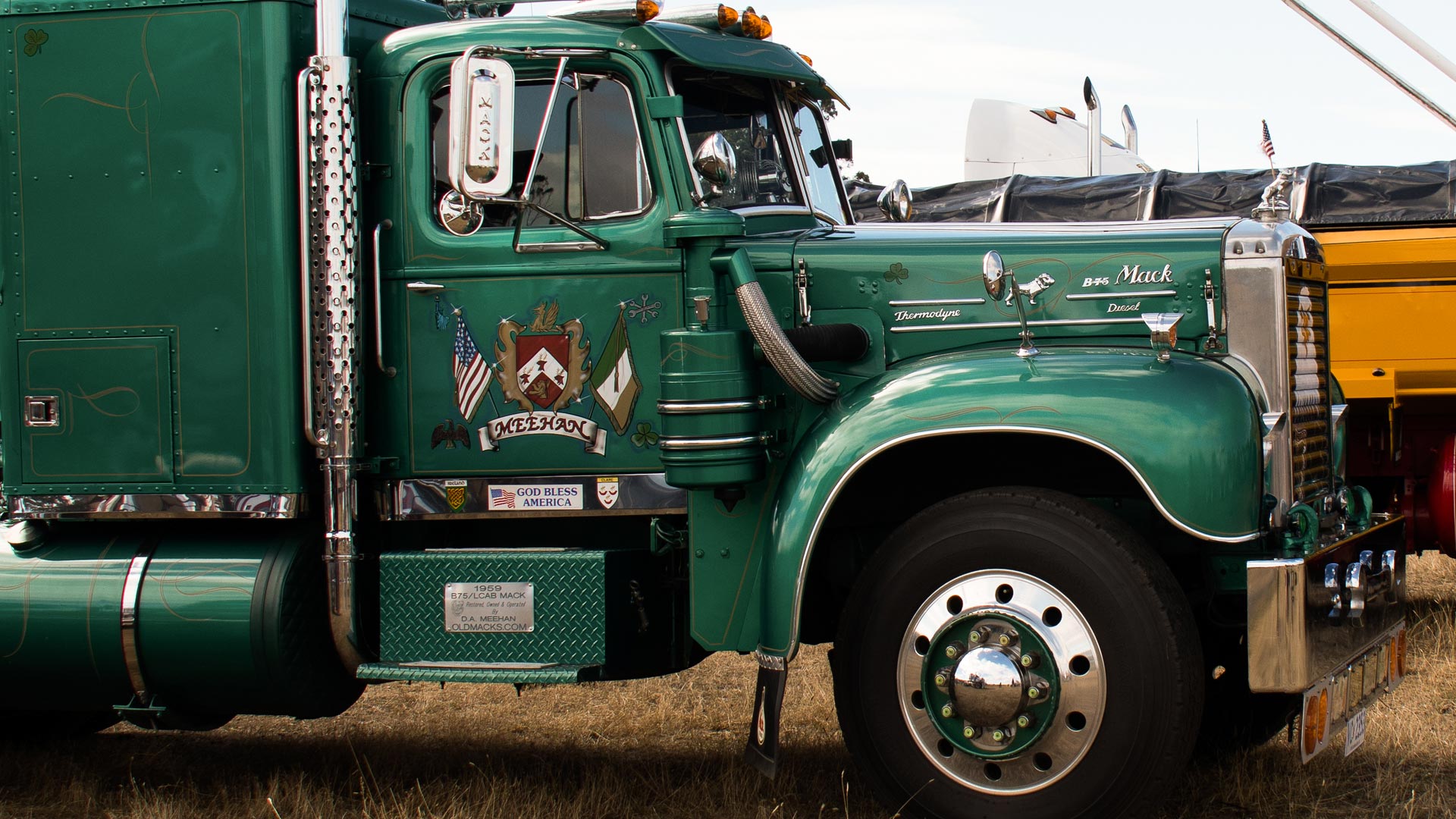 Interestingly, Mack still offers their “Balanced Bogies” today in the Granite model. We pondered, some time ago, why Mack’s “Balanced Bogies” are still so well-liked and why they’re still in production after 70-seventies years when we explored the pros and cons of Mack’s Camelback in an earlier article. This article delves into the distinguishing features of Mack’s unique top-mounted axle carriers and explains how they work.

Surviving two world wars as the preferred heavy truck supplier to the military had taught Mack many lessons. One important lesson was integrating parts commonality across components. Component parts commonality in a war zone meant transport regiments only needed to carry minimal spares to maintain a large army convoy. 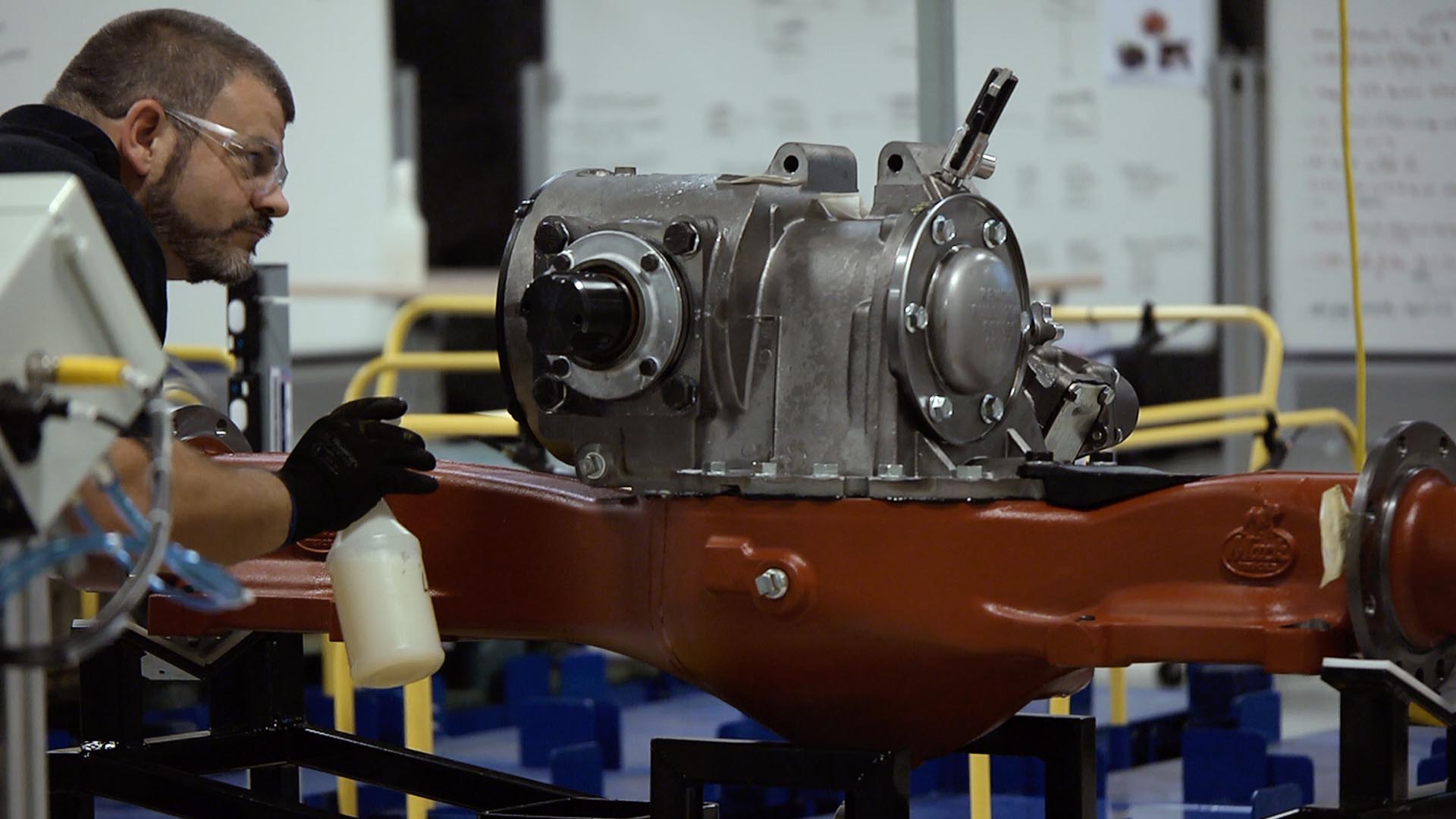 For this reason, Mack engineers designed the front and rear carriers identical, except for the main input drive and through shaft arrangement of the front axle carrier, which differs from the input pinon mounting of the rear carrier head. The economic benefits of this clever design paid dividends for Mack in production and also for customers in the field, where savings were instantly recognisable when it came to maintenance.

Before getting into the nitty-gritty of the Mack differential process, its probably best if we take a minute to understand what a power divider is and how a conventional one operates to appreciate the unique operation of Mack’s power-divider fully. 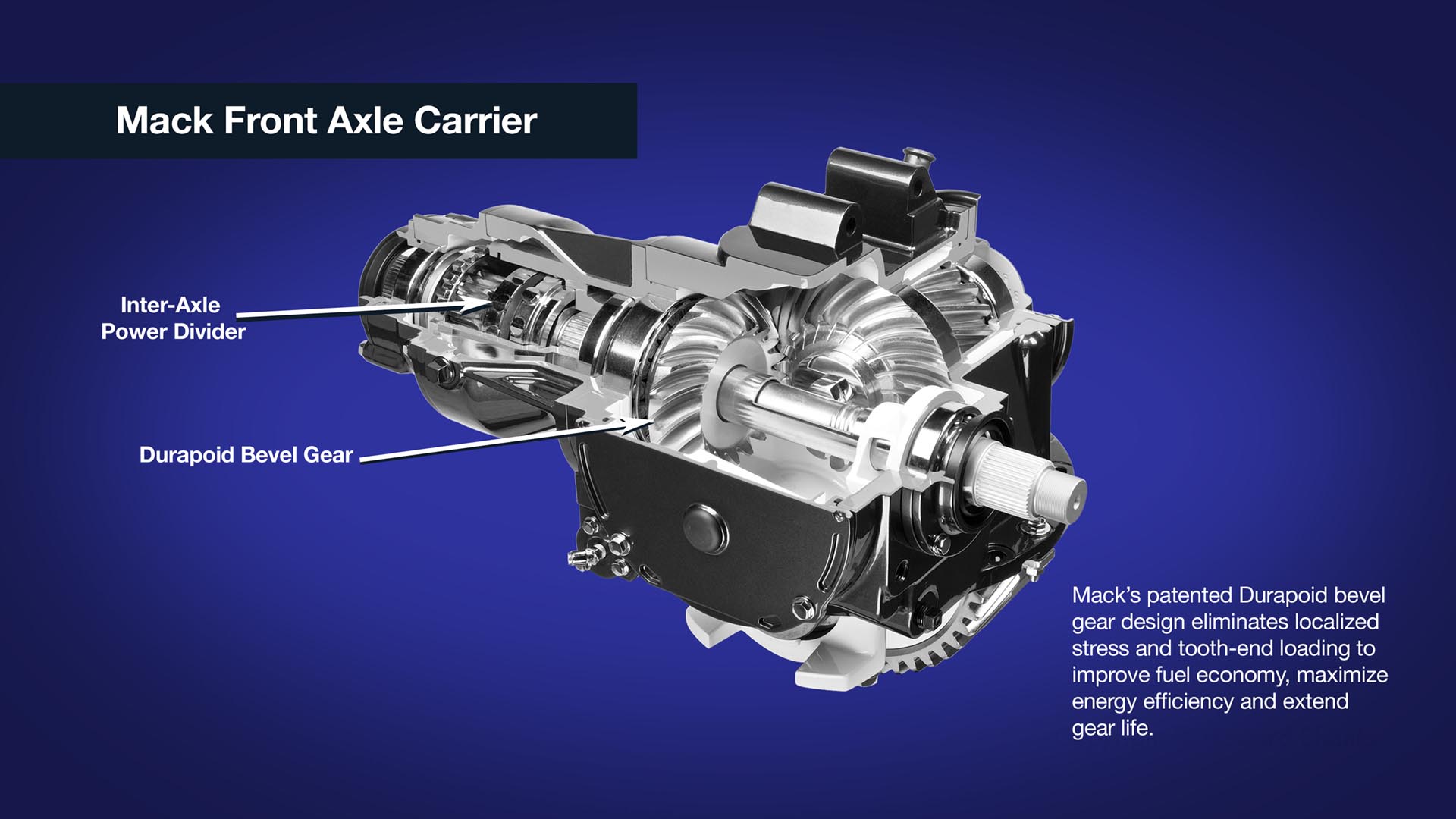 It’s a fact of life that all tandem or tri-drive trucks require a Power-Divider, also referred to as the inter-axle differential, which allows the forward and rear axle to rotate independently of each other. Apart from relieving stress on all the axles and reducing tyre wear, it importantly enables the vehicle to corner more effectively.

Most trucks have a switch located on the accessory switch panel, enabling the Power-Divider to be locked or engaged. When the Power-Divider is in the “engaged” position, it causes the differential action of the power divider to act as a “through-drive,” transmitting power equally between both the forward and rear axles; this, in turn, provides better traction for slippery surfaces. 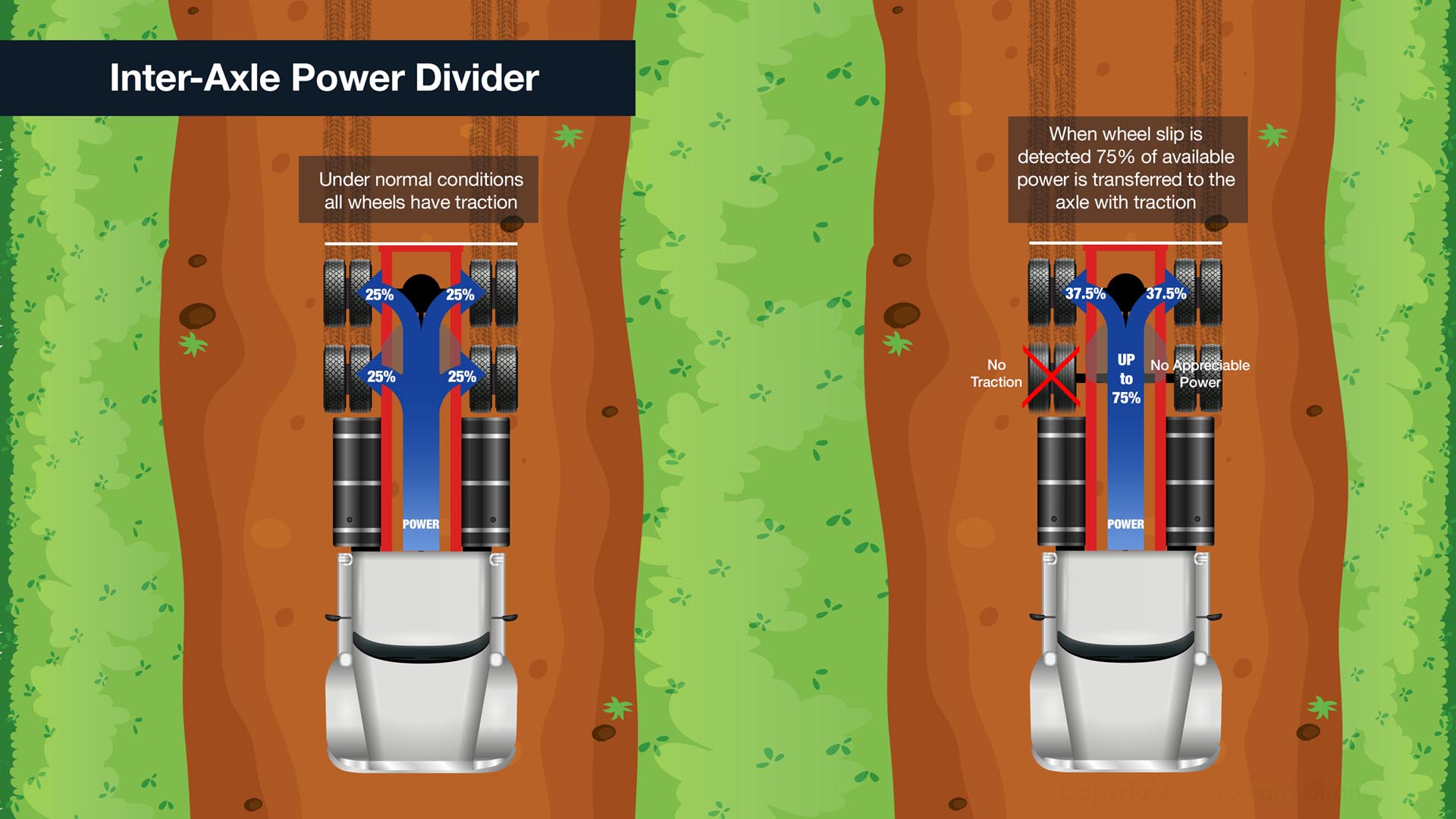 Mack’s Power-Divider works a little different and is called a ‘torque proportioning inter-axle power divider’ because of its ability to distribute torque according to the requirement to deliver the best traction.

Undoubtedly the best way to describe how the system works is if you think of the Mack Power-Divider as a third differential. The inter-axle Power-Divider splits driving torque evenly or unevenly, as required between the axles. It does this autonomously without any interaction from the driver to maintain traction in the most challenging conditions. Essentially, the torque proportioning Power-Divider automatically provides a 3-to-1 torque biasing capability to the axle with the best traction. Consequently, in slippery conditions where there is a risk of wheel spin that could cause a loss of momentum, 75 per cent of the total available torque gets directed to the axle with the traction. 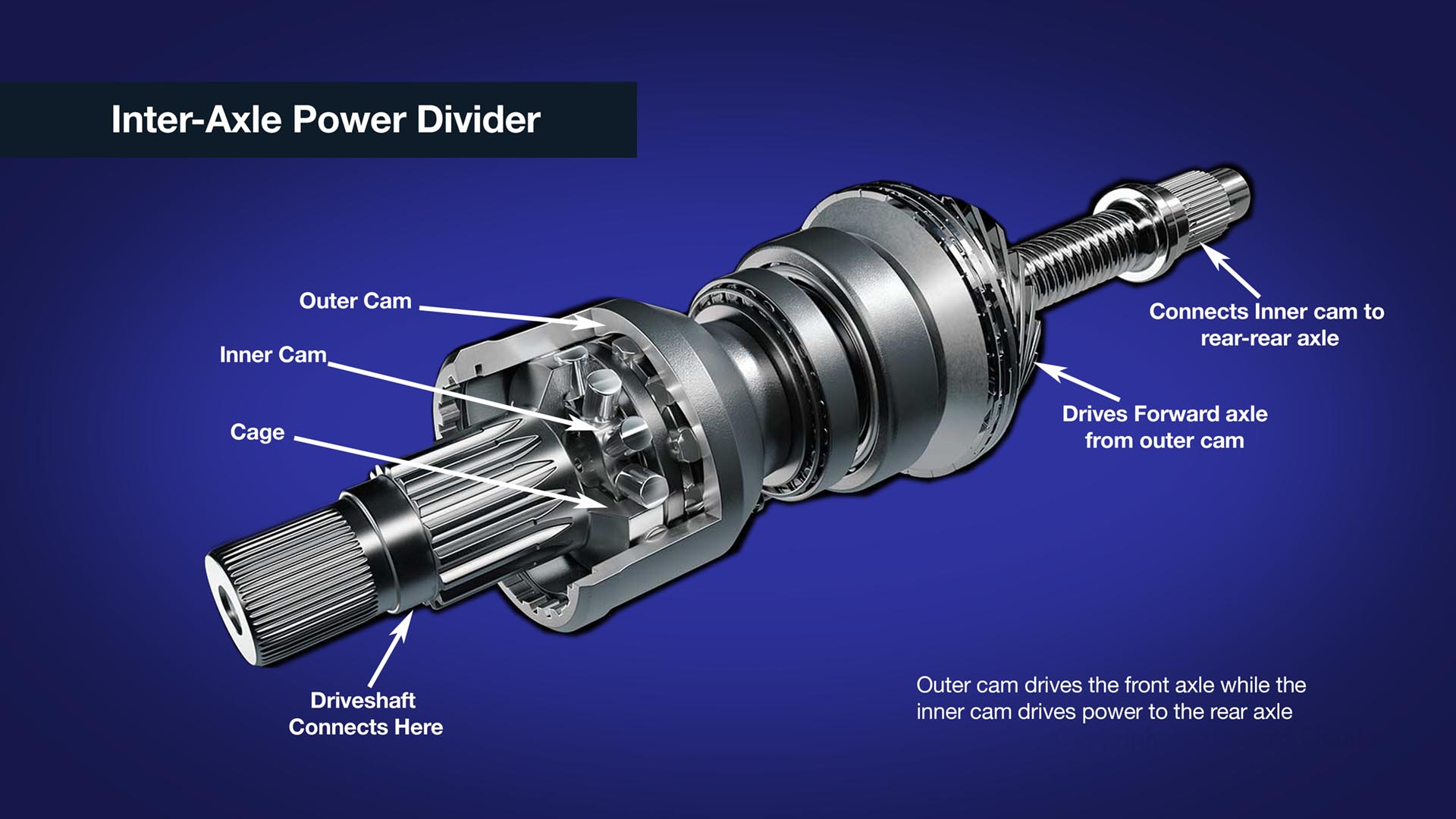 Conversely, a traditional hypoid style differential will either apply torque to the axle or wheel with the least resistance or equally distribute torque if resistance is equal at all wheels. For instance, when driving into a depot with a deep gutter out the front, you may find the truck gets stuck when one wheel in the tandem group is hanging in the air spinning. All the torque goes to the wheel hanging in the air with no resistance in this situation. You find you need to engage the Power-Divider-Lock to transfer some of the driving torque to the wheels still in contact with the ground.

How a mack Camelback Suspension works

How to operate a tandem drive Power Divider and Diff Locks

On the other hand, in order to move the vehicle forward in the same situation with a truck fitted with Mack’s torque proportioning Power-Divider. The Mack Power-Divider instantly detects the loss of traction to wheels hanging in the air. It automatically multiplies the driving torque by three to the remaining wheels with traction on the ground. Most old Mack drivers knew that even when no traction was available at the spinning wheel if they applied the brakes slightly, it created enough resistance at the wheel to allow power to the axle with traction. It’s a very clever system. So brilliant, in fact, that it has remained in production since its introduction in 1953. 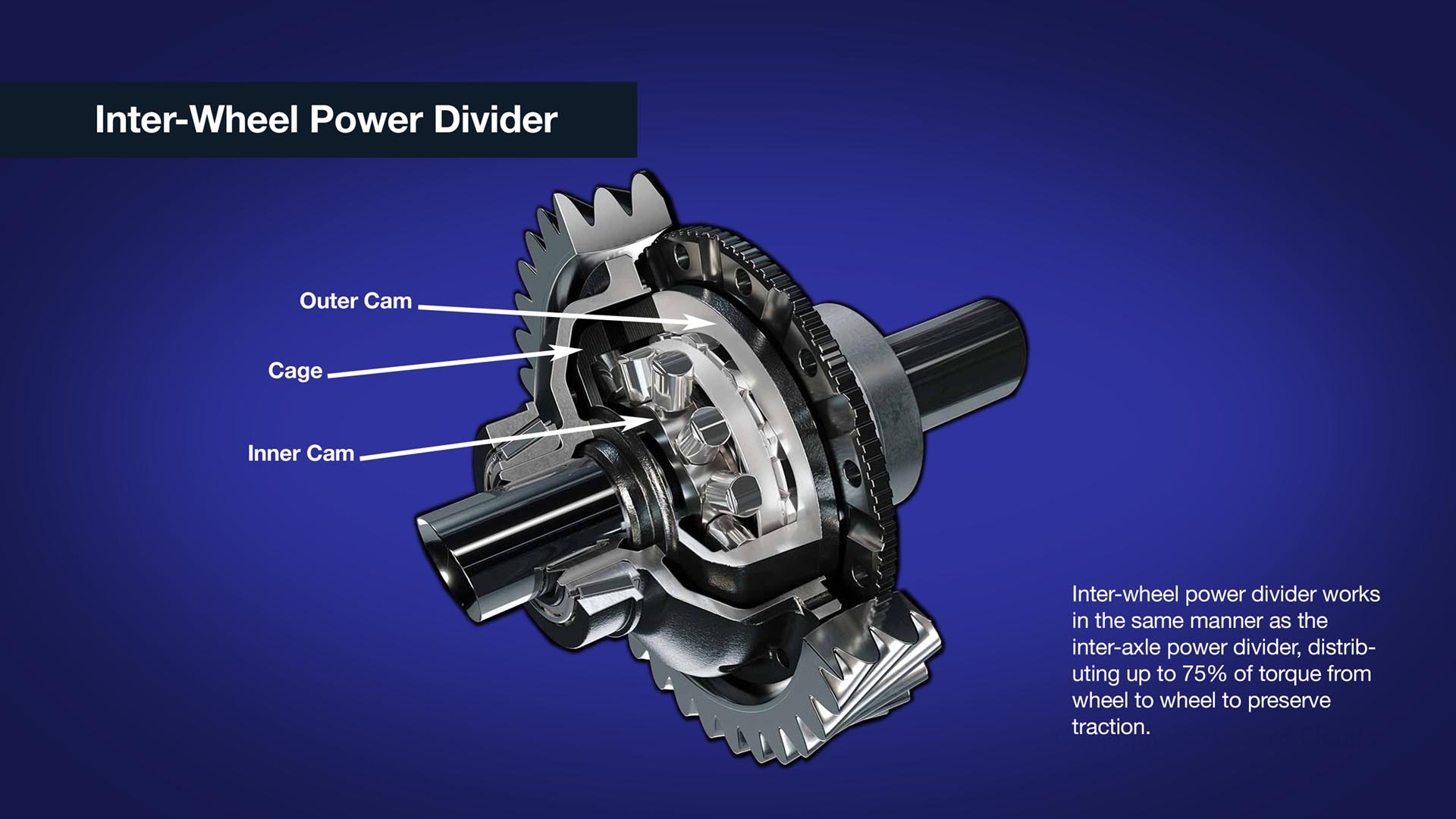 Over the years, many rival axle manufacturers have tried to imitate Mack’s top-mounted axle carriers, all with limited success. By the late sixties and through the seventies, Rockwell manufactured the 4640 family of top-mounted double reduction tandem carriers known as the SFDD and SRDD models. However, after a quick glance at an SFDD parts schematic, you’ll notice that the Rockwell model failed to match the benefits of Mack’s torque proportioning Power-Divider by opting for a traditional Power-Divider instead. The famous Irish author and poet Oscar Wilde’s quote “Imitation is the sincerest form of flattery that mediocrity can pay to greatness” certainly comes to mind.

However, much like a TV infomercial, “But wait, there’s more”. Mack also provides a Power-Divider lockout designed to couple the forward and rear carriers together as one unit in a straight-through positive drive arrangement. Typically, the Power-Divider lockout’s main advantage is when operating in exceptionally severe operating conditions. In situations where the road surfaces are so slippery that traction is difficult to achieve through the torque proportioning Power-Divider action alone. The lockout device inhibits the operation of the Power-Divider. It consists of an air-actuated, gear type sliding clutch which, when engaged, couples the cage to the outer cam to effectively de-activate the function of the power divider differential. 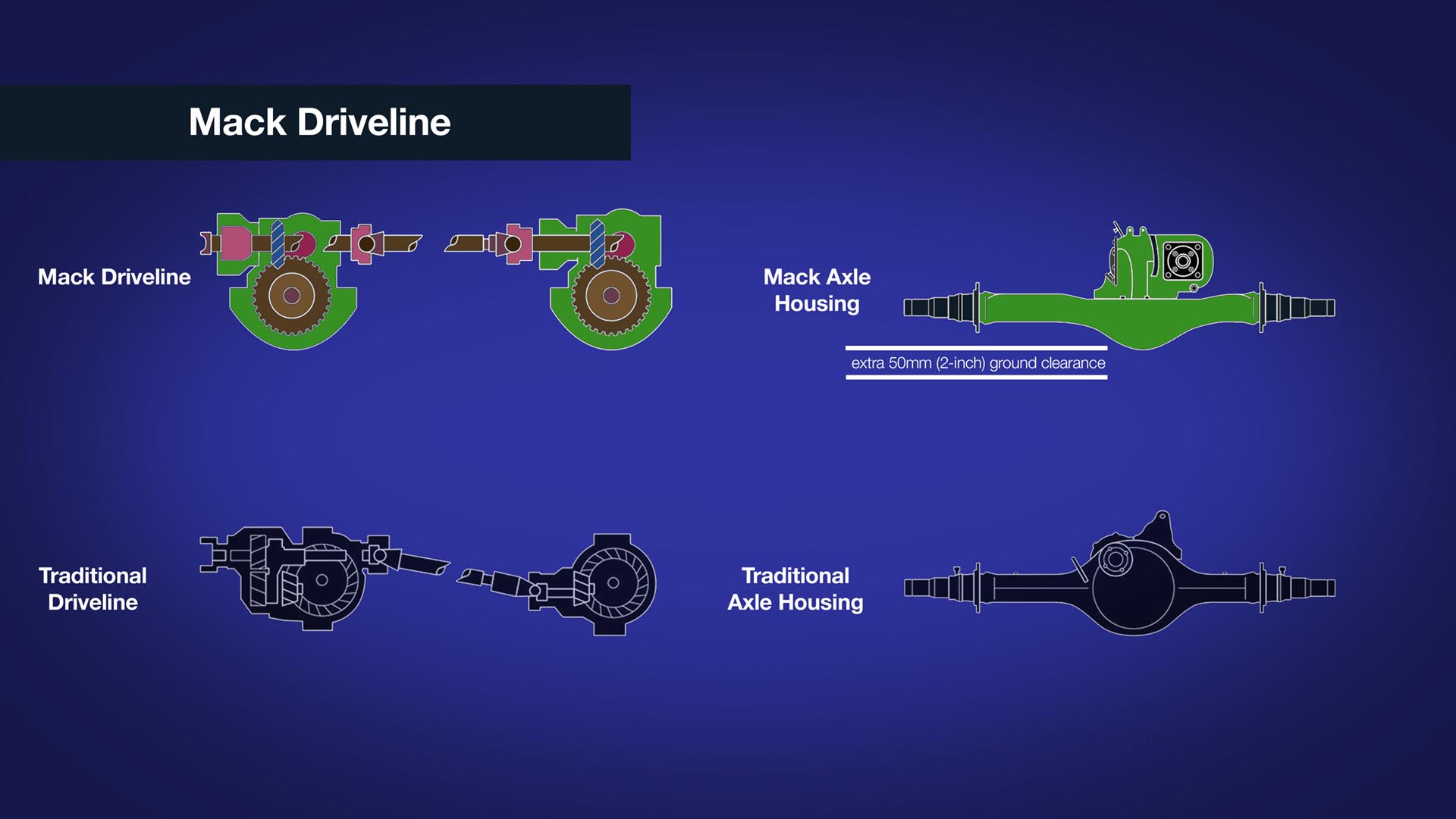 Indeed, during the seven decades of production, Mack’s top-mounted carriers have received many upgrades and design enhancements. Today the current top-mounted carriers enjoy a B10-life of one million miles. They are the only tandem drive on the market with high mounted straight shafts that provide narrow driveline angles to reduce torque vibrations and extend U-joint life. They boast an additional 50mm of axle ground clearance over traditional axles, and they are far lighter, allowing for a greater payload.

It’s little wonder then that Mack’s “Balanced Bogies” are standard spec on their vocational construction models. 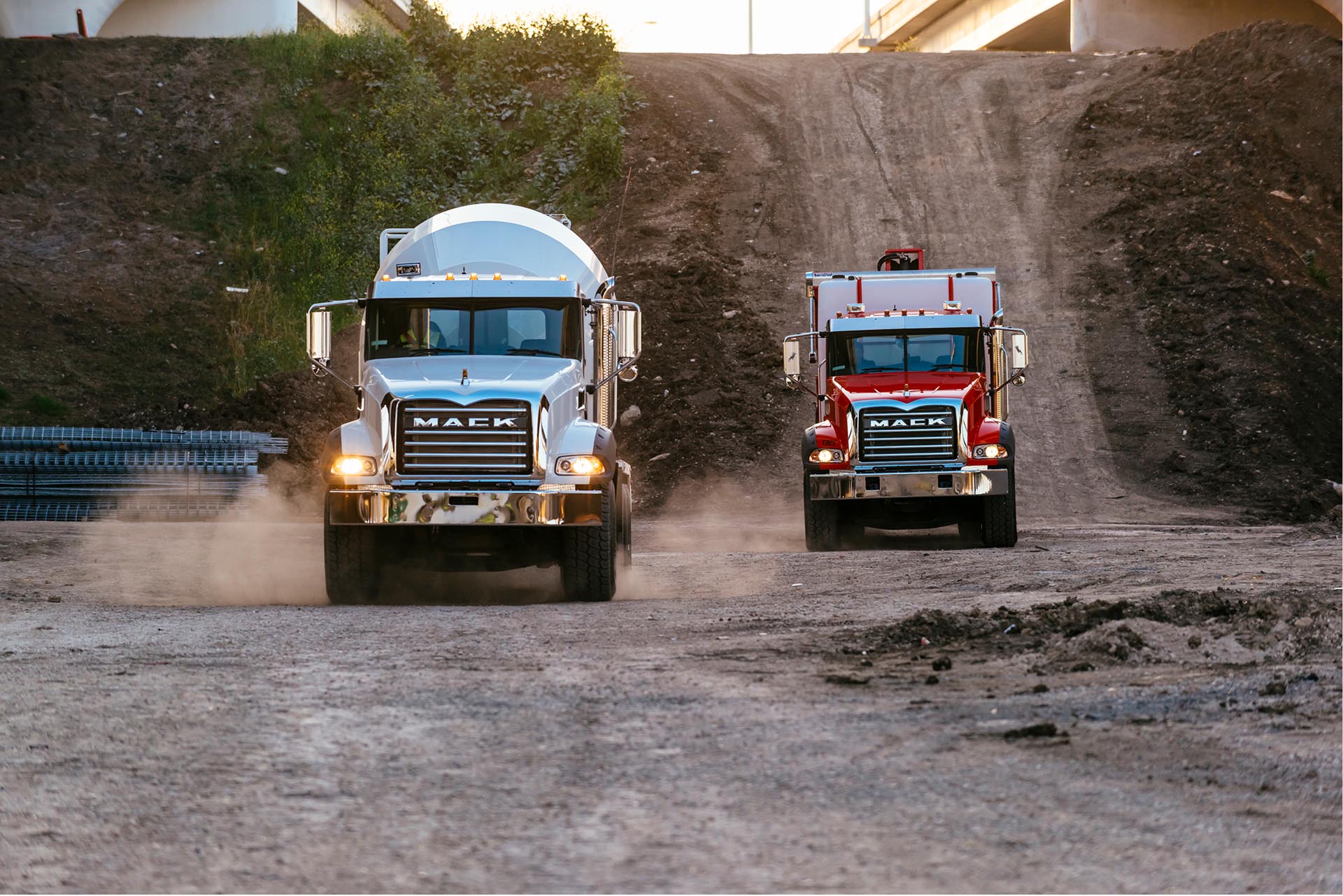