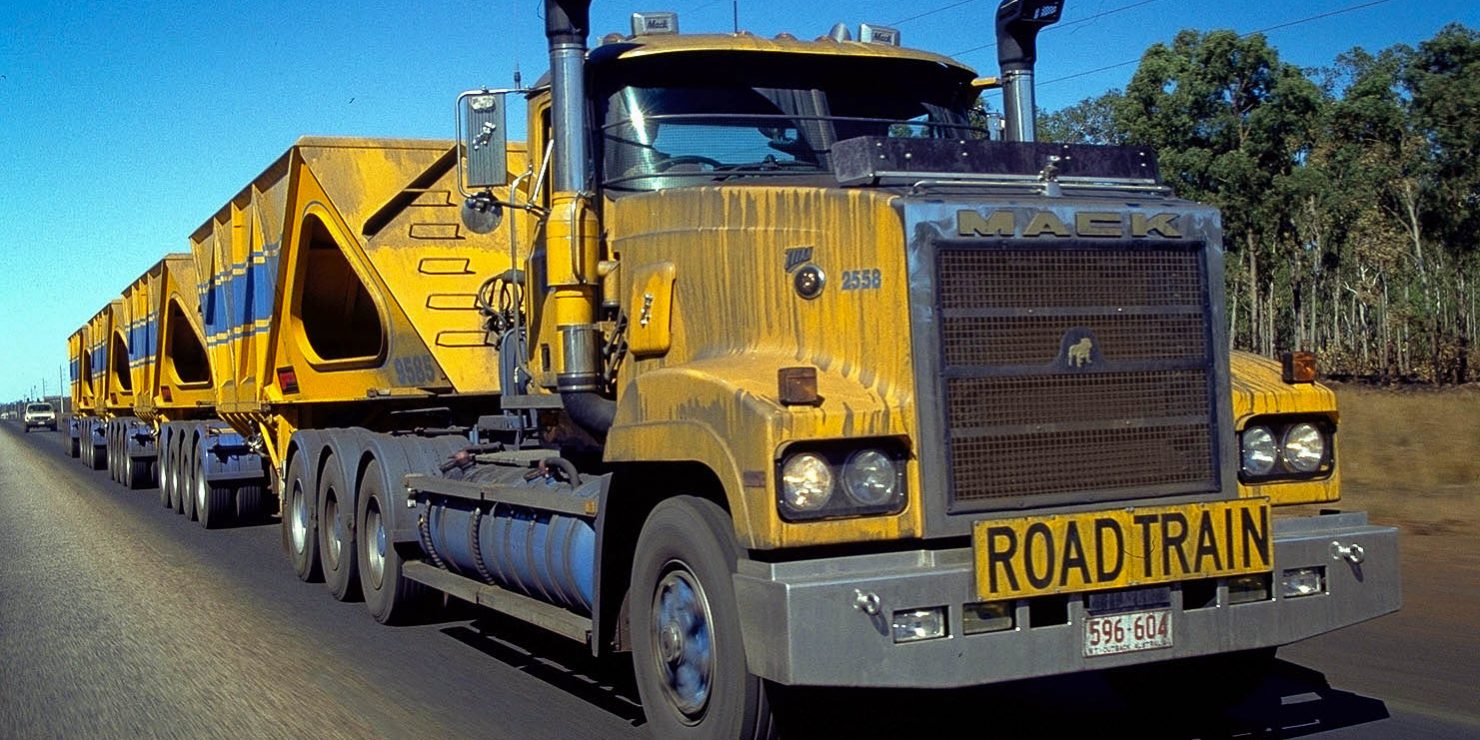 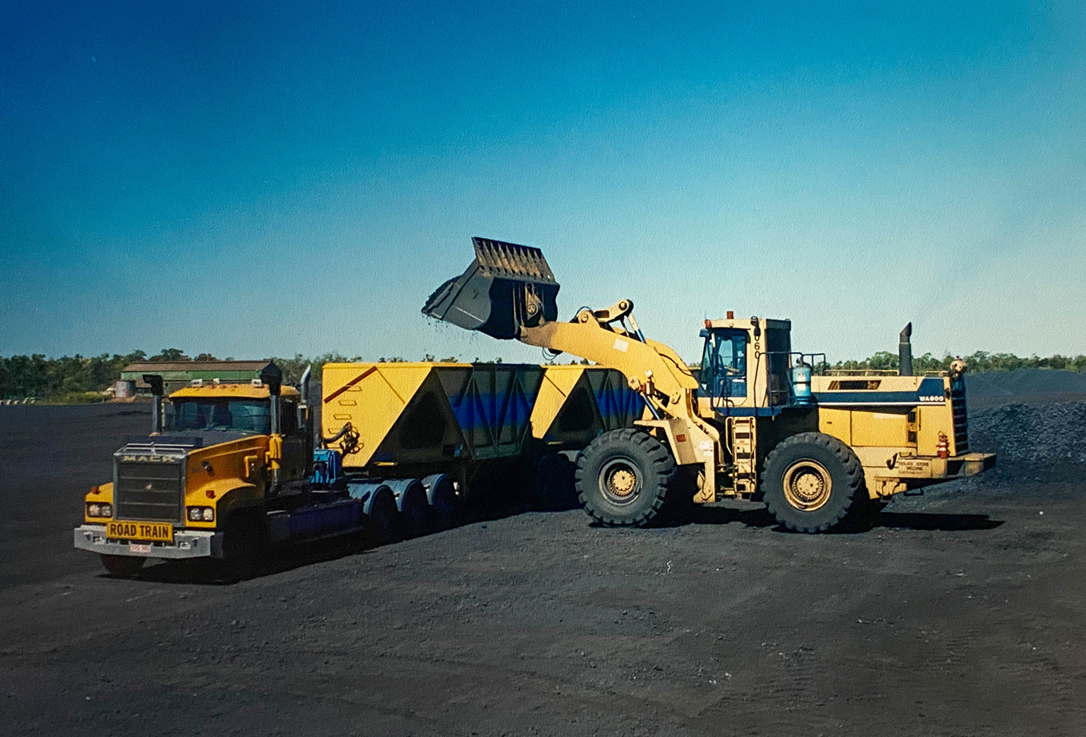 Fifty kilometres off the Australian mainland, in the Gulf of Carpentaria, roughly an hour and a half flight east of Darwin, a string of lights lit the runway of Groote Eylandt’s solitary airport. The tiny island named by Dutch navigator Able Tasman in 1644 is Aboriginal land and entry is with a permit only or as a mine guest.

With a total landmass of some 2,260 square kilometres – roughly 60 km long by 40 km wide – Groote Eylandt also boasts one of the finest manganese deposits in the world. Here Groote Eylandt Mining Company Pty Ltd, trading as Gemco – owned in a joint venture by South 32 and Anglo American, 60 and 40 per cent respectively – has been mining manganese since 1964 with special mining leases granted by the Commonwealth Government and Traditional Aboriginal owners. 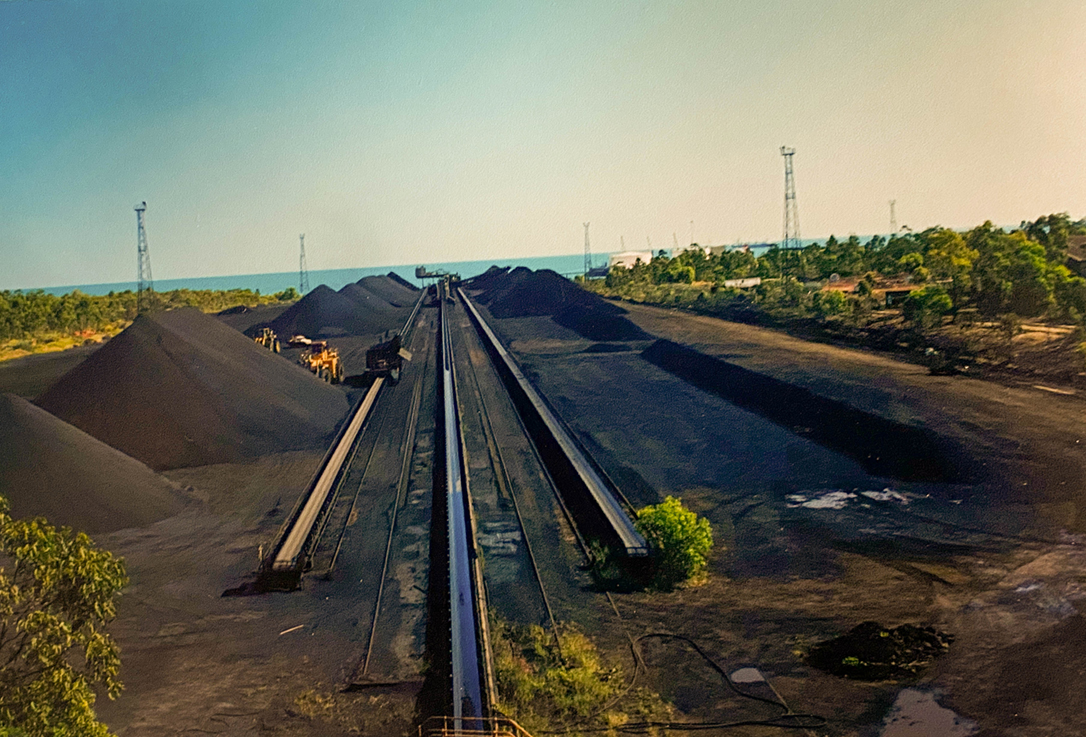 A South Australian Government geologist first discovered traces of manganese on the island as far back as 1907. More than a century earlier, Matthew Flinders wrote, “there was evidence of the mineral in the Blue Mud Bay area of the Island.” It wasn’t until 1962 that the economic significance of Groote Eylandt’s ore deposits was realised by geologists working for Gemco’s former owners BHP. It was another four years before the first shipment of manganese was transported to Gemco’s sister operation, the Tasmanian Electro Metallurgical Company (Temco), which produces ferro-alloys and manganese sinter. Today Groote Eylandt export manganese worldwide primarily for use in steel production as a strengthening agent. Manganese and manganese alloys reduce unwanted sulphur and oxygen and prevent brittleness.

Gemco’s Chief Mining Engineer, Andrew Hocking, extended his hand. “How was the flight?”

“A little bumpy at the end but at least we left on time,” General Manager of J Smith and Sons Pty Ltd. Kerren Smith replied. “How have the trucks been working?” 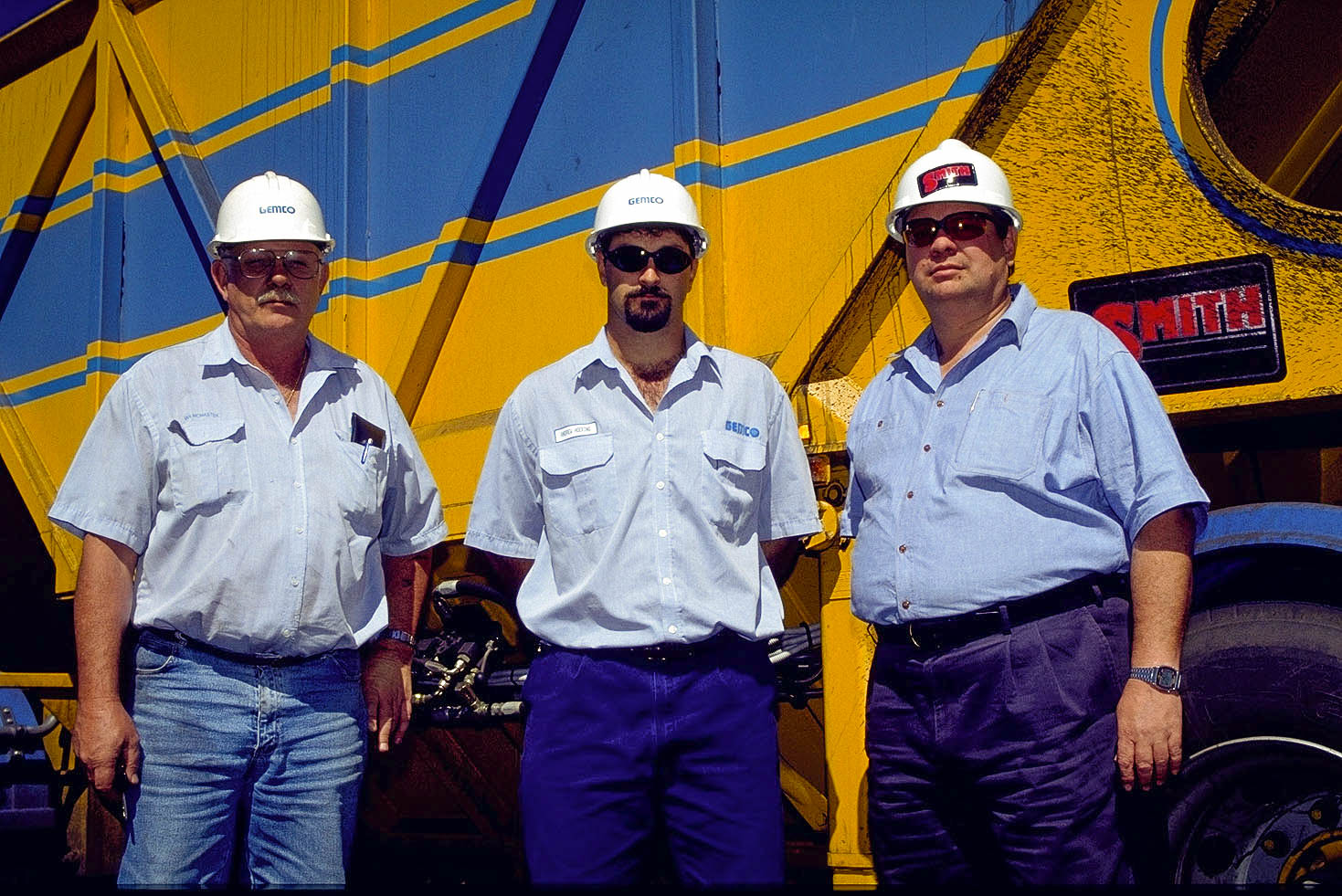 Kerren was on the island to commission twelve new purpose-built bottom dump trailers built at his Gympie factory. Also on the island, Mack’s Steve Schostakowski and Cummins’ Darwin Branch Manager Armand Lemoine to provide product training on all aspects of the new road trains.

The new vehicles, dubbed “an innovative road train concept” by the Northern Territory MVR department, are the result of a long-term feasibility study and much research by the Gemco road train project group headed by Andrew Hocking. The group consisted of representatives from all aspects of the mining operation. In the selection process, many factors were considered outside the immediate truck specification parameters. “General road transport could gain a lot from embracing a combination such as this,” an MVR spokesperson said.

“What you have to appreciate and understand is that the average age of the trucks; these new D-Quads are replacing is almost 20-years,” Andrew explained. “Don’t get me wrong; they did a magnificent job. And it’s a credit to our predecessors that they specified vehicles that we could get such a long term return on our investment. Still, technology has come a long way in 20 years, and there are many economic and productivity gains to be had from new technology and equipment. 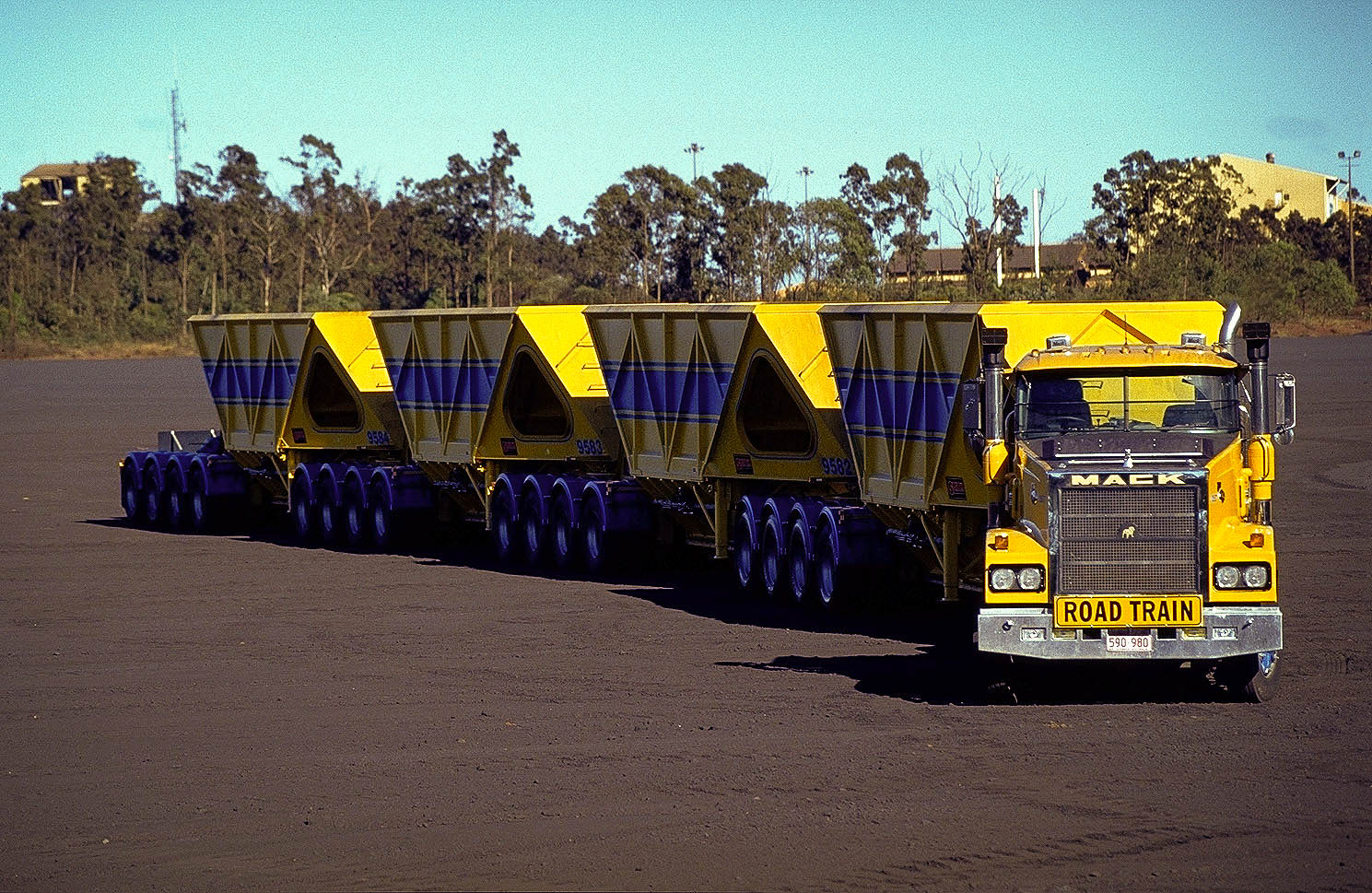 “Basically what we wanted was something that would reduce the high cost of maintenance, not only in terms of the vehicles but also in terms of the road, and provide productivity gains as well,” Andrew continued. “Essentially, what we ended up with are three trucks to replace five, so just in capital investment alone, we have realised significant savings.”

At the time of writing the current annual Gemco haulage task represents 1.8 million tonnes of high-grade manganese product that is hauled from the mine site to the nearby port over a 17 km distance, 16 of those on the shortest gazetted highway in Australia – the Rowell Highway. 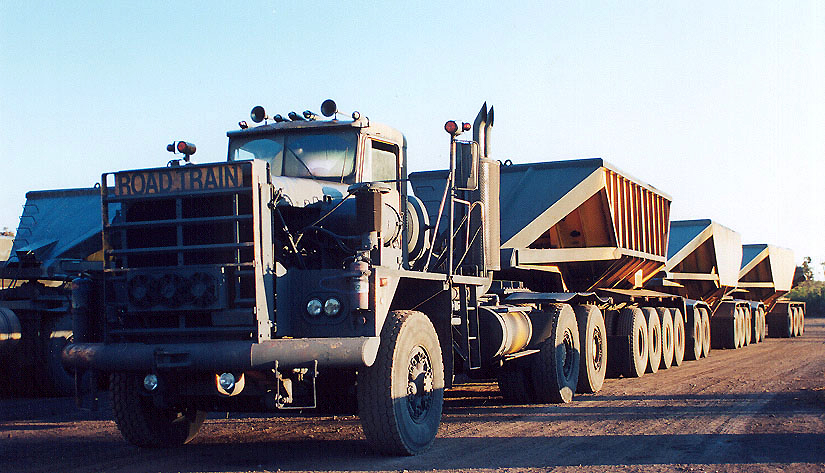 The older trucks, fully imported Canadian Kenworth 850WRs off-road logging prime movers powered by 1710 Cummins V12 engines rated at 750 HP and coupled to Allison six-speed automatics, towed a hodge-podge of triple road train configurations. The lead trailer consisted of a quad-axle trailer connected to a bogie dolly and tri-axle dog. The second dog was a bogie trailer coupled to a bogie dolly with an overall body and axle width of 3.18 metres and axle loads of up to 18 tonnes per axle. These trucks offered limited interchangeability and were slow and cumbersome to uncouple.

Interestingly enough the Rowell Highway may be a gazetted state highway and open to both the public and Gemco vehicles. Still, its construction, rehabilitation and maintenance are funded entirely by the mining company. So the issue of road wear is very significant. Commissioning wider off-road trucks would require broader shoulders at significant capital outlay; hence the preference for highway width vehicle specifications and lower axle loads. Ironically, while Gemco constructs and maintains the road system on the island, they must register and pay stamp duty on all their vehicles. And in case you are wondering, the NT Government MVR department pocketed a cool $32,000 for each of the new Mack D-Quad combinations – not a bad money-spinner for no effort other than some paperwork.

“We discussed our needs with several manufacturers then went and visited several mining operations, through central Queensland and Western Australia on a fact-finding mission to see different makes and combinations in operation,” Andrew explained. “From that, we then sat down and worked out what features from each would best suit our operation and provide the best productivity and economic gains for our needs. We are pleased with what we came up with.” 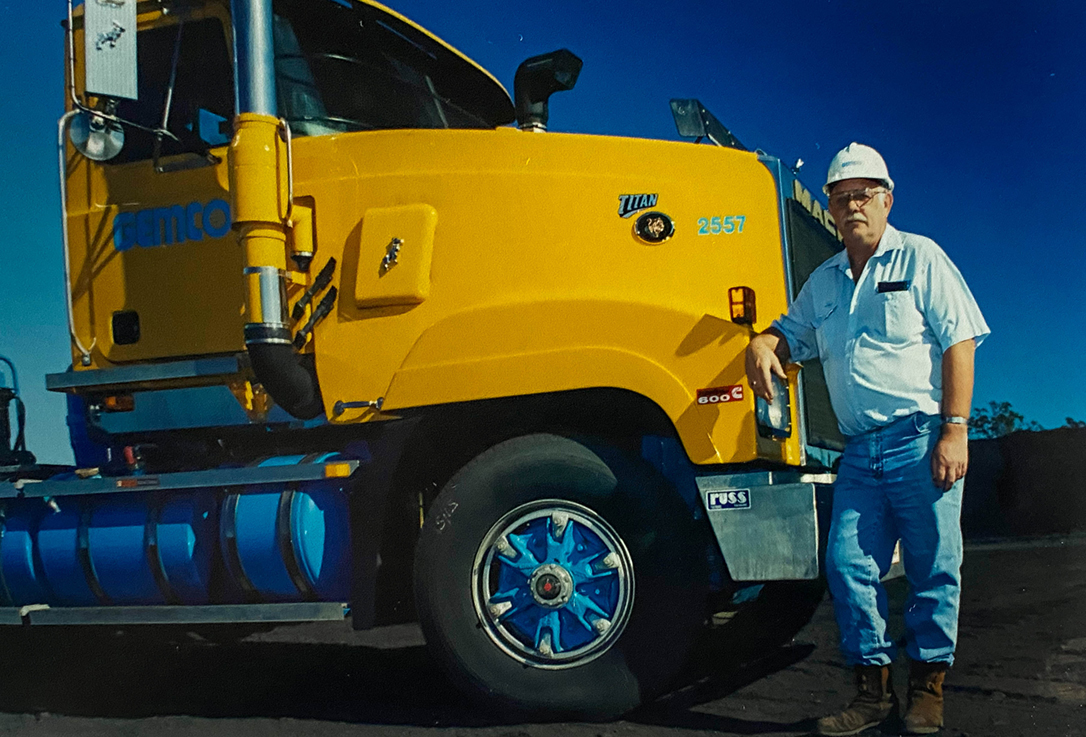 The decision to go with Smith trailers and the Mack Titan was not one taken lightly. Both Andrew and Mobile Maintenance Supervisor, Ian McMaster, cited Smith’s first-class engineering team and their finite analysis procedure and proven track record within the mining community as critical features in selecting Smith’s as the trailer supplier. “Another thing which impressed us was the simplicity of the design, construction and choice of materials,” Ian explained. “Simple things like changing the wear plates inside the bodies. This time around we had all the trailers built identically, so if there’s ever a problem, we can slot any trailer into any part of the combination. There’s minimal downtime this way.”

“Here on the island we are fairly self-sufficient,” Ian continued. “But we do need to know that a manufacturer can provide prompt backup service without making excuses. Mack has shown that they can do this and from what we saw in other applications, their products are reliable and perform well. We already have a great working relationship with Cummins as much of the mine’s plant is either Cummins or Cat powered. Let’s grab a hardhat and go for a run, and you can see how they are going for yourself.” 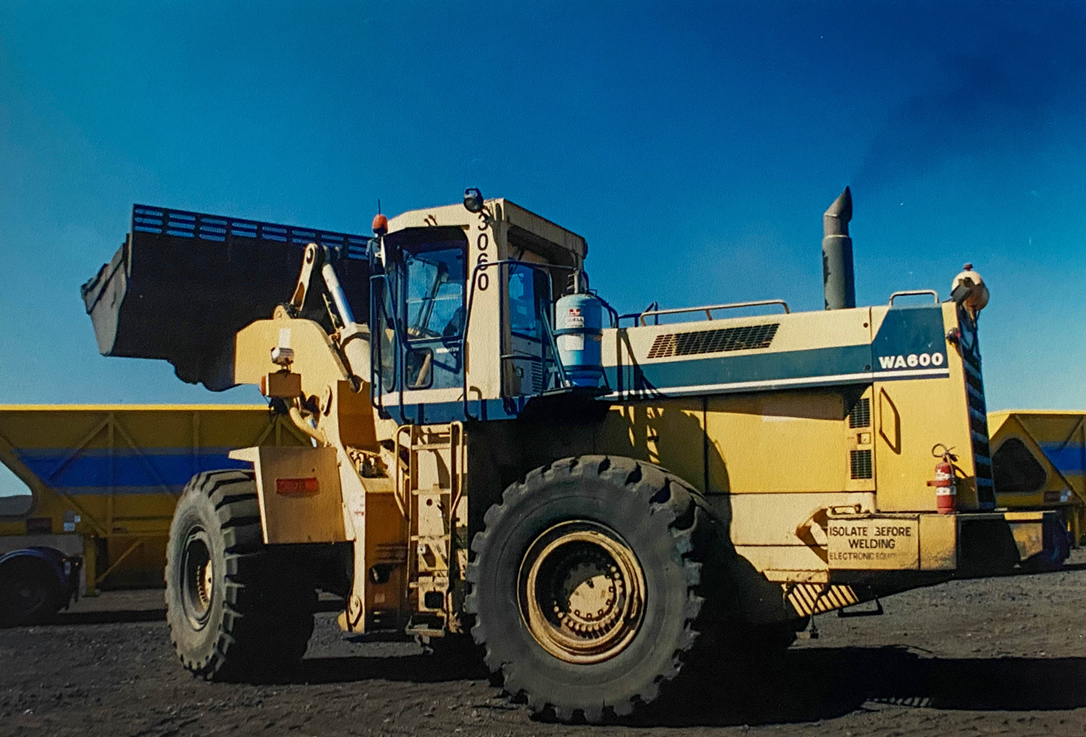 A few kilometres from Ian’s workshop, the roar of a WA600 Komatsu loader burying its bucket into a heap of processed manganese drowned out the idling Signature 600 Cummins in the waiting Titan. Three gigantic bucketfuls and the loader driver honked the horn signalling the Titan’s driver, Lloyd Scott, that it was time to move forward to load the next trailer.

“You picked a great day to come for a ride,” Lloyd said sarcastically, as he introduced himself. “Today is the first time I’ve been in this, and I haven’t stirred a manual box for years. Those old girls of ours were autos, you know.”

The loader’s horn honked for the fourth and final time. Lloyd released the maxi brakes, slipped the stick into bog cog, eased the clutch out, and slowly squeezed on the throttle. The 600 horsepower Cummins’ deep beat hastened as Lloyd built up the revs to around 1800 rpm and about 160 tonnes of manganese plus 50 tonnes of truck and trailers were mobile on their way to the port. Lloyd grabbed a full gear, then another, then another before slipping it into seventeenth at the base of the long pull up the only rise on Rowell highway.

Lloyd settled back into the seat. The next ten kays into the port were downhill, if only slightly. He glanced at the gauges. “The coolant’s running a little high,” he mentioned to no one in particular. The coolant gauge indicated around 98 degrees; Cummins’ Armand Lemoine confirmed later that it was the normal operating temperature for these big red engines. 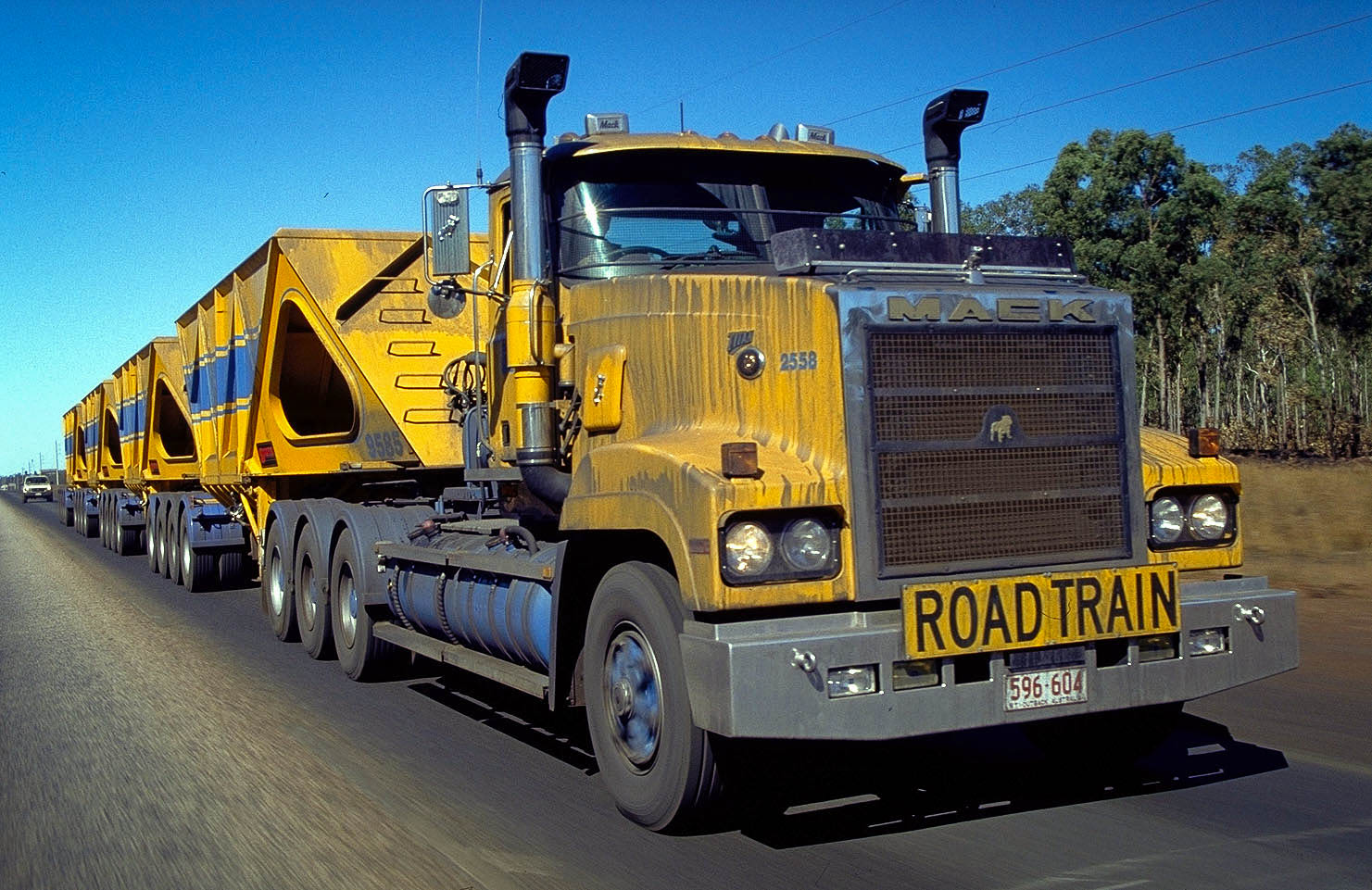 The ease with which the Signature 600 handles the 220-tonne GCM is staggering. These extra heavy-duty Titans pack some significant specifications in terms of driveline components. Due to the relatively short lead (17 km), Gemco decided to specify a final drive ratio of 6.58:1, which provides exceptional startability and gear binds the trucks to around 80 kph. The tridem rear axles are Renault PMR3545 front-mounted carriers rated at 34,450 kg with transmission driven oil coolers.

The distinct sound of the Signature 600’s engine brake quickly slowed the unit up for the sweeping left-hander leading to the newer of two dump stations. Lloyd stopped with the first trailer’s bottom doors over the grid. Alongside the driver’s seat, a series of switches enables the entire unit to be discharged from in the cabin, a luxury not enjoyed on the older units.

A touch over 30 seconds later, Lloyd pulled the next trailer forward and repeated the procedure. The driver’s door opened when the fourth trailer rolled over the grid, Lloyd walked down and opened the underbody discharge doors using the trailer’s levers.

“I can discharge this trailer from inside the cab too,” Lloyd pointed out. “But I need to check my tyres, so if I open the door down here, I can easily see what is happening and check the truck at the same time.” 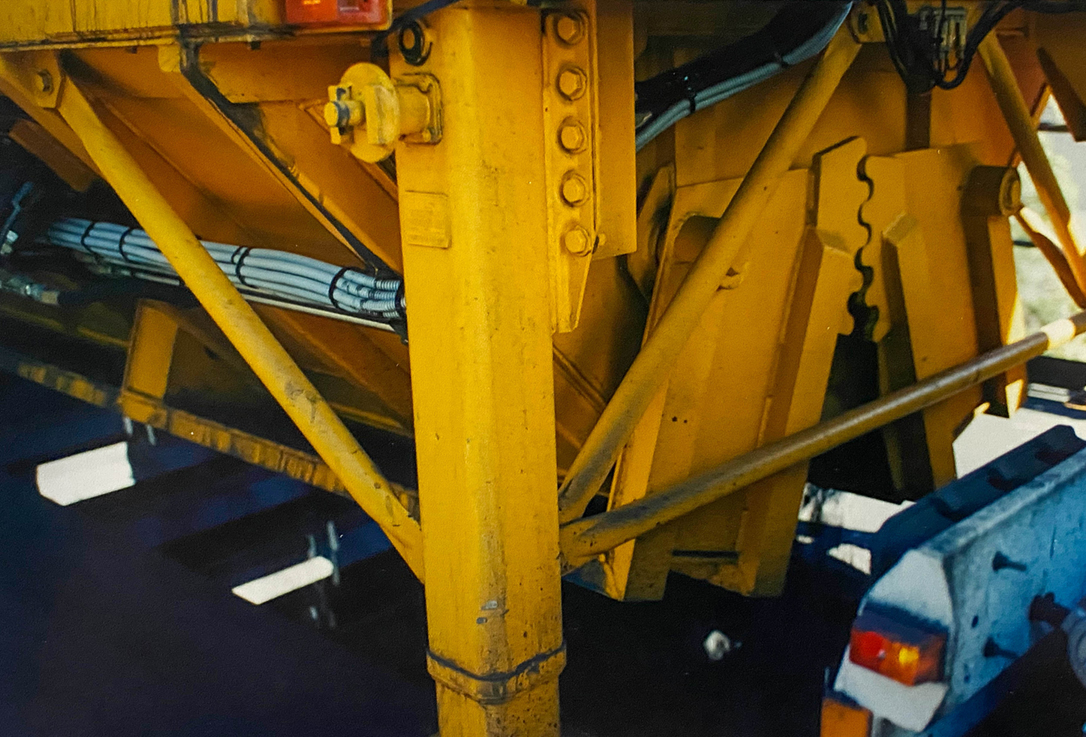 After the 48.5 metre stroll back to the cab, Lloyd again eased the stick into low and the massive unit was on its way back for another load. In the distance an oncoming Titan grew larger in the windscreen, Lloyd raised his right hand as the unit passed.

“What did you think of that?” Ian McMaster asked. “We’ve only had them working this week, and so far they are starting to show signs of improved trip times as the drivers get used to them. We are training 11 drivers at this stage, so we envisage they will improve even further as each driver becomes more familiar with the units.

“We did some estimates for fuel usage, and one is averaging 1.1km/l and the other 1.2km/l – that’s off the pro driver display. It’s much better than we envisaged in the planning stages. We would expect that once the training cycle is over the economy will increase, every little bit helps.”

The new units have an enormous task ahead of them; collectively, they will complete some 10,900 trips from mine to port annually. While it’s unlikely that these units will better the 20-year service life of those they replaced, there is an underlying goal to shave a massive $1.40/tonne off previous haulage costs. Will they do it? Only time will tell of course, but so far things are looking good for the Cummins powered Mack Titan D-Quads.