This robust suspension system has carried the Bulldog Breed for more than seven and half decades. In fact, at the time of writing, you can jump on Mack’s US website and order a new current model Granite with the famous Camelback suspension for construction applications. So we asked our Technical Editor, Howard Shanks, what is unique about the Camelback suspension and why has it remained in production for over 70-years? 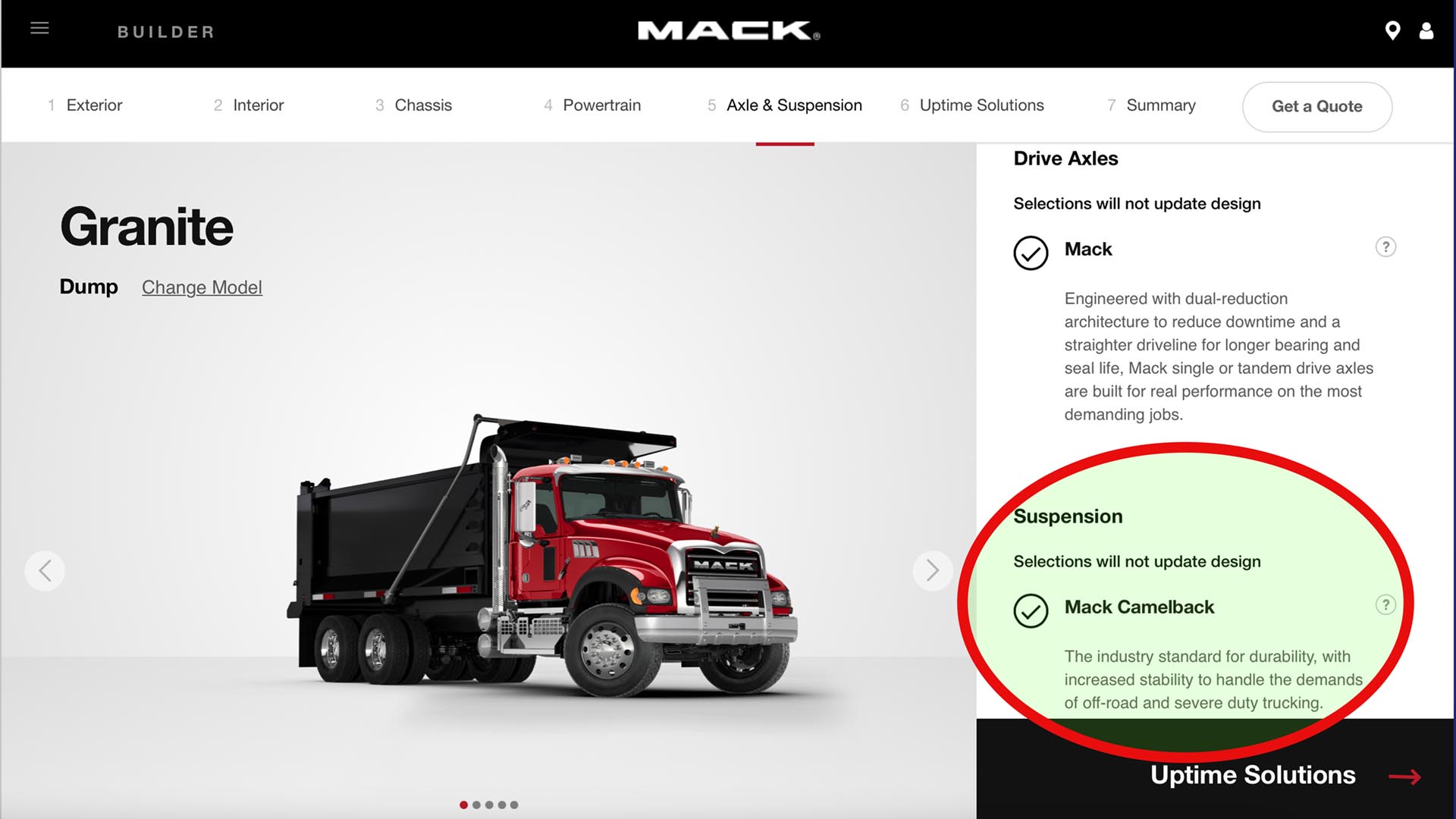 When introduced, Mack’s Camelback tandem suspension differed significantly in design from other suspension systems on the market. Most noticeably, the main trunnion is centrally located between the rear axles. In addition, it supported a high arch spring pack that rode up over and pivoted around the trunnion. The spring pack resembled the hump of a camel’s back when viewed from the side. 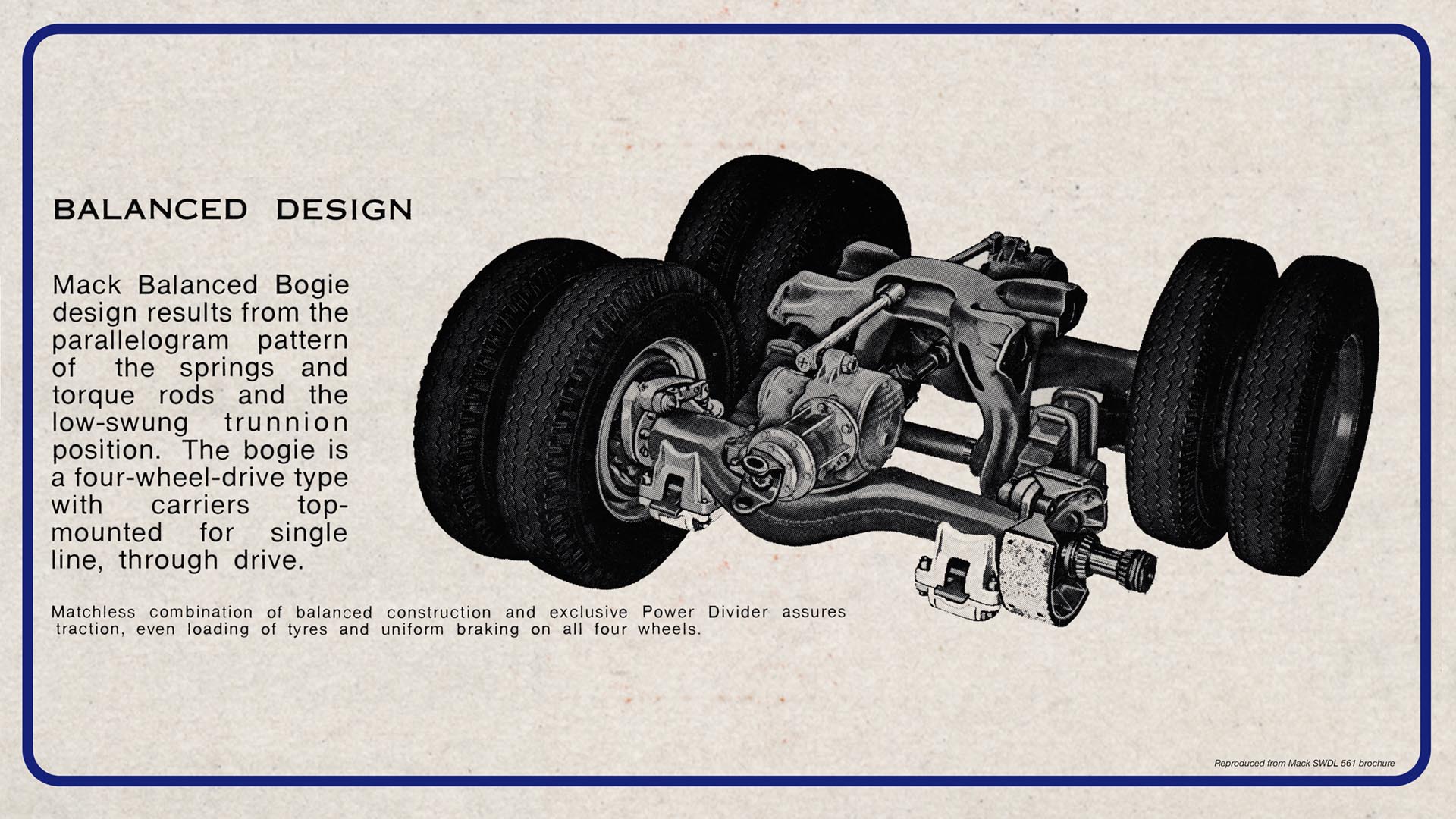 Mack packaged their Camelback suspension with their top-mounted carriers – or upside-down diffs, as some people called them. Their marketing literature described the complete assembly as ‘Balanced Bogies’. And they were good! Damn good. They offered a raft of features that few of their competitors could match. By the mid-sixties, the popularity of Mack’s Camelback was driving their market share to record heights. Locally, in the Australian outback, Mack’s B-Models were reliably carving trucking routes over horse-drawn tracks. 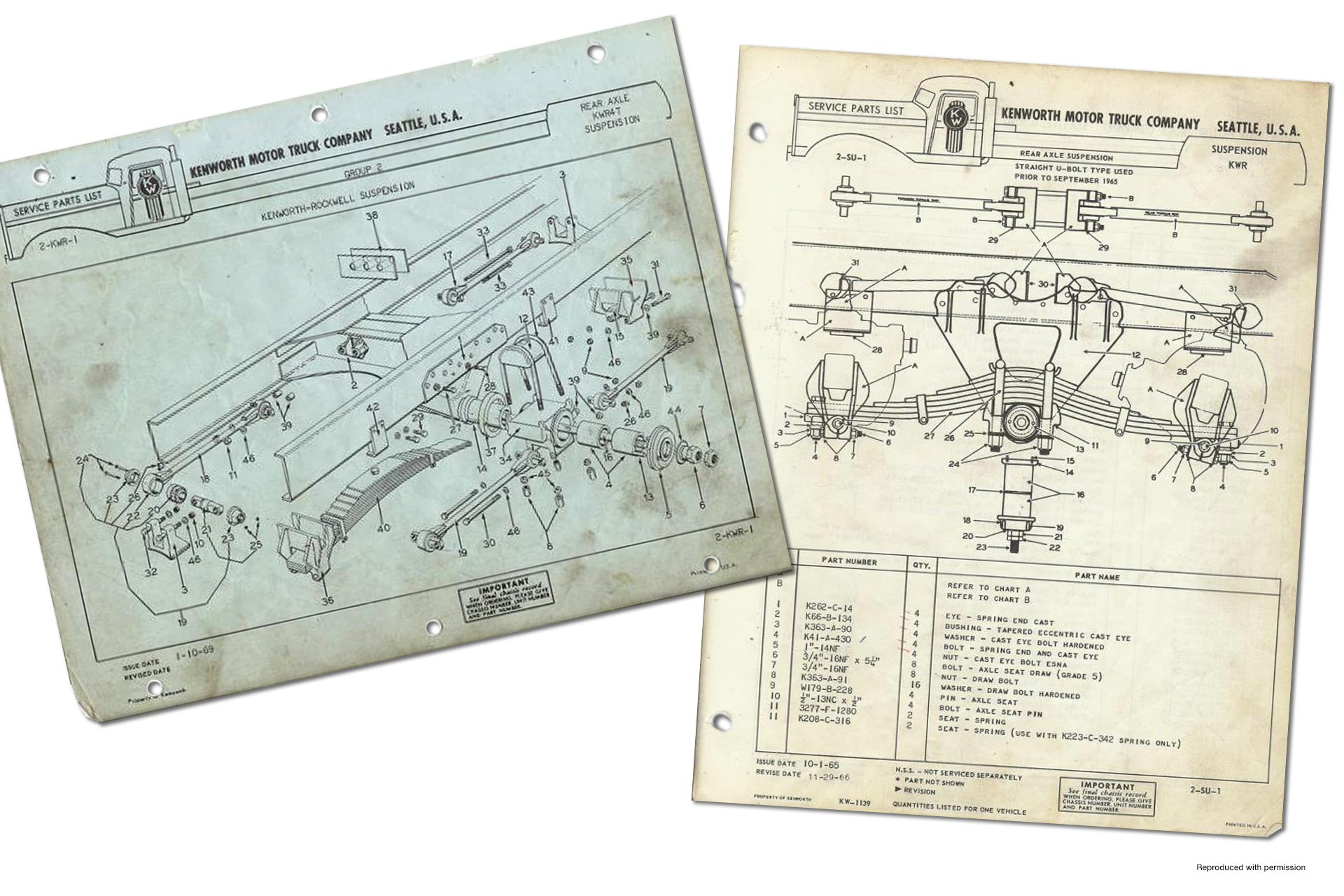 So popular, in fact, was this suspension that copies of Mack’s successful Camelback were offered on other brands of trucks, as illustrated in this page from a 1965 Kenworth parts book. A 1970s Diamond Reo brochure lists a Camelback copy rather unimaginatively as a “Notched End Multi-Leaf Suspension”. 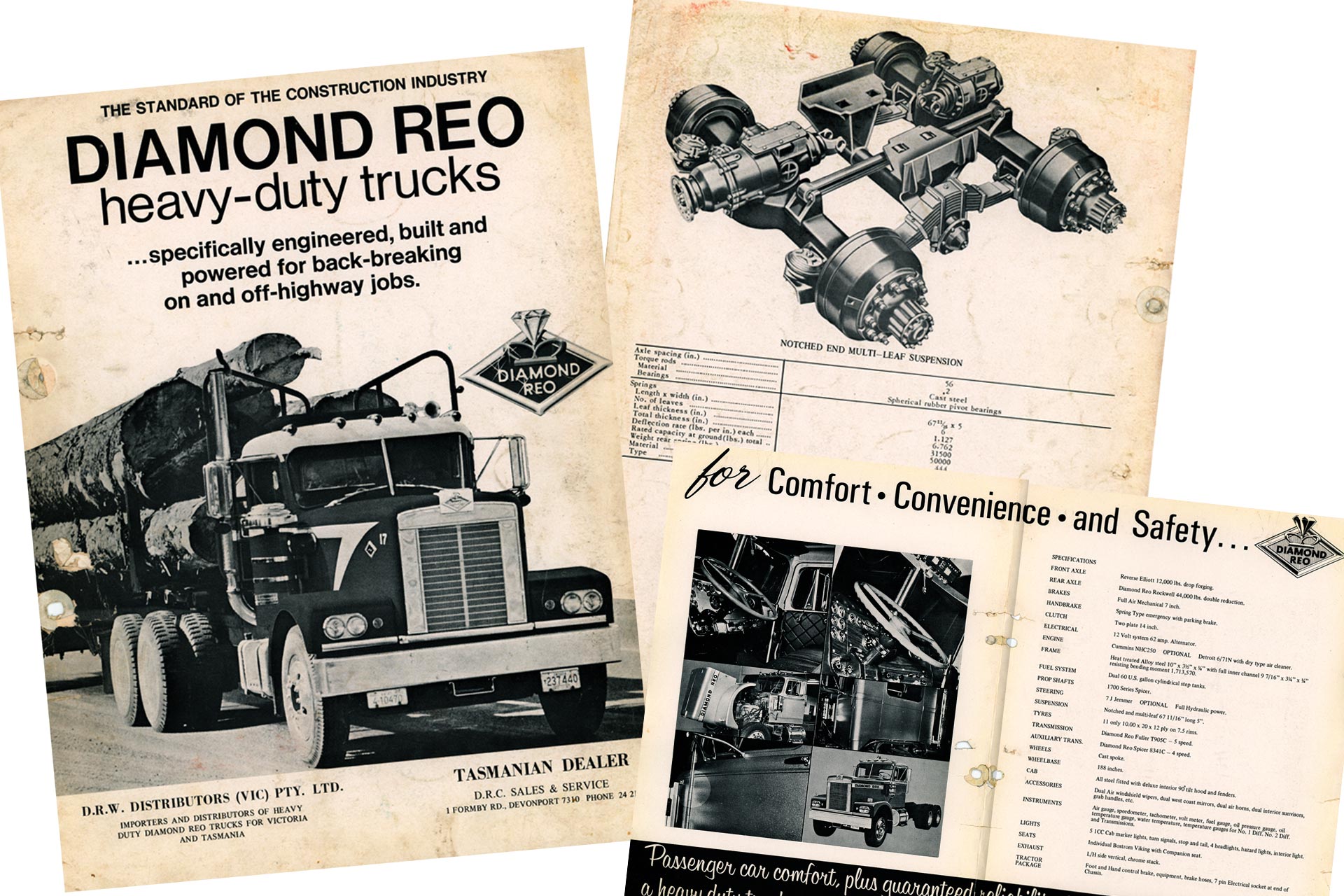 History has shown that the ‘Balanced Bogies’ were the master in any terrain and delivered enhanced traction, balanced braking, minimised axle hop during braking and acceleration, distributed the load evenly between the forward and rear axles and improved tyre wear.

Their unique parallelogram design distributed weight evenly during regular operation, as indicated by the solid line in the diagram. When braking and accelerating, weight distribution is proportional as indicated by the dotted lines, but the load is still shared across both axles due to the parallelogram concept. In addition, the top-mounted torque rods counteract bogie hopping tendency during acceleration or braking. 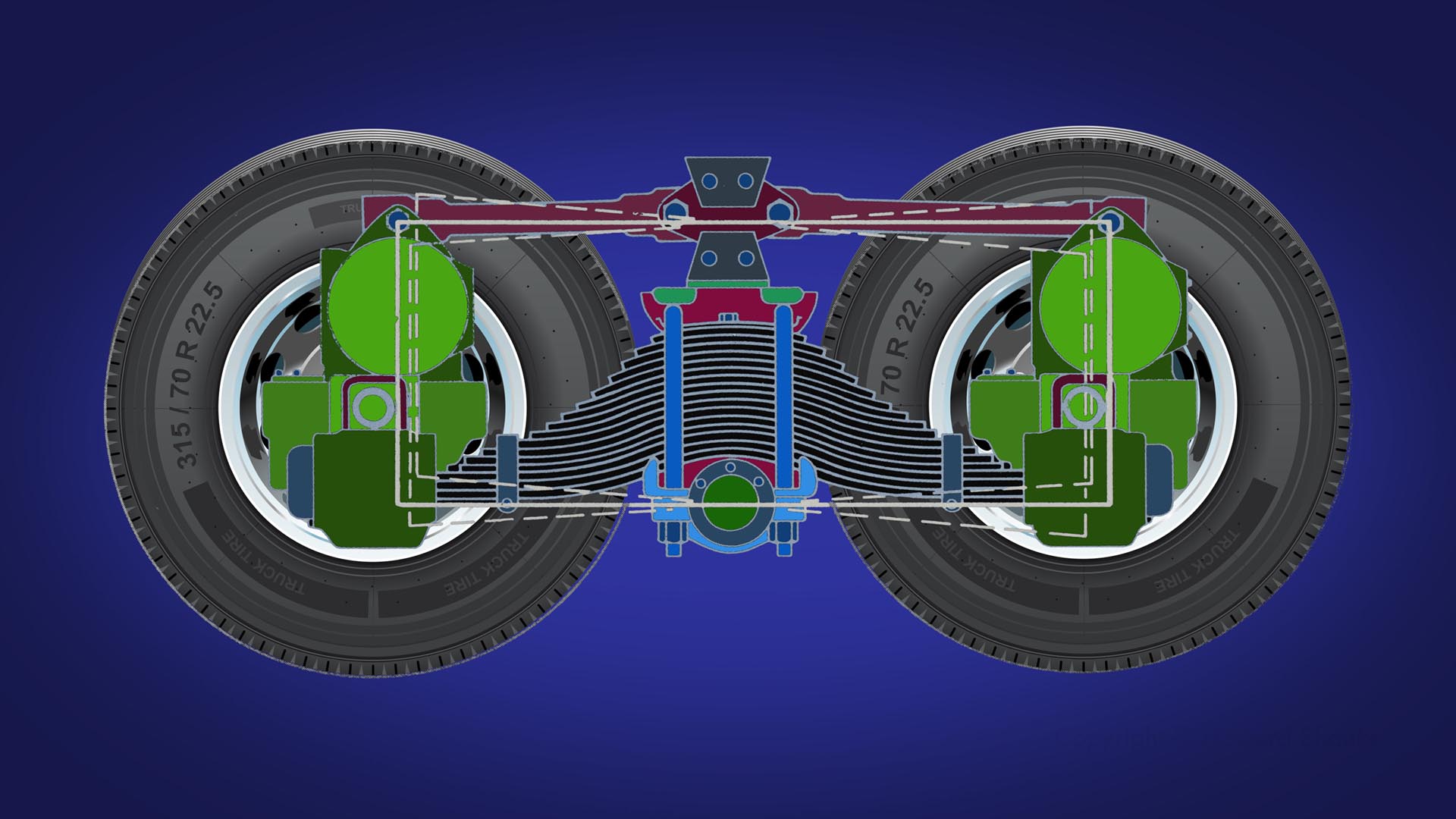 Another unique feature of Mack’s Camelback that the company marketed well was the suspension’s ability to extend tyre life compared to other suspension styles available at the time. In addition to the advantages delivered by the parallelogram design, the suspension’s self-steering characteristics the rear wheels of the bogie track rather than skid during cornering. By minimising the scuffing during turning, tyre wear is significantly improved. 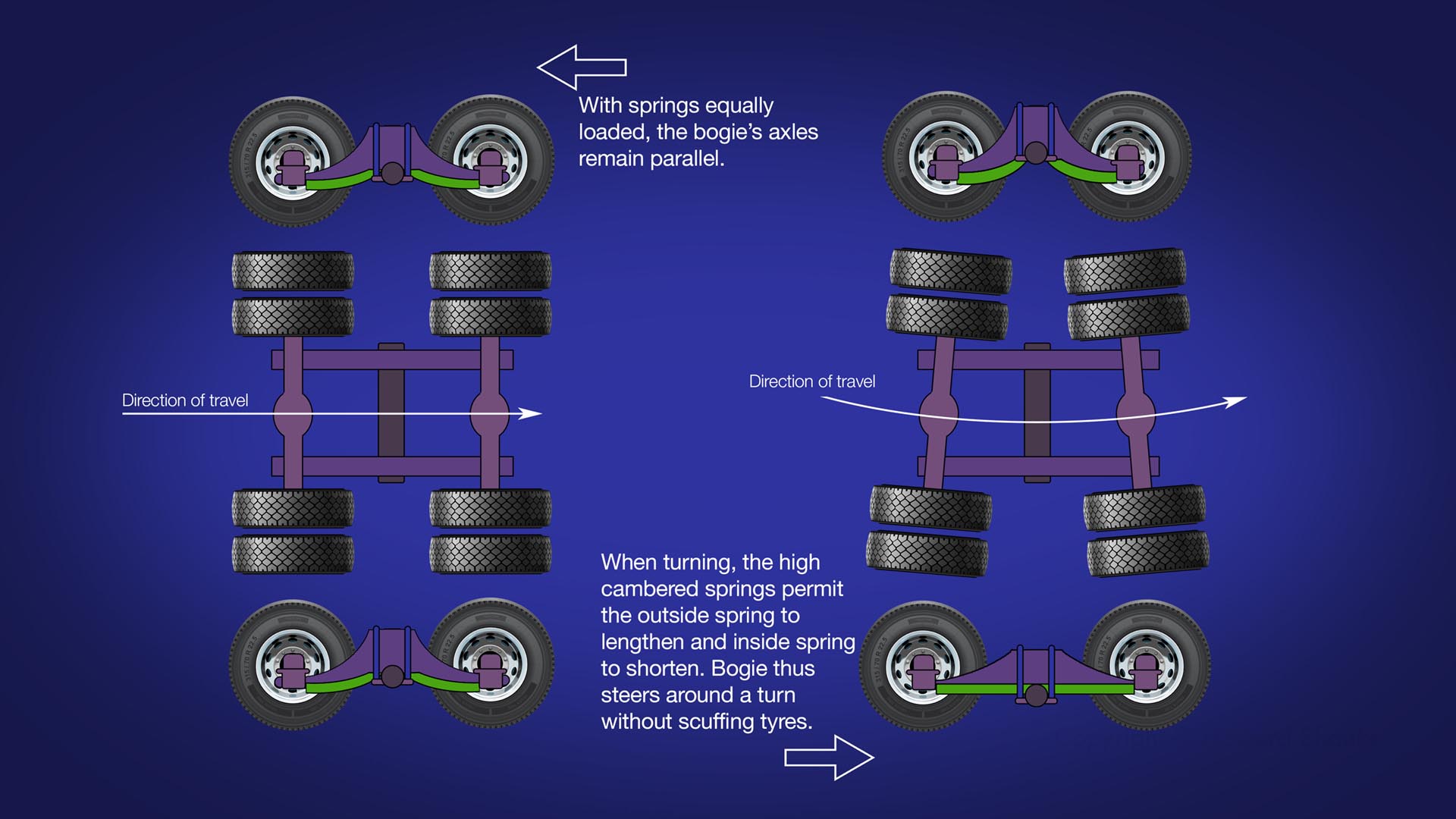 The long multi-leaf springs are anchored at the ends by large shock insulators that are freely trunnioned to the frame to provide resilient suspension action. Furthermore, the entire suspension was extremely lightweight, which afforded operators a few extra kilograms payload. But best of all, the Camelback required minimal maintenance, other than regularly lubricating the trunnion bush.

Nevertheless, it wasn’t all plane sailing, especially once the Camelback had covered a few hundred thousand miles and had a little age under its belt. Moreover, as the pads wear, their ride and handling characteristics deteriorate significantly. Yet a strict preventative maintenance schedule will go a long way in preventing on-road mishaps. 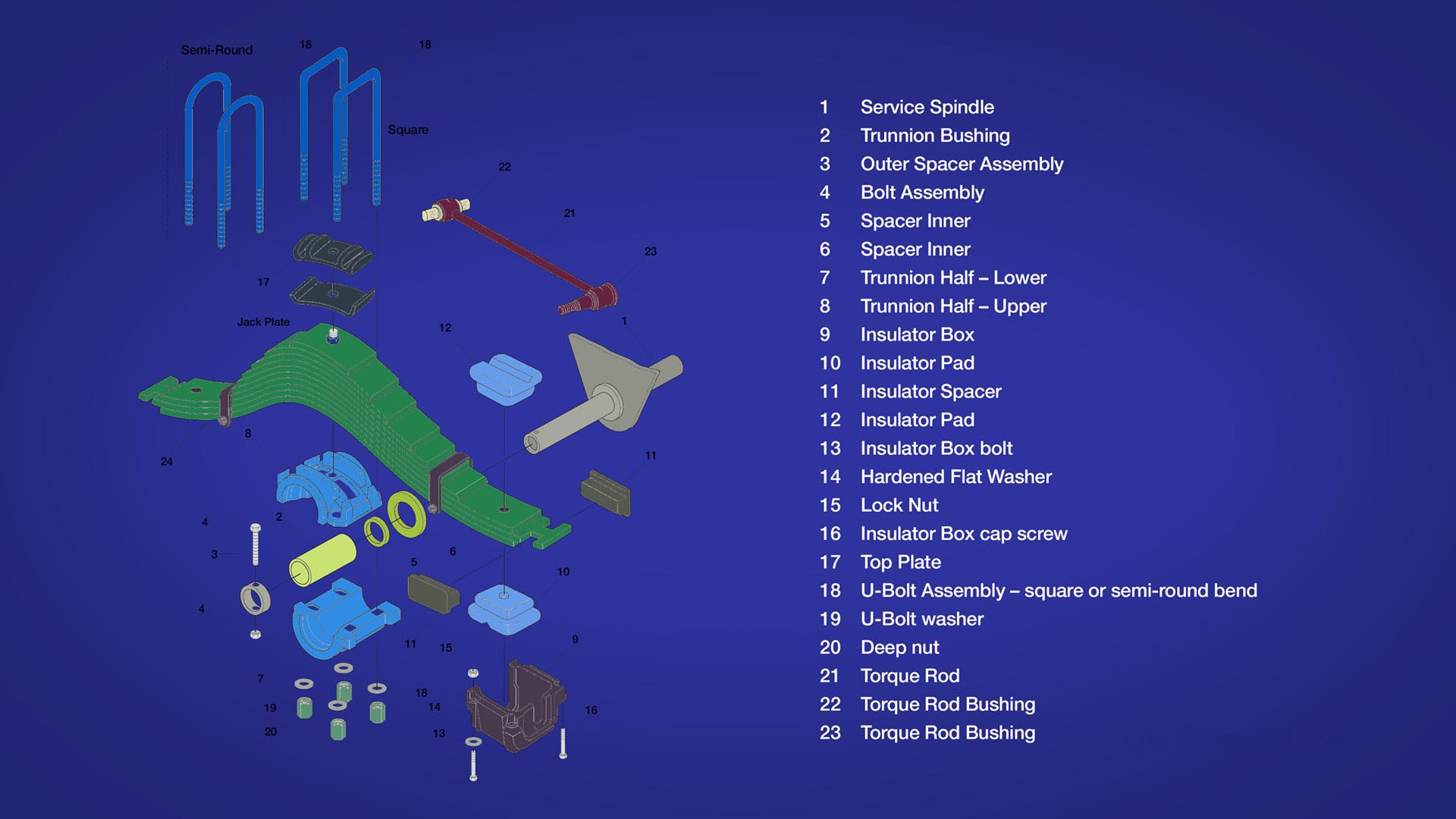 The original shock insulators, or elephant feet as they’re more commonly called, typically have high rebound properties. If you’ve ever driven an old ‘B’ or ‘R’ model Mack with a Camelback, you’ll be familiar with the term ‘Ride like a Mack’. Consequently, this unique ride sensation is caused because the rubber blocks transfer the shock through the frame, and this phenomenon becomes worse as the elephant feet wear out. Although the heavier a load the Mack carries, the less the shock subsequently gets transferred.

But there is some good news. Modern-day aftermarket low rebound no bounce polyurethane pads are designed to better act as a shock absorber to contain and isolate the shock with the polyurethane pad. Consequently, ride and handling are greatly improved. 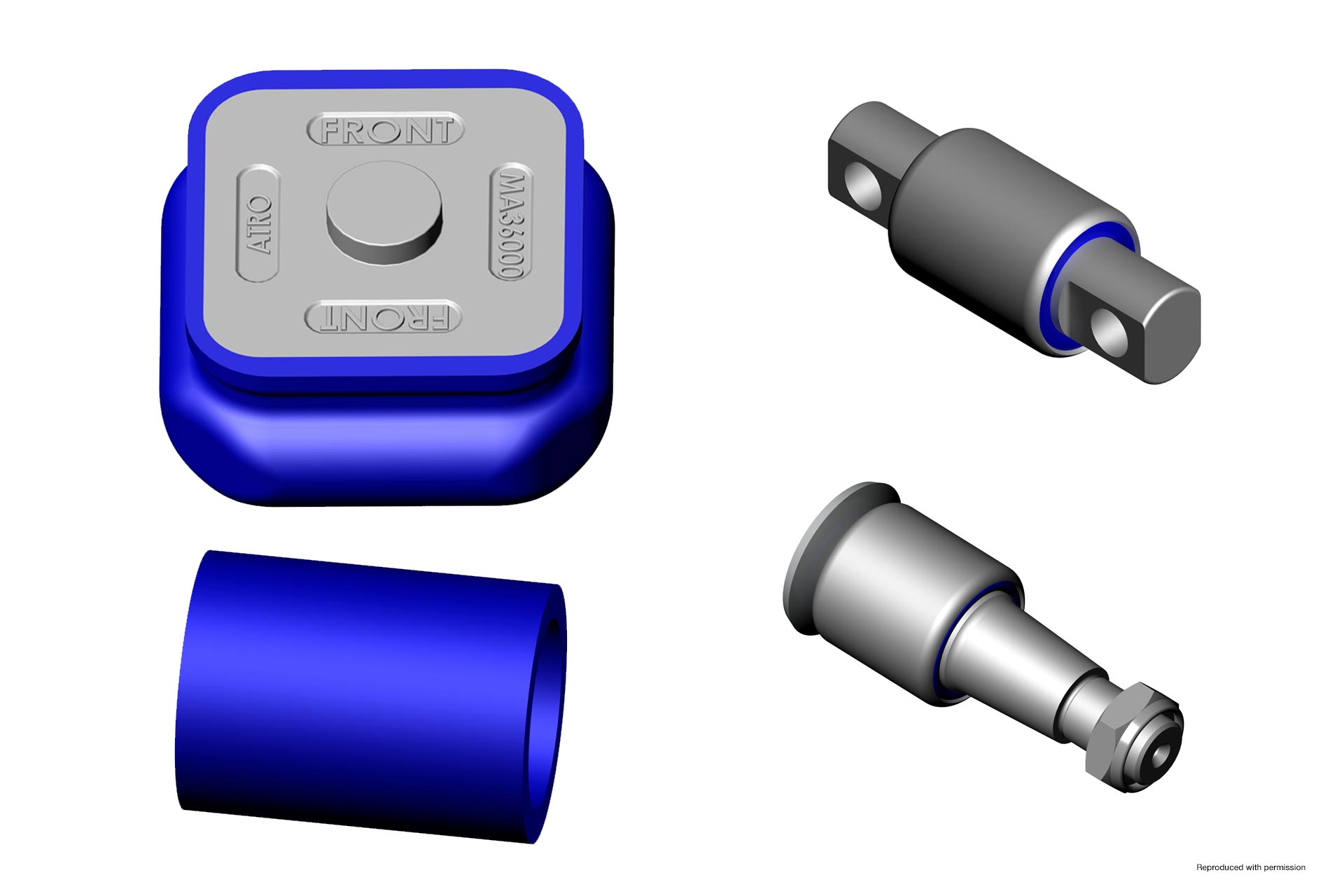 Another tell-tale sign that elephant feet are worn out is when a driver complains he is having steering problems. Typically, they’ll complain the truck is wandering all over the road. When the elephant feet are worn, the locating pin on the pad has excessive play, allowing the axles to walk or move within the insulator box rather than fixed to the correct position on the spring.

On the odd rare occasion, a leaf spring may break. Camelback springs are no different from any other spring and will fail due to fatigue by design. The wear rate or fatigue of a spring leaf is dependent on the application. For instance, if your truck is operating at a site with constant maximum articulation, then the springs are working extra hard to cope with the stresses of the terrain. Fatigue in the case of spring life is defined as a low to moderate load below the load rating of the spring-applied continuously over a long period. Normal wear is different to a single sharp high load impact on the spring. 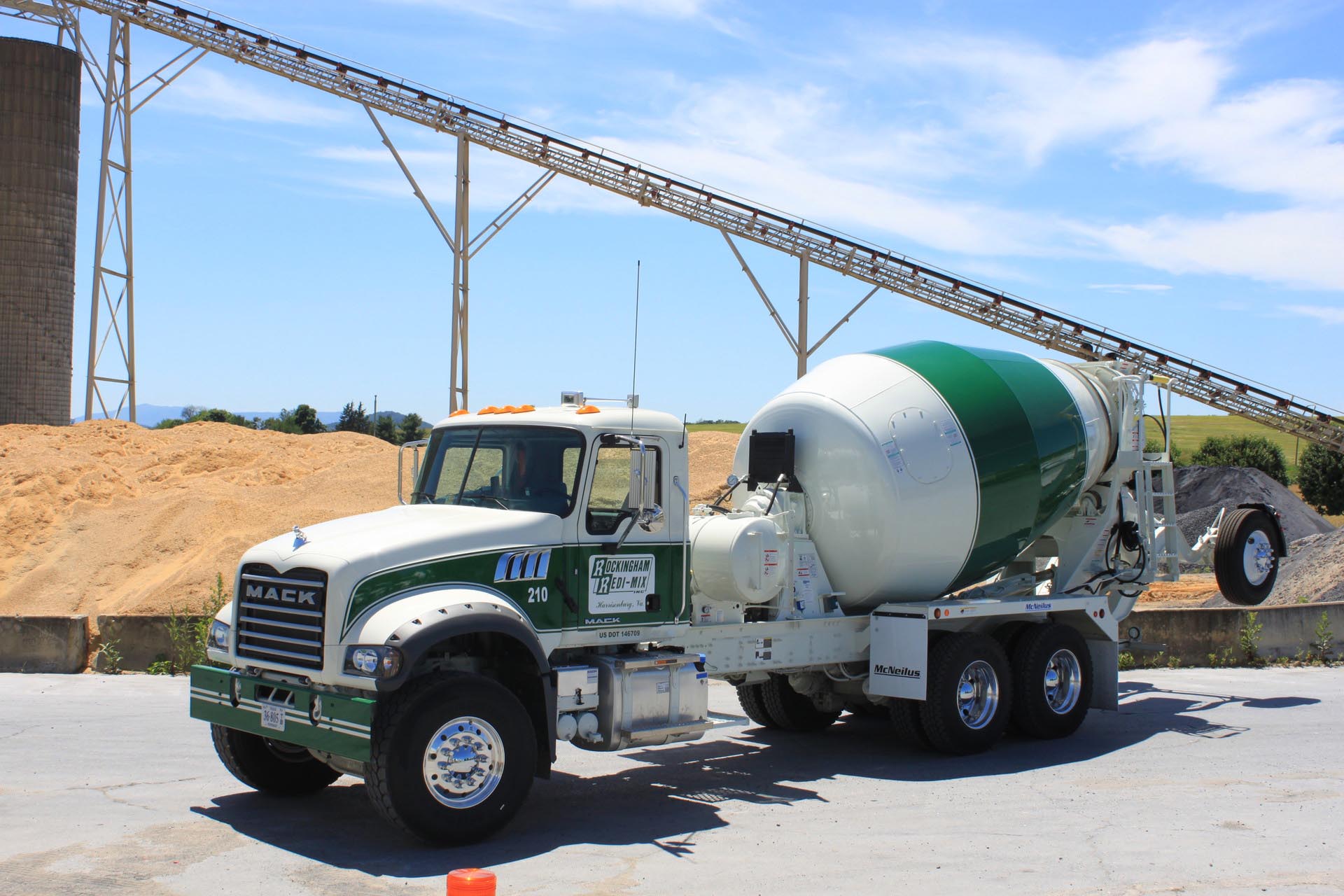 The Control Arm or Torque Rod bushes tend to wear out quicker than other suspension components as they are made of rubber. As a result, a diligent driver will notice changes in the vehicle’s handling characteristics, especially at high speed. The rear end will feel loose, and they’ll start to observe irregular tyre wear. As stated earlier, bushes made from advanced polyurethane material will give better long-term elasticity retention and durability performance.

The Camelback suspension is renowned for its tyre friendly characteristics, but occasionally, you might find one vehicle that displays uneven tyre wear across its axles. The primary cause of this is a wheel alignment issue. The best solution is to have a total vehicle alignment performed by a reputable truck wheel alignment centre. During the alignment process, the technician will identify if any suspension components have failed or worn, which will cause an alignment issue. 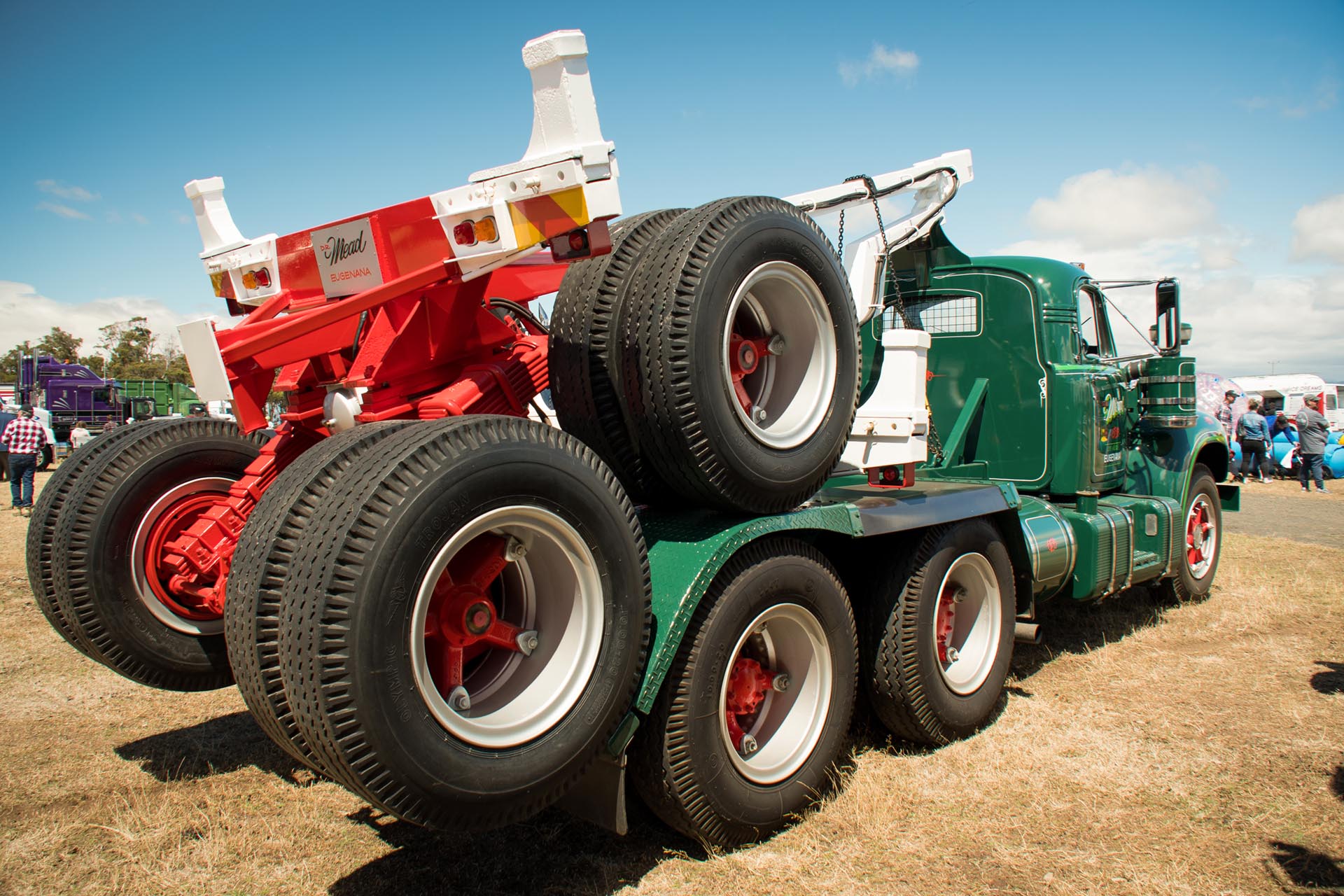 Also, as stated earlier, worn elephant feet can cause steering issues. If the rear end is steering the truck, then there is a high chance the tyres will display signs of irregular wear.

The simplicity of the Camelback design is one reason this suspension has retained its popularity over a few generations. Minimal maintenance, proven durability, and low cost of ownership indeed go a long way with operators.

Cost-wise, a complete rebuild kit will set you back approximately $1856 for the parts only. 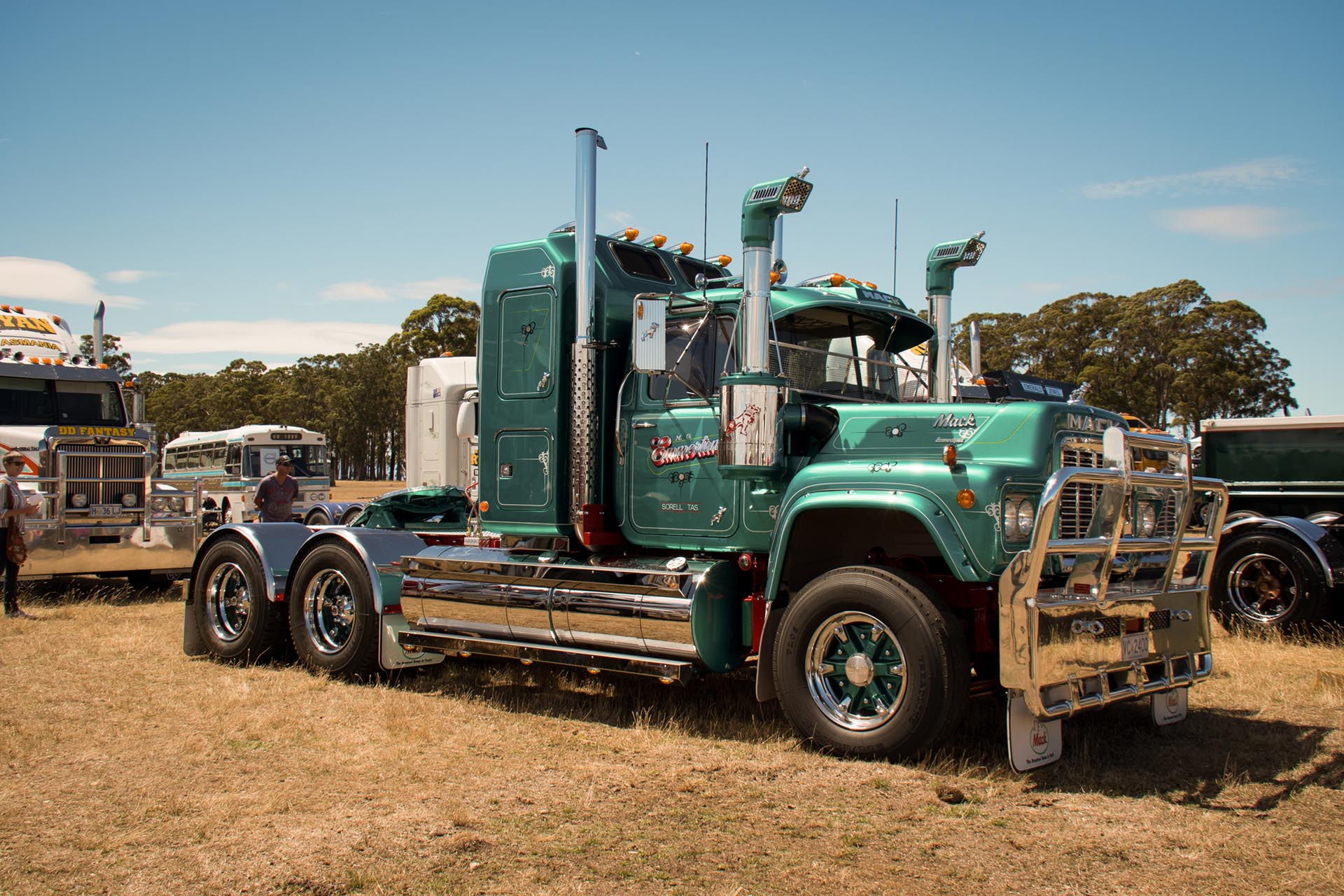