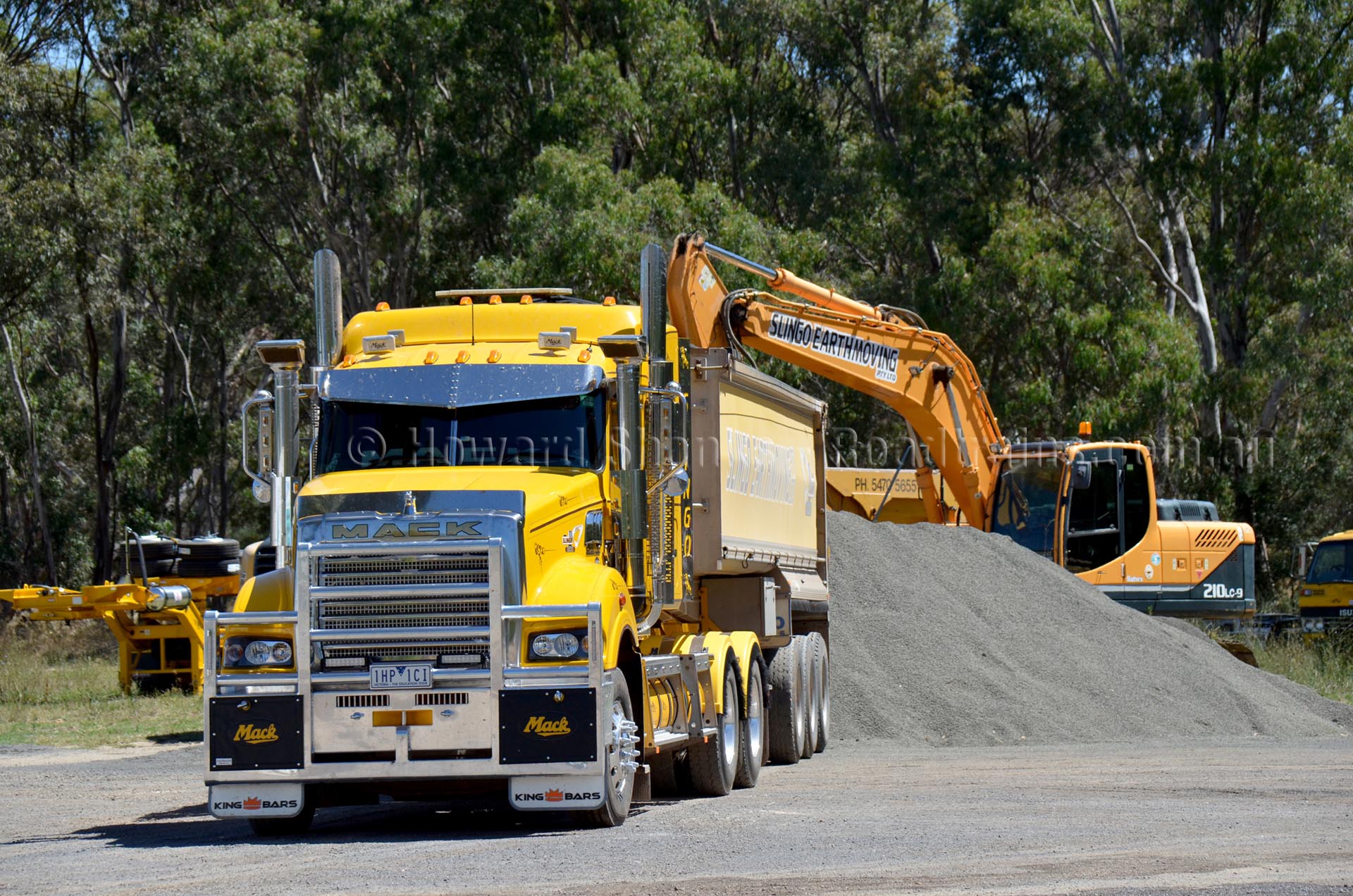 Slingo Earthmoving have had Mack trucks working in their operation in one form or another for over 50 years and recently taken delivery of a new 685 horsepower Super-Liner coupled to an mDrive transmission with the new HD option. Howard Shanks investigates.

Dean Slingo, is the managing director of Slingo Earthmoving, a family business he and his father Graeme formed in 2006.  Based at Castlemaine in the center of the goldfields region of Victoria where requests for their services is always in high demand.

The father and son team spent many years working alongside each other for another civil construction organisation, that father Graeme and his wife Helen had been partners in for over four decades. But a little over a decade ago Dean and his father decided to diversify forming Slingo Earthmoving, and the two co-directors have been doing long days ever since, with little sign of slowing down.

“Dad’s 72 now and we can’t get him to slow down,” Dean said. “Everyone keeps asking “when is he going to retire?” but he enjoys working and retirement doesn’t seem to interest him at the moment!” 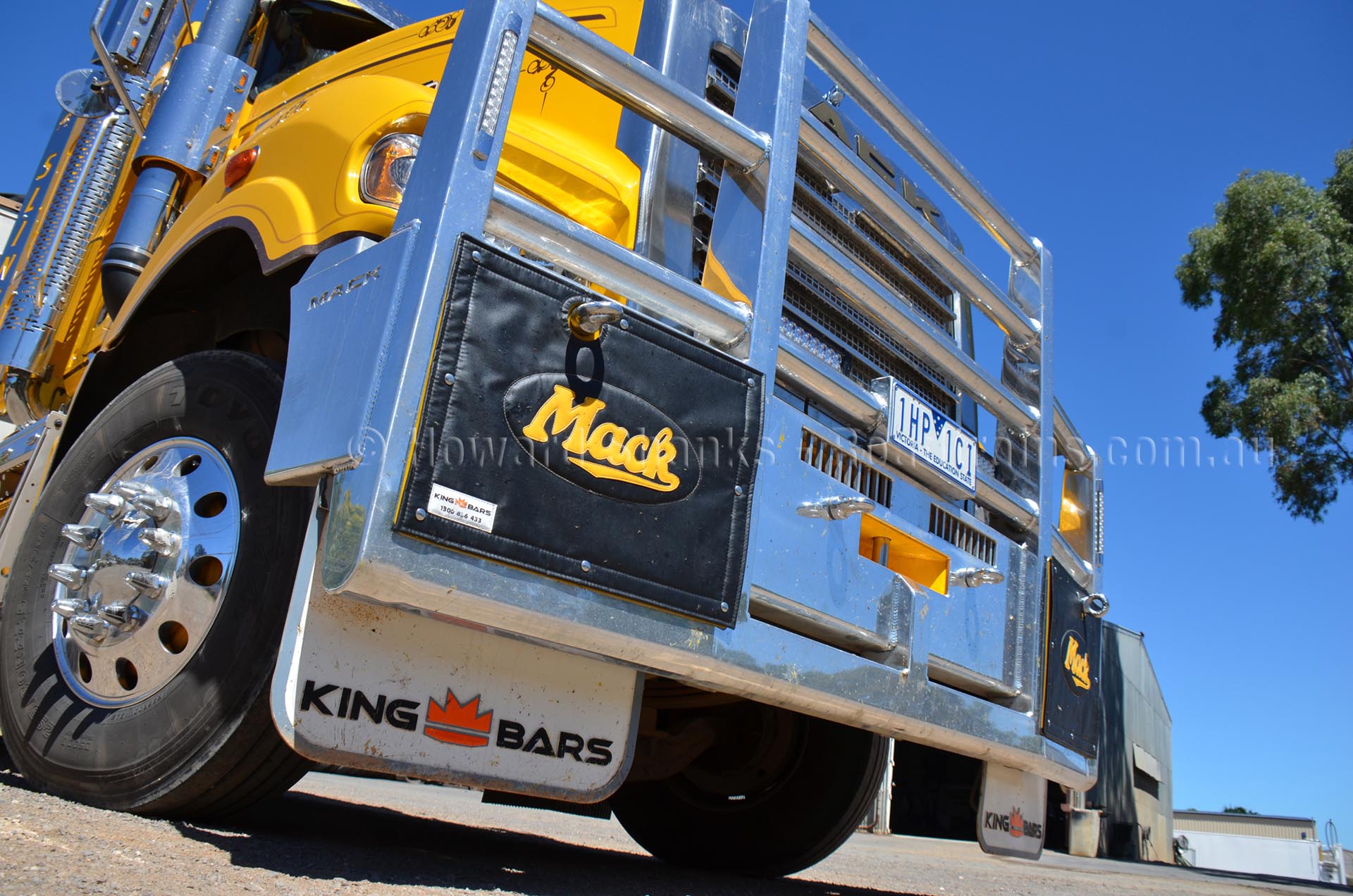 “We’ve had Mack trucks ever since I can remember,” Dean recalled. “Some of those early R-models had great heavy steel bullbars that weighed close to a ton and you needed two blokes to lift them up. This new Warrego bullbar we have on our new Super-Liner is a quarter of the weight of those old steel bars yet twice as strong. To date its collects a kangaroo two or three times a week and there is not a mark on it.”

“Recently I’ve been getting requests to go further afield,” Dean explained, “With the longer distances the smaller day cab’s aren’t really practical, so the Super-Liner has expanded our area of operations significantly.”

“Its prime role in our operation is to haul our low loader, transporting our machinery to the various job sites,” Dean explained. “That’s why I specked it up with the 685 horsepower MP10 and specified the mDrive with the HD shift option. When you throw a 35 tonne excavator on the low loader it needs plenty of power to climb the hills around here.” 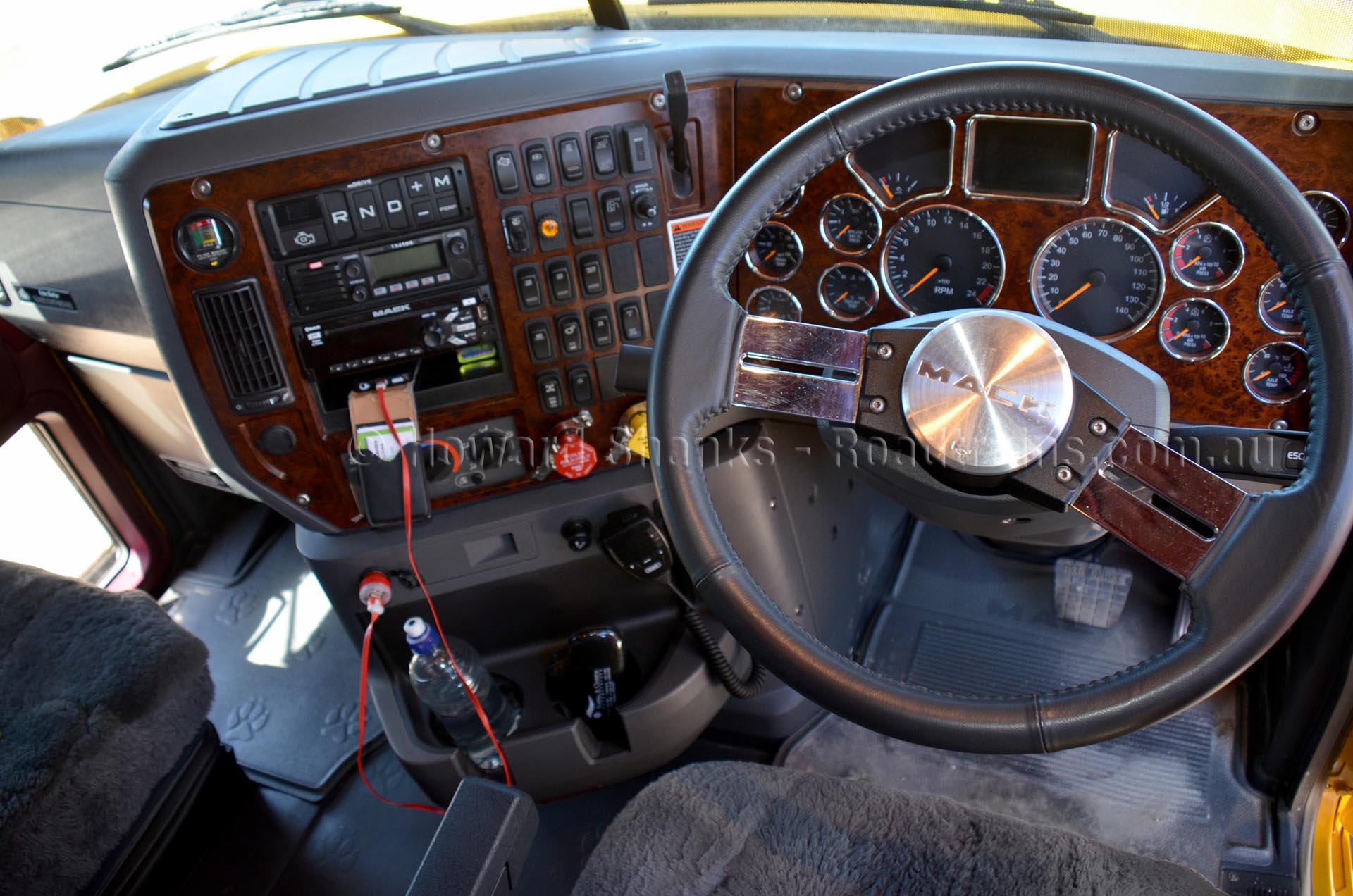 The MP10 under the hood is an in-line six displacing 16.1 litres, and is specked with a stump bustin’ 685 hp (515 kW) and 2300 lb ft (3150 Nm). It uses an SCR (selective catalytic reduction) emissions control system and because of its prodigious torque output, the 685 rating is only available with Mack’s mDrive 12-speed automated transmission.

The Super-Liner boasts a radiator with a sprawling frontal area of more than 1750 square inches, designed to cope with the high cooling requirements of heavy haulage and road train operations.

Also on cooling, the MP10 uses an electronically actuated Behr viscous fan clutch which apart from being almost totally unnoticeable in operation, works according to actual need by delivering anywhere from five to 95 percent of fan engagement. Put simply, rather than being either fully on or fully off, the fan responds with incremental engagement dependent on the amount of cooling assistance required.

Here’s an engine, for example, which at the 685 setting produces peak power from 1550 to 1800 rpm and maximum torque from 1000 to 1550 rpm, married to a transmission programmed to let the engine pull down deep into the rev range before downshifting, while at the other end of the scale, upshifting surprisingly early to maximise the engine’s phenomenal pulling power. Yet none of these traits do anything to harm fuel efficiency.

The MP10 also boasts a surprisingly effective ‘PowerLeash’ engine retarder, dispensing up to 570 hp (425 kW) of engine braking effect at 2200 rpm. Mind you, it’s not in the same class as the engine brake performance of a 15 litre Cummins but by manually shifting down a gear or two to keep revs up, it’s an engine brake capable of delivering effective retardation even at weights beyond 70 tonnes.

Mack engineers had spent several years developing and testing a toughened version of the mDrive before releasing the HD option for on/off-road duty. Back at the launch they explained that the HD option has tougher gears and synchronizers than the on-highway mDrive that came out in 2010 (which more than half of all customers for road-going Macks now choose). The HD also has a more effective oil cooler and uses higher-viscosity synthetic lube oil. The 12-speed mDrive HD is rated for up to 2,060 lb-ft.

Weight and price are usually important key factors in heavy trucks purchase decision process and the mDrive is among the lightest transmissions on the market. A single-countershaft mDrive weighs about the same as a comparable Eaton 18-speed manual transmission with twin countershafts and far less than the heavy-duty triple-countershaft Mack manual.

Dean says that the mDrive always seemed to pick the proper gear no matter how fast or slow he drove, or whether he is on undulating or flat going.

“It just seams to get it right every time,” he adds. 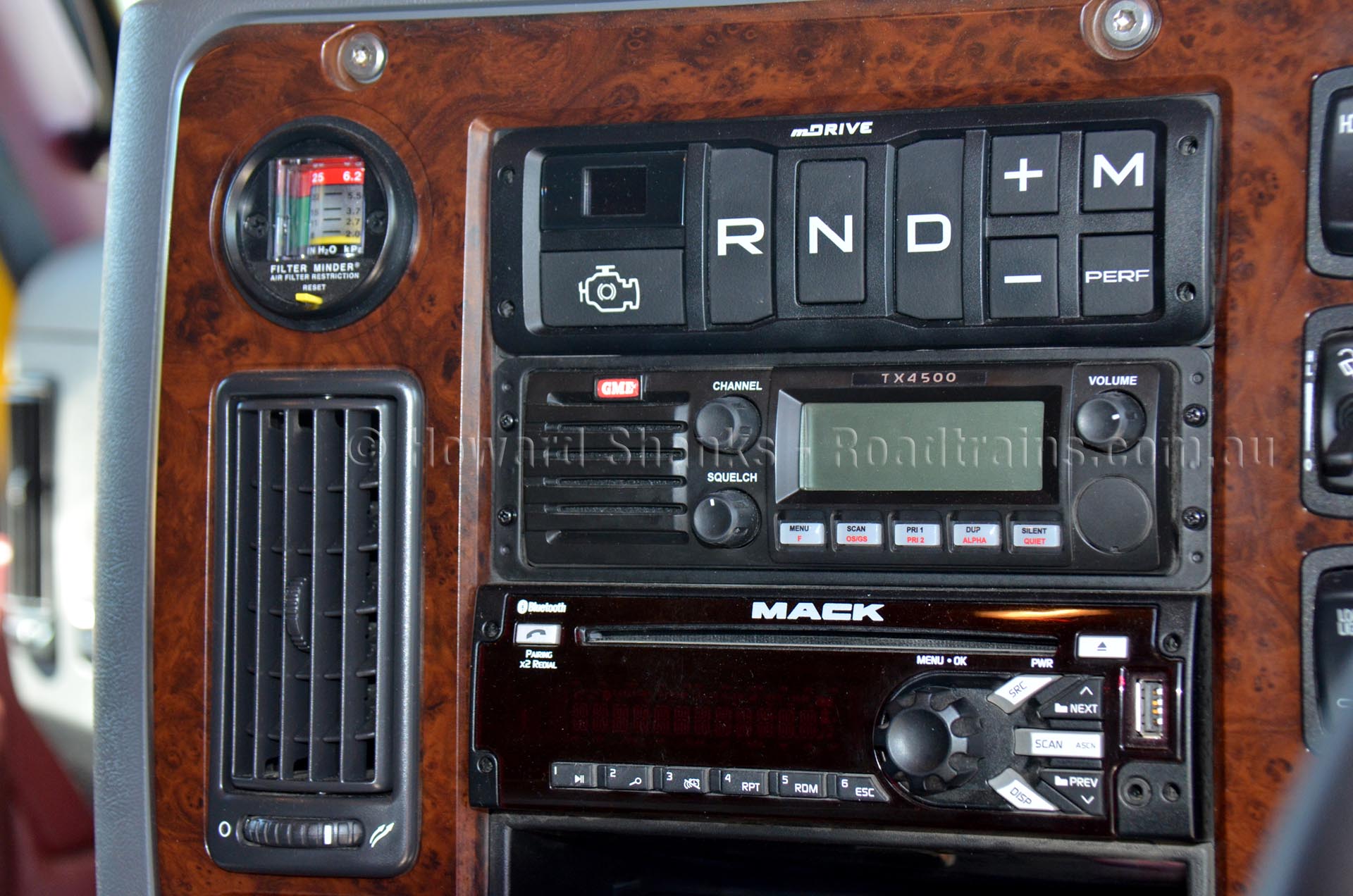 There are three operating modes – Easy Shift, Enhanced Construction and Heavy Haul – and this one of Slingo Earthmoving has the Heavy Haulage setting, so shift points are a little higher on the tachometer than the Easy Shift. The settings can be programed by Technicians at Mack service department to suit customer needs.

There is the dash-mounted selector included a “Perf” (for performance) button, which delays upshifts and adds power and torque as engine revs rise, making a truck noticeably livelier during acceleration.

Dean explained that it was especially effective as the transmission reached higher gears and road speed climbed. Punching the “Perf” button again returns the transmission to an economy mode. He adds that both he and his drivers like this feature.

“One of our driver’s who has been with us for the past decade said, “I’d sooner have one with a gear stick” when the first mDrive Trident arrived,” Dean explained, However I persuaded him to have a go and, needless to say, I reckon you won’t get him out of it now.

Look it’s a cracking gearbox and we’ve never had a single problem with it. I really like the Heavy Duty setting that changes gears at higher revs, that’s perfect when you’ve got a big load on. I’m really looking forward to the 14-speed version with the creeper gears, we could certainly use that.” 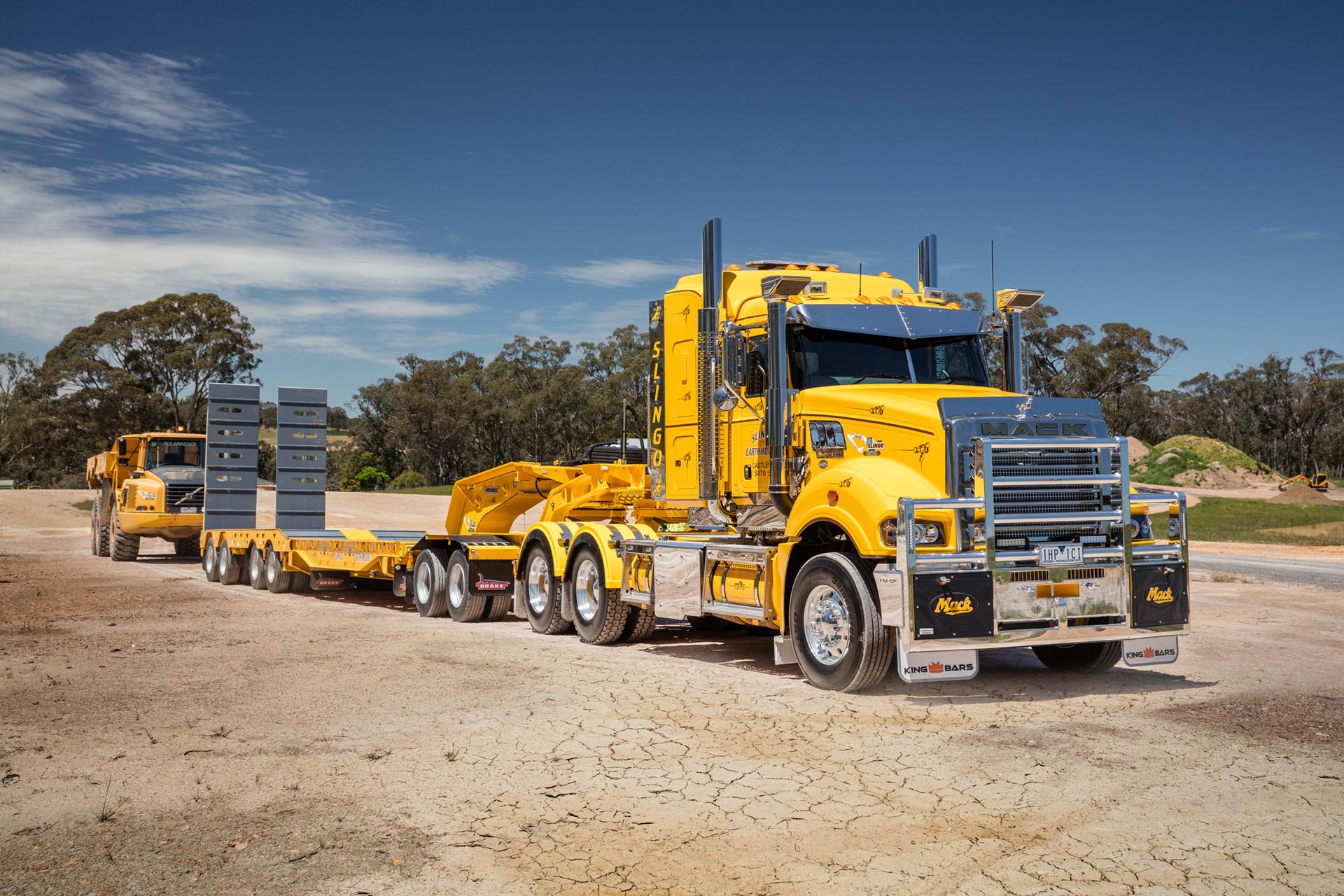 Dean tried the new gearbox on a recent tour of the Mack production facility at Allentown in the USA. He was very impressed with what he saw on the tour.

“They’re working on engines there that will be in production three to four years from now,” he explained. “That instills a lot of confidence that Mack are looking ahead.”

Dean and his father have been buying trucks from CMV Laverton since they started their business, and have since built up a solid relationship with their dealer Darren Aitken.

“Darren knows what we want in a truck,” Dean revealed. “Take this Super-Liner for instance, I didn’t really specify it in that much detail, other than to request some stainless to match the highly polished King bullbar, but when it arrived it’s got chrome everywhere, lights in all sorts of places and the company name in a stainless steel plate on the back of the sleeper framed by a couple of bulldogs. That was all Darren’s idea, and I absolutely love it. Our local sign writer Phil Duus has complemented it with the neat line and scroll work, which takes a steady and experienced hand.”

“But all the bling aside, I’ve been more than impressed with the HD setting on the mDrive and the overall economy from the MP10 engine,” Dean concluded. 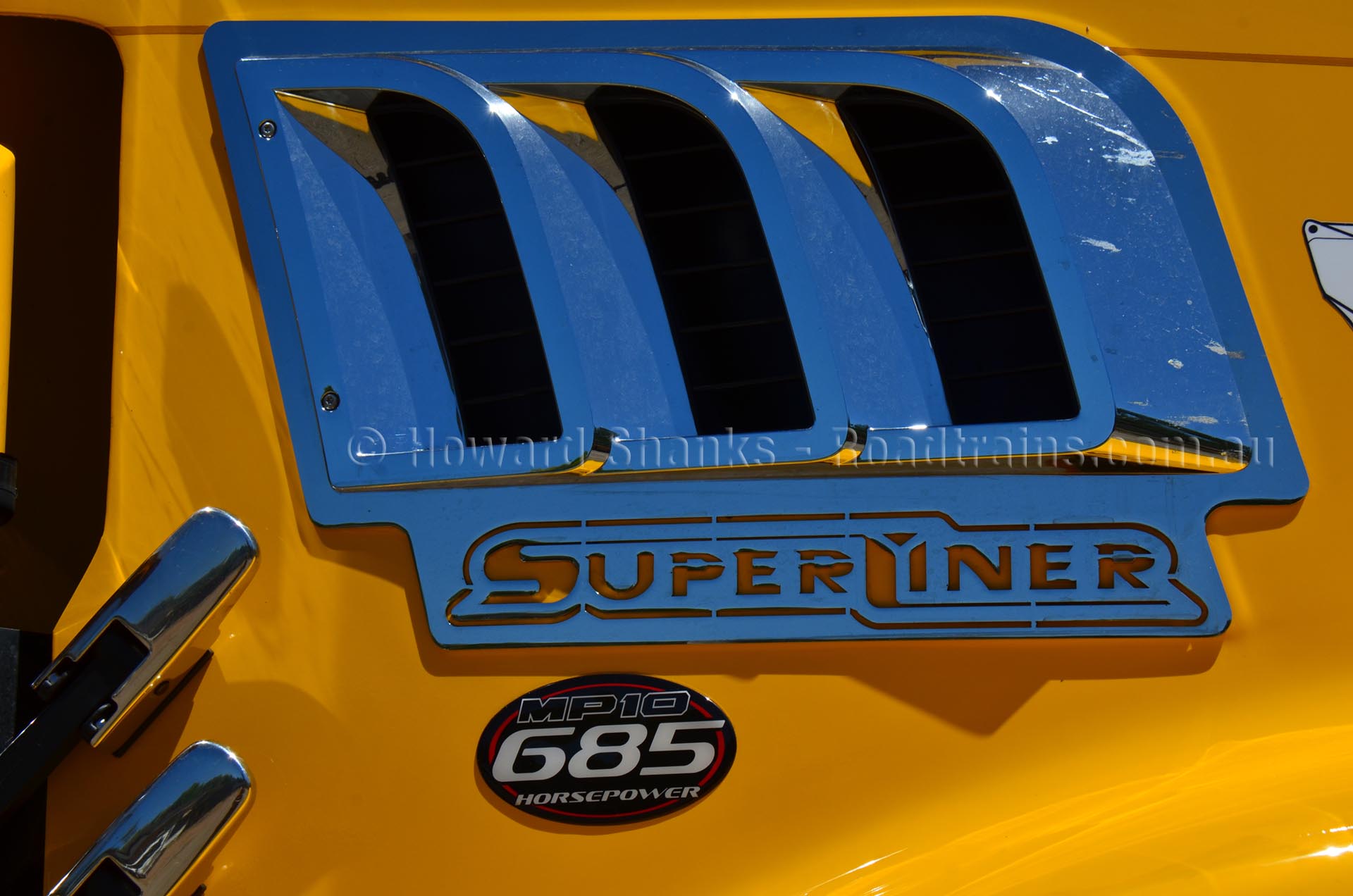