Salaries for FIFO road train drivers are usually well into the six- figures and don’t require tertiary qualifications. Hence, it’s no surprise there is a long list of workers signing up to get behind the wheel of a road train and earn big money. But there’s another side to this job that the rest of country doesn’t see. That is the loneliness that comes with leaving your family and friends behind. 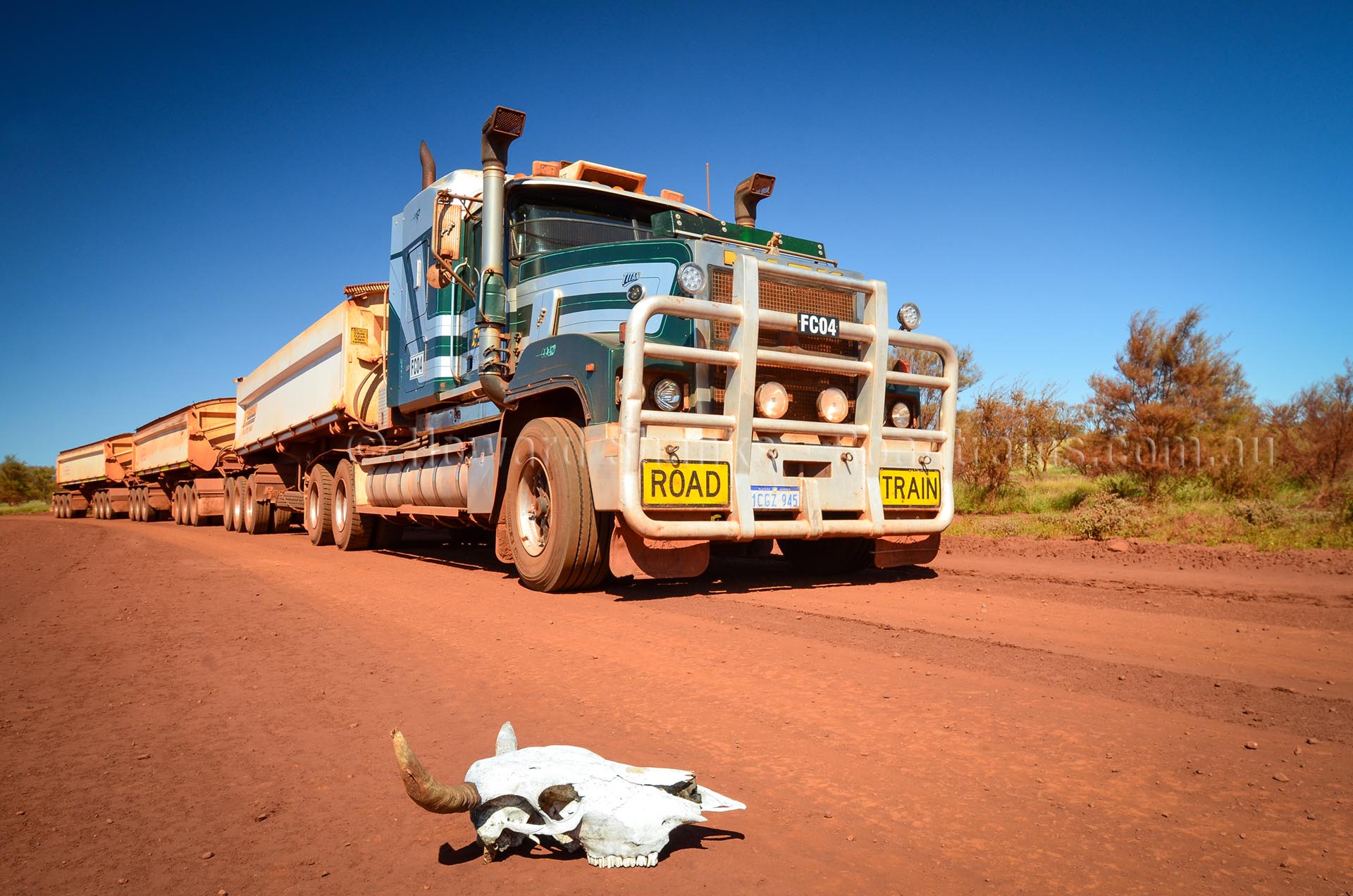 For the past decade, every three weeks my mate Richo climbs aboard the Monday morning flight out of Brisbane bound for Port Hedland on the other side of the country to commence his FIFO swing.

Richo finds the culture of the work camps varies from place to place. While he’s found some to be warm and friendly, others are definitely less so. They’re usually isolated affairs with most activity taking place within the compound. Thankfully the camp he’s currently at is not far from the Port Hedland township, which has decent facilities, although, like most mining towns, everything is expensive.

The rooms themselves are compact, comprising not much more than a bed, a desk and a small fridge, rarely offering much more space than a prison cell. If you’re lucky enough, you might score one that extends to an ensuite bathroom and a TV.

So, if you can tolerate the loneliness, cramped living quarters and long work hours, then you might have a chance of making it a FIFO road train driver. Nevertheless, when our mate Richo offered our roving technical editor, an opportunity join him for a FIFO swing and the possibility to drive a CAT powered Mack Titan he jumped at the chance. 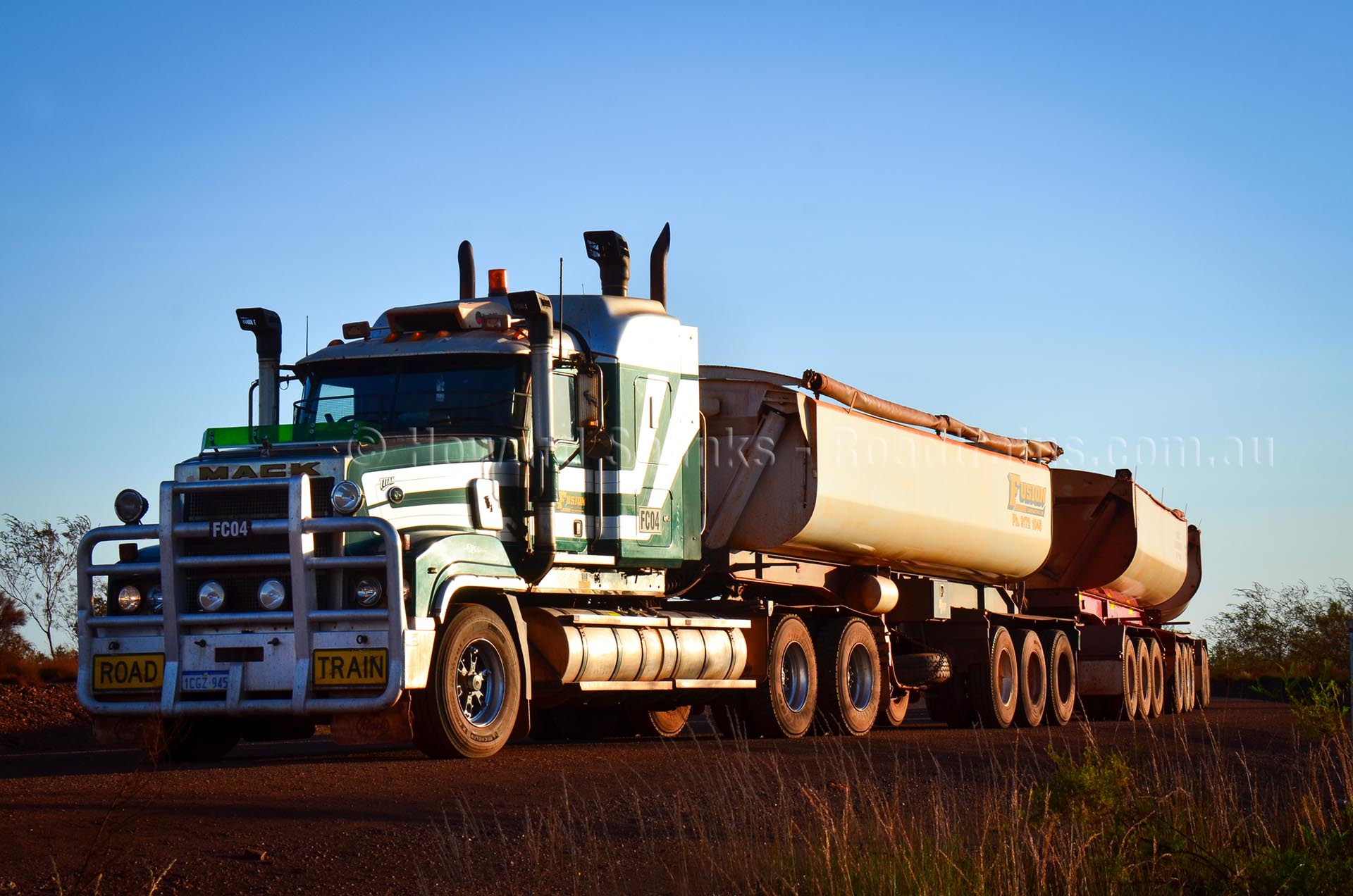 Park up in the lineup at Iron Valley mine site (The additional air intake at the rear of the bunk forces cool air through the transmission oil cooler).

In 2005 this Mack Titan was one of the giant brutes in the road train market. Specked with a CAT C16, triple countershaft Mack 18-speed and big RT52-185G Meritor axles it was destined for hard work.

Since leaving Mack’s Brisbane HQ a decade and a half ago, this Mack Titan has called the Pilbara region of Western Australia home. Life for this Titan along the hot arid WA desert tracks has certainly not been a leisurely cruise, rarely did it spend time on paved bitumen roads.

It was a little after midday when we touched down in Port Hedland; I took my phone off flight mode as the plane taxied towards the terminal and it pinged as I’d expected, signalling a waiting message.

“Meet you in the car park” it read.

Half an hour later, the dust-covered 4×4 was heading towards the port, “I’ll drop you off at Port office so you can get your Port Pass, then if we’re lucky you’ll make the afternoon mine induction session,” my mate Richo said.

“I’ve got you a room on-site in one of the dongas,” he added.

Thankfully I’d made the afternoon induction; this meant the sun was slowly slipping down over the Indian Ocean by the time we arrived yard in Wedgefield. “I’ll show you to your room,” Richo said as he grabbed my suitcase from the back of the ute. “Get yourself settled then we’ll go and find some trailers for you.” 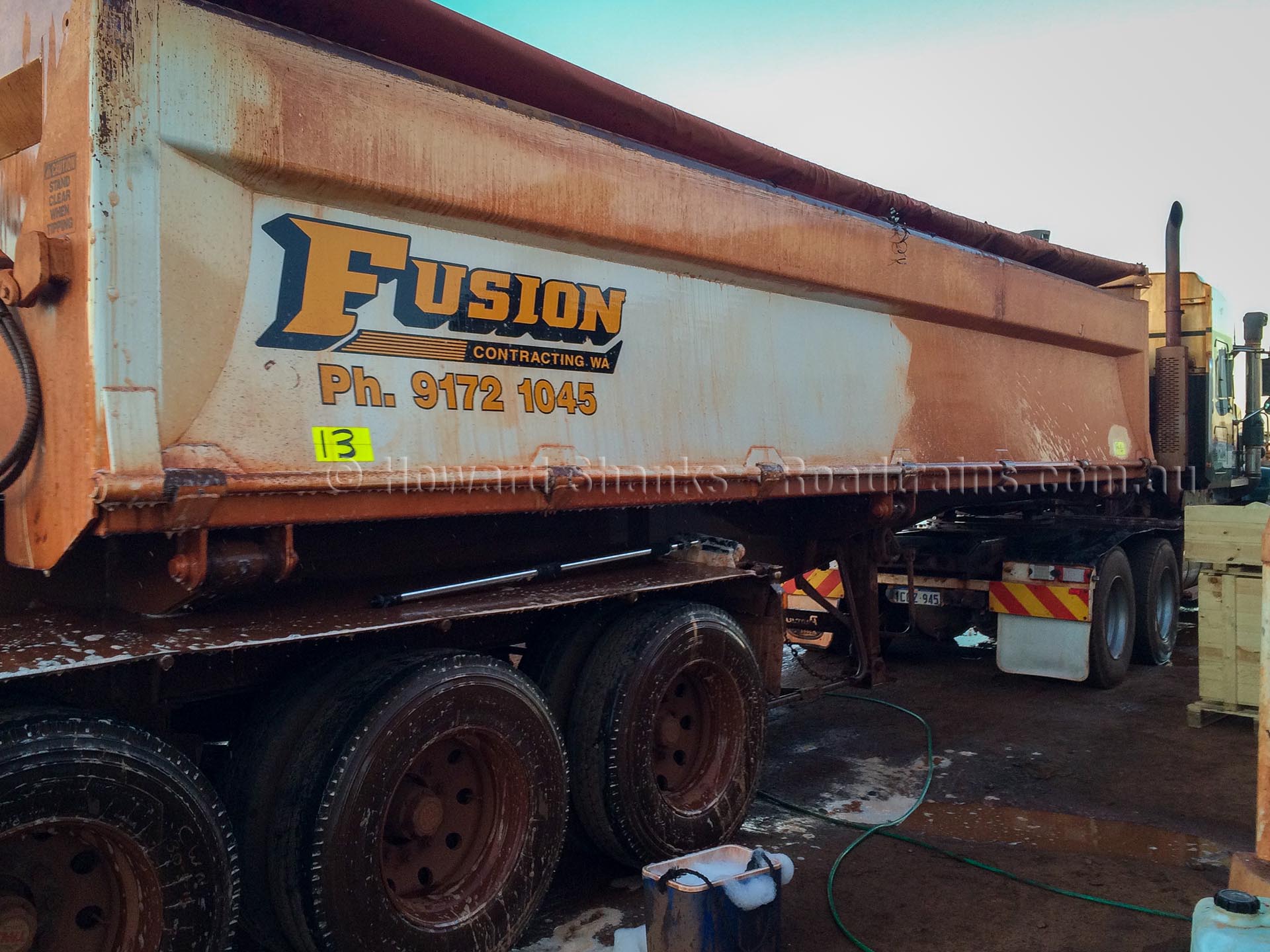 Washing layers of Pilbara dirt of the trailers.

The old Titan was parked down the back of the yard, covered in a thick layer of red Pilbara dust. “No one’s been in it for over a month,” Richo said as we emptied the contents of both toolboxes. Probably pay to make up your own breakdown box,” he added, “see Rob in the workshop he’ll help you with whatever you need.”

An hour later I’d managed to put together a comprehensive break down box which consisted of a few spare air fittings, cable ties, hose clamps and other knick-knacks that might be handy out in the bush. Rob wandered up with a wide-load sign and new set of triangles. I’d even managed to score a working jack to replace the aging one that had discharged that much oil in the toolbox, it resembled the slick left by the Exxon Valdez. The restocking of locker box was coming together nicely when Richo arrived back, “That will do for tonight,” he said, “We’ll get an early start in the morning”. 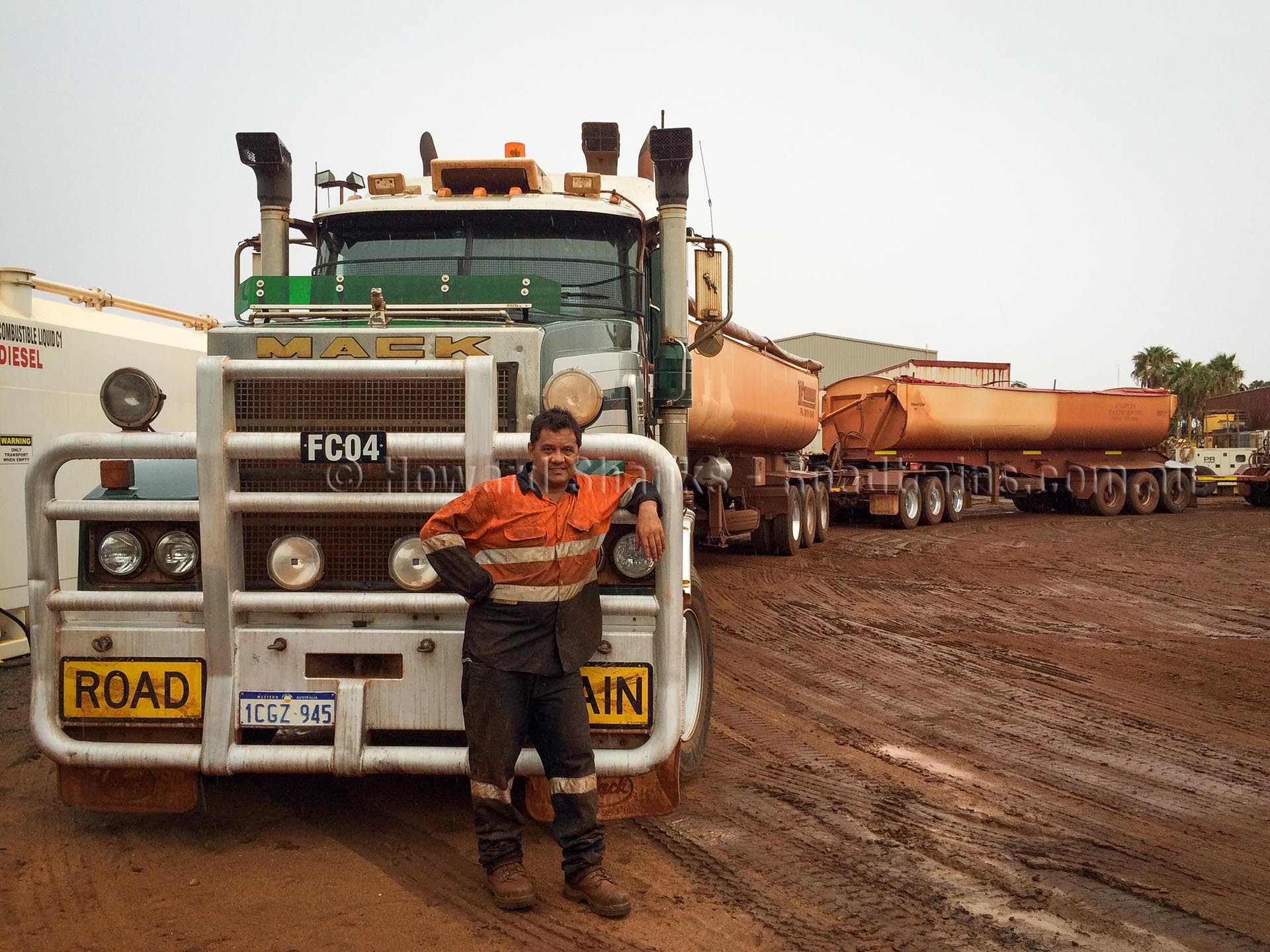 Our roving editor half way through the truck wash.

Early the next morning, after a thorough pre-start, I greased the turntable and headed to the trailer park to find a set of side tippers. Up here in the Pilbara, spare trucks like the old Mack Titan see little TLC, the entire combination needed a decent scrub.

It was one of those thoughts that seemed like a good idea at the time, but three hours into the wash, the novelty of a clean truck was wearing thin. Nevertheless, by late afternoon the old Titan and its trailers looked a hell-of-a-lot cleaner.

I pulled the Titan around to the fuel bowser and started filling the two front tanks. The run to the mine site at Iron Valley takes roughly 12-hours, and the truck will consume approximately 650 litres of diesel, needless to say, 1000 litres in the two front tanks would be ample for this shift. With the truck all set to go to work again, it was time to get out of the wet clothes and have an early night. 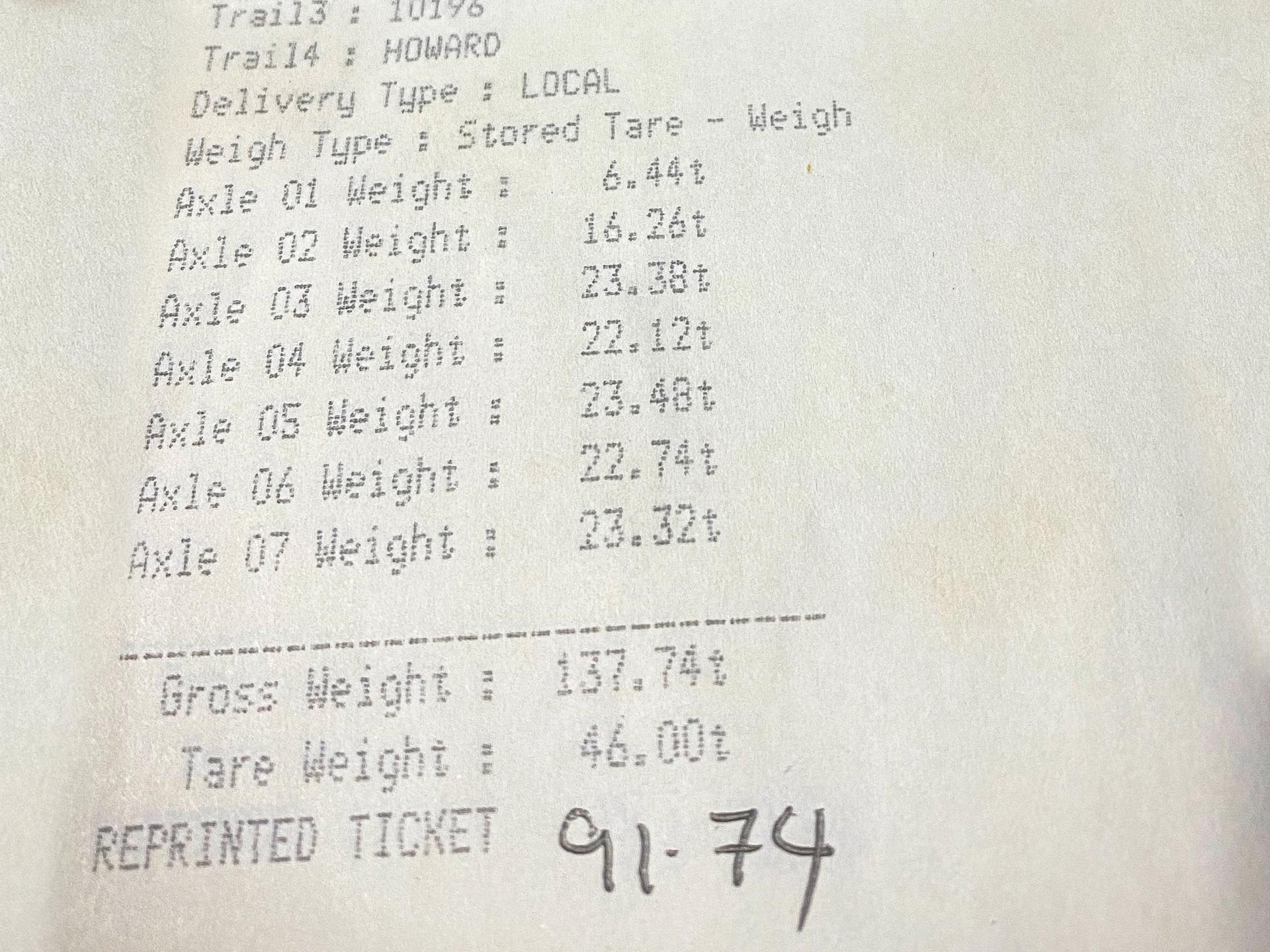 The all important weigh docket.

Over the past few months, the price of iron ore has steadily risen to a nine-year high $US137 per tonne (at the time of writing), which means miners are keen to shift more tonnes of ore per month. Consequently, transport companies are dragging their older units like this Mack Titan out of retirement, to help fill the quota. Subsequently, this is driving the price of used units higher.

Right on 2 am the alarm on my phone broke the silence, half an hour later I turned the key, and the big yellow CAT under the hood leapt into life. While the air pressure built up, I wandered around the road train, tapping the tyres and checking the lights. Back in the cabin, with the paperwork completed, it was finally time to get rolling.

When it comes to performance big bore C16 engines are in a class of their own. They deliver raw power that a driver can feel through the seat of his pants. However, they do enjoy more than their fair share of diesel, especially if you’re heavy on the throttle.

It certainly felt good, squeezing down on the throttle and listening to the 16-litre bark as it hauled the empty triple southbound towards the mine site. The mine site has imposed a 90kph speed limit. Once out of the town limits, I set the cruise control on 90 and slipped the first CD of an 8-CD audiobook in the CD player.

The Mack T2000 transmission is a constant mesh triple countershaft box. The shift pattern is similar to an 18-Speed Roadranger. However, it requires a slightly slower shift movement between gears if you want to make slick, clean changes.

Inside the cabin, the ride is considerably smooth for a truck of this age although given that it has travelled over one and half million kilometres it was relatively quiet with the odd rattle and squeak every now and then.

The sun was scarcely peering over the horizon as I pulled up at the mine site. Thankfully there were only two trucks ahead of me, so I’d not be waiting too long.

The night before Richo passed me a piece of paper with the weights to call the loader operator. And the measurements of where to stop on the weighbridge for each axle group. I’d borrowed a whiteboard marker from the office lady and wrote them on the windscreen. That would make the job a little simpler at the mine site. 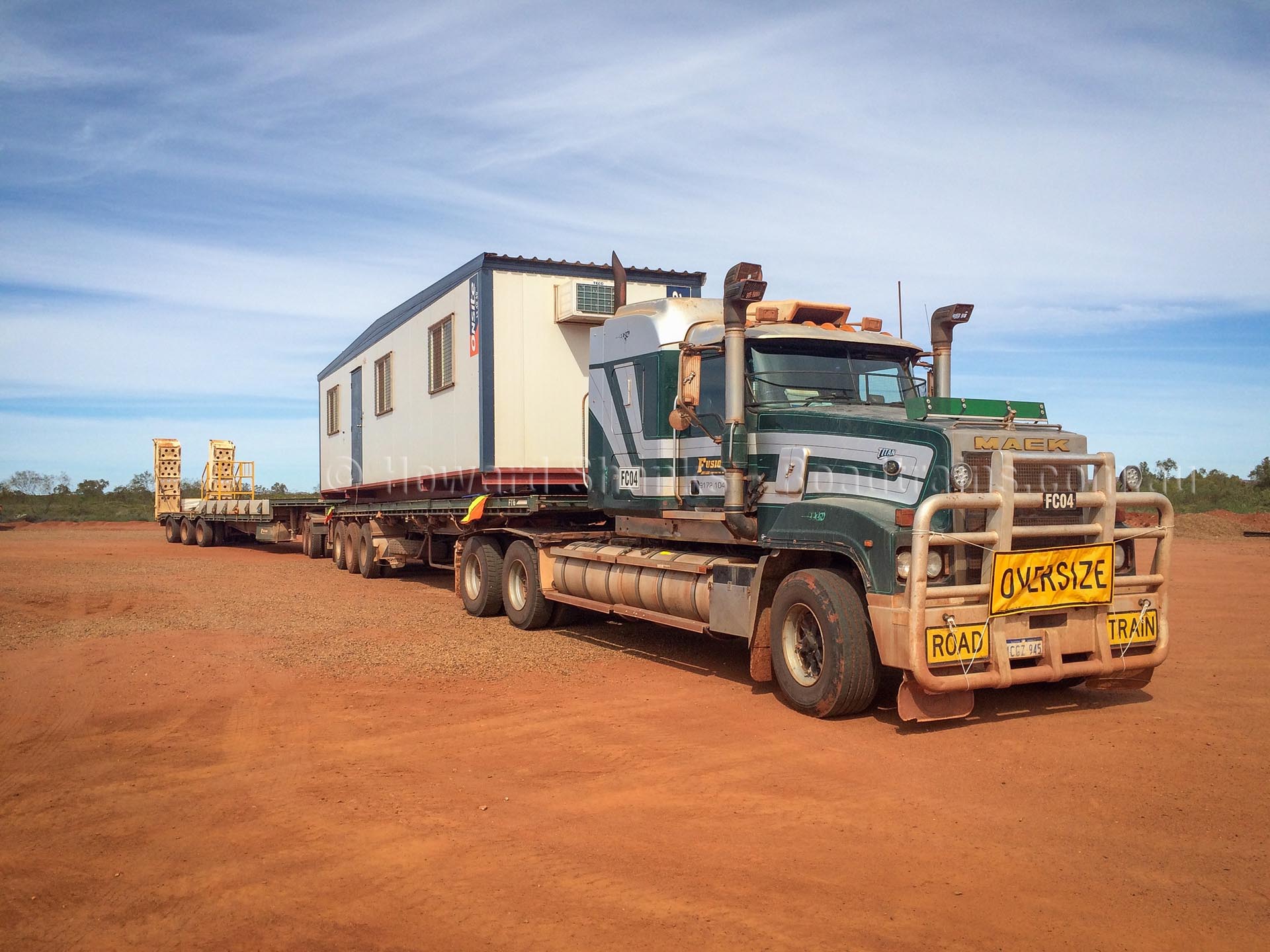 The Hardlite trailers and dollies are from local West Australian bodybuilder Roadwest Transport. A few of the major factors why these trailers are popular in the Pilbara region for the bulk commodities applications like iron ore haulage is their light tare weight, their ability to tip cleanly and spare parts availability.

Back in the heyday of trucking when Cat engines were kings of the highway, there was nothing better than commanding a C16 hauling a big load. You could let them lug right down low in the RPM then shift back a full gear, rather than short shift with split gear shifts. When these big bore Cat engines were working hard, you could all but hear their heartbeat like they were alive.

At the dust down area on the outskirts of the mine site’s haul road, I gently squeezed down on the throttle. The tenacious yellow C16 responded willingly and bit down hard on the long grade up to the first railway crossing. I kept a watchful eye on the pyrometer because, on a long gradual pull, this tenacious Cat engine’s appetite for hard work can drive the pyro temperature right up into the red zone in a flash.

Surprising there is no vibration from the driveline, it all runs very smoothly for a truck of this age. A testament to the maintenance schedule that Rob and his team in the workshop use. 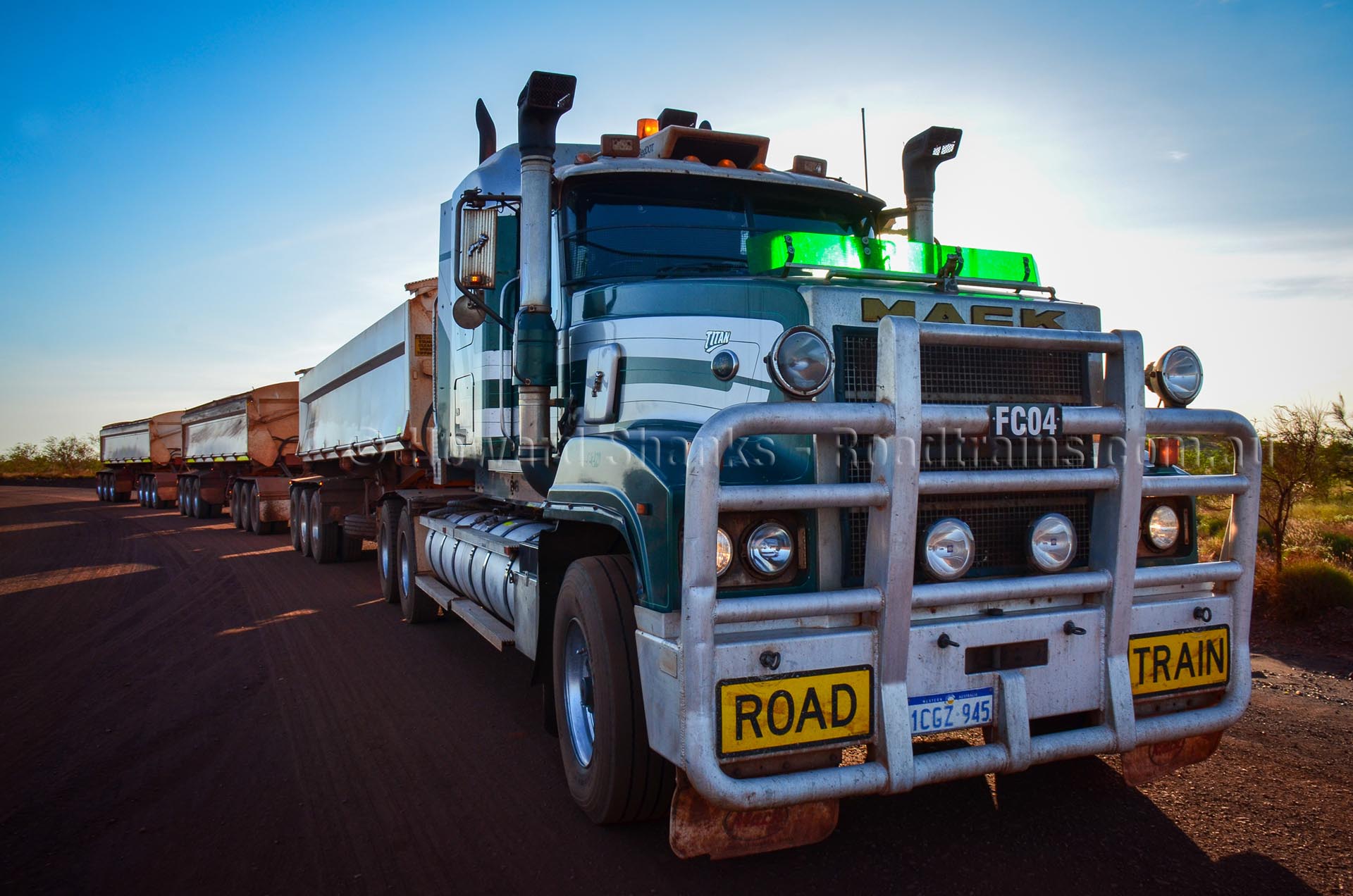 Parked up in the lineup at Iron Vally mine site.

Although the driving style is more relaxed when handling a truck like this. It is still vital to remain very alert at all times. There is no getting away from the fact that with three trailers and a gross combination mass of 137 tonnes travelling at highway speed is a constant risk – driver vigilance is paramount.

It was around midday when I guided the Titan around Finucane Island to tip my 92 tonnes of iron ore into the hopper. Half an hour later I pulled the Titan up next to the fuel bowser. Surprisingly I’d only used 596 litres of diesel on my first run.

Richo wandered over and enquired how I’d gone on my first run. “You remembered the way then,” he smiled. “Next week you can do a few runs in that 6900 with a quad if you want to test another truck.”

At the time of writing you’d expect to pay between $65K – $120K for a 2005 Mack Titan, with well over one million kilometres on the clock.

While you might spot a bargain for as little as $55K including the GST, be aware that it will an extremely well-used unit, and it’s probably had a hard life. It certainly will require a considerable investment to make it reliable once more. 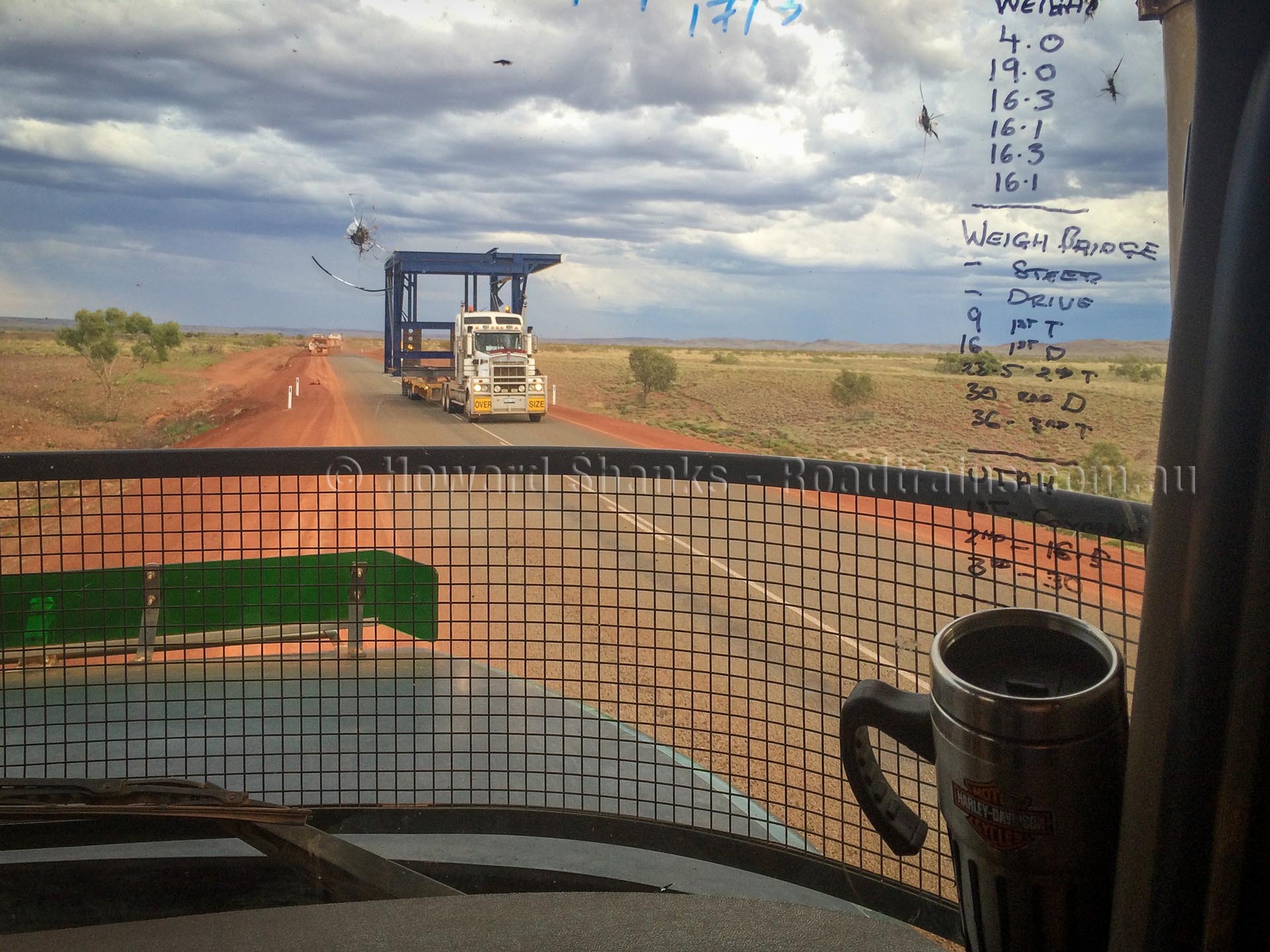 All the important data is written on the right hand side of the windscreen.