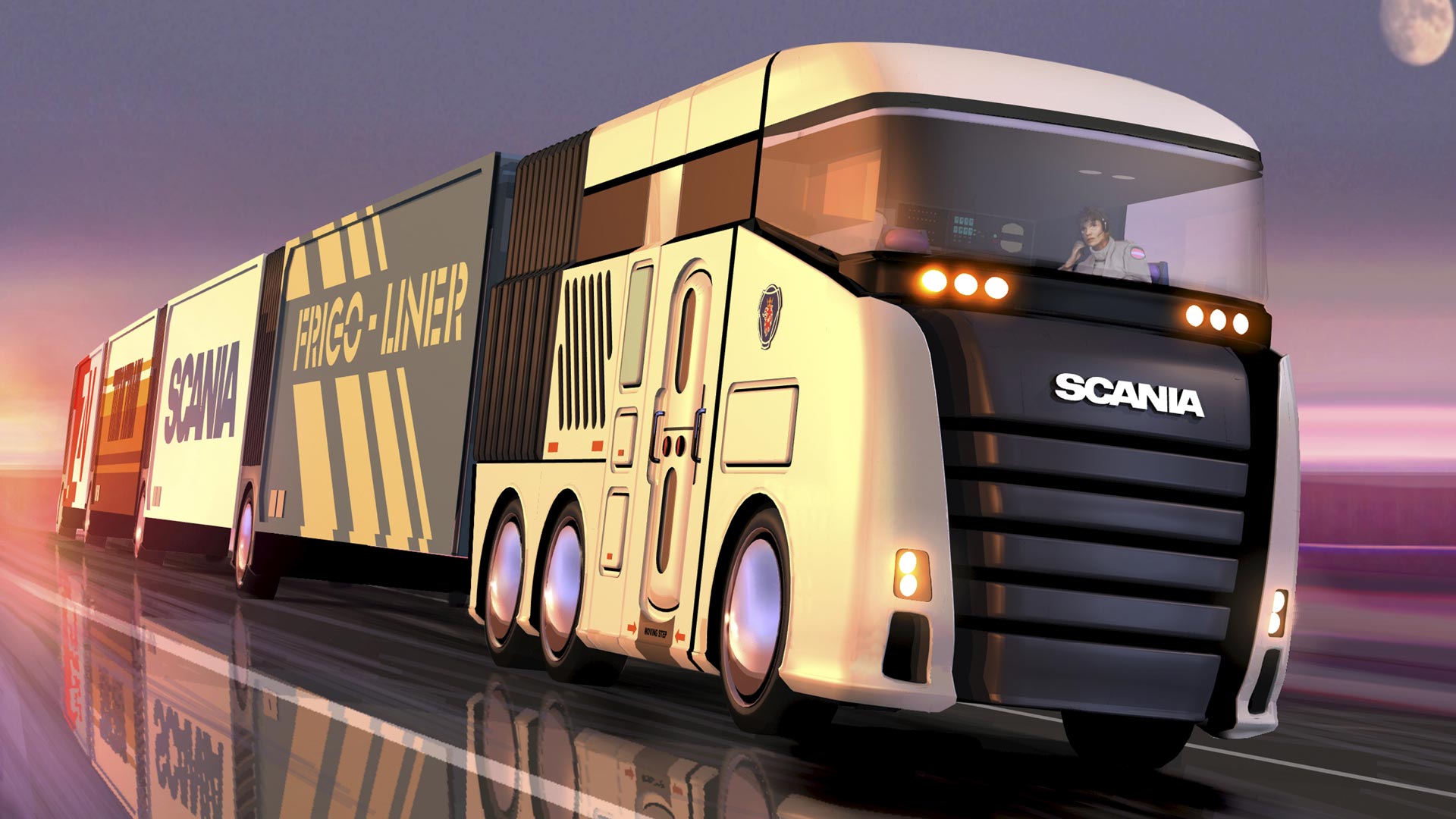 Certainly, the truck will still be with us in 2050. To some degree, externally, it will still resemble today’s truck, albeit somewhat more futuristic. But under the surface, in the futuristic satellite-monitored electric “Road Trains” crisscrossing our continent, very little will remain the way it is today. 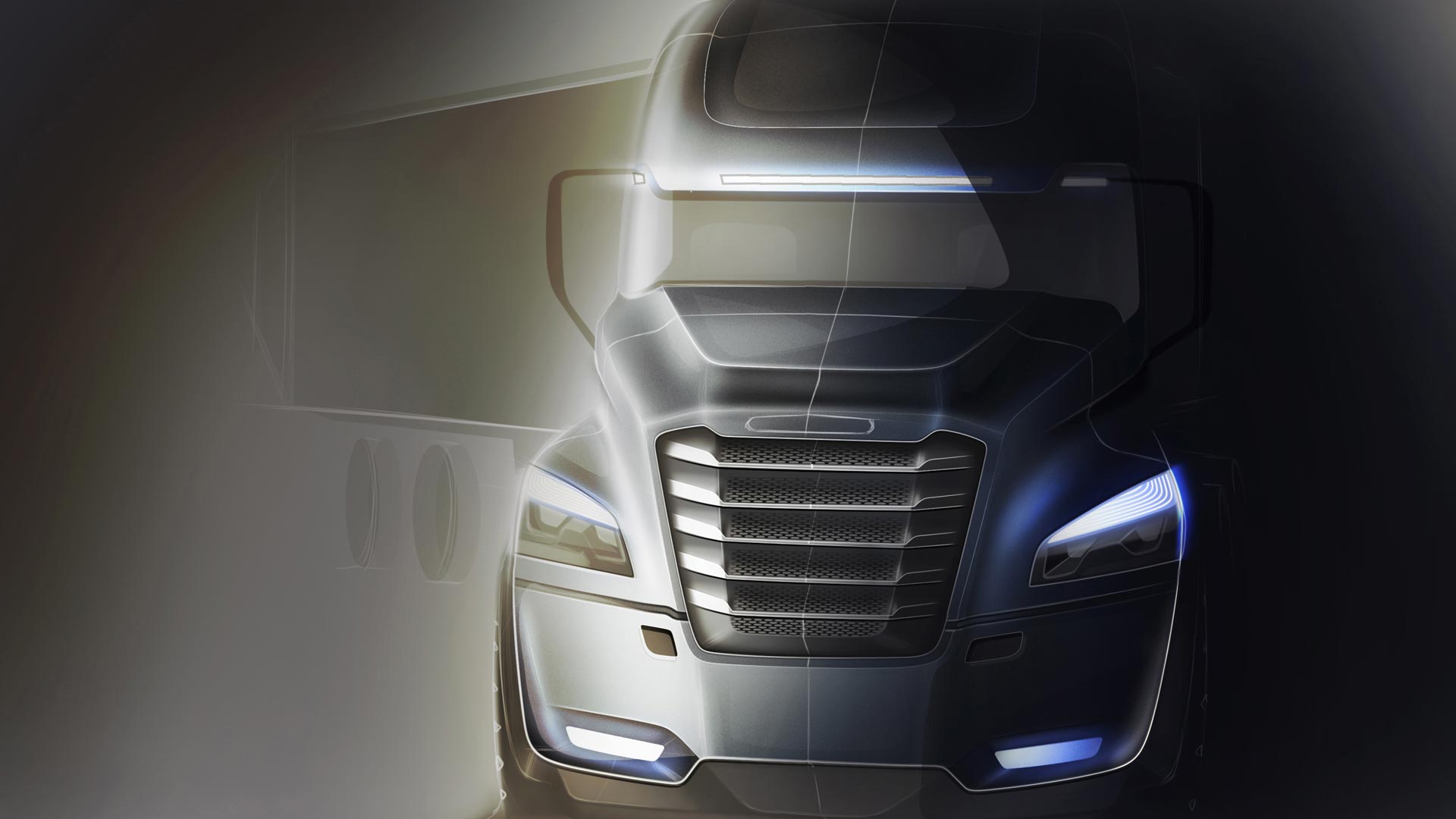 Nevertheless, a description of something so far in the future requires imagination and creativity as much as it does a thorough knowledge of the transport industry’s development and future technological advances. The following theories are imaginings from Daimler and Scania’s experts.

According to EU forecasts, in the next 15 years, the quantity of goods transported by road will increase by 50 per cent. Better logistics, helped by new information technology, will boost annual mileage and truck utilisation. Moreover, the number of vehicles on the strained European road network will continue to increase. As a result, experts predict that traffic flow will eventually grind to a halt in some areas unless some action is taken. Many experts agree that better use of the available road surface is the best solution. 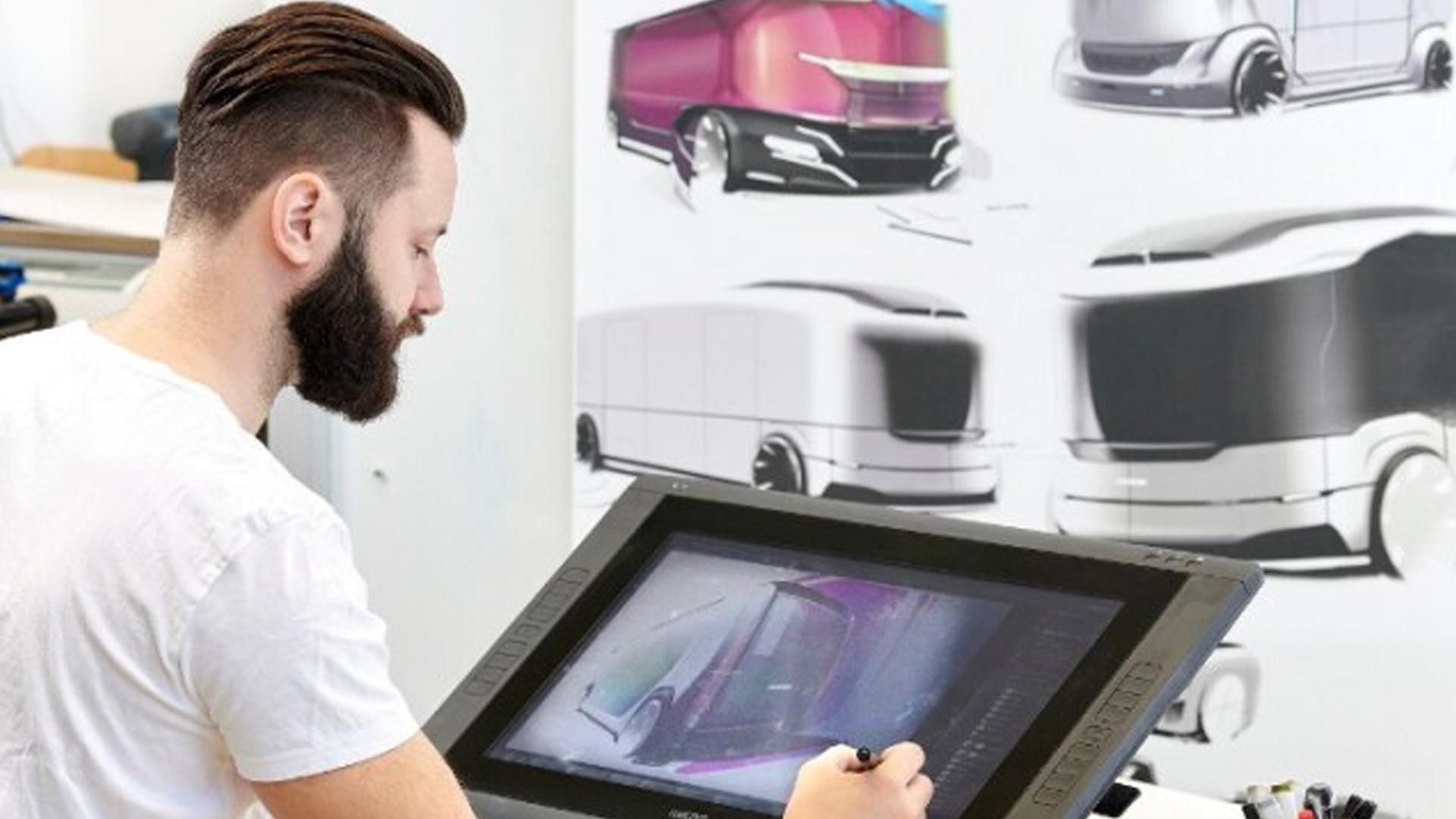 A revolution compared to the early 2020s is the fact that the various national road authorities need to agree on common international standards that permit larger vehicle combinations on the roads to reduce traffic congestion.

Intermodal concepts will finally take a giant leap forward. After many decades of reluctance, the air, railway, road and shipping will need to embrace more efficient multi-modal transport solutions, such as we are seeing with Scania’s NXT concept vehicle. The new proto type vehicle battery electric self-driving urban vehicle is designed with the flexibility to shift from ferrying commuters to and from work in mornings and evenings, delivering goods during the day then collecting refuse at night. 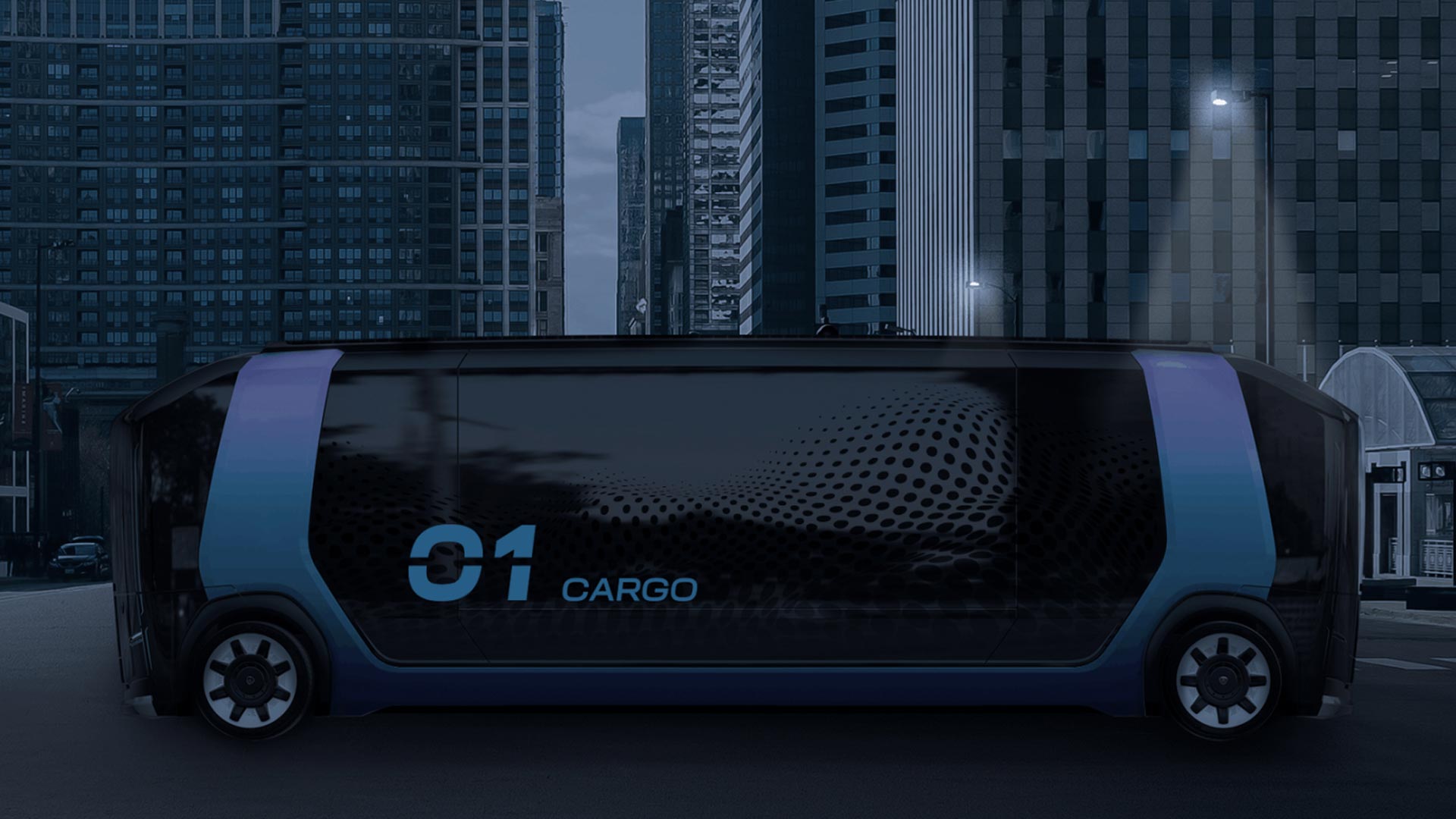 Thanks to the extensive separation of goods and passenger traffic, the overall efficiency of road infrastructure will steadily improve tremendously. Furthermore, the conflict between different categories of road users will become a thing of the past in the future. Some advancements are already starting to filter through now. For instance, the average speeds are now very close to a truck’s normal cruising speed. Here in Australia, this initiative took some heavy investments in the late 2000s and early 2010s, but it paid off immediately, not least in terms of a drop in fatalities.

Progress in tyre and road surfacing technology has reduced tyre noise to a whisper, despite the higher cruising speeds. Most of the ugly roadside noise barriers erected during the nineties are now being removed, allowing travellers to enjoy a more pleasant view again while moving rapidly through the landscape. 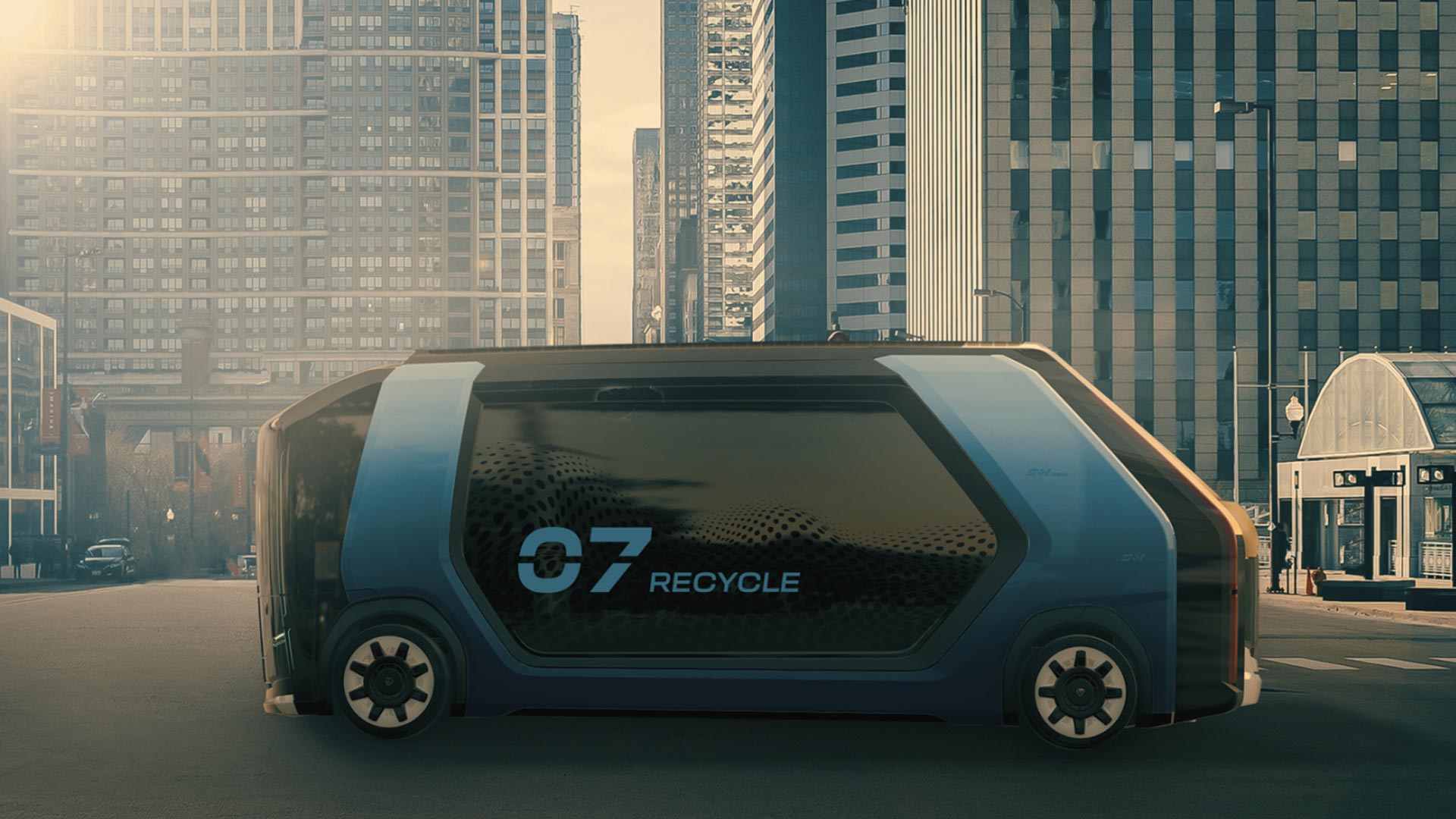 One popular method of rationalising transport currently being investigated is dual-mode trucks (DMT). In DMT, up to ten trucks are linked together – electronically, not mechanically – into long vehicle trains guided by autopilot, satellite, and leads in the road surface. Laser systems keep precise distances between the trucks and prevent them from running into each other or obstacles.

For example, it is envisaged these Road Trains will run long distances without drivers – between major distribution terminals in different countries. When the Road Trains arrive at the transport terminals, they get split up, and drivers take over and drive the individual trucks to their final destinations. 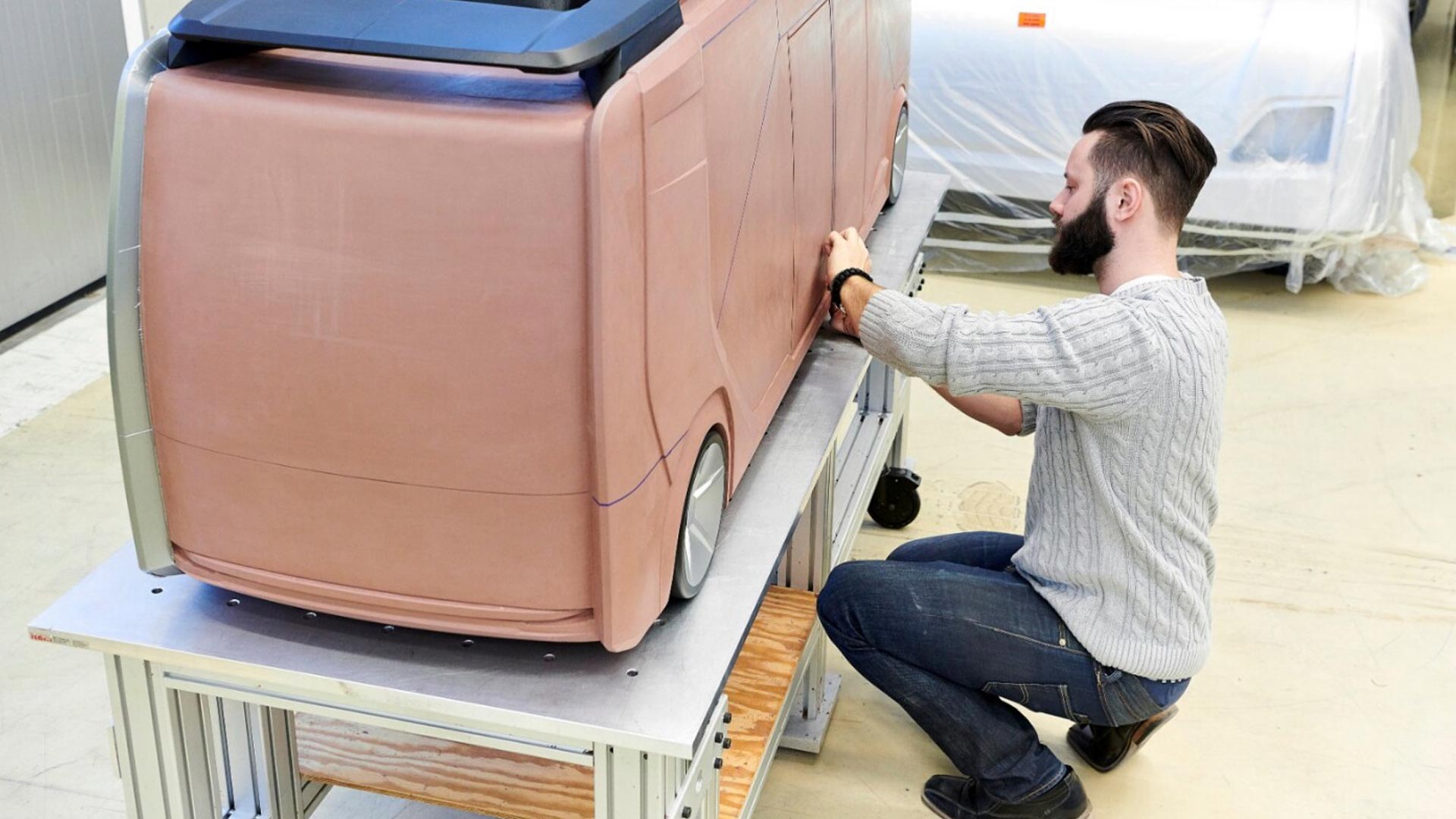 The DMT concept has several benefits that go beyond improved traffic flow. For example, fuel consumption is lower per tonne transported, and consequently, pollution is reduced. In addition, the number of accidents involving trucks will drop significantly – and we are seeing this technology now implemented in trucks from Mercedes-Benz and Scania which is already reducing road accidents thanks to advanced guidance systems.

The load-carrying components will also evolve. Yesterday’s pallets and containers in different sizes will get superseded with fully standardised equipment that permits smooth multi-mode transport via road, rail, air and water.

Experts estimate that by the mid-2050s, half of the earth’s oil reserves will be depleted, and the price of petrol and diesel will skyrocket. So instead of increasing, as was once the case, the annual production of fossil fuels will decrease.

Today we are seeing the introduction of fuel cells that complement diesel engines in trucks. Following a breakthrough in battery technology, we are now also seeing fully electric vehicles entering the market. Rapid progress in wireless electricity transmission via leads in the road surface seems to hold further potential for extended travel distances for electric vehicles. Some experts predict that eventually, it may become possible to eliminate the need for onboard batteries all together for propulsion.

The most common propulsion system on electric vehicles consists of small motors for each wheel. Since there is no need for a cooling system, the front design of futuristic vehicles minimises drag. Of course, the same applies to the rear, the sides, and the underside. As a result, future trucks will barely resemble what we used to call a truck in the old days.

Truck maintenance takes on a new meaning, at least in the most modern trucks. All components on long-haul rigs will be maintenance-free, and since all the vehicle’s systems are constantly satellite monitored, there is no need for regular check-ups.

Future maintenance gets scheduled automatically based on the condition and wear status of the truck’s individual systems. These are the only items attended to when the truck is called in for its occasional visit to the workshop. To increase uptime most services will take place overnight.

Experts believe that agreement between the automotive industry and authorities will see an end to annual pit inspections for such high-tech trucks. 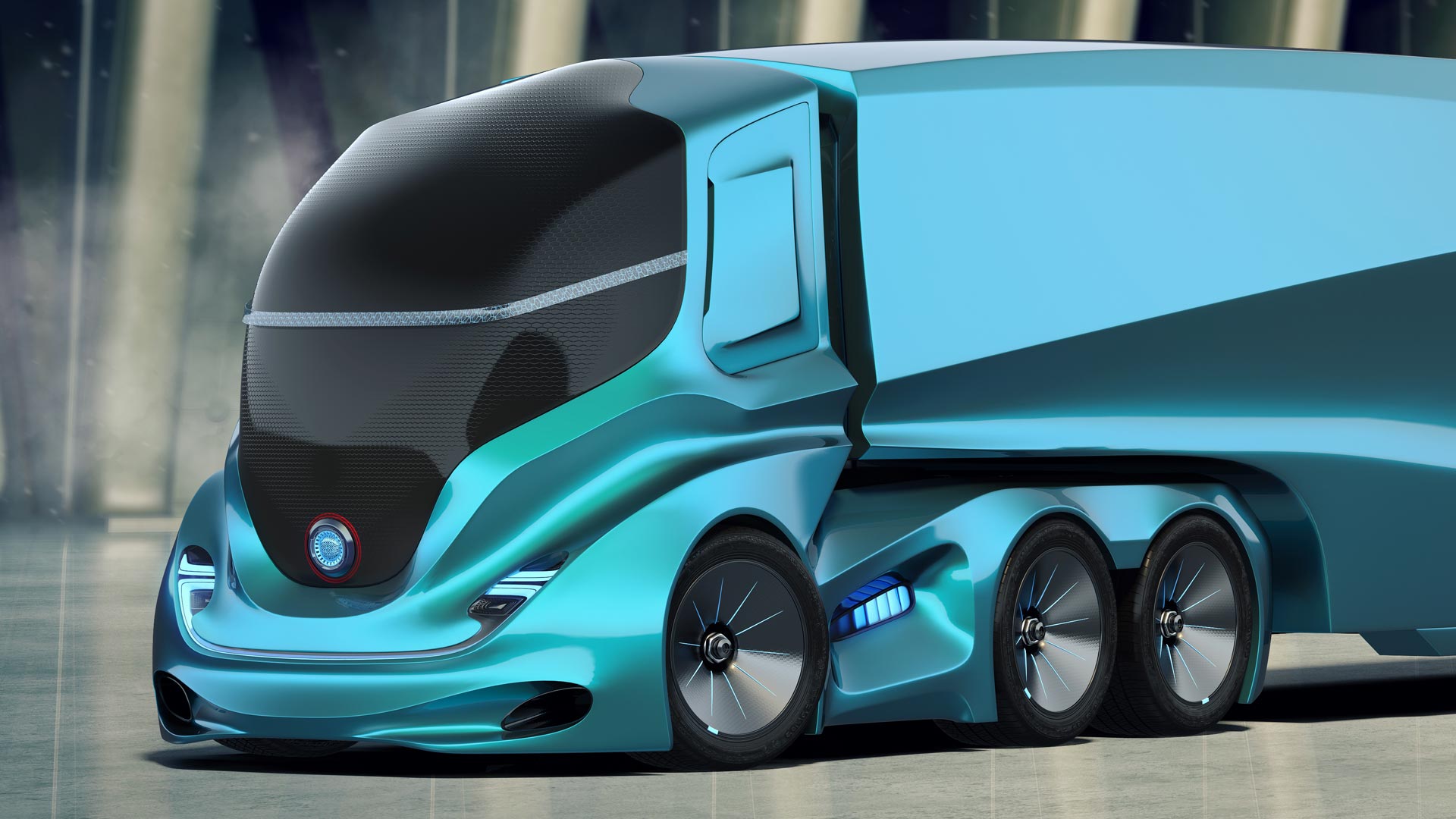 The biggest change in trucks can be related to information technology and electronics. For example, drive-by-wire, as pioneered on aircraft in the late 1900s, is now standard in steering and braking systems.

Besides improving road safety, information technology has also caused a giant leap in ergonomics and the driver environment. “Driving” a truck has acquired an entirely new meaning.

The task of driving a truck along endless highways is a fond memory of the past for older drivers. However, missed by some drivers, the trucker culture that started in the 1970s peaked in the late 2010s. The skills and ingenuity honed by self-made truck drivers is now a dying trade. Modern truck drivers are just that, “drivers” no longer do they need to change tyres or maintain their own vehicle, they merely turn up, climb into the cabin and drive.

However, from being a “steering wheel attendant” much of the time, the modern truck driver will become a logistics expert, running their truck from and to the terminal as part of a highly sophisticated delivery and pickup scheme. Automatic side-loading systems will have almost universally made cargo handling at transport terminals and pickup points a matter of only a few minutes. 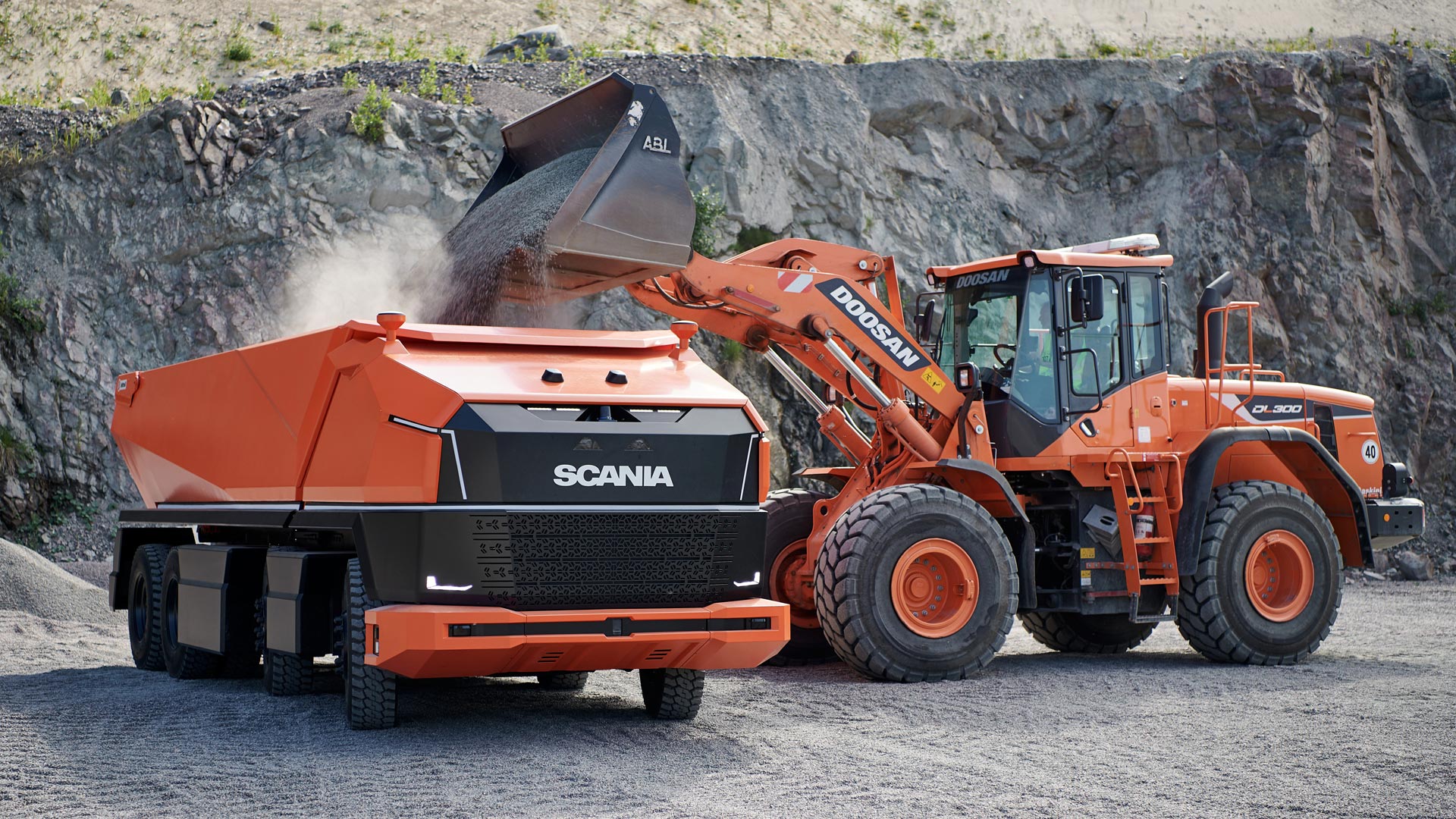 Via a network of onboard computers, the driver gets continuous information about the status of the whole rig. Specialised dynamic systems register when the vehicle behaves erratically or moves unexpectedly or when the driver makes a mistake. They also monitor the flow of other traffic. In addition, the systems intervene, take corrective action or alert the driver to steps to take or whether maintenance is required on the vehicle.

A host of minor systems support drivers in their work and interaction with colleagues and their home bases. Navigation and positioning equipment is mandatory in every logistics system. Consequently, these systems adapt automatically to each truck, its performance and technical condition, and the driver’s capability. Load-handling systems are fully integrated, of course.

Other systems monitor the driver’s medical condition, advise on when to take breaks, meals and, perhaps, exercise. Recommendations also consider the position of the vehicle, weather conditions, roadwork, congestion, suitable detours, facilities along the road (gyms, restaurants and toilets, for instance), time schedules, cargo condition, etc. The driver can even enter a list of favourite restaurants or dishes into the onboard planning system at the start of each trip, day-by-day or even week-by-week.

A significant advance is that the driver is no longer bothered by unnecessary information. Unless the driver calls for specific information, only the essentials for safe driving are displayed. Most driver commands and responses by the system are given by voice. As soon as something undesirable occurs, a message advises the driver on how to drive more economically or provide navigation assistance.

Road, train, and ferry fares are charged automatically to the haulier’s account based on the vehicle’s weight, and the distance travelled. So naturally, this is monitored via satellite continuously. 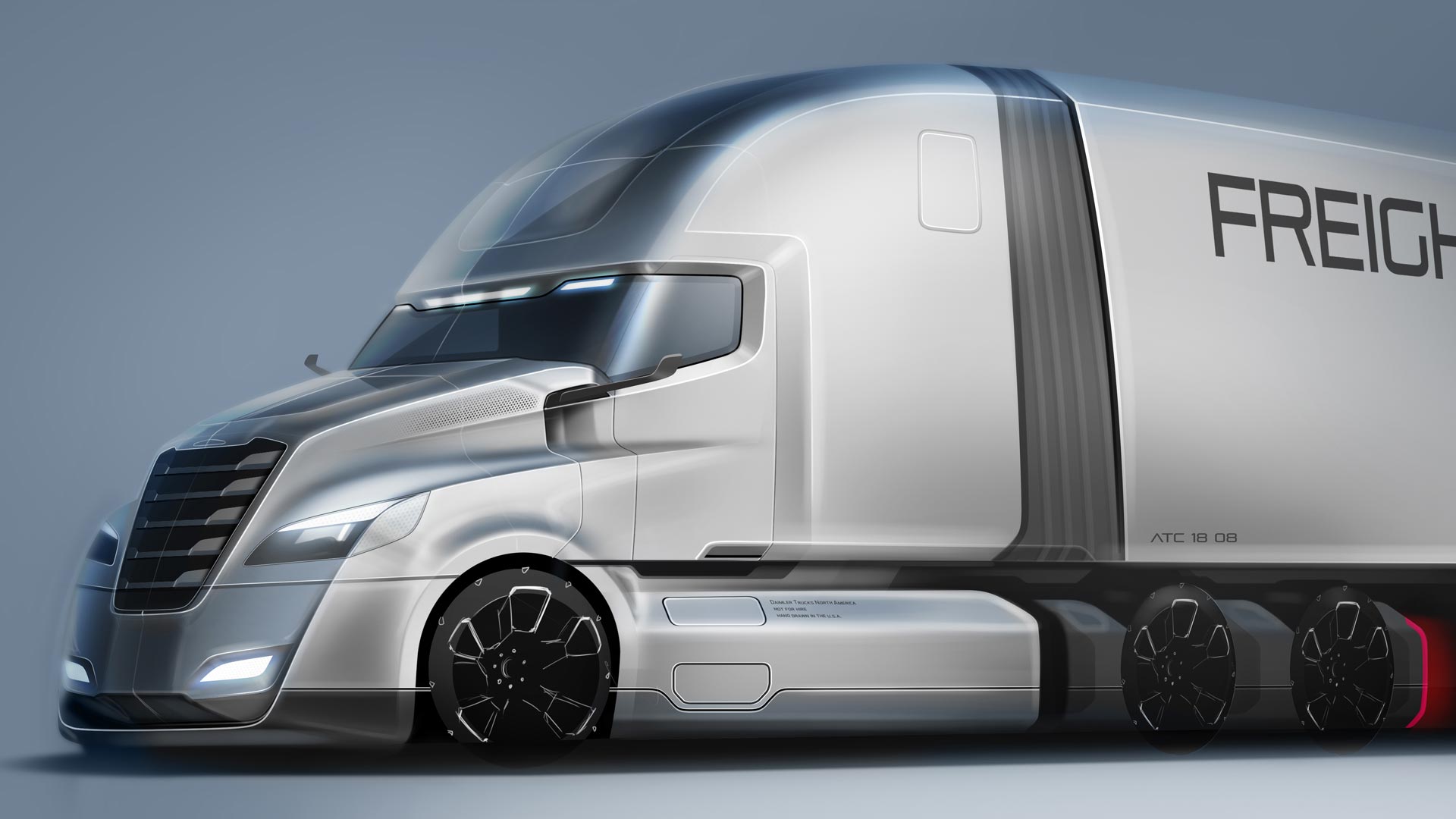 Experts predict that trucks of 2050 will utilise lighter construction to allow for increased payload. Consequently, this is achieved by ever-smarter optimisation and dimensioning of materials and technologies and extensive use of more lightweight materials such as aluminium, magnesium and high-tensile steel. In addition, new types of “plastic” are lighter, durable, and no longer petroleum-based.

For many years now, automotive manufacturers have clearly imprinted all materials in vehicles for easy recycling. This technique flowed from producer responsibility in car manufacturing in the early 1990s. Vehicle manufacturing fully implemented an electronic recycling marking system in 2008, in conjunction with the introduction of producer responsibility for trucks and buses. As a result, all materials are now recycled and handled by certified material brokers. 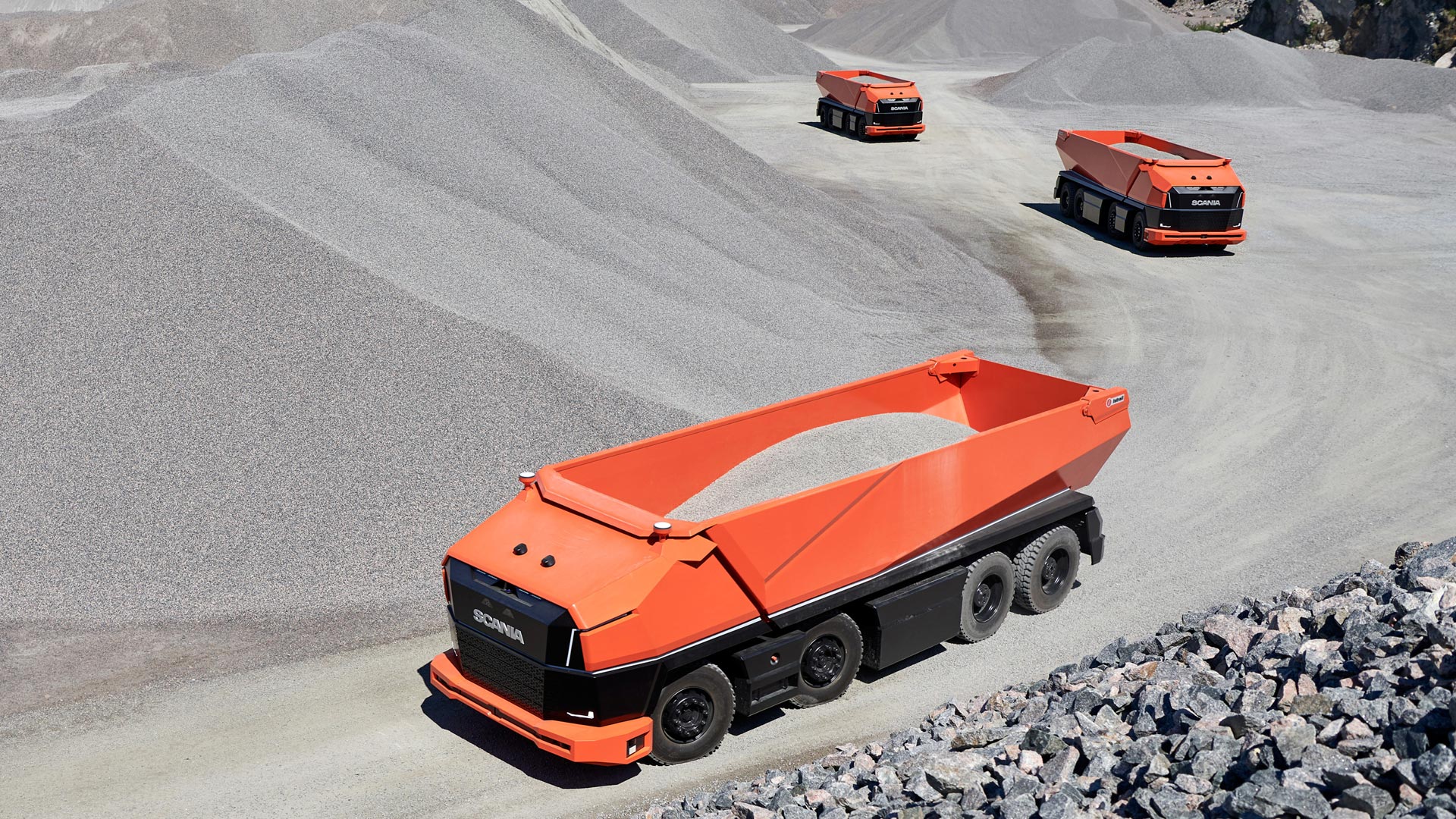 In 2050 cities will be as busy as ever from a business perspective but very peaceful from a traffic standpoint. Therefore, only zero-emission (ZE) vehicles will be allowed in city centres besides bicycles.

ZE buses run continuously without a need for timetables. ZE trucks carry all the supplies needed into the city. The trucks like Scania’s NXT’s load is replaced with a return load of goods and recycled materials at automated loading ramps.

Since the introduction of click generators at the front of the very silent ZE vehicles, accidents involving pedestrians will reduce significantly. On the other hand, but not surprisingly, bicycles are widely regarded as the most significant traffic hazard in city centres.

In larger cities, post and newspaper deliverers will get replaced by the post band – a network of conveyors initiated by the explosion of e-trade in the early 2000s. The post band will carry items up to 15 kg and 20 litres straight from the shops or goods terminals to the entrance of every building. Consequently, this will virtually eliminate small distribution trucks in built-up areas. Instead, small ZE trucks will take care of bulkier items.

While some of these forecasts may, at first, appear somewhat far-fetched, the next time you climb into the cabin, a new Mercedes-Benz or Scania have a closer look at the technology already installed in the vehicle. Because in future might not be too far away.