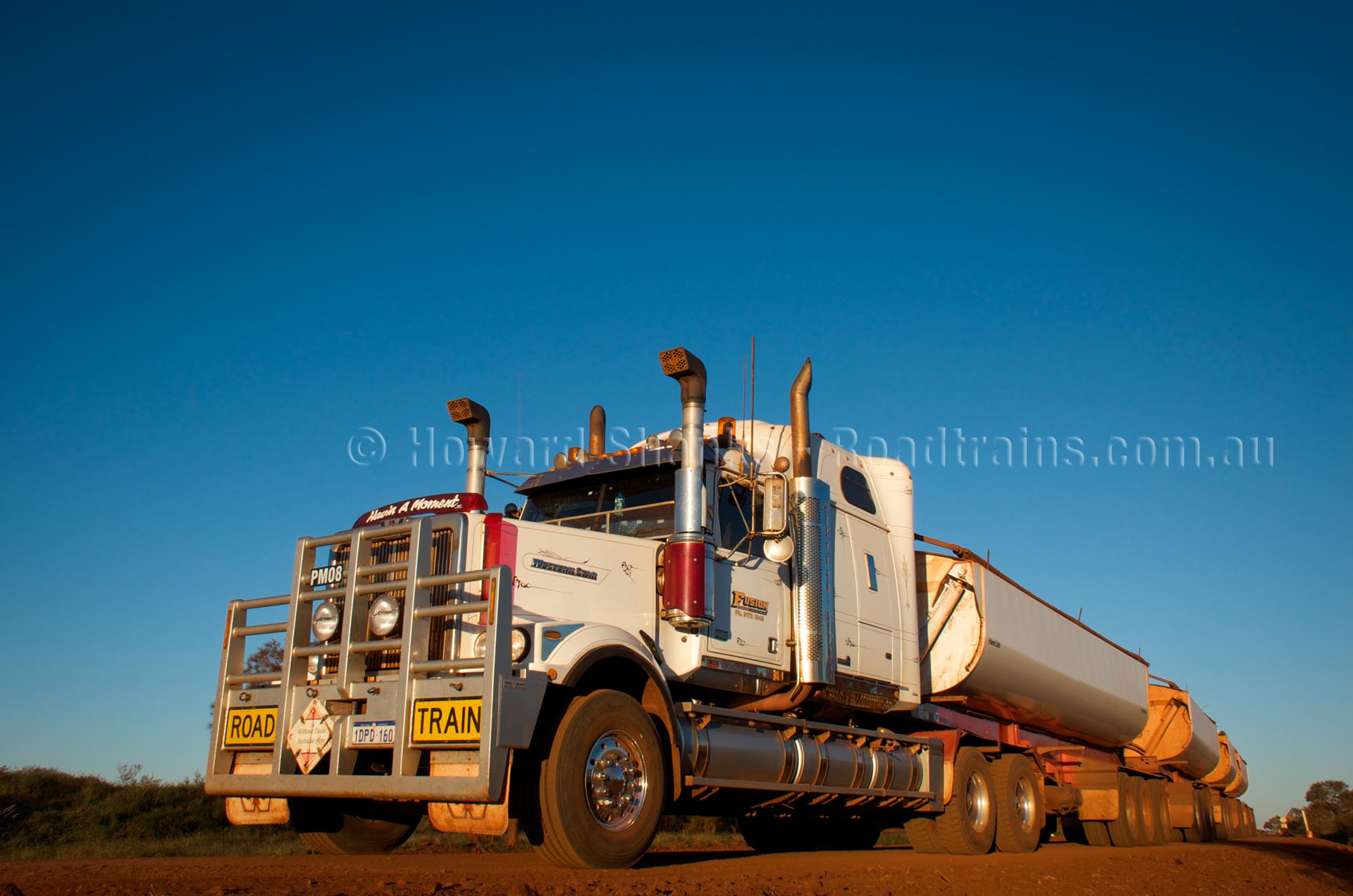 If you recall at the conclusion of last month’s Cat powered Mack Titan review Richo offered us one of their 6900FX Western Star for another used truck review. This week he’d arranged a few runs out into the desert to collect plant and equipment as well as a few iron ore runs.

Its mid-November in the top of Australia’s remote Pilbara region and hints of the wet season’s onset is brooding regularly in the night sky. For Richo, this signals the start of the busy season. Along with his regular iron ore cartage contract, mining contractors urgently try to move plant and equipment out of the desert before the roads become impassable due to the wet season.

Out in the desert, the mercury soars well into the 40 degrees. At night the temperatures plummet into the single digits. In the hot red dust of Western Australia’s remote Pilbara, it takes all of 600 horsepower plus to pull this 170-tonne payload.

Travelling at this close to the wet season provides additional hazards for truck operators, away from the main highways, the bitumen roads are often only ten feet wide, and the shoulders are very soft. Meanwhile long stretches of dirt become slushy mud with deep wheel ruts and the creeks. River beds which are normally dry for most of the year, can suddenly rise metres with raging water without warning.

“You ready for a big couple of weeks?” Richo grinned when he met me at the airport. “We’ll get you settled in, then we’ll go and check over the Western Star, and it’s trailers. 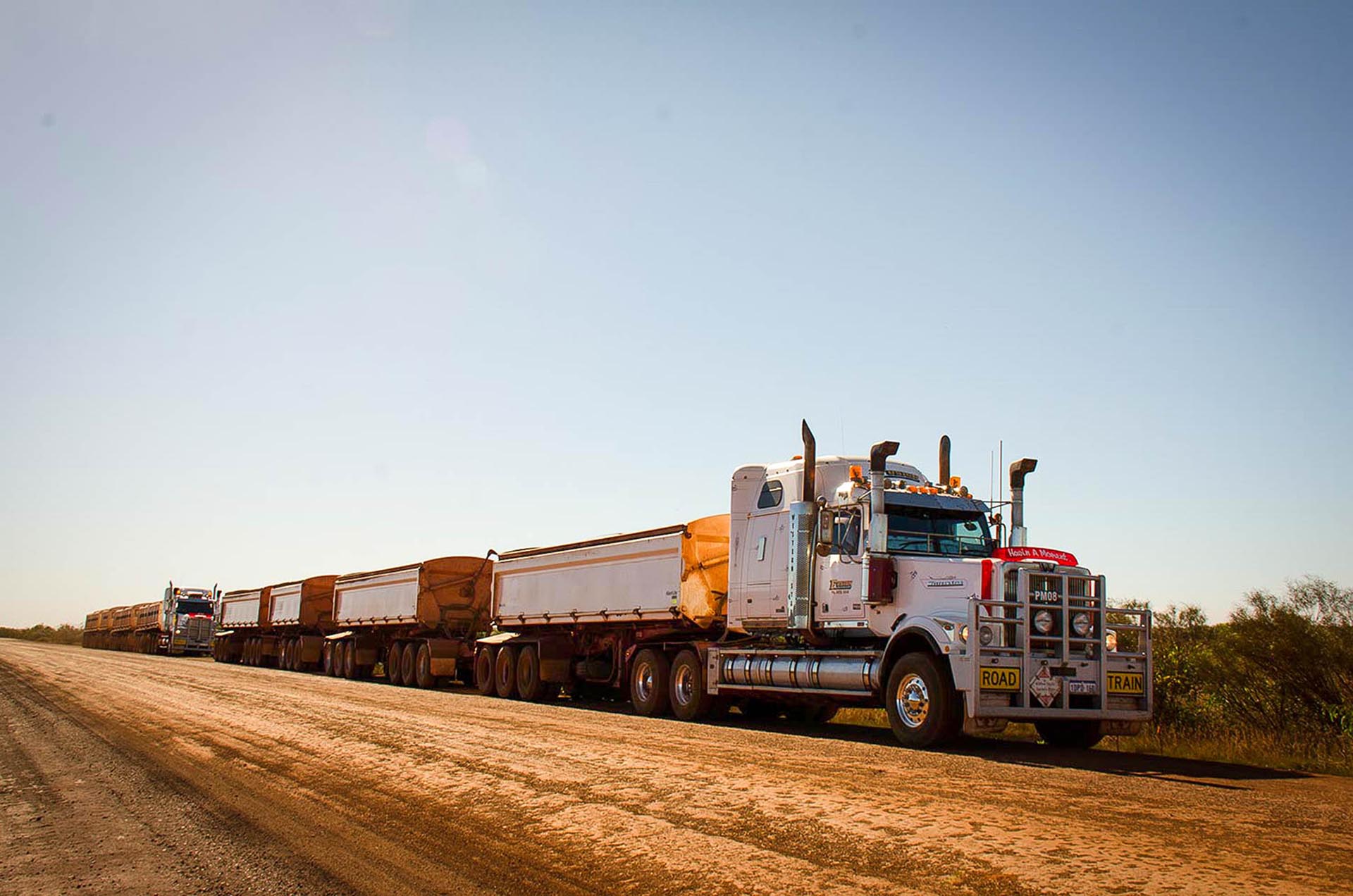 Glancing over the Western Star 6900FX 6×4 specifications over a coffee in the crib room it’s quickly apparent that it packs some heavy-duty equipment too. Upfront a Cummins Signature rated a 620HP, runs through an Eaton RTLO22918B, which sends the power through Meritor RT52-185G final drives with a 4.88:1 ratio. On top of that, it’s rated for road train work up to 170 tonnes.

The interior of this truck is extremely well appointed. 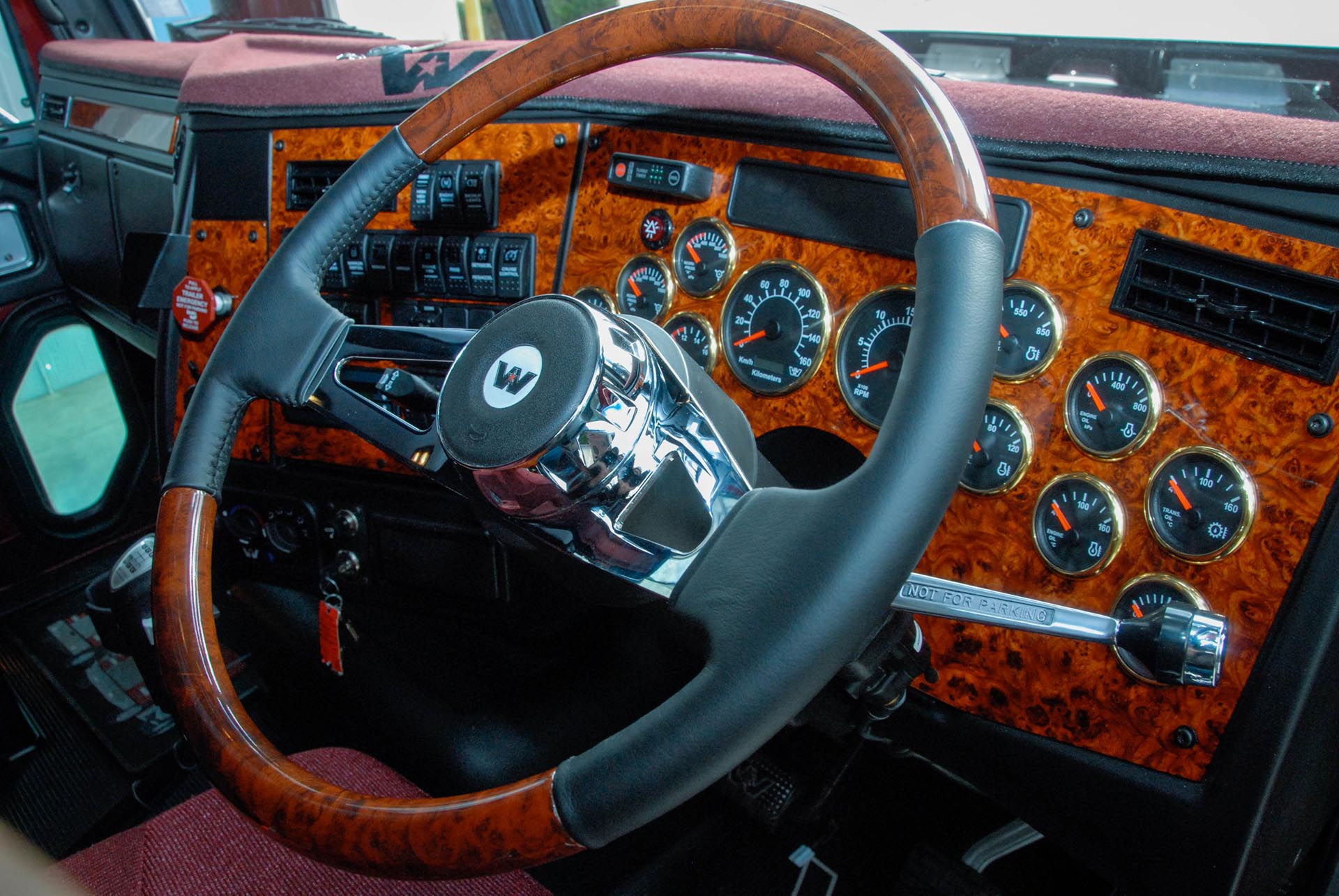 The interior of the 6900 Western Star is well appointed.

For long haul outback operations, the inclusion of the large 68-inch Stratosphere Sleeper was more than addition. It certainly provided all the creature comforts of home, with an assortment of cabinets, which allow all my freshly ironed clothes to hung neatly. Then there was space in the lower cabinets for enough groceries to last more than a week in the bush. Meantime the bed included a decent quality innerspring mattress. However, the pièce de resistance was the inclusion of the Ecowind bunk air-conditioner.

By sunset, I’d connected the quad and tested all the tippers were operating, checked over the truck and neatly stowed my tools and that spare parts kit I’d used in the old Titan on the last swing. Finally, I made the bed and then detailed the interior.

A couple of hours before sunrise, I turned the key, and the Cummins under the hood leapt into life, I walked around the road train checking the couplings and lights while the system built up air pressure. Half an hour later the big 6900 Western Star was well on its way to the Iron Valley mine site to load iron ore. Twelve and a half hours later, I’d tipped 109.62 tonnes of iron ore into bunker-9 at Finucane Island, pulled up next to the fuel bowser back the depot and topped up the two front tanks with 585 litres of diesel. For an EGR Cummins, I was surprised with the economy which worked out 1.16km/l for the 679-kilometre round trip.

The next day, roughly 90 kilometres into the trip to the mine the check engine light and buzzer came on. Luckily there was a parking bay a not too far away. After some investigation, I discovered that the warning was signally low engine coolant. Luckily the big Western Star has the header tank conveniently located on the firewall. The tank had plenty of coolant in it, and the fan belt was in good condition so the engine should operate correctly in theory. It took me another half an hour using a process of elimination to discover that the low coolant sensor had failed. 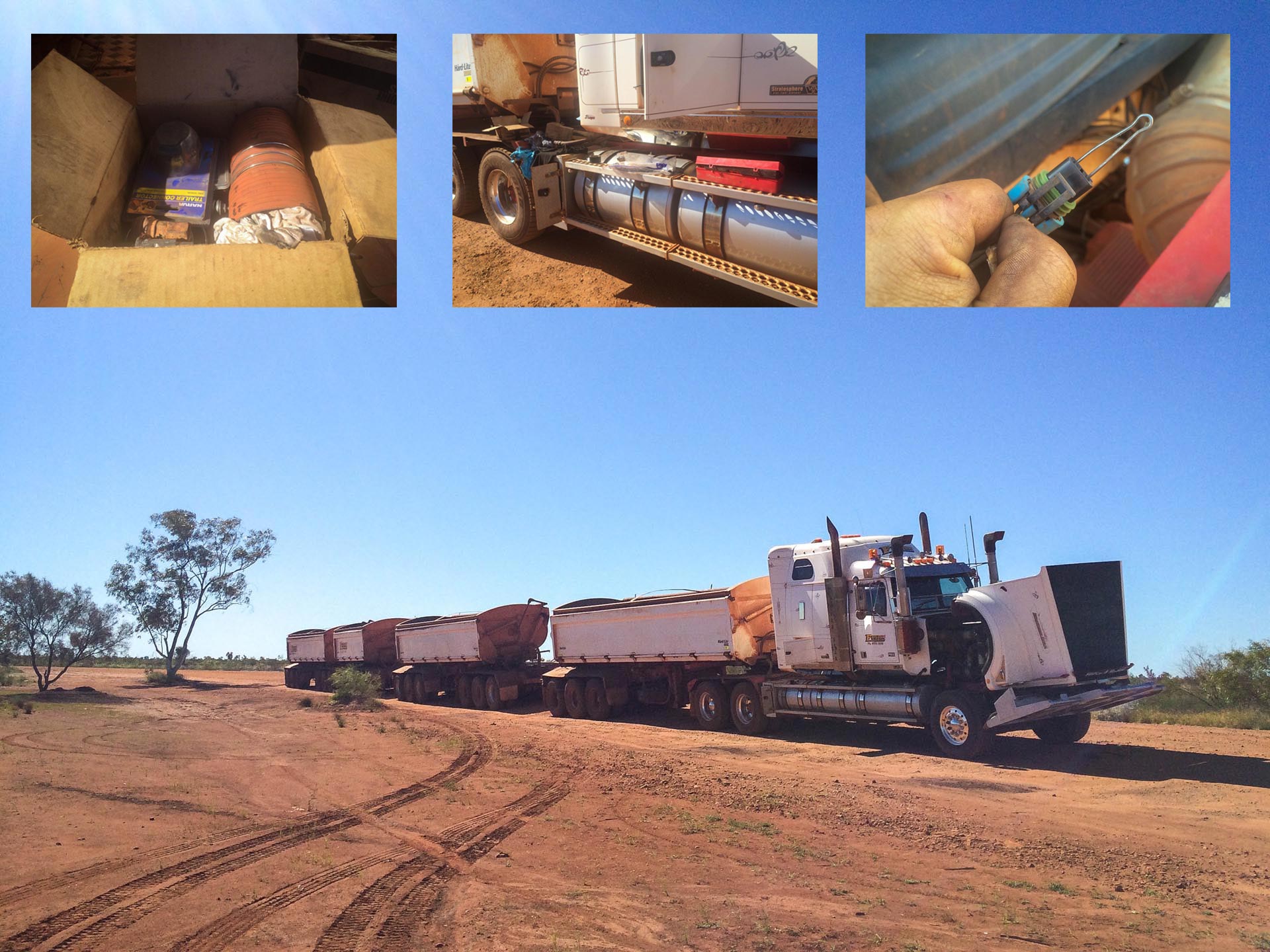 When a sensor failed a makeshift repair got the truck rolling again.

Luckily, I’d stowed my breakdown kit in the bunk toolbox. I disconnected the wire to the failed sensor and used a split pin to complete the circuit, wrapped a generous amount of insulation tape around it up then secured it with a cable tie. After packing up my tools, I lowered the bonnet and fired up the Cummins once more. Thankfully my fix worked, and I then continued onto the mine for another load of iron ore.

Richo met me at the fuel bowser and enquired how my run was and how I liked the 6900 Western Star. He added that he had some bush work for me the next day. “Once you’ve unhooked the quad set, run the ‘Star over the pit, Rob’s expecting you,” Richo said. “He’s got a new sensor, and the boys will grease and check it over for you. Grab my work ute and head into town and get yourself plenty of tucker and water, you’ll be out bush for a good week or so if everything goes well.” 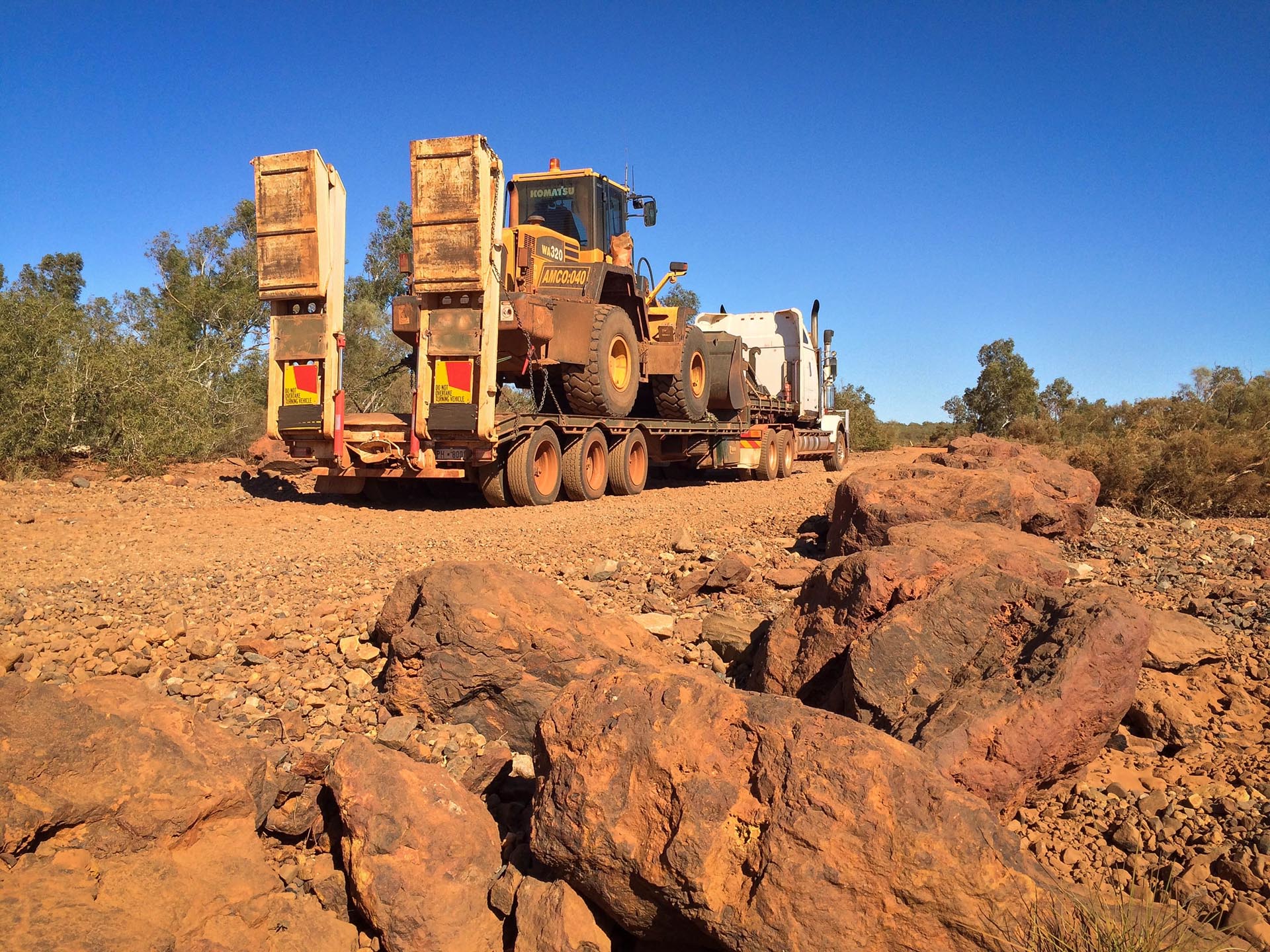 At daylight the next morning, I set about finding the drop-deck, flattop and dolly Richo had asked me to take. He had a rather extensive list of vehicles, plant and equipment that needed to be collected returned to Port Hedland and de-hired from worksites dotted along the Roy Hill rail line.

Not too far from the Newman T-Junction, I veered left and headed east on a well-used dirt road that loosely followed the Roy Hill rail line. As the road deteriorated, it became apparent just how well these big 6900 Western Star ride. In fact, this truck’s handling is by far one of the better, used trucks, I’ve tested in recent times. Its road manners were are impressive, to say the least. 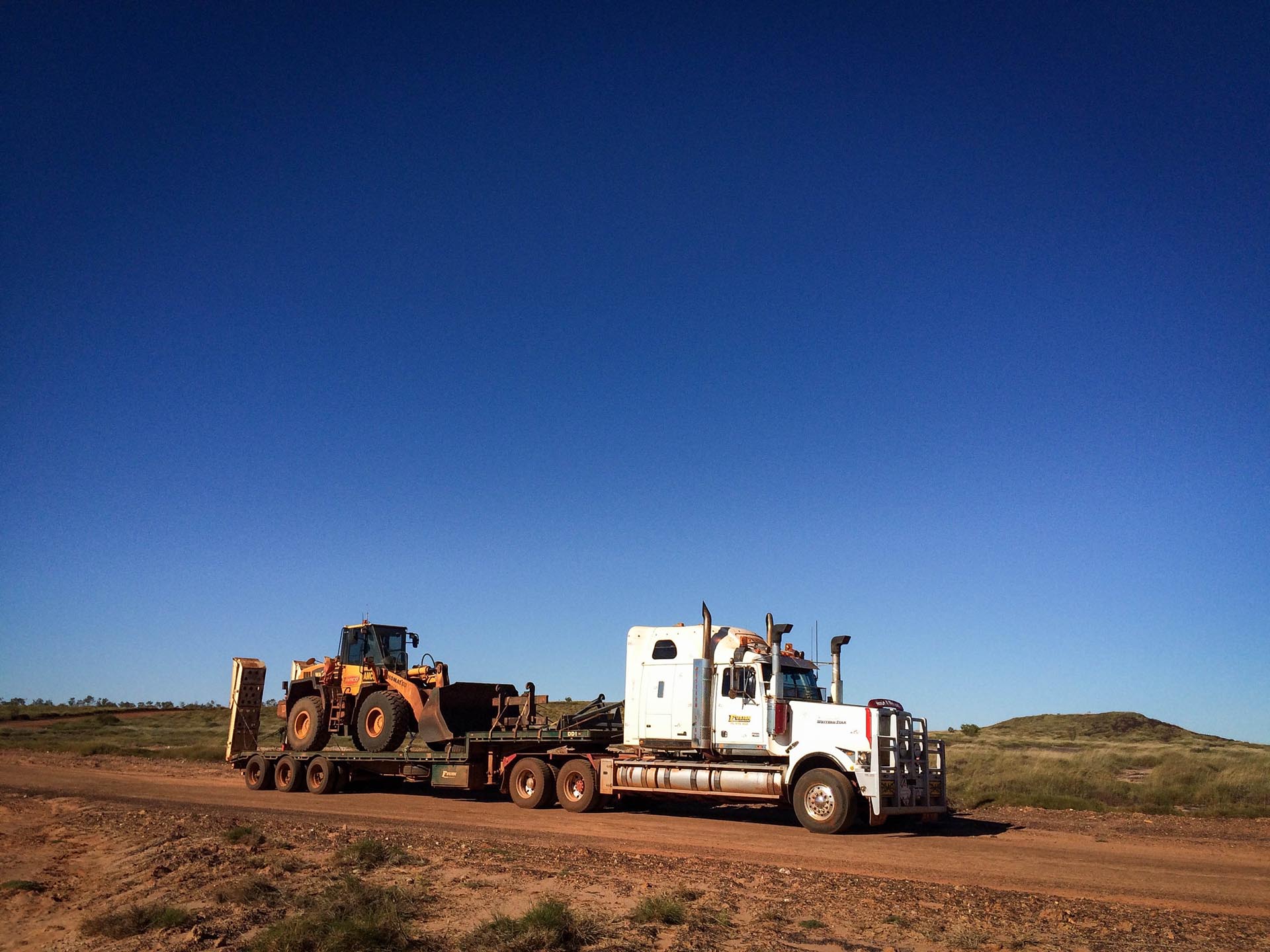 Because the cabin on the 6900 model sits up 85mm higher than a typical highway model it opens up the area for air to flow around the driveline components. It also means that the cab’s air conditioner doesn’t have to work so hard to remove all that additional heat and up here in the stifling heat of the Pilbara that’s a significant asset. Meantime a 1570 square inch, heavy-duty copper/brass radiator core keeps the 6900 cool, especially when working hard at 100 per cent engine load.

This truck only had an oil cooler fitted to the front diff, but even out here pulling 170 tonnes, the diffs only run at around 45 to 50 degrees centigrade. That’s terrific because in my book, especially when you consider that the same diffs other trucks in the fleet sometimes run up around 90 to 100 degrees. I suspect Western Star knew this when they raised the cabin that 85mm. 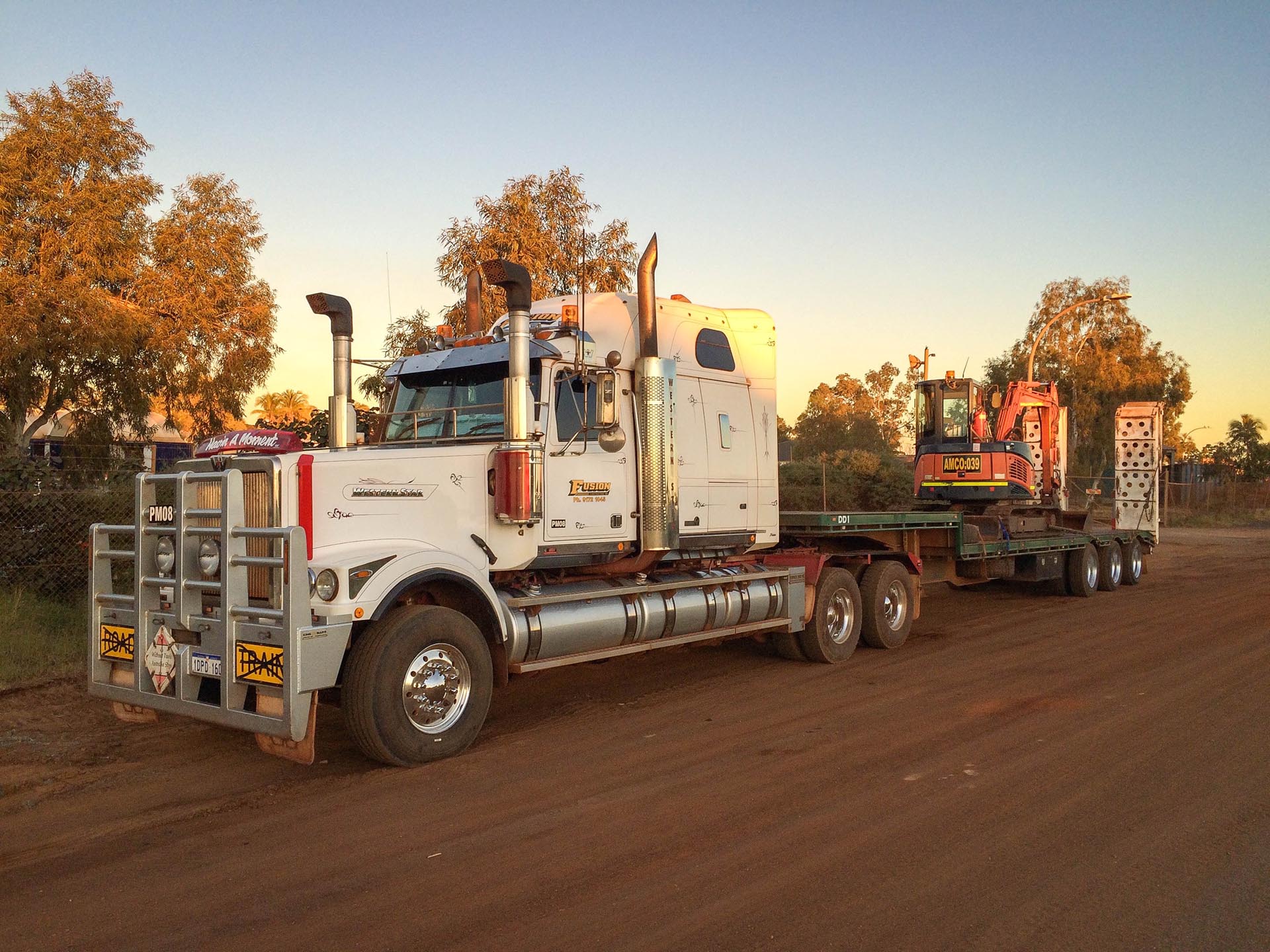 When it comes to cockpit design, the dash layout in Western Star’s is arguably one of the better arrangements to hit the market. Gauges are clearly visible and arranged in a configuration that allows you to see them all at a glance.

Meantime the switchgear in the 6900 Constellation is yet another well thought out and functional design. The rocker-style LED switches illuminate with active LED indicators when turned on. The LED’s provide improved reliability over conventional incandescent bulbs which only have a life of 4000 hours compared to the LED’s 100,000. Each switch uses single multi-pin push-on connectors and integral locking tabs, ensuring secure, foolproof connections.

Complimenting the lavish interior on this 6900 is the increased access to the sleeper. The spacious distance between the seats gives a driver the space required to fit in a large fridge and still have ease of access to the bunk. 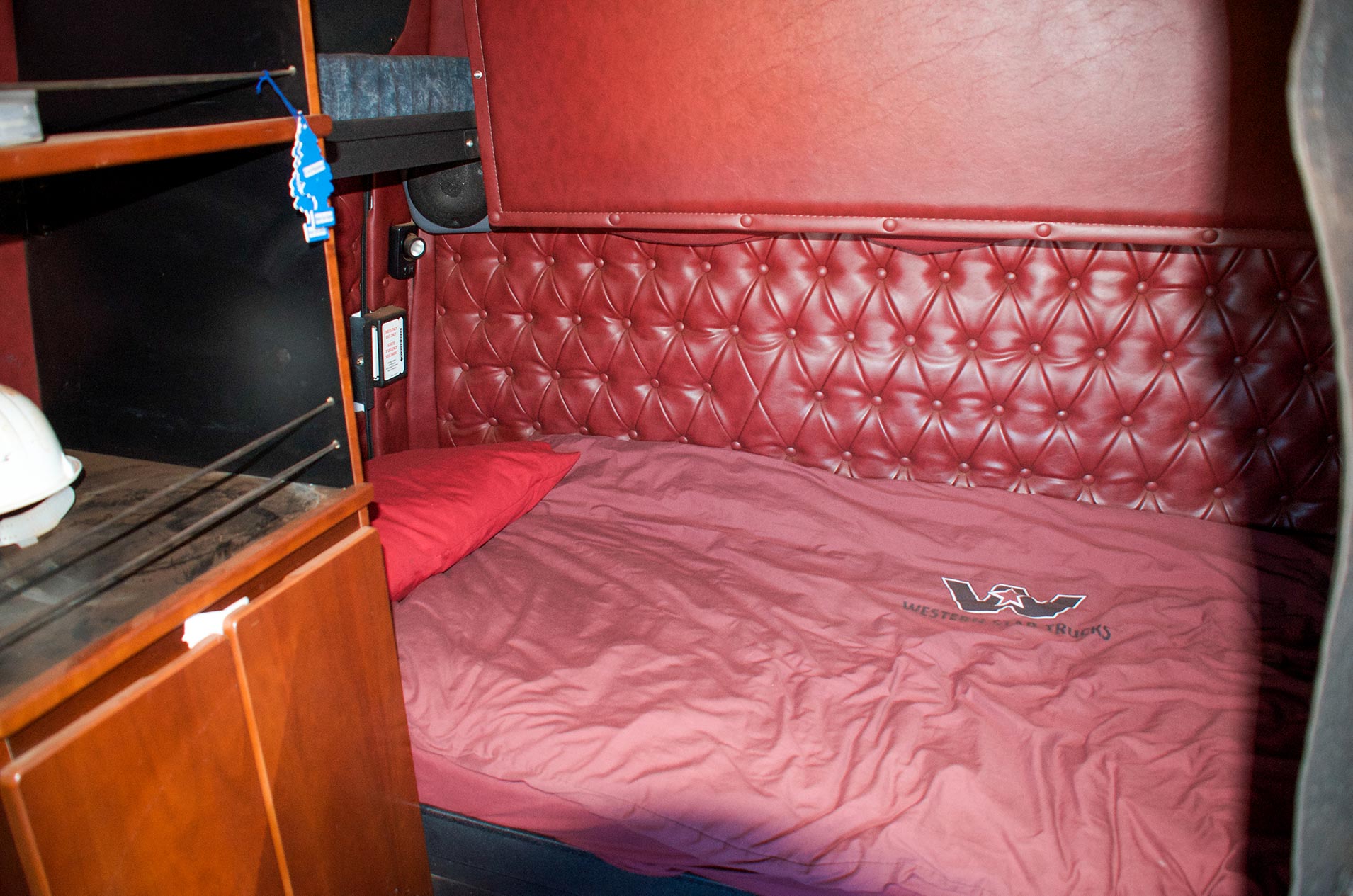 These heavy-duty 6900 Western Stars are indeed built tough for the harsh conditions and come standard with two CR Turbo 2000 air dryers with heaters and a Cummins 37.4 CFM twin cylinder compressor. Other standard features on the 6900 include dual 330mm (13″) external stainless steel Donaldson air cleaners with water-resistant elements, and 152mm (6″) diameter raised ducting and intakes which feed the big 16-litre Cummins plenty of air.

It certainly was an exciting couple of weeks roaming around the Pilbara collecting machinery, but what made so enjoyable was the luxury of 6900 Western Star and its large 68-inch Stratosphere sleeper. 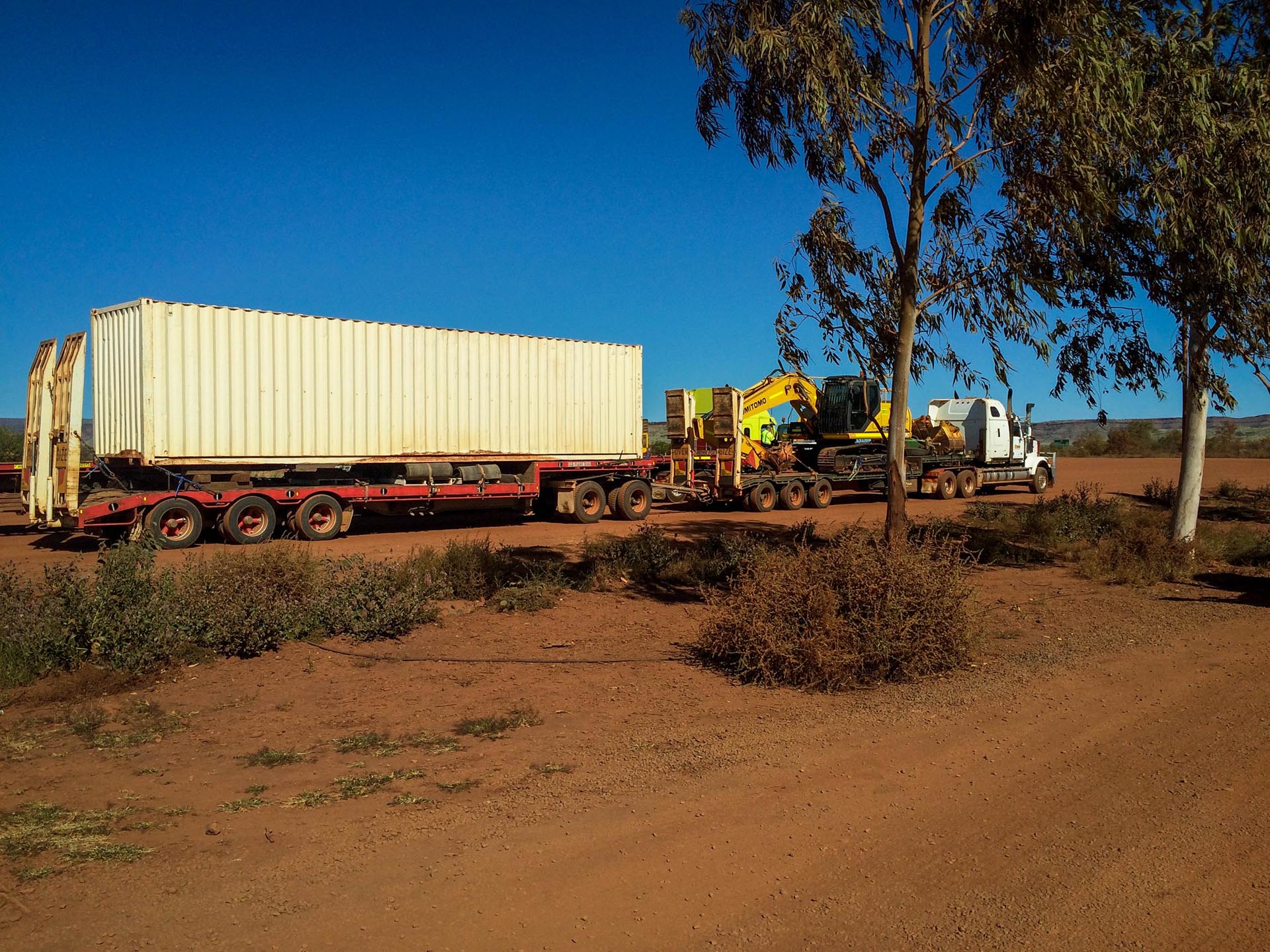 At the time of writing this truck had 809501km on the clock with only a mid-life on the engine. It was still running fine, and the engine oil samples were returning normal wear results.

However, trucks like this that work on mine haul operations typically have high utilization, mostly double-shifted. Their maintenance generally is of a high standard to meet all the compliance requirements for hauling mine products. But be aware that haul road grime gets into every component and is time-consuming to clean off. At the end of their life on mine haul operating these trucks often require an extensive rebuild to get them back to an as new condition.

Scania R730 on the Long Run