Over the past decade PBS vehicles have steadily been increasing the efficiencies and productivity of heavy vehicles as demand on the freight task increases. We sent Howard Shanks to northeast Tasmania to investigate one of the latest PBS vehicles on trial in the state. 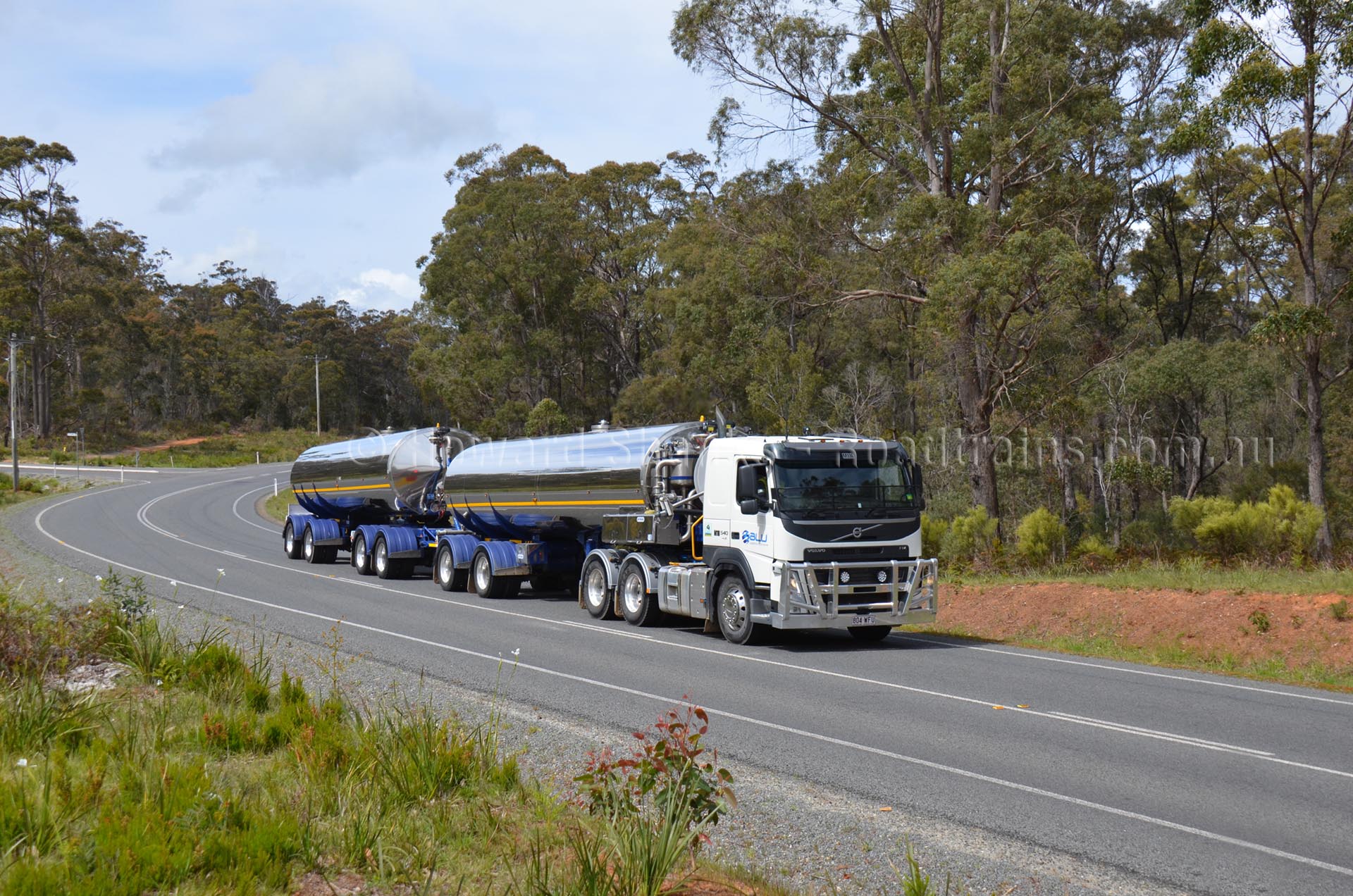 The innovative A-Double combination on trial in Tasmania is operated by Queensland based Blu Logistics Solutions who specialise in the collection and transportation of milk, water and other bulk food grade liquids around the nation.

Today their fleet consists of over 40 prime movers and 50 plus stainless steel food grade tankers with 120 plus drivers transporting 500 million litres of milk annually.

Blu Logistics Solutions commitment to excellence has secured many long-term client relationships through cost effective transport solutions by employing the latest technologies to gain the highest productivity and efficiencies.

Testament to this is their long standing track record for leading through innovation. Notable examples include being the first company in Australia to operate GPRS milk collection data transfer. In addition all their tankers and prime movers are satellite tracked with engine data interface right through to their latest A-Double combinations.

“Our commitment to safety, training and providing innovative transport solutions is why we are granted permits to trail new revolutionary concepts such as the A-Double,” Blu Logistics Solutions’ Tim Jensen said. 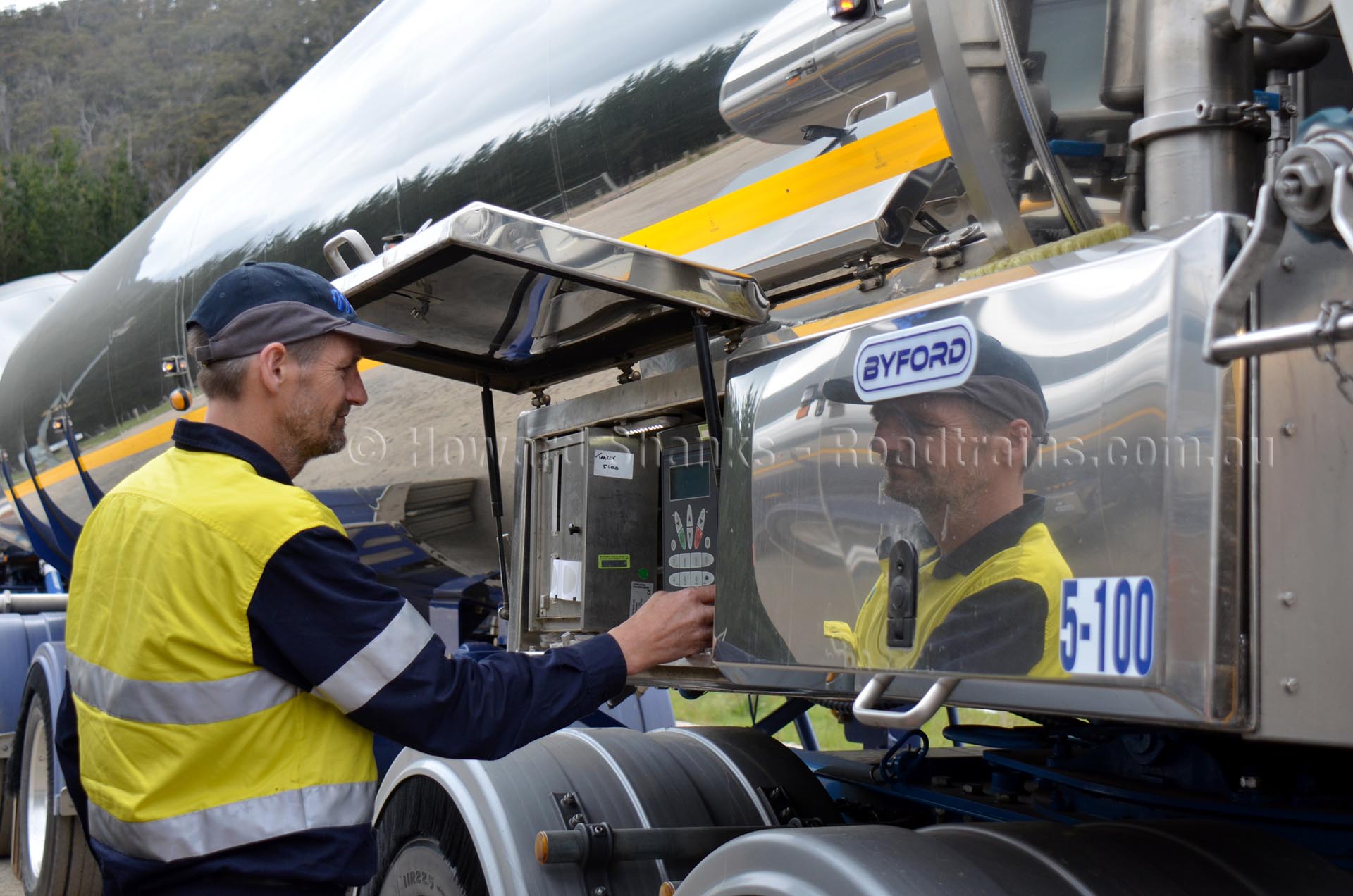 This innovative A-Double combination is built by Moama based Byford equipment, who have been making big inroads with new Performance-Based Standards (PBS) combinations. The new-patented PBS approved concept is set be a real game changer for the bulk liquid market.

The 26m MAXLESS A-Double tanker combinations can carry between 48,500 and 51,000 litres of various liquids. Under Higher Mass Limits (HML), this high productivity combination can transport as much as 74.5 tonnes when pulled by a 6×4 prime mover, or 79 tonnes when coupled to an 8×4 unit on approved routes.

On Level One roads, the design is accredited for a 50.5 tonne Gross Vehicle Mass (GVM) such is the case in northeast Tasmania.

The key feature of the 26m A-Double model is its exceptional maneuverability, made possible by the use of BPW steerable axles on both tankers, as well as a steerable bogie dolly. 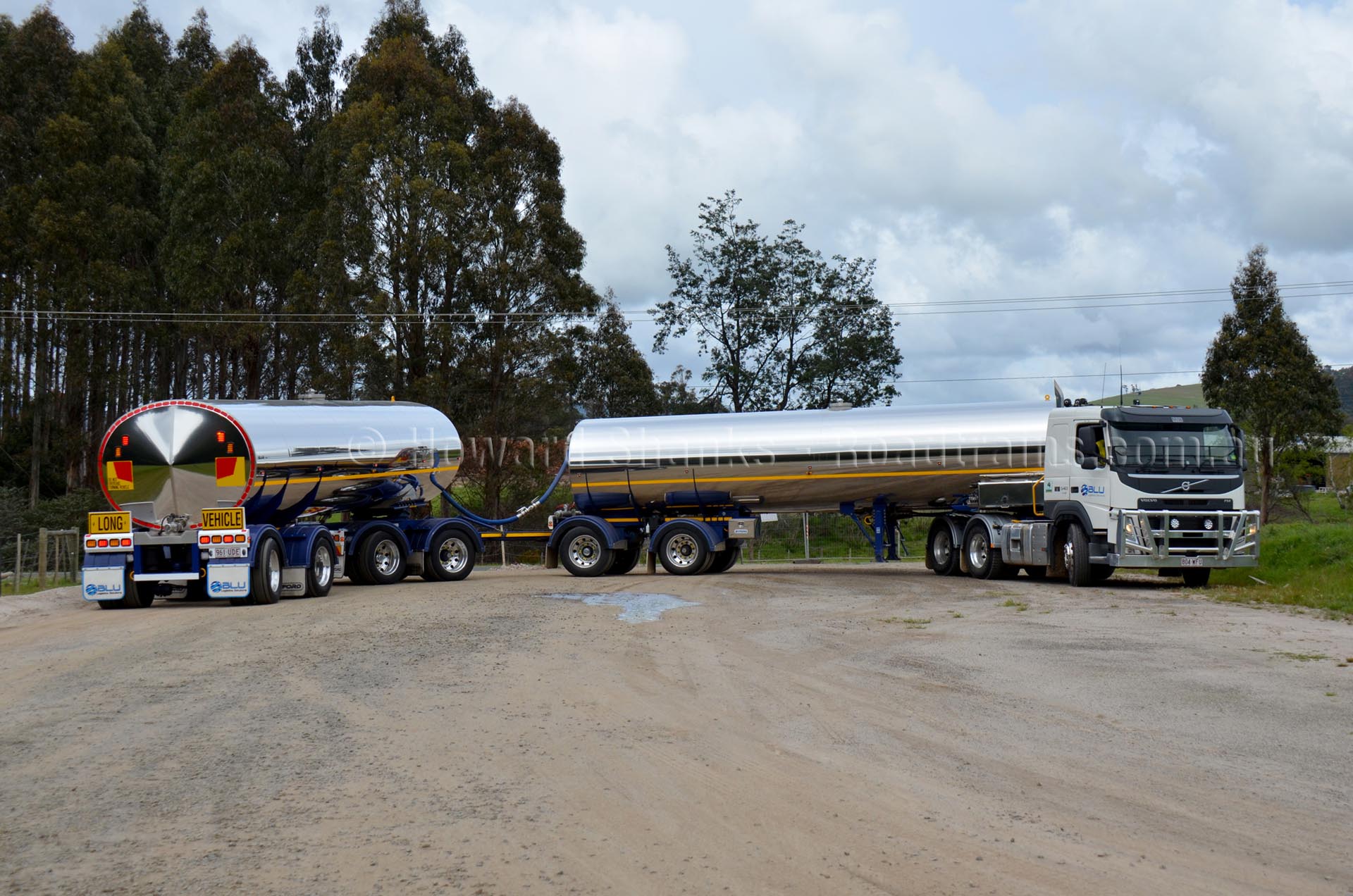 The emphasis on maneuverability also means the A-Double has a swept path of 6.33 meters– making it extremely user-friendly, especially when you consider the swept path for most conventional 19m B-doubles is around 6.7m.

In the milk collection area there are all kinds of variables truck drivers need to take into account when entering and exiting the farm pickup site, for instance there is the size of entrance, type of roads, surface conditions, surrounding property, extraction points and the list goes on and on… 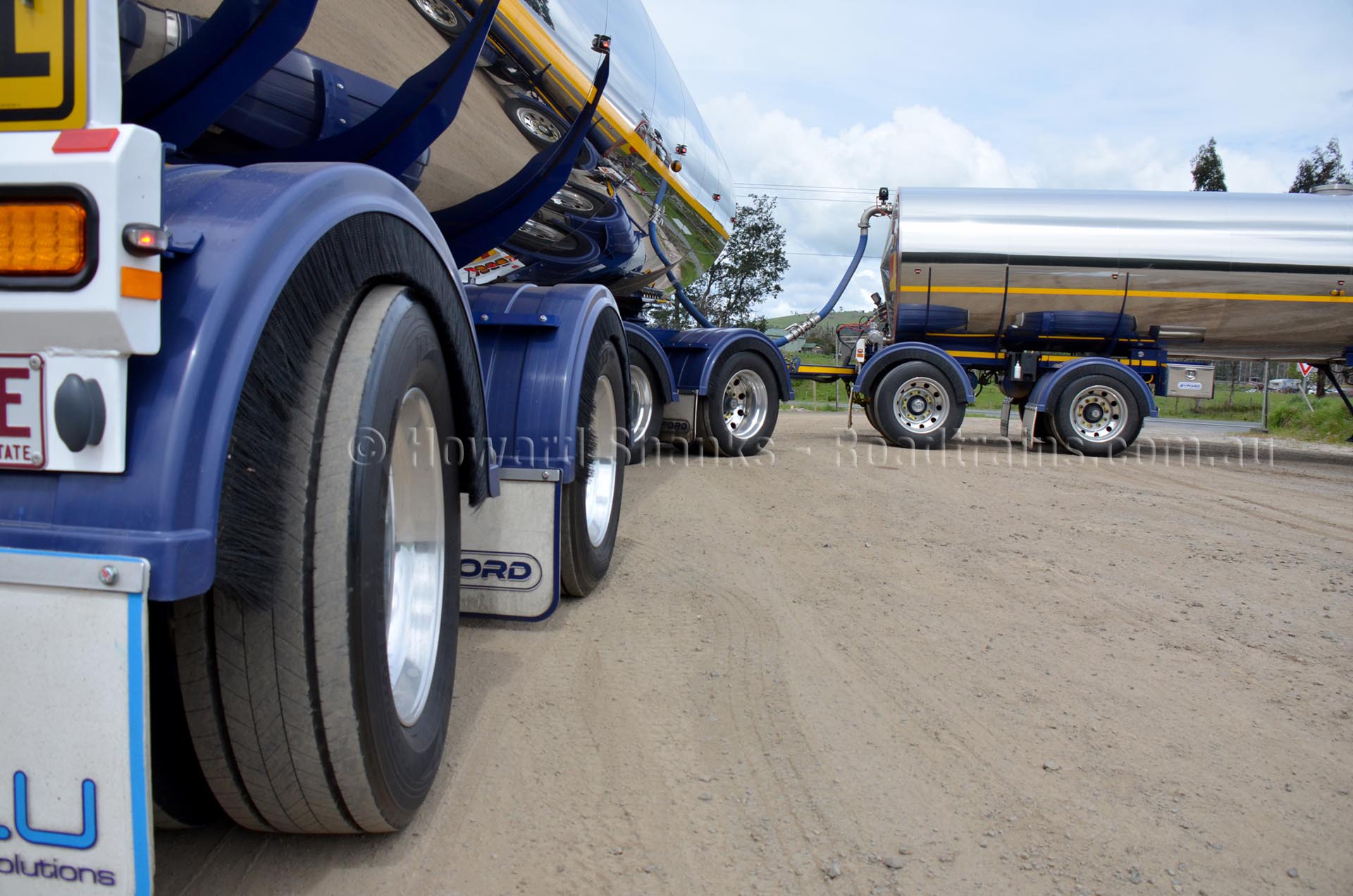 “For drivers like myself, the challenges on a daily basis can at times encompass all those factors at once, especially when the loading area is located on older smaller farms. It can be quite difficult driving a tanker in and out of a dairy farms, and when you use a B-Double it gets even trickier,” Jason Calder, Blu Logistics Solutions A-Double driver explained.

“The dairy farms are not like an industrial site where there’s plenty of space to move tankers around. In a farming environment, you’re dealing with small gravel driveways, dirt roads, tight lane ways, gardens and trees, and you’re certainly not driving in straight lines.” Jason revealed.

“For instance, if you turn too wide, the tanker will definitely hit something. That’s just one hazard that can happen. Another concern is when turning the whole tanker, the tyres might drag, which damages the surface of the road and creates a giant mess for the property owners.” 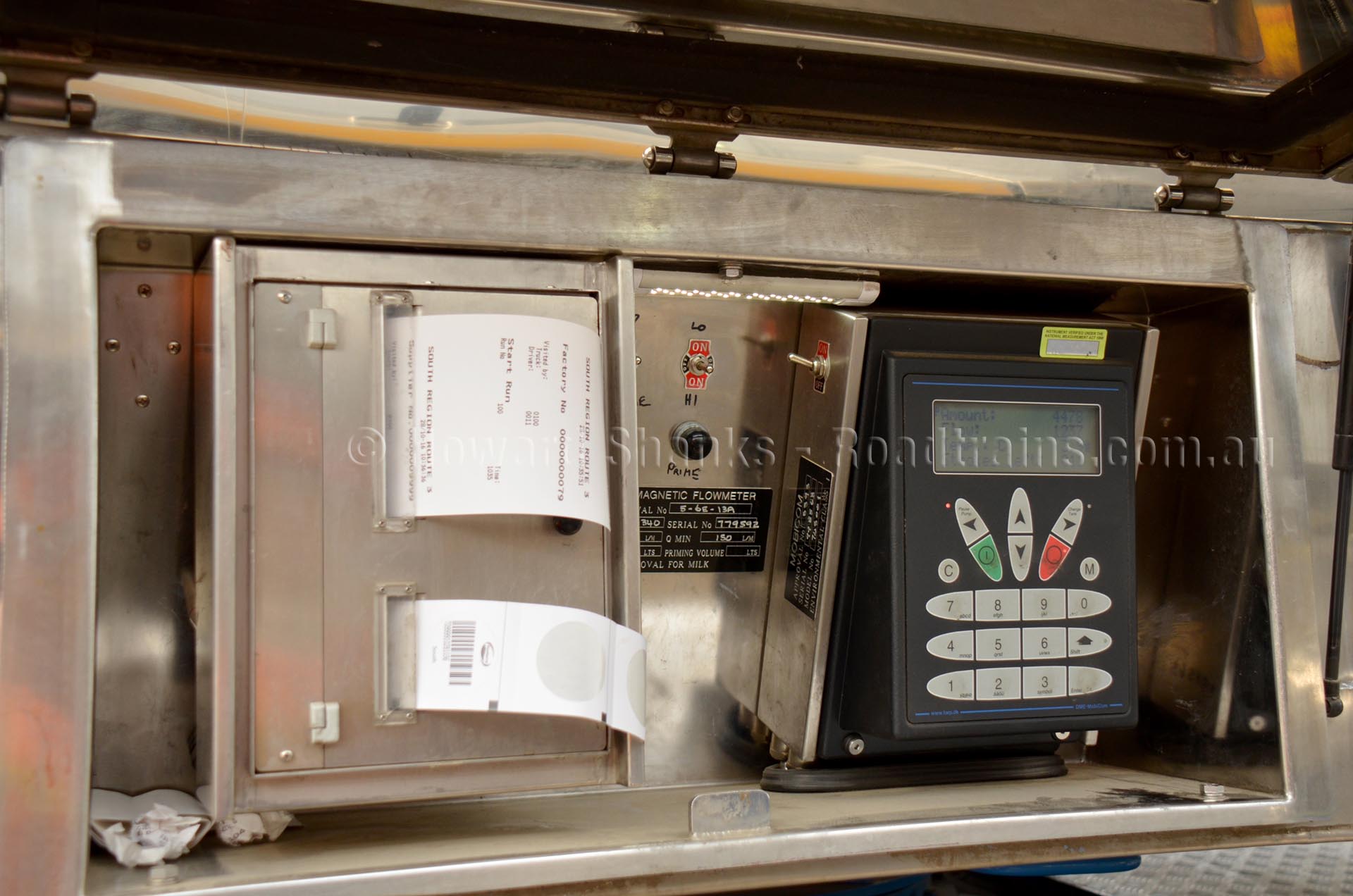 “That’s why we need the most advanced transport equipment available to stay at the forefront of tanker technology, environmental sustainability and maintain the health of our suppliers’ land; so we often have to go the extra mile to ensure a flawless production process,” he added.

What makes the A-Double so maneuverable is the BPW self-steer axles fitted to each trailer and dolly. These are strategically placed as trailing or following axles in the tandem group, which in effect makes the group act, like a single axle, giving the increased maneuverability and reducing road infrastructure damage.

BPW Transpec’s Engineering Manager Ian Thompson points out that because the axles are self steering the driver doesn’t’ need to do anything for the axles to steer. “Each component of the configuration will steer itself according to the road, the load and cornering forces being encountered,” Ian explained.

The self steering axles have a series of undulating pressure bearing in the base of the king pin which make them self-centering, this gives a significant advantage in straight line travel. 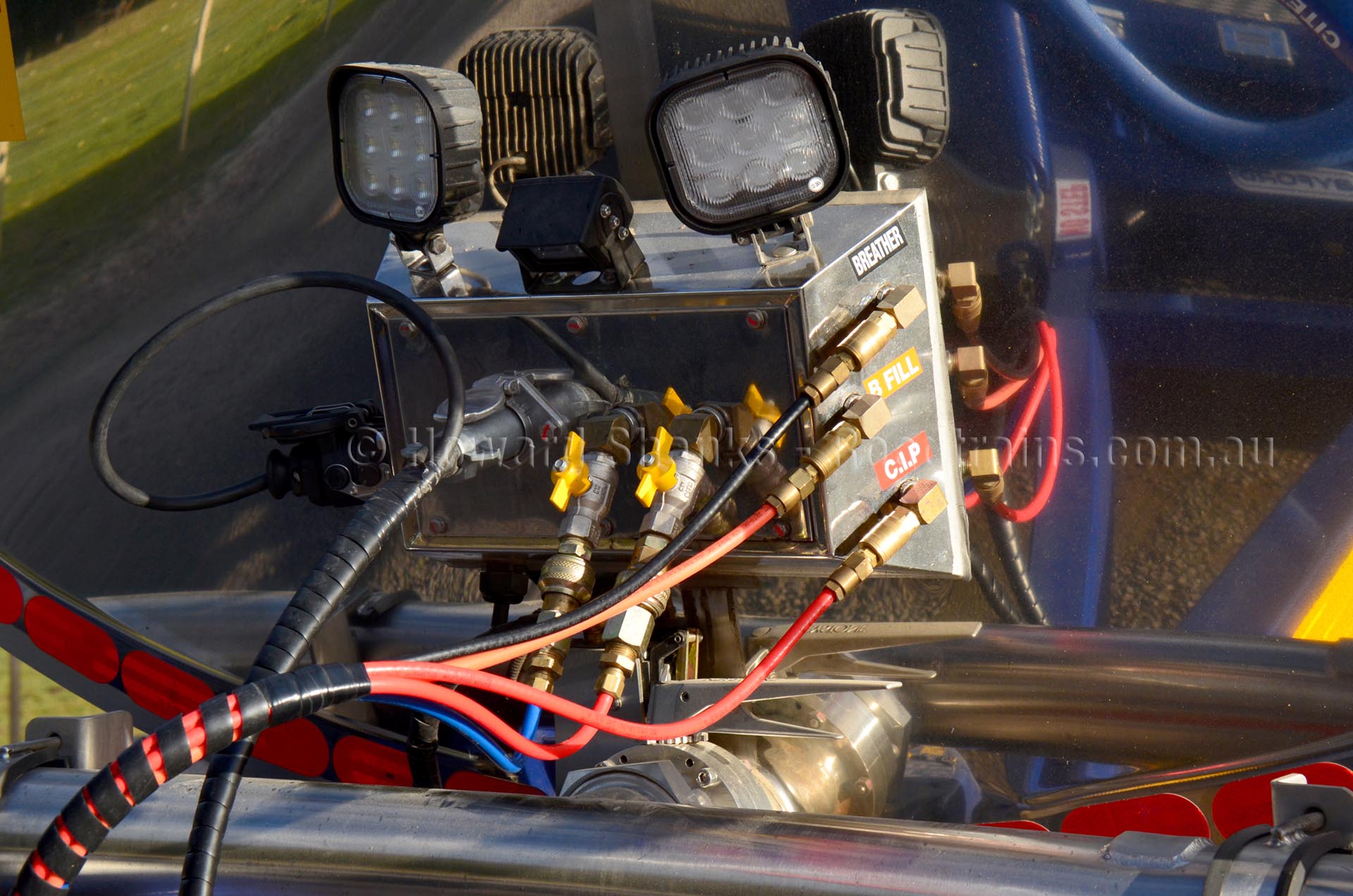 For added safety in extreme slippery conditions, the unit is fitted with a manual override switch so the axle can be locked in the straight ahead position.

Because the Transpec Multivolt EBS measures and counts wheel rotation it can be programed to lock the steering axles at a pre-determined speed to improve straight line highway running.  On this Byford A-Double the EBS automatically locks the steer axle in the straight ahead position at 30kph

A solenoid coupled to transmission senses when reverse gear is selected and the steer axles are locked in the straight ahead position to make reversing the unit a simple operation.

For added safety in extreme slippery conditions, the unit is fitted with a manual override switch so the axle can be locked in the straight ahead position.

Given the additional number of grease points on each trailer’s self steer axles the absence of an auto greasing system was noted.

Byfords’ compliance officer Chris Nisbet explained the innovative designs were up to 47 per cent more efficient than single and B-double tankers now in use. Along with increased carrying capacity, Chris cited the absence of sheer forces on the trailer that destroy tyres and damage the surface of roads as another key benefit.

“We looked at a freight task of 100-million litres, which is typically what one company would pick up in one area,” Chris explained. We did a comparison between a standard B-Double, which is considerably hard on tyres to an A-Double with the steerable axles that had clocked up 167,000 kilometers in 10 months. The B-Double was on its 2nd set of tyres meantime the tyres on the A-Double were only half way through their life cycle.” Chris said. 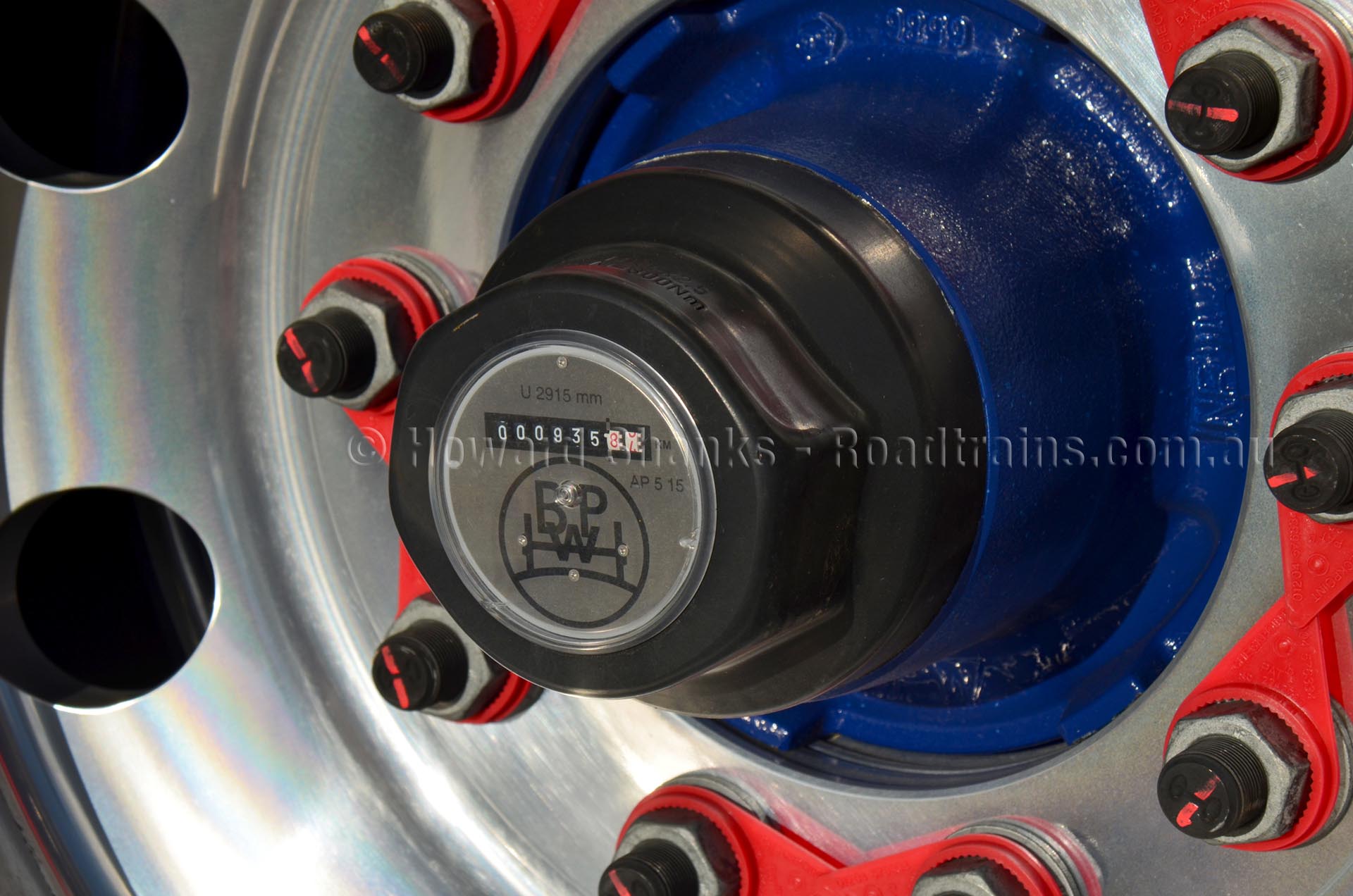 BPW self-steer axles fitted to each trailer and dolly.

Chris explained that productivity gain comes from shifting the axle group configurations of the trailers. “If you take a standard 25 meter tri-tri B-Double which is allowed 22.5 tonne over each tri group you have 45 tonne spread over the six axles.  Conversely with the A-Double we still have the same amount of axles but arranged them in a different configuration of three tandem groups that are allowed 17 tonne over each group. This increases the payload by six tonne without adding any additional axles,” Chris revealed.

On paper the A-Double concept looks attractive, with its increased carrying capacity and improved operating efficiencies and that is what is attractive to operators like Blu Logistics Solutions. Also the concept is gaining popularity with states and councils who are looking at reducing the number of trucks on their networks.

A little over three months into the trial and so far this A-Double combination is proving its worth according to driver Jason Calder. “Turning in the A-double is definitely more user friendly and comfortable. It almost feels as though you’re controlling a single tanker instead of two, “ He said.

“Currently we only running this unit with 44,000 litres of milk but we can have capability to load it to 52,000 litres, however we’re restricted due to the older bridges on the road network in this part of the state.” He added.

Whether this combination will become a common site on Tasmanian roads is still to be confirmed, however the meticulous way that Blu Logistics Solutions are operating this trail vehicle is going a long way to ensure it future in the state. 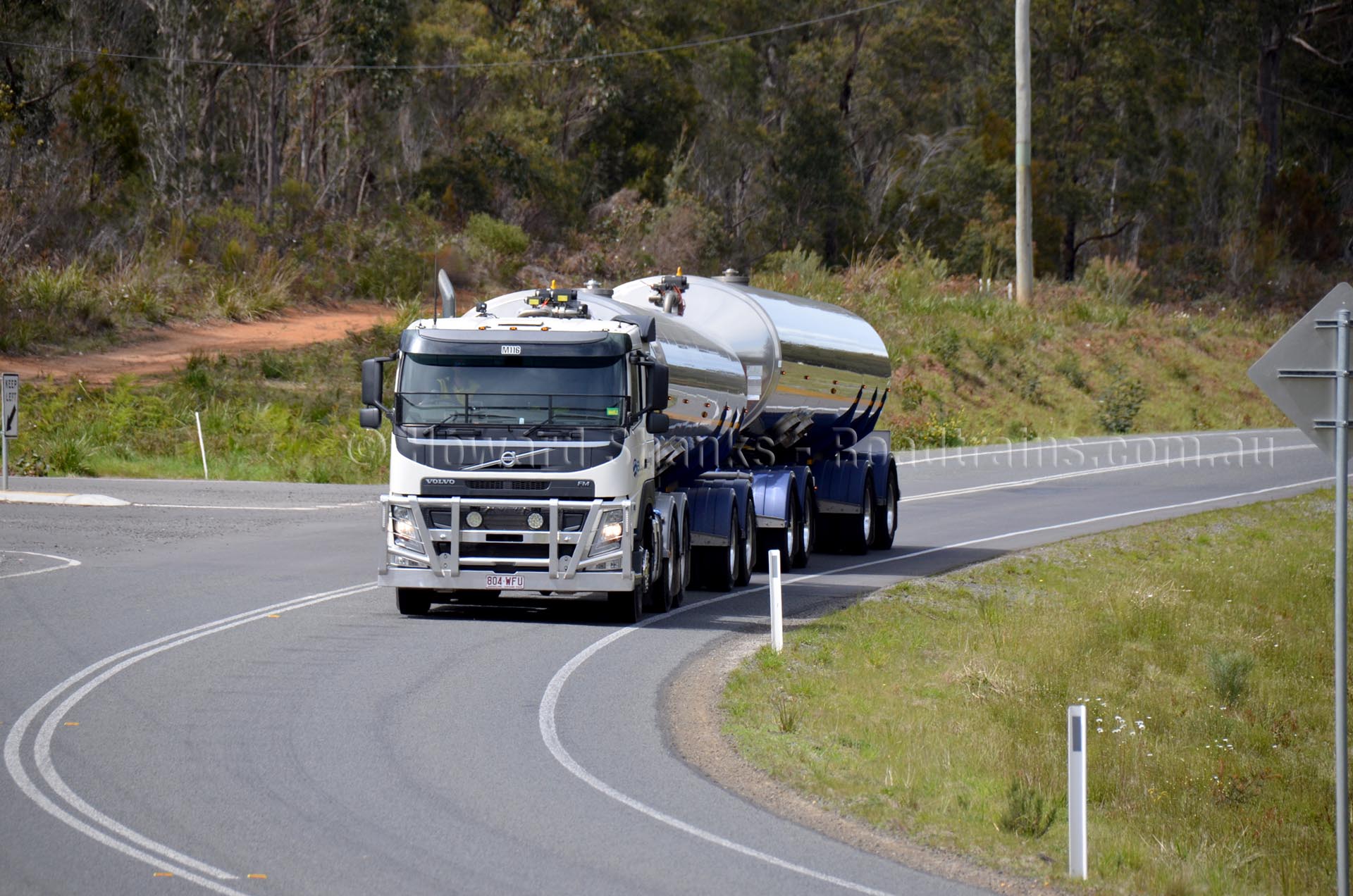 The incredibly versatile FM has continued to provide the platform for the Swedish brand’s strong sales performance over many years, especially in the milk collection industry.

So, what is it that makes the modest FM such a standout attraction? Well, in driver Jason Calder opinion and obviously the opinions of many others it’s really a well suited vehicle for so many jobs. These days particularly, it does those jobs with degrees of comfort, reliability and efficiency that form an exceptionally high standard.

Think about it! Here is a truck that can be found just about everywhere doing just about everything, from pulling a single trailer around cities or hauling a B-double. And when needs dictates, much like the application we see here, slot straight into the demanding spotlight of innovative multi-combination PBS vehicles.

As for the powertrain and driveline spec, there is the 540hp 13-litre engine feeding into a direct-drive version of Volvo’s smooth and incredibly intuitive I-shift transmission, putting power to the pavement through a Volvo drive tandem.

However for all its multi-faceted appeal, the FM is like any other truck in that it has definite limits. For instance, with a standard gross combination mass (GCM) rating of 70 tonnes, the FM 540 certainly has ample capacity for B-Double duties but at weights of 60 tonnes-plus on time-sensitive runs and undulating routes, the 13-litre displacement under either the FM cab struggles to match the deep-rooted tenacity of bigger bore engines.