Sharpgrade’s 1.6 box blade leveller has transformed Tasmanian based Otta Group’s Terex PT50 Positrack loader into a precision laser grading machine. It now delivers the performance of much larger grading machines with the agility and manoeuvrability of a skid steer, as Howard Shanks reports. 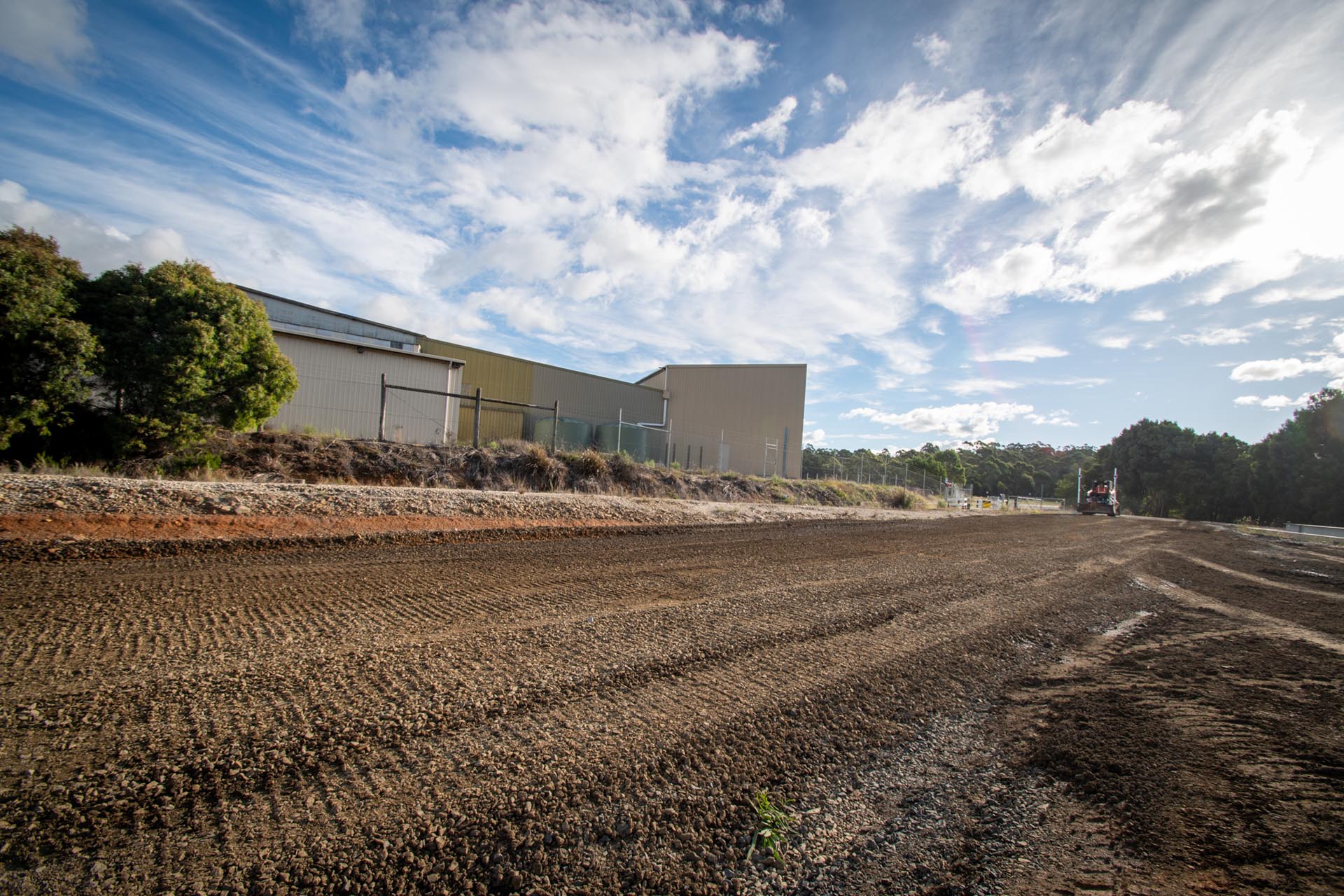 ‘New infrastructure to lift economy’… It’s a sentiment brandished repeatedly from respective governments as the country came to grips with the harsh months of 2020 and the ‘New Normal’. For most everyday Australians, these buzzwords mean little. Sure, they might make great newspaper headlines. But in reality, however, these terms are primarily considered nothing more than ambiguous words.

Whatever the preferred current favourable term, the recent funding injection into infrastructure has driven a considerable increase in construction projects. The much needed economic boost is seeing small to medium-sized contractors like the Otta Group working harder than ever. 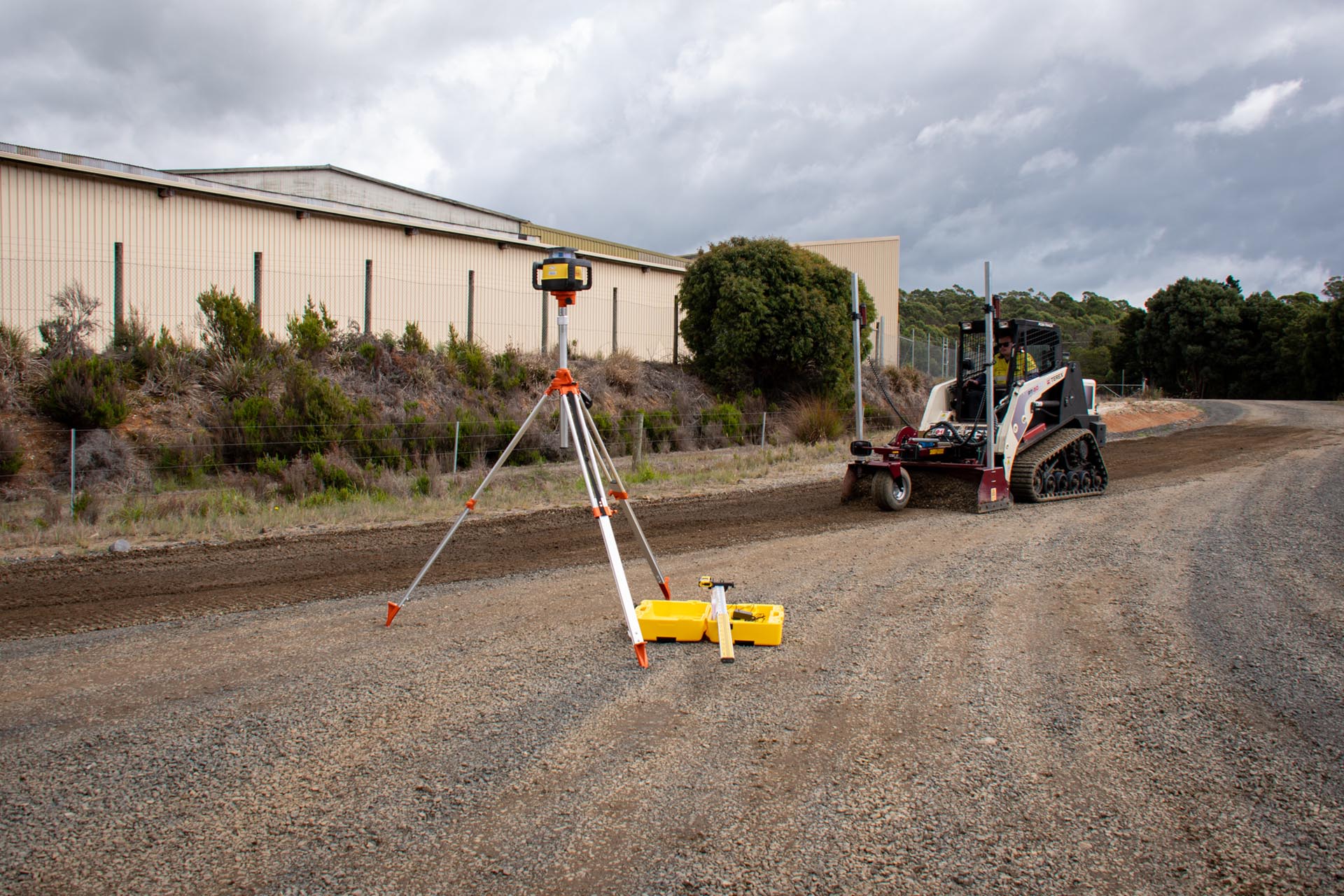 Sharpgrade teamed up with Leica Geosystems products from the UK to supply their Leica iCON machine control systems.

Like many entrepreneurs, Graeme started small, with a bobcat and a little tipper. His attention to detail and going the extra mile for his customers saw demand for his services grow. He hand pick’s his staff to ensure they foster his same work ethics. The Otta Group’s core values encourage individuals to commit to day-to-day business with constant improvement. It is primarily due to Graeme’s strong leadership that drives the integrity of these commitments.

“About 50 per cent of our clients annually are repeat customers, including landscapers, developers, builders and local councils,” Graeme explained.

“Certainly, COVID-19 has been hard on all of us. But I have to say; lately, we’ve been running off our feet.”

“The last five years, we’ve grown every single year, and while growth in 2020 was slow, we anticipate 2021 will be another strong year for us. We are continuously looking to grow and look at expanding our fleet in the future.”

Graeme attributes increased customer demand as the driving force behind his new Sharpgrade box blade leveller’s acquisition. “We were searching for a tool that would not only add efficiency to our road and site preparation projects but improve the accuracy and quality at the same time.”

“One of the biggest advantages of a box blade leveller over the traditional smudge bar is its accuracy,” Graeme explained. “With this Sharpgrade, the blade is independent of the machine, and the front wheel stabilises the blade and prevents it from ‘digging in’ when the loader travels through a depression. Another advantage of this style leveller is it can cut, grade, or spread product to fine tolerances over wide areas.”

Luke started his training session explaining the Sharpgrade unit’s features that set it apart from the competition. 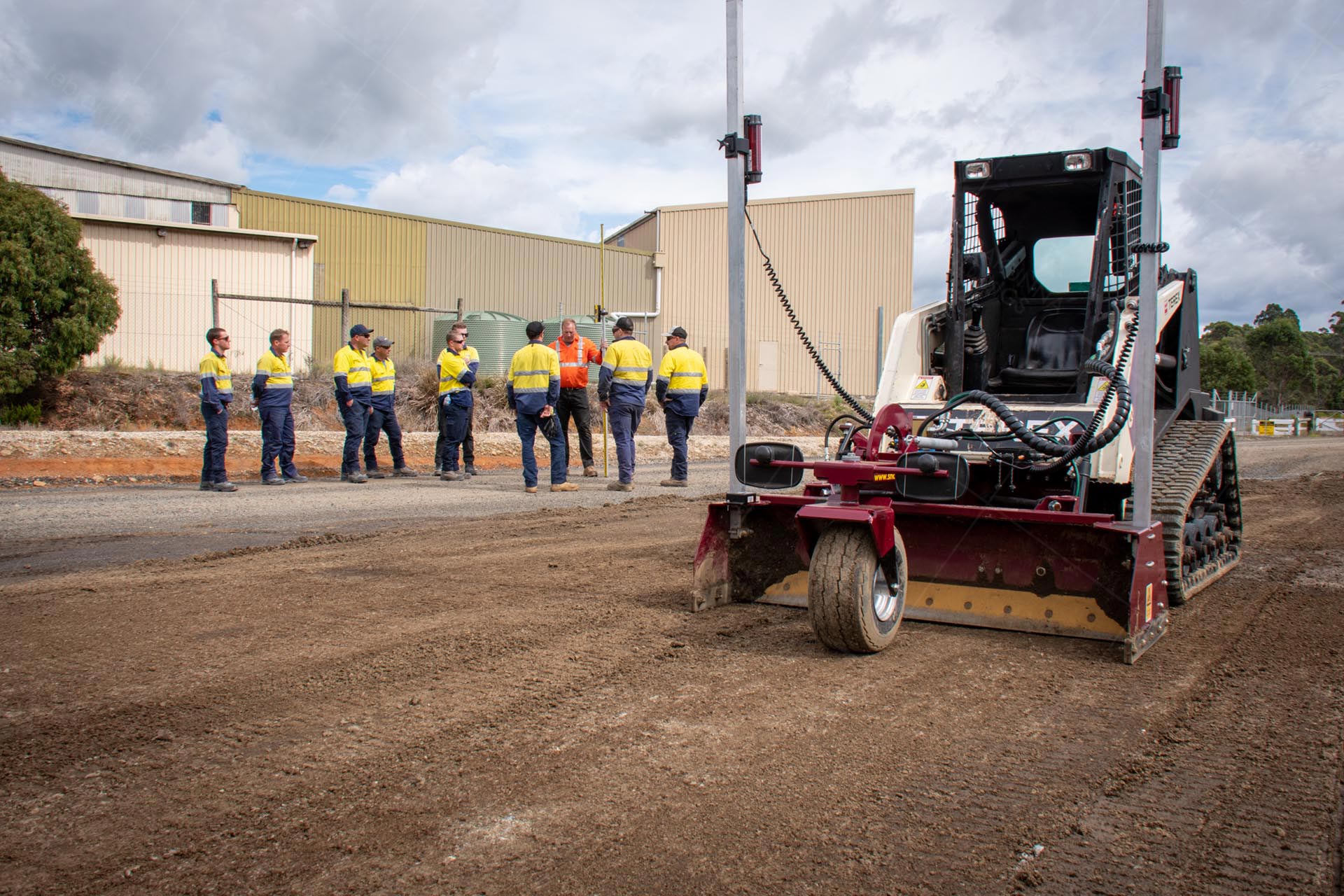 “Upfront, you see there are two large parabolic mirrors, so you can see what the blade is cutting,” Luke began. “But importantly, it enables you to see the outer edges of the box, and this is critical when you are working next to a concrete curb, for instance. It will enable you to get right up next to the curb without damaging the concrete.”

“The retractable wheel is spring-loaded, so it is easy to lift,” Luke explained. “If you’re working up towards the wall of a building or curb, you can lift the wheel when you get near the wall, and it will enable you to grade almost to the wall because the wheel sits well behind the blade when retracted. Furthermore, when the wheel is in the raised position, you comfortably use the Sharpgrade as a bulldozer. For instance, you can push through a stockpile of material without the wheels getting in the way.”

“Now, take a look at how the box attaches to the chassis,” Luke continued. “It is attached with Sharpgrade’s unique Quad-rod linkage that fixes the blade with sealed for life zero clearance spherical mounts at either end. There are two linkages at the top and two at the bottom. These linkages control the vertical and pivot movement of the blade. This system allows the blade to pivot 10 degrees in either direction.” 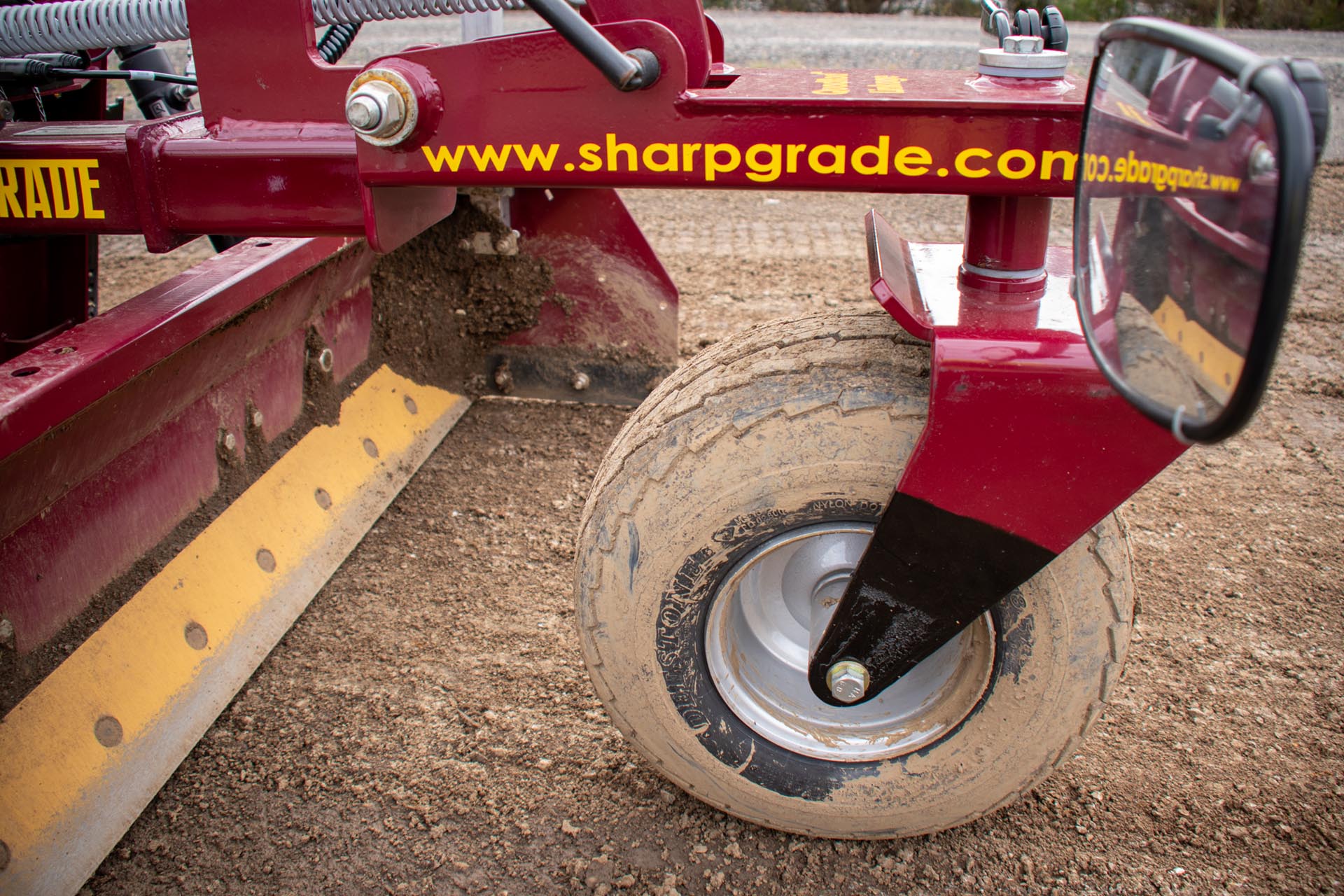 There are two large parabolic mirrors, and the retractable wheel is spring-loaded.

“The zero clearance spherical mounts eliminate any slop between the blade and chassis, which enables the Sharpgrade to grade very-hard materials with great accuracy because there is no flex in the link.”

And almost like a TV infomercial, “But wait, there’s more”. The linkages are mounted outboard and high up on the blade to keep them out of the dirt. Because the rear of the box-blade is entirely open, it can carry almost three-quarters of a cubic meter of material without spilling when back blading. Which certainly adds to the machine’s efficiency.

At the rear of the Sharpgrade chassis is the adjustable hitch plate. According to Luke, the initial set up is critical to ensure the machine’s accuracy, mainly because the Sharpgrade has two blades. One for forward and another one for reverse grading. “If the Sharpgrade attachment is not mounted level with the wheels of the machine, then the front blade will trim at a different level to the rear blade,” Luke added. 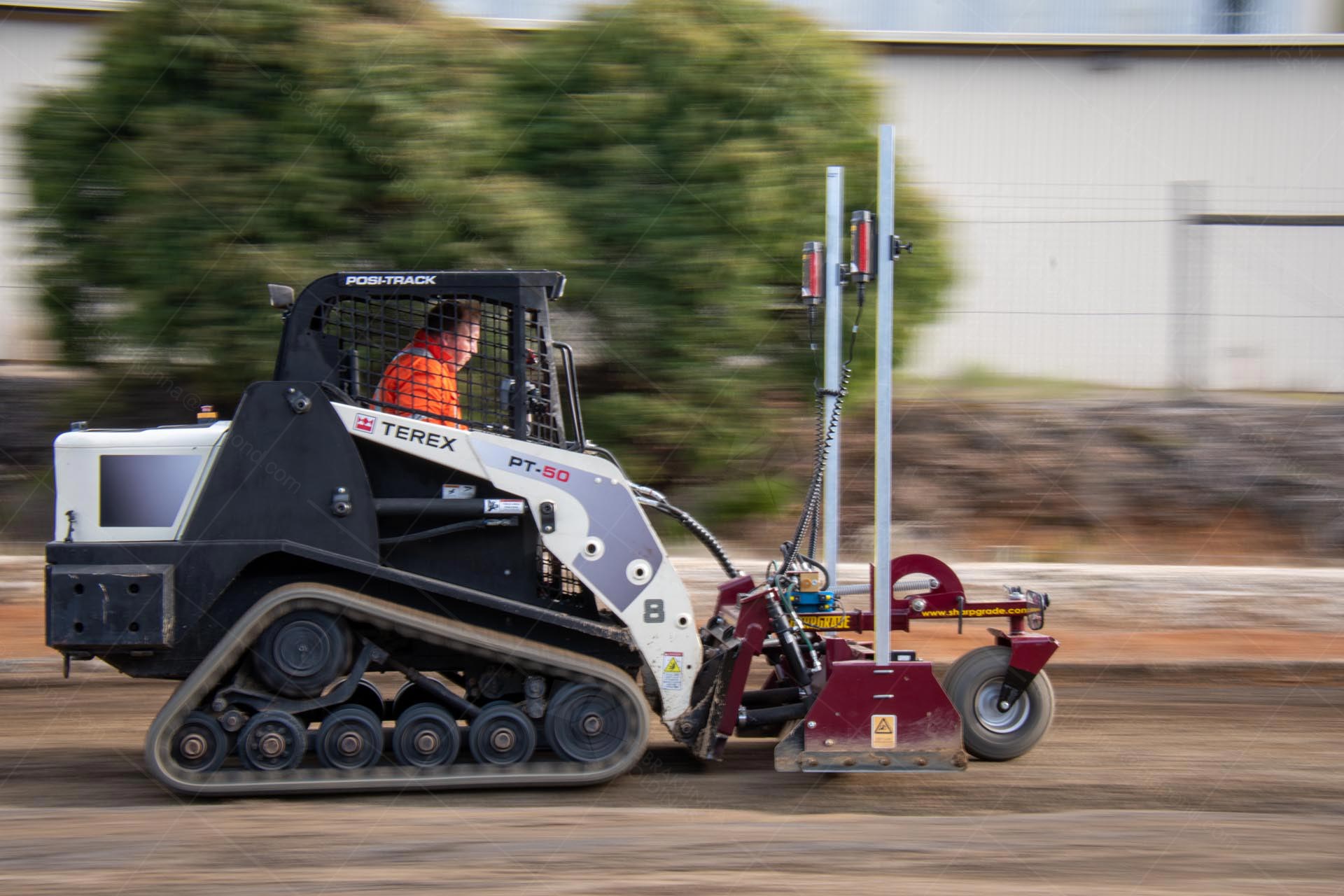 “The other critical area we need to get right when completing the initial set up is to ensure that machine’s boom is resting on the bump stop when zeroing the Sharpgrade. When the boom is on, the machine’s bump stops; it becomes rigid with the skid-steer machine, and because the Sharpgrade chassis is solidly attached to the mounting plate, the Sharpgrade and Positrack are now one rigid device. The Sharpgrade’s hydraulics and quad-rod linkage now work seamlessly and accurately control the movement of the blade.”

However, once the initial set up is completed, connecting the Sharpblade to the machine in future only takes a matter of minutes. The operator only needs to place the boom down on the bump stops, rest the front wheel on the ground and the Shargrade is now level ready for work.

“By the way, the fact that the Positrack’s boom is resting on the stops when we’re using the Sharpgrade greatly reduces the wear on all the machine arm’s pins and bushes,” Graeme added.

“Sure, it’s early days yet for our Sharpgrade,” Graeme said. “But take a quick look at how swiftly and easy it trimmed up this piece of roadway. I’m certainly impressed. Its diary is already starting to fill quickly, so I’m confident it will be a great asset to our business and deliver the efficiency we were chasing.” 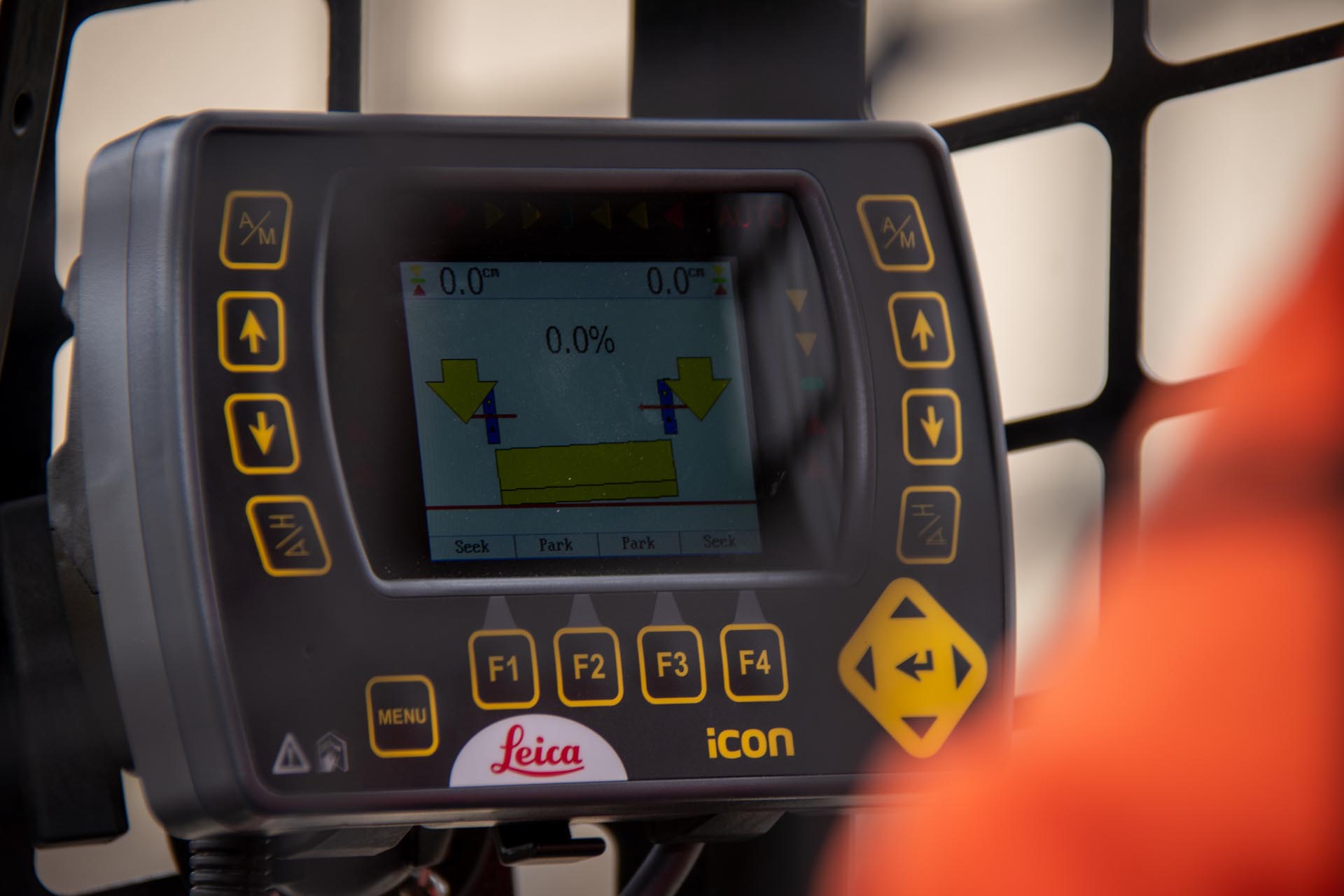 Editor’s Note: Check back soon to see our feature on how to operate the Sharpgrade and Leica iCON machine control systems.