It would be considered more than an ambitious project, even by today’s standards, to bolt a 2500 horsepower V8 Mack engine into a truck chassis with visions of running it down the quarter-mile in 11 seconds or less. Nevertheless, back in the mid-nineties, that’s what we set out to do. The following is a recount of what we called Project Thunderbolt … 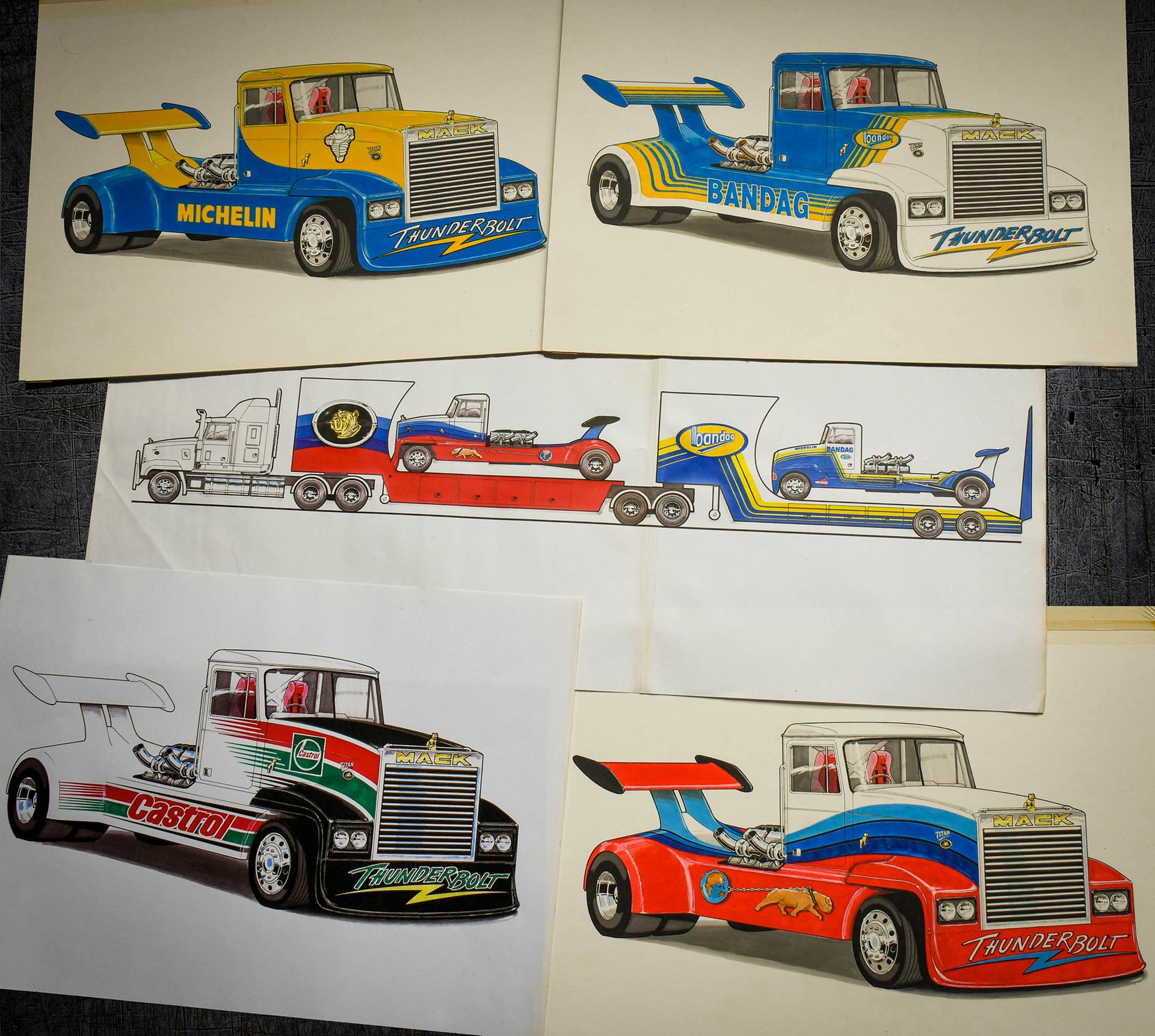 Incongruously, my wife does not share the same enthusiastic passion that I have for trucks nor the industry. Consequently, it is with some irony that if it weren’t for her recent persistence that I clean out the storeroom as I’d been promising for the past few years, I would not have stumbled across the two and bit decade-old files on Project Thunderbolt.

How it all started … back in the early nineties, I was working for Truckin’ Life as the Technical and Editor at Large. One of my tasks involved covering the truck racing circuit. Wherefore, I’d become friends with well know truck racers Frank and Charlie Gaffiero. You might remember their famous Kenworth T400′ Bandag Bullet’ with the 2-V8 92-Series Detroit Diesel engines. 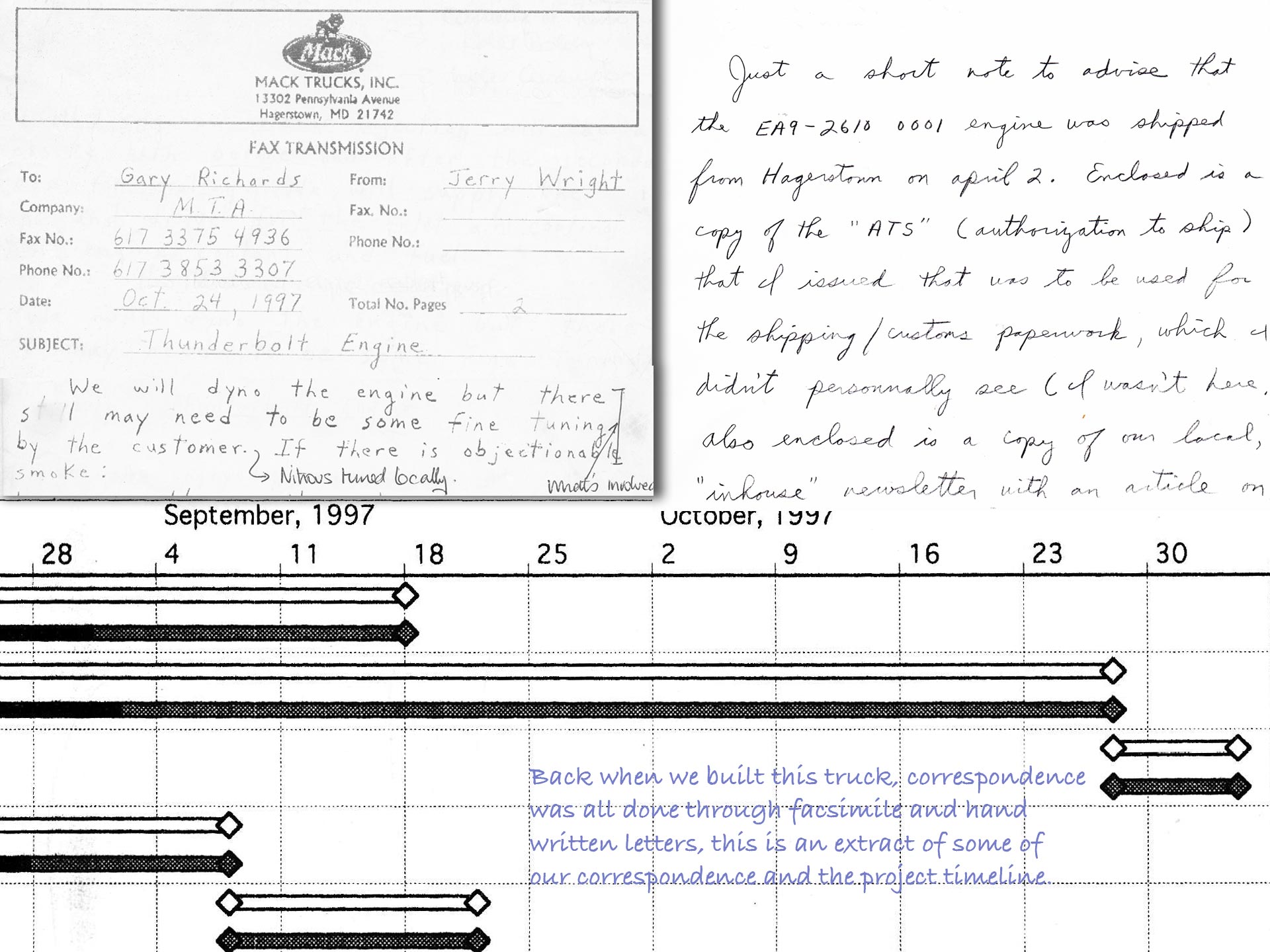 Some of our correspondence between MTA and MTI and our project timeline.

One night after a drag meeting in Townsville, I suggested to Frank that if the ‘Bandag Bullet’ had a challenger, something to race down the quarter-mile, it would make for a bigger drag show and ultimately more publicity. Our concept drew on the rivalry of Ford versus Holden that had thrilled touring car fans for years.

If you’re into trucks, then you either love your Kenworth or Mack. There is no in-between!

Now we had the idea. We knew what truck we wanted. It was now a matter of putting it all into motion, and that was the start of the late nights.

By early 1996 we’d created a sound strategy. The discussions we were having with promotors and potential sponsors and suppliers were proving promising. Furthermore, the positive feedback we received from Mack during preliminary discussions encouraged us to proceed with a formal proposal.

By the time we’d submitted our formal proposal to Mack at a meeting with the then Marketing Manager of MTA, Gary Richards, Project Thunderbolt had evolved into more than just a drag truck. 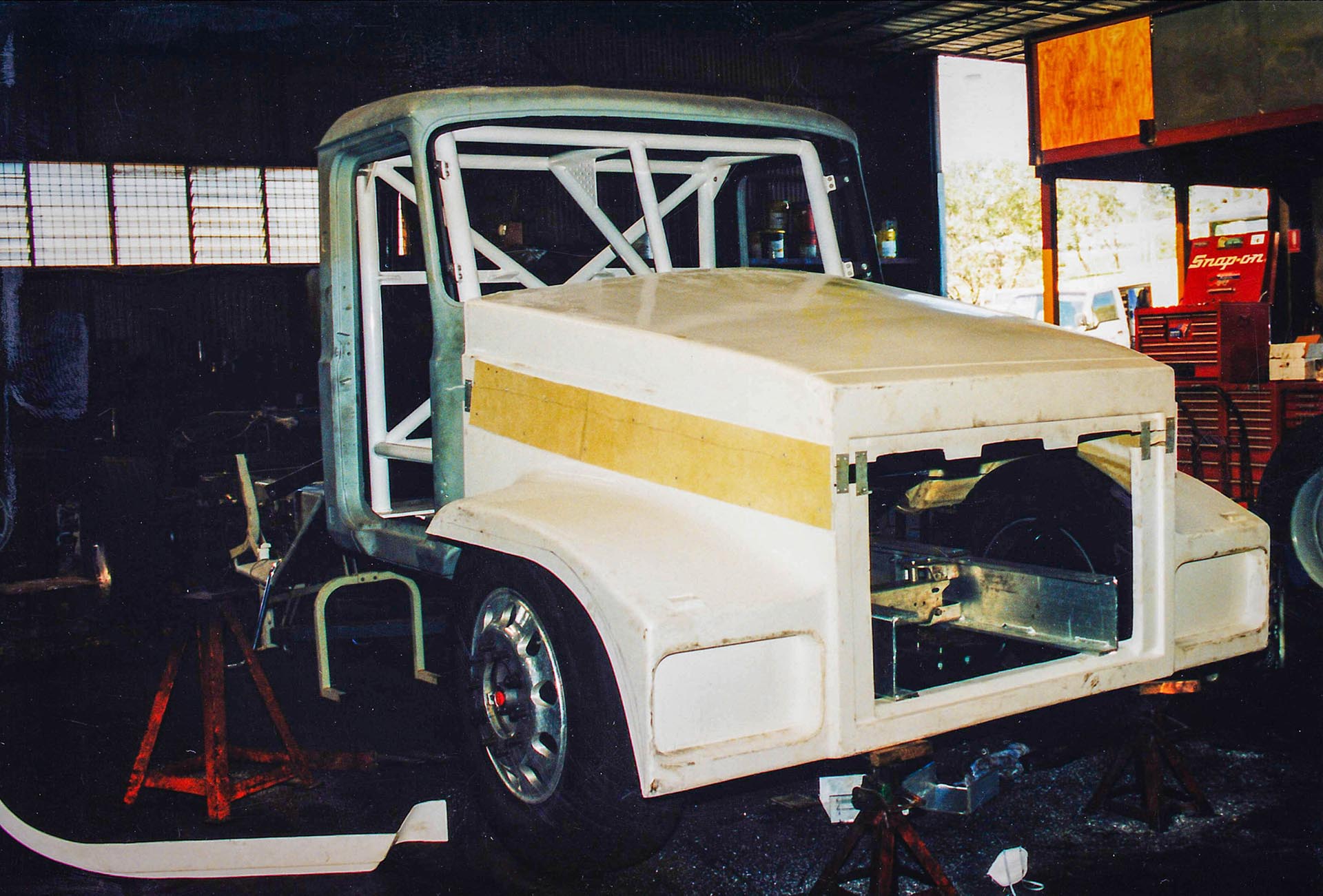 The subject line on the MTA Internal Memorandum dated 20/12/1996 read; Unique Promotional Opportunity. It went on to read, “the basis of the proposal is to develop and exhibit a special display/demonstration truck …”

Time for a quick bit of Aussie trucking history here. Mack introduced the Super-Liner in the early eighties powered by their E9 V8 with a power output from 400 to 500 horsepower. These trucks and their engines quickly developed a reputation for producing inexorable power and steadfast reliability. The Mack E9 engine became King in the heavy haulage market segment. By the mid-nineties, electronics had found their way into Mack’s V8 as the drive to produce more power persisted. With the introduction of electronics and horsepower boost, the V8 received new nomenclature, now known as the EA9. Incidentally, the “A” in the designation indicated an Australian engine.

At the time, most truck manufactures could only supply engines up to 550 horsepower and 1850 lb-ft torque. Even Caterpillar’s big C16 just made 575 horsepower. 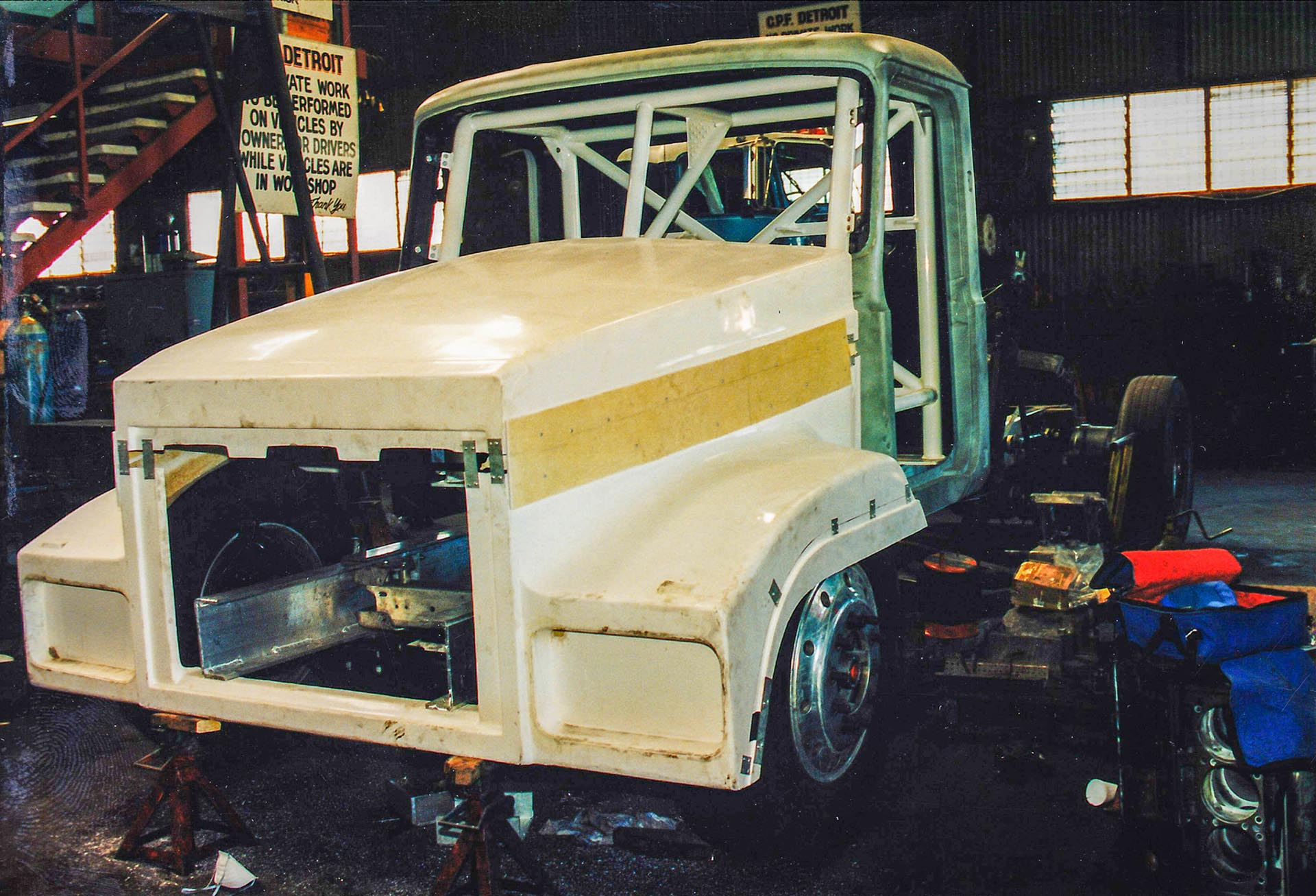 Mack Trucks Australia had propelled their new EA9 beyond the 600 plus horsepower frontier. It even boasted what, for the time, was a mind-blowing 2050 lb-ft torque. This new tenacious V8 engine aimed squarely at heavy haulage, and road train applications indeed turned heads. When those 610HP EA9 engines were cracking, they cracked. And operators that had the good ones loved them. But sadly, not all of them enjoyed the longevity of their predecessors.

As a result, the idea of reliably squeezing a high horsepower out of the Mack V8 excited Gary Richards. He was keen to get involved and believed the primary objective should promote Mack’s engine power and reliability. 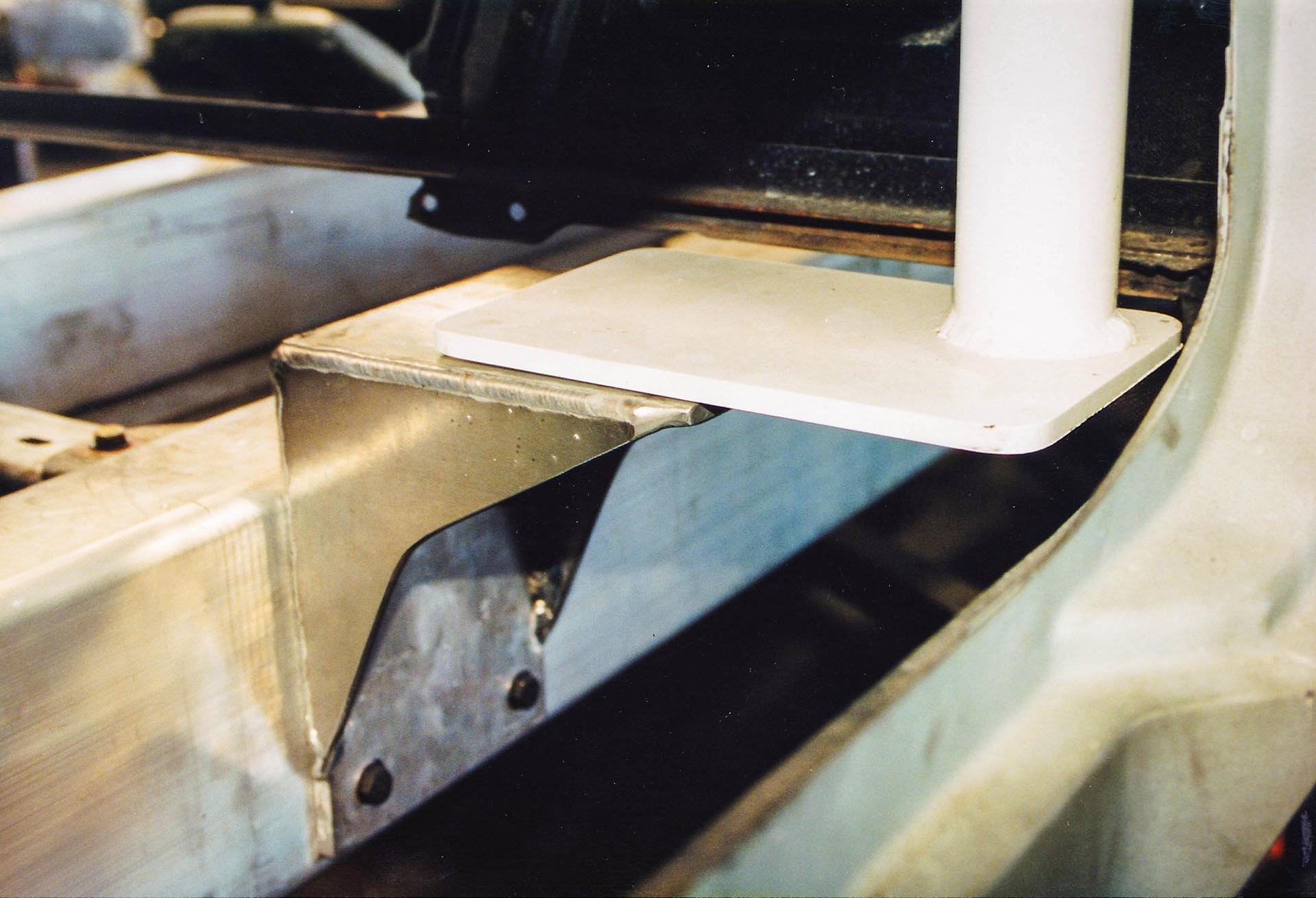 Building the roll cage at Bocar

By April 1997, we’d received written confirmation of MTA’s sponsorship. The chassis build commenced in Frank and Charlie’s Archerfield workshop. By late September, we’d secured a cabin that went to Gold Coast bullbar manufacturer Bocar who offered to construct a roll cage to meet the ANDRA specifications.

Meantime, the race was now on to get an EA9 engine to thump out some serious horsepower. However, thanks to Gary’s enthusiasm and a couple of strategically placed phone calls he made to the USA. A few chaps from Mack Trucks International (MTI) agreed to assist with the project, and the engine solution arrived. Between Gary and his contacts at MTI, we made contact with USA National Tractor Puller Champion Ray Collins, who ran an E9-V8 powered 1984 Mack Super-Liner called the “Buckeye Bulldog” that reportedly produced over 2500 horsepower reliably. 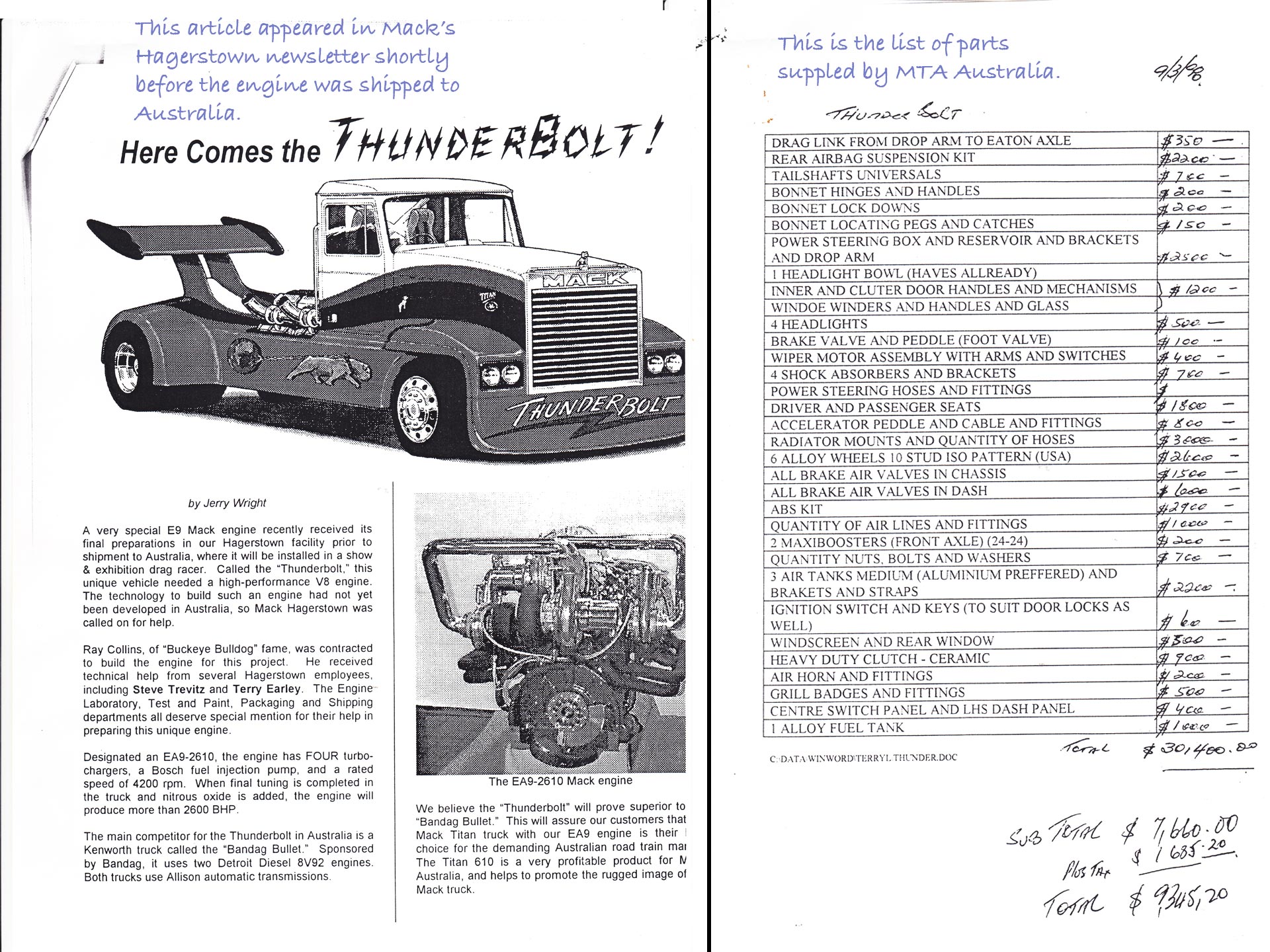 The team at Mack’s Hagerstown engine factory, which built the engines for Ray Collins, agreed to construct an engine for us similar to the champion winning model in Ray’s Super-Liner. According to a facsimile dated 01/09/1997, for an investment of $US40, they’d deliver an engine capable of 2000hp+. A month later, I received confirmation that MTA transferred the deposit to MTI for the engine build’s commencement.

Over the next few months, our fax machine received an extensive workout as correspondence went back and forth between ourselves and the US regarding engine specs. One facsimile from MTI in late October 1997 worth noting suggest the engine colour of the block should be Mack grey while the exhaust manifold treated in ‘jet hot black’ and the intake manifold ‘jet hot silver’ a proprietary baked high temperature finish. 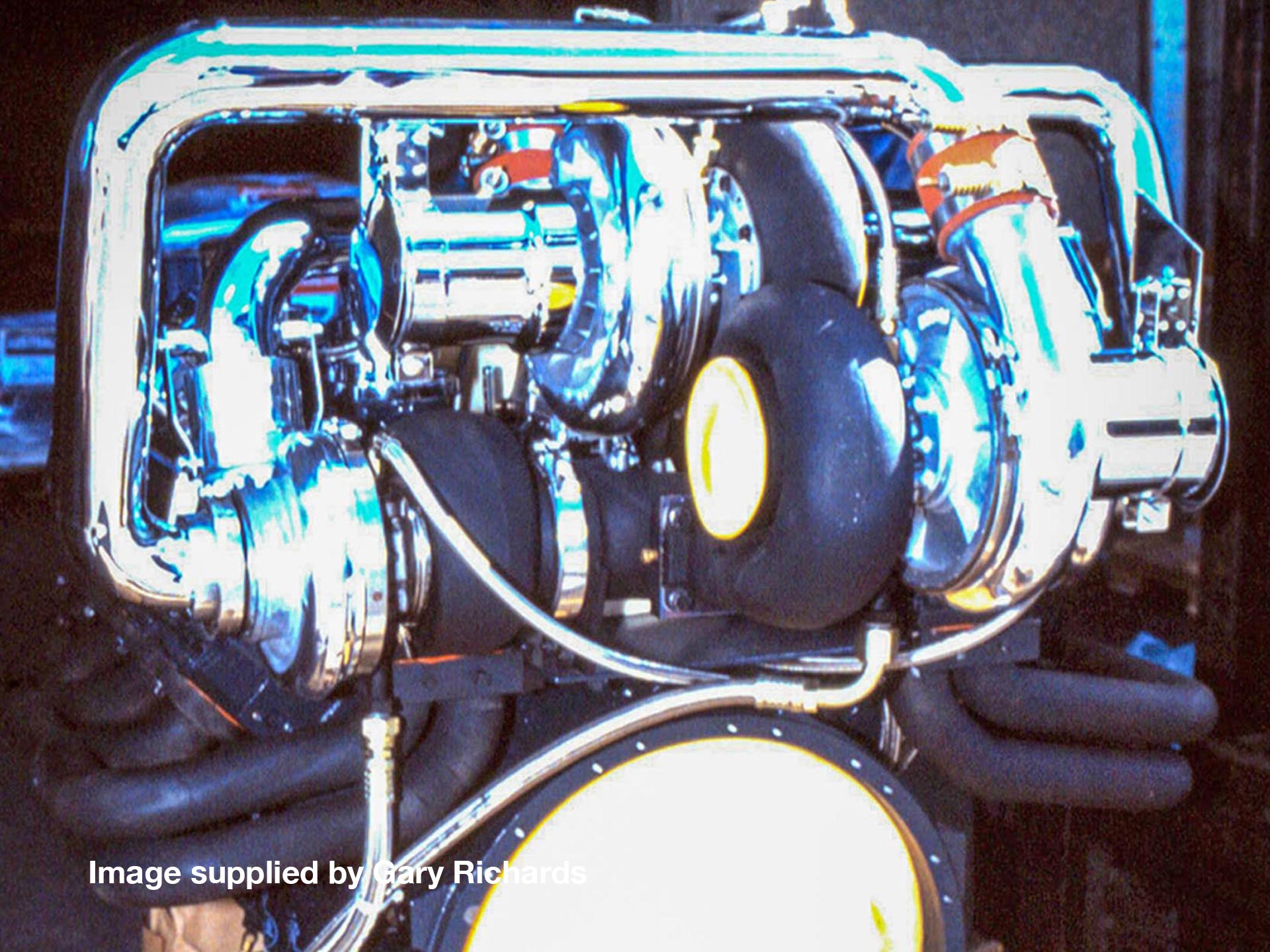 Engineer Steve Trevitz was responsible for the final engine configuration. He planned to run a two-stage turbocharging system with two primary turbos feeding two secondary turbos which feed the engine. Keeping the turbos cool is critical to reliability, especially in an engine producing this amount of horsepower. It was necessary to inject water both before and after the secondary turbo, to achieve the required cooling. The addition of this water injection system meant required an additional chassis-mounted water tank.

The engine design required a staged/progressive NOX injection to achieve more than 2500 HP. In theory, the NOX would be introduced into the engine once it left the starting line to avoid unnecessary wheel spin and provide more top-end speed. Nevertheless, Steve Trevitz indicated that without nitrous use, the engine output would be better than 2000 HP. Exciting news. Gary Richards suggested the engine serial number reflect the horsepower output; subsequently, the Hagerstown team stamped EA9-2000-0001 into the block.

Because of the high engine RPM, we decided to use an auxiliary drive belt arrangement to power the air compressor. We used standard EA9-610 components with the installation of the alternator and power-steering pump. An external high-flow water pump was the preferred option to cool the engine adequately.

On the 3rd of April 1998, we received a facsimile from Jerry confirming the engine had left Mack’s Hagerstown factory bound for MTA, Brisbane headquarters.

Now, much like part-2 of this article, it was just a matter of waiting … 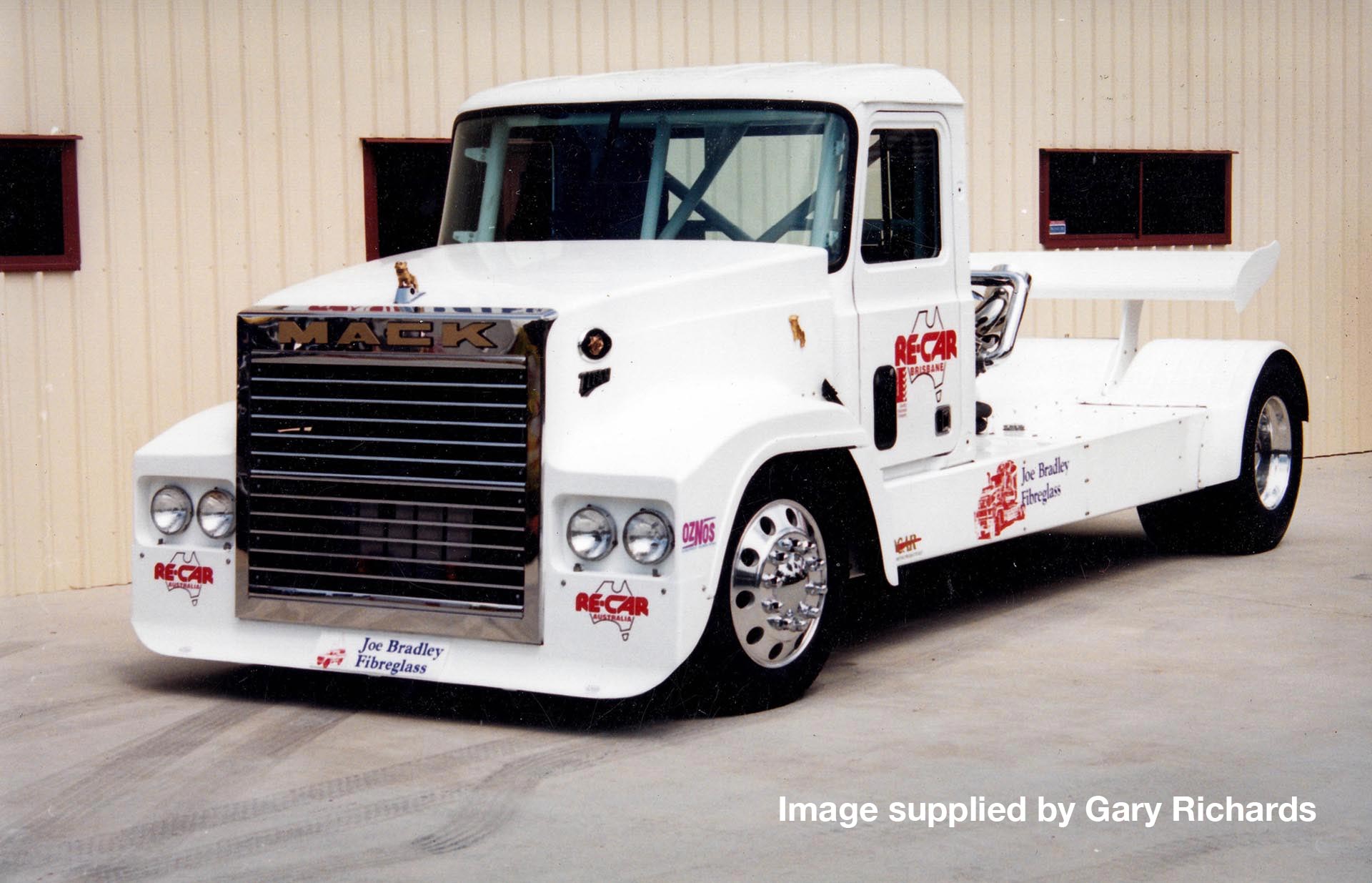 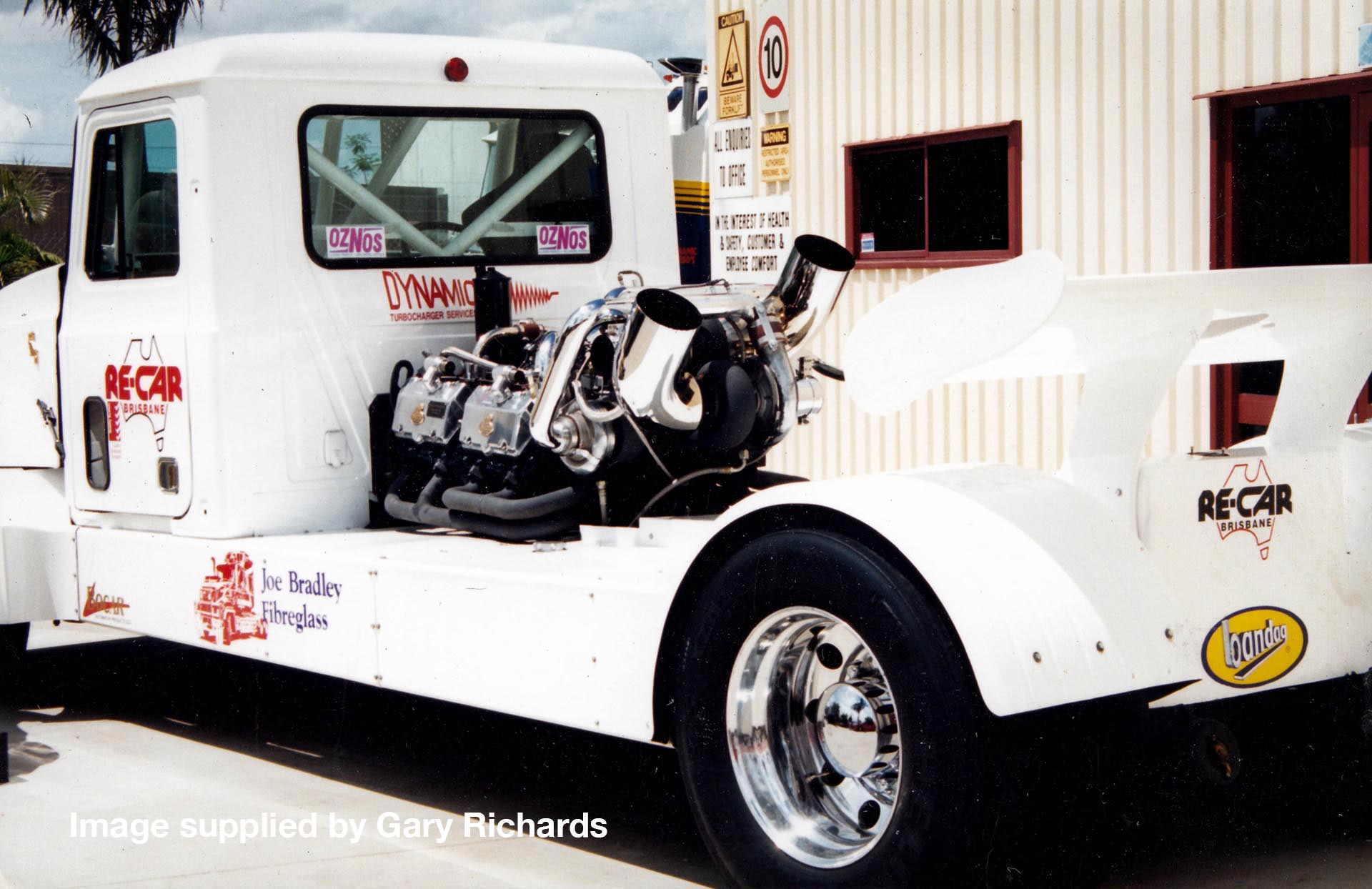