How to tilt or raise the cabin on an Isuzu truck

You are here:
ArticlesFeaturesTech Tips 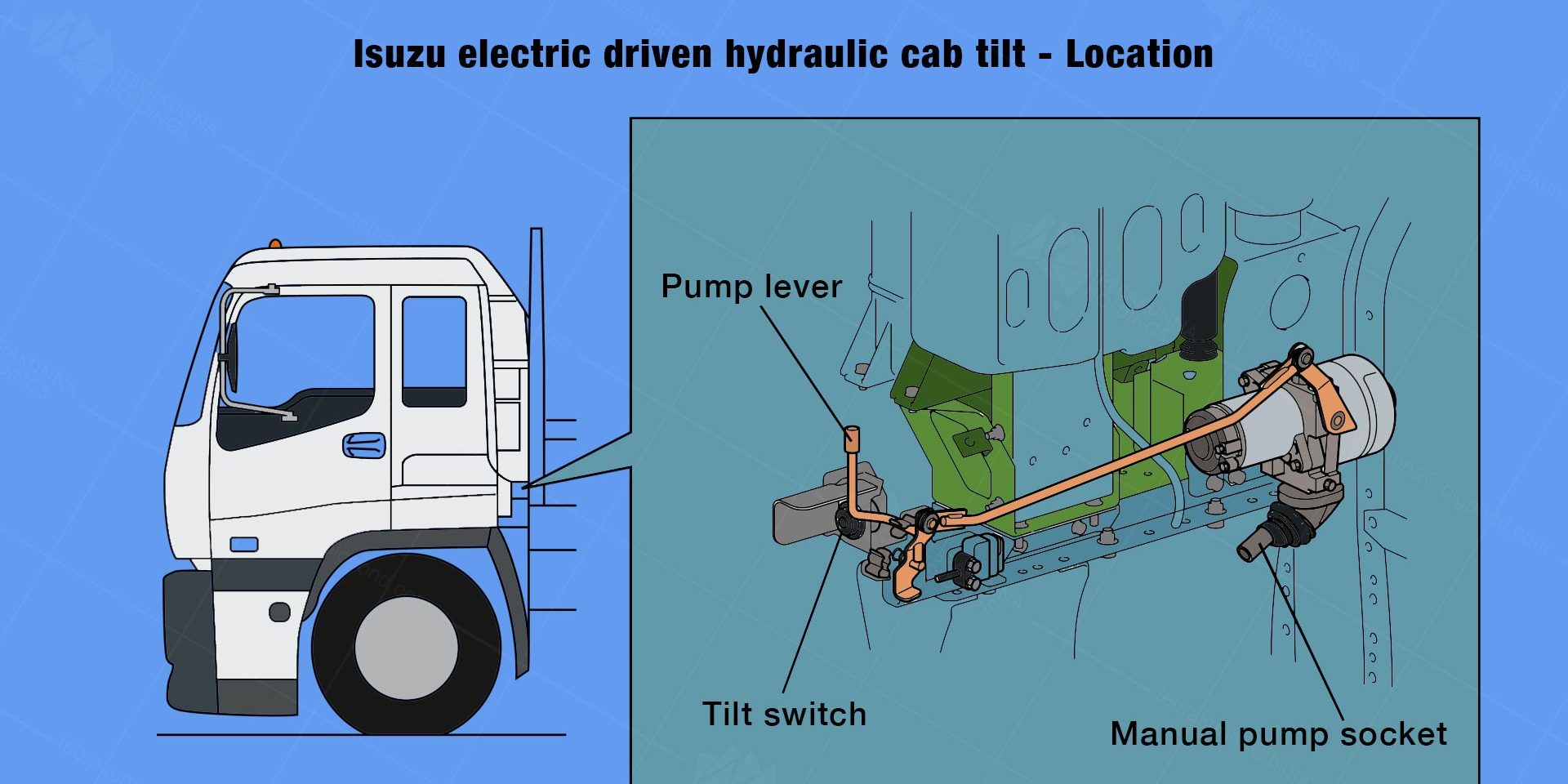 Regular maintenance and service is the key to ensuring that you get the most reliable service possible from your truck. 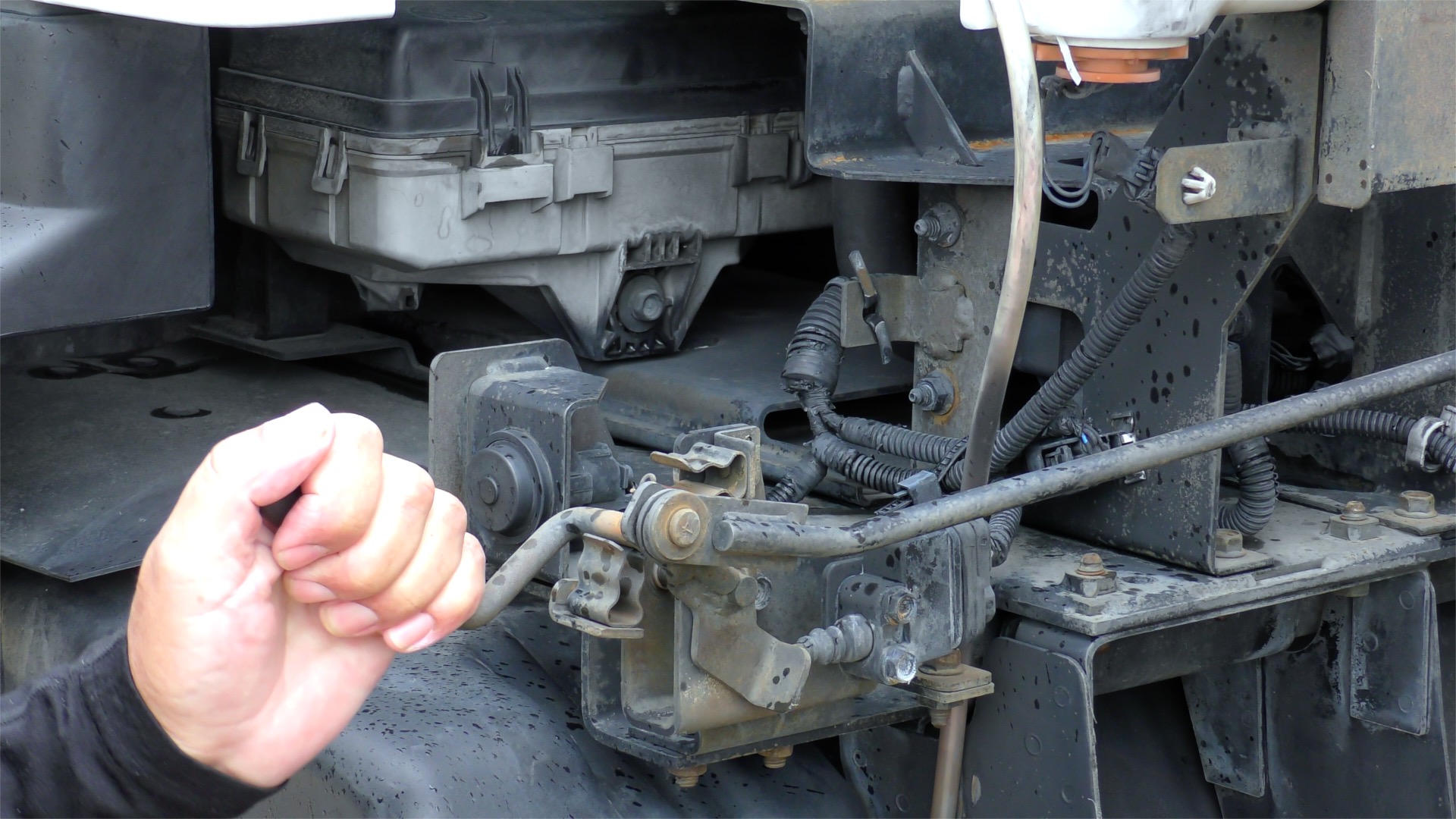 All Isuzu cabover trucks require the cabin to be raised or tilted to provide access to the engine bay when service and maintenance work is needed. Thankfully, the larger, heavy-duty Isuzu trucks have an electrically driven hydraulic cabin tilt system that makes tilting the cabin an effortless and straightforward task.

But a quick word of caution before rushing into the task. Raising or tilting a truck cabin be dangerous and cause serious injuries or death if not performed correctly.

Therefore, before titling any truck cabin, it pays to perform a few safety checks and prepare the cabin thoroughly before commencing the raising process.

Preparation for tilting the cabin

Meantime, pay particular attention to areas around the muffler, exhaust pipe, catalytic converter and diesel particulate filter (DPF) as they will be very hot immediately after driving. Take extra care to avoid accidentally touching these while performing the cabin tilt operation. 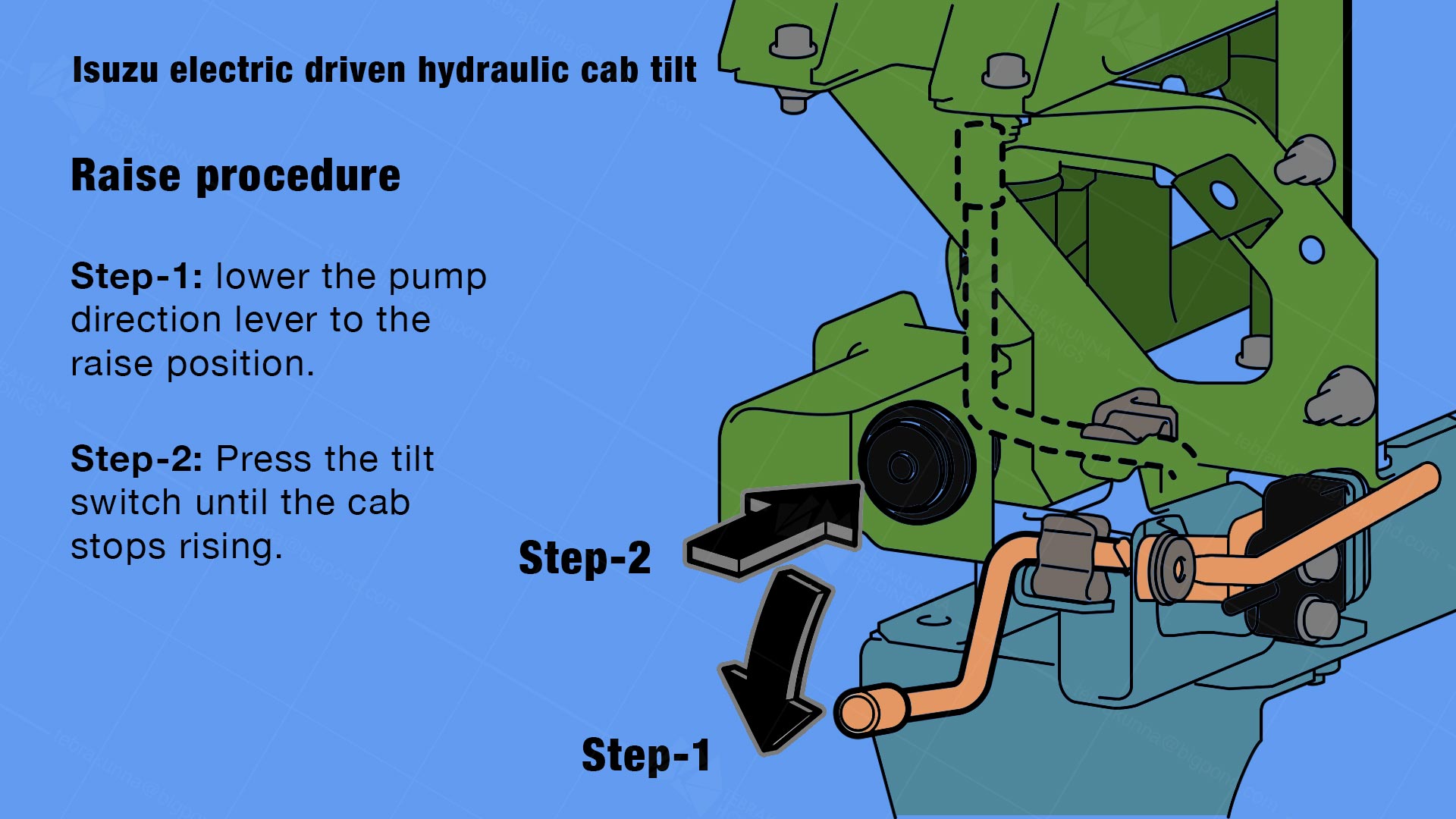 To raise or tilt the cabin up.

Check that the vehicle’s parking brake is securely applied. Place the transmission in neutral and chock the drive wheels. As an added safety feature, Isuzu only allows the electrically driven hydraulic cab tilt system to operate when the gearshift lever is in neutral.

You will need to unlock the cabin from the rear cab mounts before activating the lift pump. The cabin tilt locking levers are located at the rear on the left-hand side of the cabin. First, to unlock the cabin, pull the small safety release lever outwards, then while still holding this lever, pull downwards on the main locking lever till it rests on the bottom stopper to release the cabin lock.

Step-1: Pull the pump direction lever downwards into the raise position. On some models, a buzzer may sound to indicate the raise system is active.

Step-2: Press the hydraulic pump’s button to turn on the pump. Keep pressing the button until the cabin has fully raised. When the cabin has fully raised on models with the buzzer fitted, the buzzer will stop to indicate the cabin raising cycle is complete. You mustn’t stop the cabin tilting process mid-way except in an emergency. Continually interrupted tilting will cause the electrically driven hydraulic cabin tilt mechanism to break down prematurely. 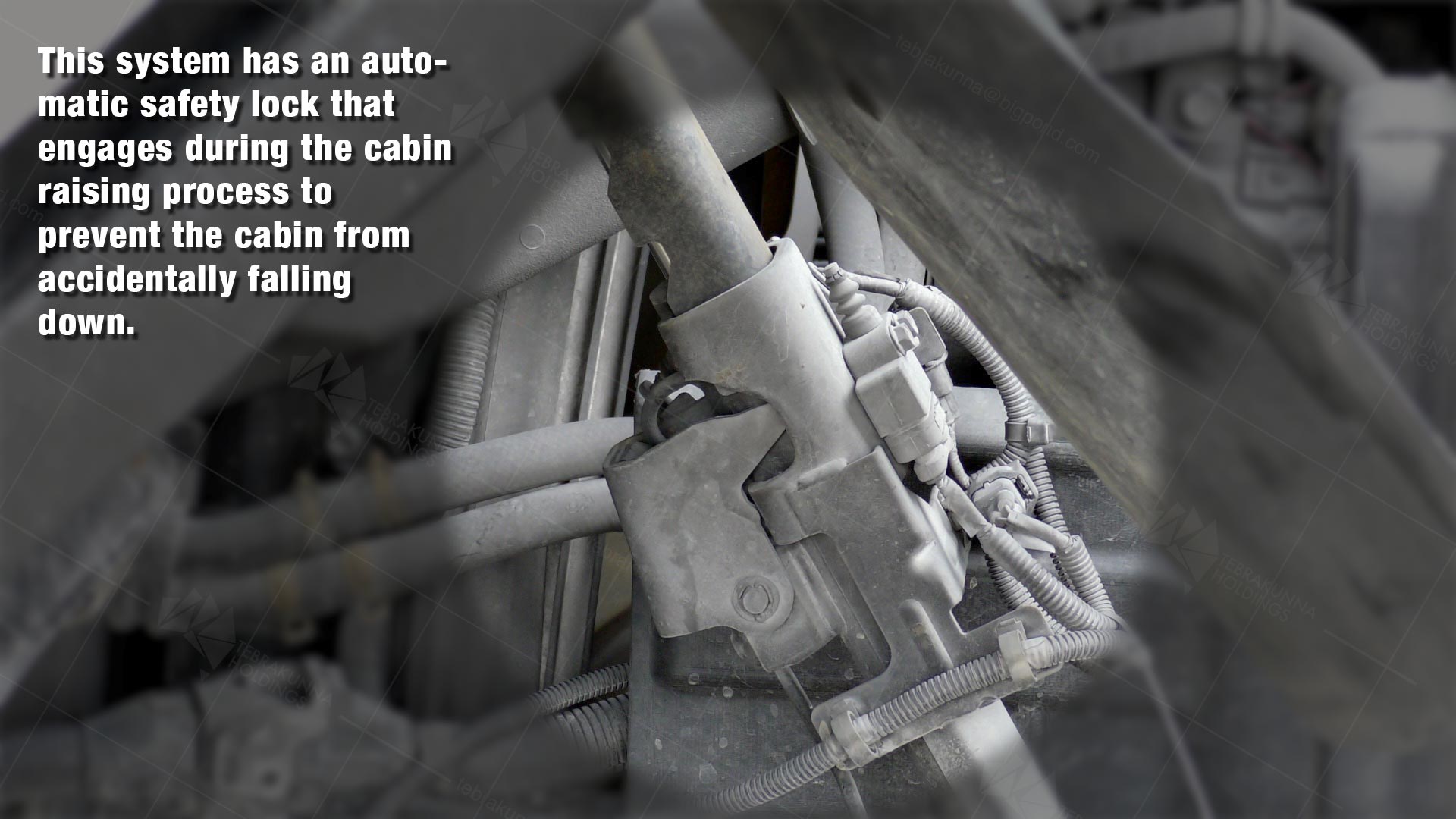 For safety’s sake, never get under a cab that has stopped mid-way during tilting as the cabin’s safety lock will not have engaged, and the cab may drop down suddenly. Furthermore, make sure that no part of your body is beneath the cab during the raising process. You may get caught under the cab if it inadvertently drops unexpectedly.

This system has an automatic safety lock that engages during the cabin raising process to prevent the cabin from accidentally falling down. This lock automatically releases when the pump’s direction lever moves into the lower position and the pump’s start button pushed in. 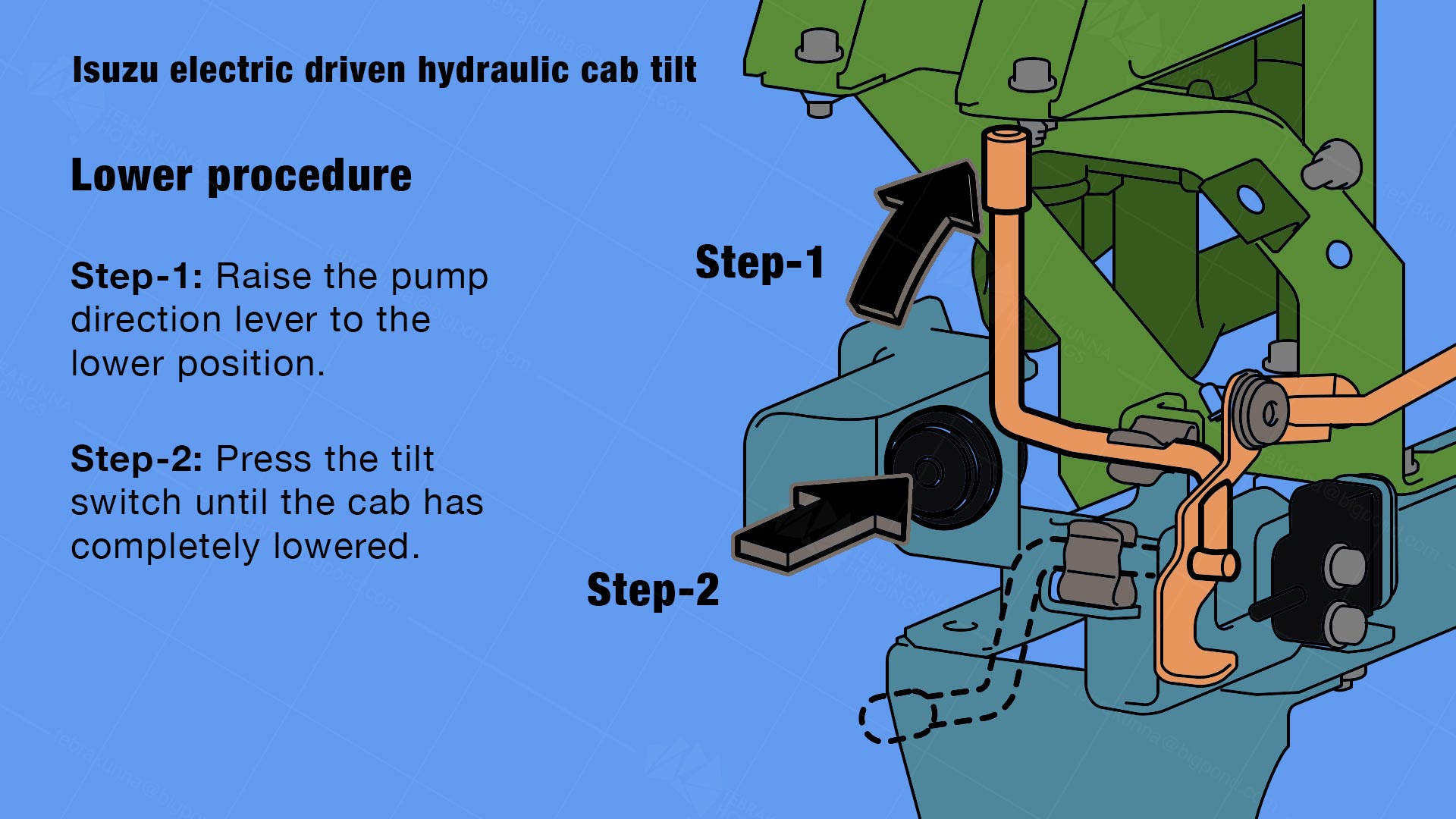 To lower the cabin

Step-1: Lift the pump direction lever upwards into the lower or driving position. Again, on vehicles fitted with a buzzer, it will commence sounding.

Once the cabin is back down on the rear cabin mount, lift the main locking lever upwards till it is secure in the top stopper. Check that the secondary safety has engaged. 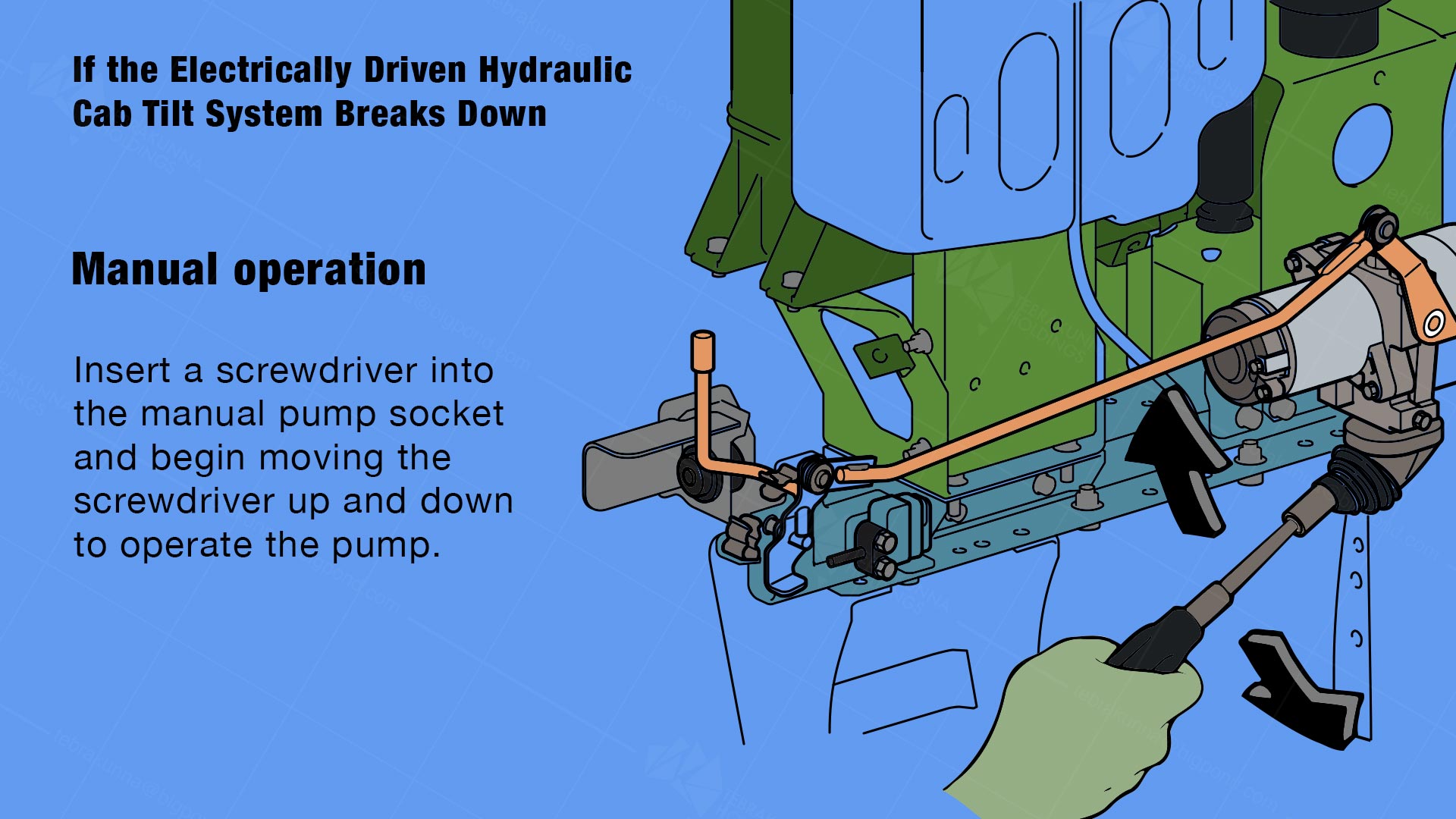 The cab tilt system will not operate when the battery is dead or the tilt motor or pump is faulty. However, if any of these conditions persist, you can still raise or lower the cab manually.

To operate the pump manually, shift the pump direction lever into the desired position, raise or lower. Then insert a bar into the manual pump socket and commence pumping the cabin jack with an up and down motion until the cabin is either fully raised or lowered.