Kenworth T610SAR makes life a little easier out on the road.

This special application engineered Kenworth T610SAR is making the road ahead a lot easier for Tas Road Express operator, Daniel White. The past decade has not been an easy one for him, rather it has been a long tough haul on the road to recovery, and being able to climb back behind the wheel to do the job he’s always dreamed of doing. 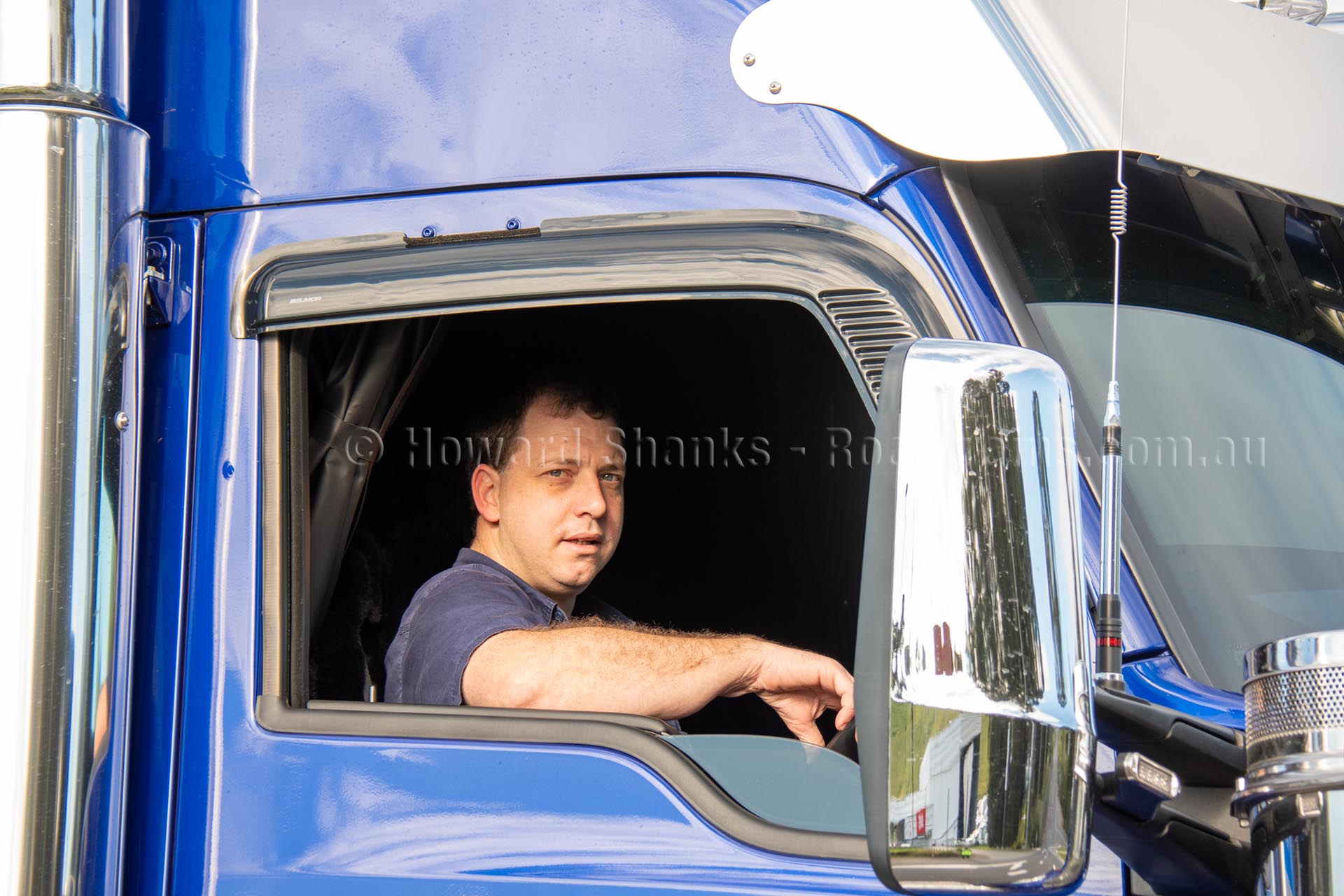 Daniel While behind the wheel of his Kenworth T610SAR

This is an inspirational story of one man’s determination to overcome every challenge and obstacle thrown at him to achieve his goal.

Daniel is the second generation in the successful Tas Road Express family transport business. Like many prosperous trucking companies, Tas Road Express, owe much of its success to its founders for the long tireless hours, sound business practices and good old fashion service they provided. These were work ethics and principals that Daniel’s father Andrew instilled into him at an early age. Principals that demand quality with no compromise on safety or service. It’s these high standards of service that they provide to their customers that make them stand out from the crowd. It’s also the same level of service they expect from their suppliers too.

The White family’s relationship with Kenworth Trucks goes back many years. According to Daniel, the ability of Kenworth Australia to customise their trucks to suit his very specific needs went a long way to making his life a lot easier. “Kenworth Trucks and the team at CJD Equipment here in Tasmania have been more than accommodating, flexible and extremely helpful in setting up this T610SAR.” 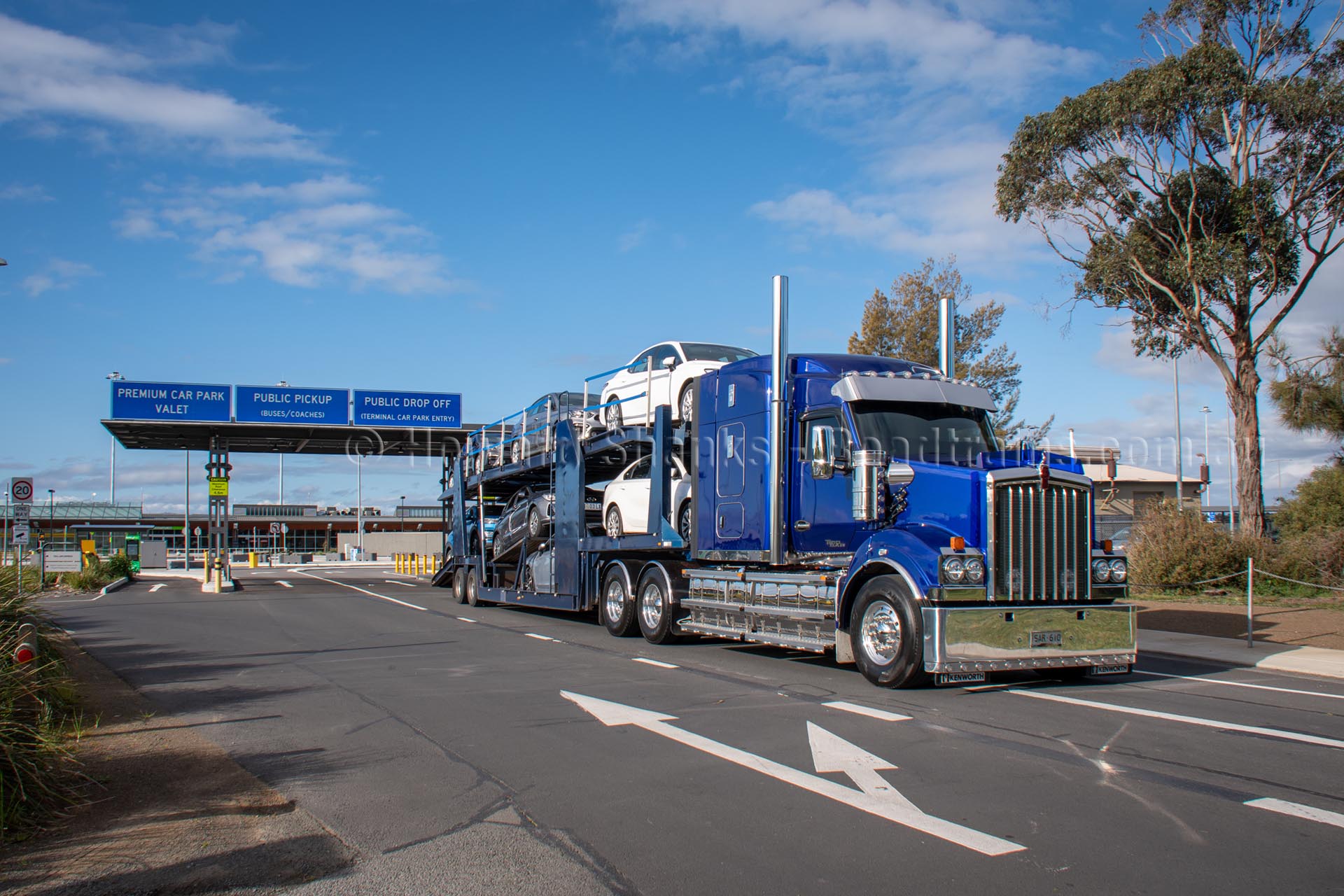 Daniel’s trucking career came to an abrupt stop back in January 2009, when he was involved in a serious truck accident on the Lyell Highway near the notorious Mount Arrowsmith on Tasmania’s rugged west coast that cost him the use of his left arm.

“It was Saturday evening,” Daniel recalled. “I thought I’d join my mate, Tim Bennett, on his run from Hobart up to Strahan with a load of bulker bags of fish food. Usually, you’d get to New Norfolk and tighten the straps then you wouldn’t need to touch them again for the rest of the journey. But this particular night, the bags just wouldn’t settle. We got to Ouse and tightened them up a bit more, then again at Tarraleah and then at the top of Mount Arrowsmith tightened them up for the fourth time.” 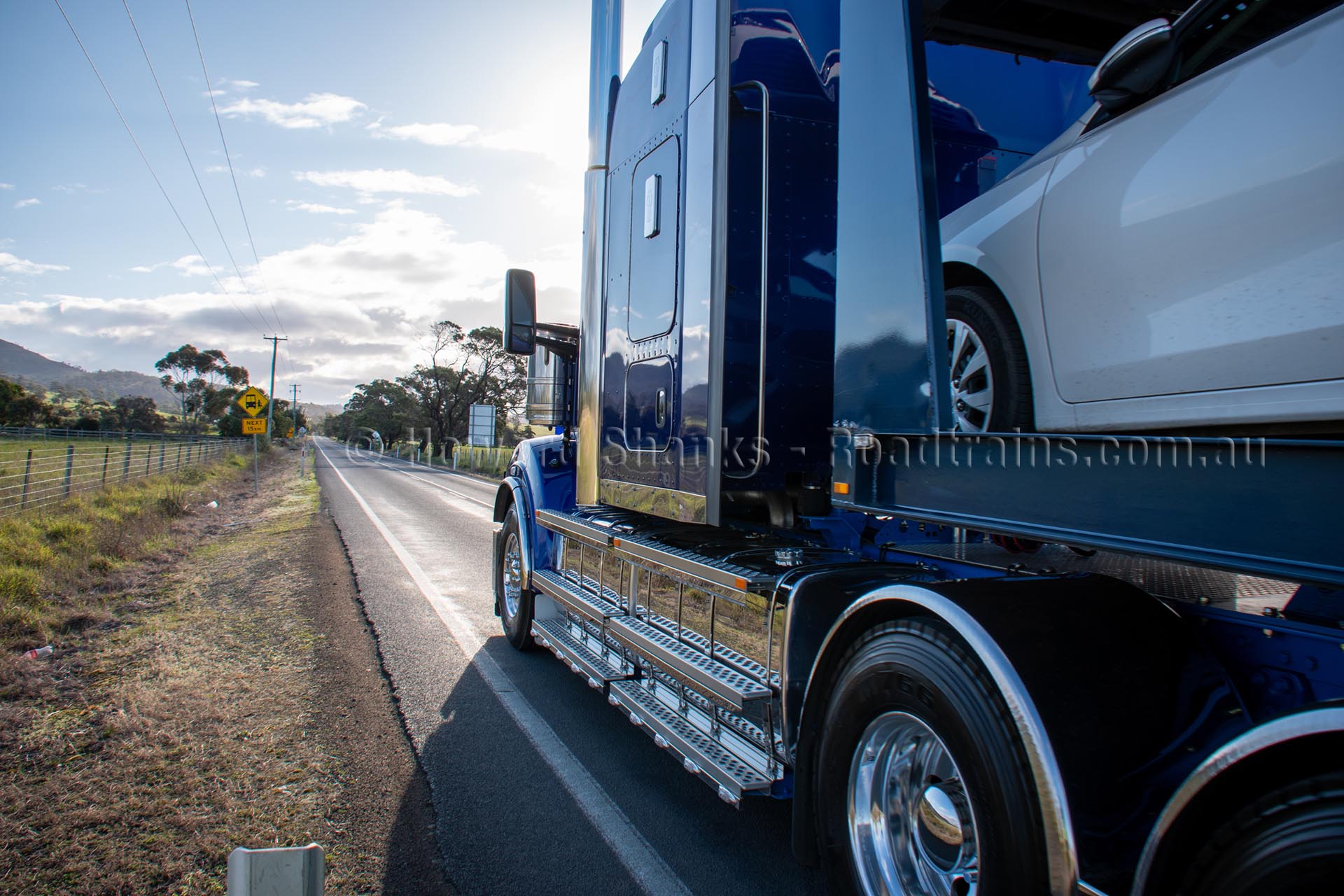 Unbeknown to Daniel and his mate, one of the bottom bags had split which was causing the load to move. And, almost word for word, straight from of Joy McKean’s famous ‘Lights on the Hill’ song, “The load started shiftin’ a dance” … and it was … “over the edge and down the mountainside”.

It took 12 hours to get Daniel out of the truck and helicoptered to the Royal Hobart Hospital. Twenty-four hours later he was flown to Melbourne for specialist treatment. Sadly, his mate Tim passed away.

“So began my long hard road to recovery,” Daniel recalled.

Daniel admits that he had his fair share of critics during his recovery, especially whenever he’d remark that he was going back trucking. Step one was to learn to walk again. 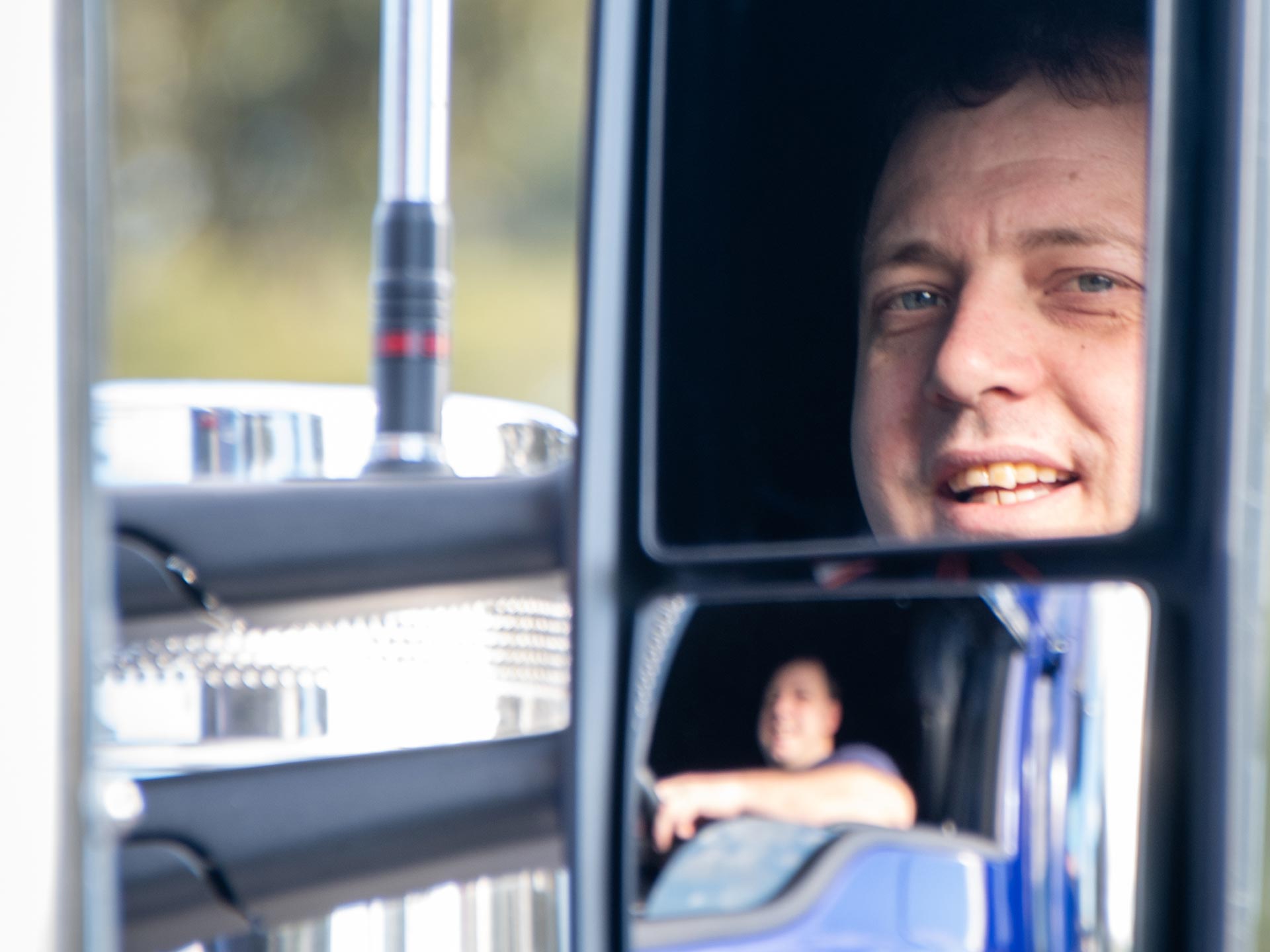 “Getting back behind the wheel of my truck was my motivation,” Daniel revealed. “That’s what made me get up every morning and take it one step at a time.”

“My licence was suspended on medical grounds,” Daniel explained. “To get my licence back I had to retake my driving test with a driving occupational therapist and a driving instructor. At the time there were no test vehicles capable of seating three occupants available in Tasmania. However, DECA in Victoria had one which meant I had to take a trip over there with the driving occupational therapist to be tested. Nothing was simple!” 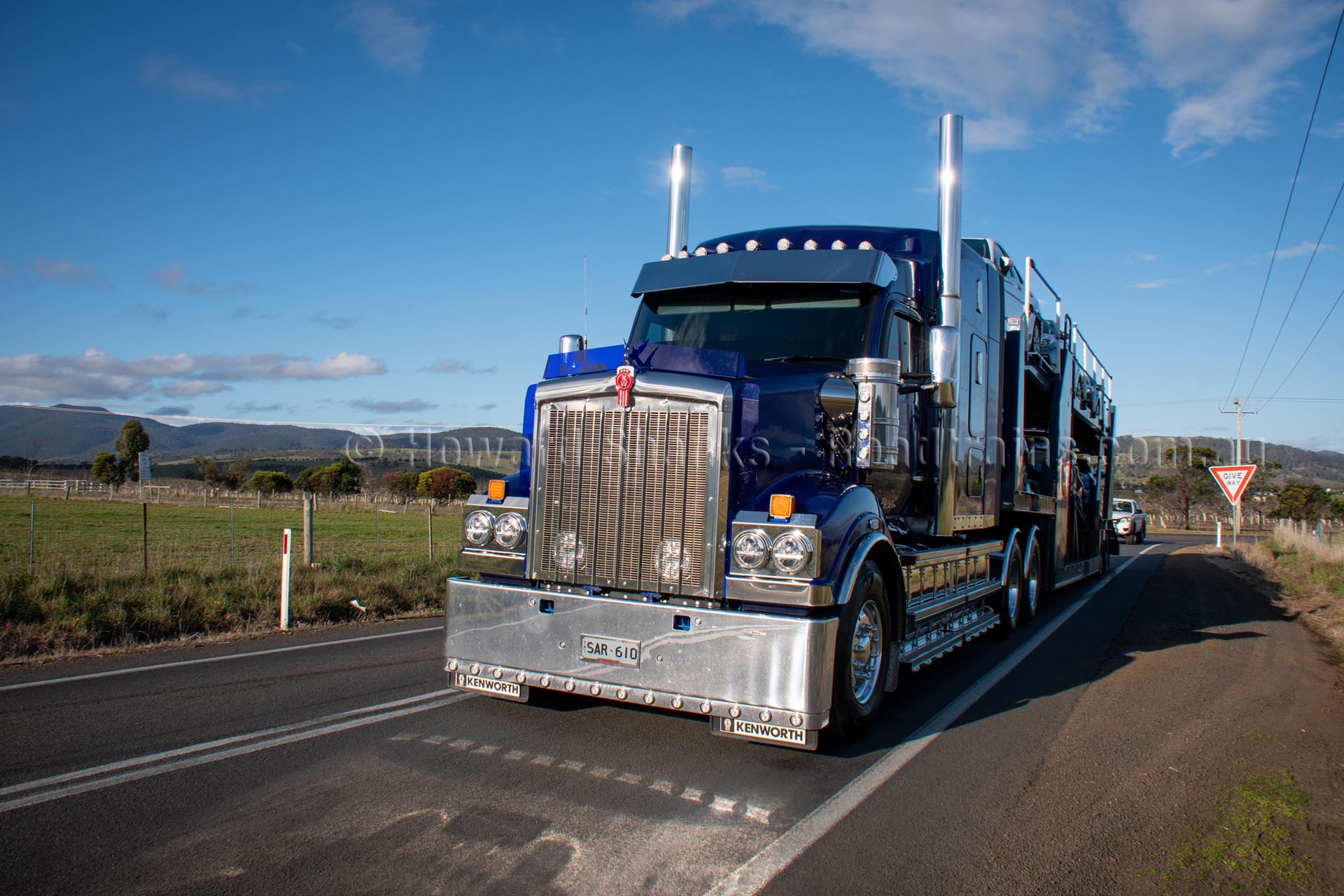 “I got my licence back around the end of 2011,” Daniel recalled. Albeit an automatic one. My old truck had CAT C16 with an 18-speed, consequently, after some preliminary enquiry about getting it converted to an automatic proved economically unviable, I traded it for 2006 T404SAR with a C15 and a three-pedal Eaton Autoshift. That truck really got me going again. I kept that T404SAR for five years then upgraded to a 2011 K200 Big-Cab.”

The decision to specify the new T610SAR this time involved two key considerations, the ability of Kenworth’s local engineering to customise the vehicle to better suit Daniel’s requirements and secondly provide application flexibility to be able to cover a diverse range of tasks.

“Certainly, there was some personal emotional aspect in my decision to go with Kenworth, Daniel admitted, with a smile. “Like most kids growing up around trucks, I’d always dreamed of owning a cool well specc’d Kenworth.” 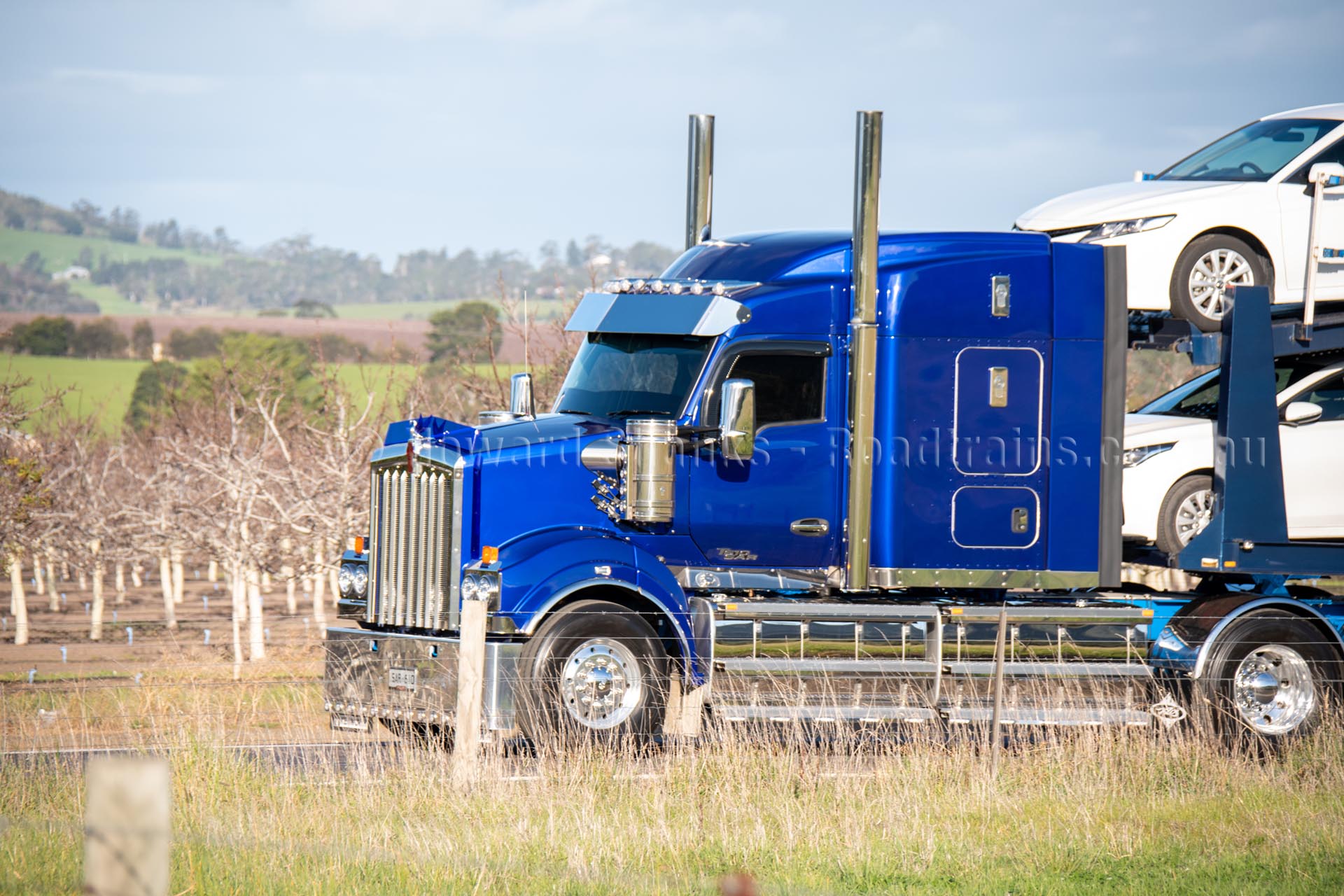 “Both Luke and Chris from CJD were extremely helpful during the purchasing of this truck,” Daniel said. “They really went to extraordinary lengths for me. Because I don’t have the use of my left arm, they were able to get the headlight dip-switch mounted on the floor and fit a paddle style gear shifter on the right of the steering column. It’s all these little things that make my life a ‘helluva’ lot easier,” Daniel added.” 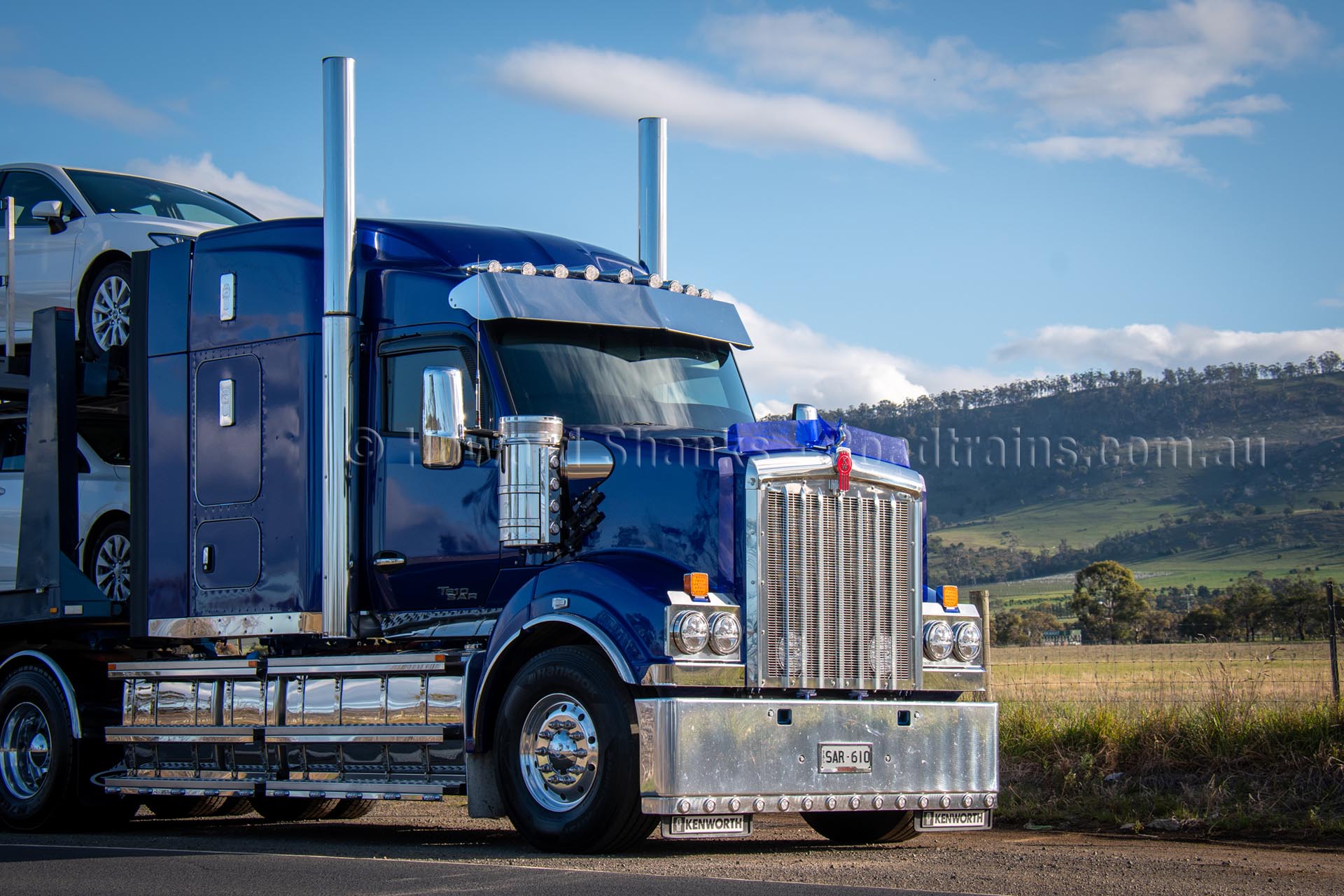 Behind the highly polished stainless steel grill sits a Cummins X15 rated at 550 HP (410kW) that produces 1850 lb-ft (2508 Nm) of torque. It is coupled to Eaton’s FO-22E318B-MXP Ultrashift-Plus transmission, with the optional Dual-Mode load sensitive skip shifting, Urge to Move and Hill Start Assist. The Cummins-Eaton combination features the latest ECM integrated power systems which include Smart-Torque-2 and Smart-Coast all designed to maximise fuel economy. To further enhance the fuel efficiency of this T610SAR Daniel specified the Meritor RT46-160GP rear axles with the taller 3.91:1 final drive ratio.

“Our older trucks had tall final drive ratios and they paid big dividends in fuel savings,” Daniel explained. “I’m seriously chasing high twos with this engine transmission and final drive ratio package. Straight out of the box its fuel economy is not too bad, and it’s getting better as it’s bedding in,” Daniel added. 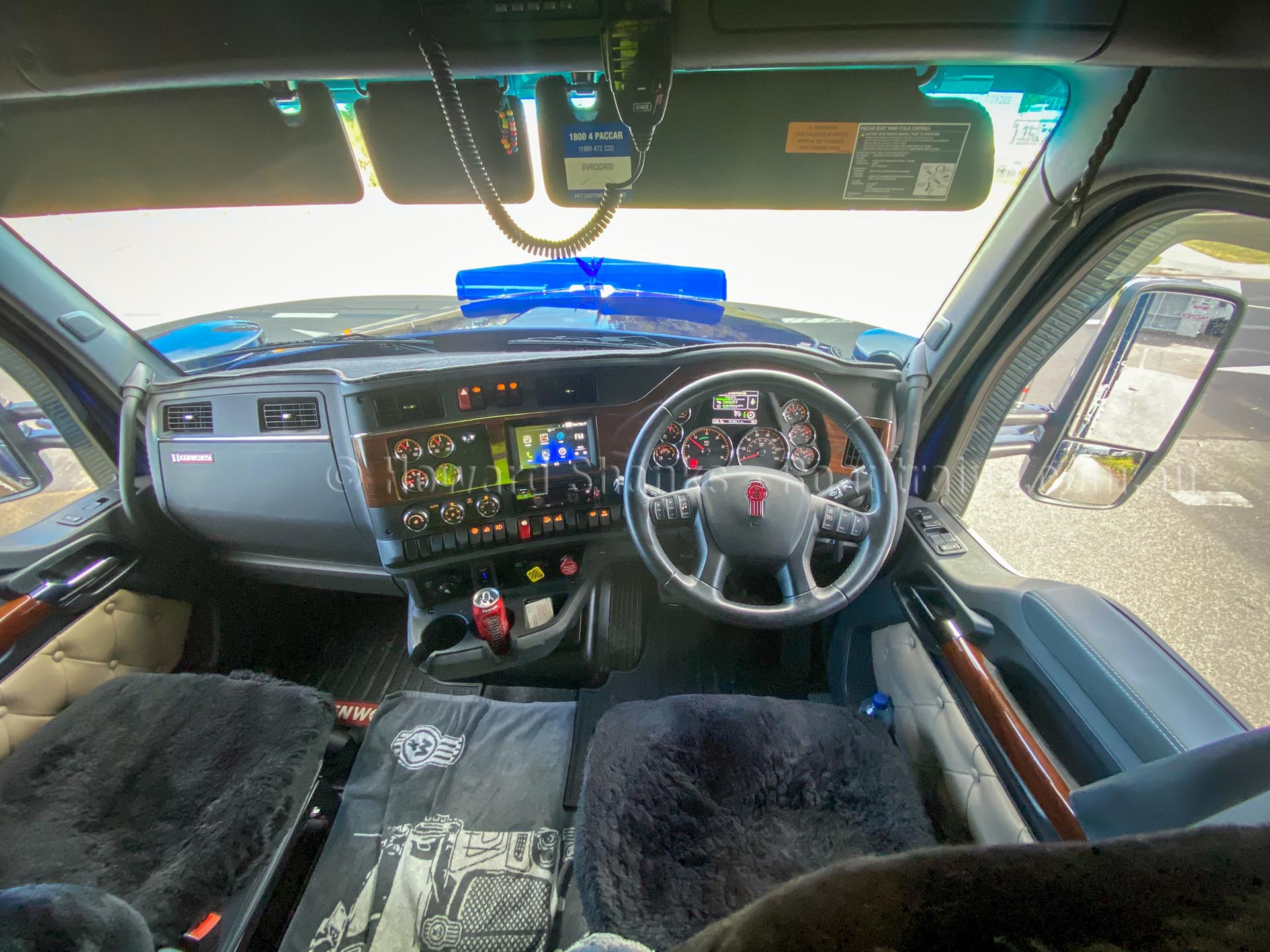 Future-proofing his investment is one reason for his decision to specify the top of the range 1400mm sleeper. The other is having a quality of life while working away from home. “A few years back it was considered the norm to leave Hobart at three in the morning to be in Devonport at the other end of the state at daybreak,” Daniel explained. “Then still do a full day’s work on top of that. Now with tighter regulations on fatigue and chain of responsibility, it’s far easier to go up the night before and have good night’s rest. You can do that comfortably in this 1400mm sleeper.”

Inside the sleeper, Daniel specified the twin, upper and lower bunk option so his children can accompany him on runs. The superior space also includes multiple storage tower and a large fridge. 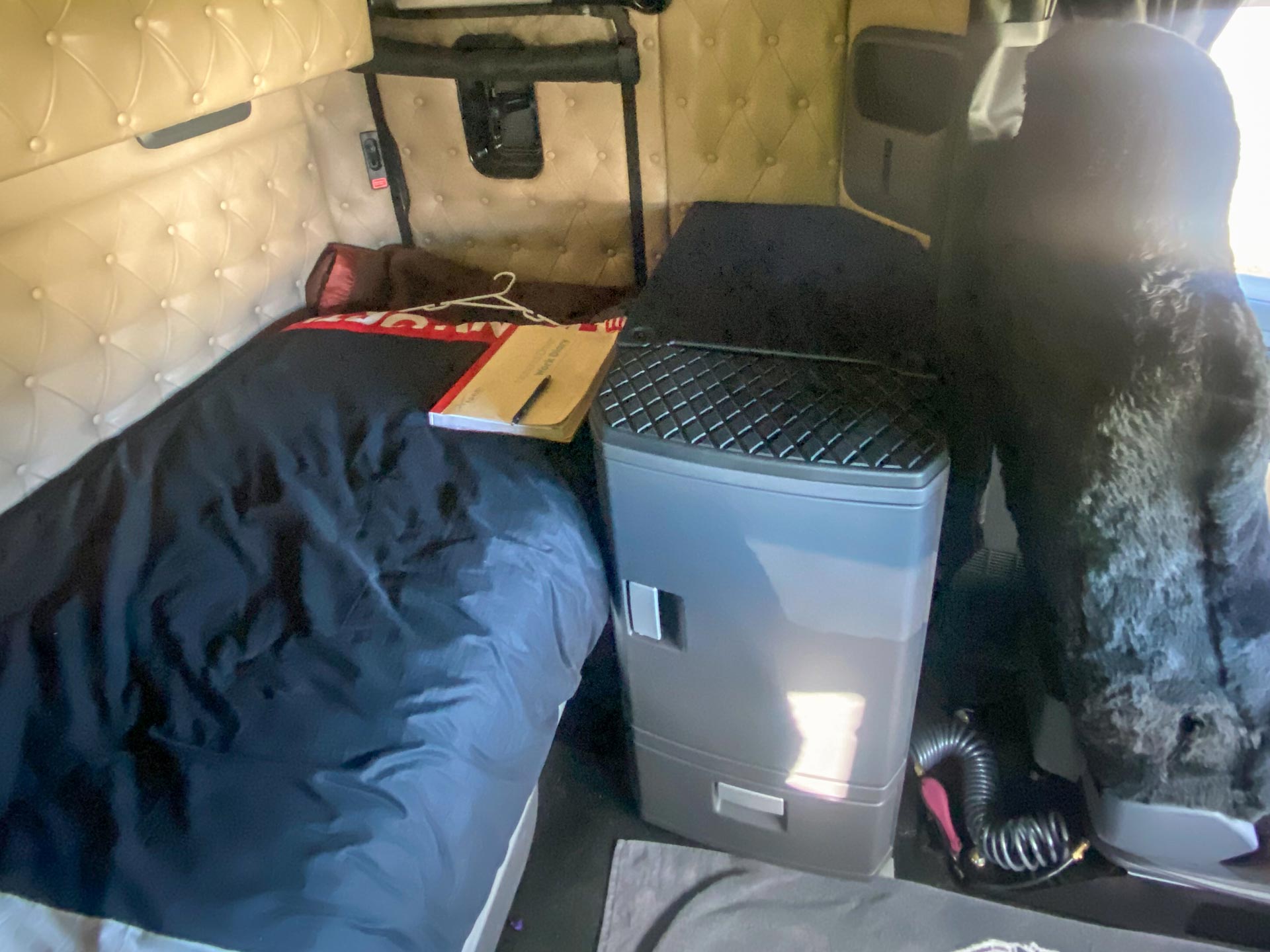 The main dash includes the PACCAR information centre which can display trip and fuel economy information. In the centre dash panel, is the PACCAR 7” display touch screen, which includes truck navigation, eight virtual gauges, the ability to view up to four cameras and of course the entertainment system.

The positive comments that Daniel has received about his Kenworth T610SAR combined with the economic gains it delivers are added verification that the choice Daniel made when he purchased this vehicle was the right one.

There is no question this journey so far has been a long tough haul for Daniel. Yet it’s been those work ethics and principals that his father instilled into him early in his trucking career that is his driving force. His determination to beat adversity to get back behind the wheel of a Kenworth truck is certainly inspirational. 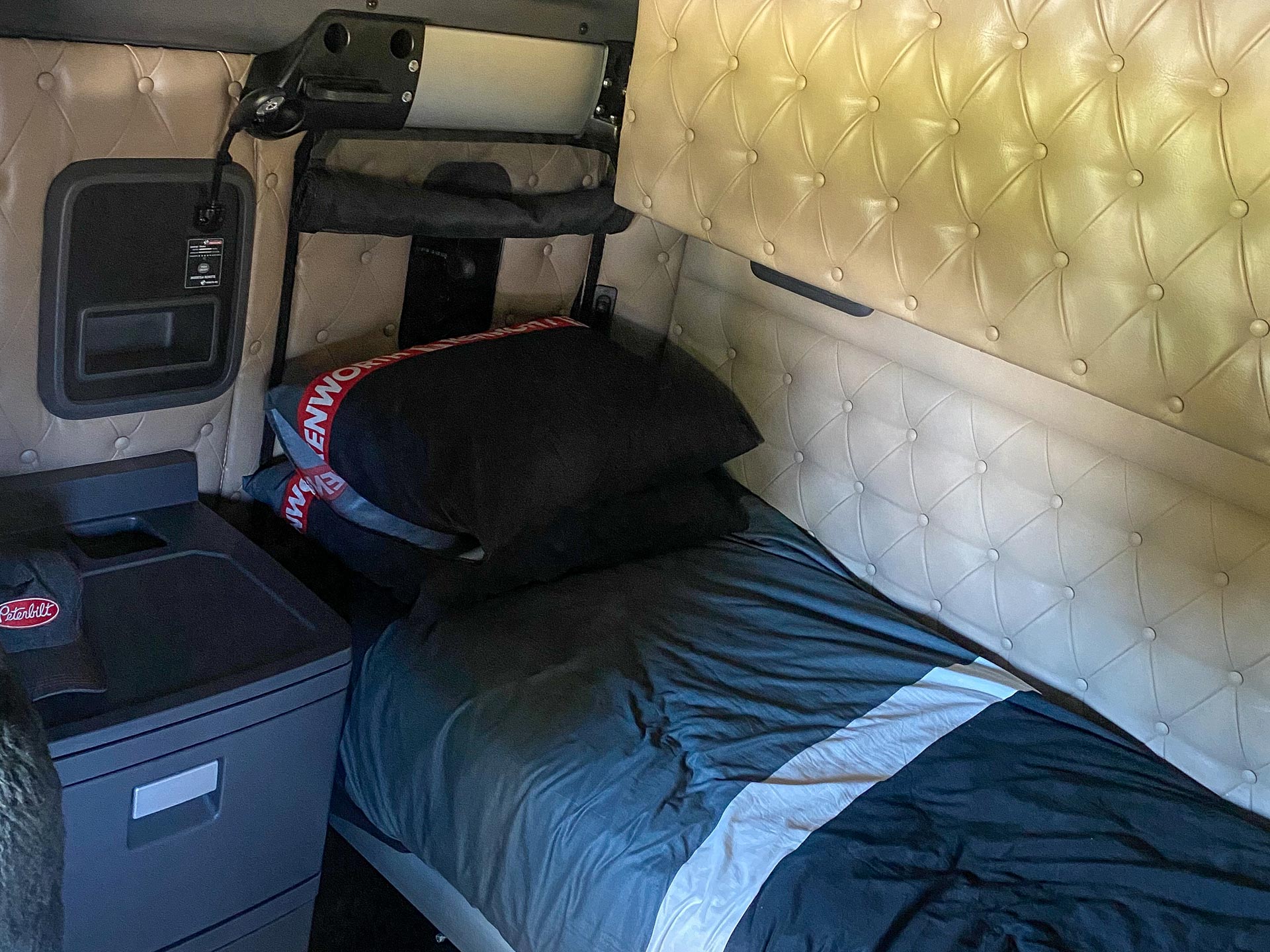 “Yes, planning and specifying this Kenworth T610SAR certainly was one of the highlights of the past decade for me,” Daniel said with a quiet smile. “Certainly, I’ve been a long time Kenworth fan, love cool trucks and always dreamed of driving them. That’s been my dream! I just hope that my story can inspire someone else who might be suffering personal hardship and help them take the first step towards achieving their dream.”

“However, at the end of the day we still need to run a profitable transport operation and we rely on the efficiencies and productivity of all our trucks to give us the competitive edge,” Daniel concluded. “That stems from the truck’s image through to the economy and reliability and that’s what we are getting from our Kenworth trucks and back up from CJD Equipment.” 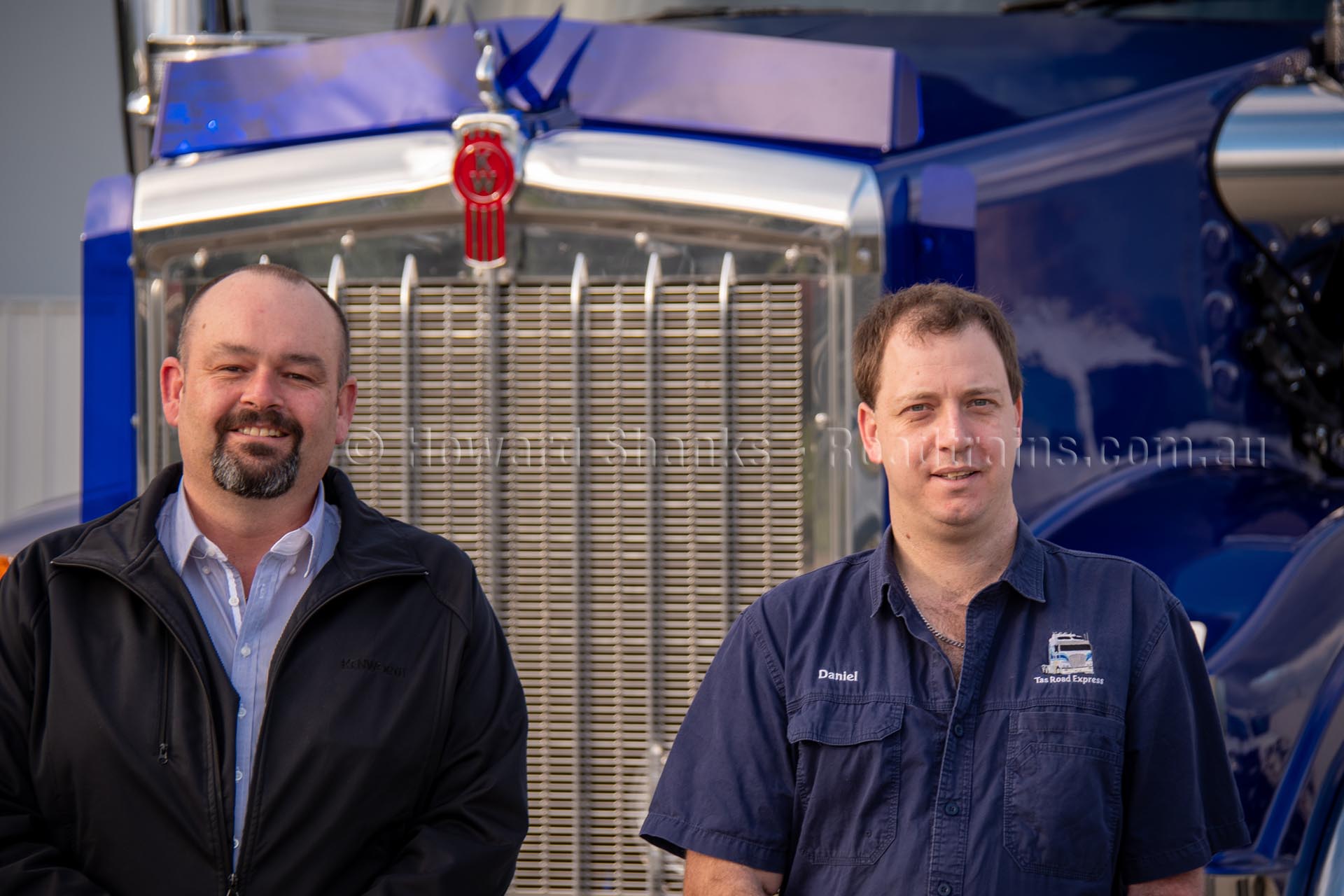 Cab to end of Frame: