These are good days for Kenworth. The company is logging good sales numbers, and that includes high volumes for its T610SAR in vocational applications. We sent Technical Editor Howard Shanks off to a sand quarry in Western Victoria to put a T610SAR with Cummins Integrated power coupled to an Eaton Ultrashift Plus through its paces … 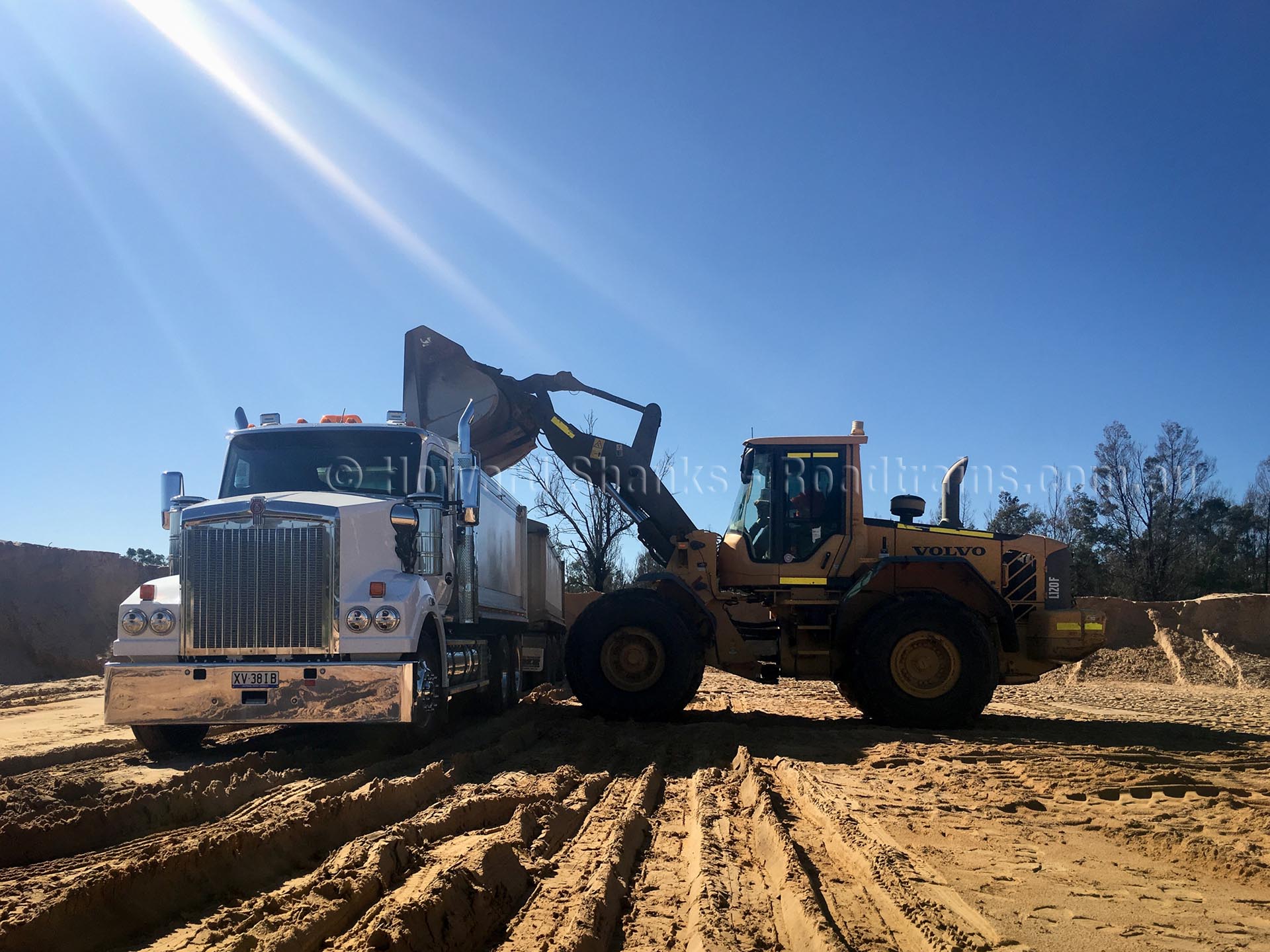 Recently, at the foot of the Grampian Ranges in the Wimmera district of Western Victoria, I pulled a typical tipper spec’d Kenworth T610SAR next to the waiting wheel loader in the sand quarry. I’d been given the opportunity to put the T610SAR through its paces to see not only why this truck has proven to be such a winner since its launch three years ago, but why its established such dominance in the quarry industry and how the Eaton Ultrashift Plus performs in an application where manual transmissions have been king since the introduction of motorised transport.

To begin with, the T610SAR takes essentially everything Kenworth has learned about trucking over the past 40 years and boiled it down into the company’s take on a quintessential work truck. If you’re a Kenworth fan, it’s all here: The broad-shouldered stance, the flash chrome grille, polished stainless air-cleaners topped off with the sloped hood, all set the tone from outside the truck. Then you climb up into the cab and note the luxurious creature comforts gleaned from years of refinement on Kenworth’s family of long-haul prime movers.

Since its launch in late 2016, Kenworth hasn’t done much to tweak the T610SAR design beyond a few, minor, under-the-skin changes. Most of these deal with air and electric line routings. What the company has been doing, however, is working closely with suppliers such as Cummins and Eaton to enhance the specs fleets can choose from when ordering their truck.

Manual transmissions still form a considerable portion of Kenworth’s vocational sales. However, that trend is changing, automated transmissions are being optioned more and more, mostly driven by a severe shortage of skilled drivers who can operate a manual transmission competently. And it’s fast becoming a real problem for country based fleets.

Ararat based Graeme McKay Earthworks and Cartage owner, Graeme McKay and his Operations Manager, Byron Day, both agree. They’re the guys that lent us the trailer. 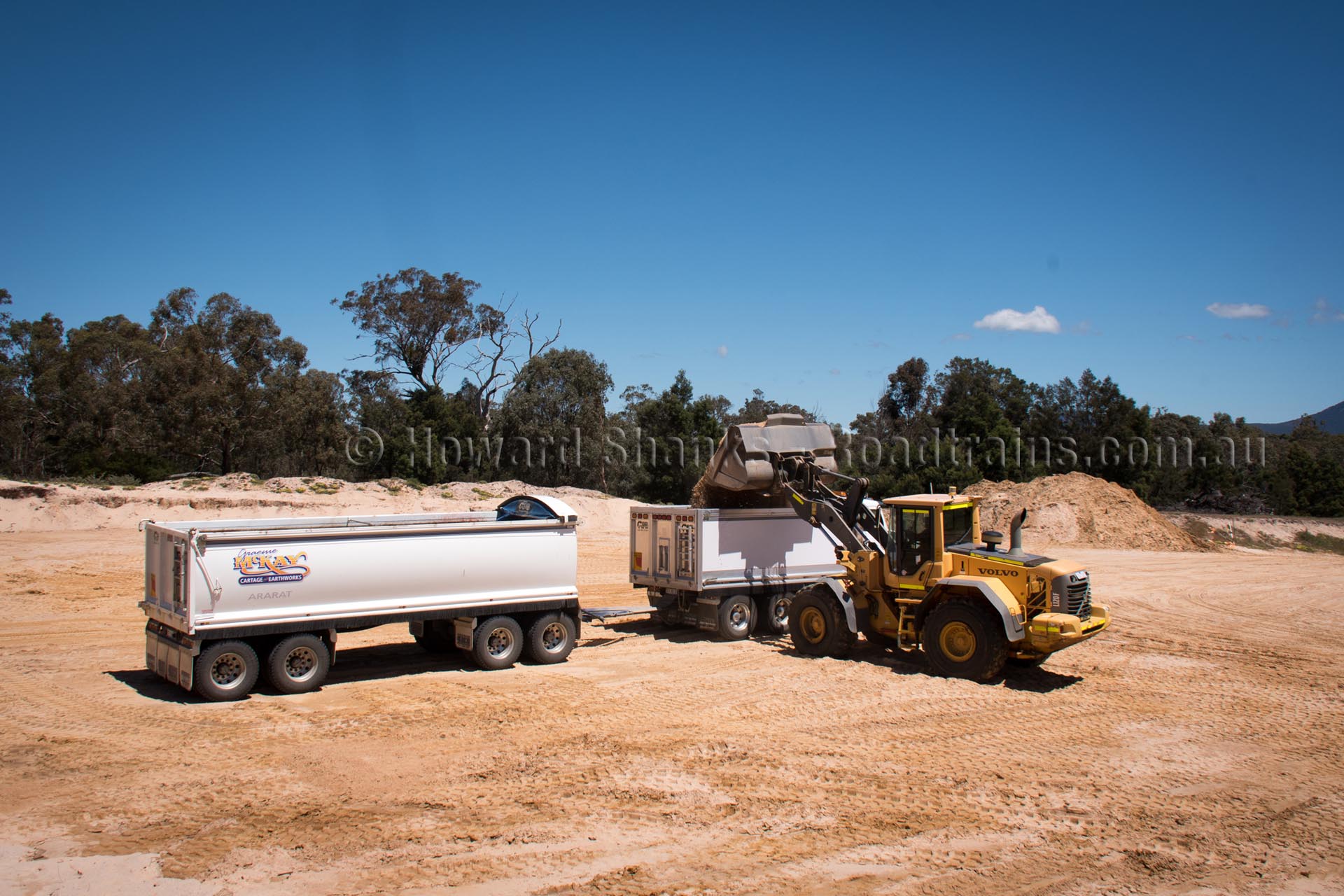 “Actually, we’re starting to see it now,” Byron said. “Going forward we need to specify trucks that both our older and new generation of drivers can operate. But importantly we need to know that these new AMT transmissions can reliably perform the same tasks as our trucks with the manual transmissions. Unfortunately, we’ve had some bad experiences with earlier AMT transmissions,” he added. “That’s why we are very keen to see how the Ultrashift will operate, what efficiencies we will get, but importantly how our drivers will accept the new technology.” 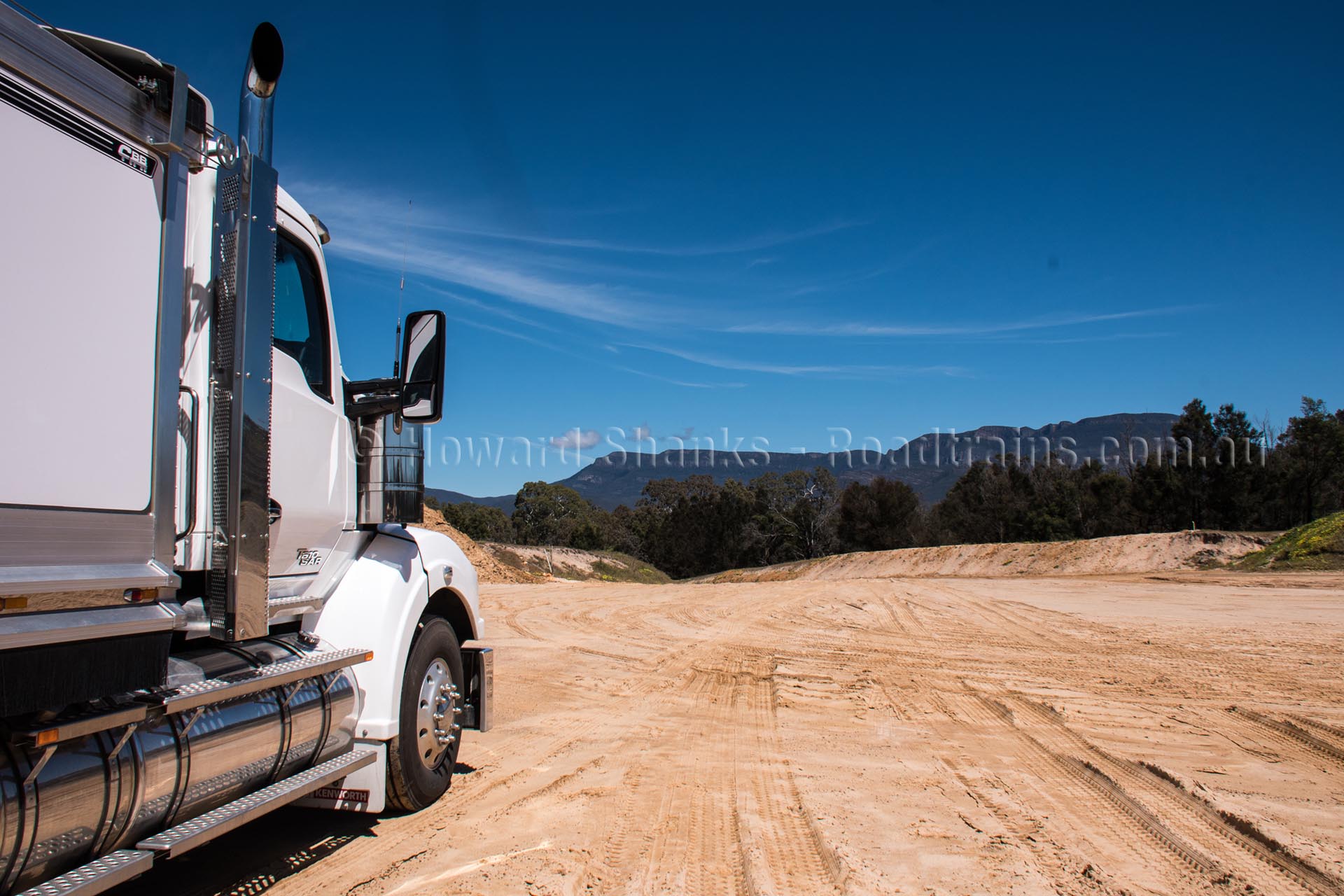 If you’ve climbed into a Kenworth cab lately, there are a lot of familiar features awaiting you once you settle behind the wheel of the T610SAR. As modern as this truck is, there’s still a hint of nostalgia too, with premium woodgrain dash, chrome bezel gauges and diamond pleated vinyl interior.

Our test drive area was typical of a country/quarry environment, undulating rural country roads with lots of climbs, descents and twists. Temperatures this time of the year in the Wimmera can vary from chilly mornings through to sweltering afternoons. The performance of a truck’s air conditioning system is of vital importance for driver safety, comfort and productivity. And on this count, the T610SAR’s air conditioning delivered in spades. In the pre-dawn darkness, the system warmed the inside of the cabin nicely as icicles tried to form into a thick frost on the ground outside. However, by mid-afternoon, it was a different story with a bright sun driving the mercury upwards towards the low thirties. During the heat of the day, the HVAC system delivered a steady stream of ice-cold air to keep the cab comfortable – and it wasn’t necessary to keep the fan cranked up to full blast to do so. Moreover, the HVAC in the T610SAR is remarkably quiet.

In fact, the entire cab on the T610SAR is amazingly quiet, considering the brutal terrain we were driving in. Given all the bumps, jars, ruts, hills and air conditioning going on while we twisted and turned our way around the back roads of the Grampians, it was surprisingly easy to have a conversation with my passenger. Outside noises from the suspension, the road, and powertrain are muted to an impressive degree, a testament that the sound insulation work on the cab by Kenworth designers is exceptional.

Looking forward from the driver’s seat, you’re greeted with Kenworth’s usual sweeping, panoramic views over the sloped front hood. Views to either side of the truck are excellent as well. Rear-view mirror placement is excellent, and Kenworth engineers deserve a lot of praise for the design of the mirror brackets. Our test track certainly featured a seemingly endless series of small hills, ruts, bumps, rocks and inclines. And yet, as bouncy and bumpy as the ride got, the T610SAR’s mirrors stayed rock-steady the entire time.

That’s probably because they are sturdily mounted on the cabin A-pillar section to eliminate vibration which means you get clear steady vision all the time. Secondly, they don’t require constant adjustment like door-mounted mirrors, and furthermore for added safety, when you open the door to step out of the cabin you can still look in the mirror to see if there are any approaching vehicles before stepping from the cabin.

Another feature is the breakaway function that enables the mirrors to be folded back towards the door. This feature is useful when using automated truck washes with rotating brooms to protect the mirrors from damage.

Another point must be made about the steering system on the T610SAR. Steering and handling is always a feature I key in on when test driving a truck. Nowhere else does a steering system have to step up as it does on a tough, off-road course with hairpin turns and other sudden twists and turns. The steering response was crisp and immediate, with no over or understeer required. Likewise, the truck instantly went were you wanted it to without trying to wander off if the steer wheels happened upon a rut they were particularly fond of. 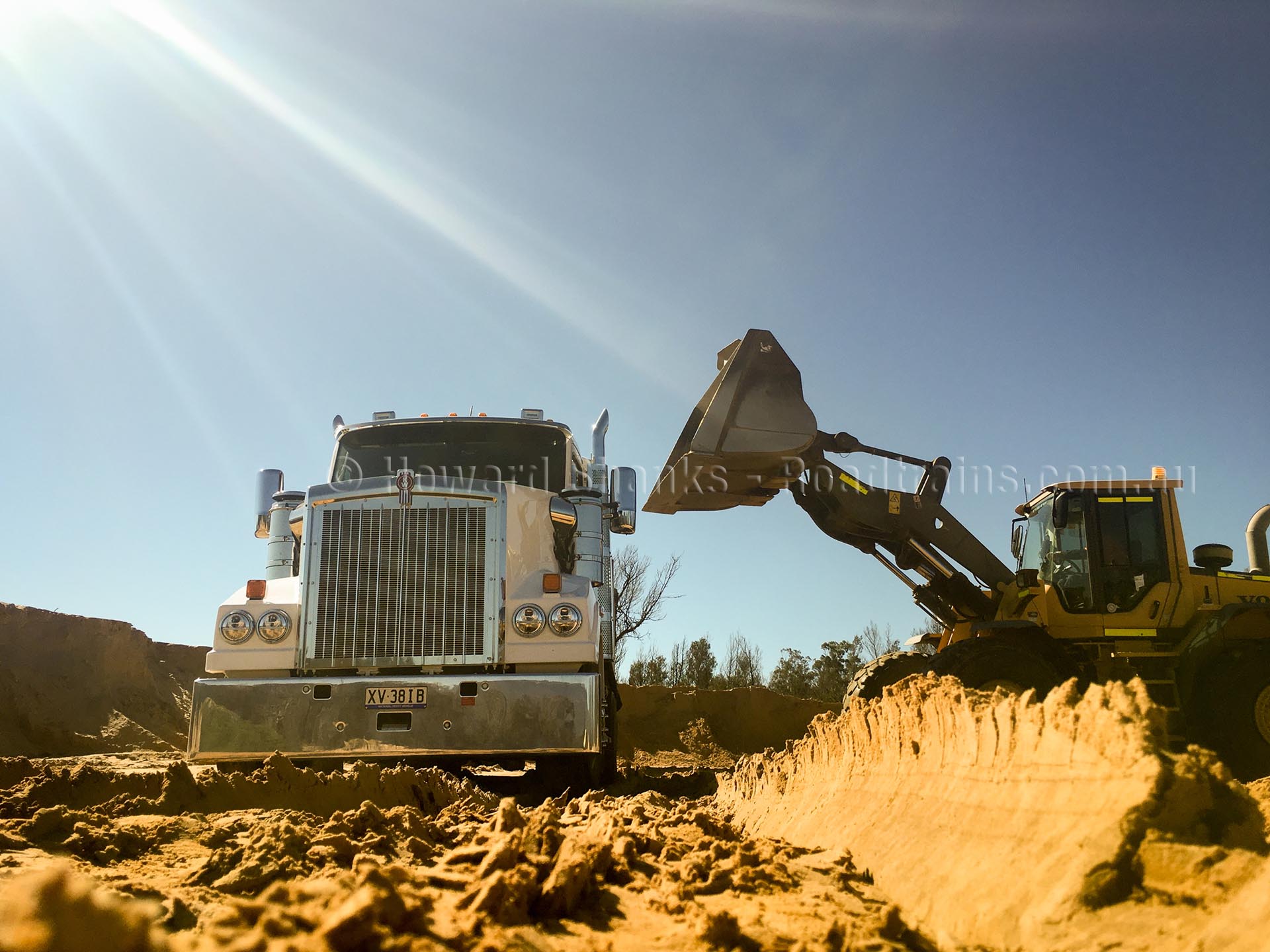 What makes this truck tick and deliver exceptional fuel economy is a result of a joint venture between Cummins and Eaton they like to call the “SmartAdvantage”. It’s a combination of the X15 Cummins set at 550 HP delivering peak torque of 1850 lb-ft torque coupled to an 18-Speed AMT. The “SmartAdvantage” powertrain makes use of small step-overdrive transmission that allows fleets to choose the best ratio for their application, cruise speed and terrain.

But it’s the new low-speed features that make this Ultrashift Plus better suited for vocational applications like truck and dog tipper tasks where low speed is an integral part of the job.

Up until now, most AMTs on the market today, regardless of brand, are too aggressive at low speeds. Drivers have often had a hard time metering subtle inputs into the accelerator and found it hard to maintain a consistent, manageable low speed when backing to connect a trailer or in vocational applications spreading gravel.

What’s now called the “Blended Pedal” system uses a new way of controlling the transmission to counter this problem. Traditionally, when a driver depresses the accelerator pedal, they are boosting the air-fuel mixture into the combustion chamber to increase horsepower. But now with the new Ultrashift Plus, up to 50 per cent of initial throttle input now controls transmission clutch actuation. This allows drivers the ability to better fine-tune their low speed manoeuvrability and easily this to meet specific tasks. 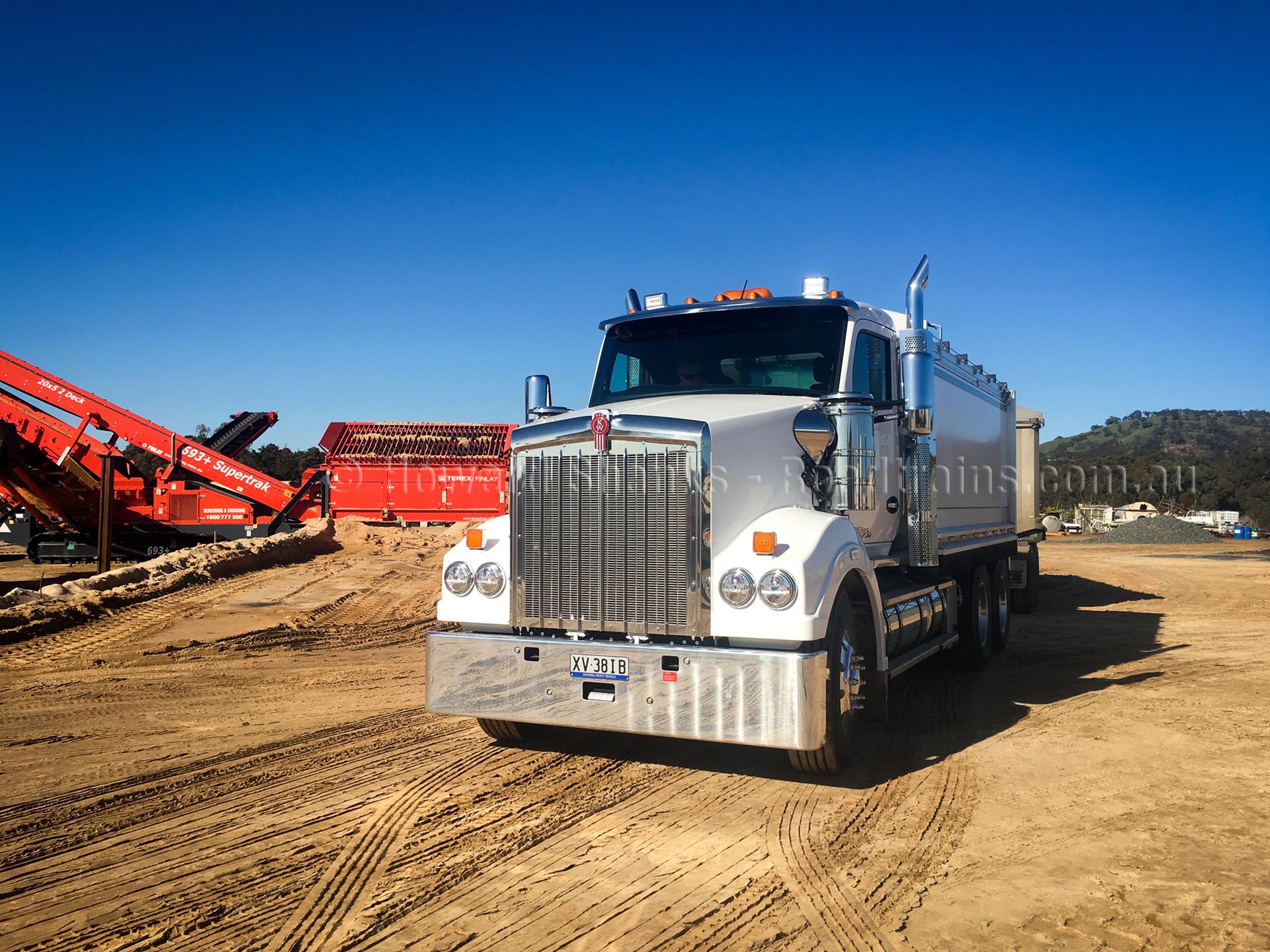 In low forward gears, I was able to utilise the “Urge to Move” function. This function integrates with the pre-existing “Hill Hold” feature, where the transmission holds the truck in place. With “Urge to Move” as RPMs and torque increases then the vehicle slowly starts moving forward at creeping pace.

The combined systems are impressive: The Ultrashift Plus effortlessly held the T610SAR and quad dog loaded with 50 tonnes at a dead stop on eight and 15 per cent grades during my evaluation drive and then easily started the truck moving uphill with only gentle throttle input. The system works just as well on declines as well, however gravity, load and inertia will eventually cause the transmission to shift out of Urge to Move mode and require an application of the brake pedal.

Take note of the “C2” illuminated at the top right of the gear selection display in the dash panel. This indicates the transmission is using a secondary shift pattern called “Dual Mode” a feature designed add a supplementary shift pattern into the transmission ECU to promote additional fuel economy in applications where trucks run one way empty. When the vehicle is in the “C2” mode, uses a higher start gear, promotes skip shifting and instigates more economical changes at lower RPM. All these enhancements reinforce Cummins and Eaton’s “continuous improvement” strategy for SmartAdvantage drivetrains and Ultrashift Plus AMTs.

The system is highly intuitive and works well. I was able to test out the full SmartAdvantage features during a full day’s work out. In all instances, I was able to easily, and precisely, control the truck’s speed. And the system is so finely tuned that even minuscule inputs on the accelerator immediately yielded tightly-controlled RPM and speed adjustments.

All told, it’s easy to see why Kenworth is posting record numbers in gaining vocational market share these days. They have a solid, comfortable and well thought out design on their hands with the T610SAR that is perfectly happy running in some of the brutal and diverse terrain imaginable. 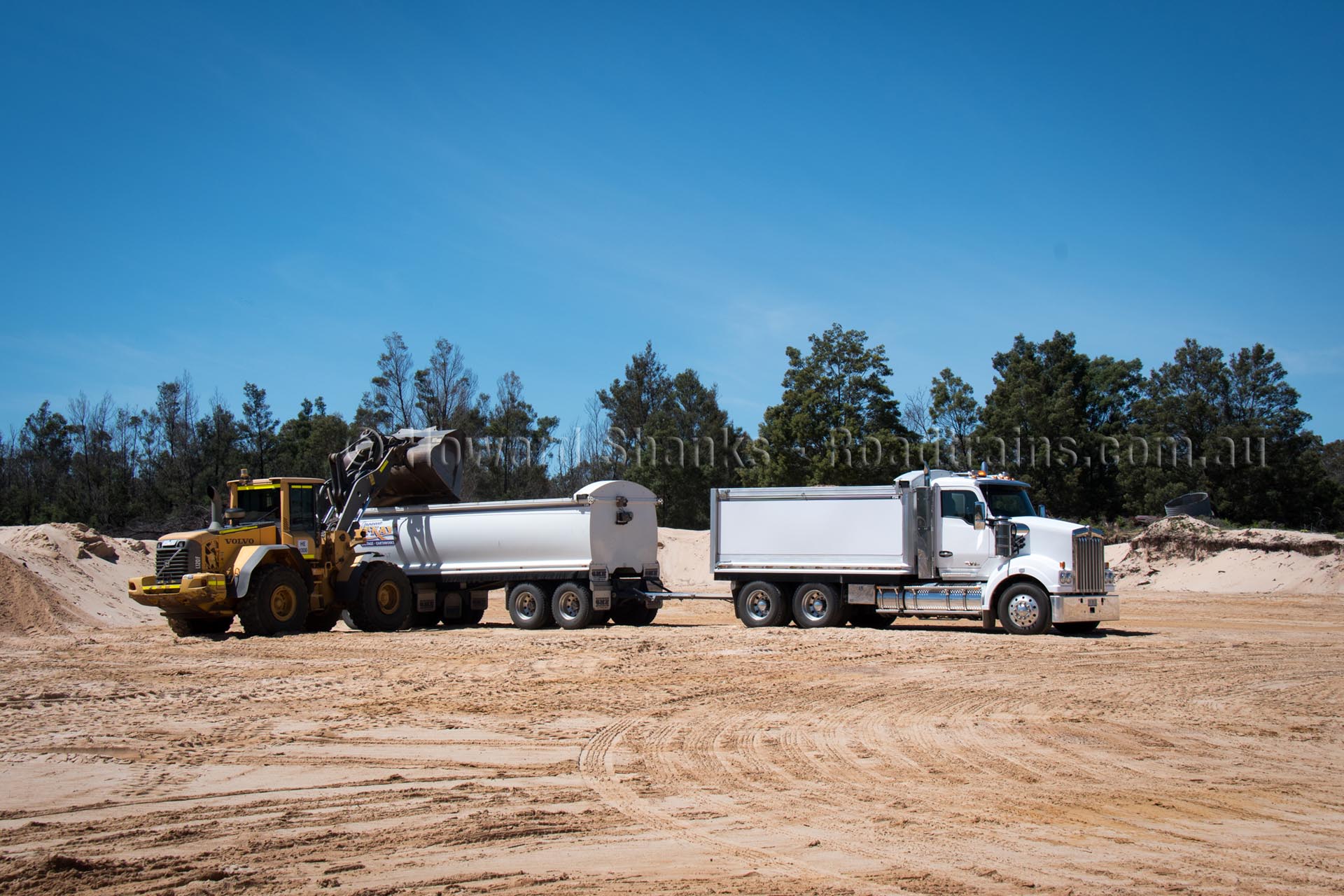