Every premiership winning football team has at least one multipurpose utility player on their side. Successful winning transport companies, like premiership winning football teams, have at least one multipurpose utility truck in their fleet, Kenworth’s new T410 is certainly ticking all the boxes as the best value for money all-rounder. 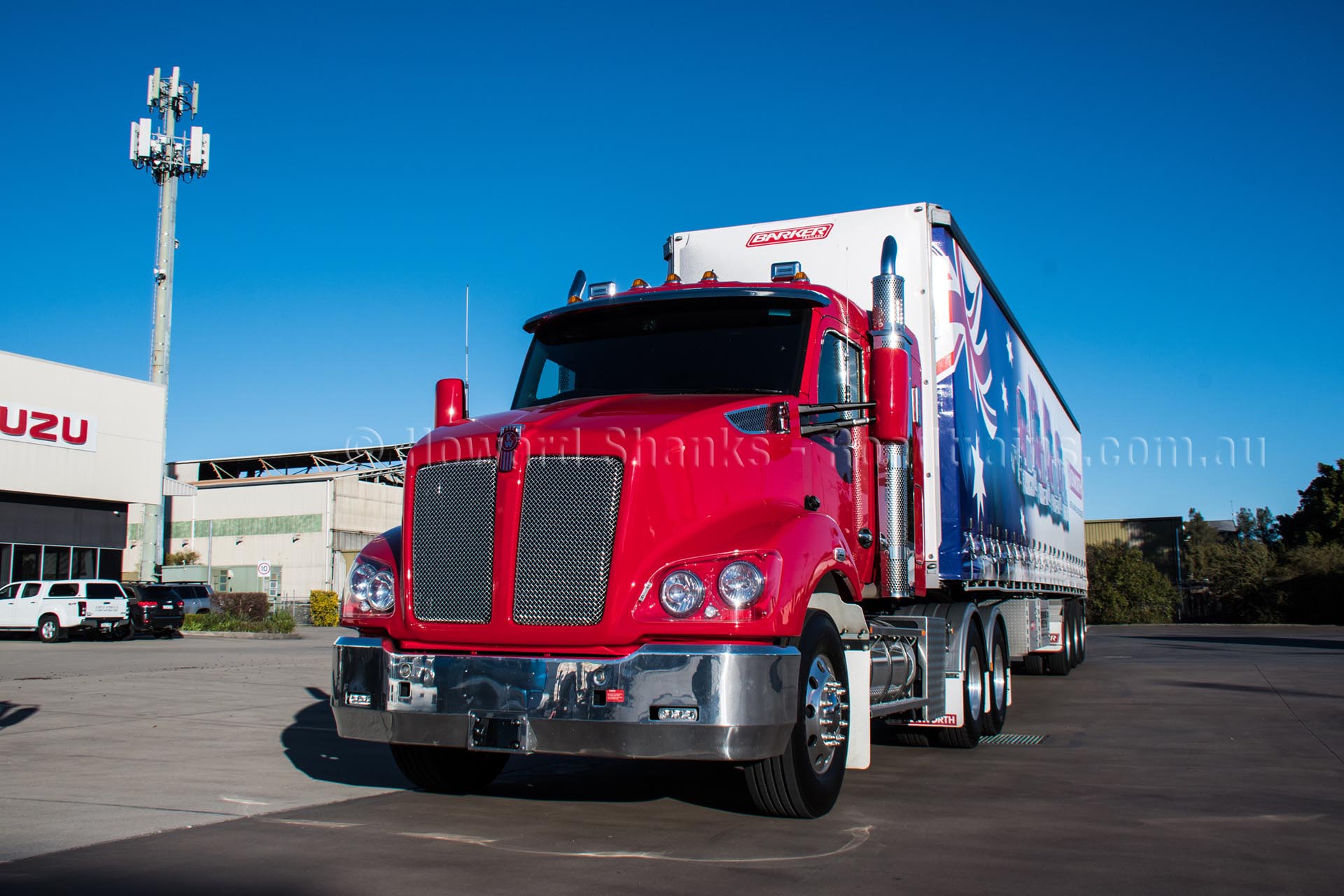 One of the key successes to the Sydney Rooster’s consistent winning streak in no small part can be attributed to the efforts of their utility player, Mitchell Aubusson, who can mould seamlessly into any position without upsetting the line-up. It is a rare and acquired skill and one that Sydney Rooster’s head coach, Trent Robinson, knows only too well because he can trust Mitchell to easily play at least eight out the thirteen positions on the field, there is minimal disruption to the team when Mitchel enters the line-up. Much like Mitchel Aubusson, Kenworth’s T410 is a model that can easily fit a wide range of applications, not all, but most and certainly a valuable asset to have you your team.

To find out first hand just how well the new Kenworth T410 will fit into the team, we sent technical editor, Howard Shanks, to the trucking heartland of central NSW for a real-world road test.

Inland Truck Centres’ Chris McDevitt was waiting at Wagga Wagga airport when the tiny twin-prop plane touched down, on the way to the dealership he explained the key features of the T410. He’d had a large number of customers view and test this demonstrator truck over the past week and added that the customer acceptance had been extremely favourable. 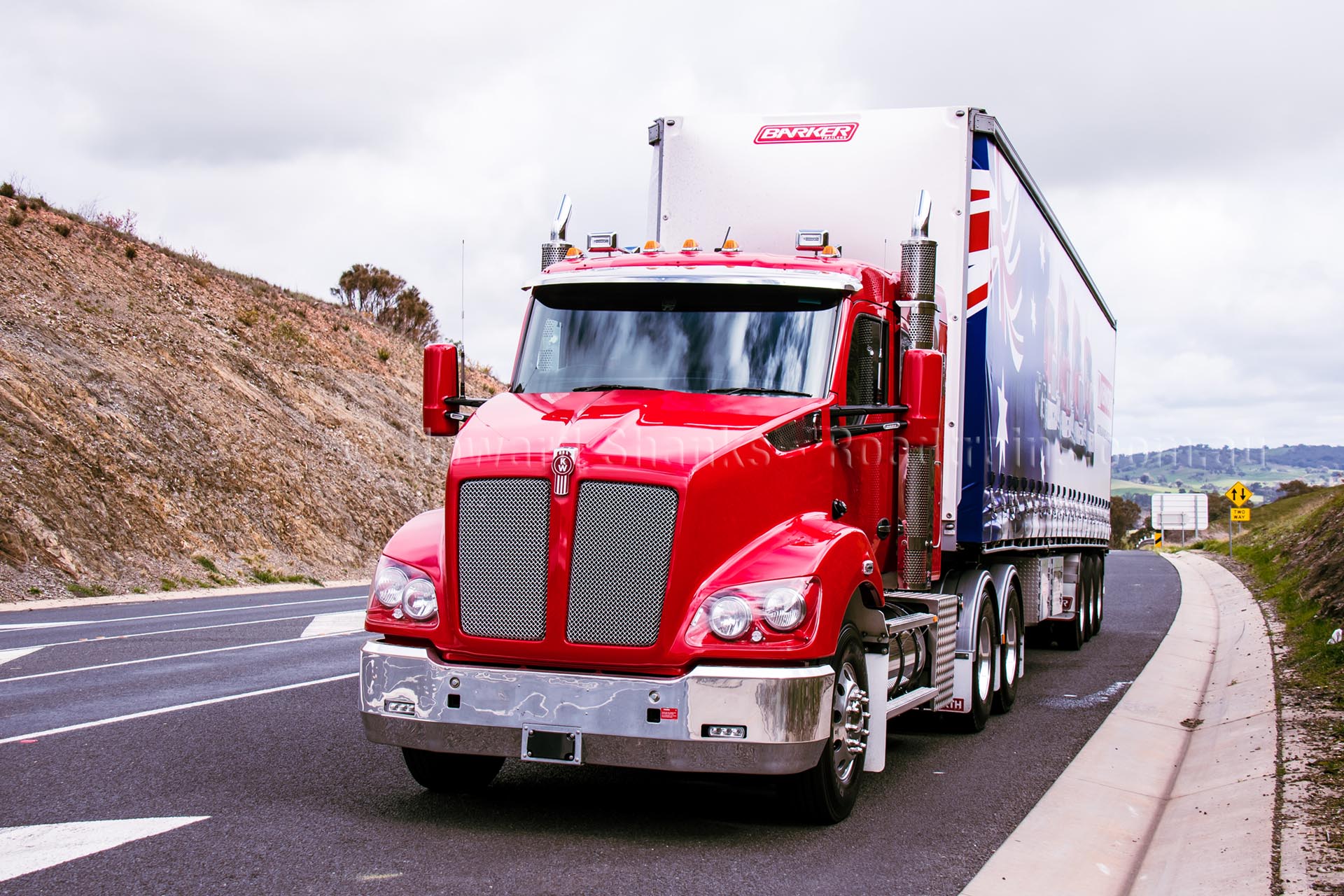 Our route for the road test was a 600km trek north up to Gilbert and Roach’s Hexham dealership. This journey had a diverse collection of road conditions, from gentle rolling rural country roads, following freeways and city congestion along Pennant Hills Road.

Whether it was good planning or merely the luck of the draw, we’d managed to leave Wagga Wagga shortly before midday, this afforded the opportunity for a few photos stops along the way before hitting Sydney’s notorious Pennant Hills Road right in the middle of peak hour. Given that a large majority of this model will end up working in a metropolitan application a real-world experience in rush hour traffic was certainly fitting. 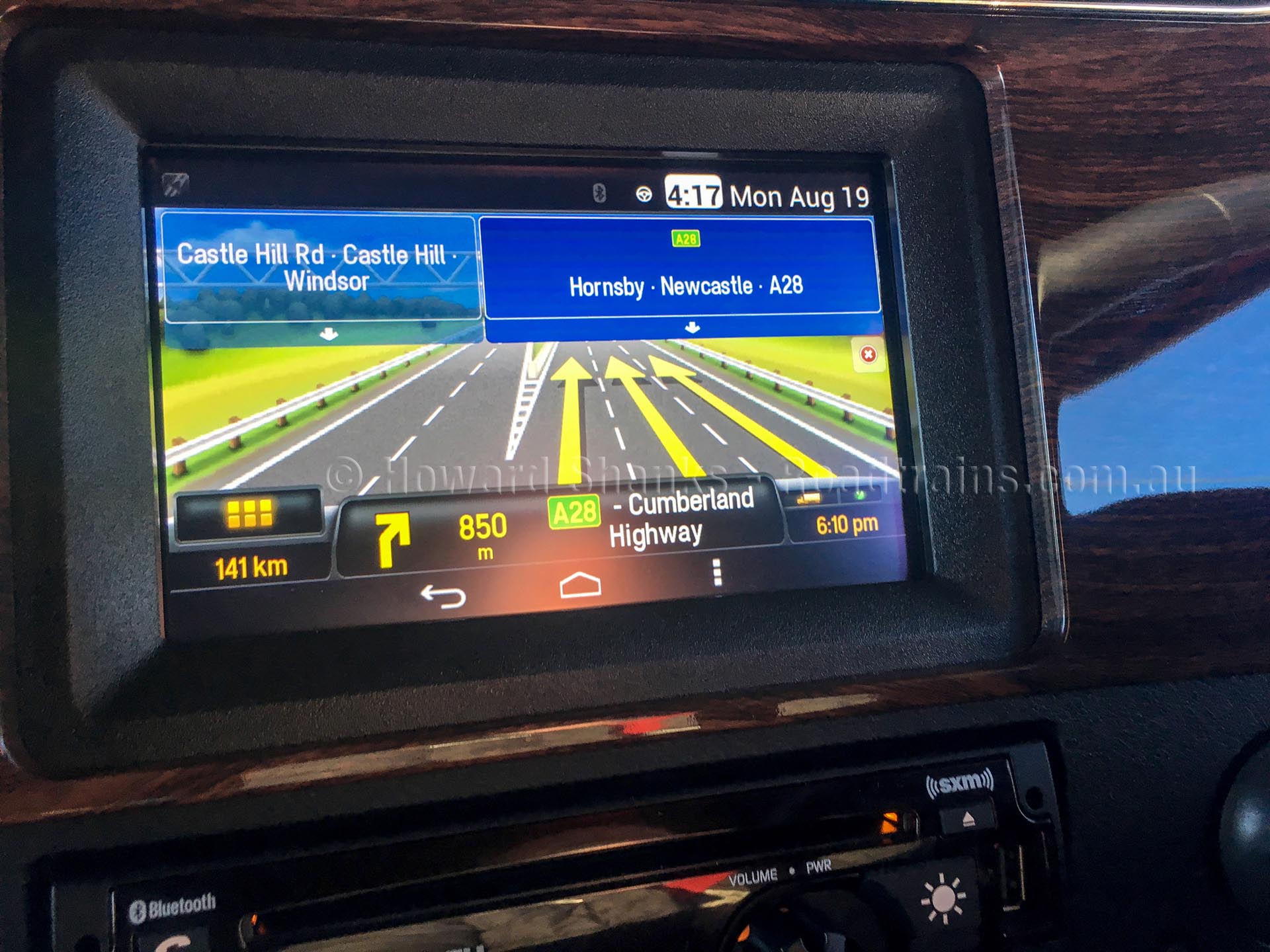 Where does the T410 earn its’ multipurpose utility player reputation?

Essentially, in terms of market placement it’s a midfielder, but, it can slot nicely into heavier duty applications as well as vocational roles, so it’s an extremely versatile truck. For instance, it can be specked as a day cab with a short 4500mm wheelbase, small fuel tanks, the new lightweight PACCAR 12-speed and tare in just under 8-tonne. Couple this up to a lightweight triaxle trailer and payloads close to 30-tonne can be realised with mass management. A perfect combo for metro/intrastate operations where maximum productivity is measured in cents/tonne/km.

The specification choice for this model is extremely comprehensive, too long to list here, however it includes a selection of interiors, sleeper, engine power, transmission, final drive, and axle configurations. Along with the extensive option availability, the T410 also boasts a significant number of standard features designed to extend service intervals and reduce operating costs like the dual air intakes with inbuilt hood pre-cleaners, breakaway mirror brackets, twin round 7-inch headlights, and triple-sealed doors and apertures to mention a few.

The T410 we’d been given for our evaluation road test had the PACCAR MX13 engine rated at 510HP, coupled to the new lightweight PACCAR 12-speed which delivered the power to the Dana DS/RDH40P final drives with a 3.90:1 ratio. This vehicle also had the optional fuel haul kit. The PACCAR 12-speed is rated up to 50-tonne GVM, for higher GVM applications such as B-Double the Eaton 18-speed or Ultrashift is required. 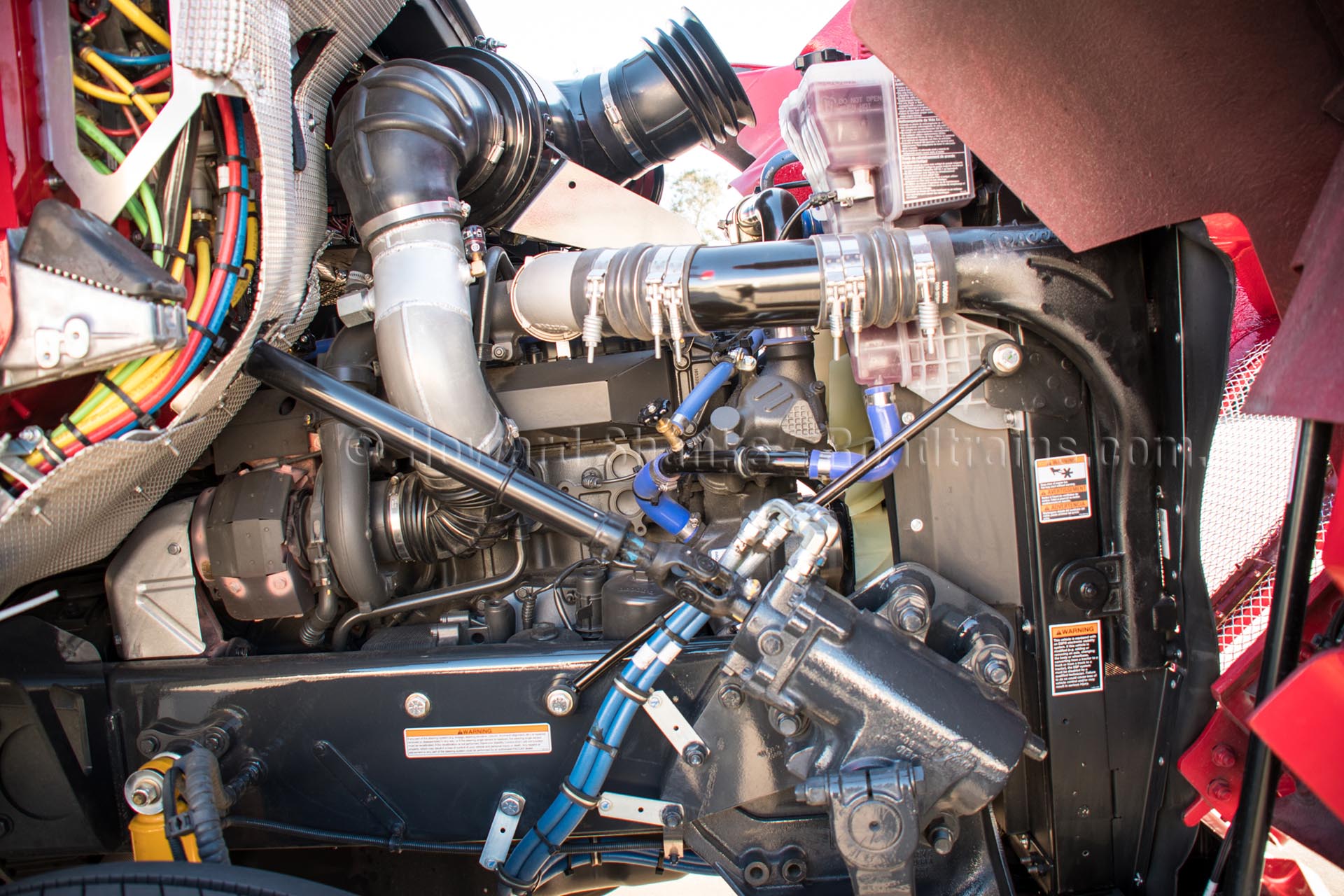 For peace of mind for both the owner and operator, this vehicle came with the full safety suite, including adaptive cruise with brakes. On the freeway, this safety feature really works a treat keeping a safe distance from the vehicle in front, with little effort required by the driver.

The column-mounted gear shifter is new to the Kenworth product, it sits where the traditional trailer brake lever used to be. The trailer brake is now operated by a small “duckbill” switch mounted on the dash near the left side of the steering column. 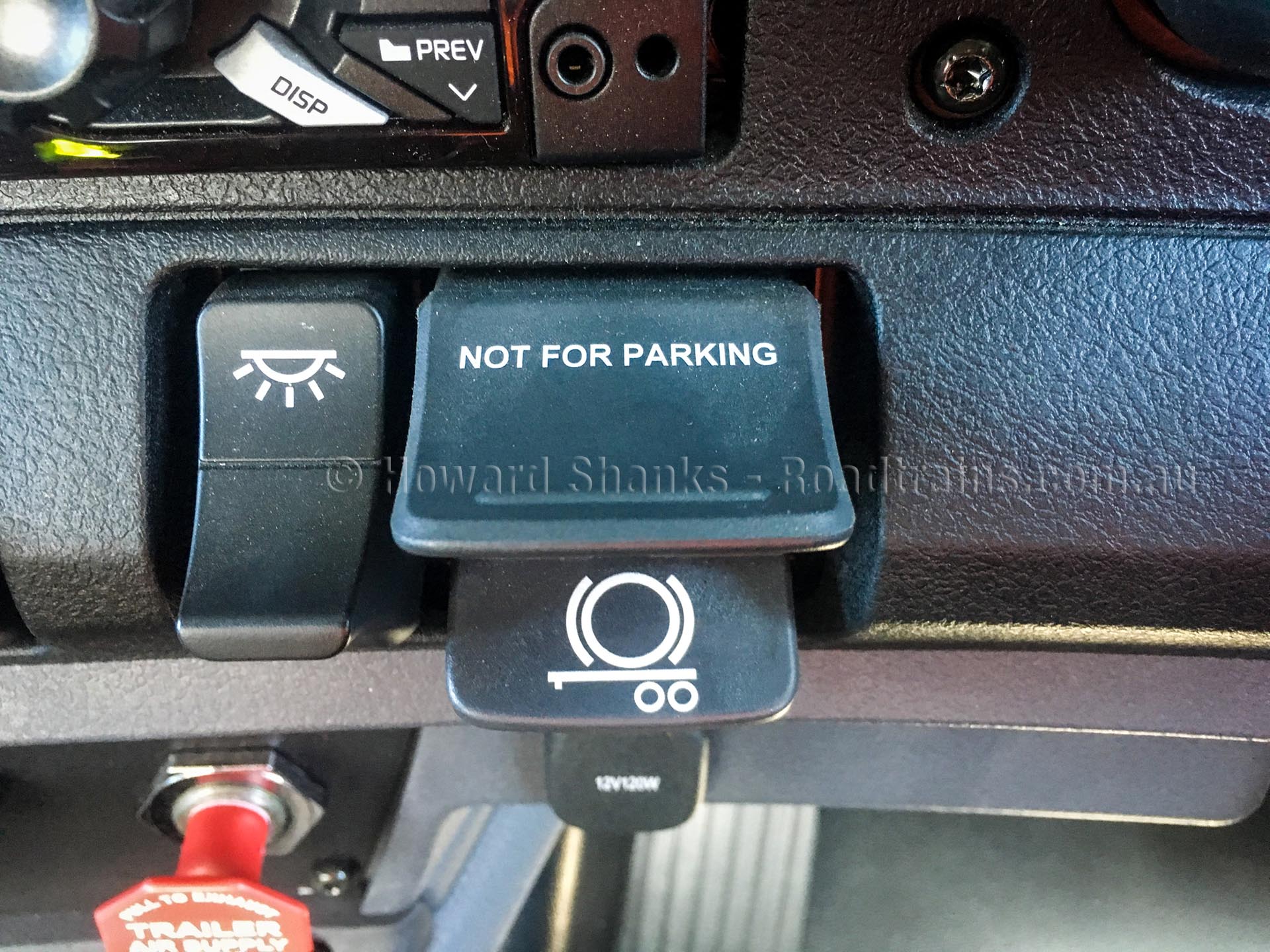 The column-mounted gear lever is truly a multifunction switch and allows selection of all the gears and their functionality as well as activate the engine brake, this works similarly for either the PACCAR 12-speed and Eaton Ultrashift transmissions. For vehicles specked with a manual transmission this lever only controls the engine brake.

To get this Paccar 12-Speed transmission into gear, it’s simply a matter of depressing the brake and rotating the outer dial to the “D” position. The gear indicator on the dash changes from “N” to 2 which is letting us know it’s going to take off in second gear this time. 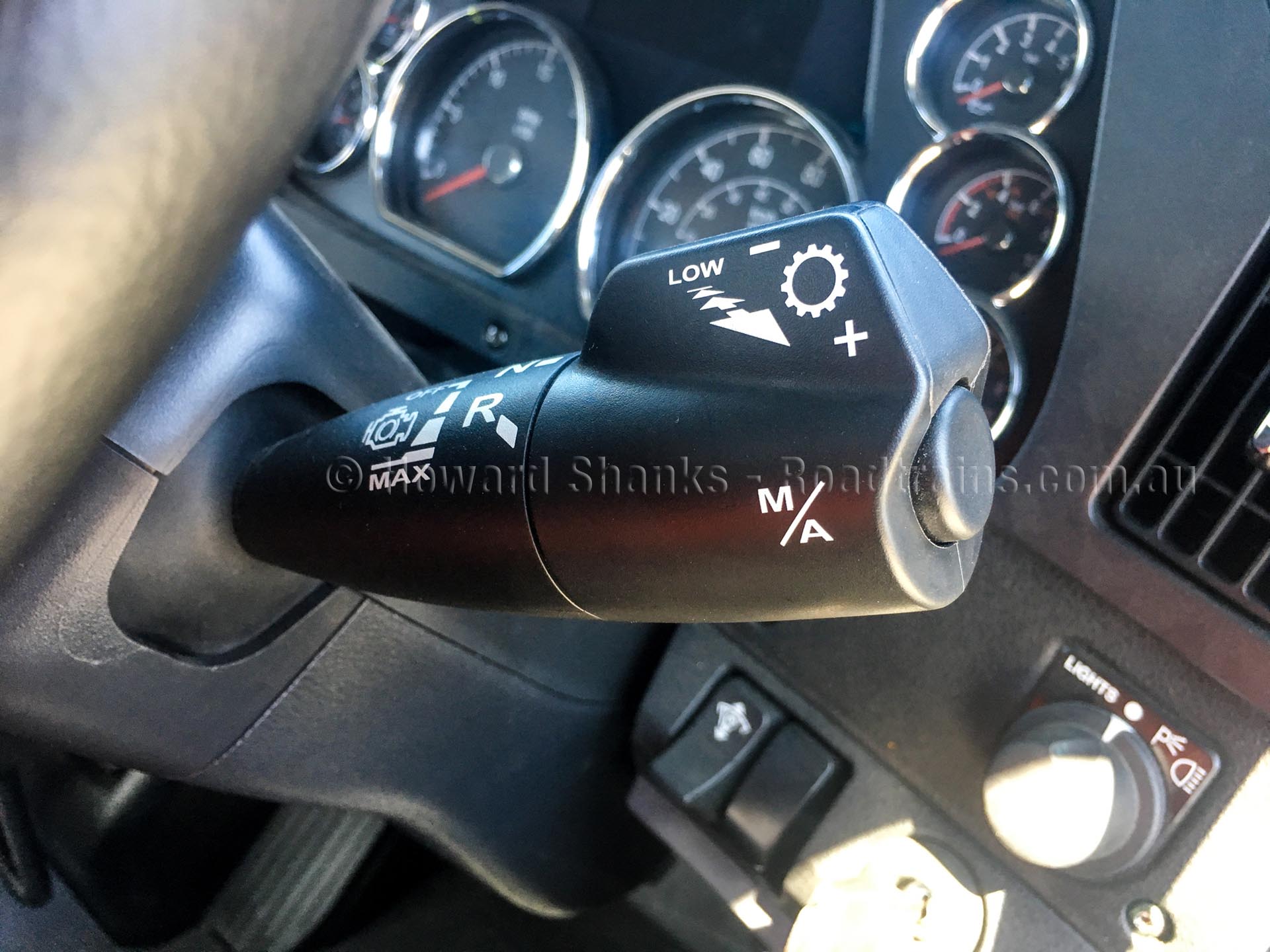 If I thought that second gear was too high for the truck to shift off, I can tap the gear lever downwards to initiate a downshift into first gear. This same procedure was used to instigate downshifts while driving, to initiate an upshift I merely lifted the gear lever upwards. Importantly I could do this while the vehicle was in the “Drive” or auto mode. When I wanted to hold a gear I simply pushed the button on the end of the gear lever stalk to engage “Manual” mode, then tapped it once more to return to auto mode.

The engine brake functionality is easy to use, simply by pulling the lever towards myself the engine brake engages, the first indent activates Stage-1 (50 percent retardation) and the second indent activates Stage-2 (100 percent retardation). There is a third indent and that activates what PACCAR call “MAX” mode, which prompts a down change in the transmission to get the engine revs up into the maximum retardation area. It is a very effective means of washing off a lot of speed quickly. In the congested traffic along Pennant Hills Road, it was extremely useful when a car cut in front of the truck and slammed on its brakes.

To engage “Low” mode, it’s simply a matter of engaging the engine brake then pushing the gear change lever downward and holding it for a few seconds, a small “L” appeared on the outside of the gear change indicator on the dash and the vehicle commenced down changing rapidly. This is a great way to wash off a lot of speed in a hurry without the need to touch the service brakes.

The transmission “Quick Guide” that was left in the truck really made it easy to understand the transmission’s intuitive operation.

Click on the link below to learn how to drive the new Kenworth T410.

One handy feature on the transmission is “Urge to Move” which activates as soon as the brake pedal is released giving a passenger car like feel as the vehicle automatically moves forward. “Creep Mode” is another feature that enables the vehicle to be driven at low speeds with enhanced control.

Power wise the MX13 has a big heart thumping out 1850 lb/ft (2500Nm) torque from 1000 RPM through to 1400 RPM while still punching out 1600 lb/ft (2170Nm) at 1650RPM. The smarts in the engine talk seamlessly to the transmission in what is called optimised gear selection. The transmission selects the appropriate starting gear and makes optimised shift decisions, skip shifting when appropriate, based on grade, vehicle weight, engine torque, and throttle position. In auto mode, the gear shifts are quick, smooth, effortless and predominantly encourage the engine to operate in the economical green band on the tachometer.

The rolling undulating highway provided the perfect opportunity to try out the fuel saving “Neutral Coast” feature. It’s a feature that many transport companies are now demanding. The feature activates when the vehicle is in cruise control and rolling down a gentle incline, the transmission disengages a gear and the vehicle’s weight maintains the speed enables the engine’s revs to drop to idle. The feature is deactivated when the vehicle’s speed exceeds the droop settings or the brake or accelerator is pressed.

There is no interaction required from the driver other than to ensure that cruise control is set for “Neutral Coast” to activate.

When another vehicle pulled in front of the truck, the Fusion Wingman intervened and disengaged the “Neutral Coast” feature.

Visibility wise the T410 has an almost cabover vista out over the short bonnet. The interior of the cabin is like the T610 reviewed earlier and engine noise is minimal in this model. There is ample room in the low line sleeper for a comfortable night sleep with ample storage. The low line sleeper is really suited to a tanker and other applications that have low loads. 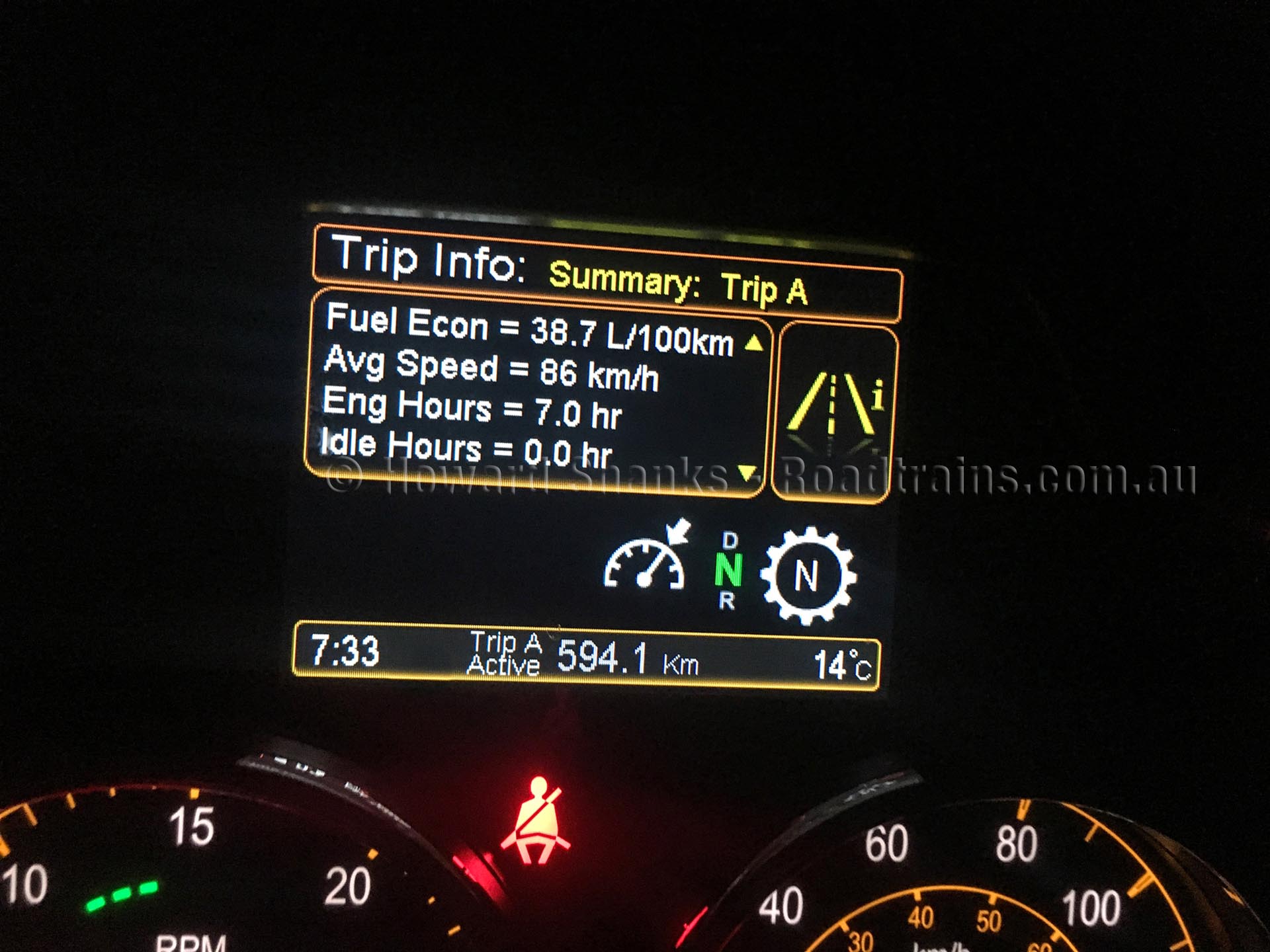 The multifunction driver display on the dash can deliver driver information tips and provide a driver score based on how the vehicle is being driven. According to PACCAR literature, the system coaches’ improvements by showing drivers how to best optimise the truck’s performance by coasting longer, utilising the engine brake, anticipating the road ahead, using cruise control and braking with less force. It’s a function that I tried frequently and was pleasantly surprised to see a large number of green ticks appear on the display momentarily while driving the truck correctly.

I’d been told that the higher the driver’s score the better fuel economy would be, needless to say, I was happy to achieve an overall driver score of 92 percent for the trip.

The overall fuel economy for the journey was 2.58km/l (38.7l/100km) which makes the PACCAR MX powered T410 one of the more economical trucks to operate in the mid to heavy-duty market segment. This is really where it matters to fleet and owner operators, it means the T410 will make it on to the purchase decision table. Sure, the truck needs to be powerful and have all the creature comforts driver’s want, but if the numbers on the Excel spreadsheet don’t add up then chances the company accountant will leave the truck in the new truck lot. 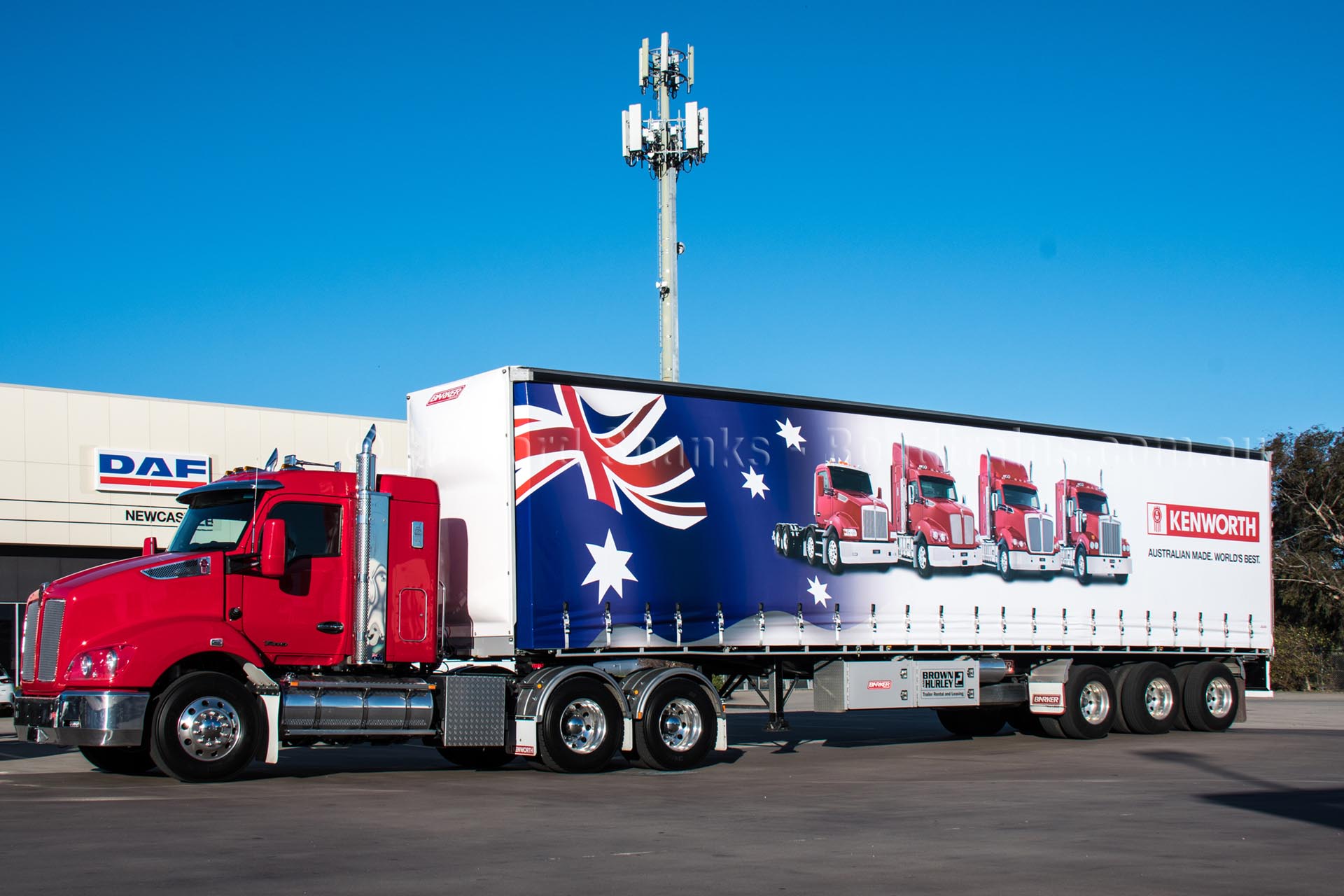 How do the numbers stack up for the new T410?

To date, the numbers are stacking up very favourable for the T410. It certainly ticks the light tare weight box, which gives it a generous payload capability. The PACCAR MX13 engine is a very mature engine and has the reliability and economy runs on the board in both Kenworth and DAF products. Then add in the new smarts like “Neutral Coast” and there’s another tick. It’s this last tick that is probably the most important too and while I’m no mathematician, I’ll endeavour to give a brief example to better explain what I mean about the T410’s economy.

When you consider new truck payments range between $5000 to $6000 per month, the substantial fuel savings from the Kenworth T410 go a long way to contributing to their monthly payment certainly making them an economical transport solution.

As I climbed down from the T410 in Hexham that evening and reflected on the drive, it occurred to me that this model certainly is a multipurpose utility truck. Having the foresight like Sydney Rooster’s, coach Trent Robinson to recognise the potential of putting a versatile player in his line-up is good management that is paying huge dividends for the team. The T410 is the sort of vehicle that can easily fit into a multitude of applications and perform each one equally well. It’s undoubtedly a model very much like Sydney Rooster’s, utility, Mitchell Aubusson, it’s a truck that is well worth consideration. 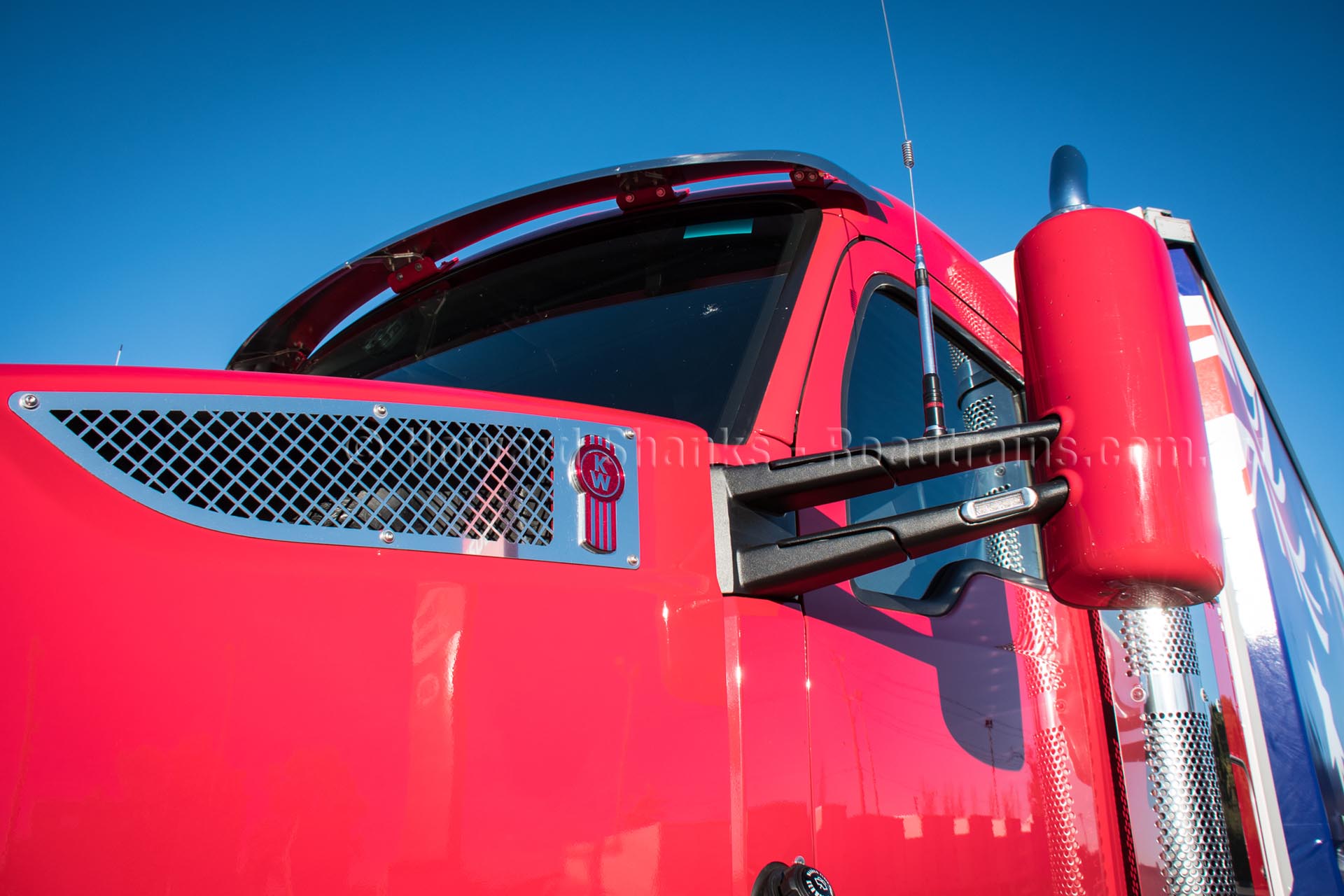 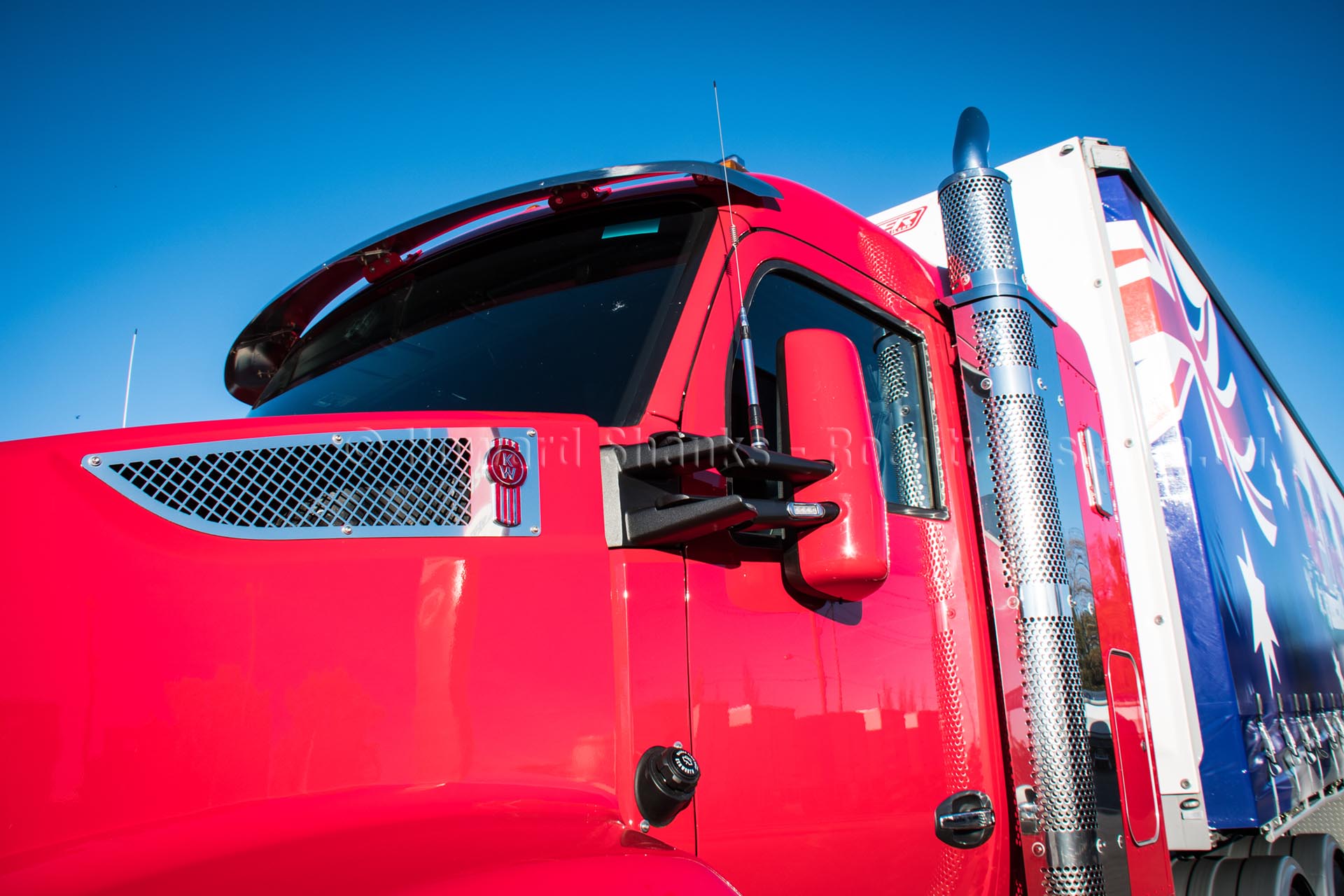