Ahead of the Game! 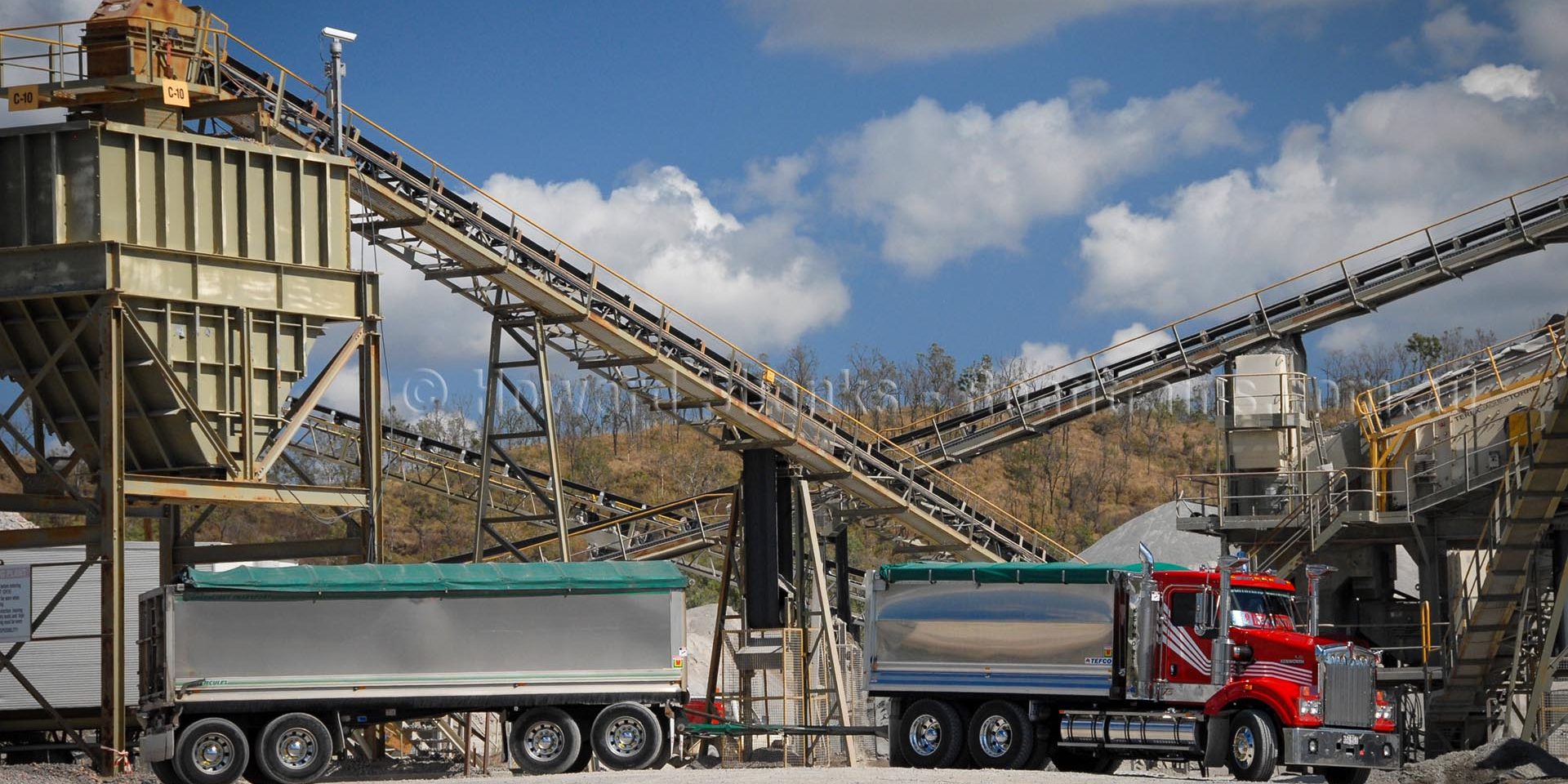 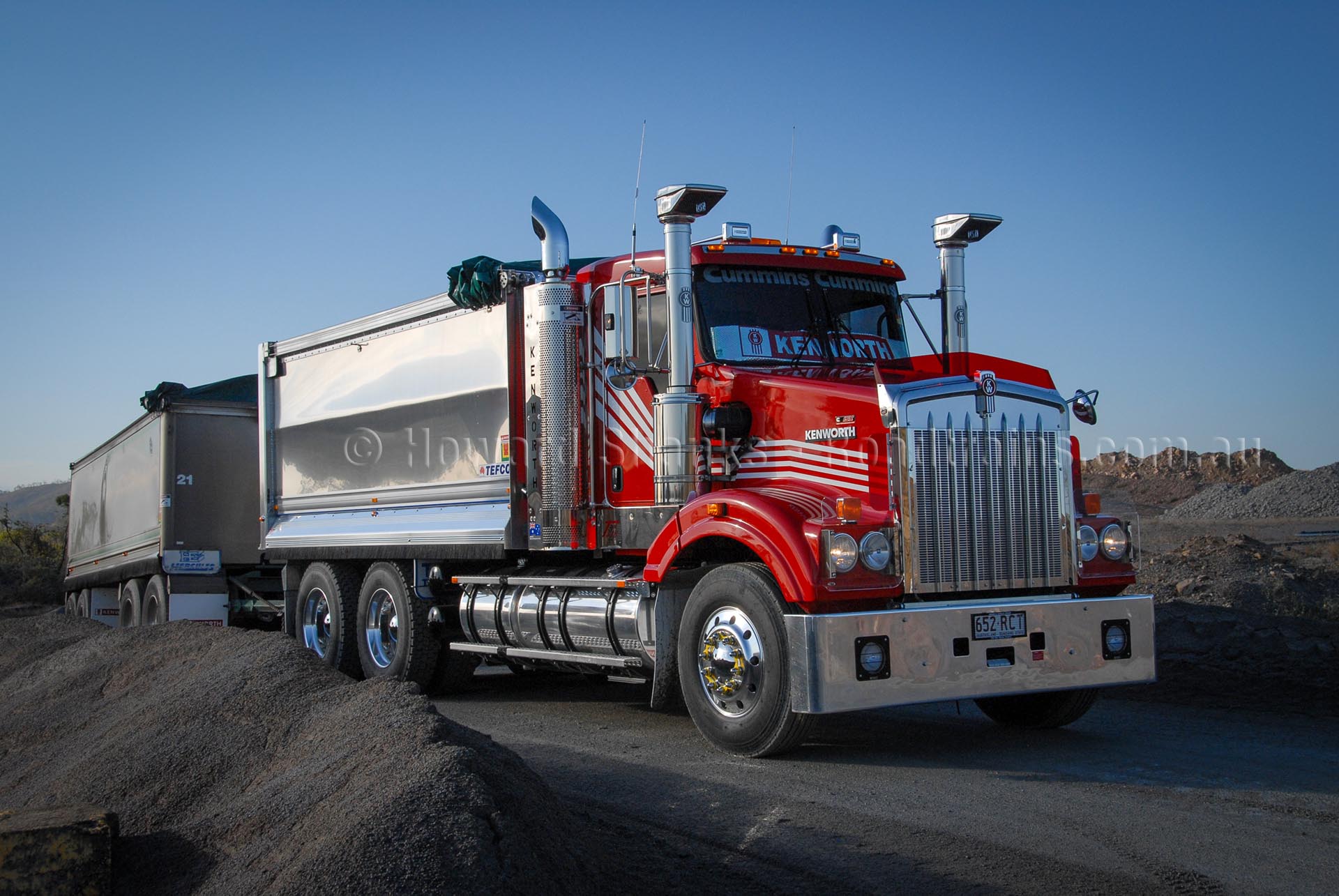 The thumping of the massive jaw crusher at the Townsville quarry was muffled by the flurry of wheel loaders and dump trucks scurrying around the quarry floor, and the loader’s reversing beepers.

At the weighbridge office, a tiny tinted window opened, “are you here to meet Wardie?” the man in fluoro-orange shirt asked.

“He won’t be long, he is on his way back now” he informed. “Have you signed in?” he enquired. I hadn’t, so he instructed me where to find the visitors book.

Daryn Ward, or “Wardie” as everyone calls him arrived a few minutes later, stopped at the weighbridge and introduced himself. He’s been around trucks since he was kid growing up in Mount Isa, where his father ran fuel in triple roadtrains to Outback communities. He’s seen his fare share of rough rugged roads and changed a tyre or two when “it’s 110 in the water-bag”. 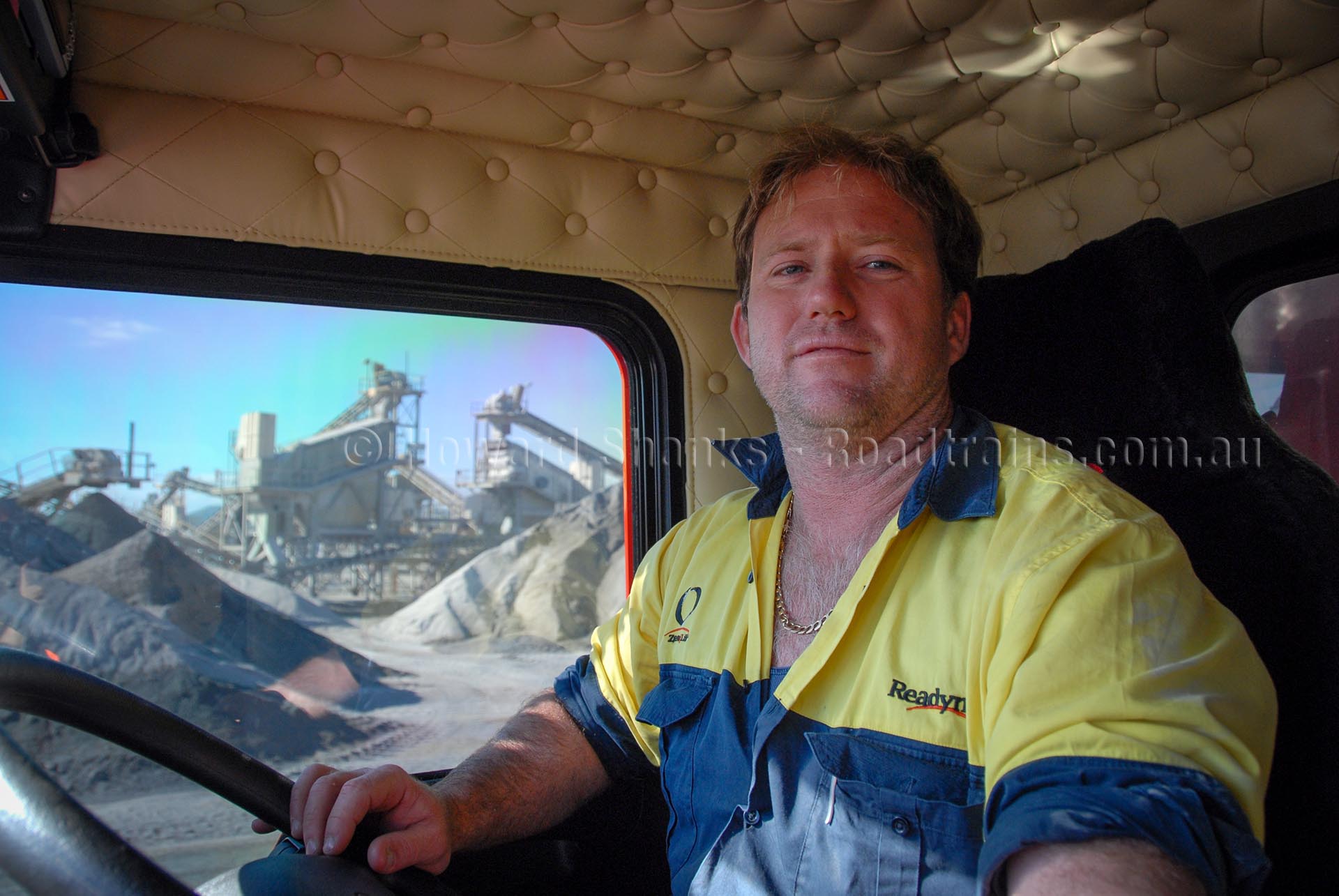 Daryn’s been loyal to the Kenworth product all his life, and has nothing but praise for his local dealer Brown & Hurley Townsville. “Tony Burton, Len Roberts and Phil in the workshop really go the extra mile for me, in fact, everyone there makes you feel part of the family, they really go out of their way to help you,” Daryn began.

He explained he had only taken delivery of this Kenworth T409SAR a little over a month ago and was in the final stages of his Performance Based Standards (PBS) accreditation for it.

“The fact that this Kenworth had the new Electronic Brake Safety System (EBSS) option fitted was one of the big attractions of purchasing this new Kenworth because we could take advantage of the new PBS gains,” Daryn revealed.

“I know how reliable Kenworth trucks are because my old T601 is still going strong and its over ten years old now,” he admitted.

According to the National Transport Commission (NTC) Performance Based Standards (PBS) offer the potential for heavy vehicle operators to achieve higher productivity and safety through innovative vehicle design. These gains are typically not available under conventional ‘one size fits all’ prescriptive mass and dimension rules or the state-based permit system. 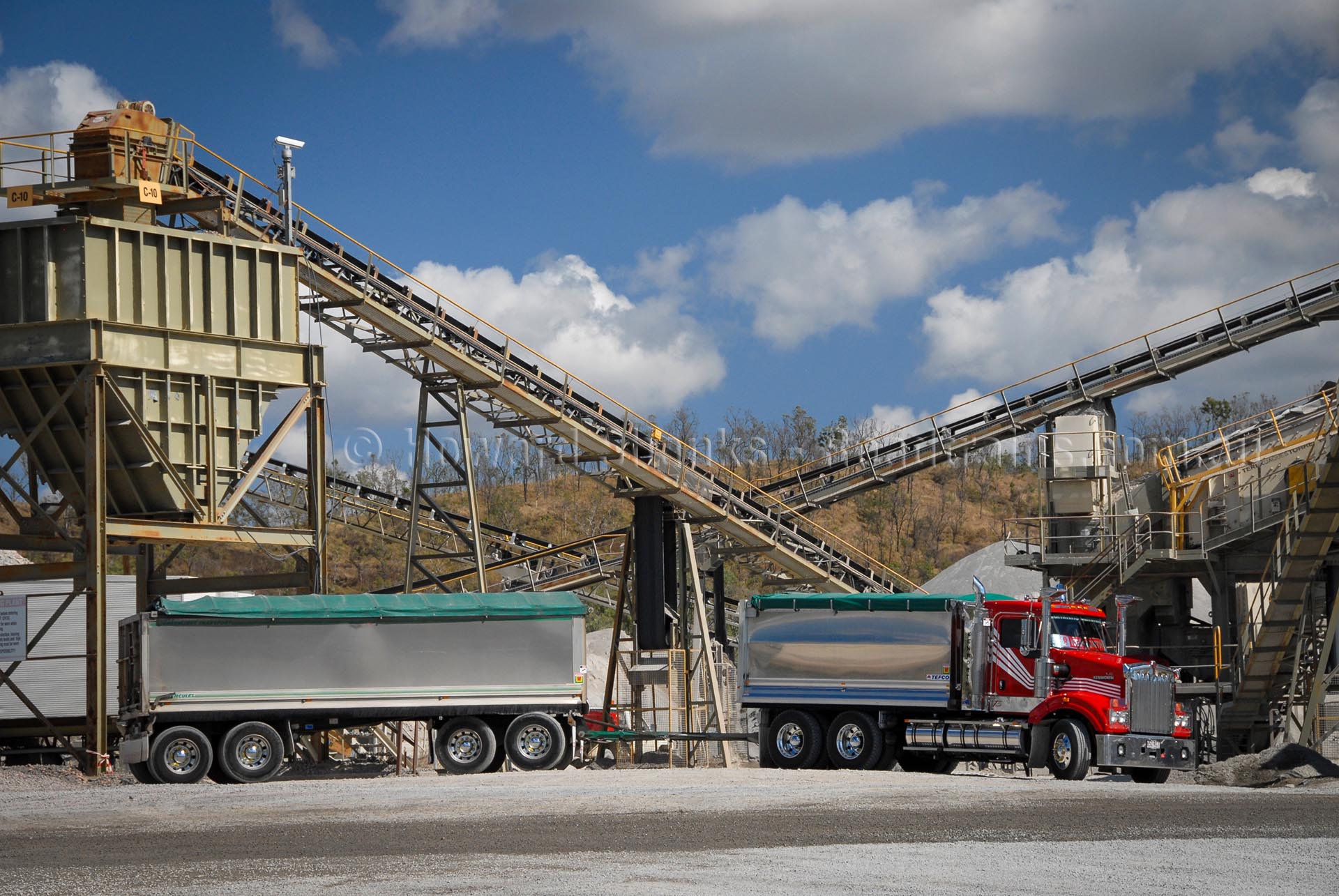 Basically PBS brings a fresh alternative approach to heavy vehicle regulation. It focuses on how well the vehicle behaves on the road through a set of safety, road wear and bridge loading standards rather than how big and heavy it is as in length and mass.

“In other words, PBS governs what a vehicle can do, not what it should look like. PBS sets minimum vehicle ‘performance’ standards to ensure trucks are stable on the road and can turn and stop safely. We have tagged them SMART trucks – because they work smarter,” an NTC spokesperson said.

In Queensland, like the southern states, truck and dog trailer combinations that meet the (PBS) Level Two will be granted access on a permit basis enabling them to carry increased mass (57.5 tonnes, up from 50 tonnes) on the B-double and Higher Mass Limits (HML) network.

Don Hogben, Director of Vehicle Management and Safety for VicRoads said:
“Stringent testing on a number of 7-axle truck and dog trailer combinations have been assessed against the national Performance-Based Standards. The results have shown that well designed truck and dog trailers at up to 57.5 tonnes and 20 metres long are dynamically stable and can pass all the PBS Level Two standards. This is great news for operators of truck and trailer combinations, especially those involved in quarrying and construction.”

In Victoria alone there are in excess of 2,000 truck and trailer combinations transporting a range of quarry products, such as cement, sand, rock pre-mixed concrete and asphalt. 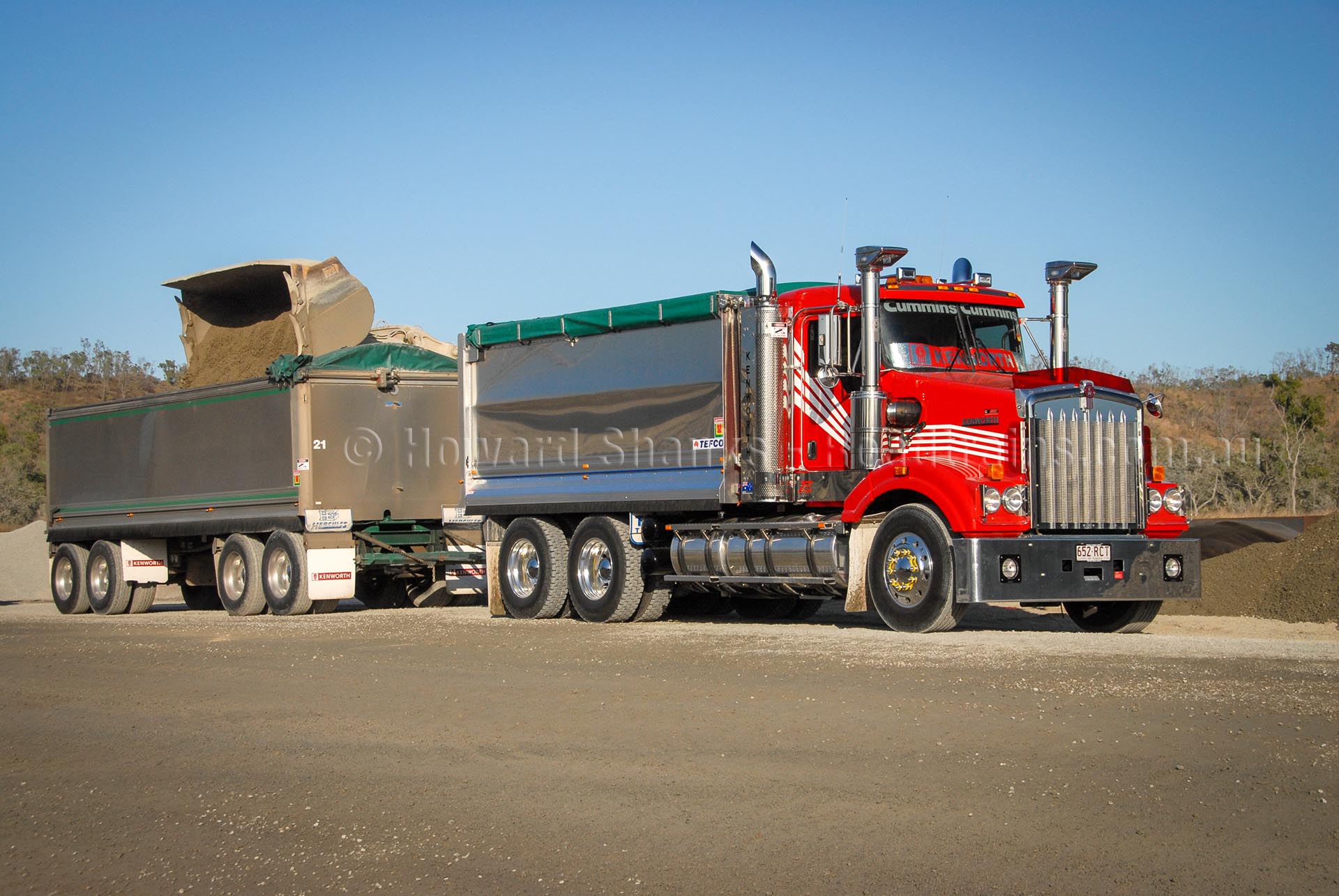 Philip Lovel from the Victorian Transport Association added:
“The increase to 57.5 tonnes is a 15% productivity increase for the quarry industry. Over time this will mean a reduction in the number of trucks and trailers on the roads for the same freight task, which will not only reduce congestion but will also see a decrease in carbon emissions. Furthermore these vehicles will be safer as they’ve passed a PBS assessment.”

“The 2011 Kenworth range proves yet again Kenworth’s ability to develop and deliver trucks that best fit Australian applications, meeting or exceeding the needs of our customers with versatile, reliable and most of all productive solutions,” said Andrew Hadjikakou, Director Sales and Marketing for PACCAR Australia.

Daryn also cited the improved cabin appointments and ergonomics such as the new doors with standard electric windows and central locking along with the wider padded arm rests with integrated window and mirror controls as welcomed additions.

“Safety is paramount in our business,” Daryn explained. “To comply with the quarry’s safety requirements, we’ve had to fit additional components like the wide-angle mirror to the left hand side of the bonnet, which reduces the blind spot up the left side and front of the truck. We’ve also fitted, an auditable warning, which sounds if the doors are open, and the park brake released. I even have warning sticker on the exhaust stacks which looks back-to-front when you look at it straight on, but it is the right way round when you look in the driver’s mirror.”

“All the trucks carry first-aid kits, fire extinguishers and we even have a special hammer beside the driver’s seat designed to smash glass,” he added. 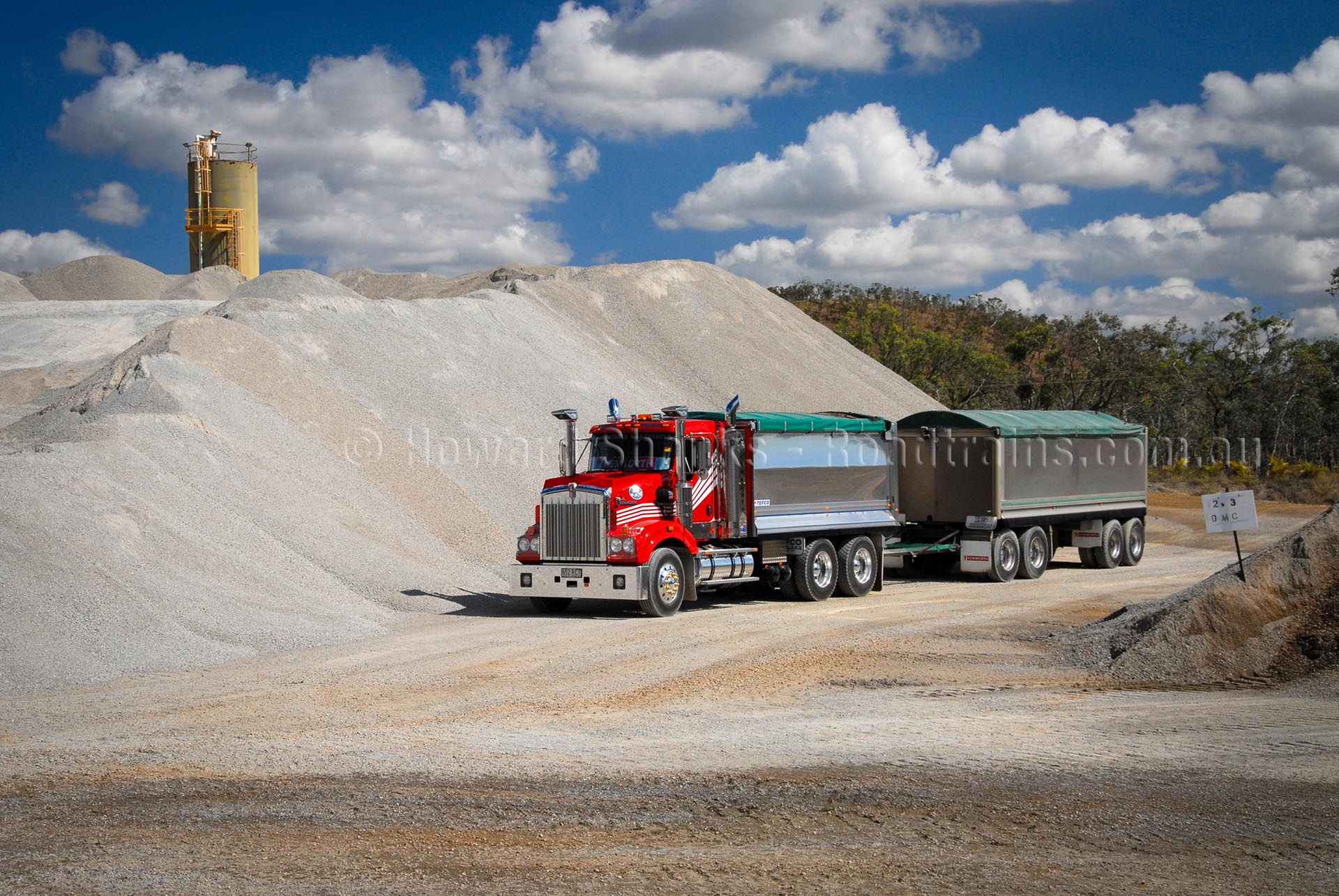 The rollout tarps are controlled by a remote control, similar to one that’s used to open a car door. “They (quarry management) don’t like anyone climbing on loads anymore, even to roll out a tarp. Now we have these remote controlled tarps that roll themselves in and out. It’s a pretty easy job nowadays,” Daryn smiled.

Under the hood of this T409SAR is the ADR 80/03 compliant Cummins engine rated at 550hp that develops 1850lbft torque. Transmission is Eatons’ 18-speed coupled to Meritor RT46-160 rear axles with cross-locks in both axles riding on Kenworth’s Airglide 460 rear suspension.

“The versatility of this T409SAR another big advantage to us, that’s because it is rated up to a 90-tonne roadtrain, I can also pull an additional 4-axle-dog trailer on roadtrain routes which increases productivity yet again,” Daryn revealed. “Also the visibility and maneuverability around job sites of the T409SAR is exceptional when you consider it is really quite a big heavy duty specked truck.”

“I really love the look of the ‘SAR’ but from a business point of view, I have to leave my emotions behind and focus on the productivity gains to stay ahead of the game when it comes to specking my trucks,” Daryn concluded. “The fact that the T409SAR turned out to be the ideal model for our application is just a bonus.” 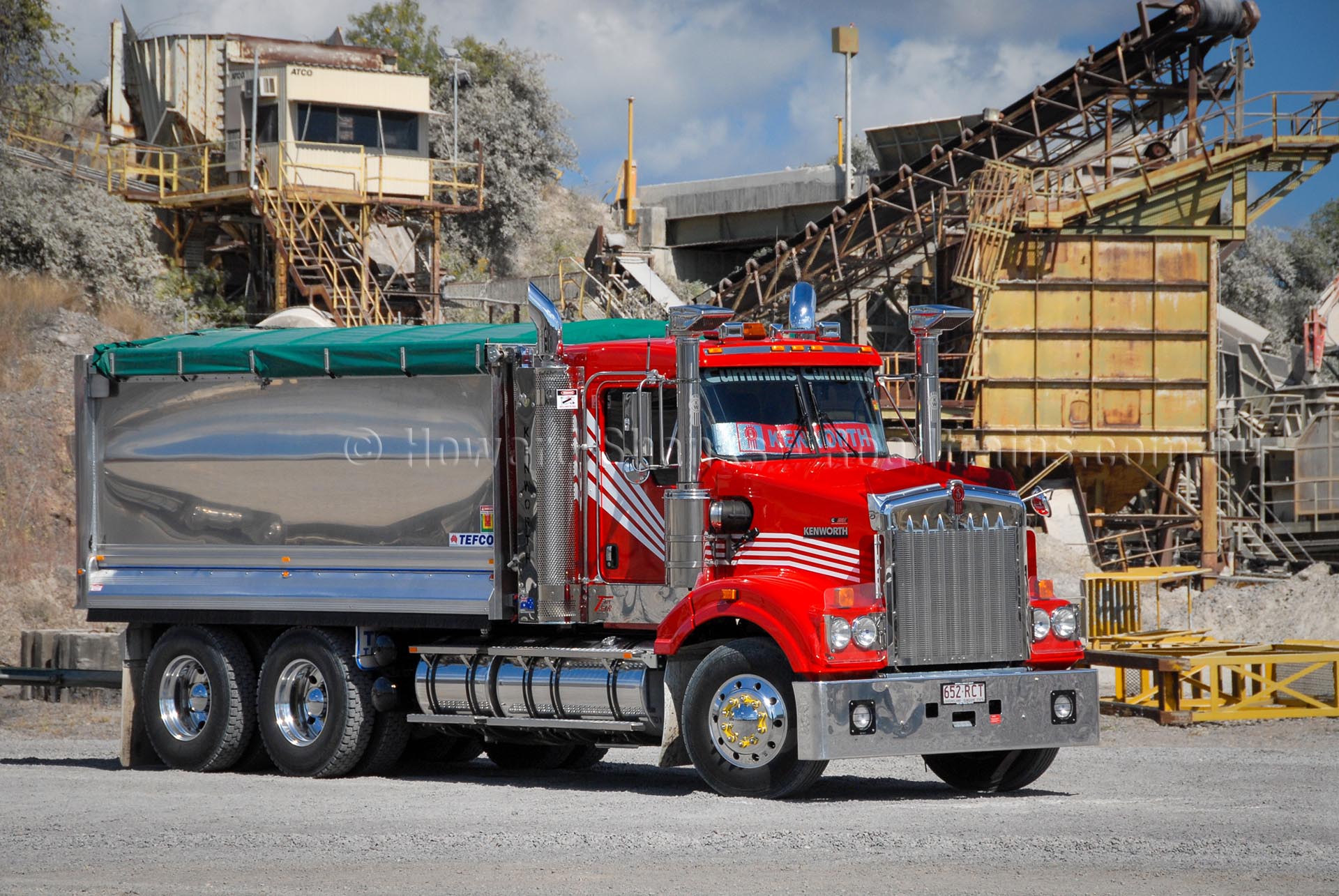