One question I often get asked is, how much worth is in a Kenworth? To answer this question, I took a ride in 15-year-old T950 on a heavy haulage run to Port Latta. 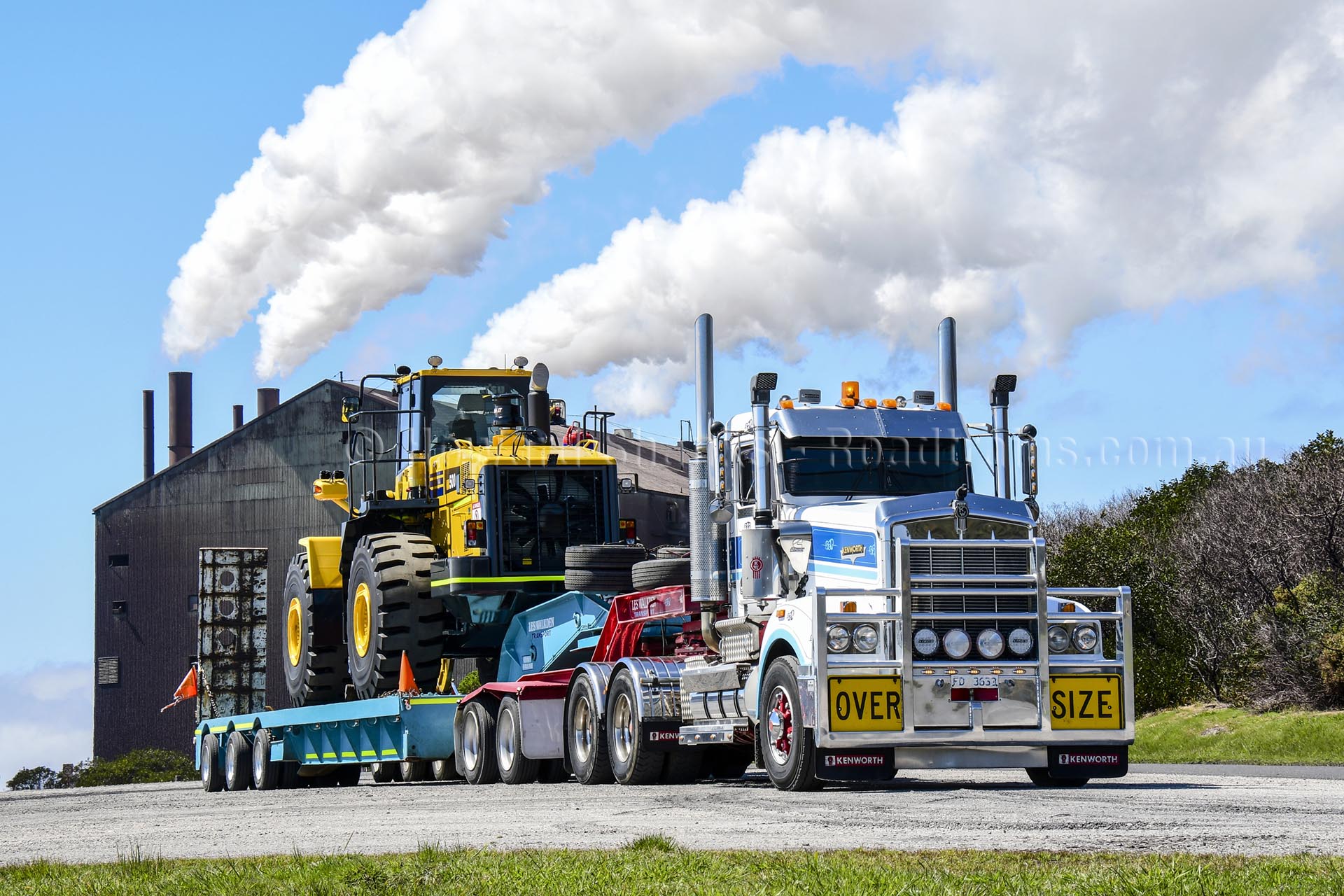 In Launceston early Monday morning the thick blanket of fog that rolled in from the Tamar River during the night had lifted by the time Craig Wivell finished chaining down the new Komatsu WA 500 wheel loader to the three rows of eight Drake Swingwing low loader behind the smart-looking Kenworth T950 he drives for Les Walkden Transport.

The operation is unique in that concentrated iron ore slurry is pumped 83 km from the mine at Savage River to the pellet plant at Port Latta via a 229 internal diameter pipeline which takes approximately 14 hours. In mining terms, this project is considered a long-life mine with the current predicted lifetime of the mine extending to 2034. 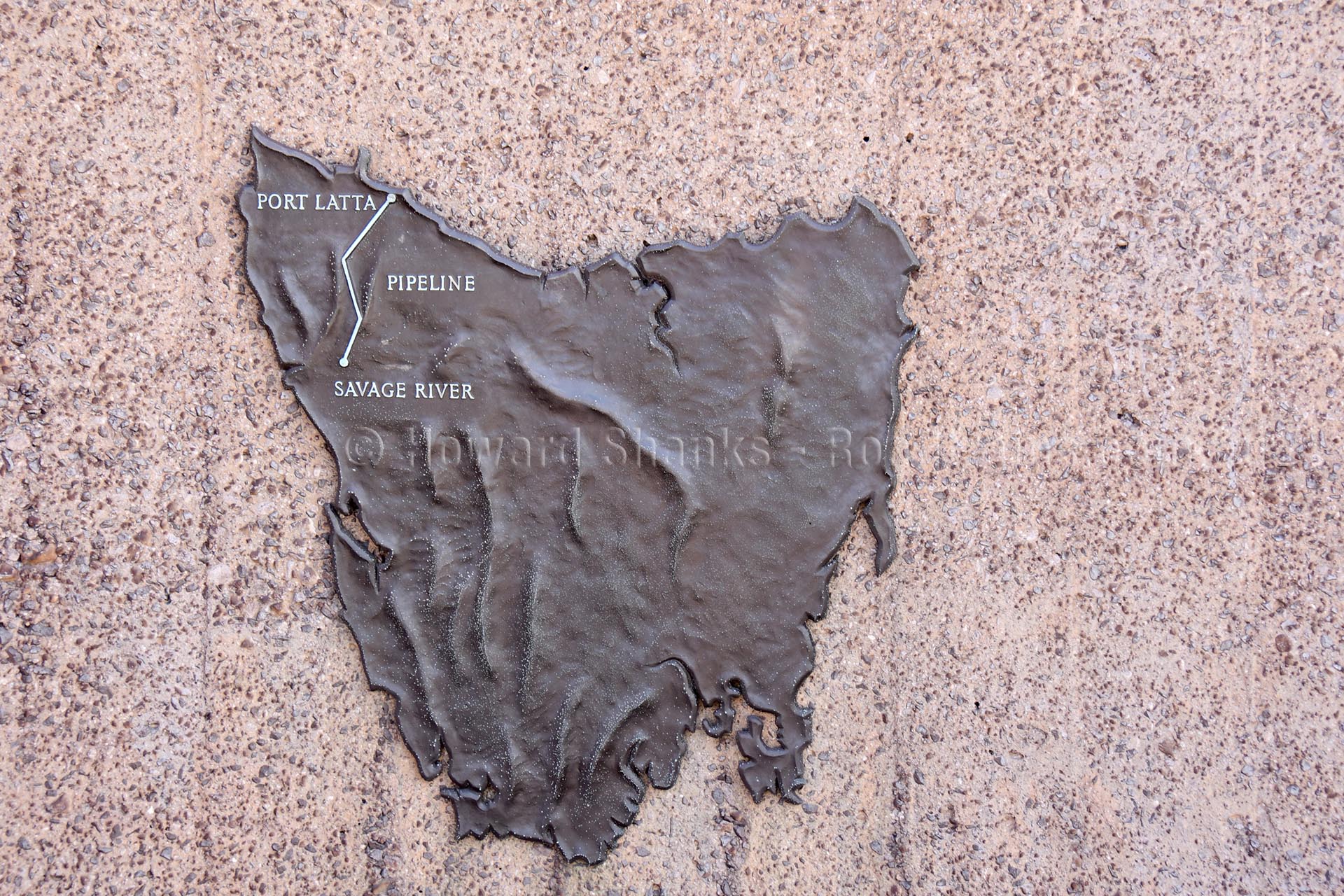 At the Port Latta plant, the cleaned concentrate is pressed into pellets using bentonite as a binding agent. The pellets are then fed into one of five vertical shaft pellet furnaces where they undergo heat-induced processing for approximately 4.5 hours. The finished pellets are screened to grade excess coarse and fine material then transported by conveyor to the stacker-reclaimer where the pellets are stockpiled to cool wait for shipping.

This new Komatsu WA500 is one of three that feeds slurry into the processing plant and is replacing one, which Craig will reload onto his three rows of eight Drake Swingwing low loader and return to the Komatsu dealership.

Craig’s Kenworth is an old school T950, with a Gen-II Cummins that he reckons has been one of the most reliable engines he’s ever had. “Apart from regular maintenance, we’ve hardly touched it. It’s really been a great engine,” Craig said. “Its got plenty of power for this type of work, today with the WA500 that weighs around 30 tonnes plus the weight of the dolly, low-loader and truck all up today the gross weight is over 60 tonne.”

When asked about the economy. “Considering the weight and terrain we travel, it’s pretty good,” Craig replied. “If I can get 1.6km/l or better, then I’m pretty happy.” 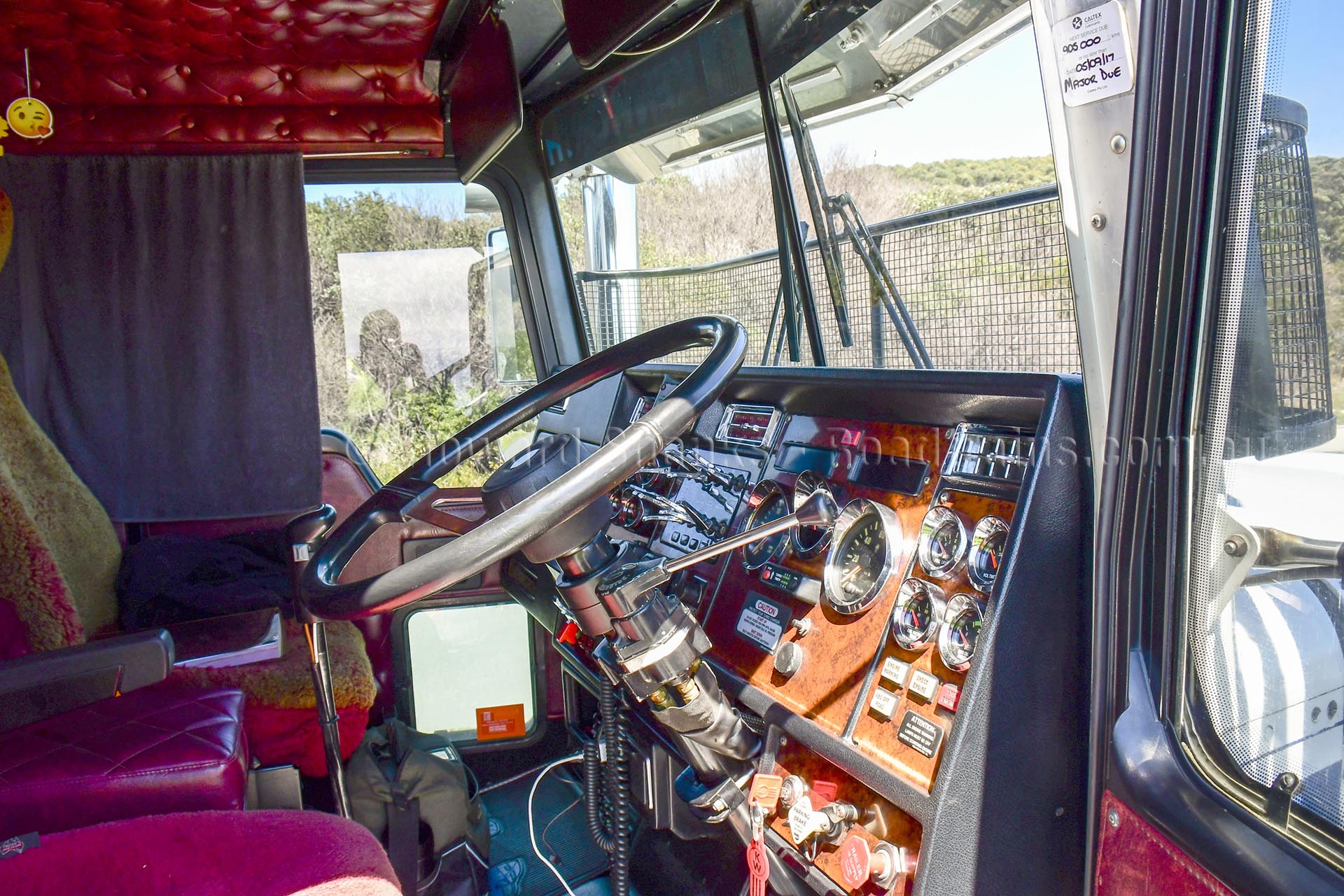 Glance at the Speedo

A glance at the speedo and take note of the kilometres this T950 has clocked up, (and incidentally, those numbers are on their second lap), since it hit the road back in the early part of this century and its testament to the quality of Australian built Kenworth. The doors open and shut just like a new truck. The interior is showroom condition, which in no small part is a credit to Craig’s meticulous attention to detail.

Craig has added some personal bling to this T950 to give it a touch of class, and it’s a regular participant at many of the Tasmanian truck shows.

Upfront of the Kenworth T950 is a highly polished King Bars’ Warrego 4-post FUPD complete with “Oversize” signs and covers as well as a row of traditional and LED driving lights.

Craig says the life cycle of the Kenworth product is something that few if any manufacturers can get close too. “I can park this next to a new T909 and looking at the two trucks it would be hard to pick which truck is almost 15 years old and done over a million kilometres, Craig said. “It just comes down to keeping on top of your maintenance and operating the equipment correctly. There’s no reason why we won’t get another 15 years out of this T950, sure we’ll have to rebuild the engine, and re-race the transmission and diffs but that’s just maintenance,” Craig added. 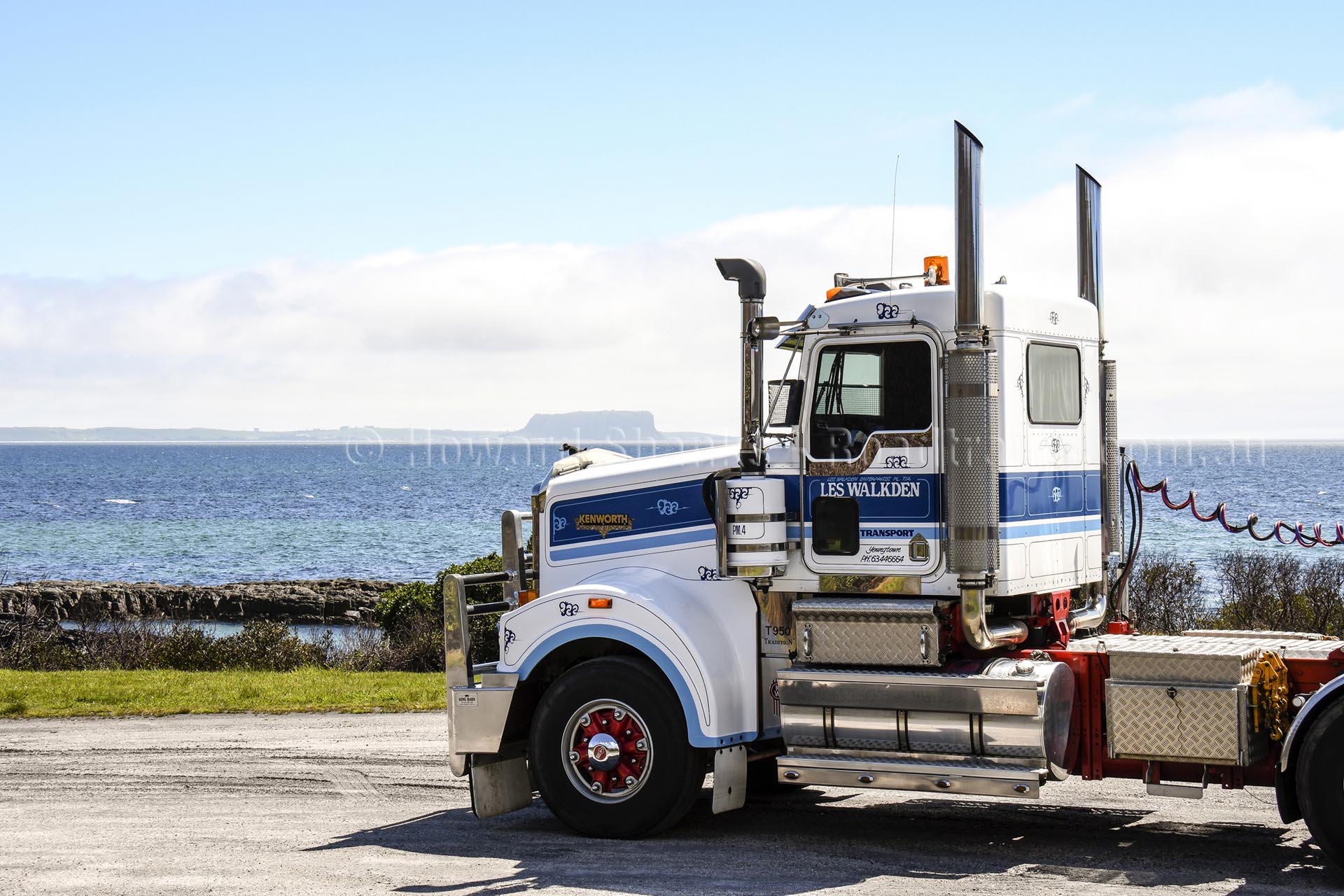 The Cummins under the hood punches out a healthy 600 horsepower and runs that through an Eaton 18-speed transmission finally running out to the ground via Meritor RT50-160GP axles all mounted on a Kenworth’s six rod rear end.

When the Gen-II Signature engine was released, it was said that the dual overhead cam design allowed Cummins engineers to optimise both engine and braking performance. It was suggested that one should look at the engine front on, from the timing cover and note that the left-hand camshaft drives the high-pressure fuel injection system which is massively robust to handle pressures up to 2,380 bar (35,000 psi) for future emissions regulations. The right-hand camshaft operates the valves. It also incorporates a set of lobes dedicated to operating Intebrake, the fully integrated engine brake system. This enables the engine to deliver more braking power than horsepower, without additional stress.

According to the spec sheet these Signature engines retard at an awesome 600 hp, which is unprecedented for an engine braking system. The bottom end of the new engine sees a crankshaft that has been extensively computer-modelled for weight reduction and lower rotating mass, which benefits response. The right-hand camshaft also drives the fuel pump that supplies the fuel rail. The pump is one component of the Integrated Fuel System Module, which mounts to the side of the head.

Craig agrees, citing the Cummins’ engine braking as the best he has ever experienced. “Operating in the hilly conditions around Tasmania and with the weights, I’m towing I need all the braking power I can, and the Cummins has plenty of that,” he adds. 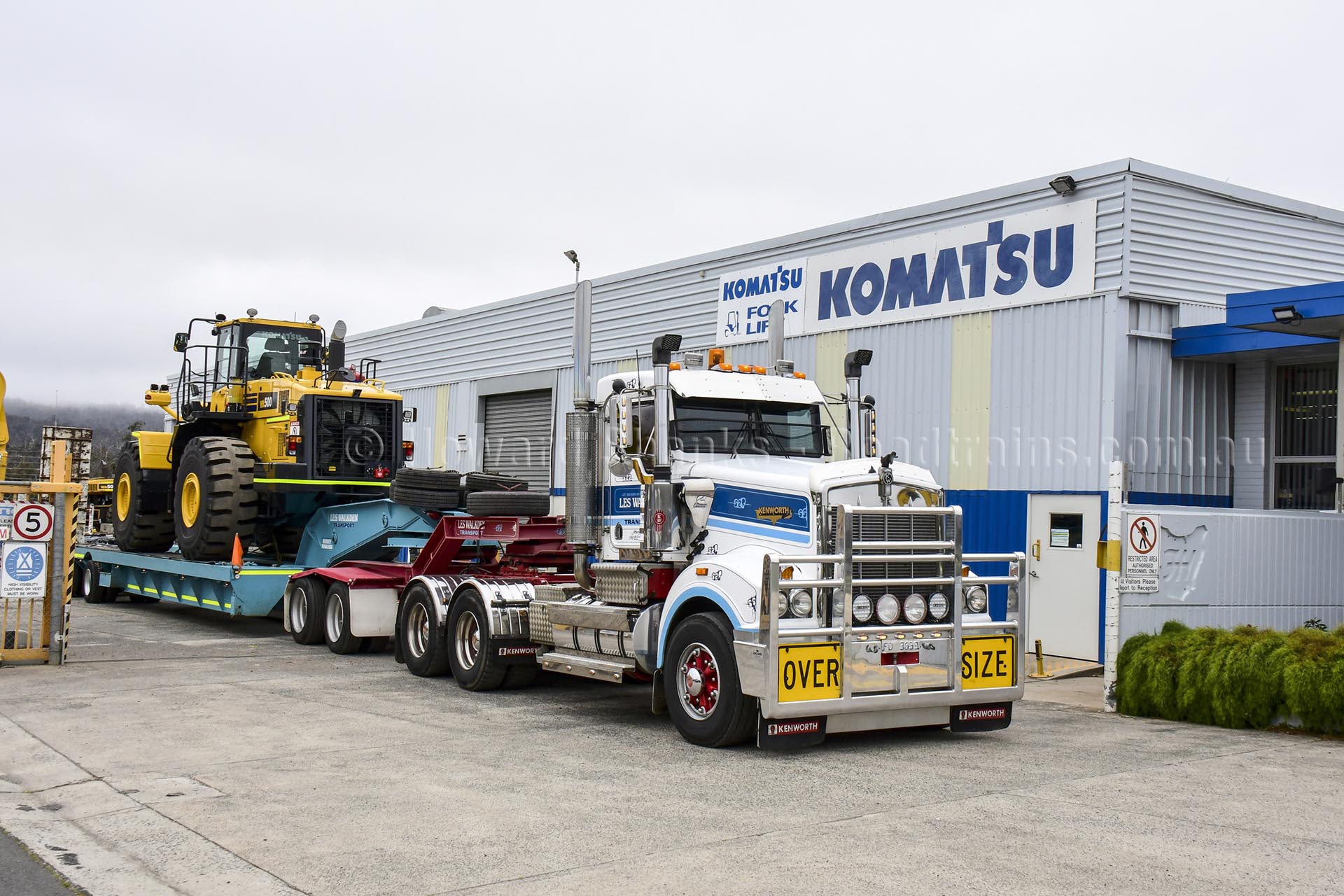 Leaving Komatsu in Launceston with the new WA500 loader.

For Kenworth, the T950 model was one of their most successful and popular models, so much so that when they released a limited edition production run of 75 units in 2015, they sold out in less than 24 hours.

The T950, with its set forward front axle, was introduced in 1992 and originally modelled on the iconic SAR. It has everything that comes to mind when you think of a traditional American-style long bonneted truck.

As well as looking the part, the T950 was designed to operate in almost any application from heavy-haulage, livestock to logging, whether pulling a single trailer or a triple road train.

The truck’s high mounted cab set back from its engine meant there was no engine intrusion into the cabin, allowing for easy all-round access to the engine and exceptional visibility over the sloping bonnet.

During its 15 year production run the T950 built up a considerable fan base and is remembered fondly with other legendary Kenworth classics like the W-Model and SAR. In fact, Slim Dusty immortalized the T950 in his song “Mechanised Swaggy”. 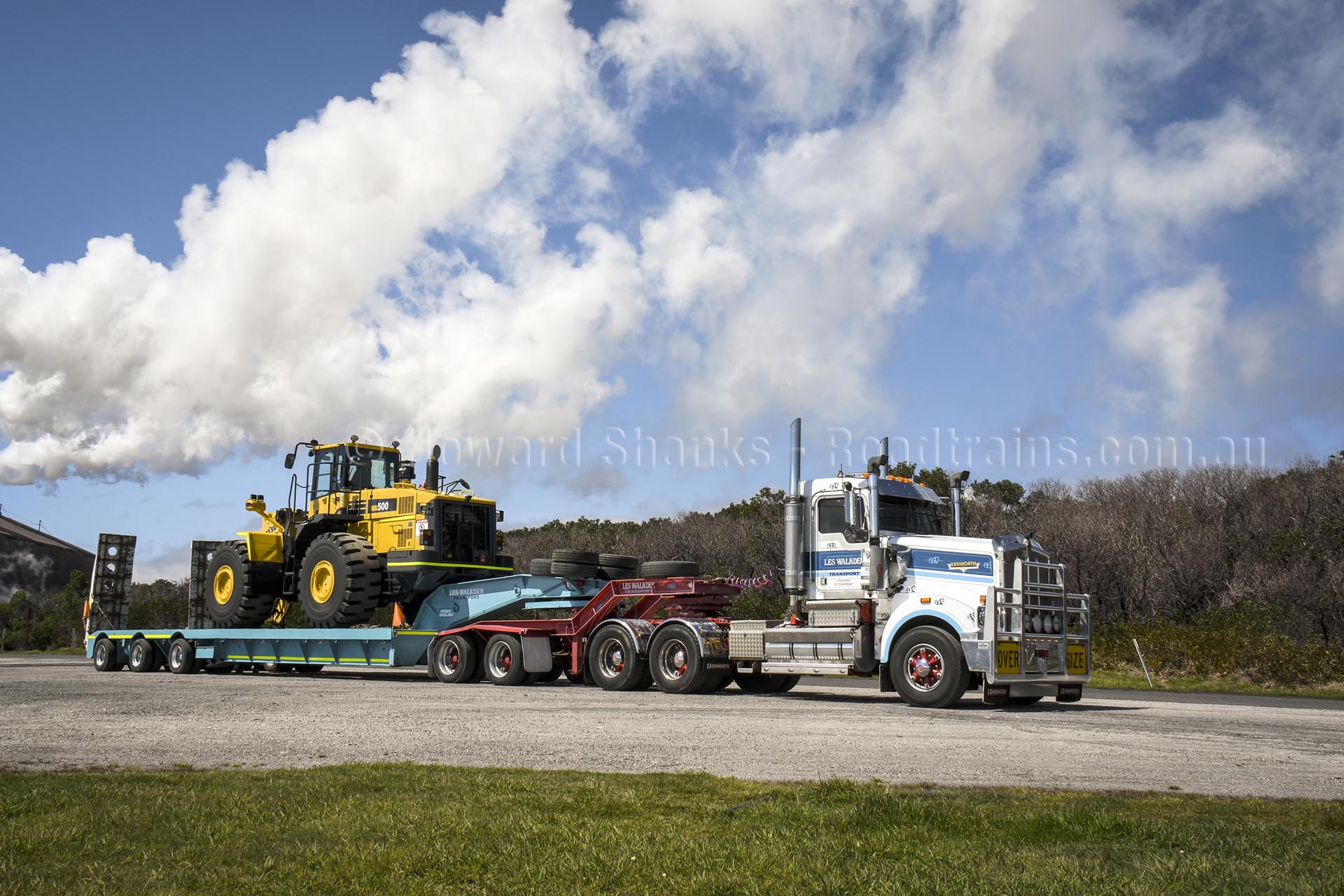 End of an Era

One question that is often asked, “if it was such a popular model, why was phased out in 2007?”

Increasing the size of the radiator on the T950 in a vertical direction basically turned it into a T904 that consequently evolved into a T908 for the 2008 model year. So the decision to phase out the T950 model was imminent. 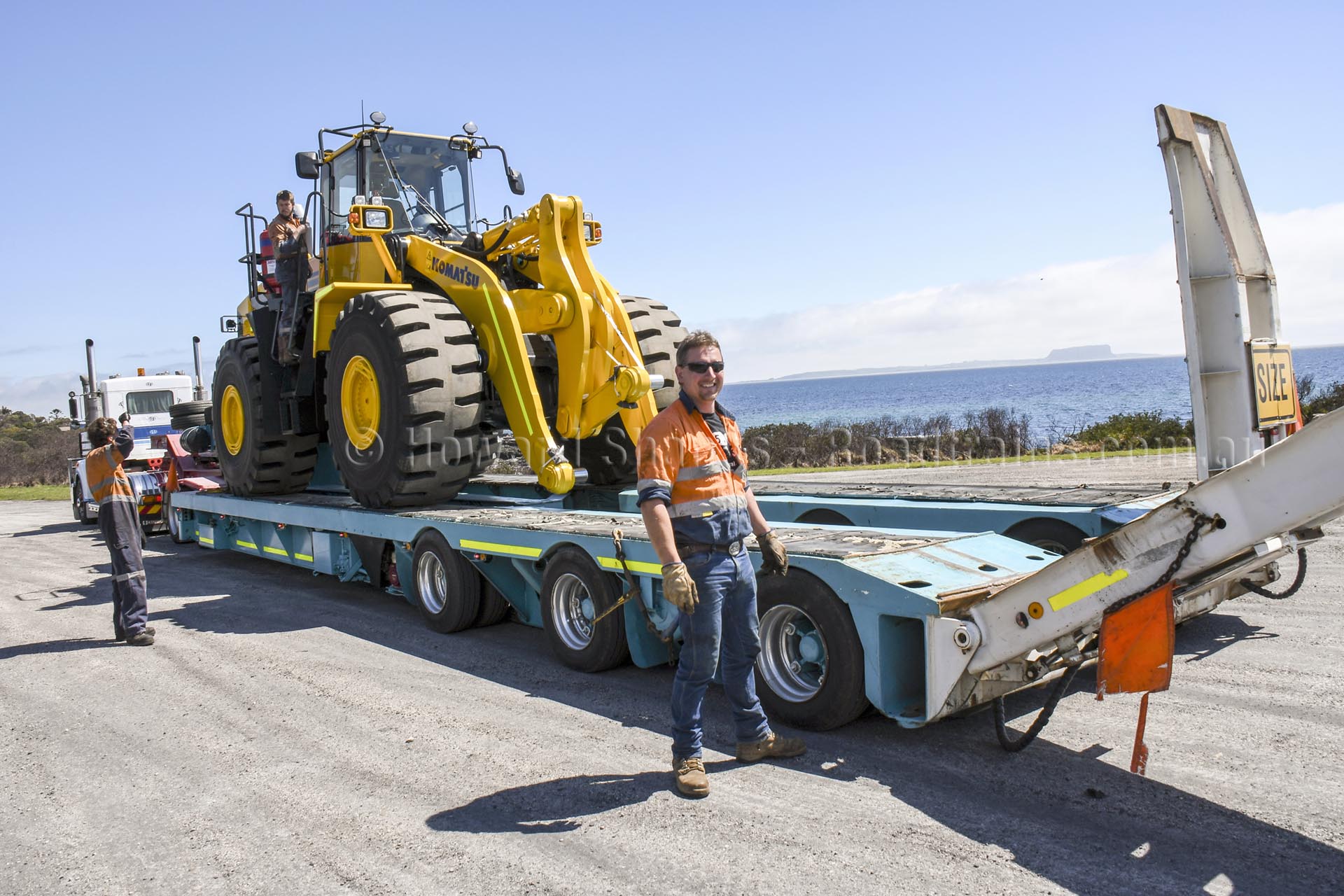 The Drake three rows of eight Swingwing is in their hydraulic widening low loader range and boasts an impressive range of standard features. At the top of the list is stainless steel hydraulic tubing, hydraulic controlled ramps, level deck open at inner rear all driven by a 5.5 pull start hydraulic power pack.

On the operational side, there are two horizontal spare tyre carriers, drop legs, dunnage trays and lockable toolboxes, a rear push point and LED lights. The entire low loader is grit blasted and painted in 2-pack paint.

The deck is 2.5 meters wide in the closed position and opens to 4.27 meters using Drake’s unique “Swing Wing” widening system. The gooseneck features two kingpin positions, one for when it is connected to the 2×4 dolly and the other when it’s connected to the prime mover only.

The trailer’s suspension has hydraulic height-adjustable that enables Craig to lower the deck height for loading and unloading and raise the deck to safe travelling height.

Today with this Komatsu WA500 he is running the deck height at 900mm.

“The swingwing trailer means I can widen the full deck to any width between 2.5 meters and 4.27 meters, depending on the machine I’m carrying. It means the machinery is stable on the deck and the trailer’s wheels are directly under the load which gives additional stability to the load,” Craig explained.

Roughly three hours after pulling out of Komatsu’s Launceston dealership Craig wheeled the Kenworth T950 into the Port Latta facility where the crew were keen to fit the new bucket and put the new machine to work. It

Craig reckons he gets several calls a week wanting to know if the T950 is for sale. Some of the offers are so substantial they almost match the original purchase price of the truck when it was new 15 years ago. So the answer to the question asked at the start of the story, yes is there is obviously there’s a lot of worth in a Kenworth. 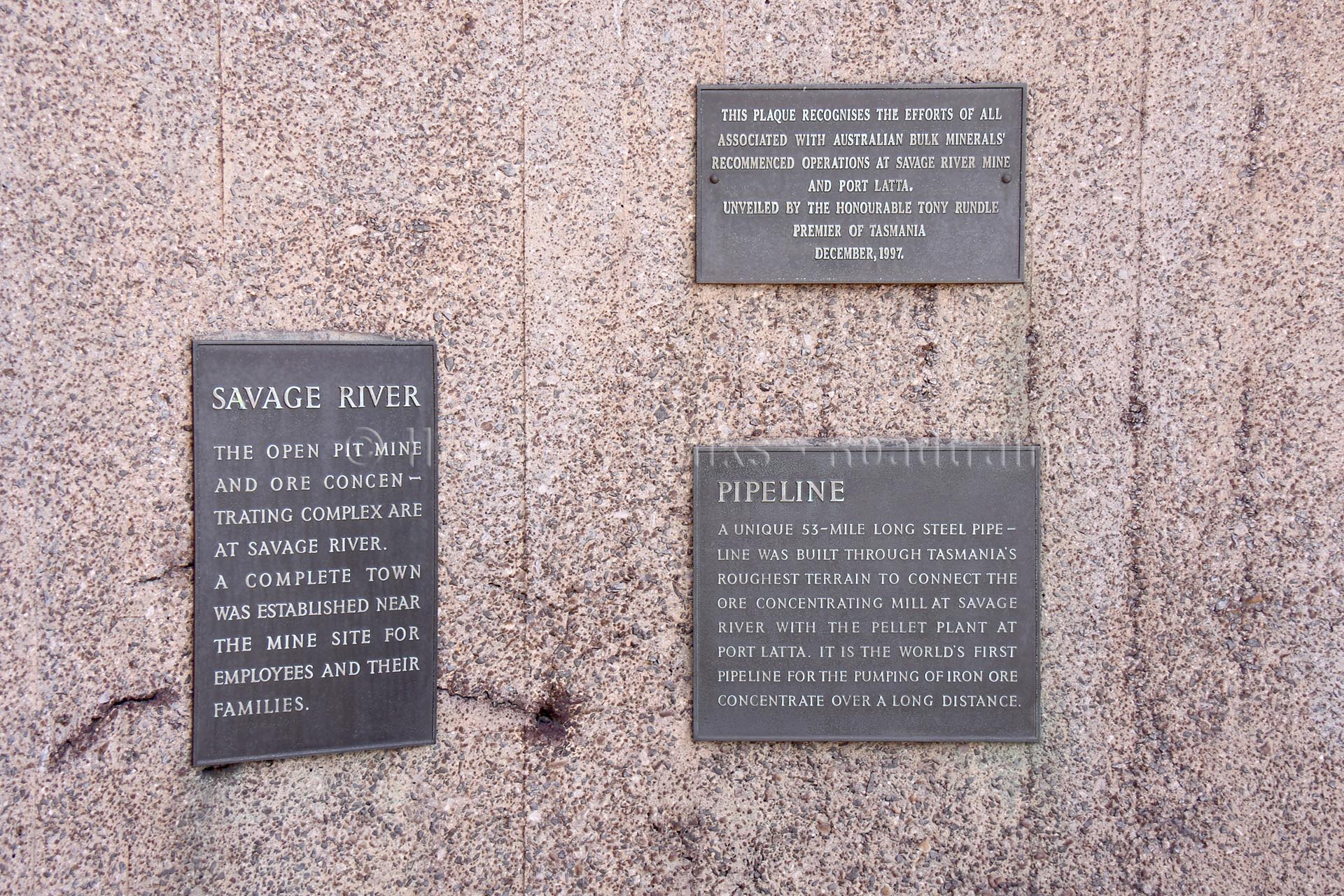