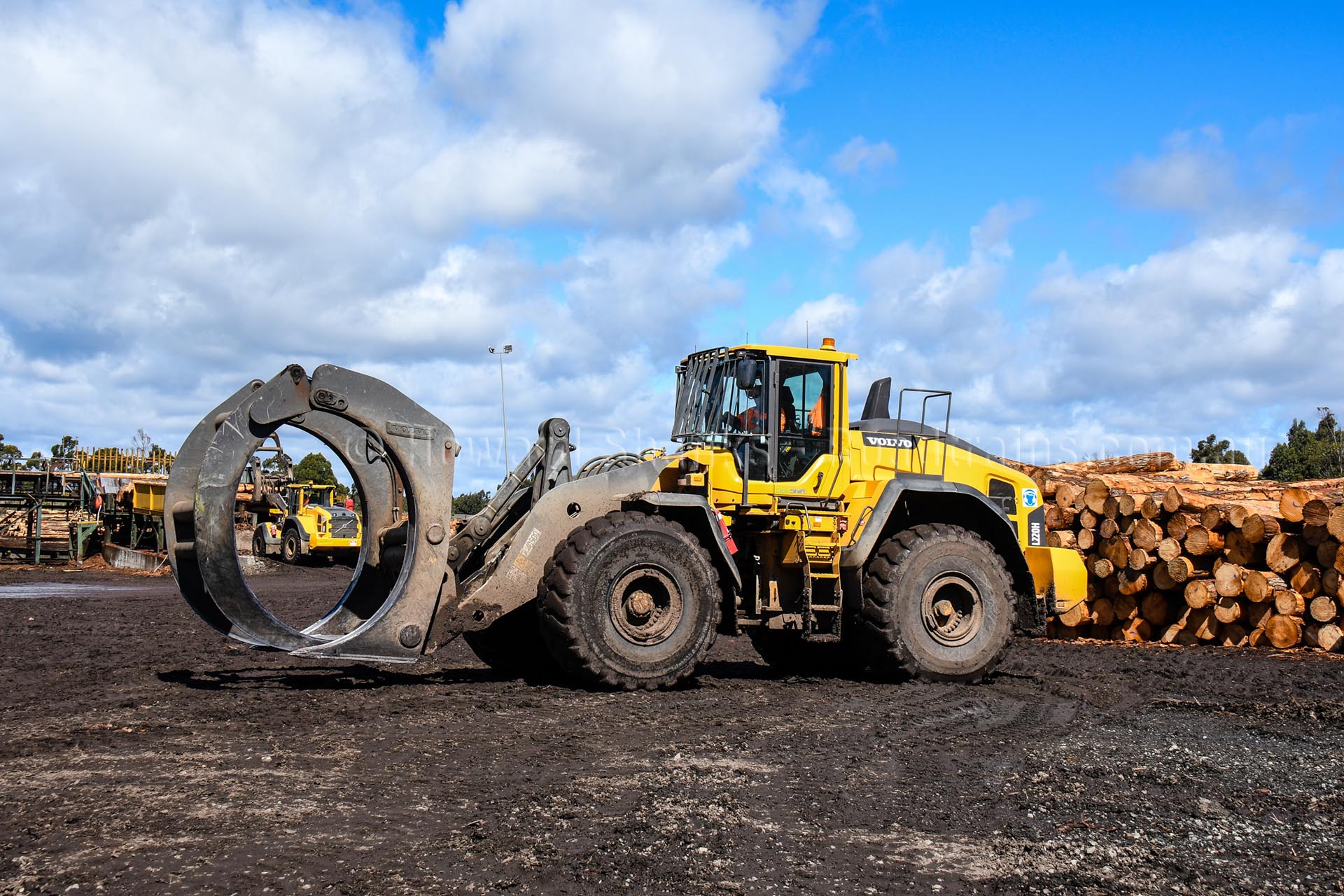 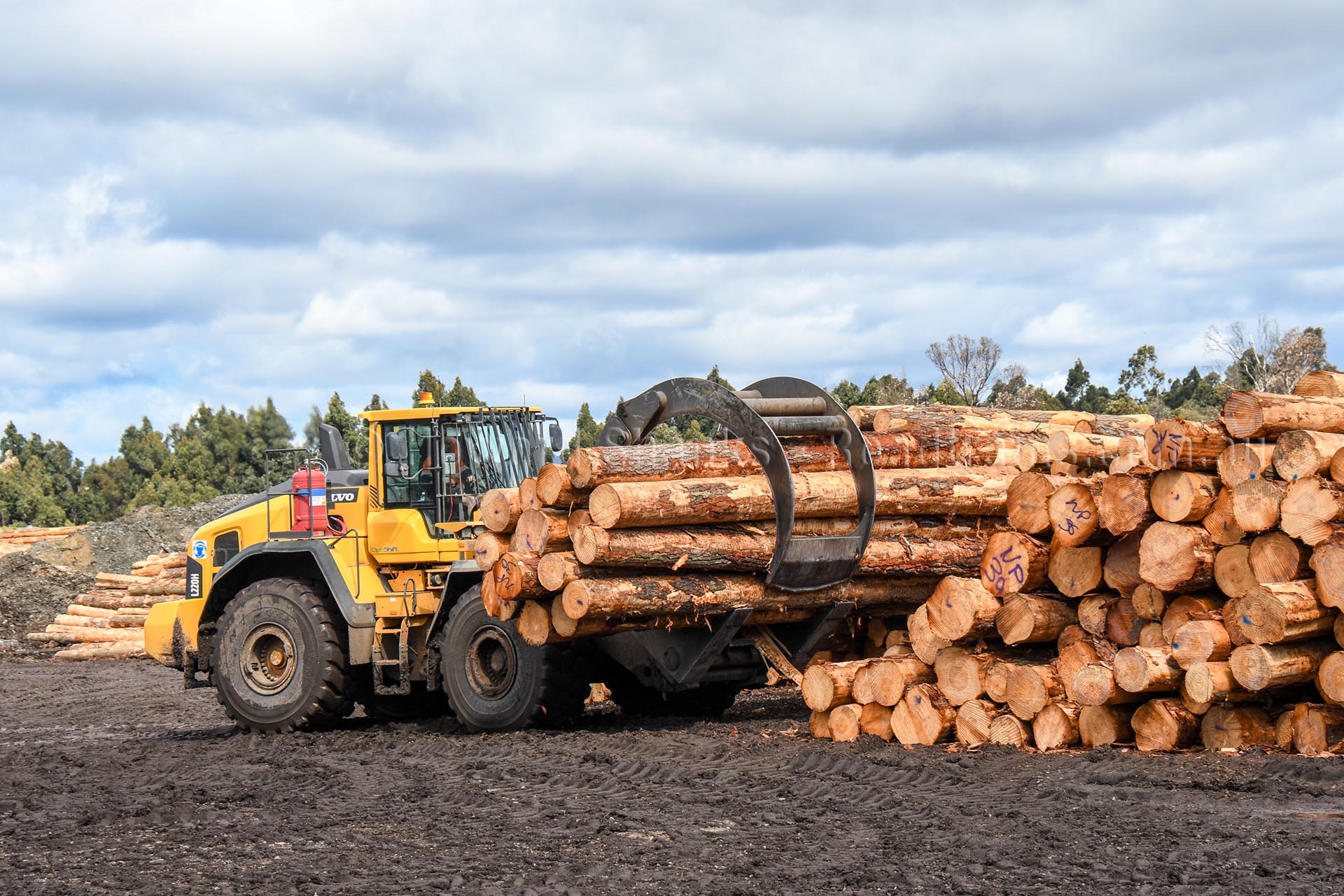 Today timber in Australia is in high demand.

At Timberlink’s Bell Bay sawmilling operation, Log Yard Supervisor, Dean Smith believes that adopting new technologies and specifying components according to need rather than tradition, will lead to higher profits for the company, despite timber prices almost remaining static for the last decade, due in no small part to cheaply imported products.

Smith monitors the processes and movements in the log yard with the sharpened pencil of an accountant. Combining a broad knowledge of the sawmilling industry and his understanding of production practices with consideration for future demands, he configures his loaders to safeguard the highest interests of the company.

“We found the CJD team to be very proactive in working with us to agree on the specification of the L220H and L180G and checking all the details were correct to ensure the machines would do ‘what it says on the tin’. The overall package was very competitive too so all in all this prompted us to choose Volvo once again.” 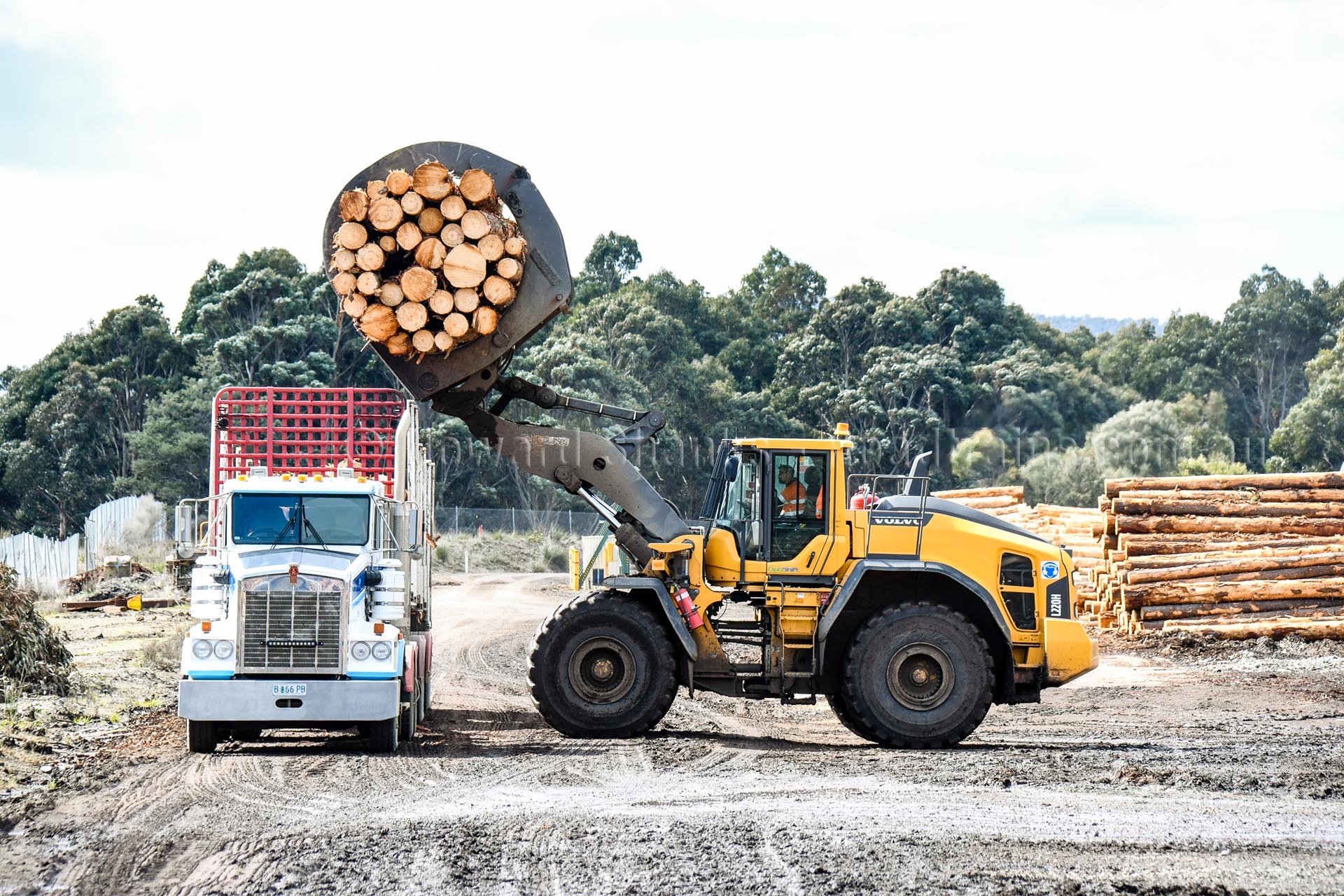 Dean Smith and his team are no strangers to operating Volvo equipment, having previously run an L180C wheel loader in another sawmilling operation, where they were impressed with the reliability and economy of the Volvo machine.

Specifying the L220H as the main loader in the log yard increased productivity considerably because it is more than capable of lifting an entire bay of logs off a truck in one lift.

“The power of the L220H gives us greater efficiencies through increased productivity and fuel economy gains because the machine isn’t working beyond its capability,” operator Scotty Harrison said. “We can unload and stack a B-Double load of logs in under eight minutes with either machine.

“We’re very pleased with our turn around time for unloading, on average, from the time a log truck arrives at the weighbridge, they can be unloaded and back on the weighbridge within 15-mintues,” Scotty added. 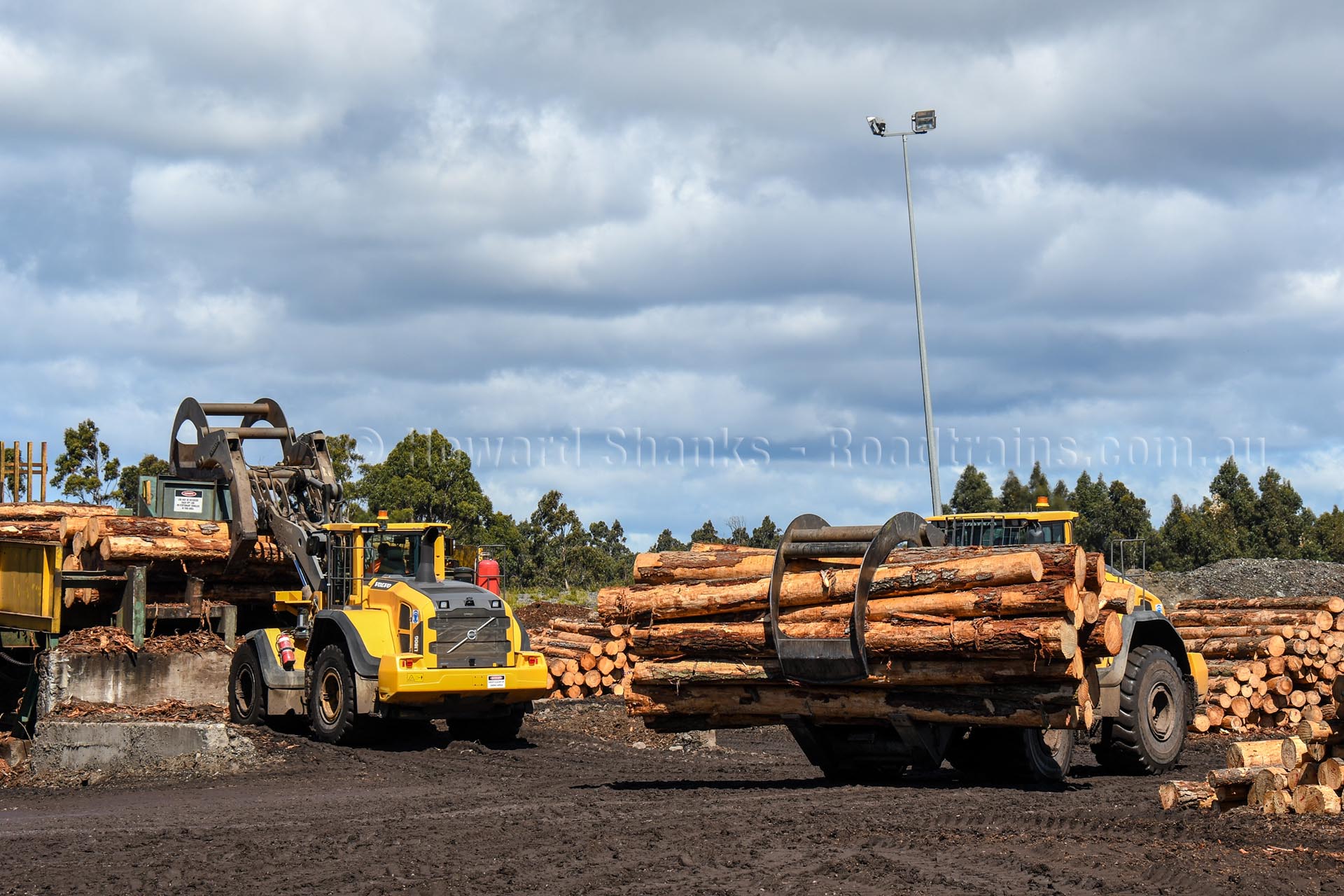 “The L180G is used as a secondary machine in the log yard,” Dean explained. “Its more than capable of keeping the mill fed with fresh logs and equally at home unloading log trucks. Being a little smaller gives it the agility to perform other tasks around the mill and the simplicity of the quick hitch attachments makes swapping from the log grapple to a bucket a quick operation and adds to the machine’s versatility.”

The new L220H model is powered by a 13-litre Stage IV Final engine (373hp) and benefits from Volvo designed and manufactured driveline components, including the company’s Optishift system with torque converter lock-up and reverse-by-braking features – all designed to deliver better fuel economy.

In addition to the productivity gains, the Volvo wheel loaders also have an ROPS/FOPS operator’s cabin with a fully adjustable suspension seat. The cab is fully air conditioned, and all critical machine functions are displayed on an LCD screen located within the operator’s field of vision.

Operator Scotty Harrison cites the rear view camera as a great asset and safety feature especially with the addition of the blue light for night work. 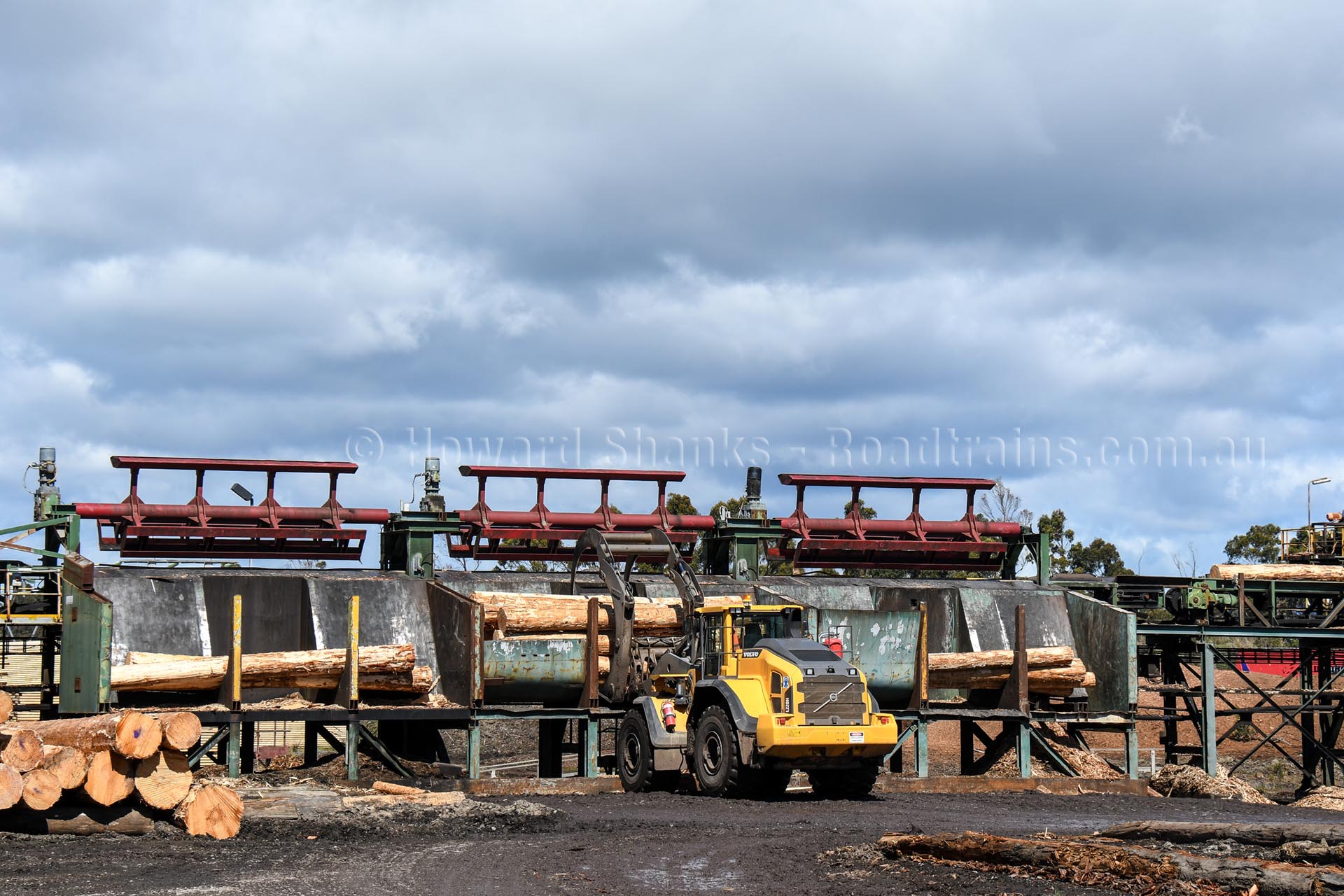 He adds that the dash panel clearly displays all the vital machine information including fuel and oil levels along with warning messages even in bright sunlight all at a glance without hindering forward vision.

Volvo’s load-sensing hydraulics are said to be at the forefront in artificial intelligence, by supplying power to the hydraulic functions according to demand, further lowering fuel consumption. The powerful hydraulic system ensures fast response for shorter cycle times while delivering smooth operation through superior control of both the load and the attachment.

Volvo’s unique eco pedal applies mechanical push-back force when the accelerator is used excessively and engine RPM is about to exceed the economic operating range. This encourages the operator to ease off the throttle, reducing fuel consumption.

“I normally run the loader at 1400 RPM around the log yard, but increase the revs to 1600 RPM when going up the ramp with a full grab of logs,” Scotty explained. “I’ve found this gives good economy while still achieving maximum productivity.”

For ease of operation, Timberlink specified the optional, multi-functional joystick, which gives their operators simultaneous and precise control of the hydraulic functions. Forward, reverse and kick-down functions are included on the console.

Timberlink specified the optional Boom Suspension System (BSS) that enables faster and more comfortable work cycles to further increase productivity and safety while at the same time extend the machine’s life. That’s because Volvo’s unique BSS absorbs shock and reduces the bouncing that occurs when operating on rough ground such as a log yard.

Scotty Harrison believes that the cabin environment is one of the best he’s experienced. “It’s certainly one of the more spacious cabs in this class of loader yet all the controls are sensibly positioned within easy reach. It is also very quiet in the cabin and the smooth ride means I’m not exhausted at the end of the shift. One thing these Volvo loaders do well is remove the dust in the air,” Scotty revealed. 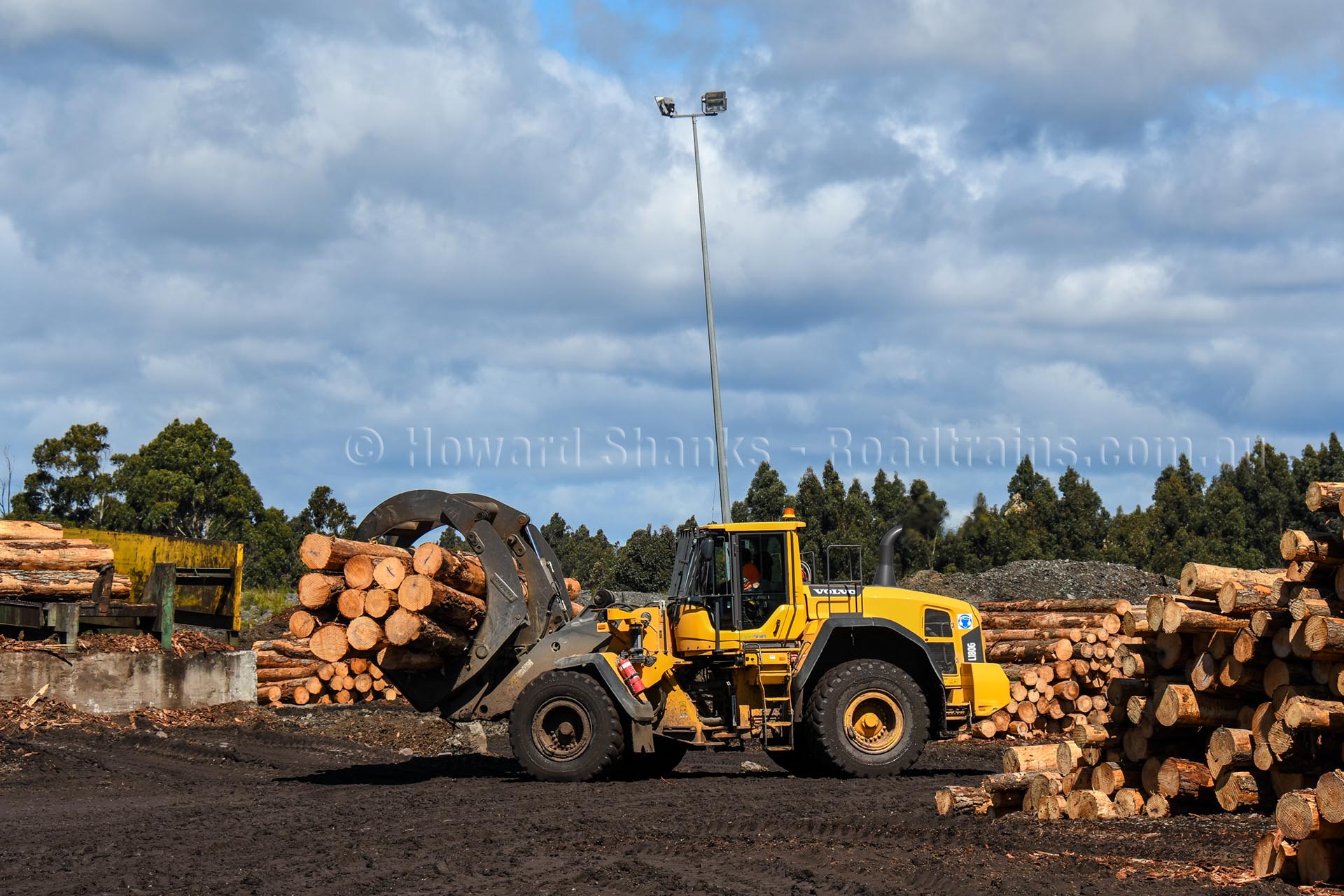 The engine bay features a hydraulically driven reversible cooling fan that is electronically controlled to regulate the temperature of the vital components. It automatically activates only when it’s needed further reducing fuel consumption and noise. The reversible functionality which blows air in the opposite direction, allows for self-cleaning of the cooling units.

Both the front and the rear axle feature an axle oil circulation feature that allows the axle oil to flow and cool inside the axle protecting vital components.

“Our two Volvo loaders are enrolled in the CareTrack program and CJD monintor the machines via satellite,” Dean Smith explained. “They (CJD) know how each machine is going at any given time and when servicing is required which allows us to focus on what we are good at and that’s sawmilling.”

“Our decision to invest in Volvo Construction Equipment was essentially based on a productive, economic and reliability package with on-going back up support,” Dean concluded. “Those two machines average 90 hours each per week and in their first 12 months had each clocked up almost 5500 hours. Consequently, we’re certainly pleased with the partnership we have with CJD in Launceston which includes onsite service and maintenance.”