The Sentimental Journey – the beginning of a Kenworth W-model restoration project. 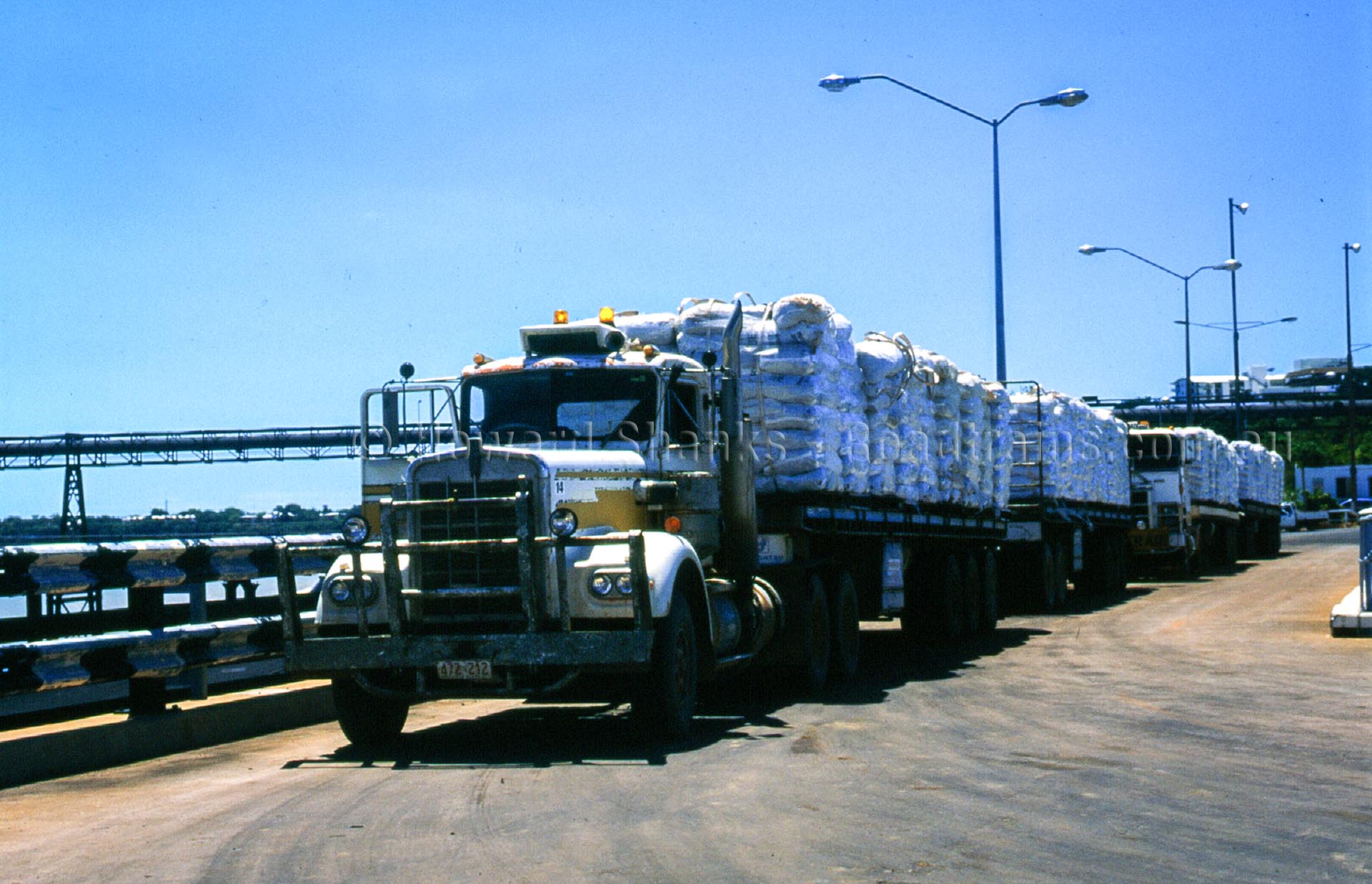 Carting pallets into Darwin wharf (circa 1996)

Sometimes something happens in our life to remind us of who we really are. On a recent trip to Darwin Shanksie had just such an experience when he stumbled across an old W-model that had faithfully toiled the Top End’s bush tracks for nearly three decades.

He was reminded of the days he spent as a child, sitting next to the old Hume Highway so that he could watch the big rigs rumble by. A shining new W-model came along, the driver smiled and pulled on the horn. A little boy’s heart was filled with awe, a lump lodged itself in his throat. A dream was born that day. A dream that one day he would be that driver.

A forklift darted out of the shed with a shrunk wrapped pallet, bound for a half laden trailer under the awning. 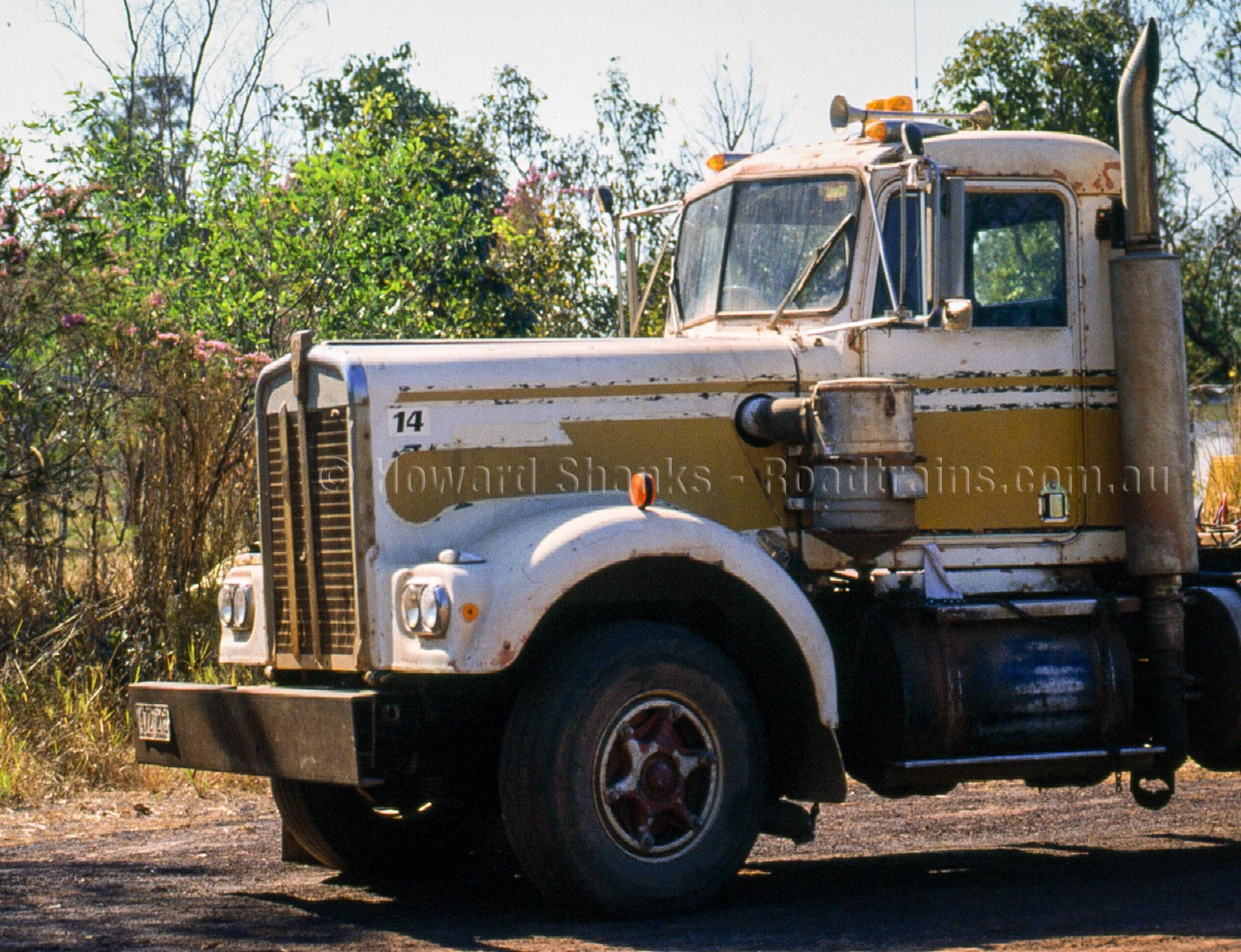 Parked down the back of the yard in Darwin

“You here for the old Kenworth, mate!?” The young forklift driver enquired, bringing his machine to a halt. “She’s round the back,” he motioned, nodding his head in the direction as he rolled himself a cigarette. “Good luck with it mate, you’ll need it. She’s nothing but a heap of shit.”

Her red stained paint, faded and cracked from years of blistering heat, was washed only by the wet season’s rains. Evidence of the hard-bush miles and bush engineers’ ingenuity to make do with whatever is available at the time was abundant.

I’d be lying if I said that I fell in love at first sight. With shaking head, I almost turned and walked away. But for some reason Banjo Paterson’s poem, ‘The Droving Days’ came to mind.

“Only a pound for the drover’s horse;

One of the sorts that was ne’er afraid,

One of the boys from the old brigade;

Only a little worse for wear…” 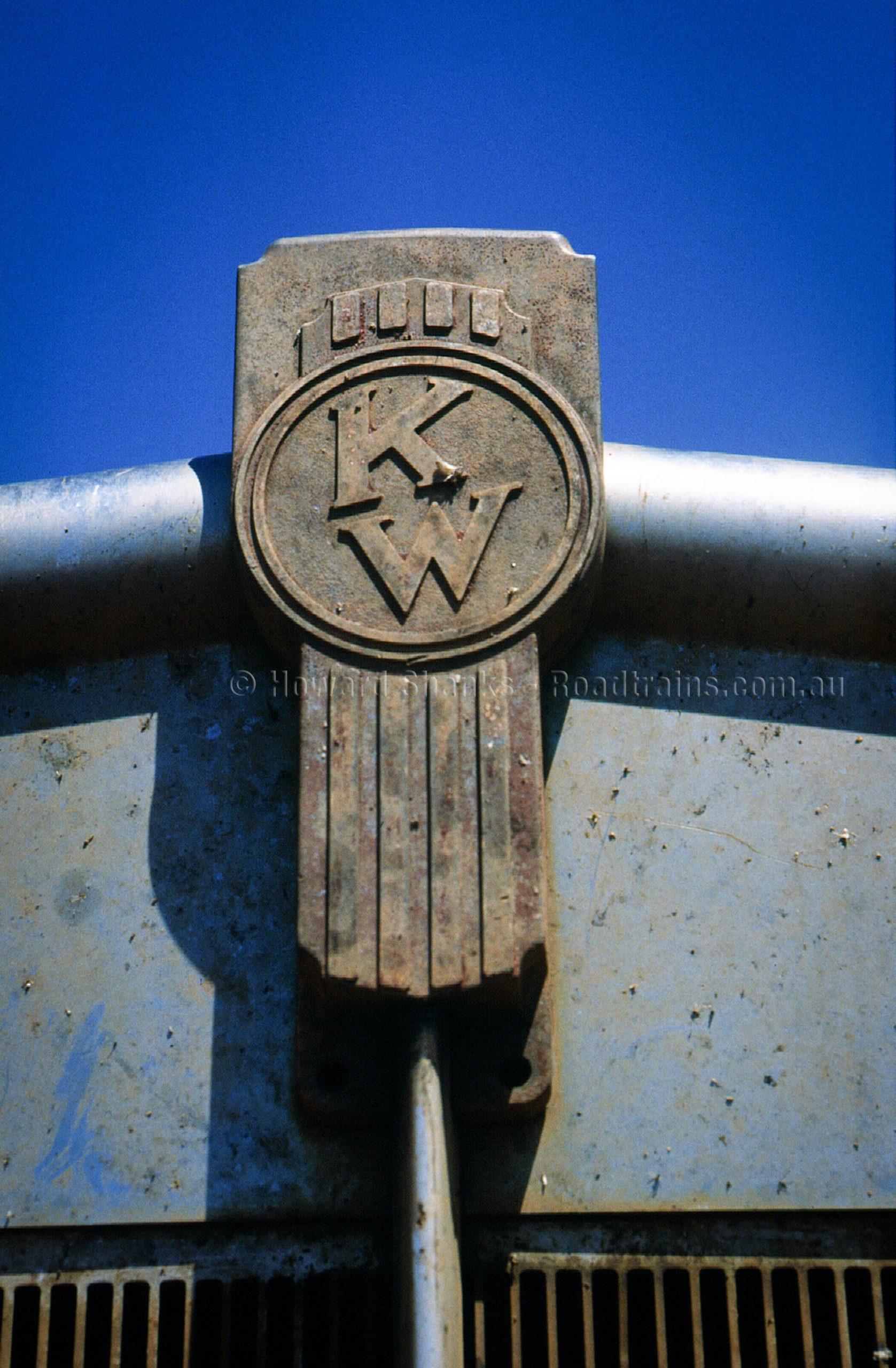 Years of harsh territory sun and long hard bush miles have faded the paint off the bug.

Like the drover’s horse, this old Kenworth had honestly toiled for its master year after year in the harsh Australian outback. Arid desert dunes and saltbush plains care little for chrome and glitter. Every extra ornament and shiny strip are just another nut or bolt to rattle loose over endless corrugations.

The stainless-steel straps holding the left-hand fuel tank snapped out on the track and were replaced by high tensile chain with old tyre rust bands for tank protectors. Not pretty, but at least the tank doesn’t roll. The heat and constant shaking had taken its toll on the fragile exhaust system, now held up with a dog and chain. The bottom elbow had also copped a pounding resulting in a gaping hole – outback sports muffler…

An old rusting jam tin, cut in half, formed the shield around the mirror-mounted reversing light, screwed on by a driver to stop the glare when hooking up road trains. The roof lining had been removed for some overhead work and put in a safe place. Unfortunately, it was so long ago that no one can remember where the safe place is anymore. You better believe it, this old girl had plenty of character. 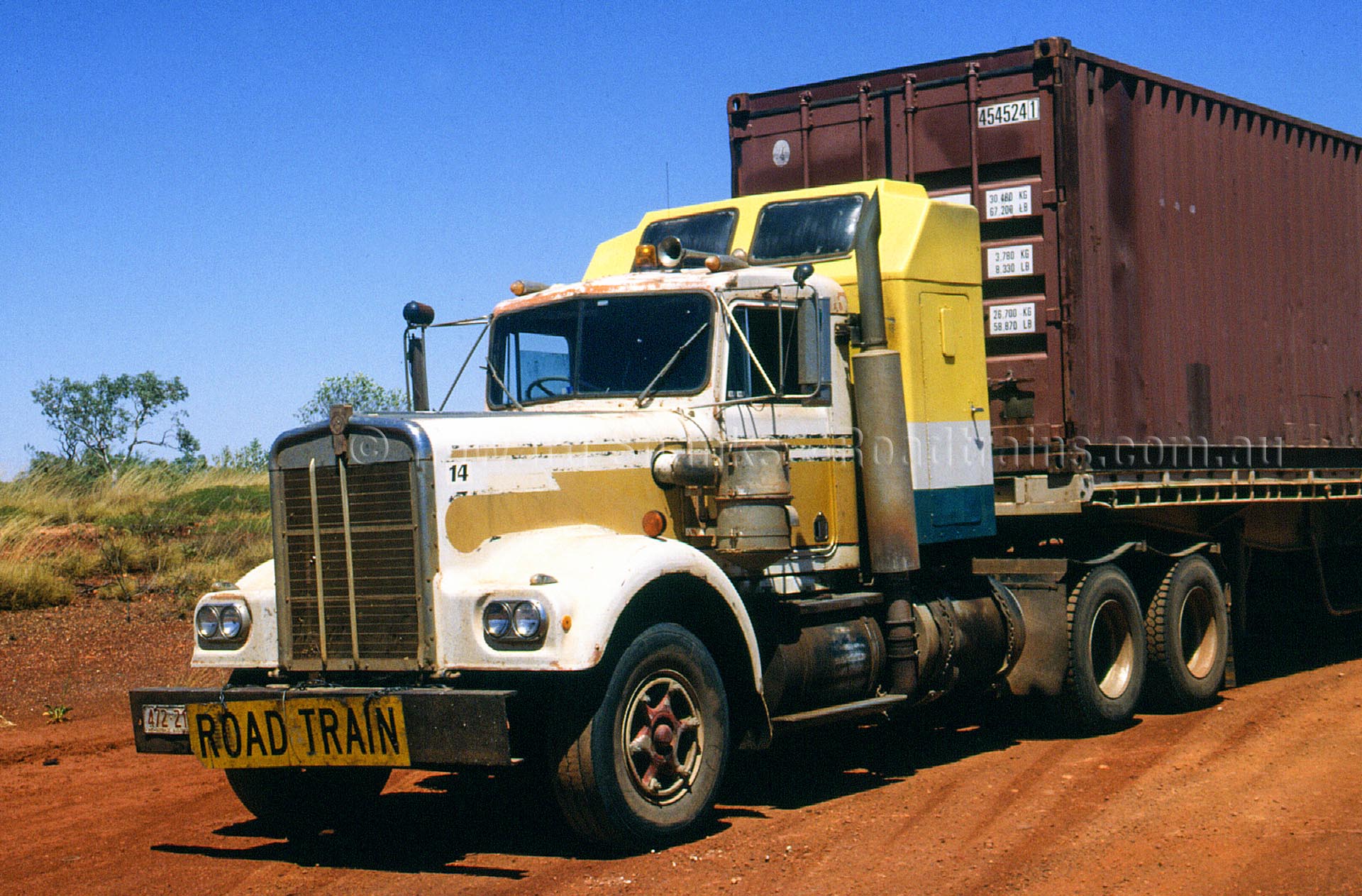 Shod with 70 per cent cleanskin Michelin tyres, the brakes were about 80 per cent all round. A couple of litres of Delo 500 had the dipstick level right. The coolant looked more like straight dam water than high tech engine coolant, nevertheless there was an ample supply. Apart from a few minor oil leaks, mechanically she looked in pretty good nick.

Specked originally for Peko Mining in 1973 with a 350 Cummins set at 335, a 13 speed Roadranger and SUDD’s on a double row frame, she was a big truck in her day. The Old Kenworth clocked up a couple of million miles – yes the speedo is still in miles per hour – for Peko mines.

At some time in her life, the 350 Cummins was replaced with a 385 Cummins from a Euclid dump truck. Fitted with a 15-speed overdrive, dual speed Eatons now sit where the SUDD’s once rode. A Ross power steering system from a 1985 W-model has vastly improved the steering offered by the original Vickers power assisted package, which was leaps and bounds ahead of the Armstrong steering commonly found on most trucks back then. 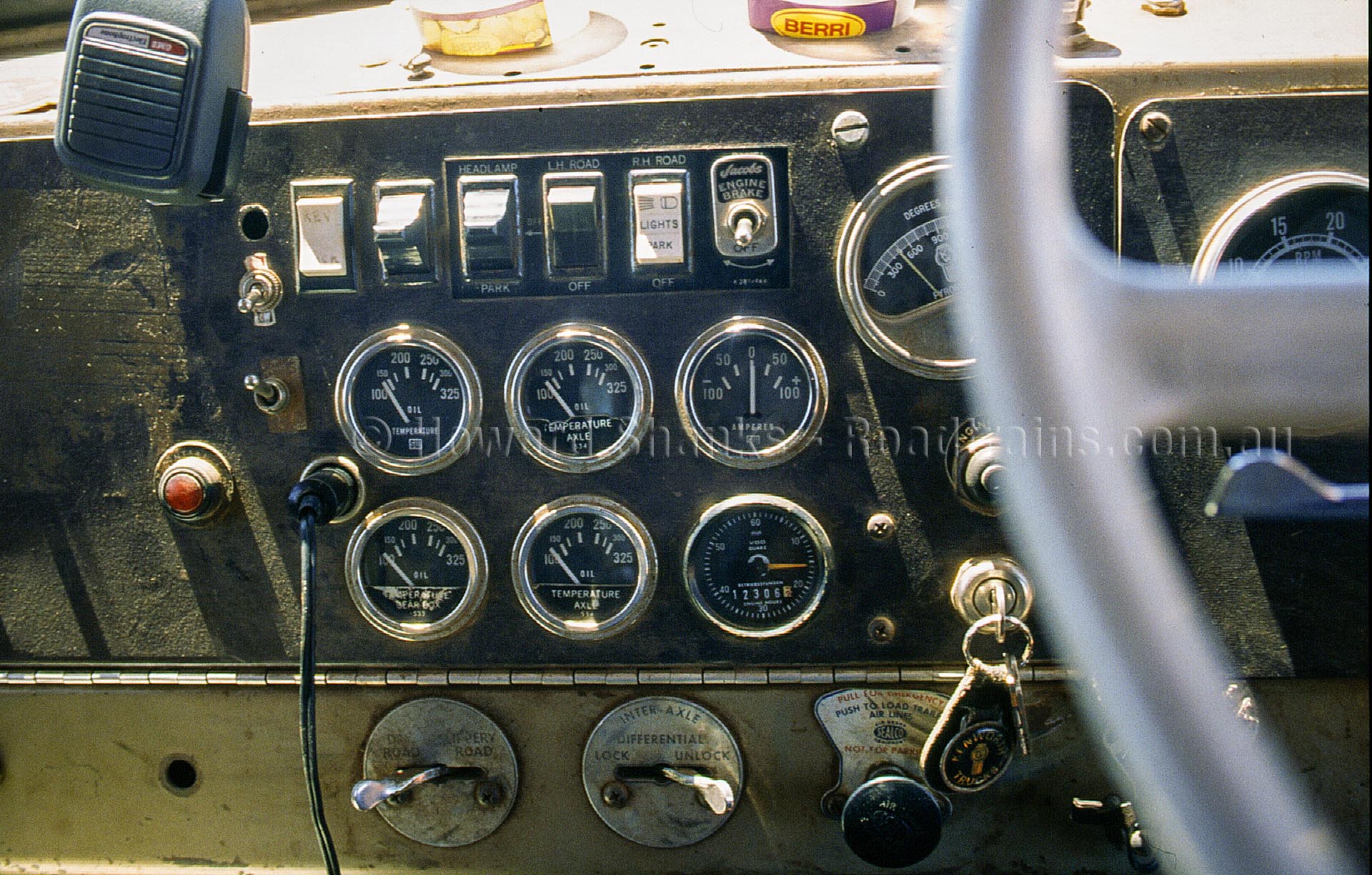 Only a pound for the drover’s friend.

The drover’s friend that had seen his day,

And was worthless, and cast away

With a broken knee and broken heart

To be flogged and starved in a hawker’s cart.

Well, I made my bid for a sense of shame. And the memories dear of the good old game. 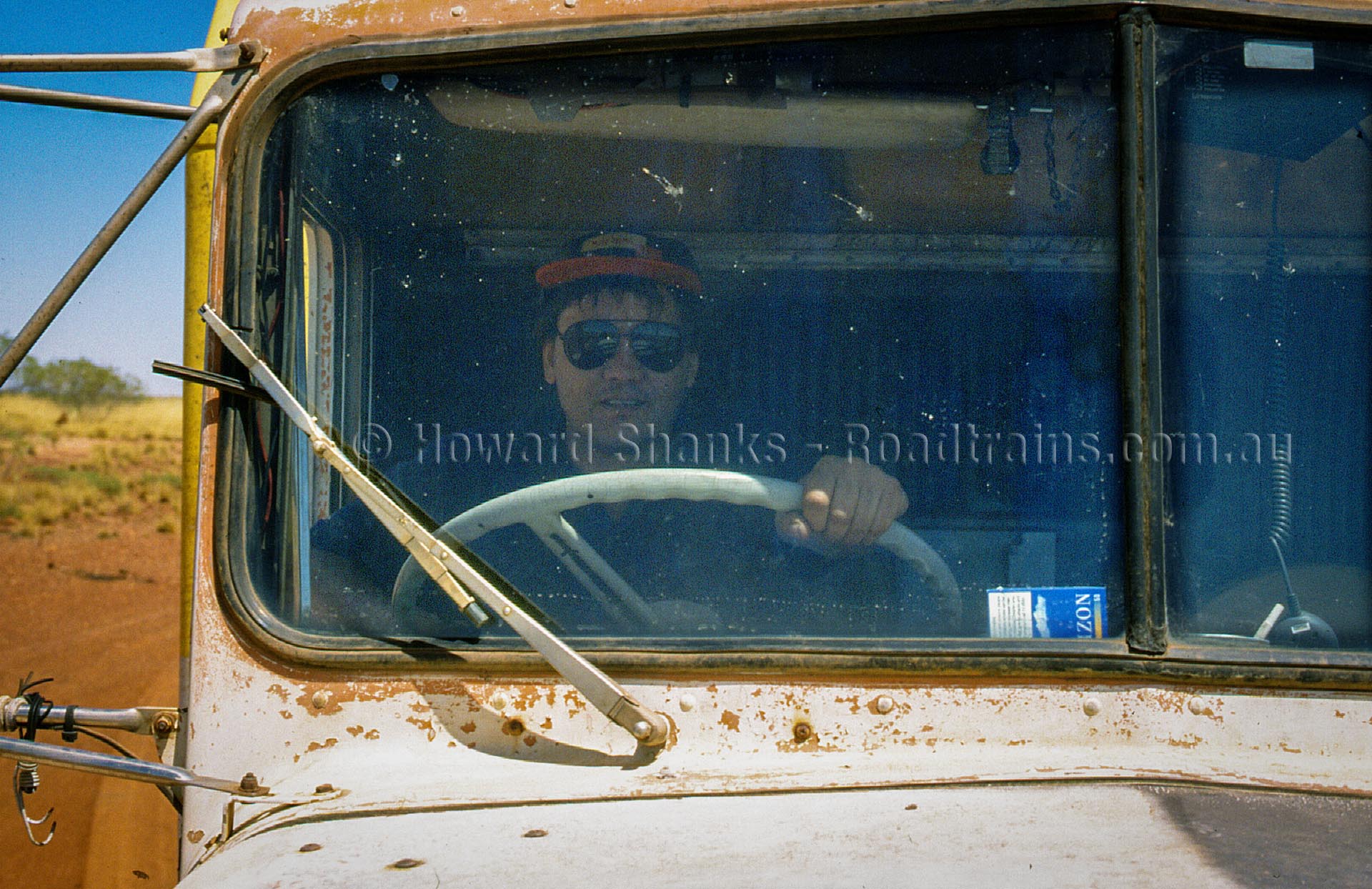 That lump came back and the decision was made, I would take her home. “We’d better find some freight for you,” my accomplice – who shall remain nameless for fear of serious repercussions from my wife – smiled as he patted my shoulder in understanding.

Freight out of Darwin is scarce at the best of times, however by mid afternoon he’d rounded up a loaded container and a new trailer that needed to go back south. A double road train, a fitting tribute to this old girl’s capabilities.

Before heading south there was just one more thing that needed doing. The driver’s window winder was frozen in the down position. While that might be fine in the Territory, it tends to get a bit colder and wetter in the southern states. So, it was a quick trip to Paccar parts for new window winder bits.

The service and availability of the guys at Paccar Parts was remarkable. After quoting the chassis number the guy behind the counter jotted a few notes down and proceeded to a back room, returning a few minutes later with an arm full of parts. He laid them all out on the counter and told us where each one went and to give him a call if we needed any help. In contrast, my car is six years old and when you go to the big dealerships in the city they tell you to come back next week as they have to order the required parts in. My hat’s off to the guys at Paccar parts for their service and assistance, it stunned me that you could walk in for parts for a 27-year-old machine and still get them straight away. 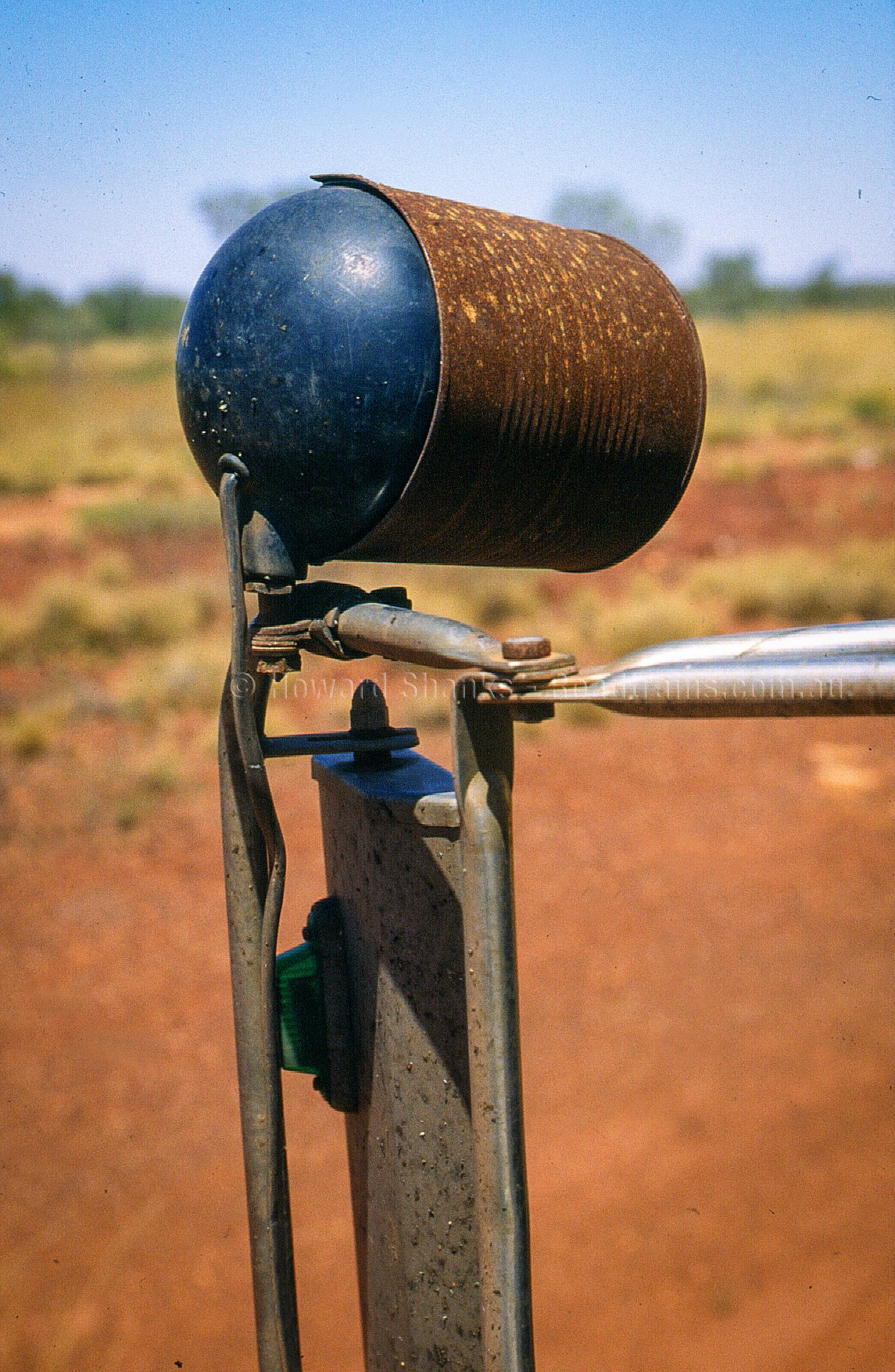 A few hours later the window rolled up and down freely. The tanks were full of fuel, the trailers hooked up.

In today’s transport game where profitability drives the decisions we make, I realised that I’d lost sight of the reasons I had entered this industry in the first place. While making money is always a key factor, I yearned to roam the land. To see this great country and meet the characters that helped make our nation what it is today. To meet the challenge of getting the freight through no matter what the adversity.

Remember those nights when we changed tyres in the pouring rain? Replaced a water pump by torch light on the side of the road near Yass? Chained the middle axle up on the second trailer just out of Dunmarra when a wheel bearing seized? All pains in the butt at the time, but they make reminiscing so much more fun and added zest to our lives. Yes, there was a certain romance in being a driver back then, wild and free. 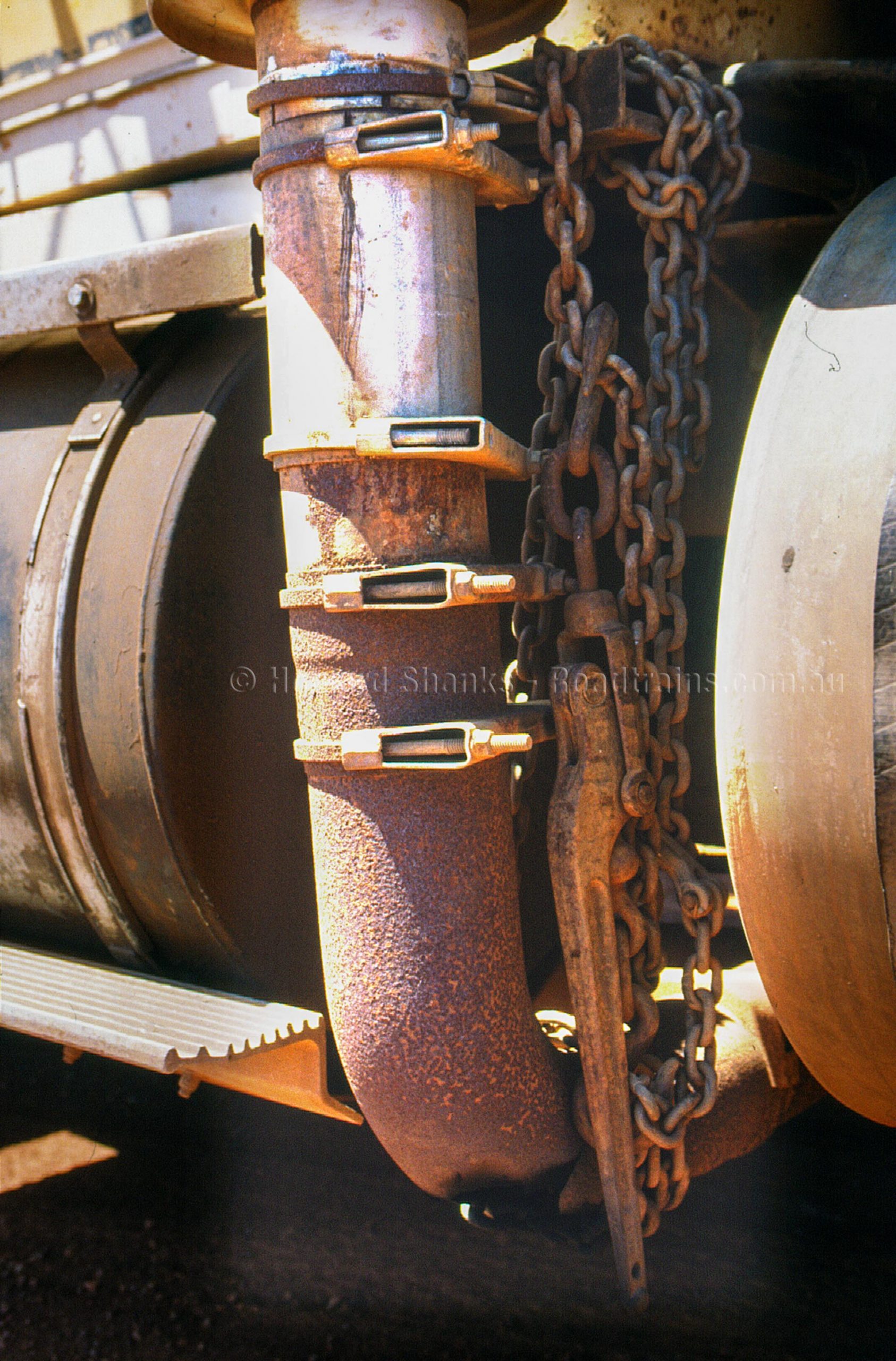 A plume of black smoke rose from her chimney as the starter cranked the old girl into life. As we rolled out the drive and the long bonnet pointed south against the setting sun those final words of Banjo’s poem came to mind.

“Thank you? Guinea! And cheap at that!

Against you there in the curly hat!

Only a guinea, and one more chance,

Down he goes if there’s no advance.

And the old grey horse was knocked down to me. 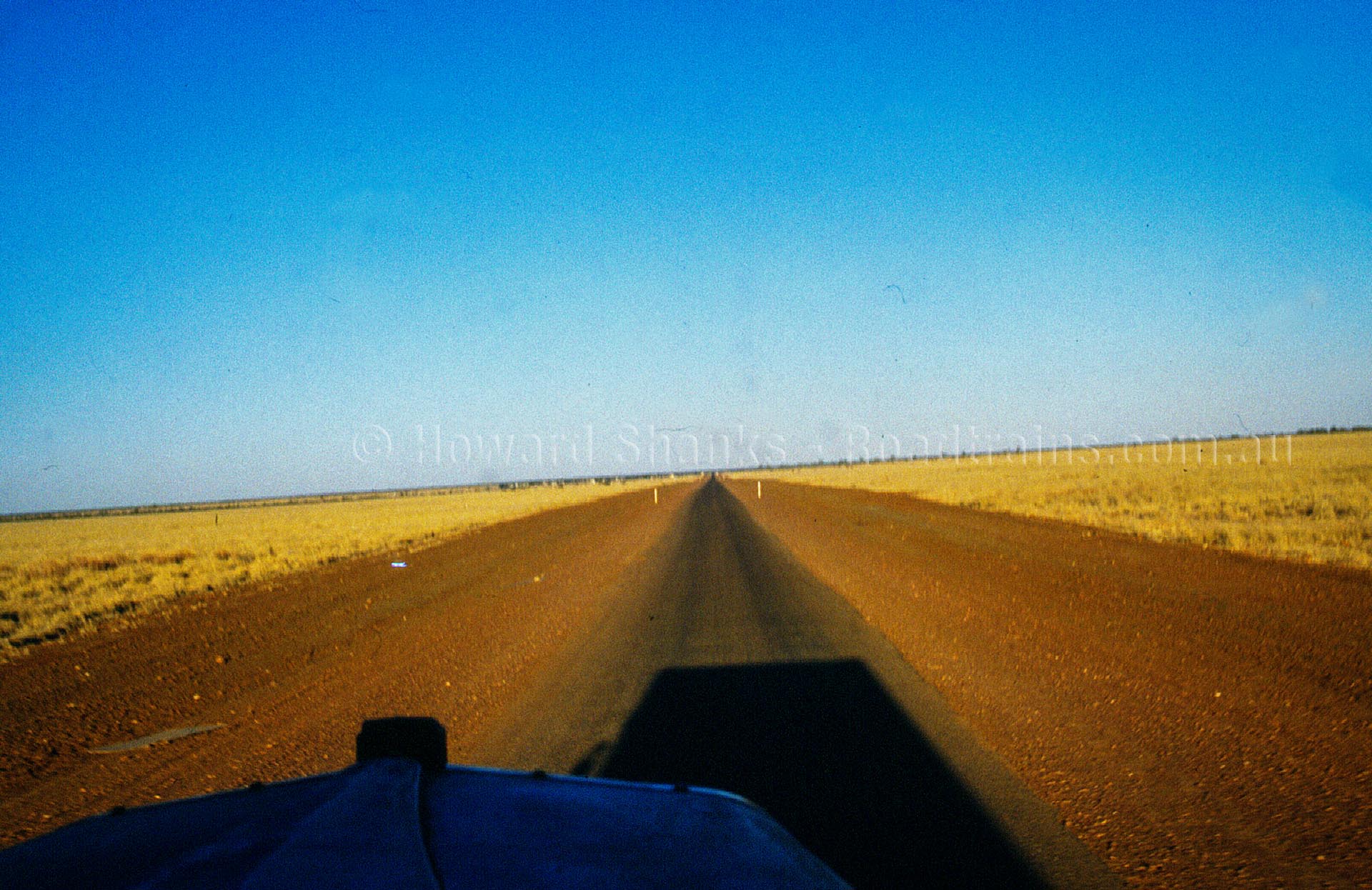 On the lucerne flats by the Homestead Creek;

I dare not ride him for fear he’d fall,

But he does a journey to beat them all,

For though he scarcely a trot can raise,

He can take me back to the droving days.

No, she may not be a pretty sight anymore. But this trip is for that little boy whose dream came true, even after forgetting he’d ever dared to hope. 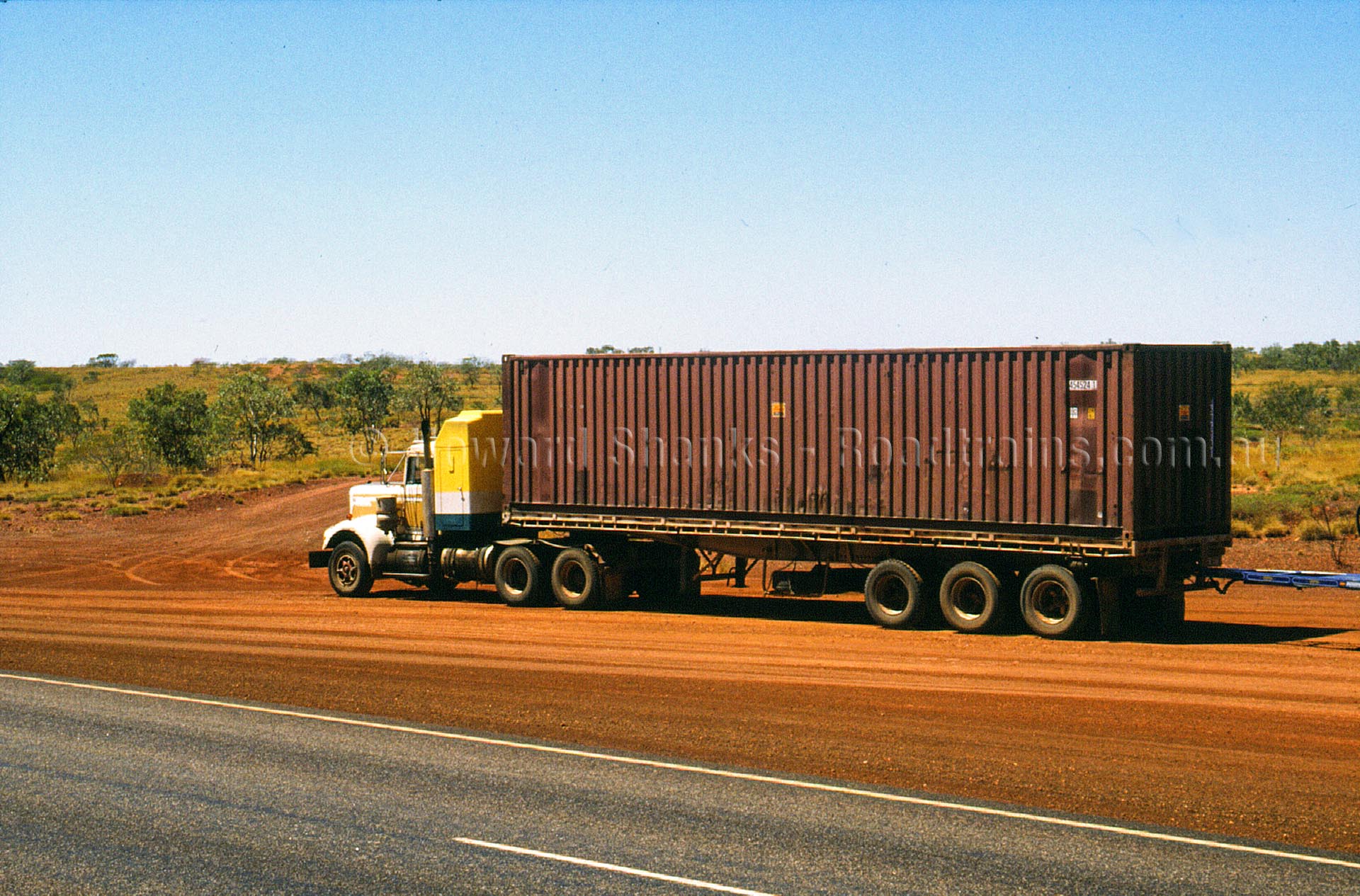 It was originally thought that the below photo was taken at the time of delivery to Peko Mining. However, it is of a sister truck thought to be the first of the order. The most significant difference being the type and position of the door handles, which were changed to the lower position in early 1973. As for the rest of the spec, including the brilliant orange paint scheme it is very much as the old girl would have looked when she left Kenworth’s Bayswater factory around the end of September 1973. The date of the bill of material for Chassis number 400653 is 21/09/1973. Incidentally, the model designation – W925AR;  W-900 indicates it is a bonneted truck, the 24 indicates it has a 6-Rod rear suspension and the AR is Australian Right Hand drive.

(as per spec sheet)

The above specifications highlight the unique flexibility of Kenworth’s custom engineering capabilities. From the heavy-duty factory optioned spec of the original owner through to the modified spec of the present owner, this old toiler of the bush is one Kenworth that keeps on keeping on.