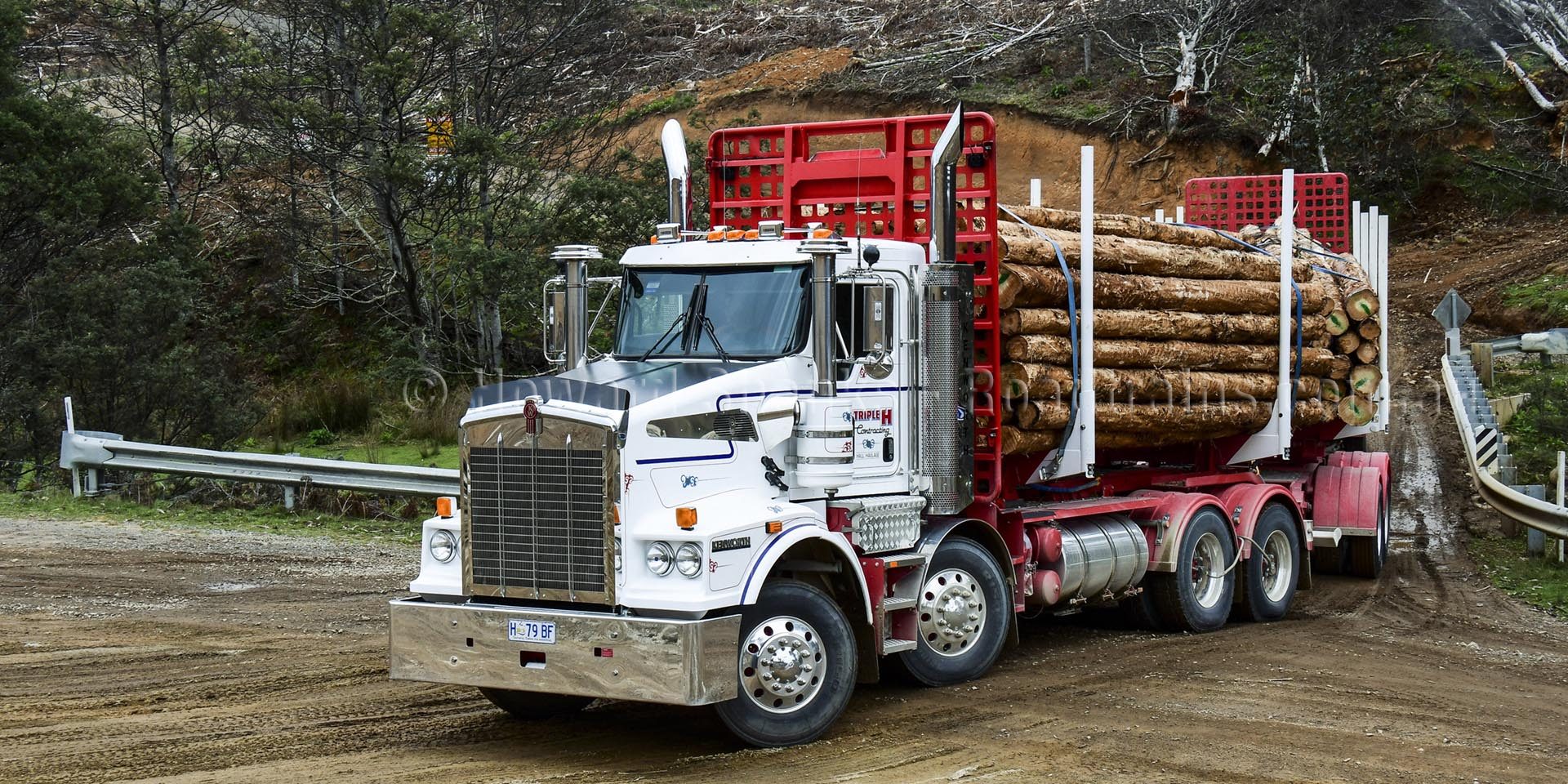 Increased productivity with proven reliability may have influenced key determining factors in the decision for Triple-H Contracting to specify a Kenworth T659 8×4 fitted with a Kennedy folding quad dog and AIR-CTI central tyre inflation, but it was the committed back-up service and improved safety features that finally sealed the deal, as Howard Shanks discovered. 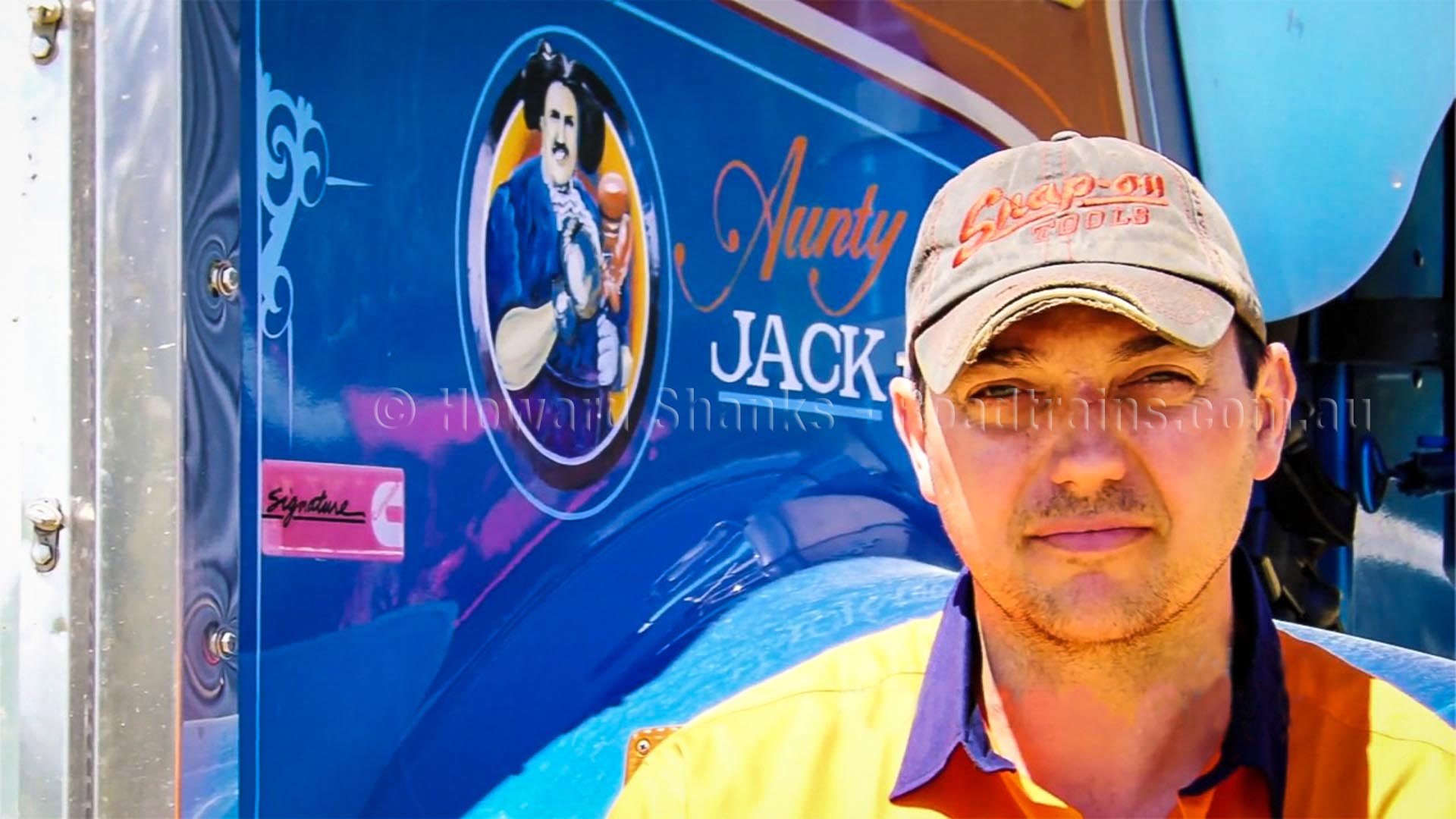 Triple H Contracting owner, Manuel Hall, is a second generation logging contractor with an infinite knowledge of the industry that spans almost three decades. The arrival of the new T659 8×4 and quad dog incidentally coincided with the tenth anniversary of Triple H Contracting’s formation.

Manuel began working for his father Ken’s logging business in the mid-80s, while still studying in school where he developed the skills required to become a successful contractor. However, by 2007 Manuel decided it was time to branch out on his own and he entered the contracting game, specialising in the harvesting of Tasmanian hardwood and softwood plantations, with one employee and himself working long days to make ends meet. Over the next four years another harvester and excavator was added complete with a new crew to operate them. Persistence and good old fashion service along with the skills he’d learnt and honed from his father Ken’s mentoring in those informative years paid off when Triple H Contracting was awarded a contract with Timberland Pacific a short time later.

This year Triple H Contracting will harvest in excess of 250,000 tonne of products and transport over 90,000 tonne of processed logs with their own trucks and engage sub-contractors to pick up the remainder. 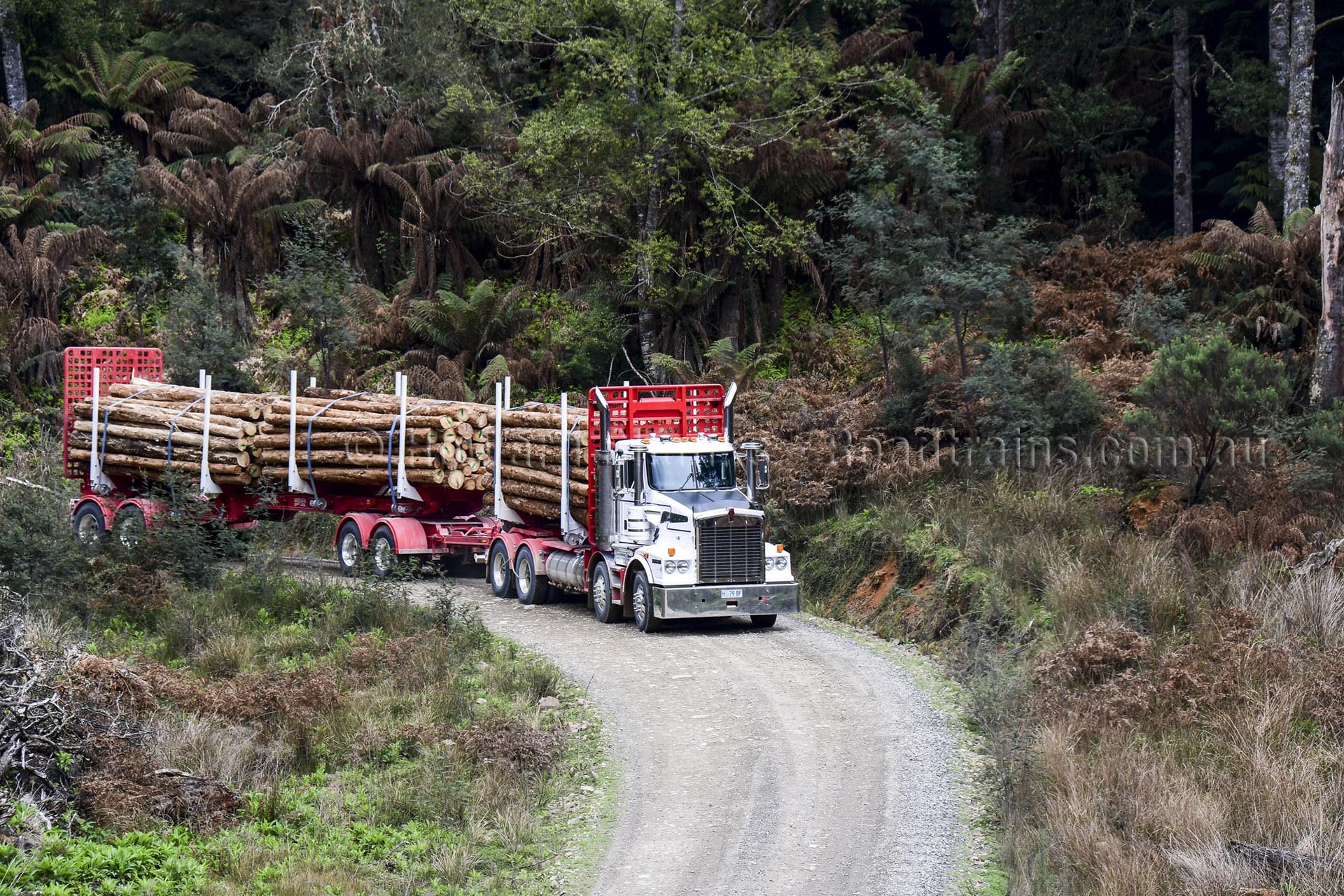 Fully loaded on the way out the bush

“We chose the Kenworth T659 8×4 because they’re renowned for their reliability,” Manuel began. “Especially in the steep rugged north of the state. Sit outside any of the log yards at Bell Bay for half an hour or more and you soon realise just how popular these T659 8×4 models are for this type of work as nearly every third log truck arriving will be one.”

There are several advantages of a T659 8×4 with a Quad-Dog has over a conventional semi or B-Double,” Manuel continued. “Firstly, is their extremely light combination tare weight of 20.5 tonne. We get a 41.5 tonne payload on this configuration, with a gross combination mass of 62 tonne. Compare that to a B-Double and there is virtually no gain in terms of payload.”

“Furthermore, with a B-Double you have additional registration and insurance costs for the second trailer,” he continued. “On top of that you have the added challenge of finding drivers with multi-combination licences, it’s far easier to get HC drivers than MC drivers and training costs are much cheaper. They can virtually go anywhere too, although in some areas we might get our combination weight lowered due to ageing bridges with load limits on a specific route but for the most part they’re loaded to the maximum weight with general access.

How to operate a Kennedy Folding Skel trailer

“The advantage of the self-loading Kennedy quad-dog when it is folded up on the back of the T659 8×4 is it keeps weight on the drive wheels for the run up to the landing where we load the logs,” Manuel informed. “That way we have good traction and the empty trailer is not getting shaken to bits on the rough bush tracks. It also makes manoeuvring around the landing area much easier and safer prior to loading. Importantly there is much less wear on the trailer tyres and brakes as they’re only traveling half the distance compared to the truck.

Kennedy Trailers is based in Bairnsdale Victoria and been operating for over 30 years. Quality logging trailers maybe predominantly what they’re renown for, however in more recent times their expertise in building superior equipment that can withstand rugged bush conditions has seen their product range expand to mining and heavy transport equipment. Garry Kennedy along with sons Lynden and Cory are the driving force behind the innovation that is seeing Kennedy Trailers leading the way in log transport technology.

The Kennedy quad dog boasts some high-tech features as well, including a ExTe auto tensioning load binders and the inclusion of the BPW Trailer Electronic Braking System which offers the Roll Stability Program. 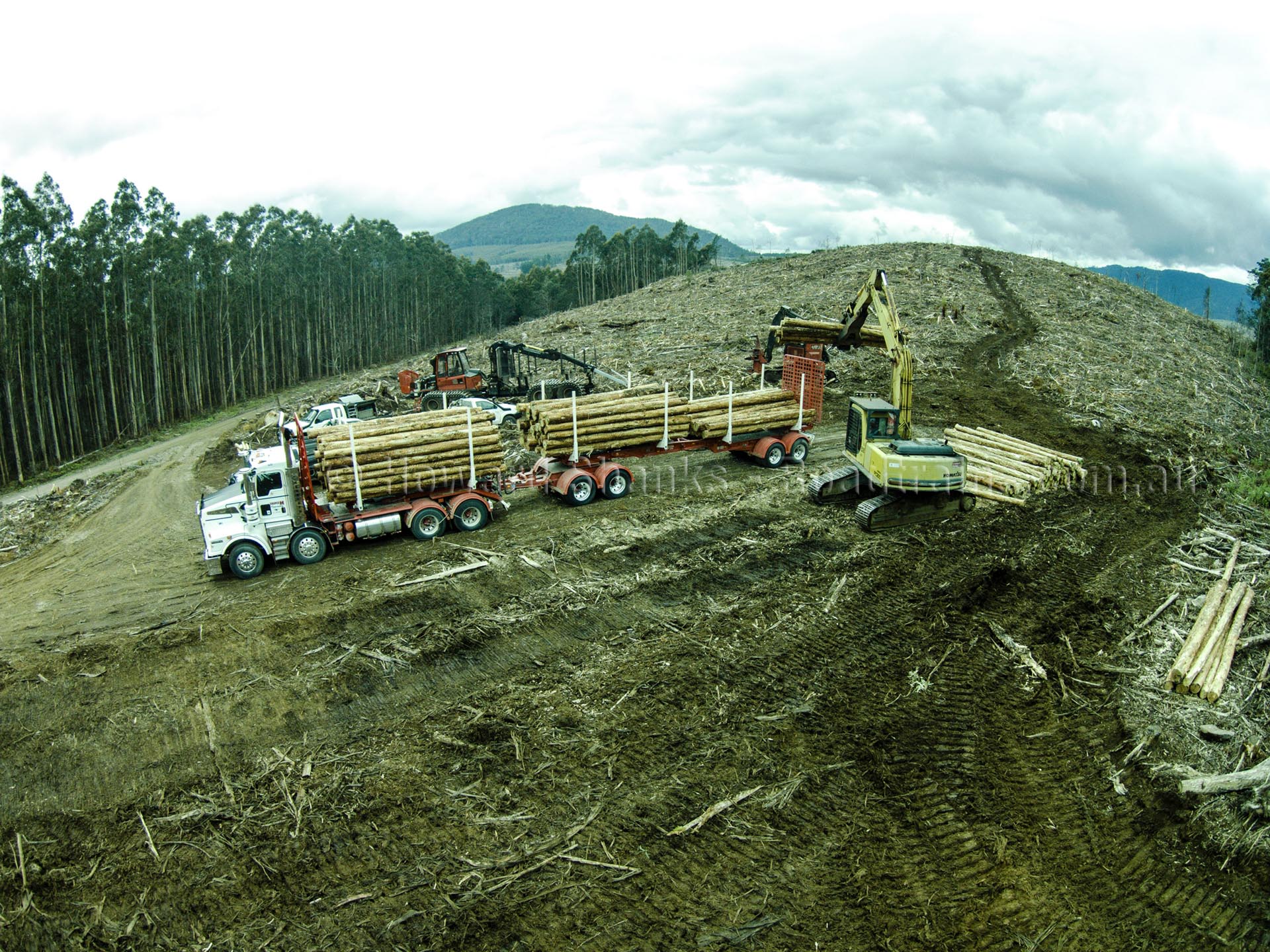 “We’re currently specifying our new trailers now with the EBS and BPW brake technology which I believe has contributed greatly to the elimination of both avoidable accidents and roll-overs over the past five years, Manuel explained. “I’d recommend them to any operator who has any high centre of gravity loads, like logs, or dynamic moving load issues, that they investigate the BPW Roll Stability Program.”

“The cost effectiveness and reliability of BPW’s axles, brakes and suspension is reassuring. They’re guaranteed for three years or one million kilometers and that’s why we only use genuine BPW parts when replacement is required. With that sort of warranty BPW obviously believe in their product. That encourages me that it’s worth the investment,” he added.

“The ExTe auto load binders operate from the truck’s existing air system, making the task of load restraint simpler and safer,” Manuel informed. “The truck’s air pressure does all the hard work, quickly tensioning load binder straps once activated, then continually applying post-tension to the load whilst it is in transit. It eliminates the use of cheater bars on ratchet handles and there is no need to stop and re-tension straps a few kilometres down the road. The straps are just kept tight all the time. 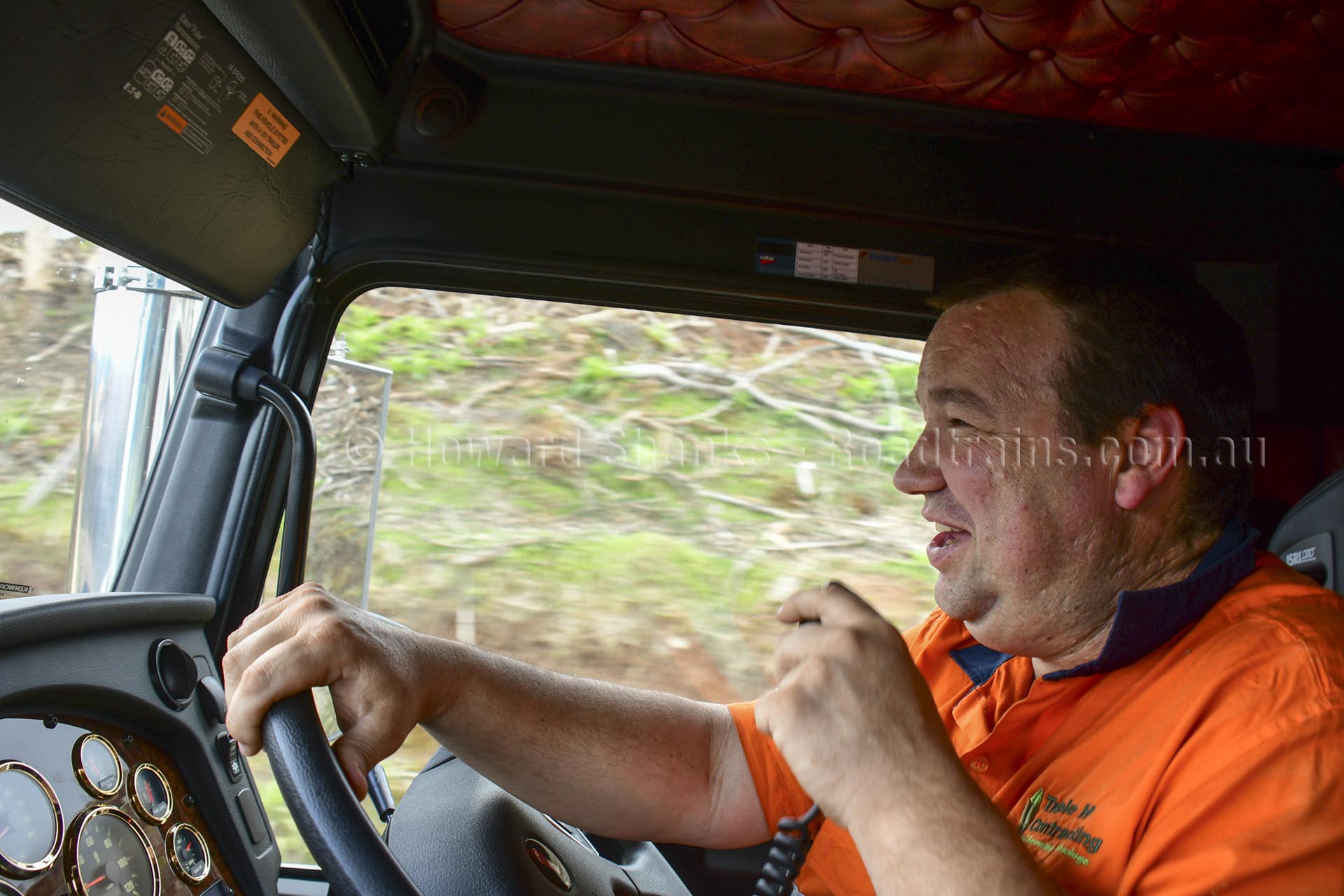 Driver Joe Davis loves the comfort, handling and power of the Kenworth T659

The TU model features symmetrical design, easy change from left-handed to right-handed operation, and an easy release function. Different strap widths, lengths or even combination with chain can all be accommodated.

The TU model can maintain up to 1,000 kg of pre-tension on the load. “It’s a guaranteed, measured tension that is consistent every load, which means load restraint is not governed by the driver’s strength,” he added.

“I specified the AIR-CTI central tyre inflation on the drive of the T659 for a number of reasons,” Manuel explained. “Firstly, to reduce tyre wear. Sure, there is an up-front investment in the system, but that is quickly paid off with the extended tyre life we get. Secondly the AIR-CTI system greatly improves traction and gives a far better ride when the truck is empty which reduces the wear and tear on both the truck and trailer.”

“The AIR-CTI system is made in Victoria and their quality is far superior to imported systems,” Manuel informed. “Take the Super tough heat moulded, ‘Snizentite’ drop pipes that fit close to the tires, they’re just made to last in our tough bush work. Also their unique lightweight, zero rust Delrin rotating glands (rotators) which have carbon seals and tungsten carbide seats that deliver excellent bearing protection are extremely durable. They even have triple sealing rotator mounts which are easily installed using the original axle studs for reliability and serviceability ease. When it comes to tyre changing the system includes top grade tyre hoses with self-sealing quick-connect fittings that are ‘cut to length’ for easy fit up.”

“They (AIR-CTI) are a great asset, but I think it’s the fact that the AIR-CTI system is a well thought out unit which has been developed locally to suit our harshest bush conditions and built with quality components is why they are so reliable,” Manuel added. 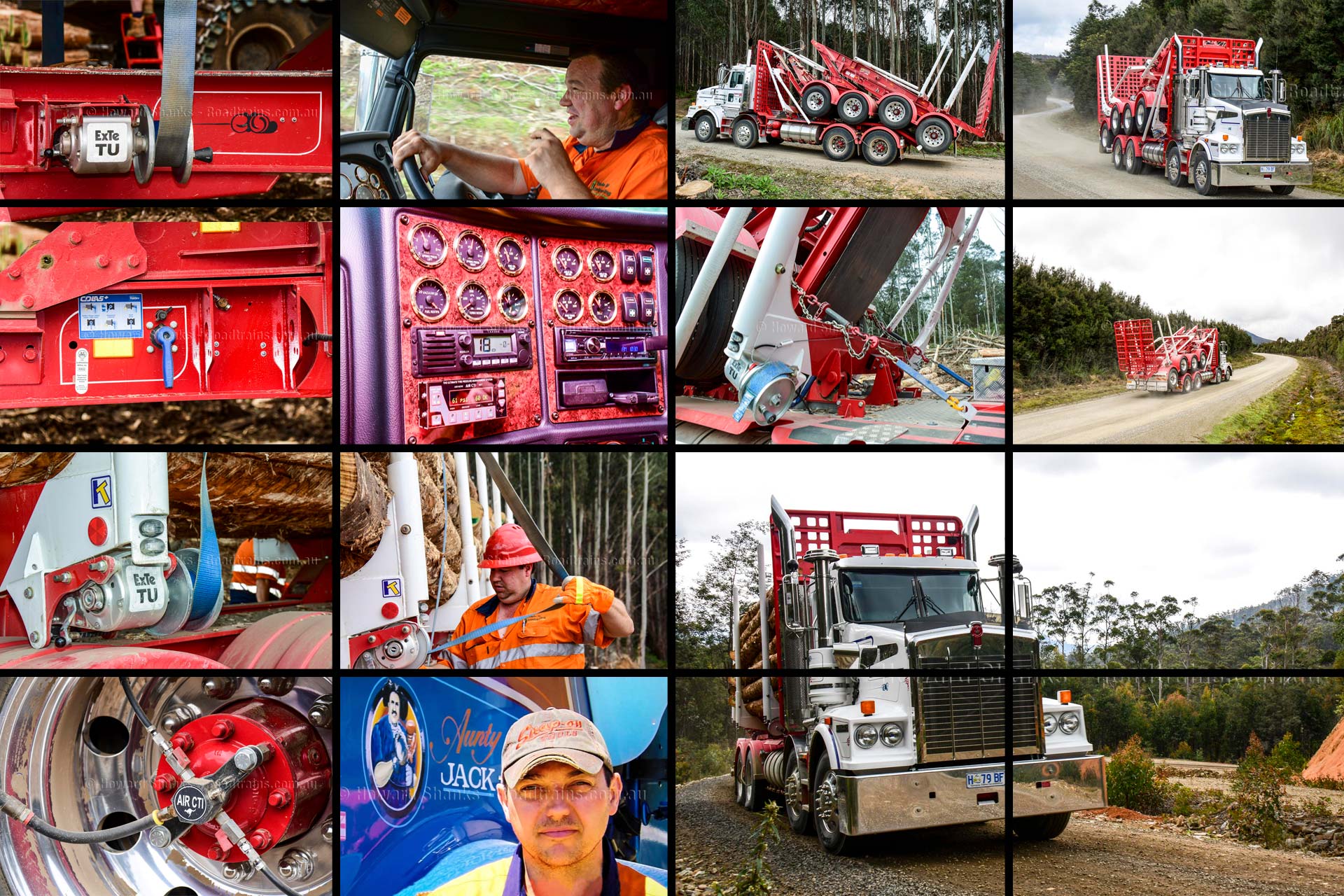 The fully specked unit is an impressive work horse.

Driver Joe Davis agrees with Manuel and explains how the AIR-CTI system has three pre-set tyre pressures, 40PSI, 60PSI and 90 PSI which he can select on the run.

“For fully loaded highway running I select P1 on AIR-CTI dash controller which is 90 PSI,” Joe explains. “The P2 setting, which is 60 PSI, I use when I’m going into the bush with the trailer folded on the back and coming out loaded. There are a couple of soft steep pinches on the way out where I select P3 which drops the tyre pressure down to 30 PSI. The controller also has the ability to fine tune the pressure with the up and down arrows but for the majority of the time the pre-set pressures work well.”

“One advantage of the system is it will alert you if there is a rapid decrease in tyre pressure, for instance if I were to stake a tyre on a tree root, the AIR-CTI controller will alert me to the sudden loss of air and I have time to stop the truck get out and turn off the taps to isolate the tyre and rectify the situation before any serious damage is done. Honestly in this business you’d be crazy not to have AIR-CTI fitted to your truck.” Joe added. 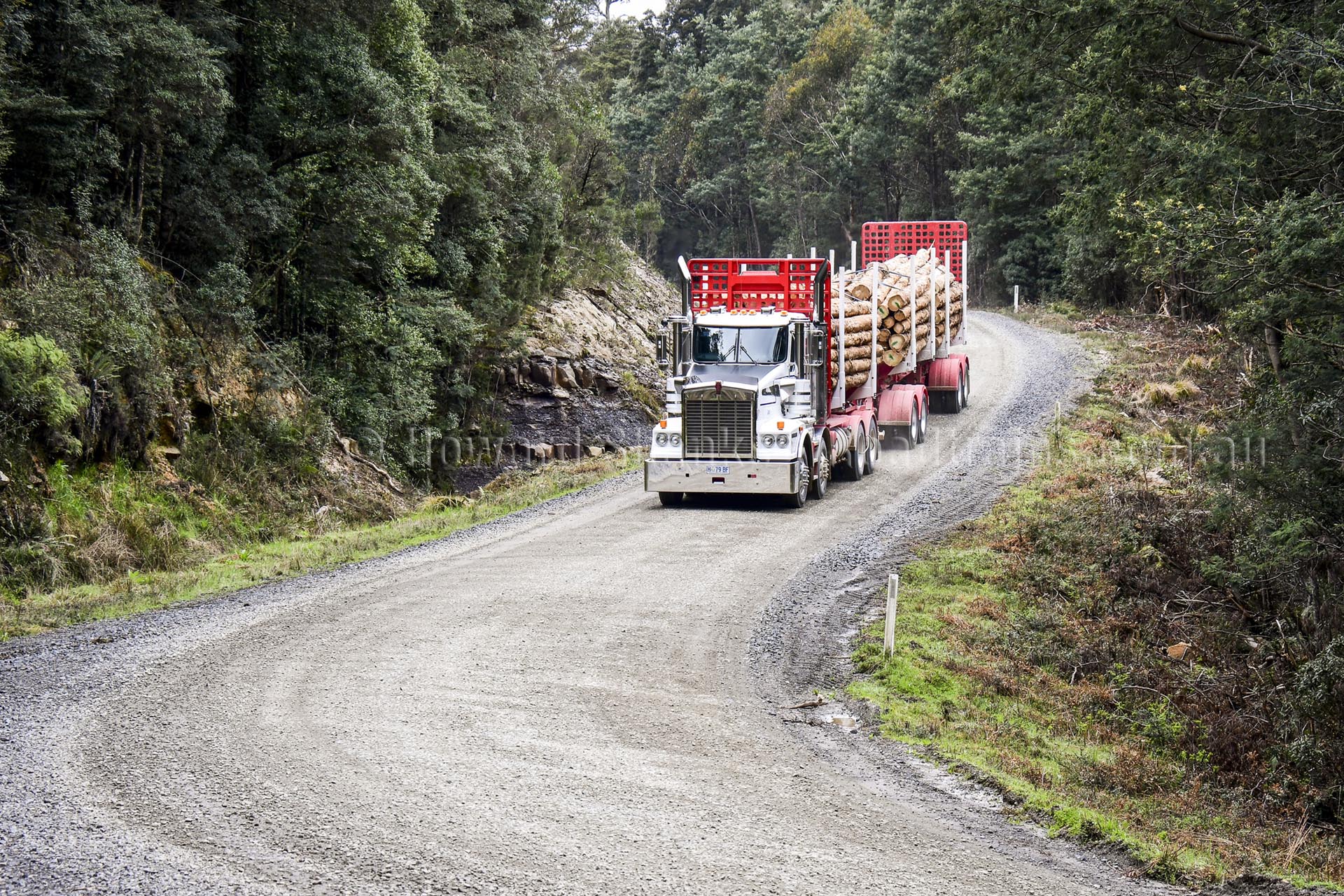 “I’ve often wondered why blokes with tip trucks don’t run the AIR-CTI system because they work in similar conditions to us,” Joe questioned. “Why would you run back to the quarry empty with 90 or 100 PSI in your tyres? All you’re doing is smashing your equipment.”

Joe also noted that the ride, comfort and handling of the Kenworth T659 8×4 was exceptionally good. “The steering lock is very good for a truck this size,” Joe revealed. “The finish of the Kenworth really puts them in a class of their own. For this type of work, they’re really the only choice if you’re serious about getting a good return on your investment.”

It’s only early days for the big red Cummins under the hood, but so far both Manuel and Joe are pleased with the performance and economy. “The Cummins is really going well,” Manuel said “I’m sure it will get better as it loosens up too.”

“Chris Saltmarsh from CJD Equipment in Launceston really looks after us,” Manuel volunteered. “Parts availability and service from them is really good, they nearly always have everything in stock so there is no waiting for parts or added freight costs. Having a sound business partnership relationship with CJD really helps us be more efficient and reliable in our operation.

“When you consider we’re getting almost an equivalent payload to a tri-tri B-Double with less axles, trailer and registration this combination just makes good business sense which is why it’s worth investing in quality equipment like the Kenworth T659 and Kennedy trailer.” 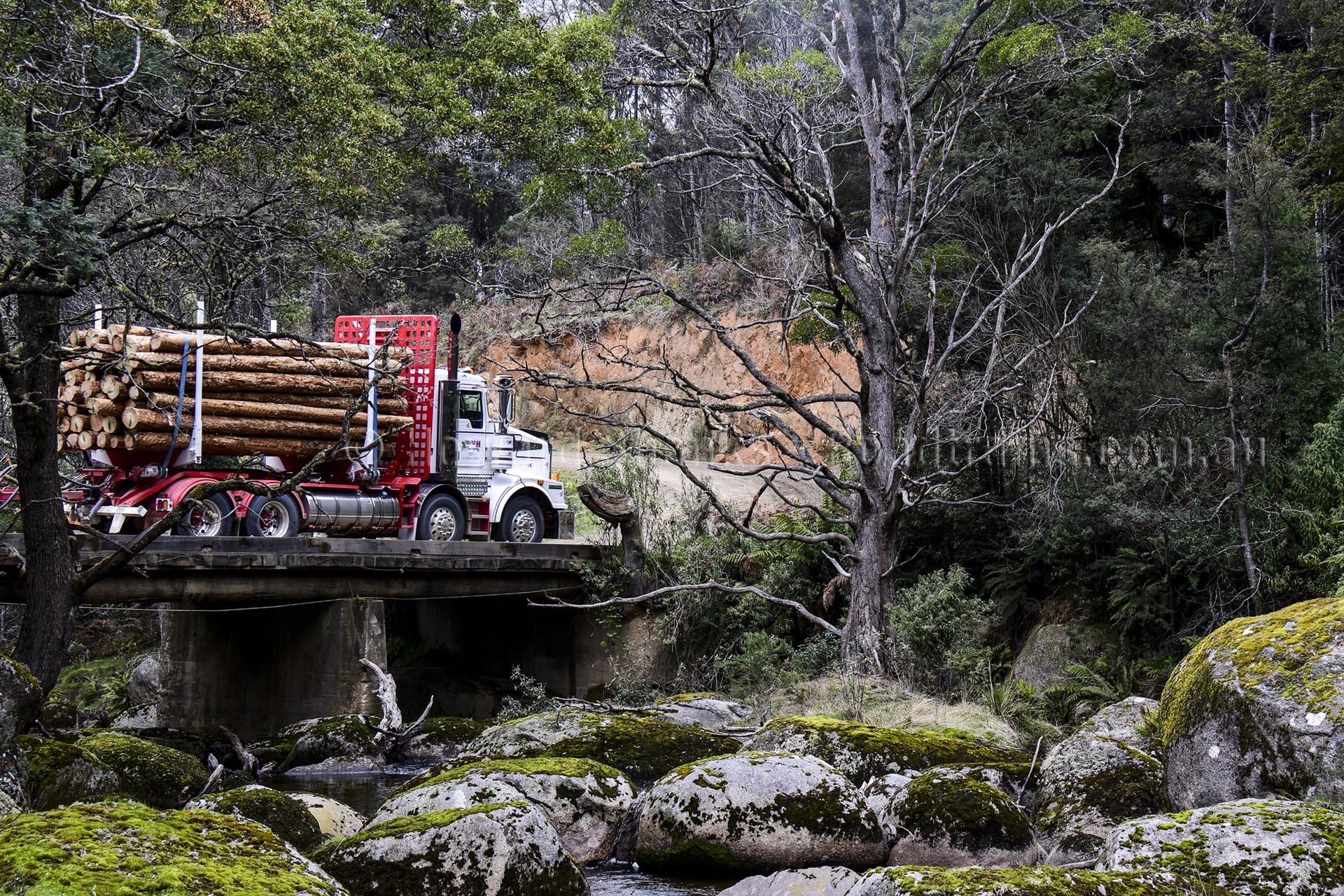