Tasmanian based Andrew Flynn is one innovative operator that repurposes old highway prime movers to suit his growing firewood business. This striking K100G is one of Andrew’s creative custom builds that enables him to deliver generous loads of 4.2-meter-long firewood logs to his expanding customer base. We sent Howard Shanks to investigate. 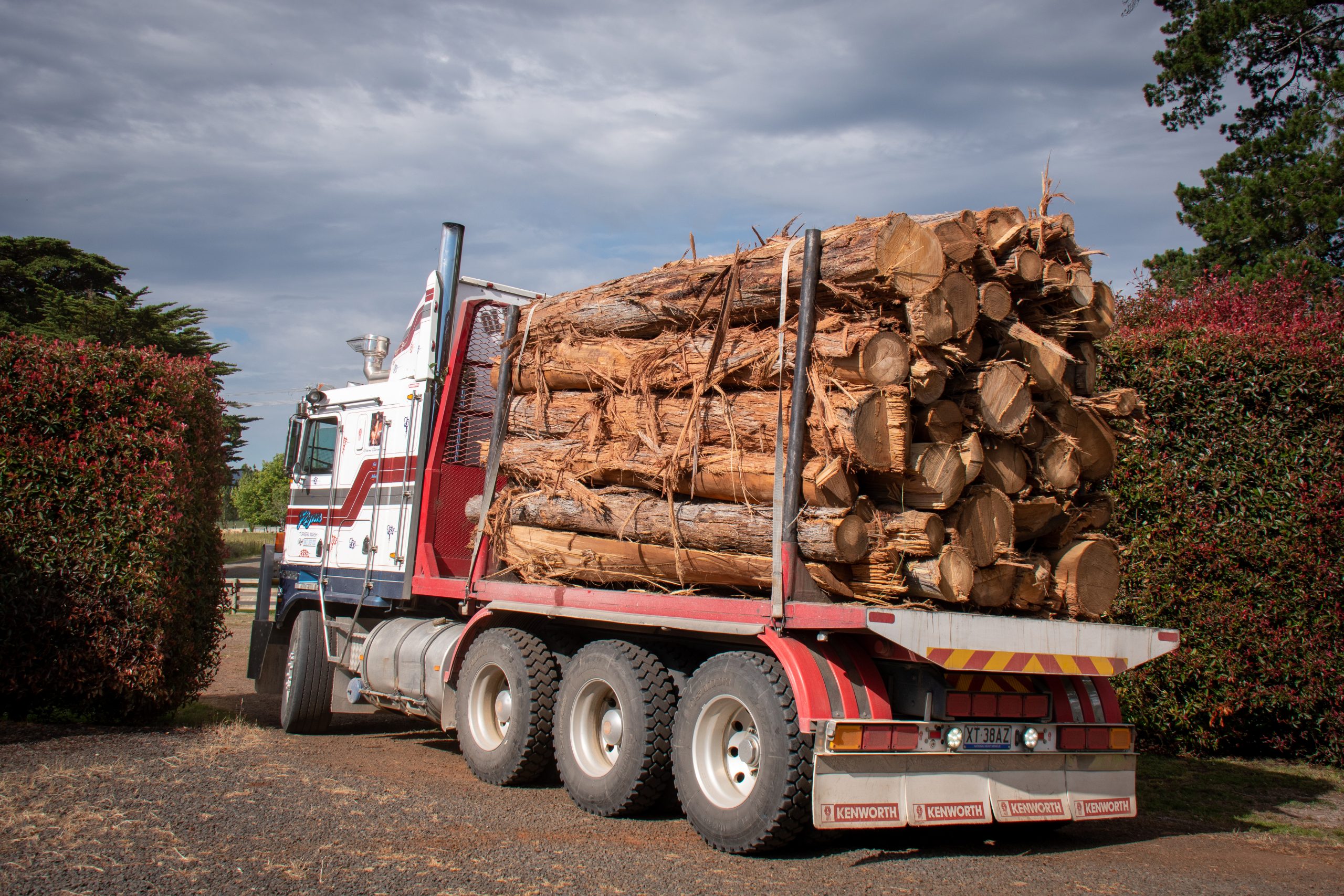 The winters in Tasmania are long. Dam long, and cold. Consequently, demand for firewood is high in the island state, especially this time of year. The more perspicacious fire wood cutters among us take advantage of the warmer months to split and stack their new season firewood into drying heaps. Capitalising on the hot, dry winds in late summer to help cure their wood ready for the winter.

If you have the room to store logs, and the time to cut and split them yourself, then a load of logs from Andrew is the most economical way to get firewood. At the time of writing, he had taken more than 70 orders in the past week alone, and as he put his phone back in his pocket, he smiled and added, “there’s another one to add to the list”.

But let’s put the intricacies of firewood aside for a moment and check out Andrew’s unique K100G.

After a glance at the photos, it is quickly apparent that there is an extensive range of customisation to this 1995 K100G, which gives it a real old school express highway persona. 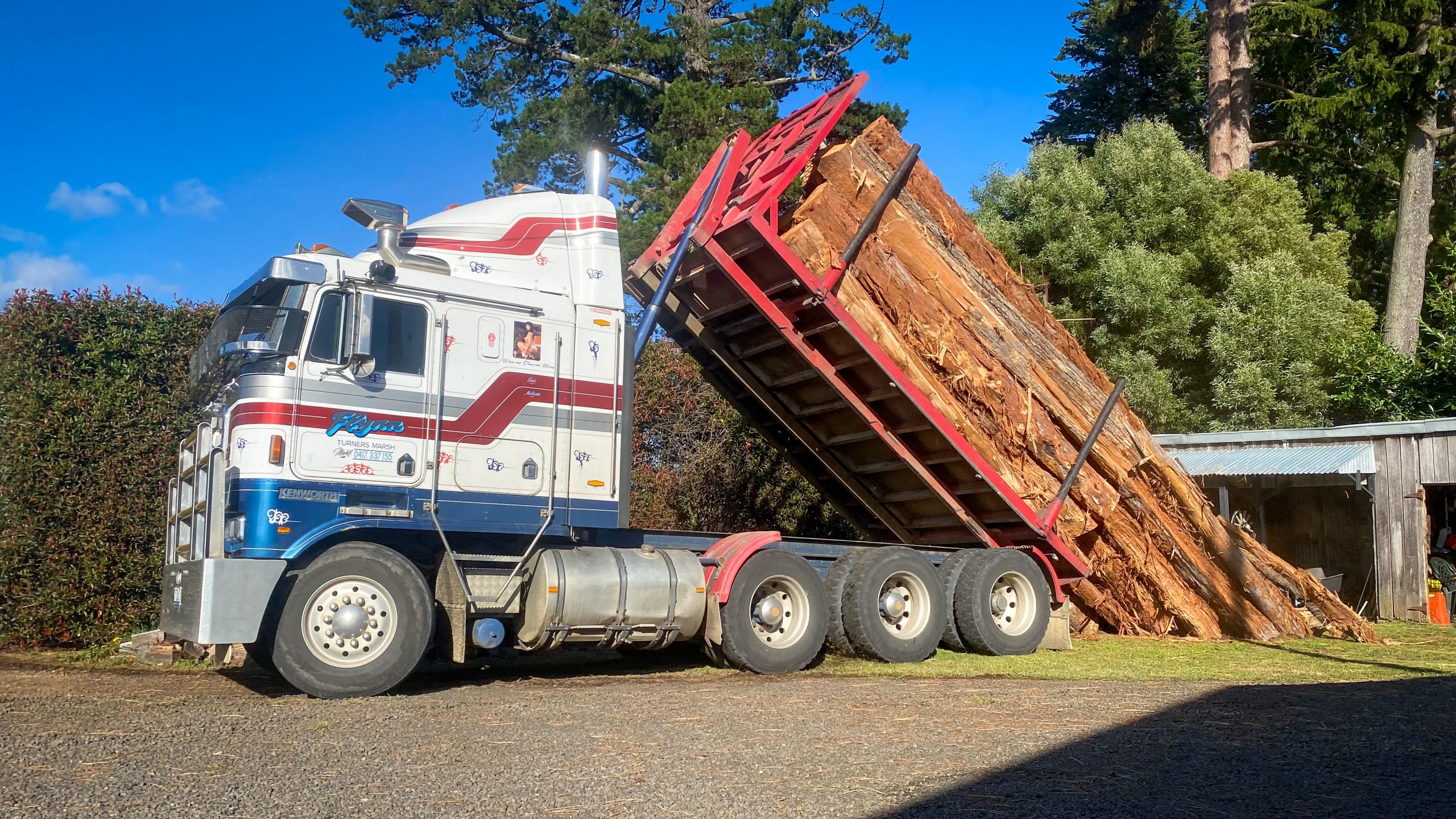 Tipping the load of logs off

The hand-rolled stainless drop-visor is most noticeable at the front, as are the ‘old school’ chrome “Haulin Ass” tags attached to the stone guard. Above the cabin loom the stainless twin air-intake rams that feed the Series-60 under the cab. Andrew said the intricate bends in the tubing were more time-consuming to construct than he first envisaged but added that the result was undoubtedly well worth the effort. Step around to the side, and the addition of a third axle to the drive group certainly makes this a unique unit, but more on that a little later. 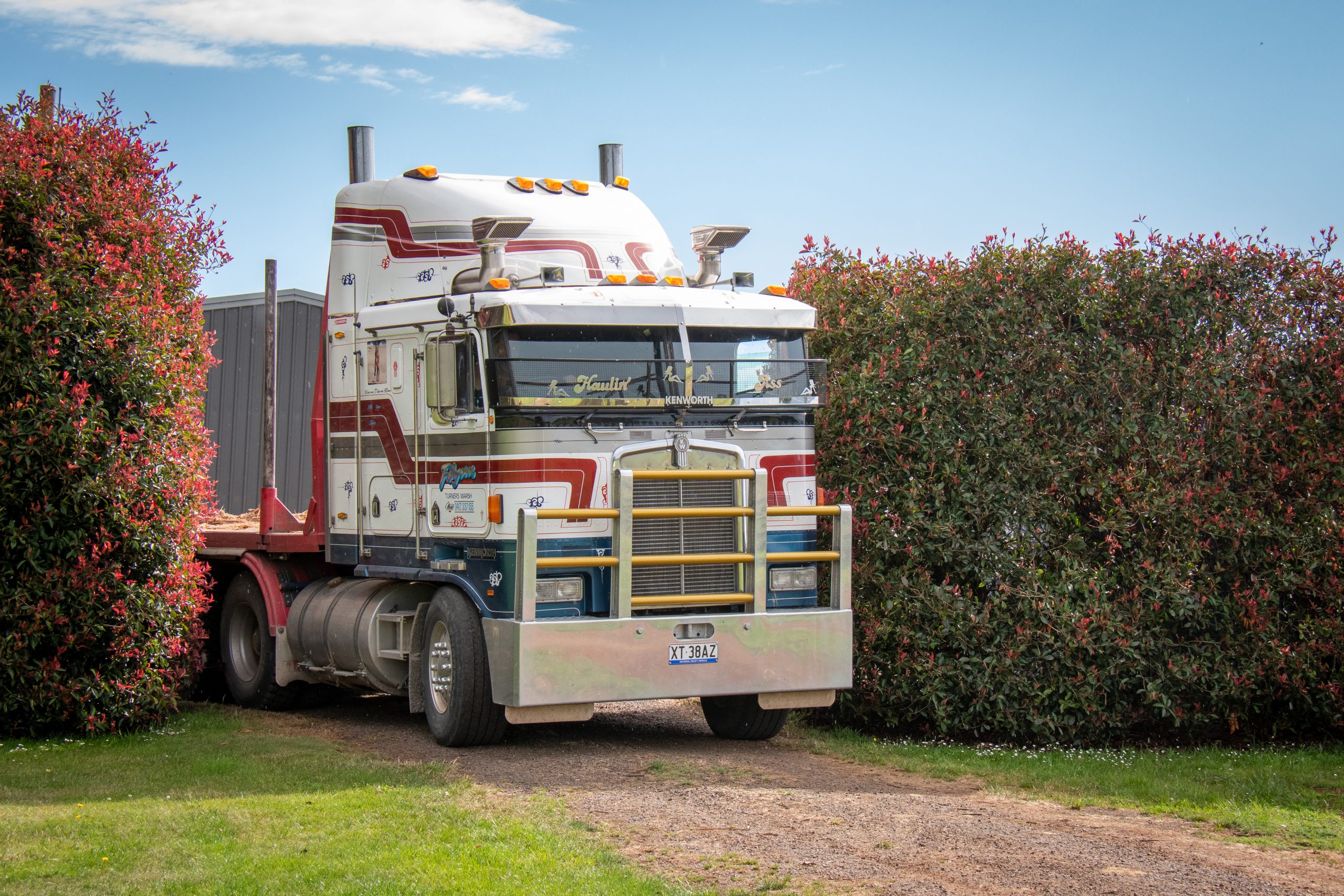 Incidentally, this K100G was built the same year Kenworth launched the model. Back in the nineties, Kenworth Managing Director Andrew Wright and General Manager of Sales Joe Rizzo had the extraordinary ability to predict market demands and trends the like we’ve not seen since. As a result, the K100G’s launch in 1995 coincided perfectly with the announcement of an additional two-meter length increase to B-Doubles from 23-meters to 25-meters. While many in the industry thought this additional 2-meters would permit greater competition and choice of vehicles, such as with European sourced setback front axle COE prime-movers, it did little of the sort. Instead, the K100G’s set forward front axle, spacious sleeper and light tare weight allowed it to dominate the market with greater productivity. So much so that operators could carry two more pallets in a K100G B-Double combination.

So popular was the K100G that at one point, fifty per cent of Kenworth trucks built at the time were K100Gs.

Because most K100G trucks were destined for intensive B-Double linehaul applications, they came specked with high horsepower and robust running gear. But, wind the clock forward to 2022, and the investment in that heavy-duty running gear is paying dividends for operators like Andrew, who are looking for an ex-highway truck with a solid backbone and heavy-duty running gear. And also, at a reasonable purchase price, that will leave enough funds to complete the extensive modifications required to transform the K100G for its next roll. 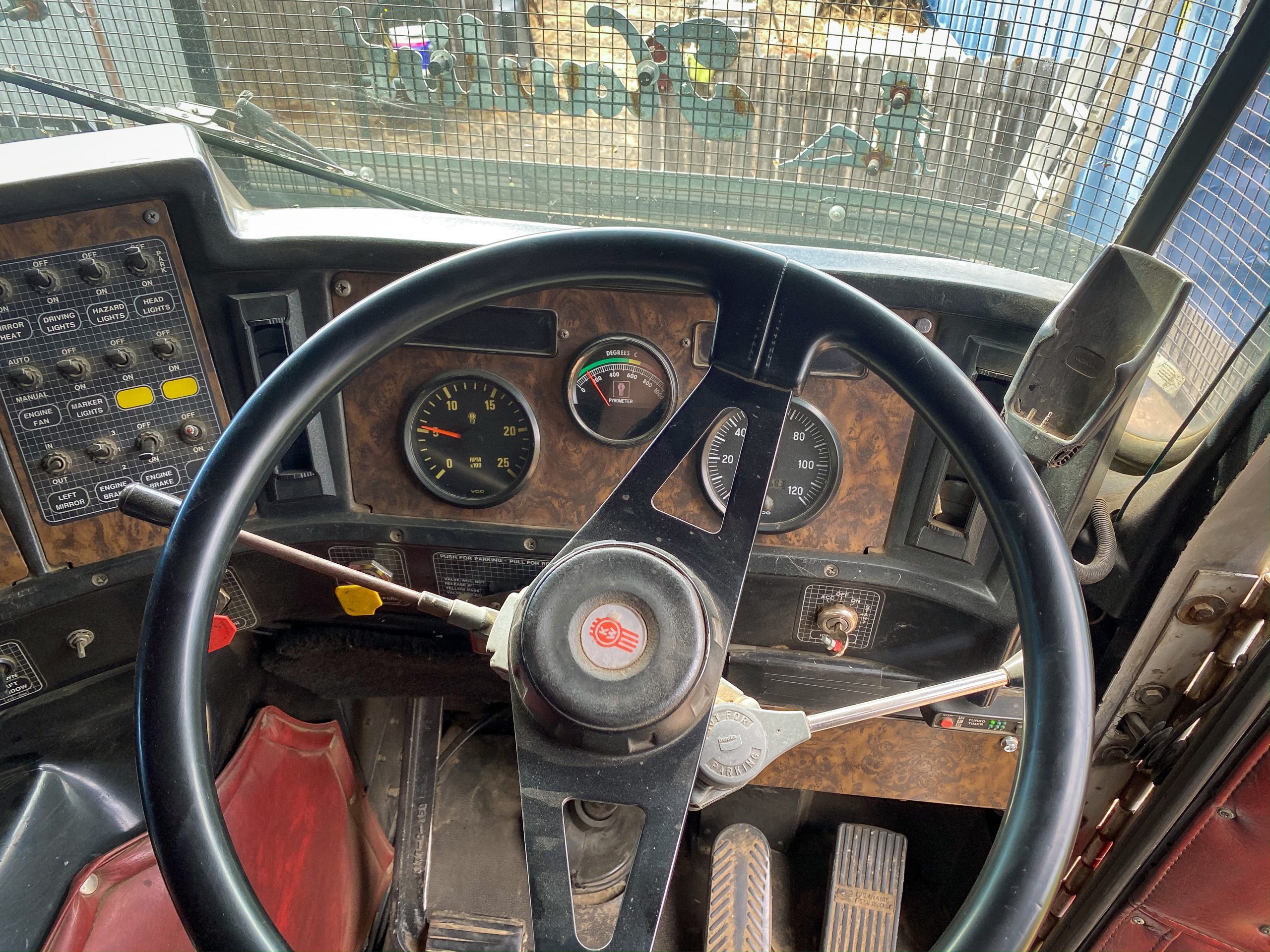 Upfront, under the cabin, is a Detroit Series-60 and judging by the crisp note it produces, it has all 550 ponies cracking. “It goes alright,” Andrew smiled when asked about how much power it delivers. A twin-plate 15-inch Eaton heavy-duty Easy-Pedal clutch connects the Detroit Diesel engine to the 18-speed Roadranger. A pair of Eaton DS-461-P at 4.56:1 ride on Kenworth Airglide suspension down the back.

This K100G certainly ticked all the boxes for Andrew in terms of truck specifications. 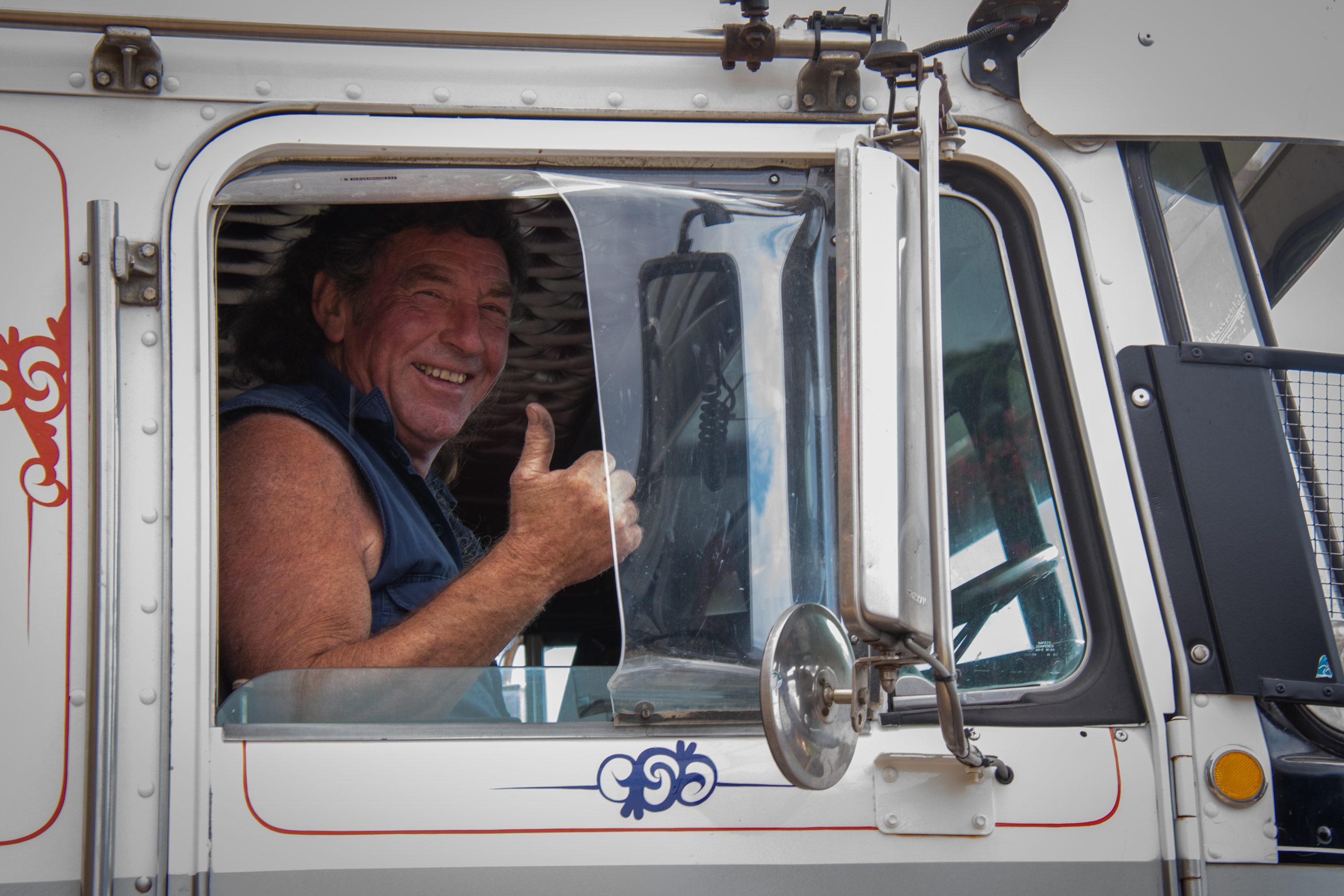 He admits that he did a lot of research, exploring short bogie and single axle stag type trailers before settling on the lift-up tag axle solution for the K100G. The new lift up tag axle moves the K100G into the NHVR 4-Axle rigid truck category, giving it a GML (General Mass Limits) of 26-tonnes up from 22.5-tonnes and raising it an additional one tonne when on CML (Concessional Mass Limits).

Engineering wise, Andrew said it did take some time to work everything out, and as expected, there were a few hoops to jump through before getting the green light to commence the build. For this K100G, Andrew used a TQA lift mechanism and axle assembly; however, on his next project, he scored a second hand Hendrickson HLM-2 series liftable suspension and said there is little difference between the two. 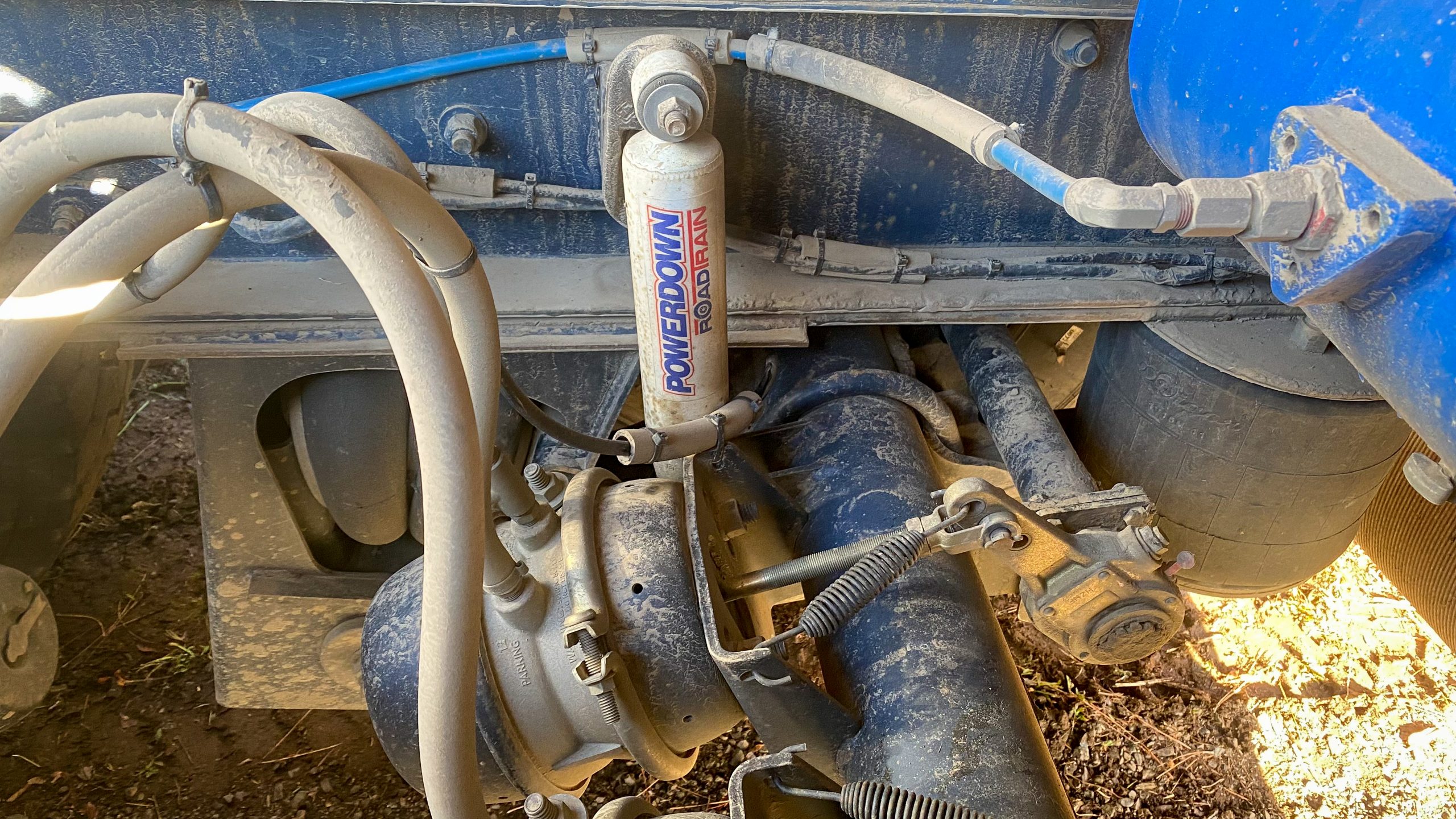 The TQA and HLM-2 liftable suspensions are load sharing when paired with the prime mover’s drive air suspension. They can raise the axle 150mm and the assembly positioned in either a pusher or tag axle configuration. The installation kit includes an auto raise and lower air valve, which automatically lowers or raises the axle when a pre-determined load is put on or taken off the truck.

Weight wise, the complete lift assembly, including the axle, brakes, drum, wheels and tyres is 902 kilograms, effectively giving a 2.5 tonne payload advantage on GML and 3.5 tonne on CML.

“The ride and handling have indeed improved since installing the lift axle,” Andrew said. “These logs have a very high centre of gravity, and on the high camber narrow roads around the northeast, you certainly had to drive steady and have all your wits about when it was only a bogie drive. And that was with less payload, too,” he added.

“When I’m in the bush or in wet greasy paddocks where it’s hard to maintain grip, I can manually release the air out of the tag axle air-bags, which puts more weight onto the two drive axles to enable better traction.

“Overall, I’m very pleased with how the tag axle is working out,” Andrew concluded. “It is certainly a lot better to drive. But most importantly, it has increased productivity, and my customers are happier with the loads I’m bringing them. Of course, you’ll have to come and check out the 8-wheeler I’ve nearly finished. It will be a head-turner when it finally hits the road in a few months. But that’s enough talking for now. Those logs won’t cut themselves.”

What to look for when buying a used truck