No Compromises for this heavy specked Goldfields Road Train. 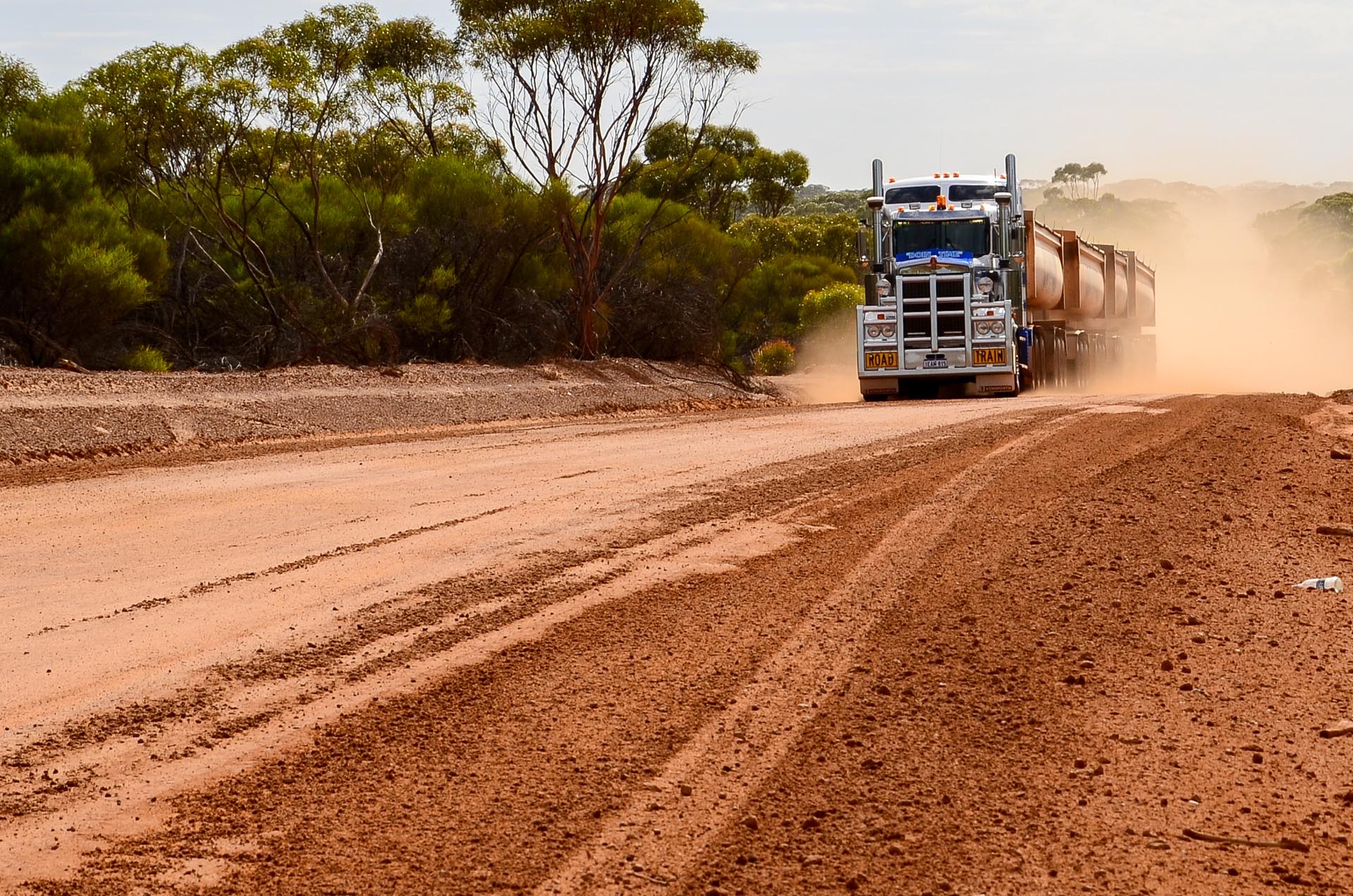 There is a fine art in specifying an extreme heavy-duty truck that is robust enough to endure the off-highway punishment of mine site corrugated haul roads and rough bush exploration tracks, yet light enough to deliver a viable payload. We sent Howard Shanks to Western Australia’s goldfields to investigate this art.

Kalgoorlie’s industrial hub operates in full swing 24-hours a day, 7-days a week. In the small hours of the morning, fitter’s rattle guns echo through the streets while a constant parade of quad side tippers rumble through town as drivers come and go as they rotate on their rolling shifts.

Over the east coast of the country, most folks were still snuggly tucked up in their beds. But here in Kalgoorlie, in the predawn greyness. The mercury in the thermometer was about to creep into the thirties.

“He’ll be down on the wash bay,” the receptionist smiled when I mentioned that I had an appointment with Gammon Haulage owner, Craig Gammon.

Craig Gammon, or “Gammo”, as most folks in the Goldfields know him, is passionate about keeping his truck looking new, and that’s no small feat given that most of the time, this T909 operates on the red dirt tracks in the remote goldfields’ region of Western Australia. 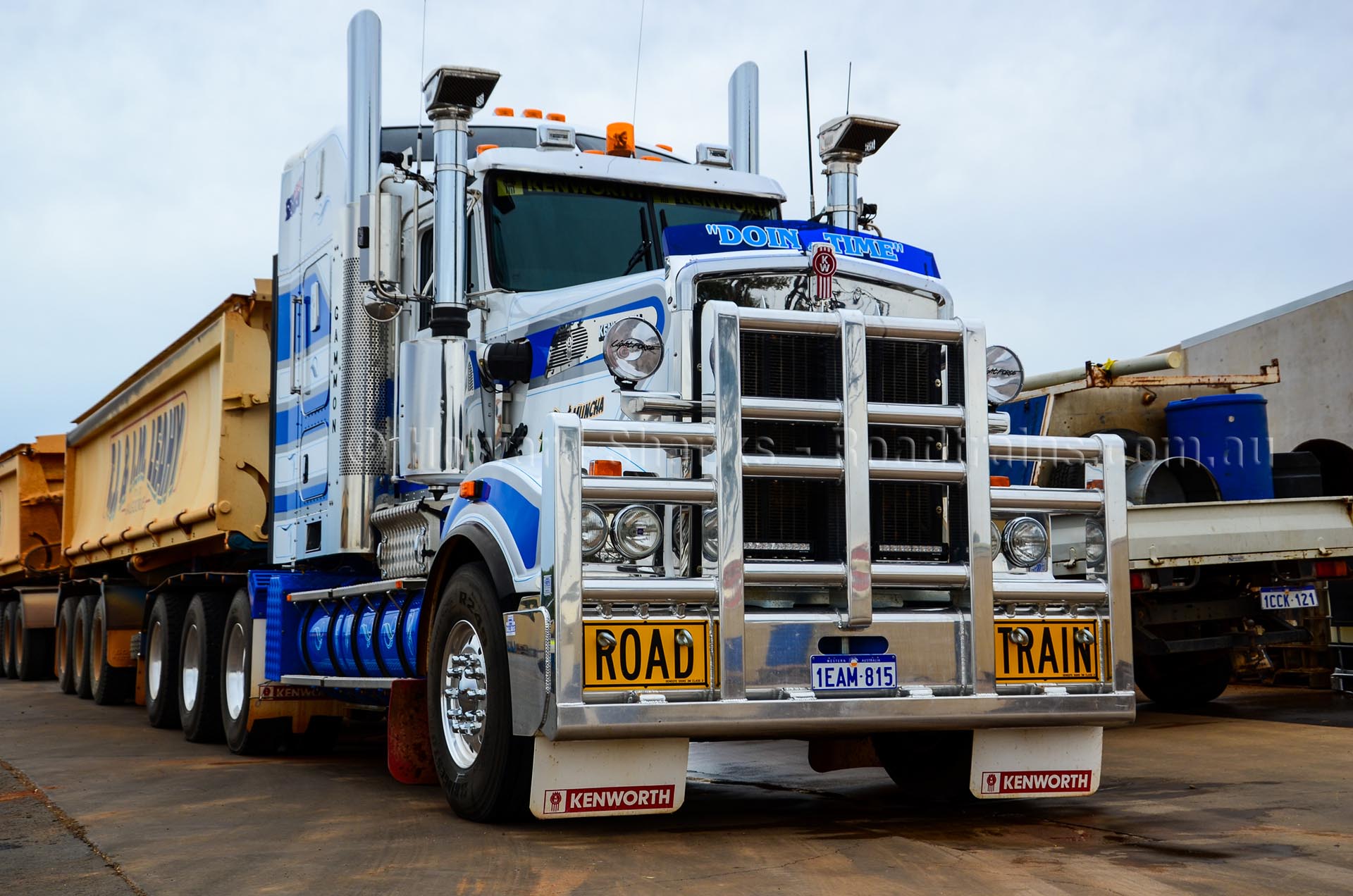 Sure enough, just as the receptionist had advised, Craig T909 sat parked on the wash bay. Meantime, the man himself was busily spraying his homemade cocktail blend of truck-wash detergent and kerosene over the truck.

“You found the place alright then, Craig smiled, glancing in my direction as he continued waving the spray wand in an up and down motion. “This won’t take long.”

He explained how he sprays his mix of detergent and kerosene over the Kenworth then let it soak for a few minutes, this technique rapidly removes the bitumen and road grime. He says that he uses this method during the week when the truck is busy on double shifts, like today. But he assures us that he gives it a thorough sponge wash on weekends. 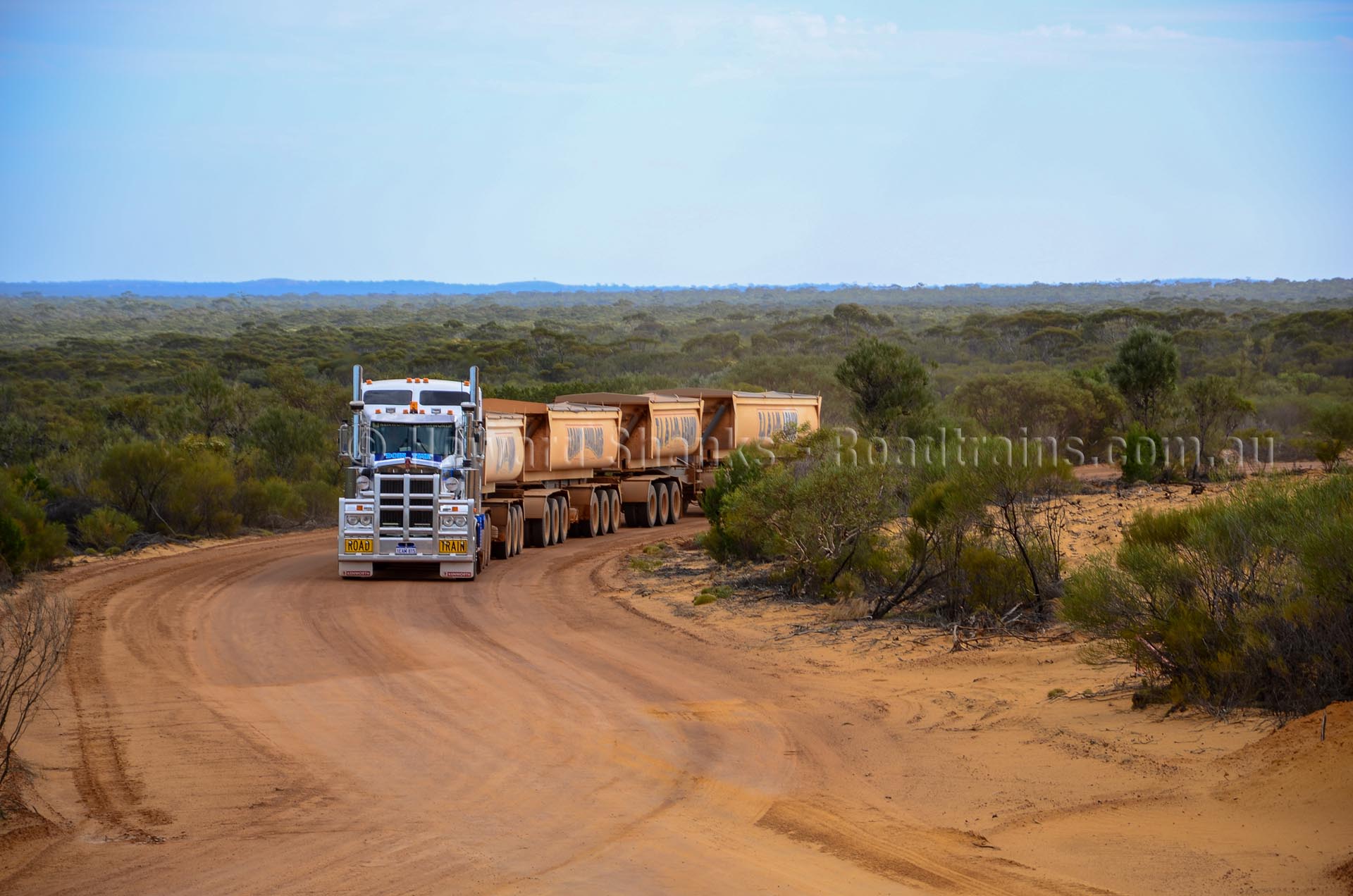 Half an hour later, we were well on our way to the old abandoned Bonnie Vale townsite, roughly 14 kilometres north of Coolgardie, to load sand for the nickel smelter back in here in Kalgoorlie.

As Craig guides the T909 into the sandpit, it is hard to imagine that back in 1897, out here in this barren wasteland, the town of Bonnie Vale was gazetted. It was apparently named after a prospector called Bonnie picked up a 7-oz (220-grams) nugget back in May 1894, which at today’s gold prices would be USD 12,320. Today there are few remains of the township of Bonnie Vale, other than it serves as the railway station for nearby Coolgardie on the Perth to Kalgoorlie passenger service that’s aptly called “The Prospector”. 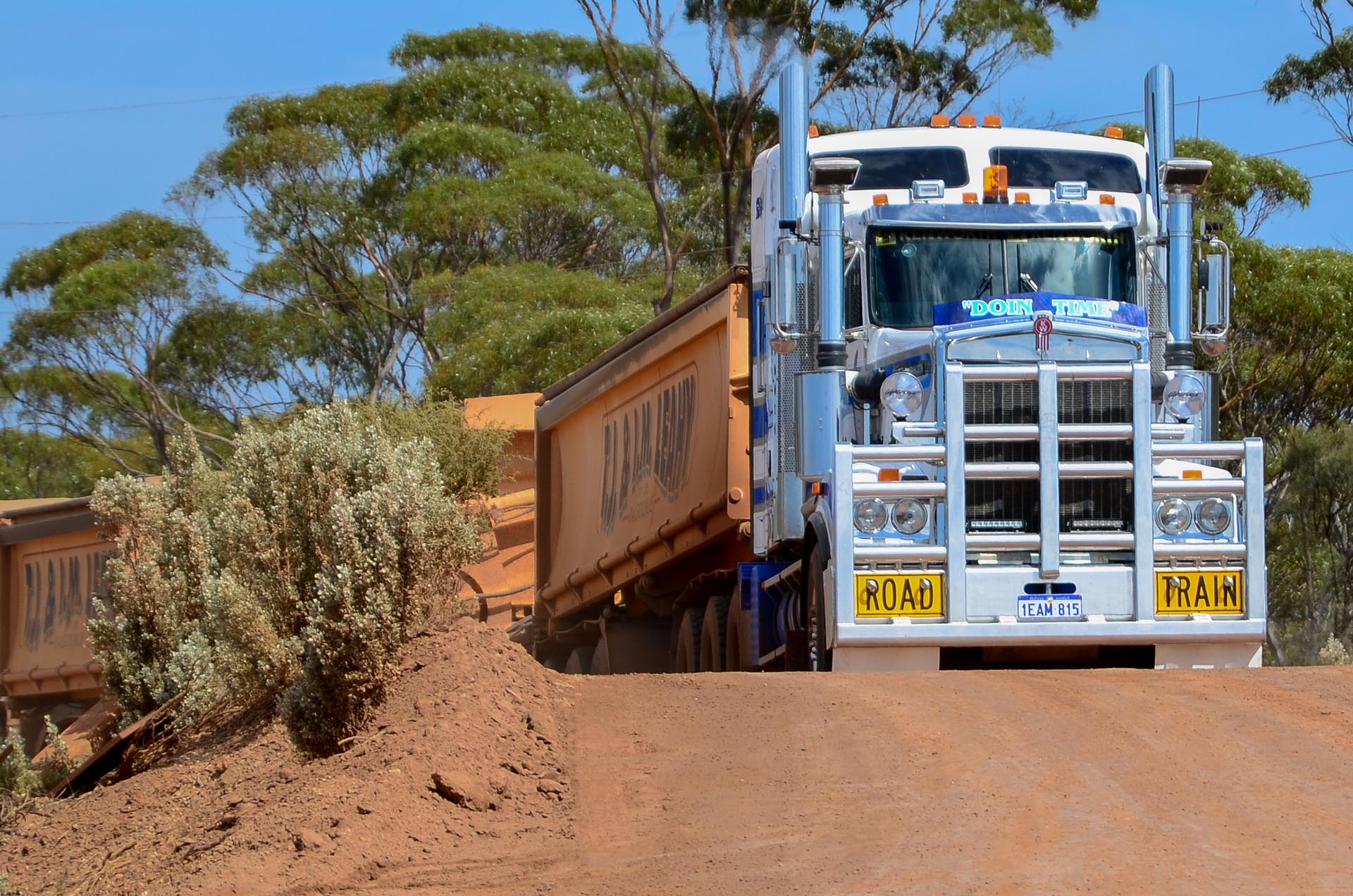 The sand in this pit is 98 per cent silica, highly sought after in the nickel smelting process, and predominantly used as furnace flux. Today, nickel smelting often occurs with flash smelting, when electricity and oxygen combine to quickly reach the high temperature needed to melt the nickel ore. That is an incredible 1,453° Celsius or 2,647° Fahrenheit in the old scale.

The nickel ore melts until it becomes a product known as liquid matte, which is usually around 45 per cent nickel and 55 per cent slag and other metals. After the nickel smelting is complete and cooled, it gets used for many different purposes. Once the removal of slag occurs, the remaining product gets sold to other industries. For example, nickel is commonly used as an alloying agent with steel and other metals because it is corrosion-resistant and ability to be highly polished when required. 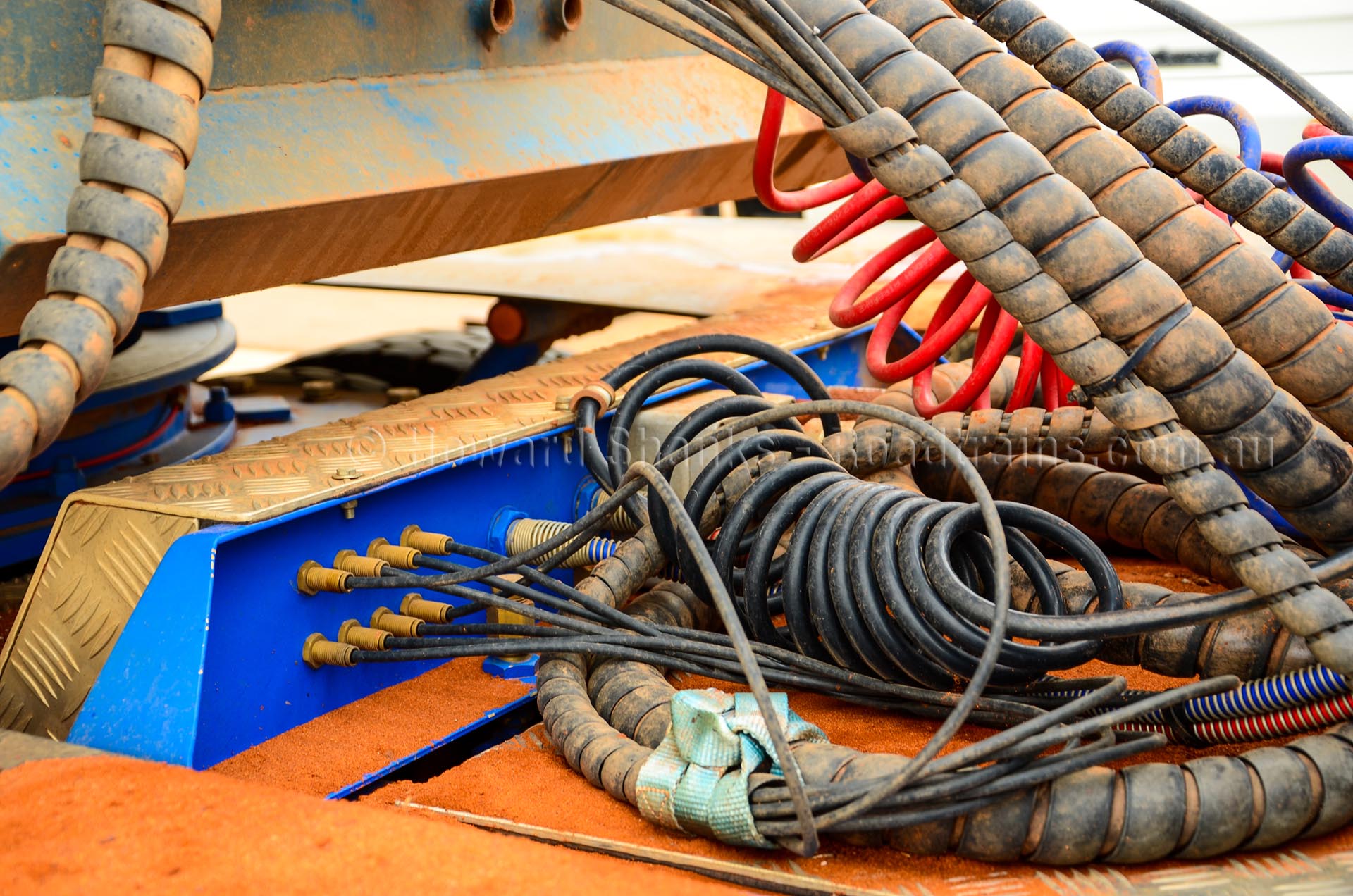 Craig pulls the road train in a straight line parallel to the pit wall the wanders over to the loader. This wheel loader has a 15-litre engine that produces 350 horsepower and develops 1244 foot-pounds of torque, which runs through a 4-speed power-shift transmission that allows operators to choose between manual or automatic shift modes. In addition, it boasts onboard scales built into the lift arms to allow on-the-go weighing of the material in the bucket. This feature allows operators to load trucks more accurately and efficiently. In addition, the bucket scoops up to five cubic meters of sand at a time.

Craig said that this dry sand weighs roughly 1600 kilograms per cubic meter which means he is tipping about 8-tonne of sand into the trailers with each bucket full. He wastes little time on loader and puts four generous buckets in each of the full-length trailers and two buckets in the shorter A-trailer. All the while, he checks the weight with the loader’s onboard scales.

It takes roughly half an hour to load three trailers and roll out the tarps. 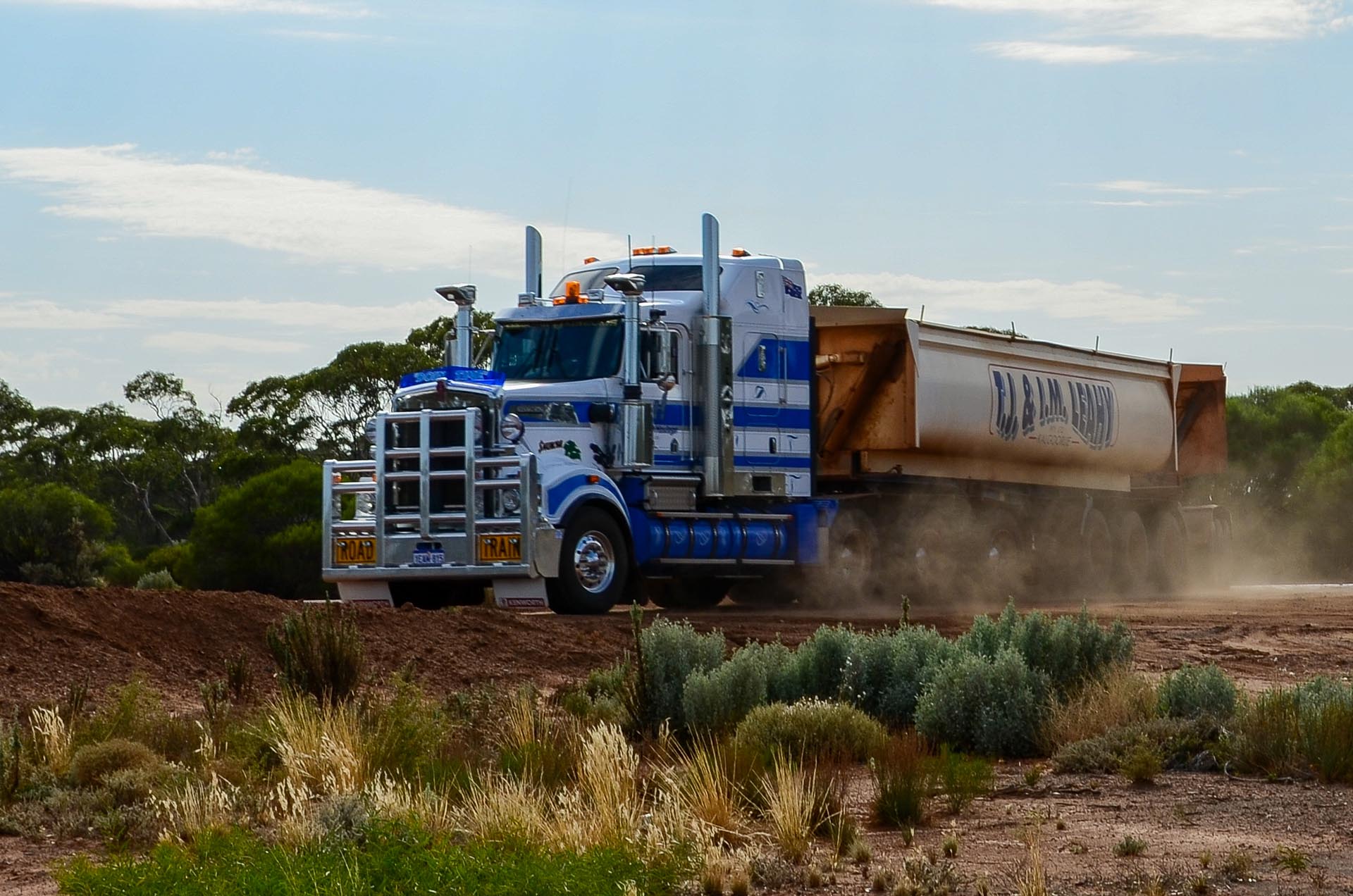 Then it was time to get down to the business side of the operation. We were here to investigate how the big-bore Cummins handled getting 170-tonne and 86 wheels rolling in soft sand.

The soft sandy road base here in the pit makes it hard for any truck to get rolling. But Craig has all the power dividers engaged to ensure each axle is getting power. In no time at all, the engine is working at 100 per cent capacity. The turbo boost gauge needle hovers up at 260 kilopascals. In the cabin, you can hear the air getting sucked down the high-rise air intakes as the big 15-litre Cummins gobbles up to 45,000 litres of air per minute when he has the throttle fully opened up.

It’s well worth checking out the gauges in the dash of this unique T909 because you don’t often see such a well-optioned and practical dash package like this these days. 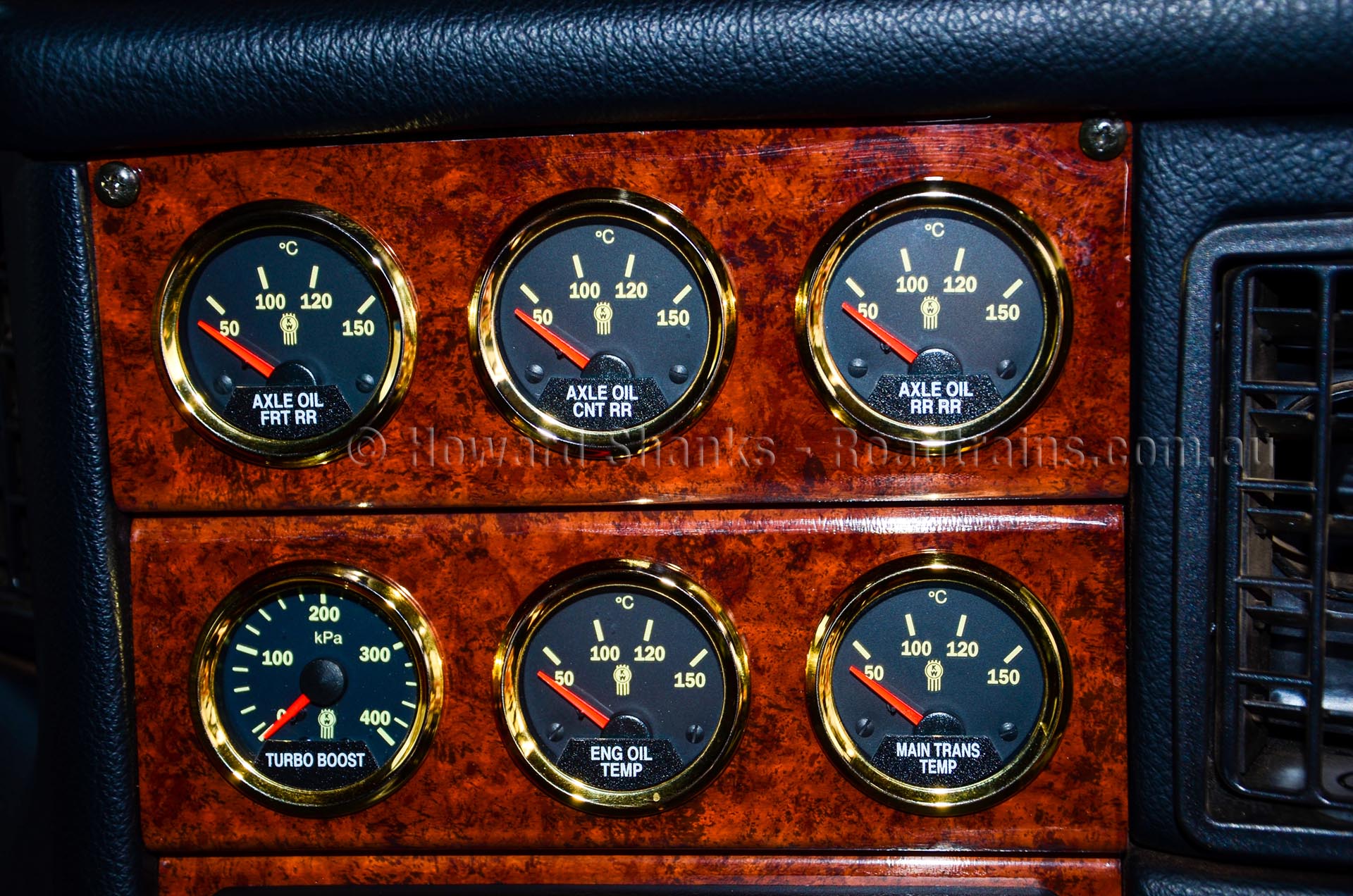 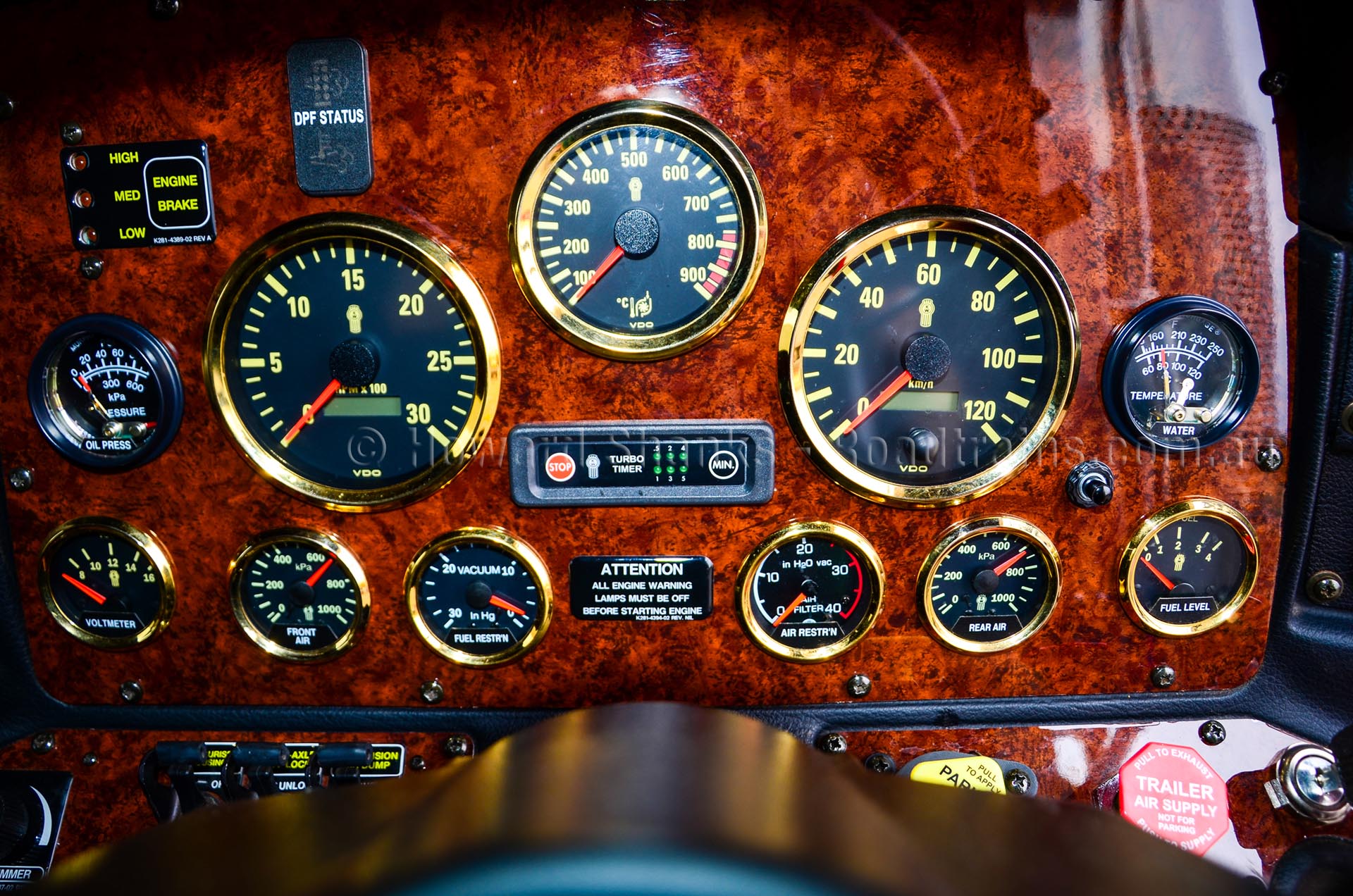 There are two “Murphy” switch gauges on the main centre dash panel with black bezels. They are paramount for operators, Craig, and it’s worth spending a moment investigating how they work and why these gauges reside prominently in the main dash panel.

The Murphy switch-gauges first appeared in the late 1930s, and their popularity quickly ensued due to their robust, simple design, ease of adjustment and simplicity for operators to test.

What makes the Murphy switch gauges, so reliable is their full mechanical operation. They don’t require temperamental sensors or electrical wizardry to function. Both the pressure and temperature models are diaphragm-actuated, with built-in electrical switches that can trip alarms or shut down equipment if required. 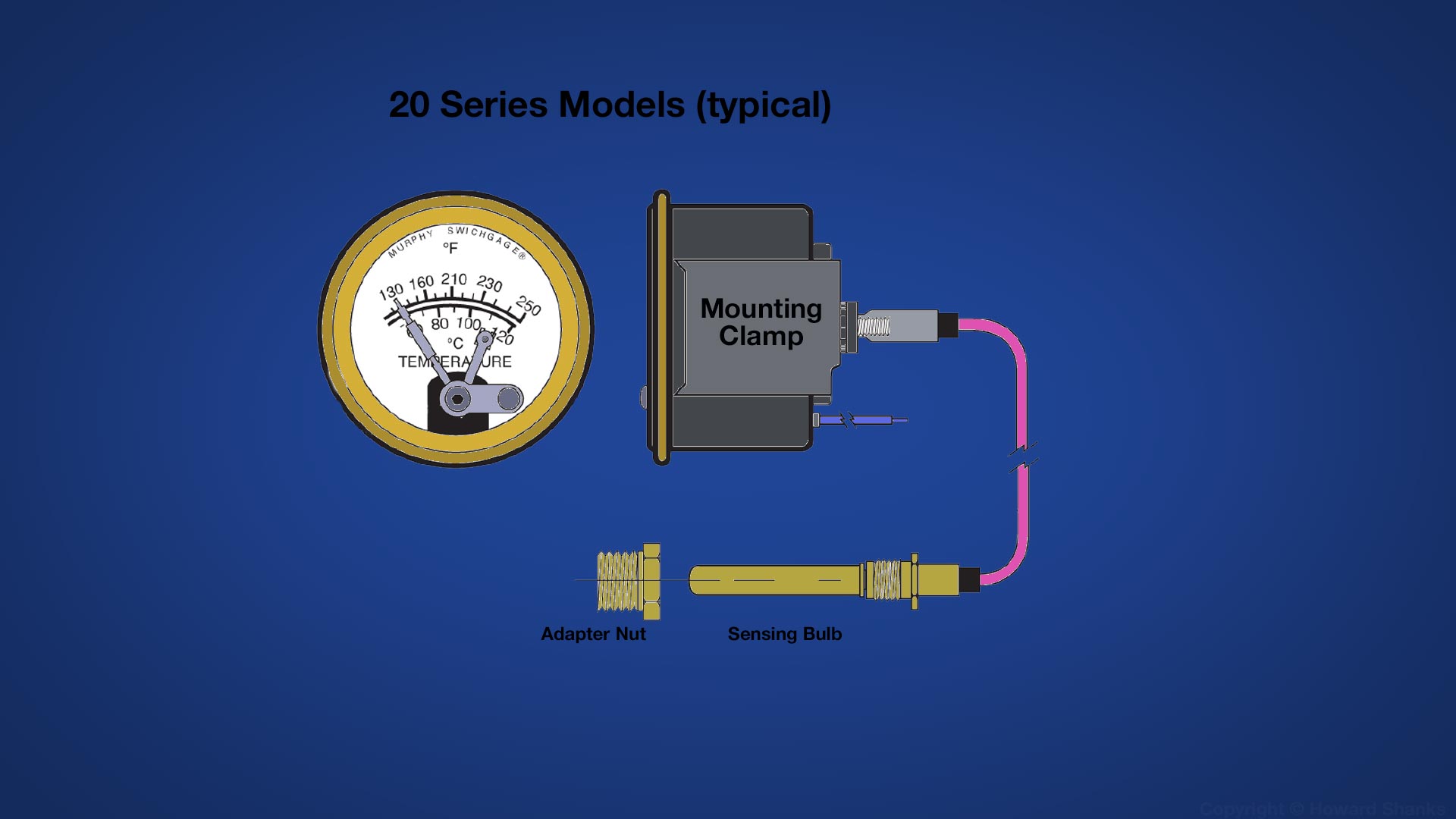 These vapour-actuated gauges feature a sealed capillary tube and a sensing bulb. When subjected to heat, the liquid in the sensing bulb changes to vapour, creating pressure against the diaphragm mechanism. The diaphragm translates this vapour pressure into a mechanical gauge reading. Meantime, the gauge pointer acts as a pressure or temperature indicator (depending on the gauge) and as one switch pole which completes a circuit when it touches the adjustable limit contact. As a result, the contact gets grounded through the gauge case. A corrosion-resistant coated steel case encloses the gauge’s mechanism. The lens is constructed from break-resistant polycarbonate, for added protection, and the gauge is available with a polished, stainless steel or black bezel. Importantly these gauges have a self-cleaning motion to enhance electrical continuity. 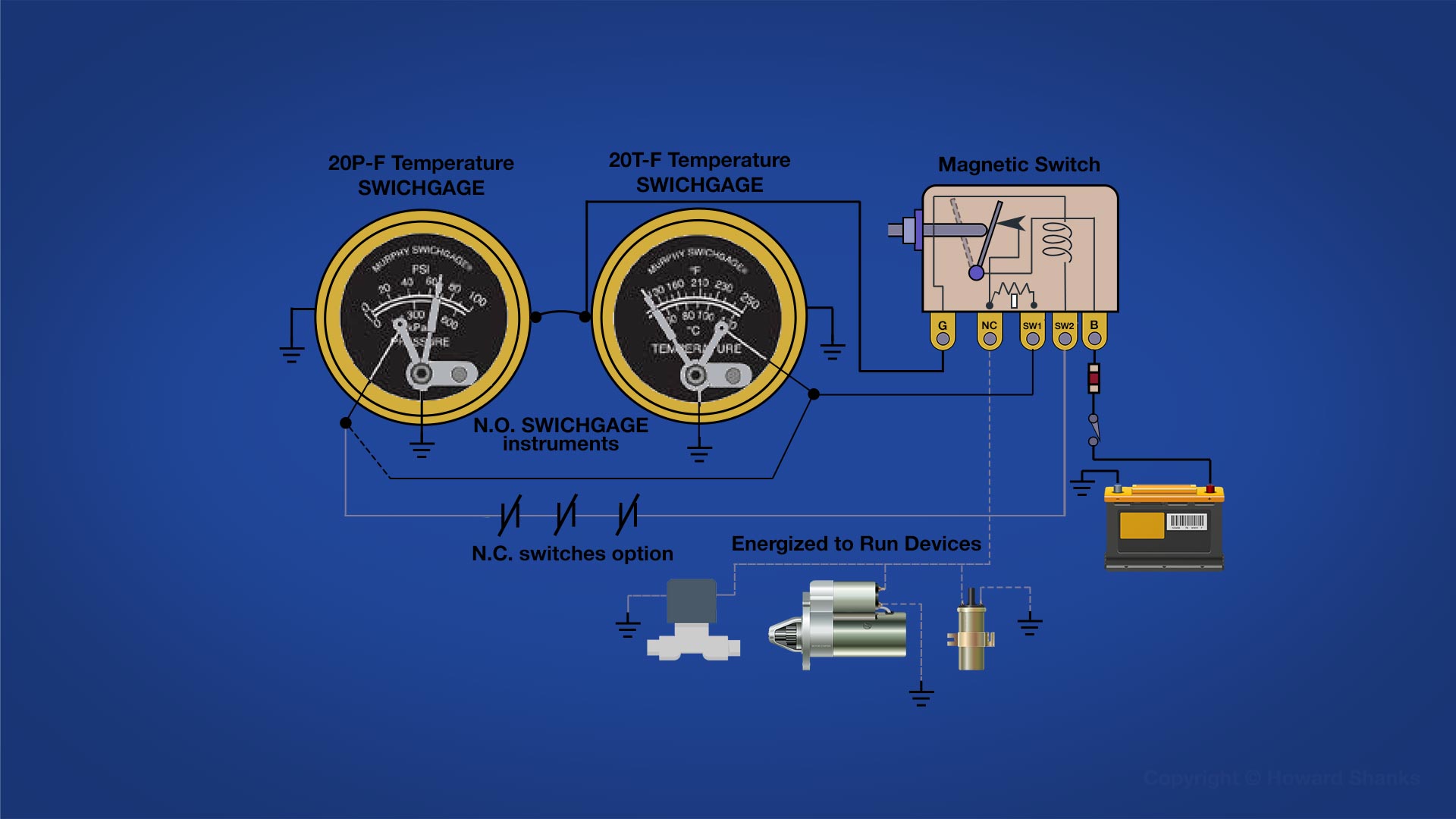 Thankfully today, even with the mercury nudging 44-degree, the Murphy gauges didn’t sound any alarms. Still with all this weight, the coolant temperature sat comfortably at 97 degrees Celsius.

Also, it’s worth looking at how the transmission radiator-cooler mount is concealed into the construction of the front of the rear mudguard bracket. All this extra thought that Craig meticulously put into this truck’s detailed specification is what makes it so unique, productive and durable. 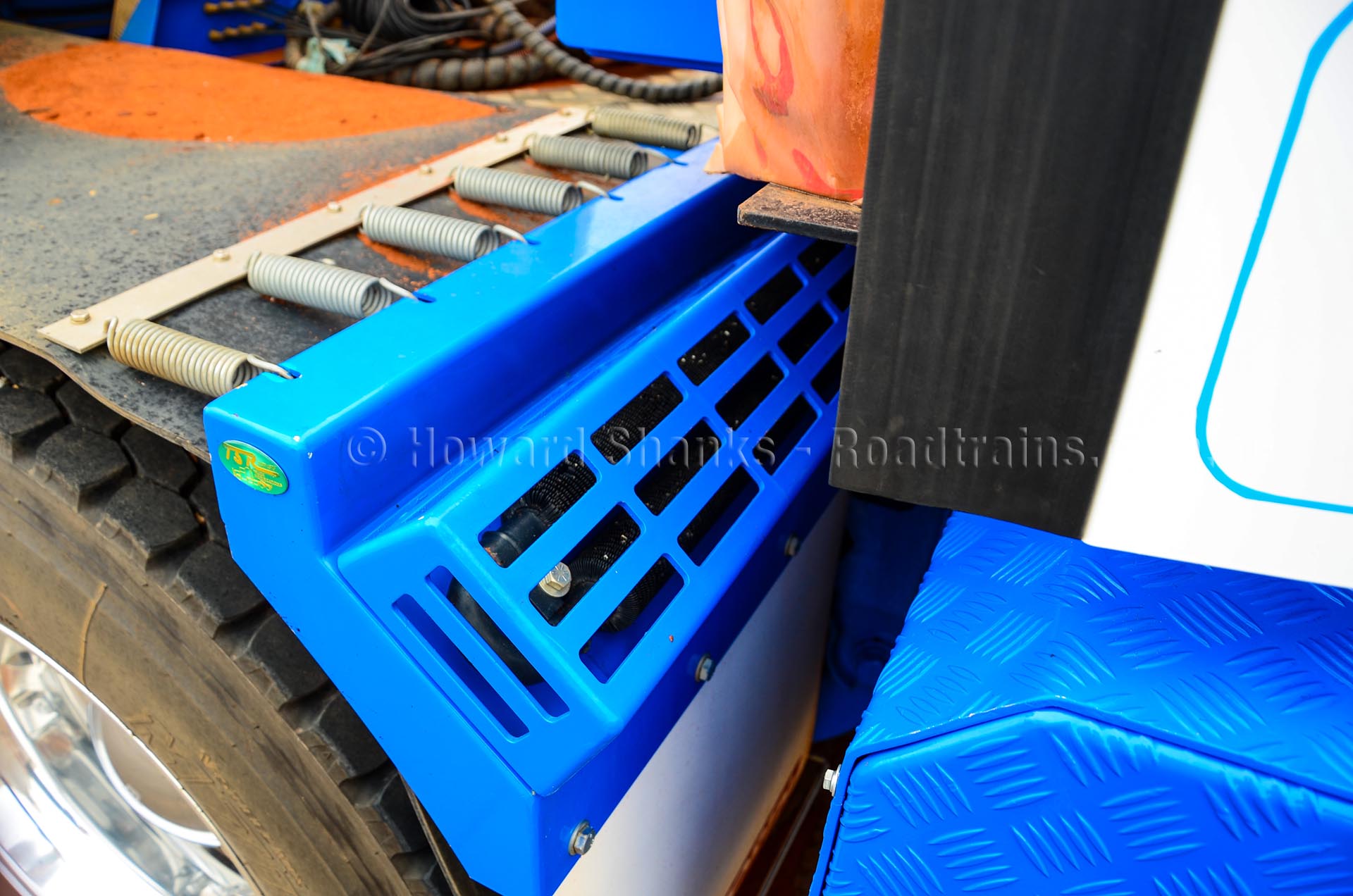 “It’s all about keeping the running gear cool,” Craig explained. “It’s certainly not your average run of the mill Kenworth. There some good engineering outfits here in the West that really know how to fine tune these trucks to survive in our conditions. The cooler we can keep the components the longer they live out here.” 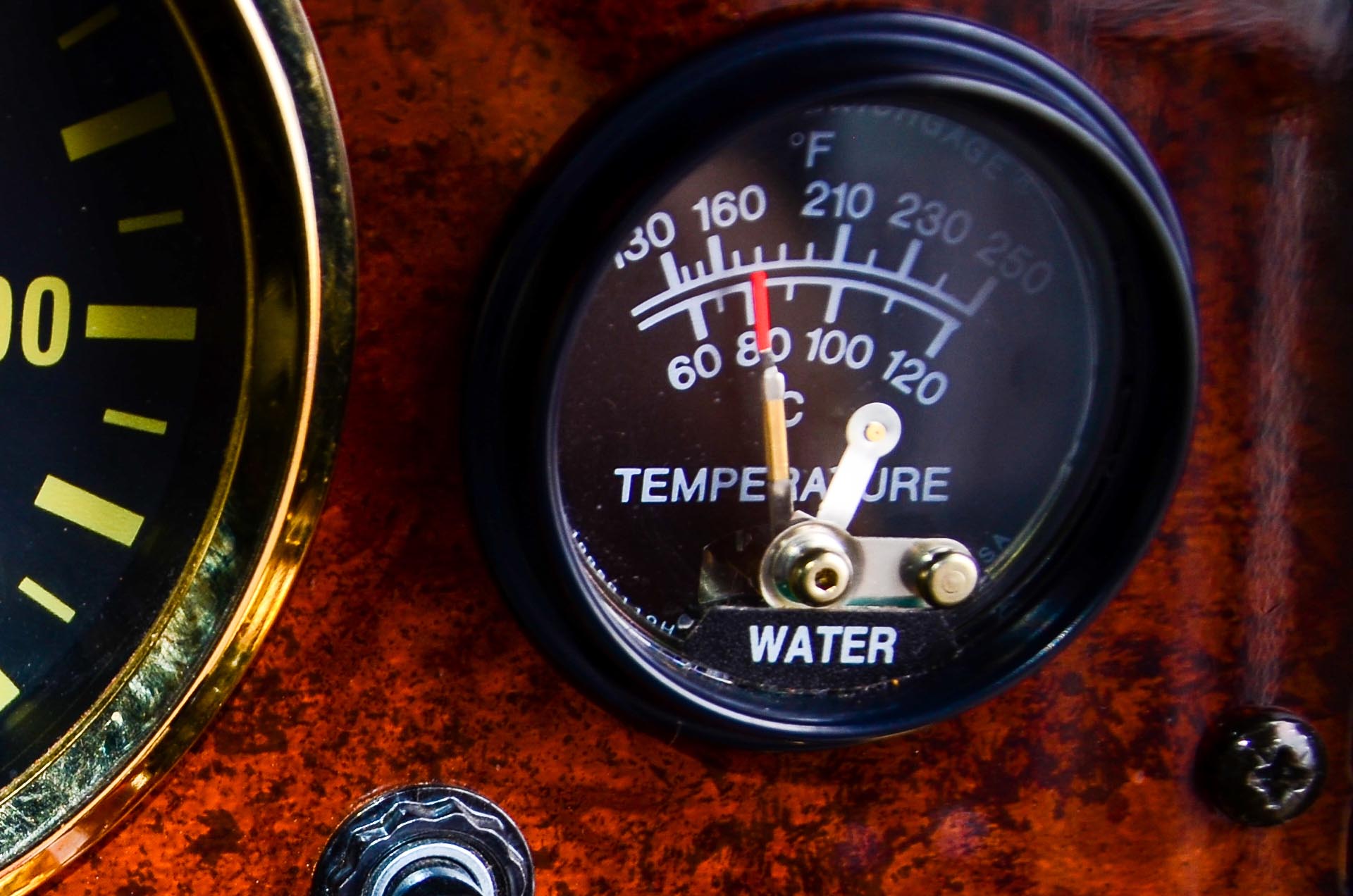 The decision to specify traditional hypoid drive rear axles over the heavier duty hub-reduction rears, was one he deliberated on for some time. “There are two big dis-advantages for me with hub-reduction rear axles in my operation. Firstly, in a tri-drive configuration they add a lot to your tare weight. If we operated solely off road on mine sites then the hub-reduction rears might be the better option. Secondly, the hub-reduction rears get extremely hot and will prematurely destroy the outer planetary drive if they are driven over 80kph for extended periods such as with on highway driving. These Meritor drive axles, on the other hand, have more than proven there worth in this country. That’s why I chose the Meritor rear axles, for a tare weight advantage and on-road productivity gain.” 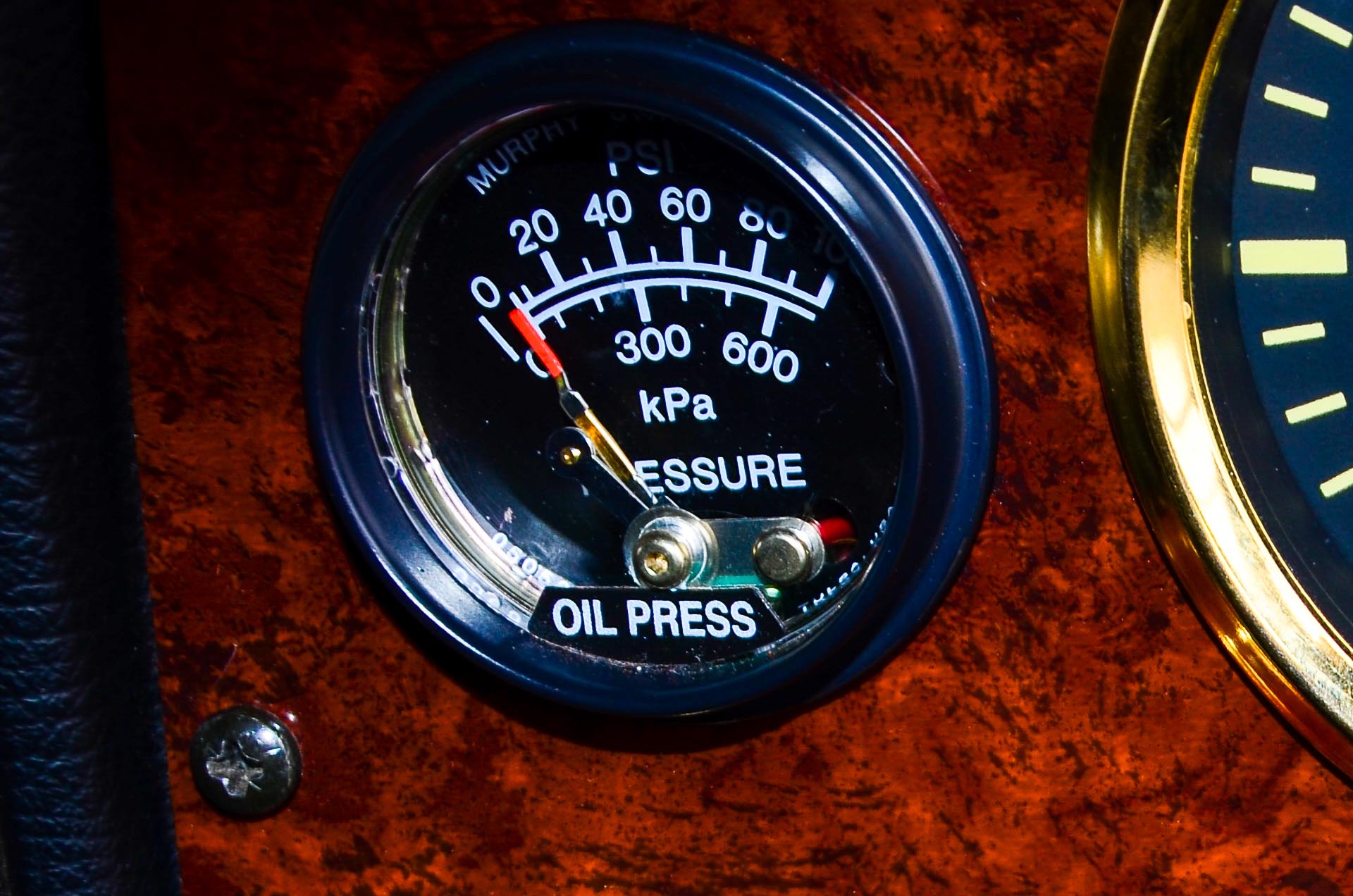 “It certainly wasn’t a cheap exercise, that’s why it’s got the ‘Money Muncher’ written in the side of the bonnet, ” Craig said. “But I’m expecting to get 20 years out of this truck, with a scheduled major overhaul at 10-years. It’s the big picture that I’m looking at with this venture. That’s why it’s worth investing in premium gear like the Murphy Switch Gauges to help protect my investment. 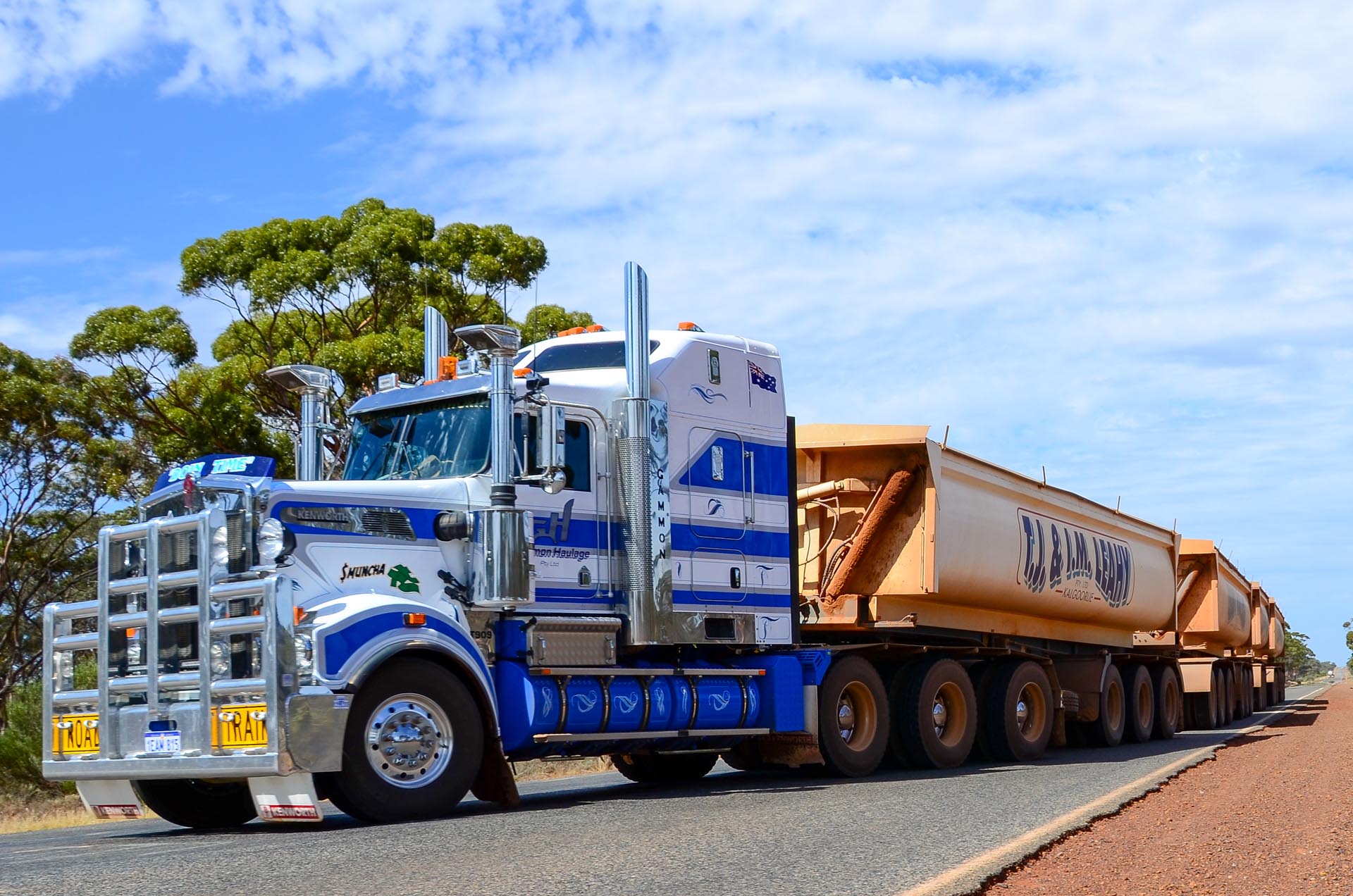