Words and photos by Howard Shanks.

Heading up the Lynd Road in Far North Queensland has until recently been a treacherous ordeal along a narrow pot holed road. Today, it’s all bitumen and there are fewer potholes, nevertheless it has still retained some of its notorious heritage which still tests both the men and machines that dare to venture up its path as Howard Shanks discovered. 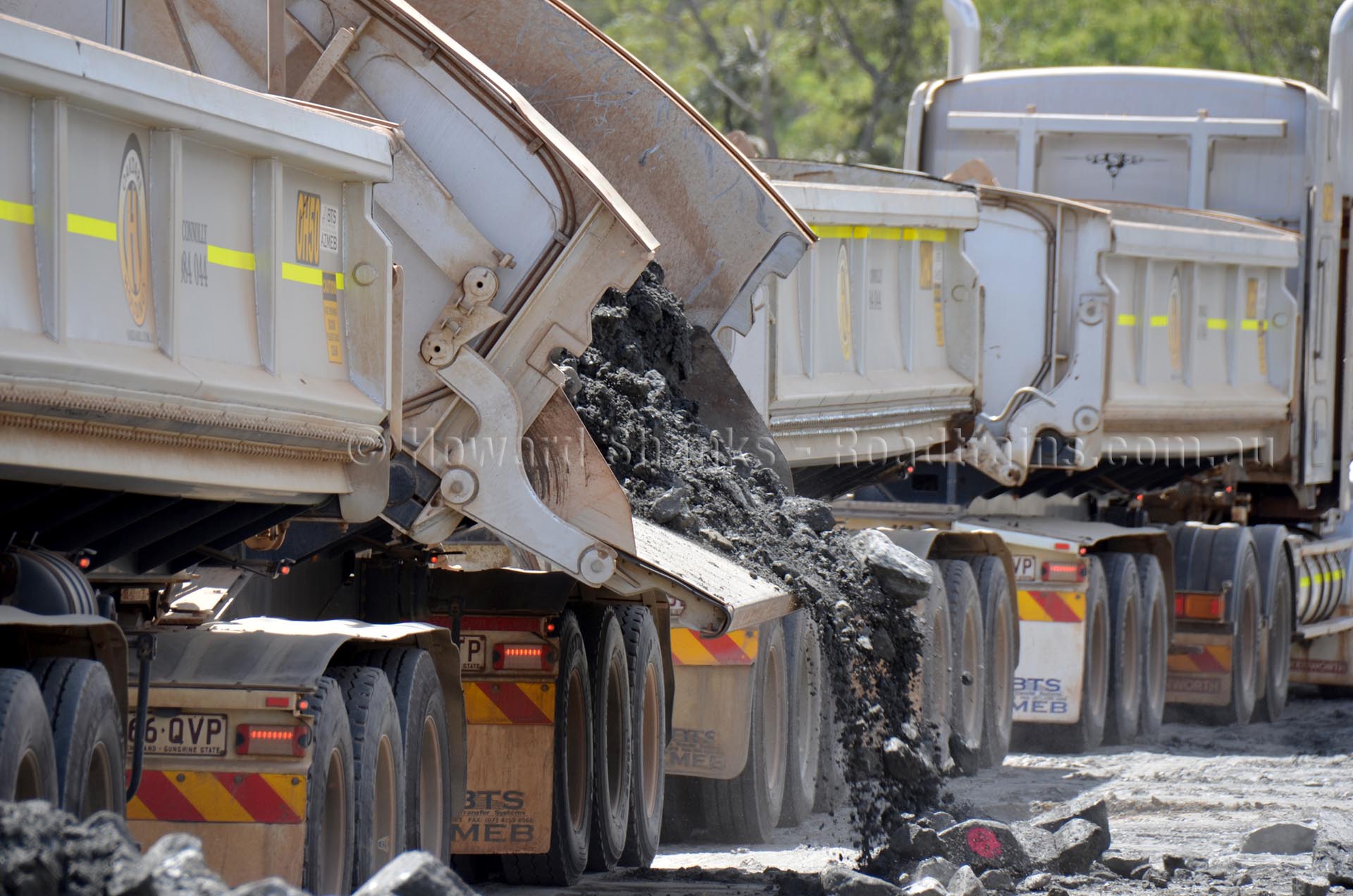 The Lynd Road as the locals call it stretches from Charters Towers, 260 kilometers north to the Lynd Oasis Roadhouse where it forks; to left, it leads north west up into the Gulf Savannah country and to the right it heads north east onwards to the mining town of Mt Garnet a further 180 kilometers up the road.

The darkness of the night gradually subsided as sun’s gentle rays began to peer over the horizon when I veered off to the right at Lynd Junction. I was making good time to arrive punctually at my prearranged mid morning rendezvous with Oakdare Holding’s Michael Connolly at Mt Garnet to see first hand the efficiencies they’re getting from their Azmeb quad door side tippers.

Michael is the Business Development Manager for Oakdare Holdings – Bulk Haulage and Civil Construction operation that includes their Mt Garnet Operation. Michael’s parents Wes and Kristine founded the company in December 1990 with the amalgamation of W & K Connolly Earthmoving and Jack’s Livestock and General Transport. 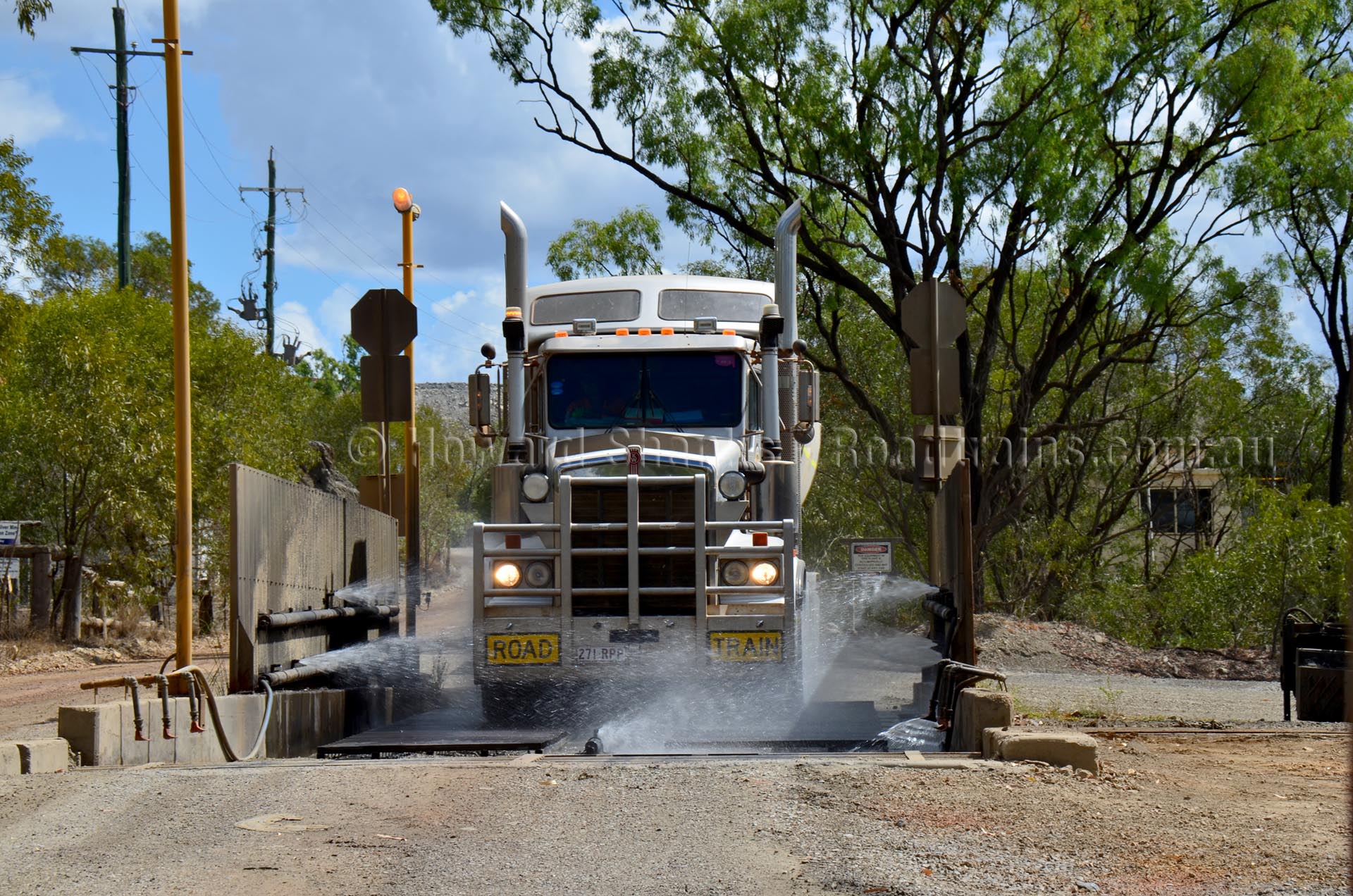 Like many self made family businesses Oakdare Holdings pride themselves on their impeccable service and reliability as well as their ability to provide unique transport solutions to their clients. One of their specialty services is their ability of working in remote locations at short notice, which includes the supply of self-sufficient site camp and maintenance facility.

Their Mt Garnet operation highlights this fact and looks after the transportation of approximately half a million tonne of mined ore from the Surveyor mine near Lynd Junction to the Mt Garnet processing plant. As well as feeding the crusher at the processing plant with the ore they haul in. Oakdare Holdings also haul approximately 70,000 tonne of processed ore from Mt Garnet on a grueling 560 km trek via Charters Towers to the Port in Townsville.

Glancing around the yard it’s quickly apparent that high productivity combinations dominate this fleet. “There’s not a single trailer outfit anywhere in the fleet,” Michael reveals. Citing their long time involvement with the multi-combination vehicles trials in Queensland as the point where productivity and efficiency found new focus within the business. 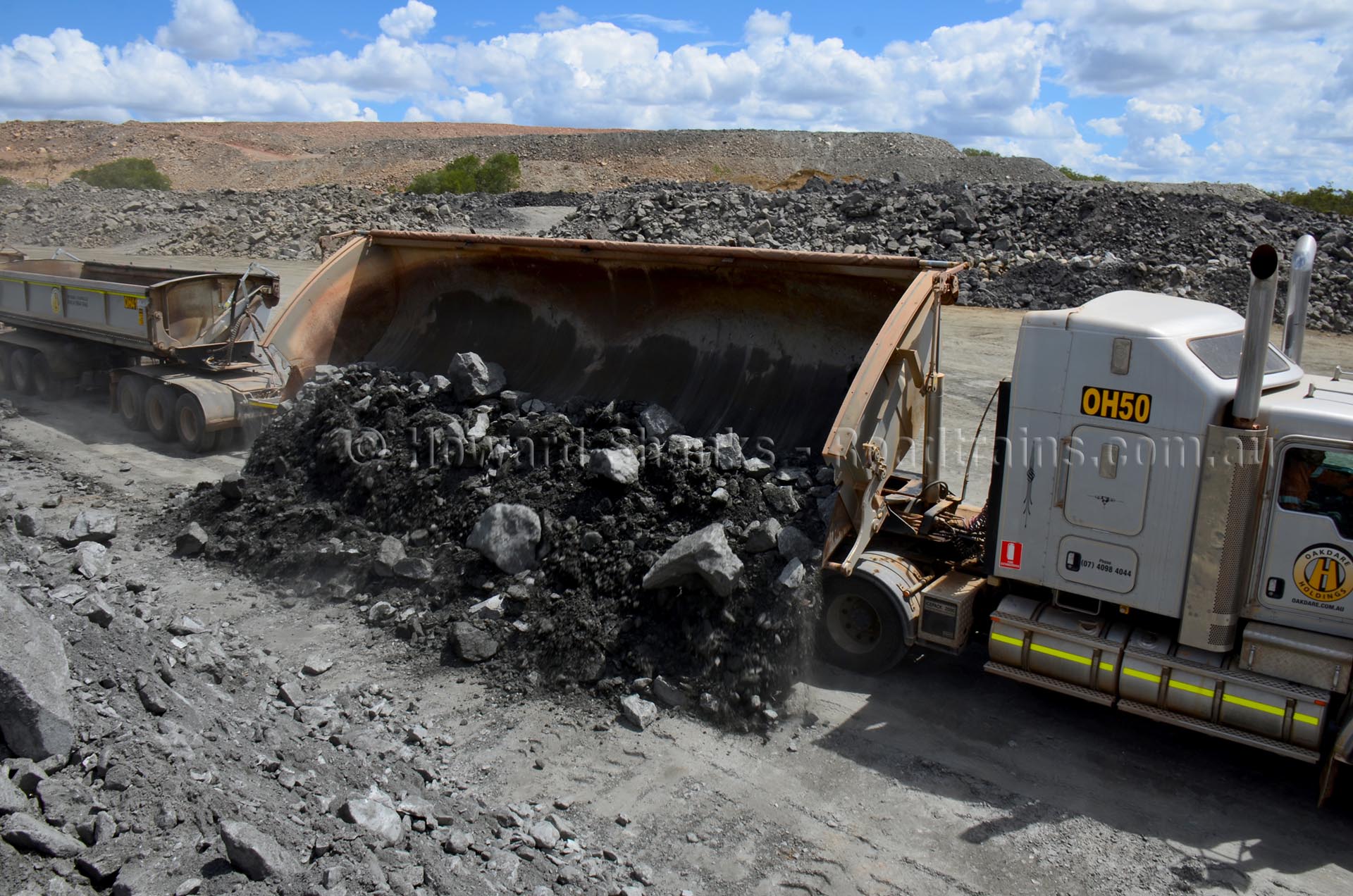 These days, every combination in the fleet is either B-Double, roadtrain double, triple or quad, like the units operating on the Mt Garnet contract.

“From a business point of view it just makes sense to have Kenworths, their overall cost of life is by far cheaper than any other marquee and that is made up of their ‘up-time’ through reliability and the back up service we get from Len Roberts, Tony Burton and the team at Brown and Hurley in Townsville,” Michael continued. “And the same goes for Mal Peppin from Lusty EMS who looks after us from the trailer side of things.”


“We have more or less standardised on Kenworth’s T650 and now the T659 for the roadtrain side of our operation simply because they are such a reliable tough truck. We do a lot of work up in the top of the Gulf and Cape York and you really need rugged equipment to operate up there. The conditions are extremely severe,” Michael added.

Cummins have been the preferred power plant of choice in the Oakdare fleet and that goes way back to the days when you had a choice of three engines in a Kenworth. Again, however, Michael refers to the people factor as the critical contributor in the long-term relationship with Cummins. “We’ve had a good run out of Cummins engines over the years and their service and parts availability up here is the remote area is first class,” Michael said. “Cummins engines are a lot like Holden cars up here, you can always find someone who has a part that can get you out of trouble,” he added. 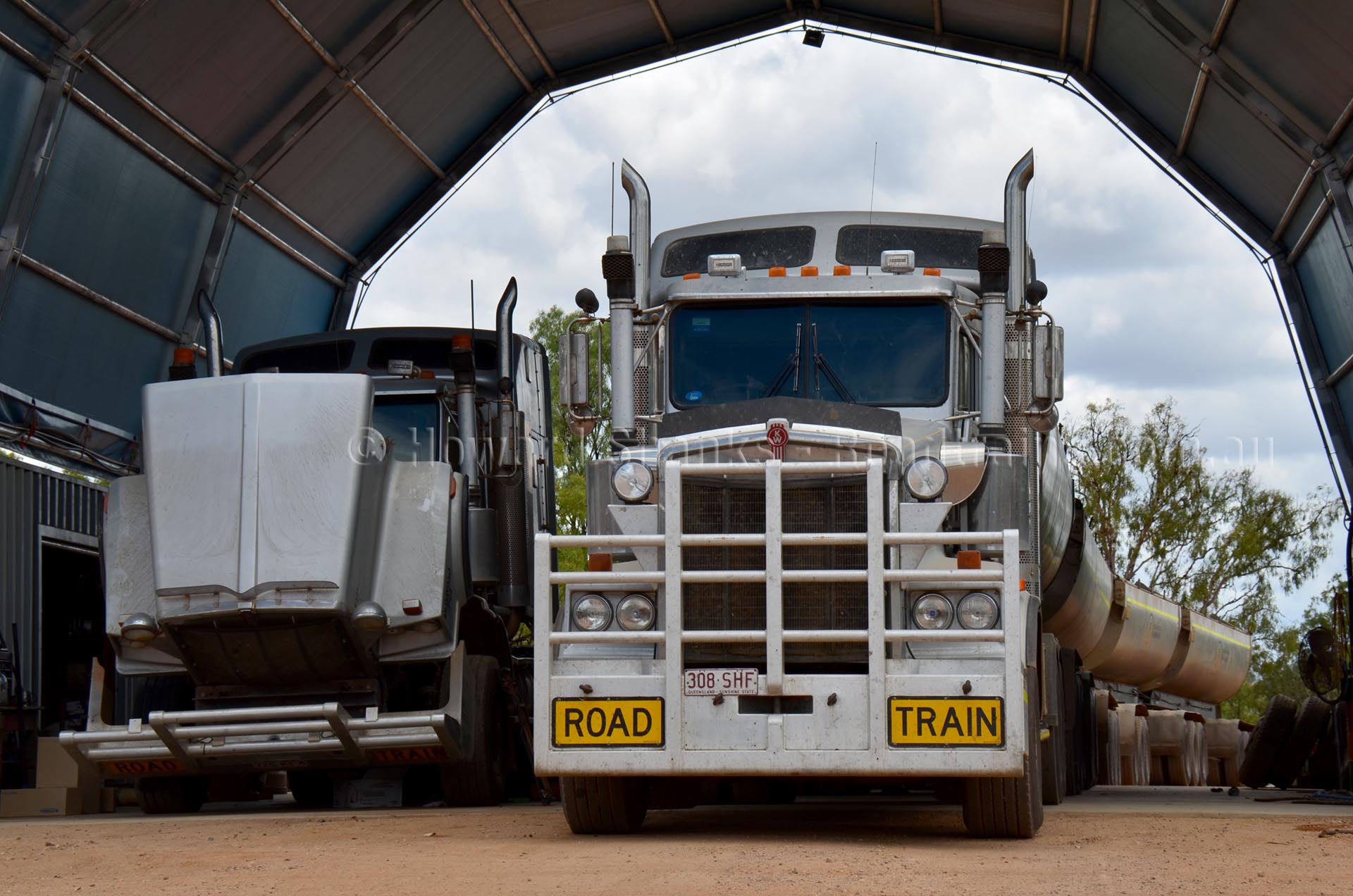 The 600 HP Cummins e5 engines that produce 2050 lbft of torque powers their latest T659 Kenworths, which is coupled to an Eaton RTLO22918B transmission with Dana D52-190 rear axles all riding on Kenworth 6-Rod suspension. These heavy duty Kenworth’s are built tough for these harsh conditions and come standard with two CR Turbo 2000 air dryers with heaters and a Cummins 37.4 CFM twin cylinder compressor.

Up front is the renowned heavy duty King built “

” bullbar, which has the addition of the optional fifth middle post for extra strength. “They’re great bullbars,” Michael revealed. As you can imagine we get a lot of animal strikes up here and they have saved us countless times.”

Much like the Kenworth T659 these trailers are very versatile. They boast an extremely light tare weight, from 6.4 tonnes and can carry materials from fine concentrates to 1-meter blast rock.

“We have 65 Azmeb door side tippers and 40 Azmeb dollies,” Michael explained.

The backbone of the trailer is the deep-dished cradle type-high tensile steel (800MPa) chassis producing a very light tipper chassis with a low centre of gravity.  The cradled bowl shaped body is made of Hardox 450 grade abrasion resistant high tensile steel that is free of body runners, stiffeners and cross members giving the body a very light tare weight.

Tipping is via two only, 6-inch (150mm) double acting hydraulic cylinders with door opening via linkages, which gives the fastest tip cycle of any tipper. The door is over-centre locked when in the closed/travelling position.  Doors are manufactured from Hardox 450 Grade or 5083 H116 Aluminium dependent upon client’s tare weight and application requirements. 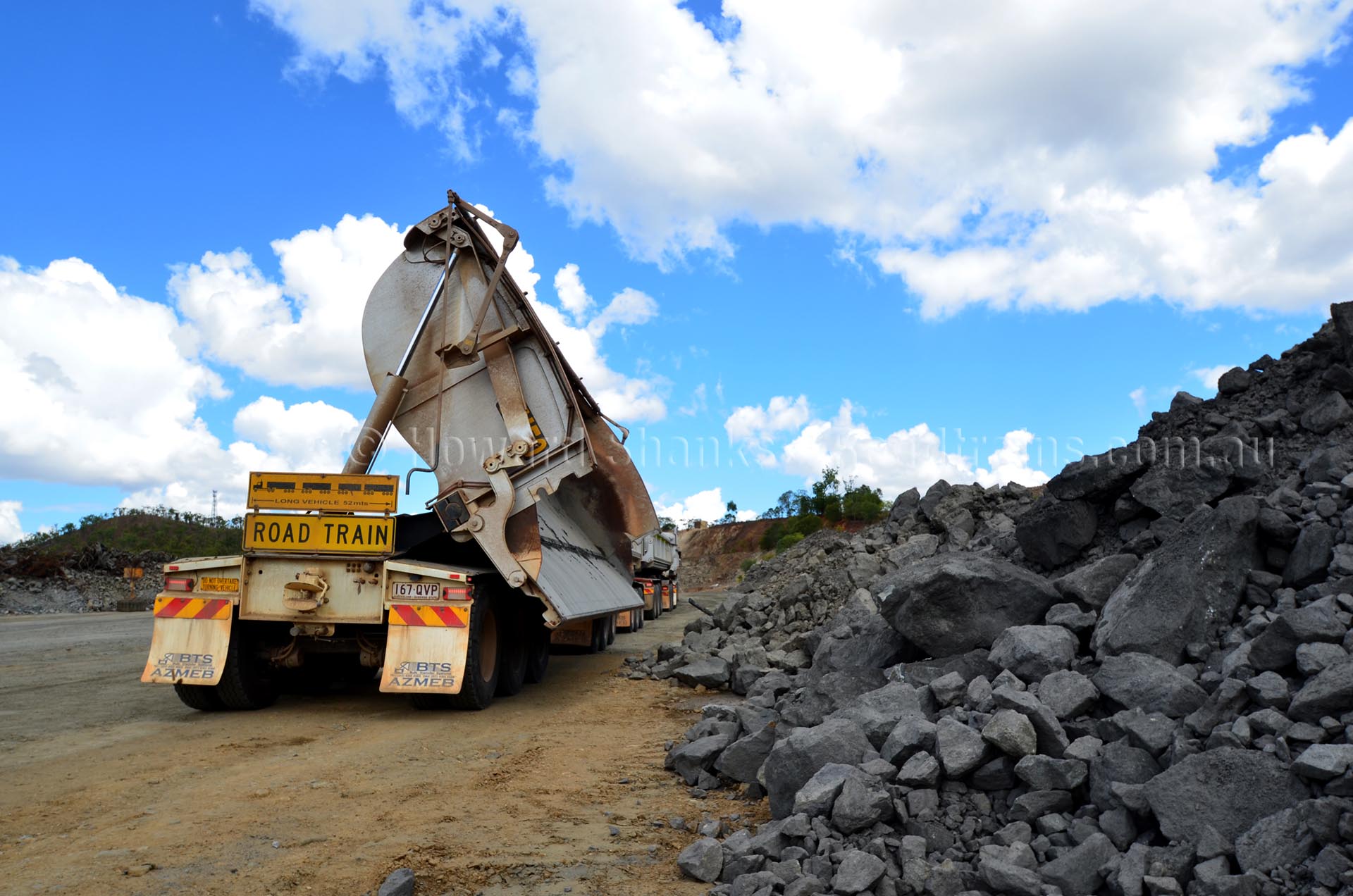 The Azmeb Door Side Tipper has a single hydraulic ram construction, which lessens the need for extra controls and hydraulic circuits, in turn reducing potential downtime.

“The single ram design means that when the trailer tips, there is only one action for tipping and door opening combined, speeding up the overall process considerably,” Michael explained. “The bowl floor design also aids this fast unloading process, as it reduces sticking and avoids product getting caught in the corners of the tub. Dependent on the hydraulic flow supplied, the whole load can be tipped in as little as 25 seconds.”

A heavy-duty rubber hinge on the door is another unique feature of the product. “The rubber hinge is tough, durable, and isn’t prone to rust,” Michael revealed. “It also saves on maintenance times as there are no grease points on the door hinge. But most importantly, with the rubber hinge they are watertight and that is critical in our operation here at Mt Garnet where we are carting hazardous ore products. We simply can’t afford any spillage what so ever.”

Meanwhile a continuous tub-to-chassis pivot bearing distributes loads evenly across the tub and chassis, resulting in low maintenance and trouble free operation.
“We exclusively use BPW axles in our trailer fleet and we have over 300 ove them,” Michael revealed. “We run the 120mm square axle and they more than stand up to the punishment they get here in north west Queensland.”

Over the last few years we’ve been specifying BPW disc brakes on our trailers and we’re nearly at 95 per cent of disc brakes through the trailer fleet,” Michael continued. “We’re finding we’re getting get service life out them both on-bitumen and off. The main reason we originally went to disc brakes was for weight saving but we’ve found that they have better dissipation of the heat, which is giving us a lot better tyre life and the braking capability of the discs is far more superior than the drums. Also without the grease points there is lot less time spent on daily servicing of the trailers and we don’t have to adjust the brakes for the life of the pads. From service life we have trailers that have worked in mixed service with both on and off highway operation that have over 300,000 kilometres and the pads are still good.”

“We specced our trailers with steel-spring suspension as they’re more reliable in the bush work we do.

Purchasing quality equipment has certainly paid off in the long term for Oakdare Holdings too as Michael explains. 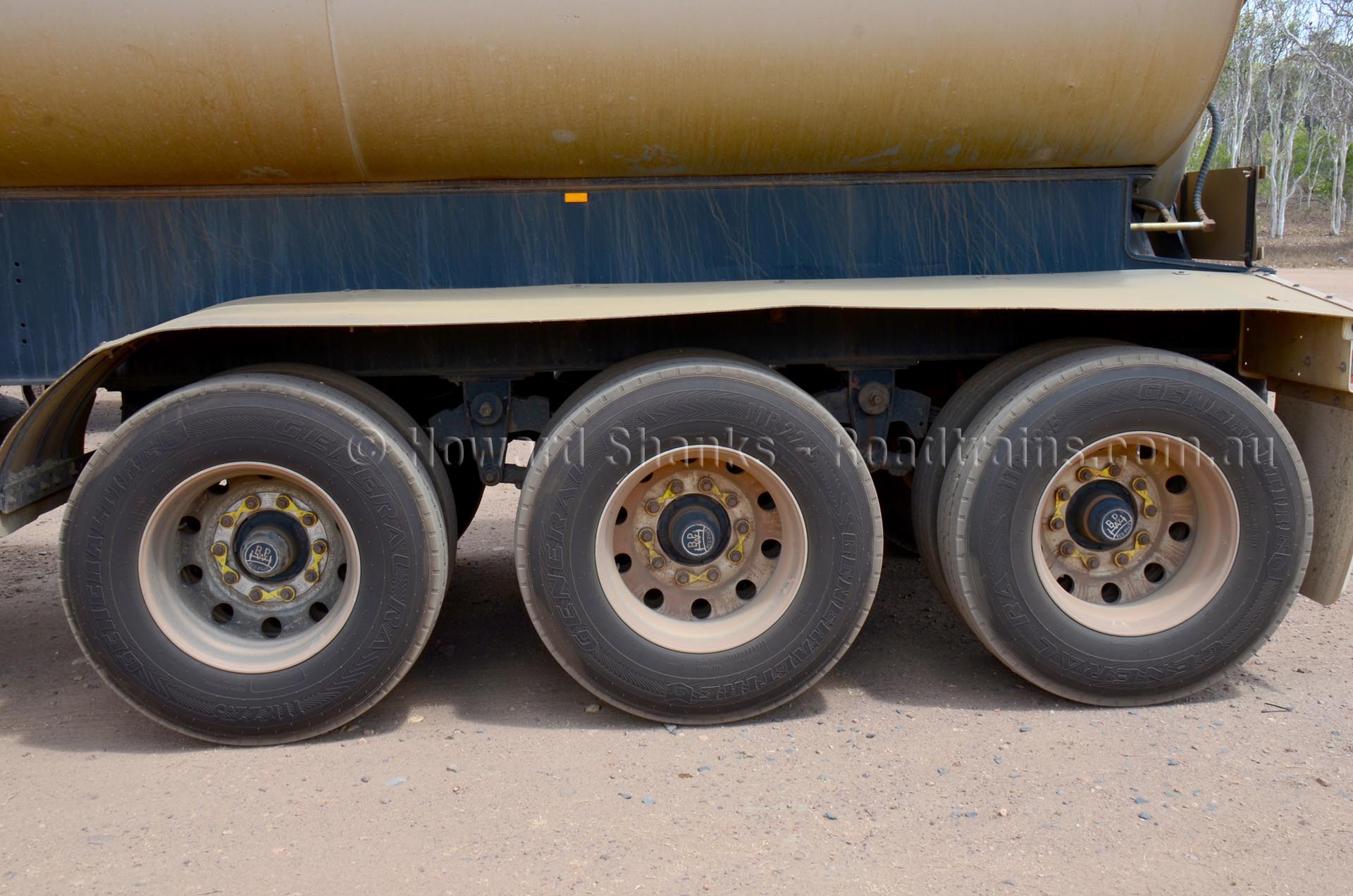 “We use to religiously turn our vehicles over around that one-million kilometer mark. However the economic down turn meant made us rethink some of our business strategies and we opted to keep the trucks we owned longer, to assist with our cash flow.

“We spent a bit of money on them around that one-million km mark to give them a freshen up and now some of those trucks and trailers have over two-million kilometers and they’re going back and forth just the same as our new ones,” Michael added.

“It is that simplicity in maintenance and the durability we get from quality equipment like the Kenworth, Azmeb trailers and BPW running gear that really drive our business forward,” Michael concluded. “And that means we have good driver acceptance because without out drivers we would be going anywhere.” 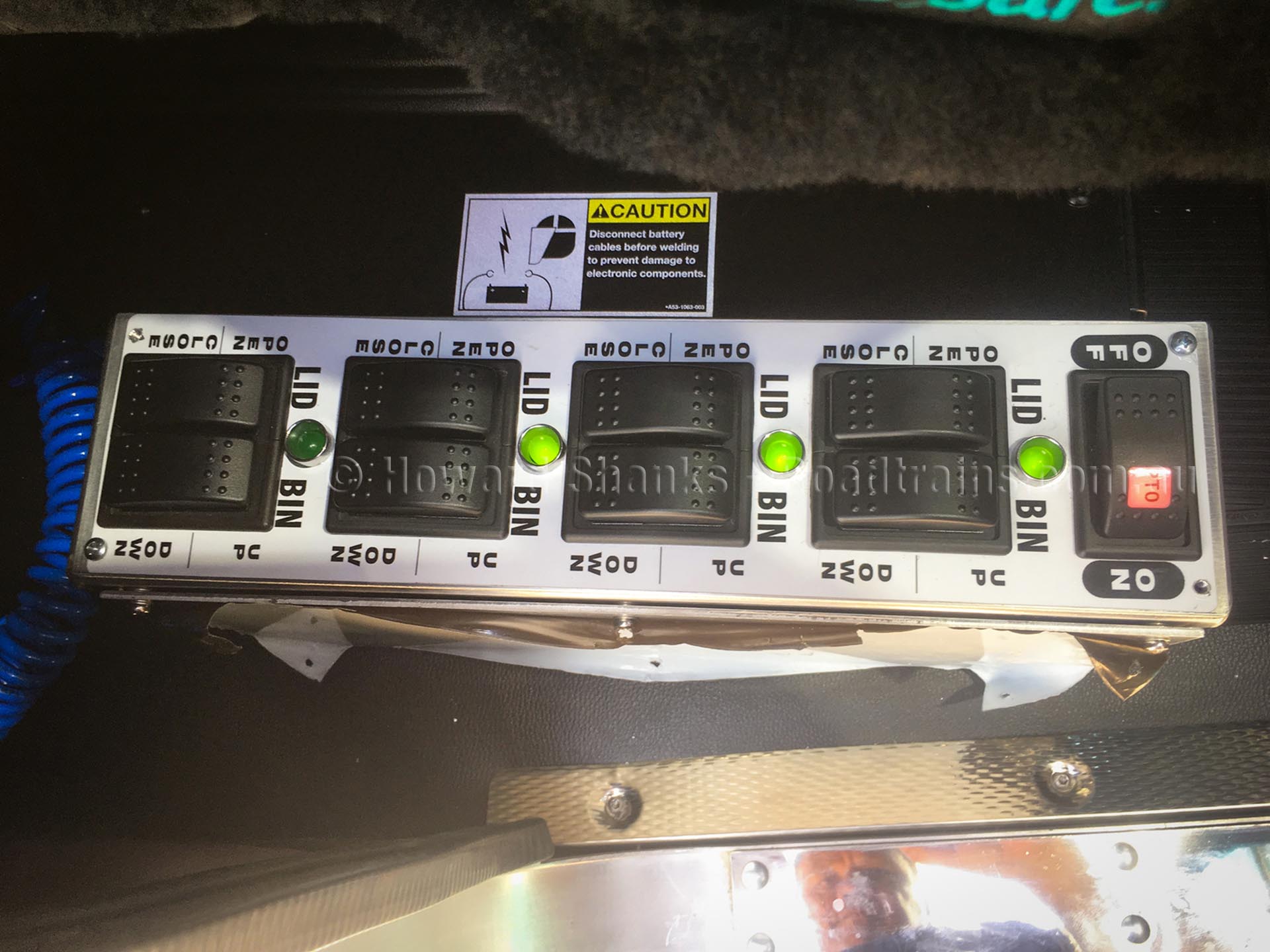