Application flexibility, economy, reliability and proven back up service from CJD Equipment are reasons why Tasmanian based Gaspac Motors owner Andrew Arnold continues to specify DAF trucks. After five months and 100,000 kilometres of faultless running, he is convinced he made the right choice! 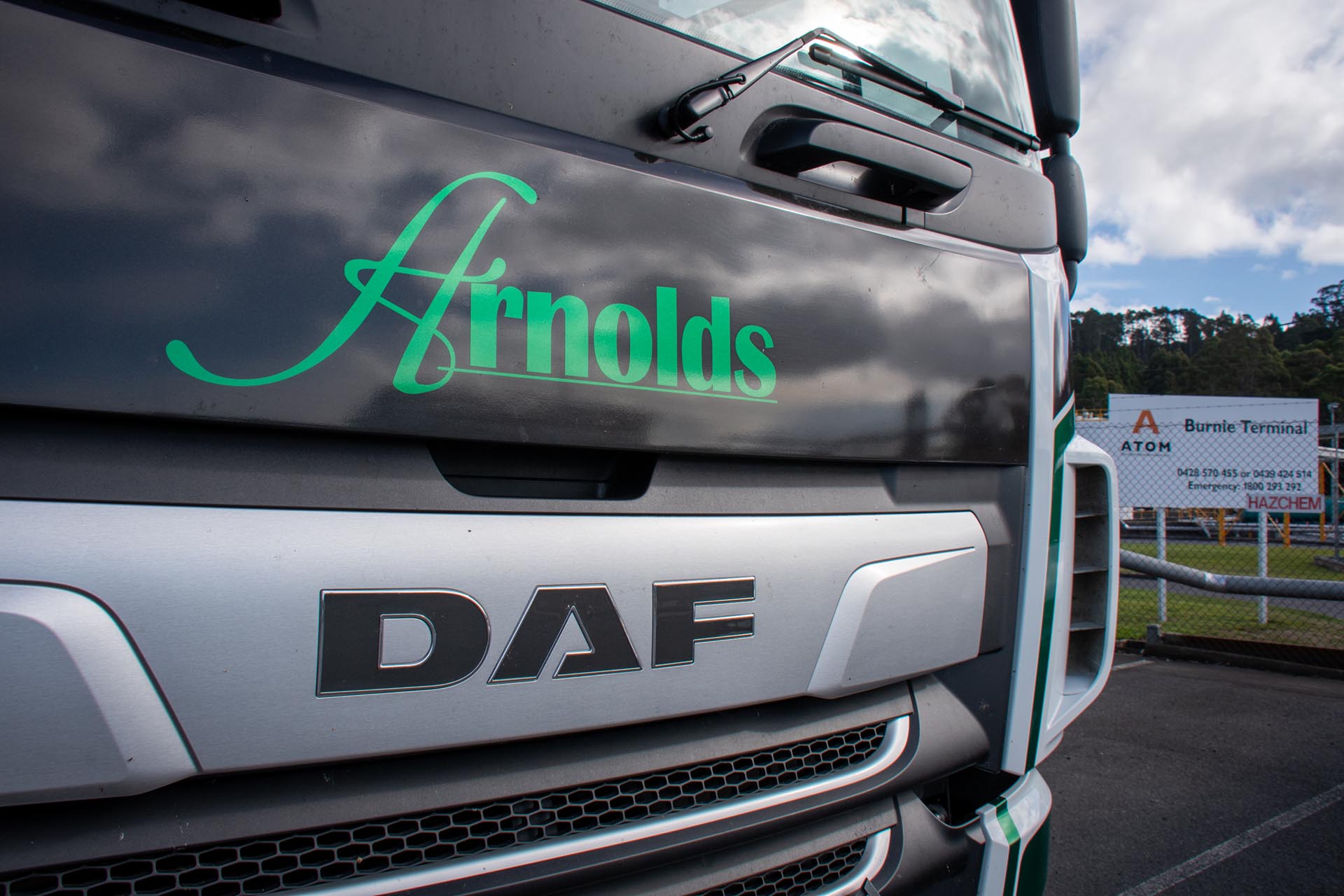 It’s a typical autumn afternoon on the Northwest coast of Tasmania, and Andrew Arnold momentarily pulled his new DAF CF-480 FTT 6×4 out of the BP terminal in Burnie. He is pulling a fully loaded tanker with a gross combination mass (GCM) of 50 tonnes. Moments later, Andrew is well into the steep climb south, out of Burnie up the dedicated truck bypass road on his way to Queenstown. Instantly, the high torque of the MX-13 engine and cleverly specified gearing combination is evident as the new DAF CF-480 marches briskly up the steep grade towards the Ridgley Highway.

Following in the footsteps of his truck driving father, Andrew took over Gaspac Motors from his father almost two decades ago, taking on dual roles of owner and driver. Based in Smithtown on the West Coast of Tasmania, the company primarily delivers fuel all over the island state. A few years back, the majority of their fuel deliveries went to local farmers in the region. However, today, demand for their reliable service has increased and now includes deliveries to service stations along with their farm supplies.

A decade or so back, when Andrew specified his first DAF truck, it was a decision, he recalled he deliberated on for a considerable time. He was persistent that any future vehicle acquisitions would need to transport his business to the next level.

“I certainly had several boxes that I wanted ticking before making my final decision,” Andrew reveals. “At the same time, I was keen to support an Australian manufacturer with strong dealership support in Tasmania, and thankfully I found that with PACCAR and CJD Equipment.”

“The fact that CJD Equipment opened a dealership with a full workshop and parts availability here in Burnie a little over 12-months ago certainly demonstrates their customer commitment to us,” Andrew says. 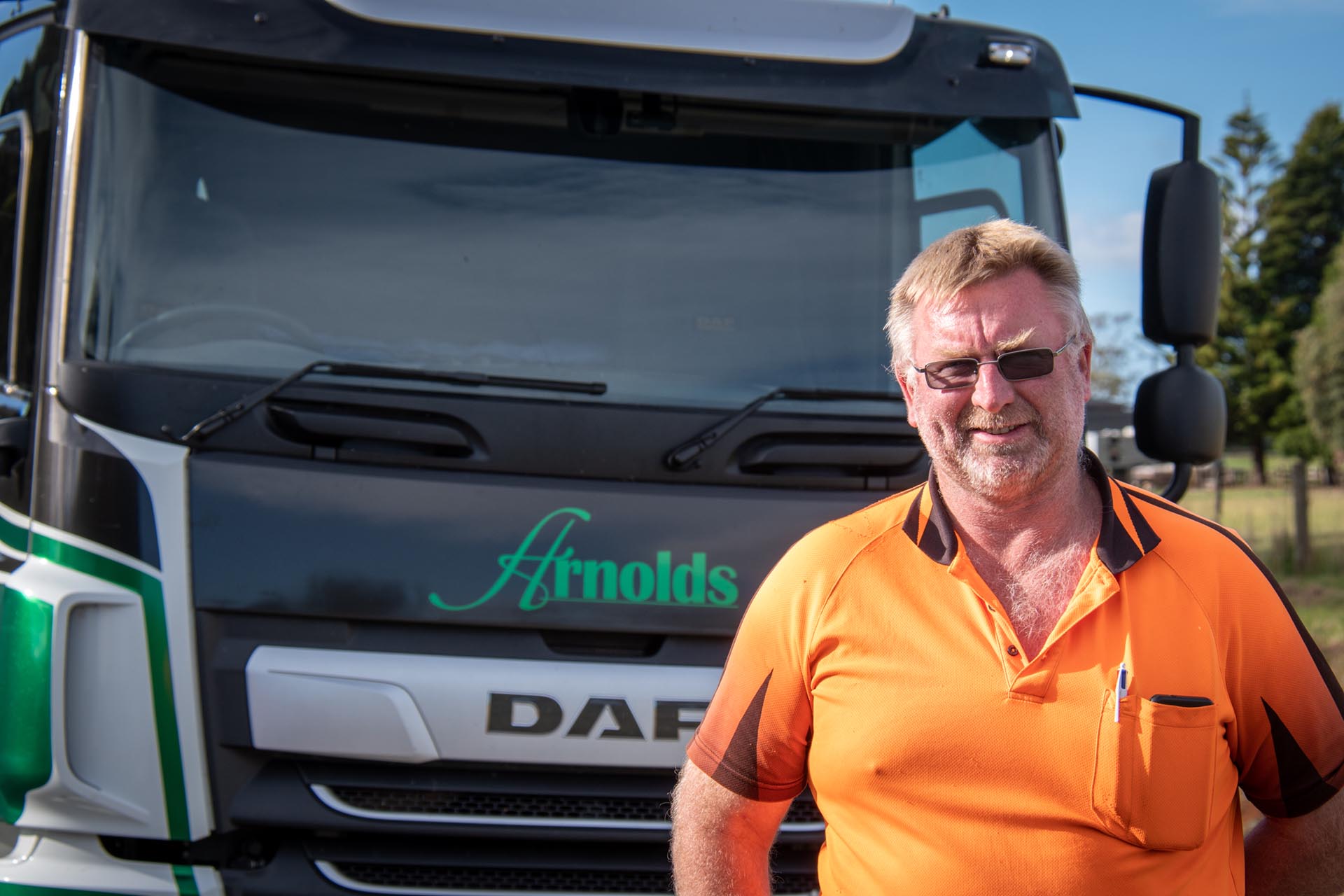 Andrew Arnold is impressed with the new Euro-6 DAF

“We are extremely mindful of the environment we work in,” Andrew continues. Our trucks need to be quiet in operation because we often work near residential areas of towns after hours. Creating and maintaining good public perception is a high priority not just for our business and our customers, but for the transport industry in general.”

“We finally settled on a DAF CF85 460, with the 12-speed transmission,” Andrew remembers. “At the time, we were more than happy with its performance and exceptionally pleased with the fuel economy of it. That truck averaged 2.4km/litre on stop-start farm work and 2.5-2.6km/litre on highway work. The results were better than we expected, especially when you take into consideration the PTO pumping time for farm deliveries.”

“The manoeuvrability of our original CF85 around the farm was excellent,” Andrew reveals. “They have great vision, which is such an asset for farm work where you need to have your wits about you because you’re constantly on the lookout for gate posts or tractor implements left in laneways.

“The visibility out of the new DAF CF-480 is equally as good, if not better.” 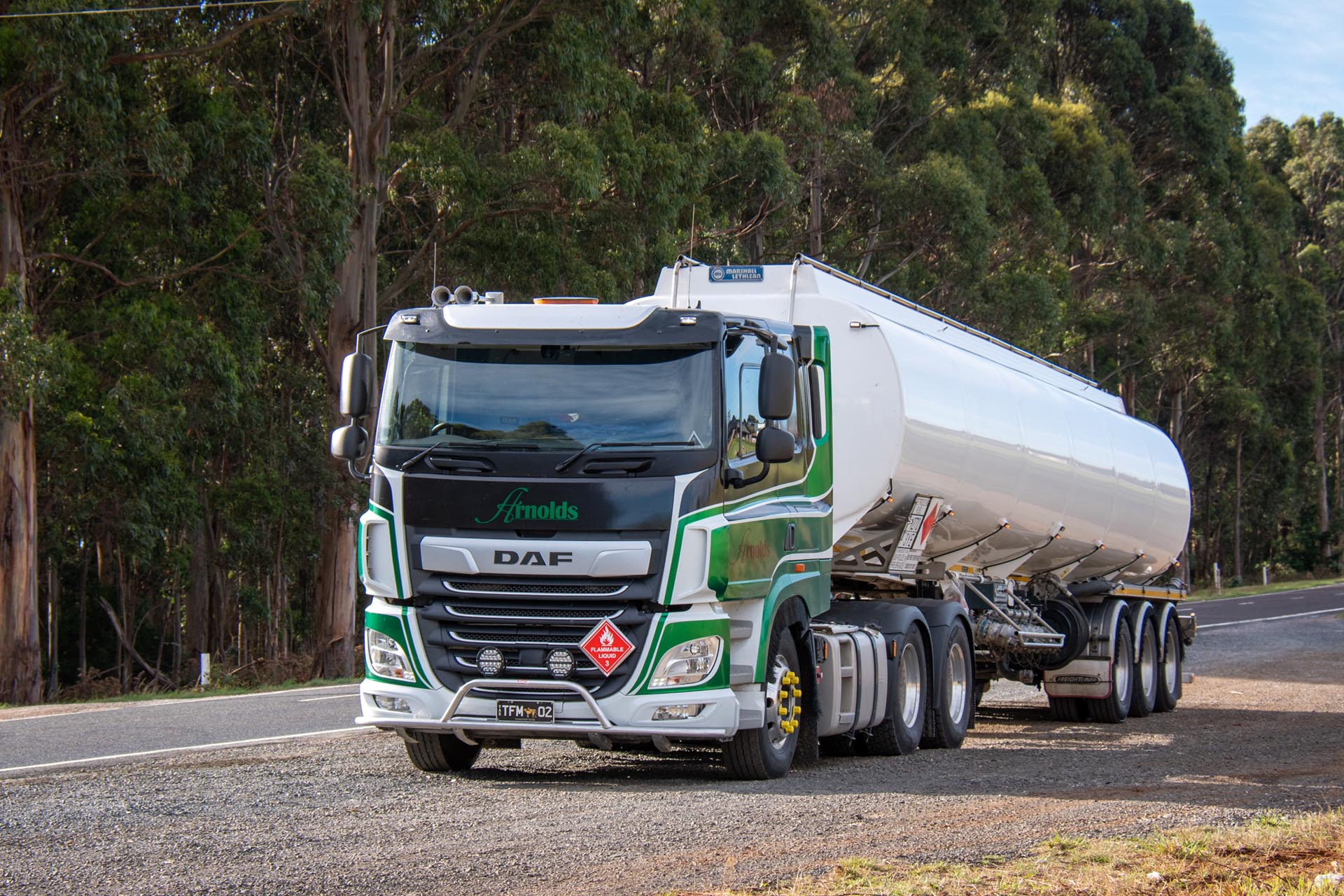 “The fit and finish inside this new DAF is first-rate,” Andrew adds. “The dash fascia and lavish upholstery make the cabin resemble a luxury car rather than a working truck. One thing I really like about the DAF CF model is the three-step entry. In our line of work where we can have up to 30 or 40 deliveries in a day, the ease of the two-step entry is certainly an advantage for us.”

However, it was the economy, reliability and performance of the old CF85 that paved the way for this new Euro-6 DAF CF-480, which joins two other DAF CF85s in the Gaspac Motors fleet.

Arnold’s CF-480 delivers maximum power at 1,600rpm, with a maximum torque output of 2,350 Nm (1733lb-ft) available from as low as 900RPM through to 1410RPM. To maximise the advantage of the MX-13 engine’s broad torque output, this DAF comes equipped with a 12-speed ZF Traxon automated transmission.

On paper, the CF-480 MX-13 engine torque almost matches that of larger 15-litre engines. Out there in the field, the MX-13 and 12-speed Traxon transmission indeed prove it has the tenacity to mix it with the big boys. 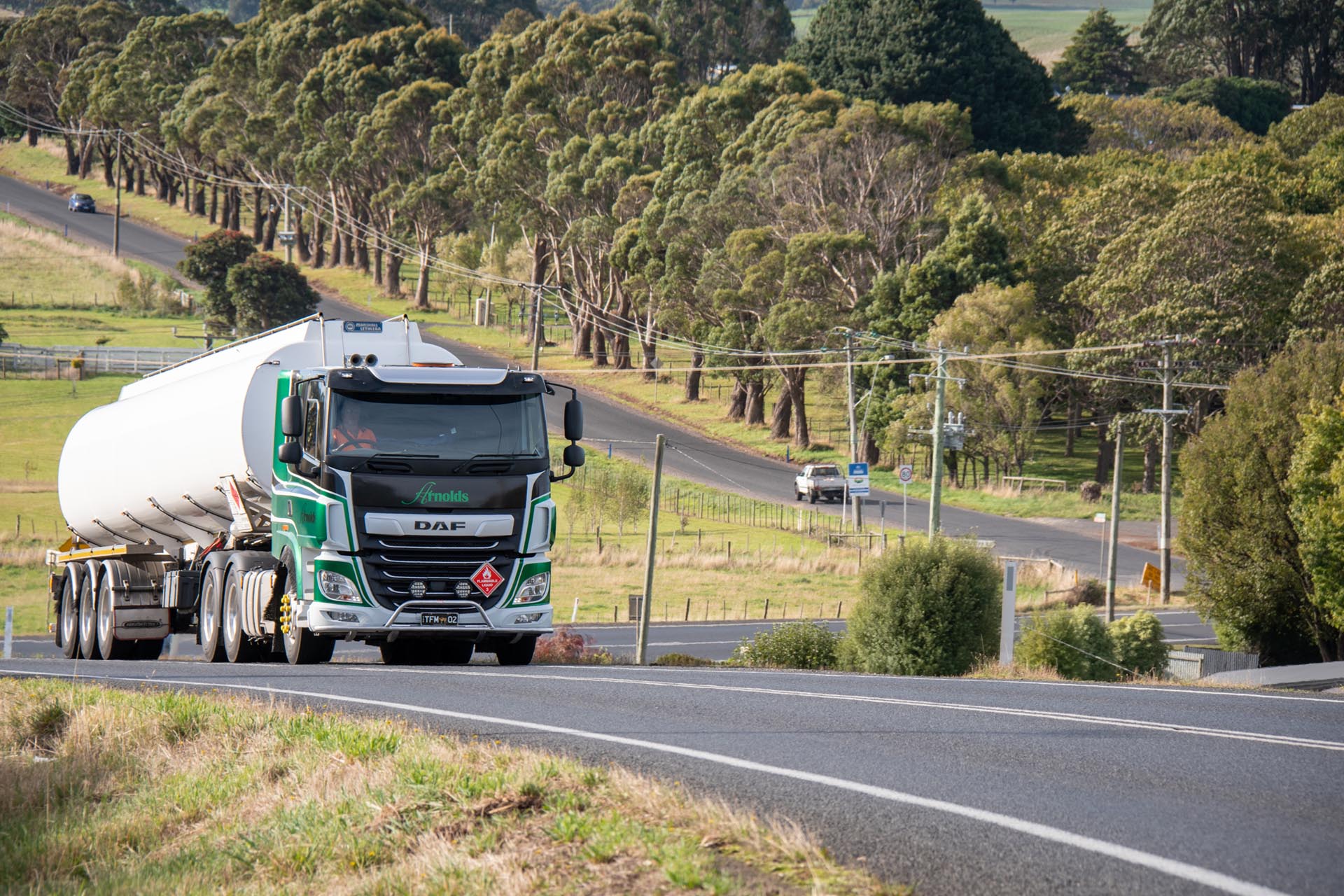 Andrew adds that on the downhill section, the engine braking is very effective. The DAF descends mountain ranges with minimal use of the service brakes. 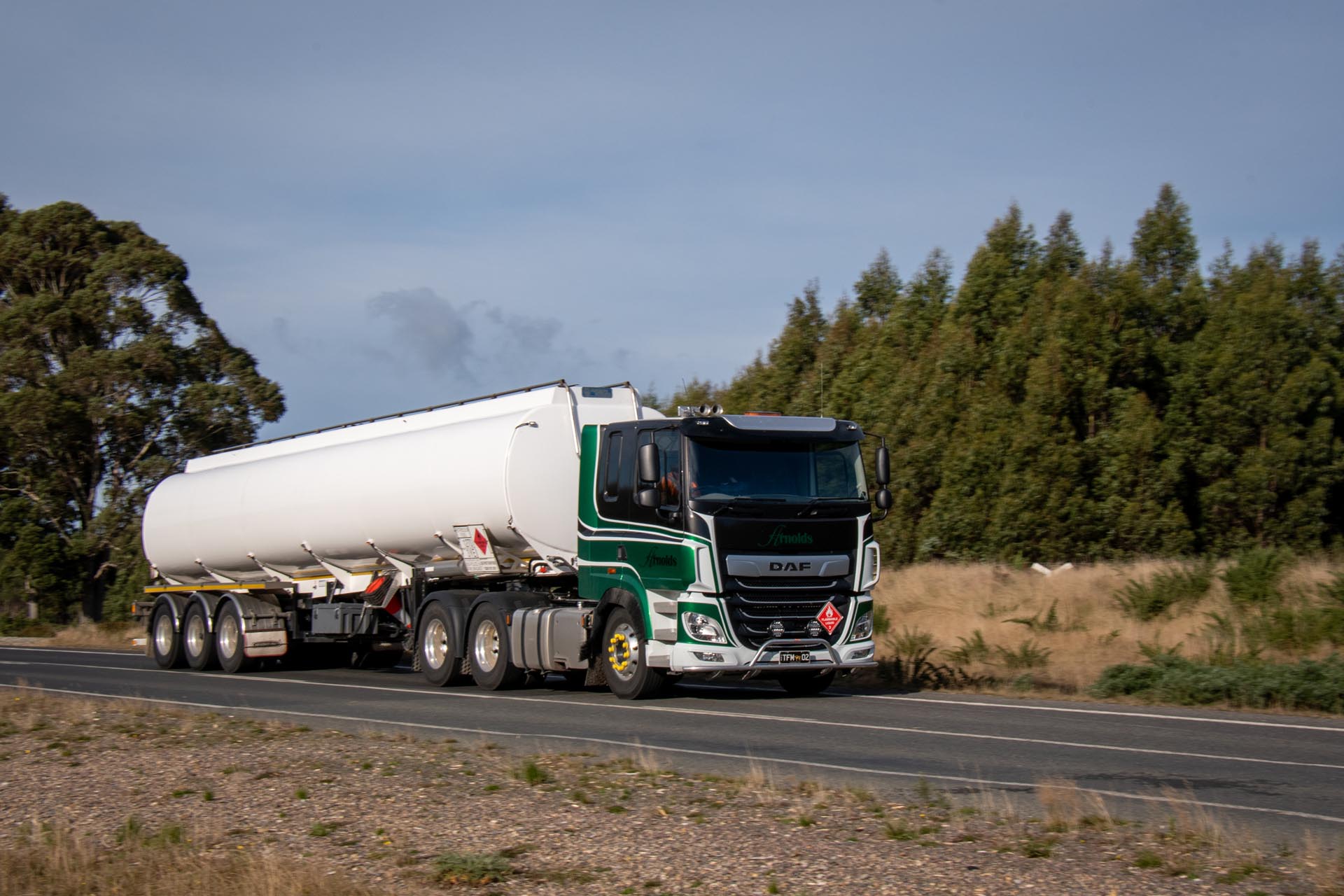 “I particularly like the 12-speed transmission,” Andrew explains. “The ratios in that transmission are better suited to our hilly environment here in Tasmania. Furthermore, the ratios of each gear certainly maximise the high torque of the PACCAR MX-13 engine.”

Peak torque of the MX-13 480HP (355kW) engine begins at 900RPM and continues through to 1400RPM. The advanced multi-torque feature adds an additional 100-150 Nm of torque when the transmission is in top gear.

“Roads in Tasmania, even more so on the West Coast, are often uphill”, Andrew continues. “The torque and gearing of our new DAF certainly help turn those mountains into far flatter ground. Which consequently improves our average trip times even on the steepest routes.”

“All our DAF trucks are very fuel-efficient,” Andrew says. “because these engines produce such high torque at low engine revs, it means we are using less fuel, and there is less engine wear. This new CF-480 is even more fuel efficient. We’re consistently nudging the three kilometres per litre on highway runs to Hobart. On runs into Queenstown like this one today, we are averaging up to 2.8km/l, which is an exceptional result given the mountainous roads on these routes.” 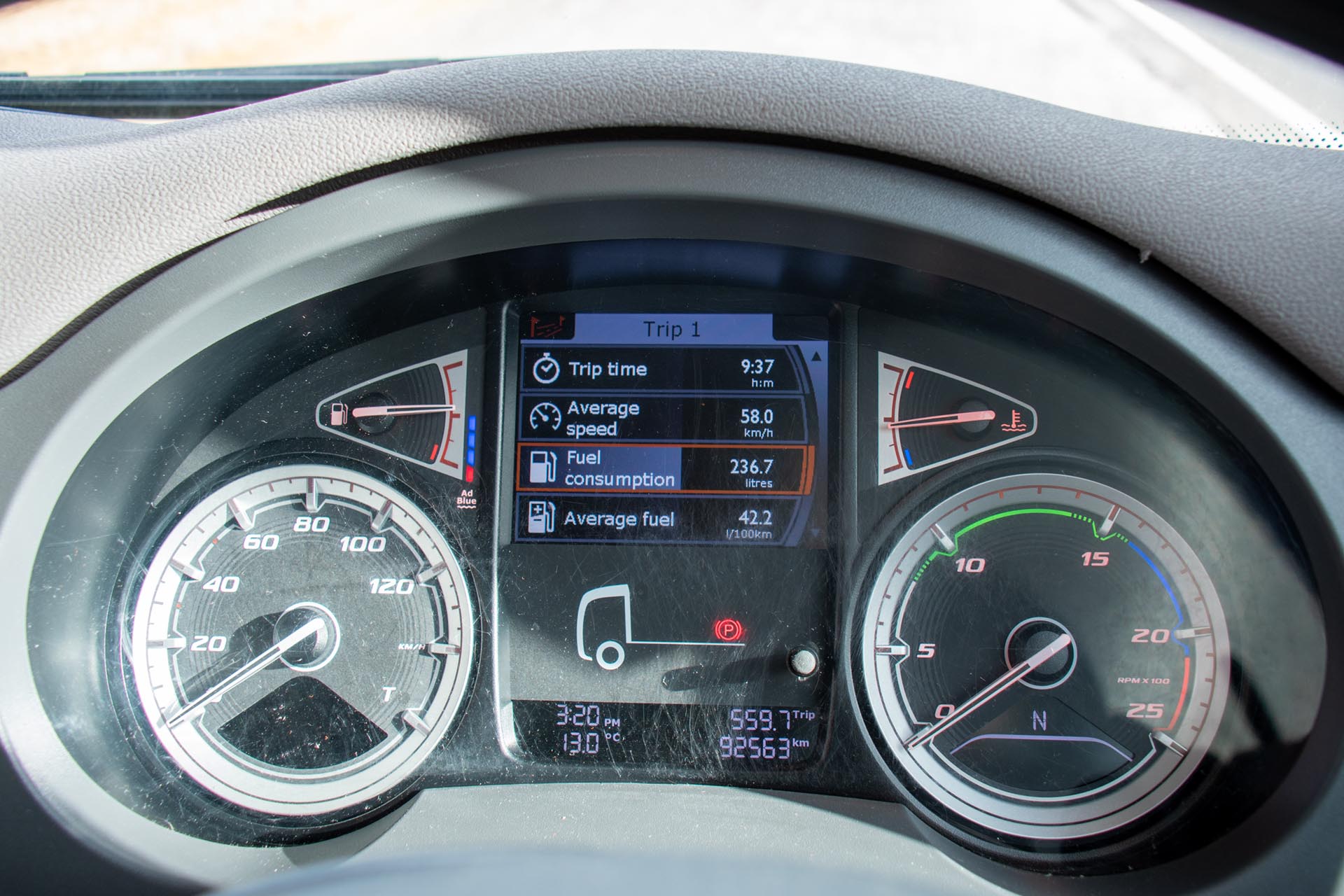 Fuel economy display’s on the dash

“The new generation DAF trucks are superior vehicles with cutting edge technology on board that includes enhanced safety features. In the fuel haulage business, safety is paramount. I have several young drivers working for us, and their safety is paramount. The training of our young drivers is something that I continue to do myself in-house, and CJD Equipment supply us with up-to-date training assets.”

Andrew is adamant that his investment in DAF trucks is worth every penny. “To anyone who tells me that the DAF trucks are too expensive, I answer that it is an investment that pays interest. And you don’t see that too often these days,” he adds. “DAF is a guarantee,” he says. “I find it hard to remember ever having a problem on the road. Our first CF85, which we traded a few years back, did over one million kilometres with us, and we only ever replaced a fan belt. I believe that truck is still operating with someone else today.”

“I certainly love the look of this new DAF,” Andrew says. “The fact that it is only five months old and already covered 100,000 kilometres without so much as a hiccup, is certainly pleasing and reiterates we made the right choice to go with another DAF truck.

However, when it comes down to the business side of the job, I leave my emotions out of the decision process and focus on the productivity gains when it comes to specifying our trucks,” Andrew concludes. “The fact that the DAF CF480 turned out to be the ideal model for our application along with the quality back up service we get from CJD Equipment is just a bonus and keeps us ahead of the game.” 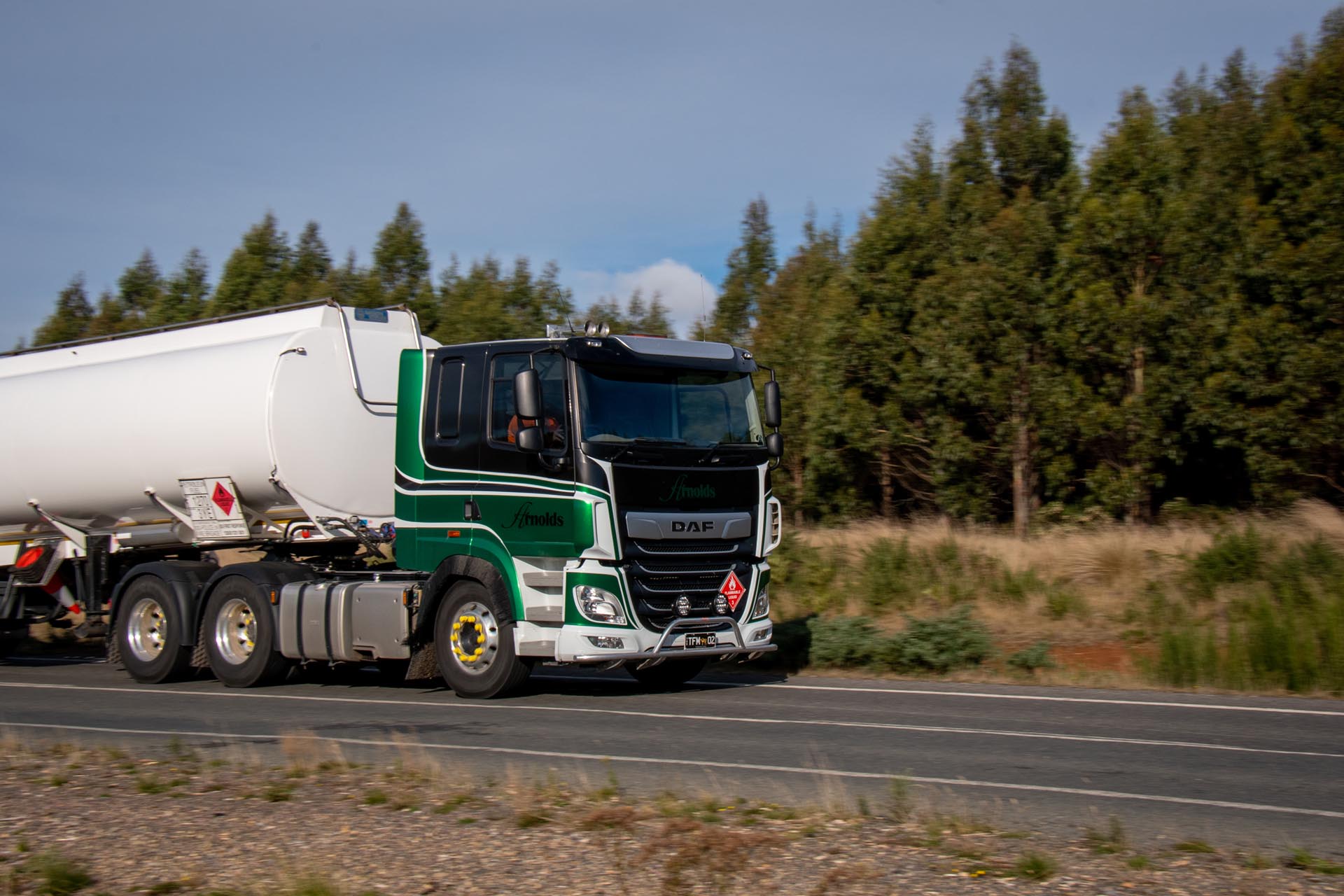