When you’re regular daily route tackles the steep remote west coast of Tasmania, there are a couple of things you need in a truck; plenty of power, with good reliability along with sound back up service and that’s what Arnold’s Transport from Smithton are getting from their new DAF CF85 510 as Howard Shanks discovered. 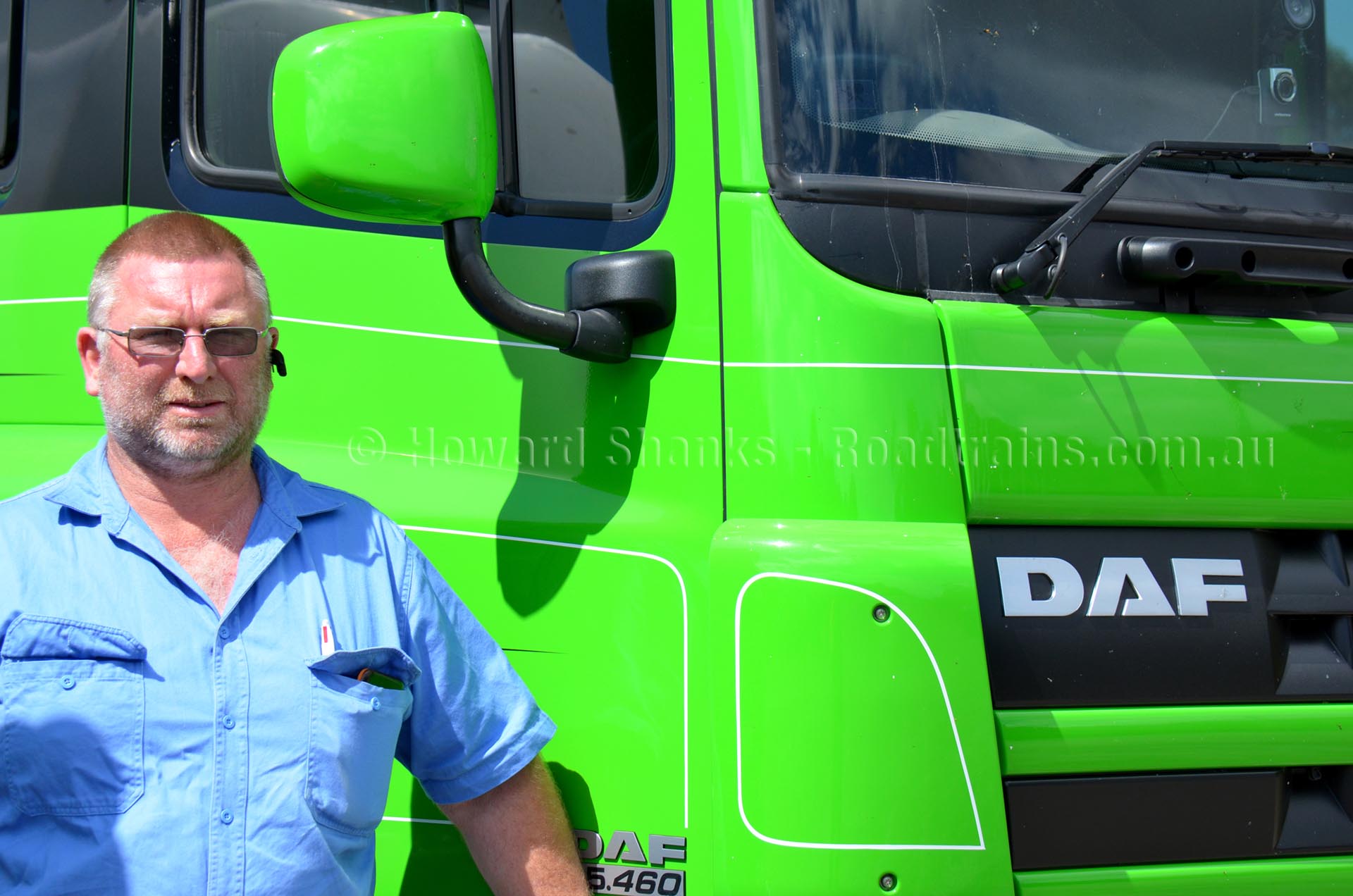 Smithton is the commercial center for the thriving agricultural industry of the North West Coast region as well as the beginning of the spectacular Tarkine Wilderness. The surrounding area boasts lush rich green fields fed by rains from the roaring forties.

Owner of Arnold’s Transport, Andrew Arnold, says Smithton and the surrounding communities are very prosperous with diverse industries from agriculture through to forestry. Consequently demand on fuel usage is high in the area, which keeps the Arnold’s tankers busy, and subsequently place huge demands on truck reliability and back up service.

The reason to specify DAF trucks into his fleet a few years back was a decision that Andrew said he deliberated on for sometime with careful consideration placed on a number of key aspects.

“The trucks that would take us forward needed to tick a number of boxes for us,” Andrew explained. “Firstly I wanted to support an Australian manufacturer with strong local Tasmanian dealership support and we found that with PACCAR and CJD Equipment.”

“Flexibility to operate in tight farm environments with the capability to comfortably run to the other end of the state when required was an aspect we’d hope to achieve, basically be good in off-highway situations with economical on-highway characteristics.

“We are also very mindful of the environment we work in and wanted a truck that was quiet in operation as we are often required to work within towns after hours,” Andrew continued. “Creating and maintaining good public perception is very important not just for our business but for the transport industry in general.

“Another important aspect is safety,” Andrew added. “I have two young drivers working for our company and their safety is paramount. The DAF CF 85 certainly ticked this box.” 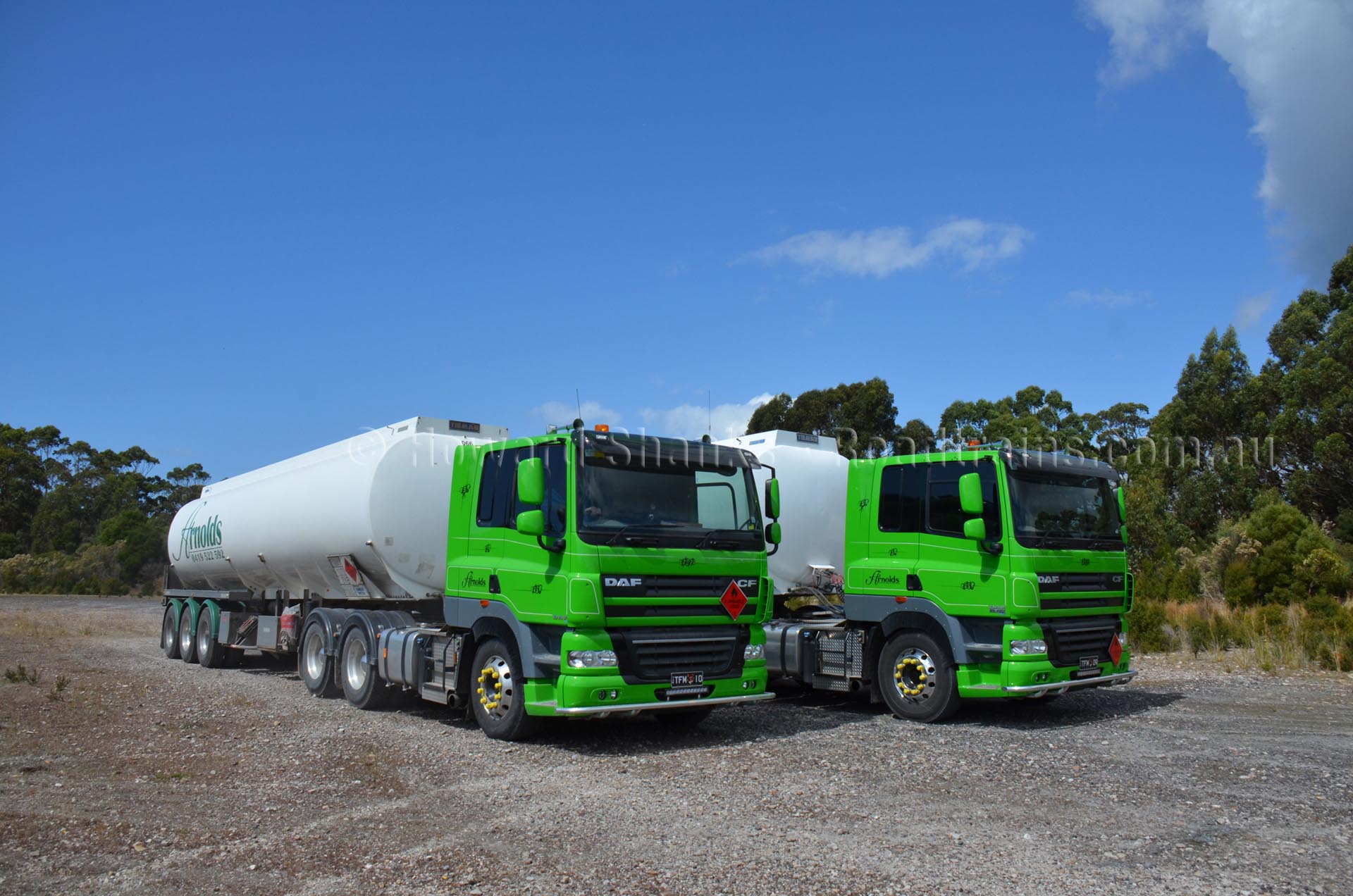 “Finally the truck needed to be reliable with good economy,”

“We settled on a DAF CF85 460, with the 12-speed transmission,” Andrew said. “We’ve been more than happy with its performance and extremely pleased with the fuel economy of it. “We average 2.4km/litre on stop-start farm work and 2.5-2.6km/litre on highway work. These results were better than we expected especially when you take into consideration the PTO pumping time for farm deliveries.

Fuel economy is exceptional with the DAF

“The maneuverability of the CF85 around the farm is especially good,” Andrew revealed. “They have great vision which is such an assets for farm work where you need to have your wits about you’re constantly on the look out for gate posts and tractor implements that are left in laneways. The visibility out of the DAF CF85 is very good for this type of work.

“I particularly like the MX engine for its low down torque and quietness,” Andrew revealed. “A lot of our work is running outside of top gear where we utilize the lower ratios in the ZF box. There’s lots of short little bursts and it’s a nice smooth engine that delivers really good fuel economy. It’s a very quiet engine too; even with the engine retarder engaged it’s especially quiet which means we can operate it in towns without disturbing the community.”

Andrew said that when he was offered an evaluation CF85 with the MX engine set at 510 horsepower he was confident that the additional power would be an asset to their operation.

“Our first CF85 460 is a very well balanced truck and has been doing a great job for us in the two years we’ve had it,” Andrew said. “I’d heard good reports of the 510 horsepower engine in the larger DAF XF105 and Kenworth T409SAR which instilled confidence in the decision to take up the offer.”

Arnold’s CF85 510 delivers maximum power between 1,500rpm and 1,900rpm, with top torque output of 2,500 Nm available from as low as 1,000rpm through to 1410rpm. To maximise the advantage of the additional 50hp, the CF85 510 is equipped with a 16-speed ZF ASTronic Automated Manual Transmission (AMT) instead of the 12-speed that is standard for the 460HP engine version. 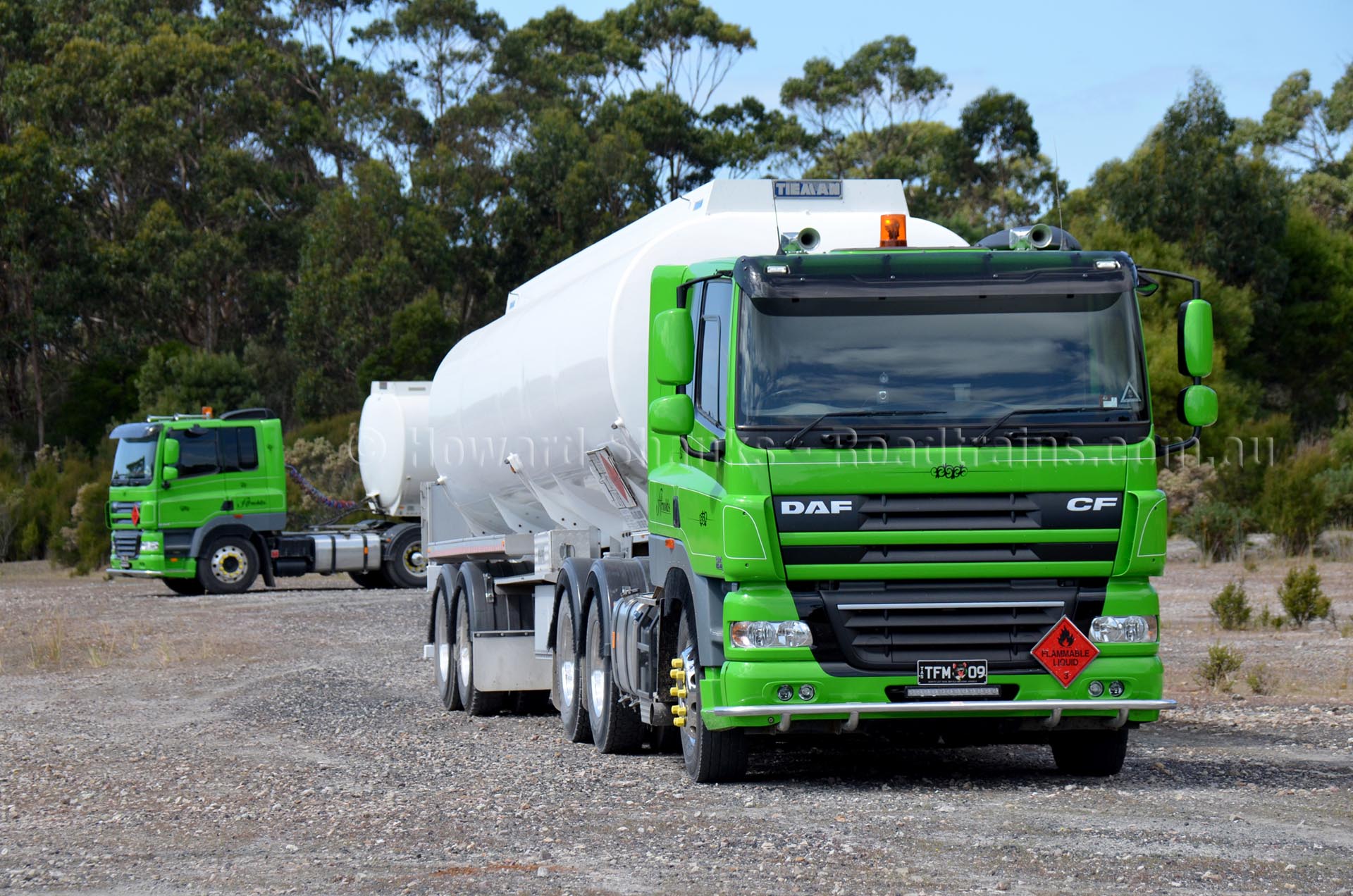 Andrew agrees that any fine-tuning of the integration of the mature driveline and braking technologies to suit Australian conditions in the CF85 510 have long been sorted out in the other PACCAR trucks with the same specification. Consequently Andrew was confident the 510hp version of the CF85 would work seamlessly right from the get-go.

How to Lift a DAF CF cabin

How to bleed a DAF fuel system

PACCAR claim that they’re hoping to position the CF85 510 as a contender for the B-Double market due to the 500+hp rating and the extra gear ratios.

In terms of safety, the CF85 510 is right at the cutting edge. Brakes are disc on the front and drums on the rear with EBS (Electronic Braking System incorporating ABS), exhaust brake (retardation power 320kW at 2100 rpm), ASR (Anti Slip Control) and Hill Start Aid with AS-Tronic transmissions only.

Depending on the application operators can chose to incorporate the optional safety package that includes Adaptive Cruise Control (ACC) with forward collision warning, lane departure warning and vehicle stability control and you’ve got state-of-the-art safety right at your fingertips. 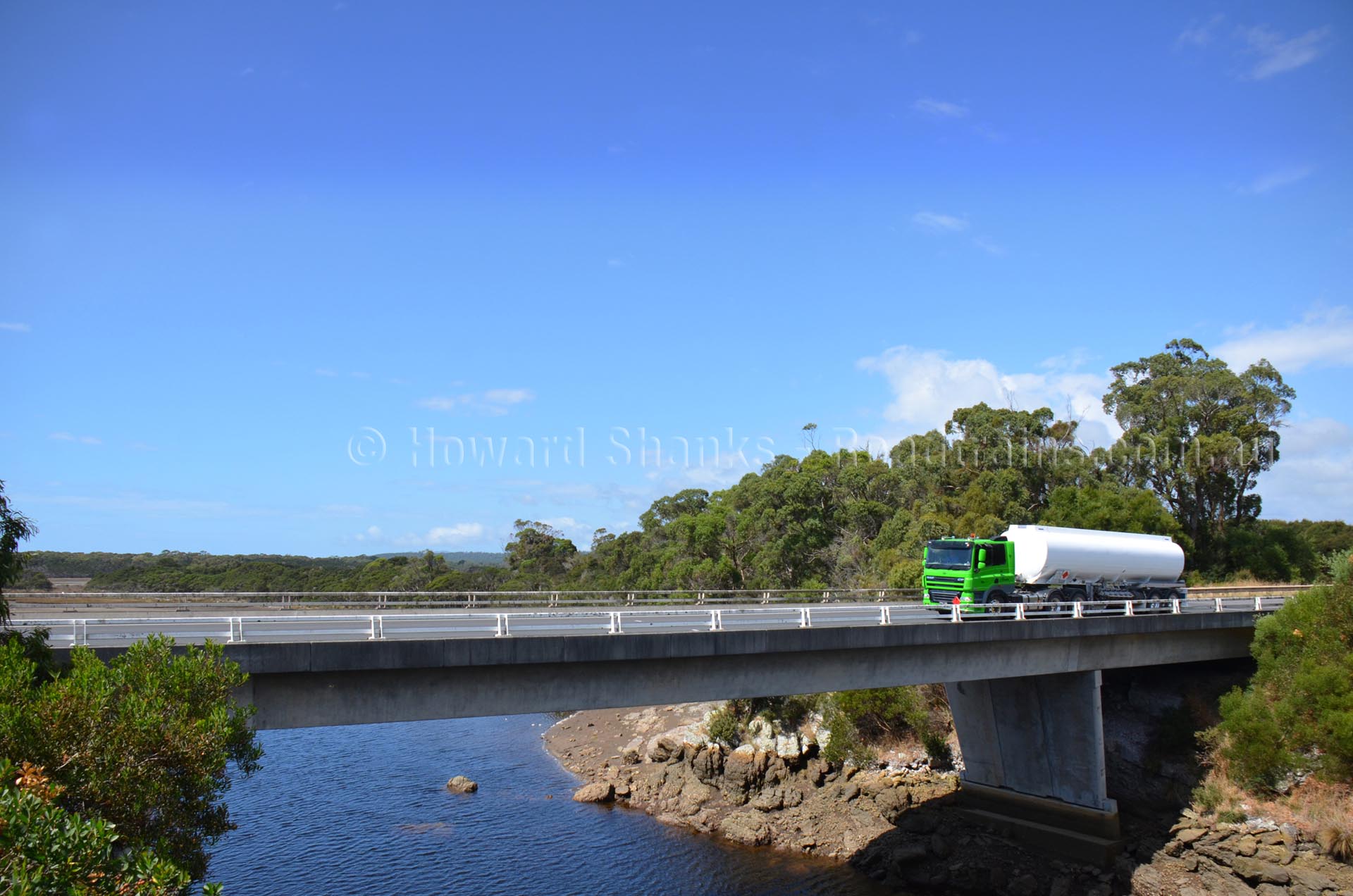 Andrew said that the cabin of the CF85 is very comfortable with a neat cockpit-style wrap-around dash that puts all the control within easy reach of the driver.

“The fit and finish inside is superb,” Andrew adds. “The walnut dash fascia and lavish upholstery make the cabin more like a luxury car rather than a truck. One thing I really like about the CF85 is the two step entry, In our line of work where we can have up to 30 or 40 deliveries in a day the ease of the two-step entry really is an advantage for us.”

The biggest surprise Andrew revealed was the fuel economy of the new CF85 510 is even more economical than their older 460 variant.

“From the driver’s seat the two trucks are identical when you look at the dash, all the switches are in the same place and the driving position is the same. However there are subtle differences in driving the two trucks, and the difference in gearing shows up in certain spots.”

I’m more than content with our DAF trucks and especially pleased with the economy and reliability of them,” Andrew concluded. “The fact that they are so comfortable to operate is really a bonus.”