Words and Photography by Howard Shanks.

It is said that; DAF’s new CF-530 has a tenacious appetite for hard heavy work, yet the versatility to nimbly run urban errands as well, and it’s all neatly packaged with a spacious low entry cabin. We sent our Technical Editor to road test in CJD Equipment’s new demonstrator CF-530 to discover just how versatile it is. 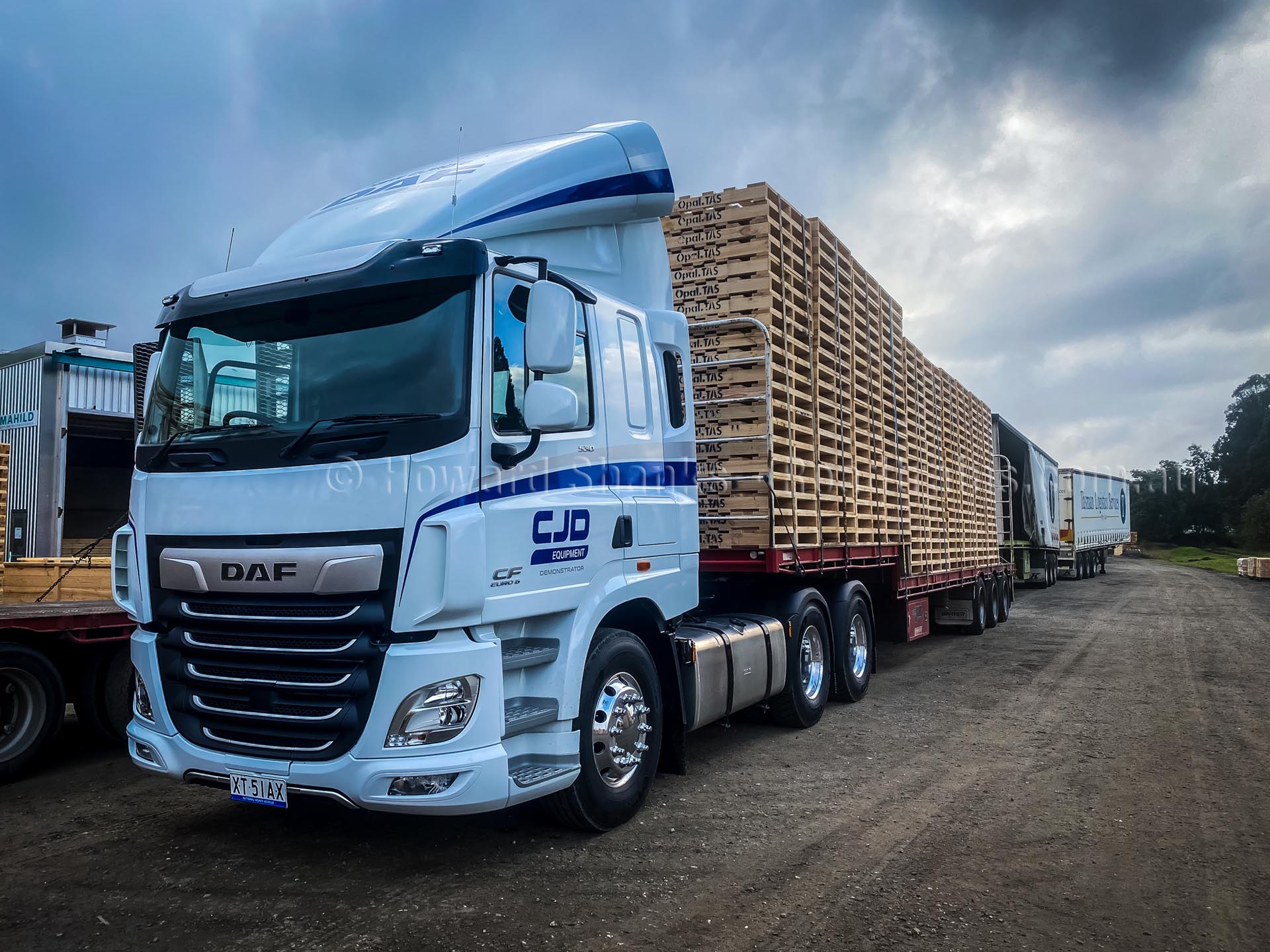 Regional Sales Manager, Chris Saltmarsh was on hand to explain the finer points of the new Euro-6 DAF CF-530. Today, instead of the customary friendly handshake, we waved, smiled and past pleasantries before getting down to the nuts and bolts of the sparkling new DAF CF.

At the Australian launch of the DAF range in Queensland a few months back, we were told that when the new Euro-6 range of DAF trucks were launched in Europe two years prior, operators flocked to dealerships to place their orders. It was smiles all around at DAF HQ because they had an instant hit on their hands. Furthermore, their continued market share leadership reflects the popularity of the new CF range.

At first glance, however, the new CF might appear as if it’s only had a stylish facelift, because the refinements to the external appearance of CF are fairly minimal, concealing the fact that major improvements to this model lie deep within and include significant enhancements to the engine, transmission and driveline. 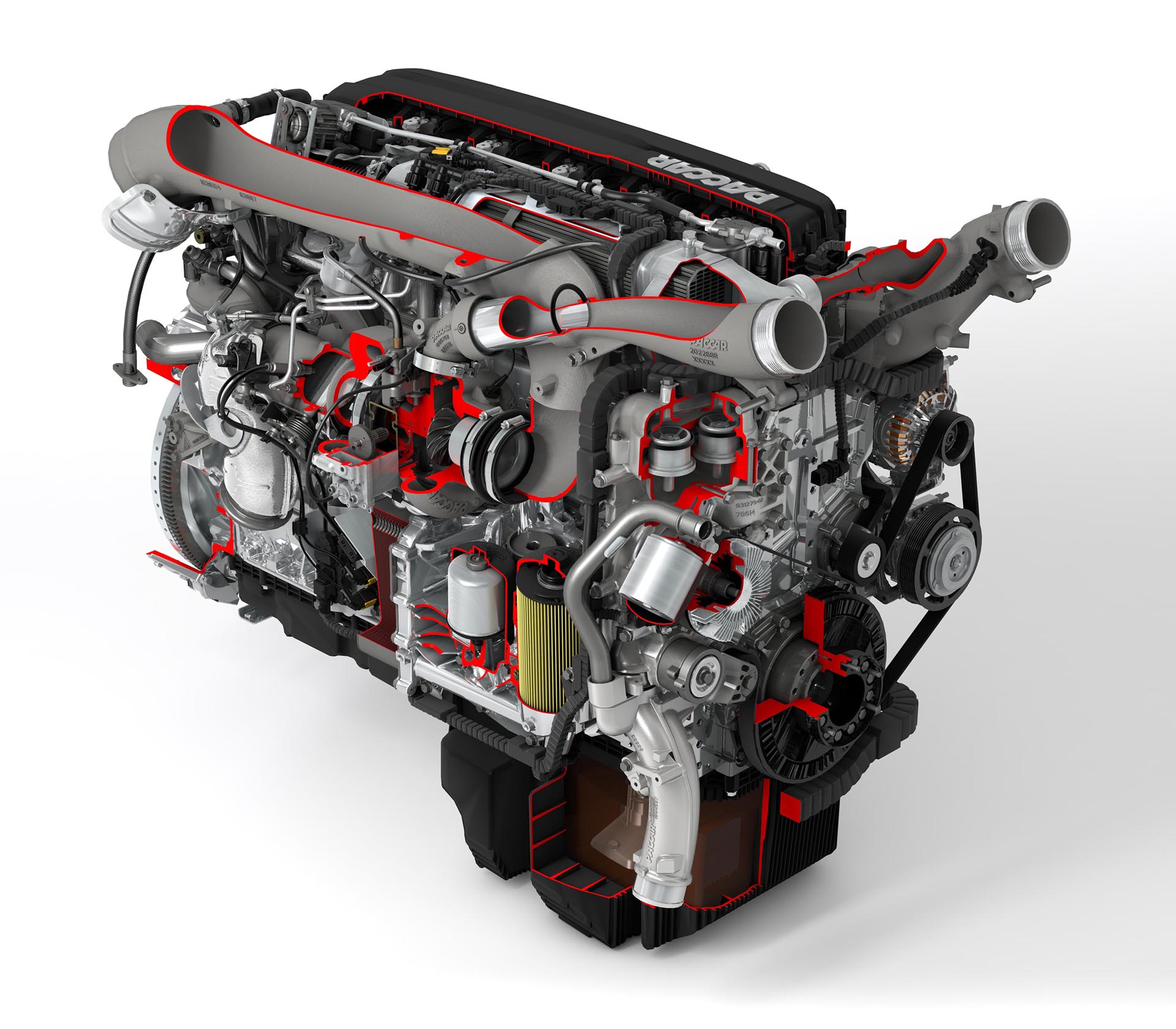 Given the minimal exterior changes to the CF, it’s presumed that somewhere in the inner sanctum of American truck-builder PACCAR lies a simple policy that states, “if it ain’t broke, don’t fix it” or maybe it says “there’s no point in change for change’s sake”, regardless of its existence or not you don’t have to look far to find hints of presence.

For instance, take the proven durability in the company’s Kenworth and Peterbilt brands that have earned PACCAR and envied reputation. Consequently, it seems, that those sacred words also apply to their European truck builder DAF.

Nevertheless, this is all good news for Australian operators; because with the inherent reliability features retained from the previous model, combined with significant improvements to fuel economy and longer service intervals from the new driveline components. Then with the added two years proven on road experience in Europe coalesced with local (Australian) validated testing of the new running gear, Australian operators are fortunate to have availability to a more matured form – version-2.0 if you will, of this new model, one that has had the all the niggling teething problems associated with new models ironed out. 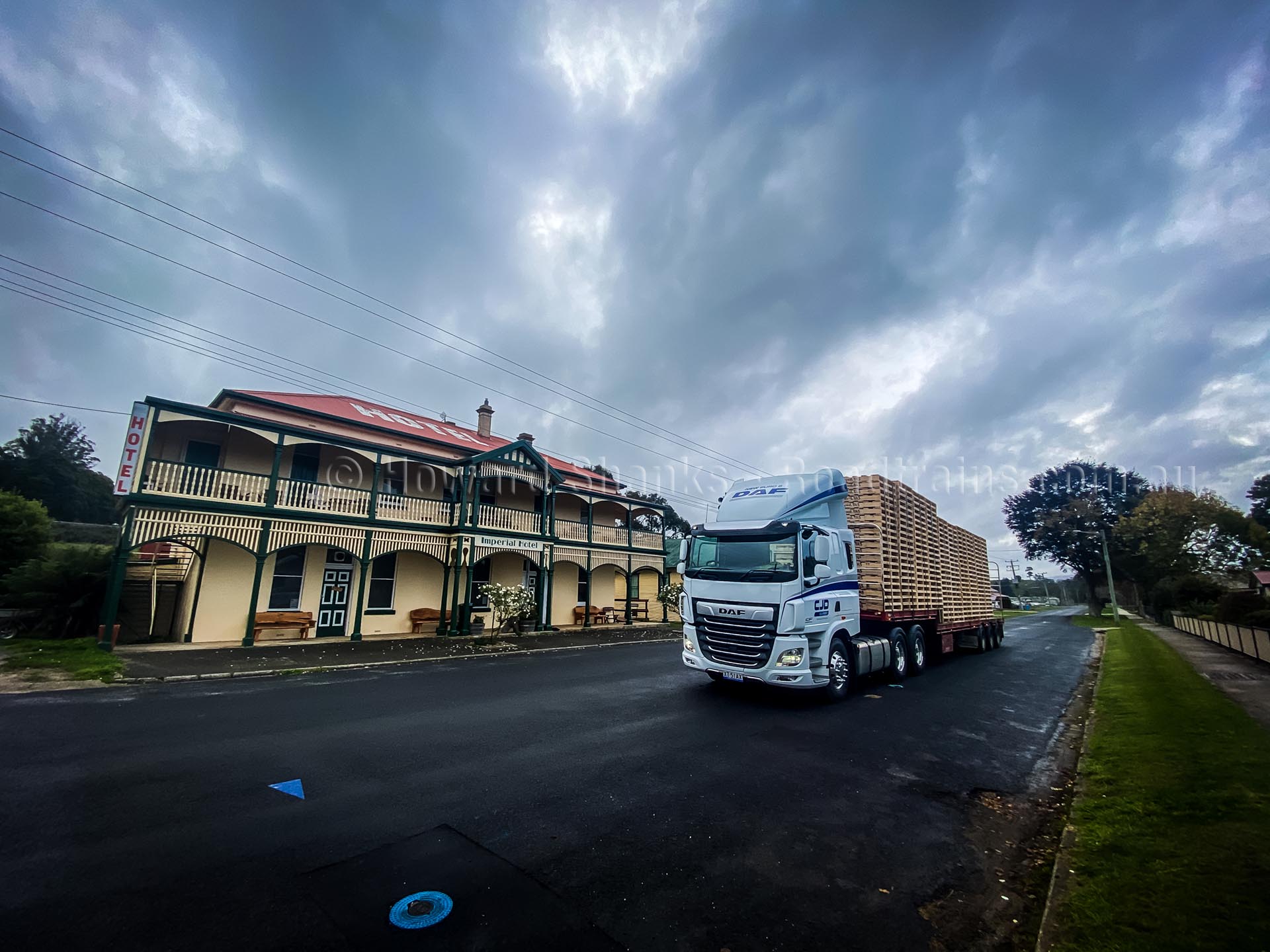 I’m sure I’ve mentioned it before, but I do like the low-cab height of the CF, and it never takes me long to settle in and feel right at home in the driver’s seat. Consequently, I was really looking forward to giving the new CF-530 a decent workout, loaded fully at 42 tonnes on a real-world run.

All the same, I was aware that even with 530HP and 2,600Nm of torque the little CF-530 was going to have to work hard on a few of the steeper hills on the run from Launceston to the Branxholm sawmill in Northeast Tasmania and back into Launceston. A ZF 16-Speed TraXon 16TX2640 transmission was coupled up to the PACCAR MX-13 engine. Rear Axle ratio was 3.09:1, CLICK HERE to read more about the TraXon transmission.

My route from CJD Equipment in Launceston took the southern approach to circle the CBD to meet the Tasman highway on the east side of the city outskirts. To paint a picture of what a sensational driving route this is I’ll steal a quote from the Targa Tasmania website; TARGA Tasmania gives you access to some of the world’s ultimate driving roads, where the most exciting challenges are waiting to be conquered. 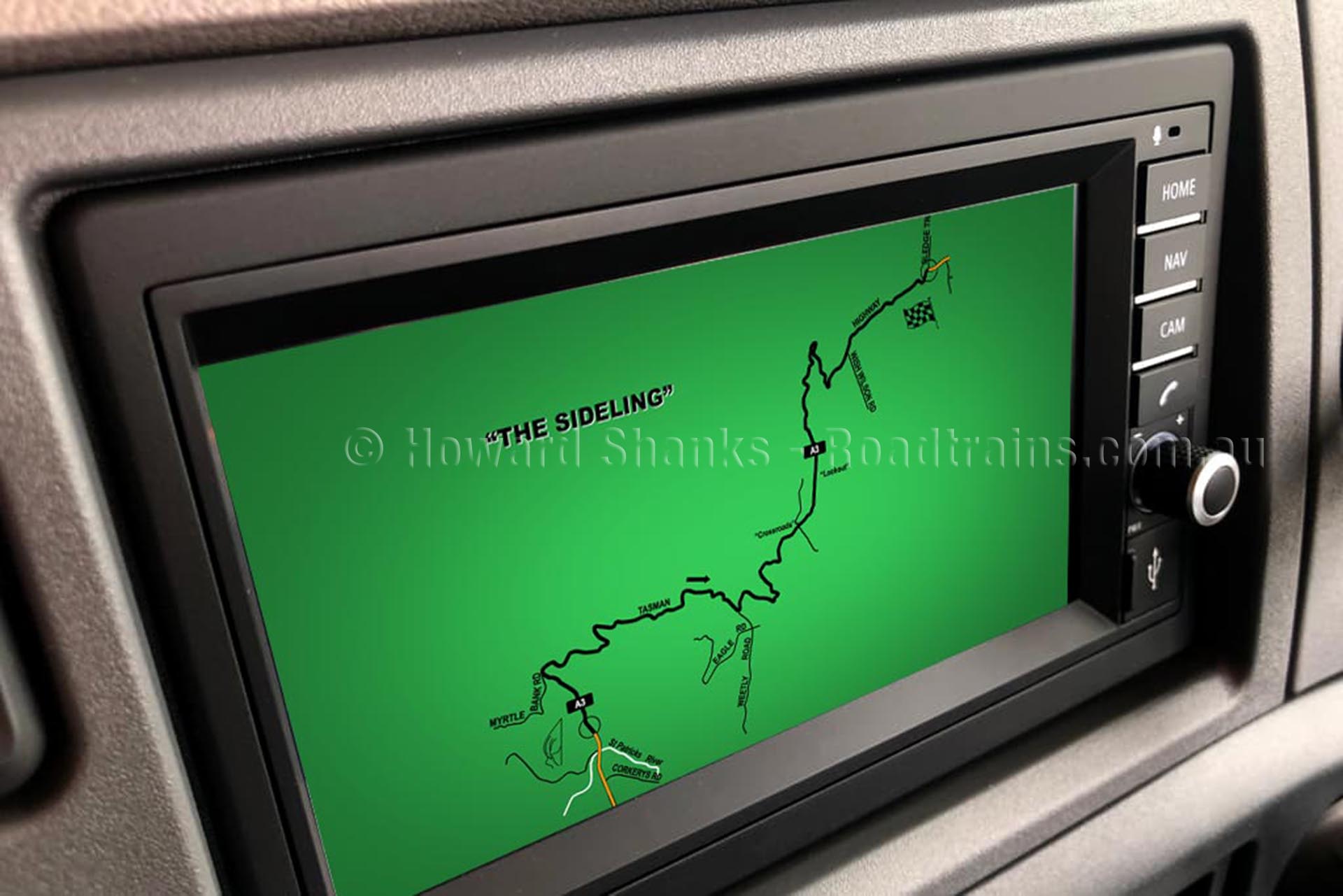 On this run, we were heading up over “The Sideling” roughly a 14 km long road made up of twists and turns and steep drops and climbs. It’s the Transfagarasan Highway of Tasmania. You may recall Jeremy Clackson referred to it as “The world’s best road” in season 14, episode one of Top Gear. It’s one of the closed key stages of the Targa series, described as a stage that takes competitors through forestry plantations with plenty of sharp corners requiring skills in car placement and gear selection. After “The Sideling” the road meanders through rich rural undulating farmland.

All in all, it was a route that would really test the true metal of this truck. Our primary goal was to check out its performance but importantly see just how economical it would be compared to other trucks that do the same run.

Indeed, driving this DAF really is a case of the truck doing what you want it to do; for instance, if you bury your foot flat to the floor it may allow you to steam up the hills, but that comes at a high price on the fuel consumption figure. So, there is an ideal way to drive this vehicle? According to Chris yes, to be the most productive and earn you the most money, for the most part, he advises it’s better to use the cruise control and let the truck make its way up the rolling countryside in the most fuel-efficient way. Rather than powering out of every bend then braking hard for the next corner.

On the steep climb up “The Sideling”, I tapped the button twice at the end of the gear selection wand to put the transmission into full manual mode. The reason behind this is because, as clever as it is, the CF-530 cannot see the steep pinches on the section of the route. This way I was able to keep the revs high up within the green economy range, maintaining road speed, without the truck trying to do a down change to save fuel. 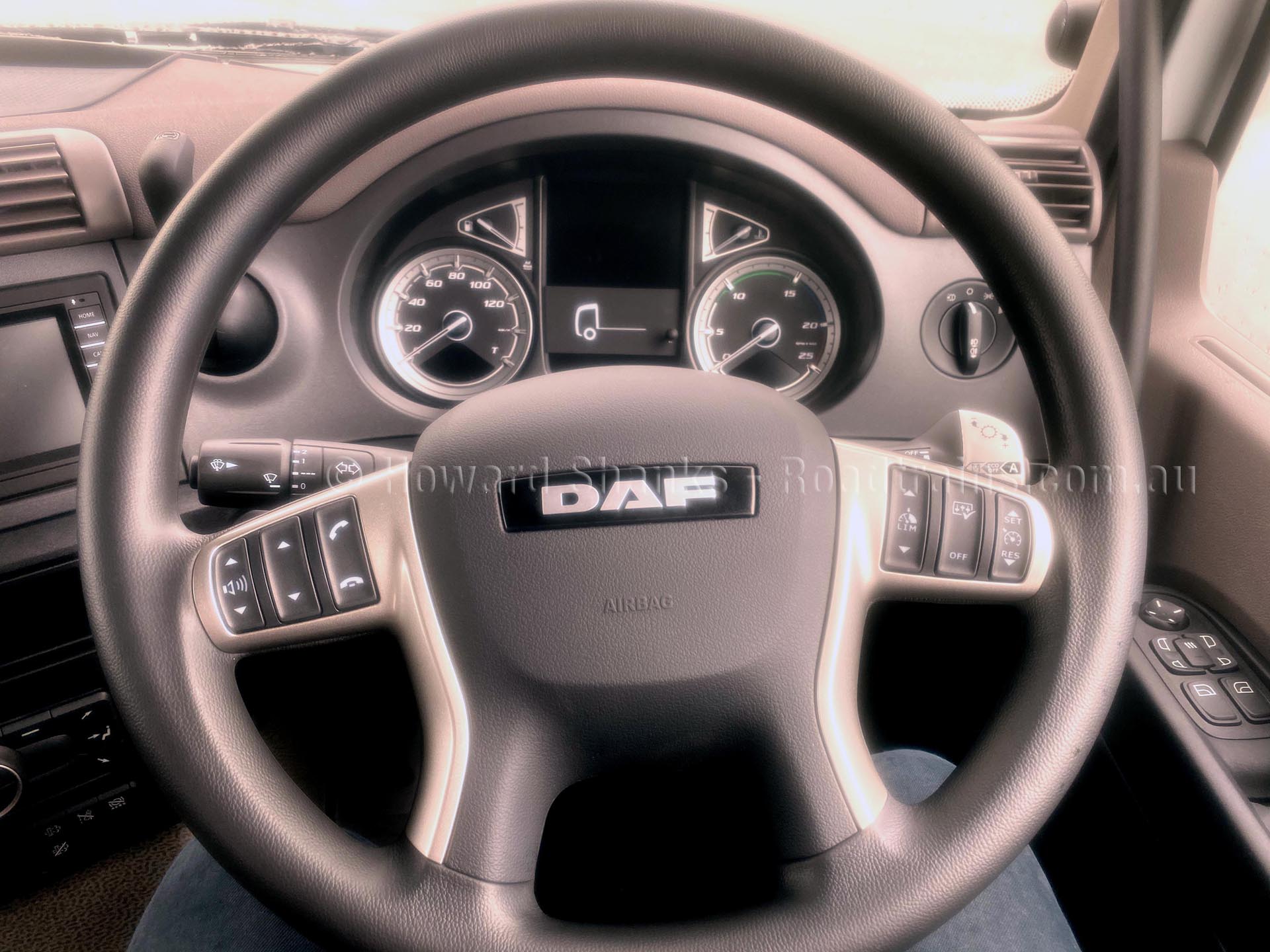 On paper, the CF-530’s MX-13 engine torque almost matches that of larger 15-litre engines. Out there on our test route, the new MX-13 certainly proved it has the tenacity to match the big boys.

On the downhill section, the engine braking was surprising more effective than I’d anticipated and the DAF descended the mountain range with minimal use of the service brakes. For the most part, it was merely a matter of alternating the engine brake wand between the first setting – 30 per cent total engine brake, the second – 60 per cent with the engine RPM up to 1500RPM and the third position – 100 per cent engine brake power with the 1900 RPM.

This highlights how important it is to train drivers on the correct operation of newer trucks. Old hands who’ve been driving since the days of petrol-powered dodges and inters might think they know everything about trucking, however, if they are not paying the fuel bills, then they need to be given a proper hand-over. And Chris Saltmarsh agrees because there is a host of gadgetry on the CF-530 that helps get the best out of it for owners. Nonetheless, drivers need to be educated on that; but thankfully that education comes from DAF when you take delivery of the vehicle.

At the launch, DAF engineers claim the new model range will be up to seven per cent better on fuel, and early indications from operators I’ve spoken to of both the new CFs and XFs seem to confirm this, with most even admitting their new DAFs are achieving even greater fuel savings. That is vitality important because every extra kilometre to the litre a truck saves is worth about $1200 a month per truck to the company’s bottom line based on a typically single-shifted truck.

The adaptive cruise control on the DAF CF-530 is a handy device providing you know how to use it – and when you are using it, you really need to keep your eye on it! It slows the truck down if it’s getting too close to a vehicle in front to minimise the chance of hitting it but to keep your momentum as a driver you need to be aware and ready to change lanes when the threat of being slowed down unnecessarily by a vehicle in front.

The steering on the CF-530 is a really sure-footed truck with exceptional road manners. When you stick this truck into a corner it sits up nice, there is no diving or cabin roll, it is very relaxing to drive. Inside the cabin, it was noticeably quiet, and having a conversation was effortless.

Should you long for CF-530? Let’s look purely at the CF-530 and its merits. It’s a great truck with impressive power and torque, – DAF’s new 13-litre is an engine to be reckoned with again. The ZF TraXon ’box is quick and responsive which adds to the versatility of the CF-530, it is equally at home running around doing pick-ups during the day and will be equally at home sliding under a B-Double for a nightly run. This makes the DAF CF530 both a superb workhorse yet a viable money-making tool that should please drivers, accountants and managers alike. We achieved 2.5km/l on our test run which was considerably surprising considering that the trucks that do this run daily average approximately 1.9-2.0km/l. 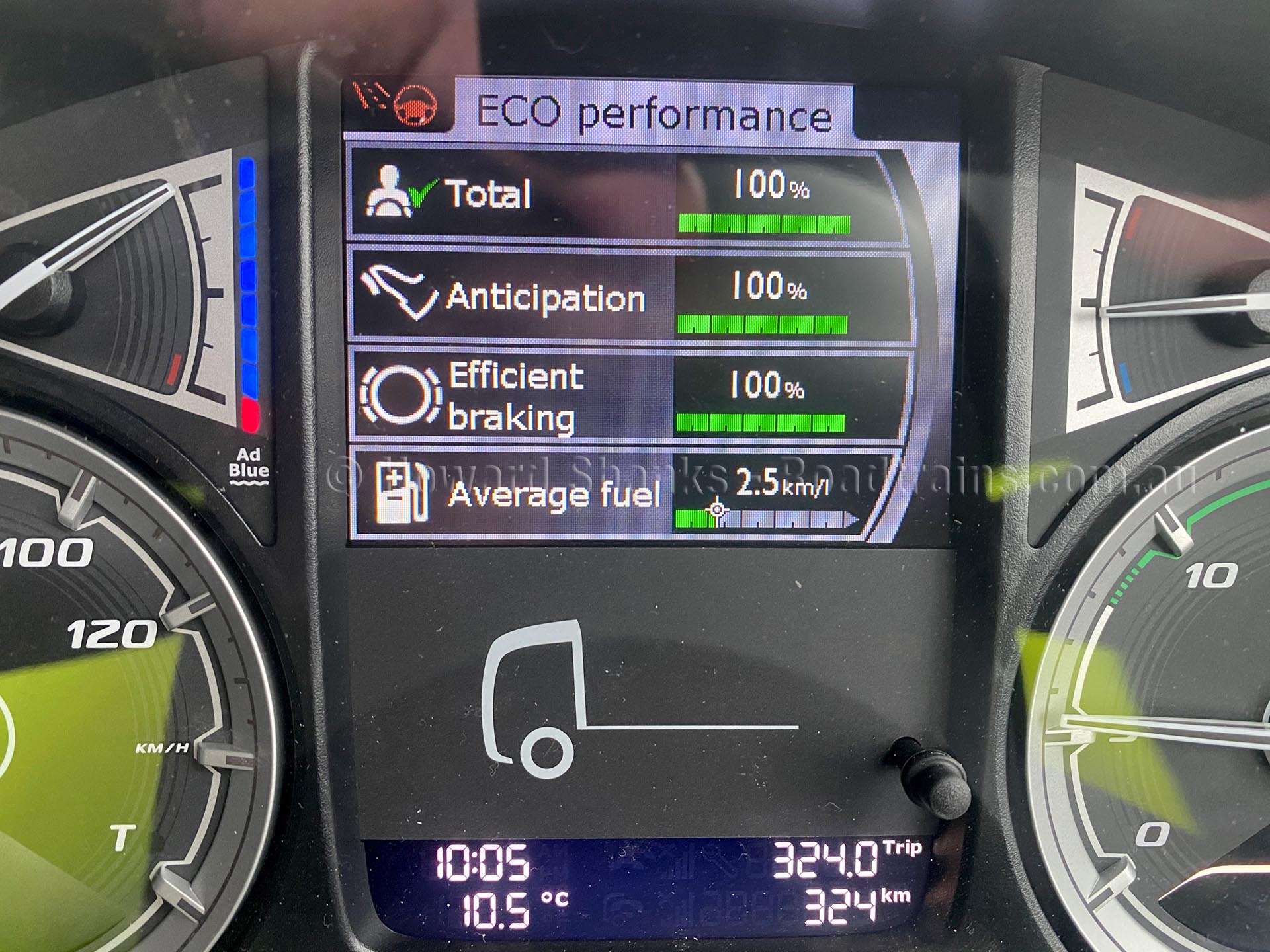 There is no question that DAF trucks are traditionally competitively priced and are widely regarded because of their reliability and you get a lot of truck for your money. The CF-530 is certainly stacking up well against the competitors. However, might be those old chestnuts of dealer back up, the deal you actually strike and a little bit of personal preference that dictates if the CF-530 tops your list.

But one thing is certain; you won’t get short-changed nor will you be disappointed if you chose a CF-530, it is a truck that certainly consolidates that gap between a prestige vehicle and a viable money-making tool.