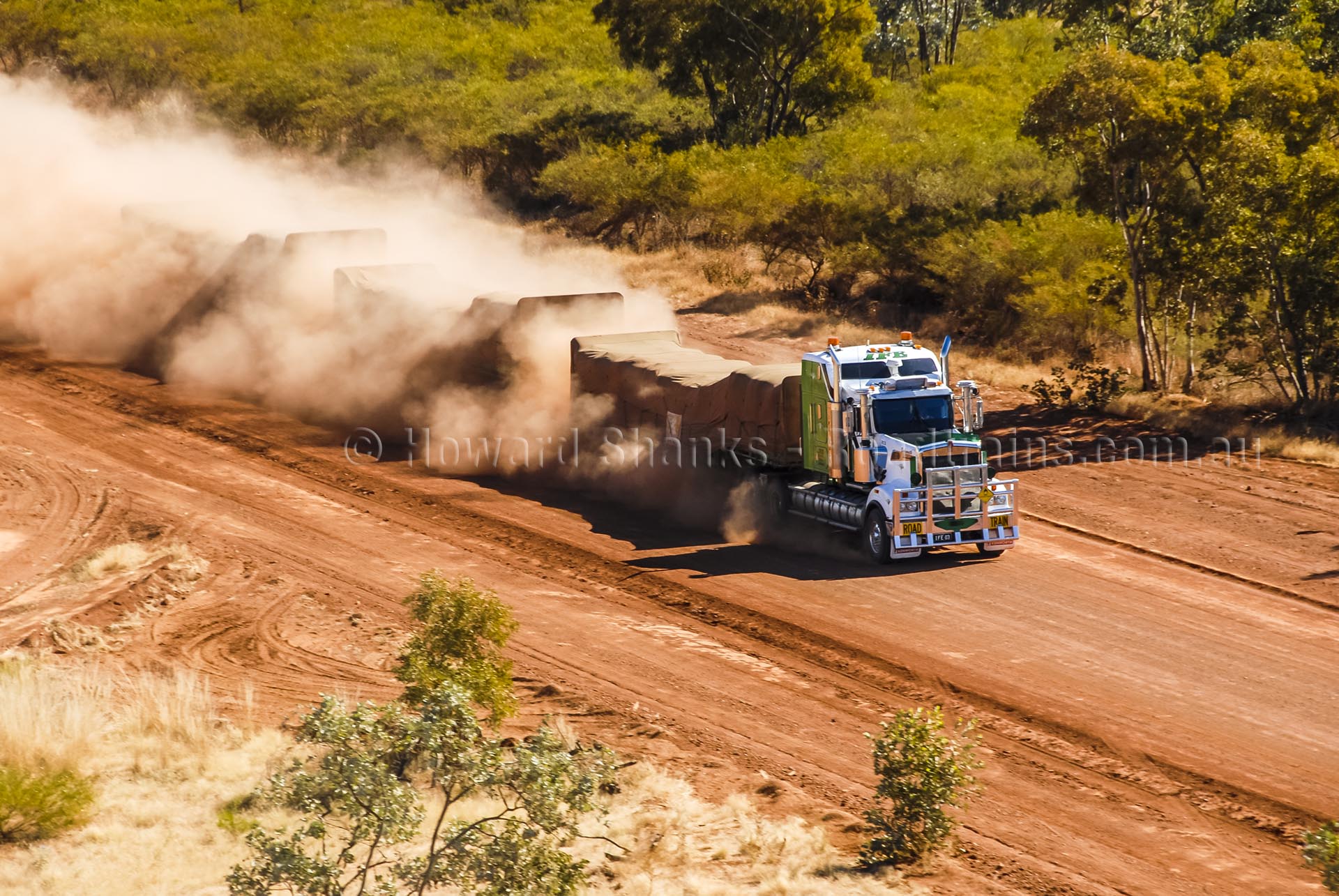 There’s not many trucks or trailers can handle the pounding of the corrugations along the notorious Tanami Track deep into Western Australia’s Kimberly country or the 400 odd km run from Cloncurry and the Century Zinc mine near the top of the NT border week in week out, except that is, for Haulmark’s heavy-duty road train flat tops and Kenworth’s rugged outback road train prime movers.

The pink rays of the new morning were peering over the horizon, birds and insects softly started their day in what was the beginning of a typically serene outback day. Even, the dust lay heavily this morning as Quinten Preston eased his Kenworth T9 road train complete with three Haulmark drop-deck trailers all neatly tarped into the parking bay at the infamous Burke and Wills Roadhouse.

The roadhouse or “The Three Ways” as the locals say is considered the gateway to the Gulf and is situated at the junction of the Wills Development Road and Burke Development Road on the route taken by the ill-fated explorers Burke and Wills. 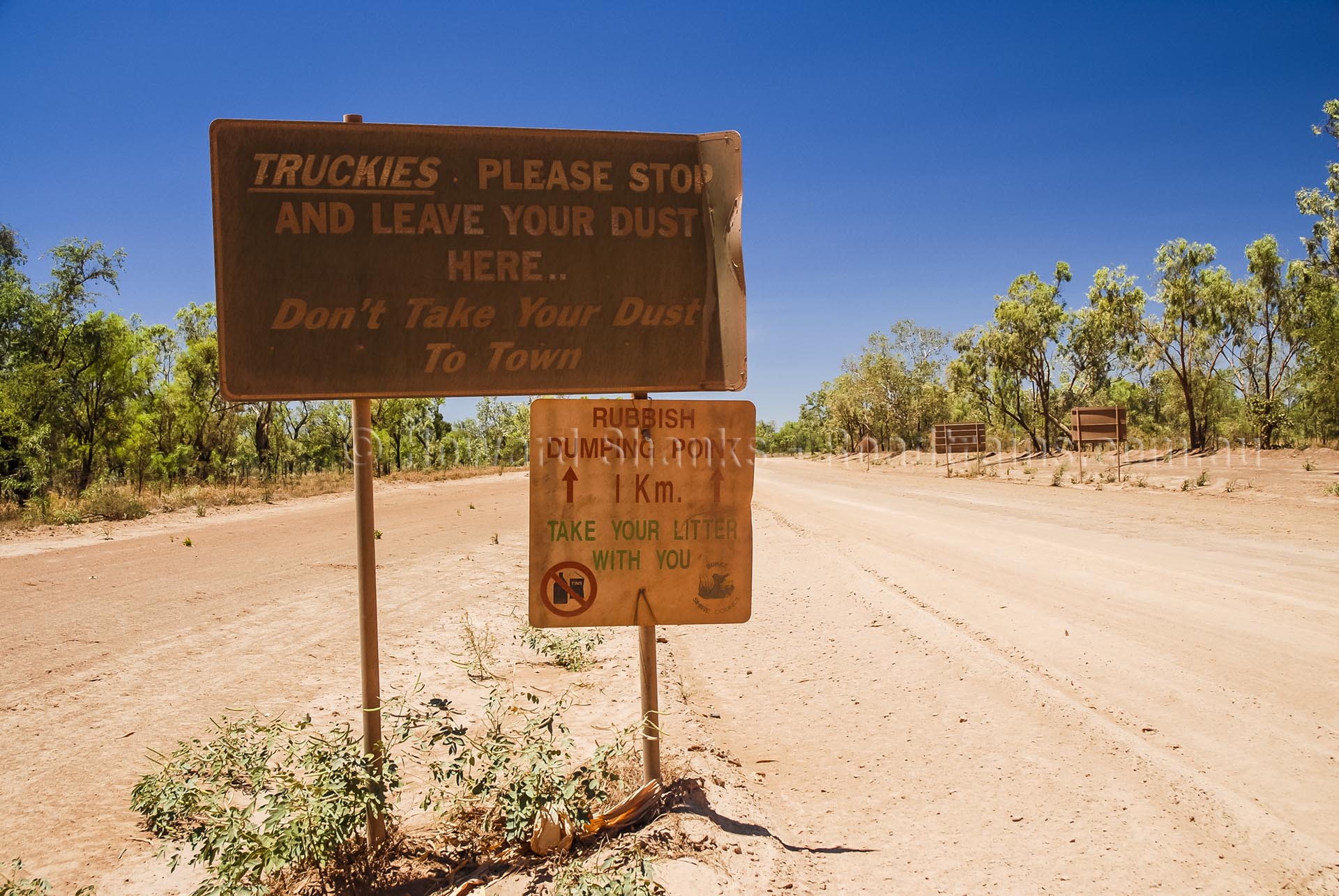 Quinten walked around his road train feeling wheel hubs and taping tyres, a procedure he does every couple hours, and then he wandered into the roadhouse. The greeting was, as you’d expect out here, friendly! Quinten slid into the same chair he sits at most times he visits this dinner, at a table by the window, and before long a large pot of coffee arrived followed by a huge plate of fresh home cooked breakfast.

Over breakfast Quinten told us about the Kenworth truck, his Haulmark trailers he commands and IFE, the company he works for.

“Anthony Kuhn is good mate of mine as well as my boss,” Quinten started. “Back in 1995 he had a couple of well used tray trucks running around servicing various mine sites in the Mount Isa area. The original idea was to hire the two trucks out, however it never eventuated as the demand for his express service the two tray trucks were providing grew to include mail runs and general freight to stations as well as mines sites all around north-west Queensland.”

“It wasn’t long and everyone out here had shortened up Anthony’s business name ‘Isa Freight Express’ to IFE and that has stuck,” Quinten continued. “The business kept growing along with the boom in the mining industry. I suppose you could say it was great in one respect but we were that busy we weren’t as efficient as we could have been.” 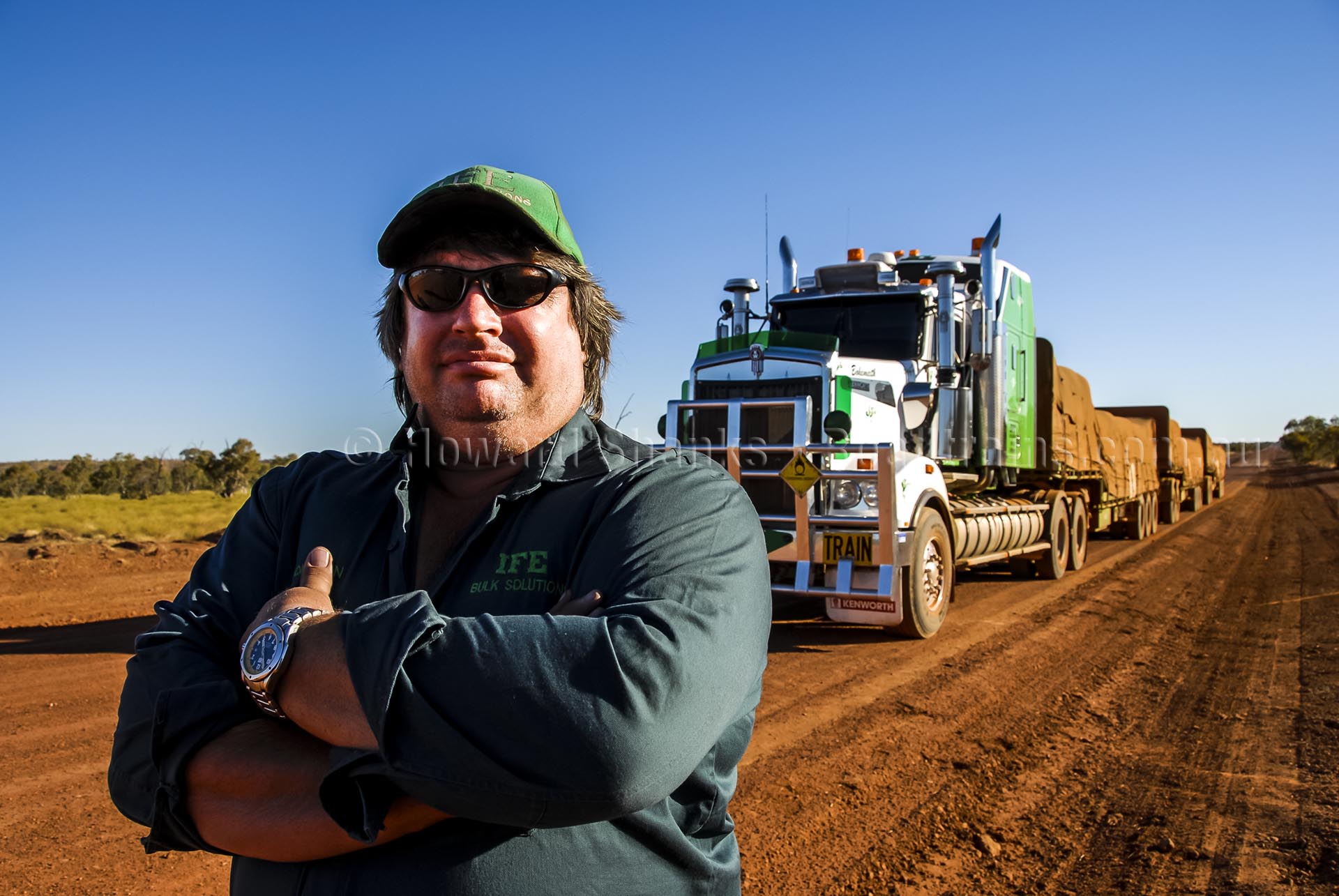 Quinten Preston and his T904

“About six years back Anthony decided enough was enough and made the decision it was time to rationalise the operation. The new focus was to be on bulk handling of mining consumables for key customers, basically tailor the operations to suit a core group of customers,” Quinten explained. “Today the focus is still much the same and that move is paying dividends as we (IFE) are growing with our current customers. Also our key suppliers are growing with us, companies like Brown and Hurley, Haulmark Trailers and Barry Stoodly who supply us everything from simple hose-clamps, to trailers and prime movers.

“Things really took off when Anthony specked his first new Kenworth back about 2000,” Quinten recalled. “It was an 8×4 K104 with three Haulmark skel-flattops and was set up to pull three ISO containers out in the Tanami Desert. Some operators scoffed at the idea, but it was that truck and combination that won us the contract because we could carry three containers instead of two as the previous contractor had done. Incidentally that truck is still working in the fleet and has done a terrific job… there is just no killing a Kenworth,” Quinten mussed.

The Kenworth T9 under Quinten’s command is unique as it is specked tough for the rough conditions way out west. Firstly a Cummins Signature that’s dialled in at 620 horsepower and punching out all of the advertised 2050 ft/lb torque powers it. “All the horses are there and they’re big ones too,” Quinten added with a smile. 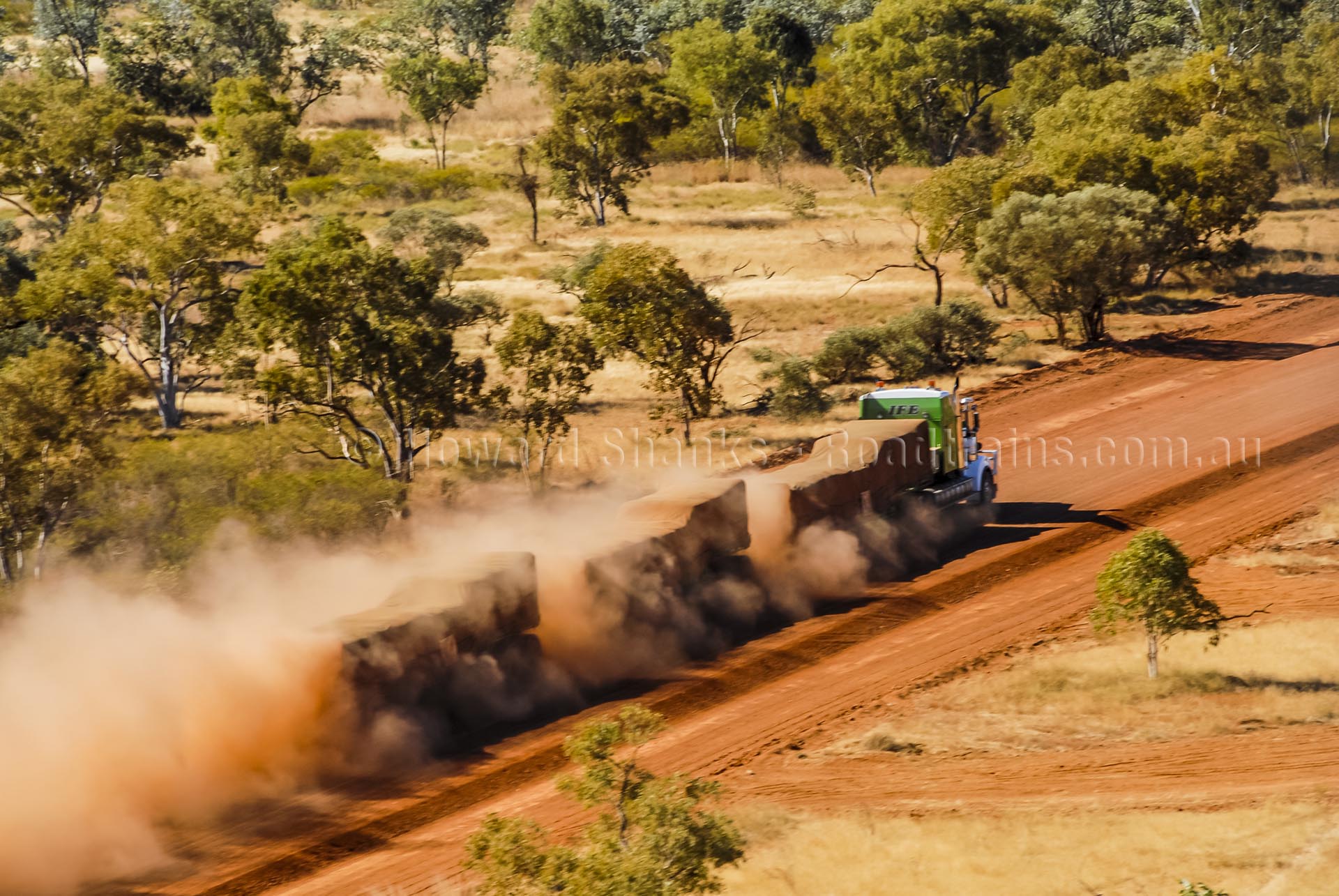 The power is transferred to the ground via an Eaton RTLO22918B 18-speed transmission. Final drive is Meritor RT52-180 at 4.89:1 ratio riding on Kenworth 6-60 low profile 6-Rod suspension. This heavy duty specked T9 is rated for 130 Tonne and comes with some unique IFE modifications.

“The first thing that’s done to our trucks is all the shrouds under the cabin are removed which is the key to allowing heat to escape. Out here and on the Tanami, these trucks can spend an entire shift, eight to ten hours, at an average speed of only 40 kilometres per hour under full load,” Quinten revealed. “I can tell you back before we did all our little tweaks you could hardly keep your feet on the floor of the truck. We also have a substantial water tank fitted under the bunk, because out here you need to carry all your own water. We may well be in the 21st century but the harshness of the outback is just the same as it was centuries ago, however, the difference now is our gear and roads make working out here a little easier.” Quinten said. 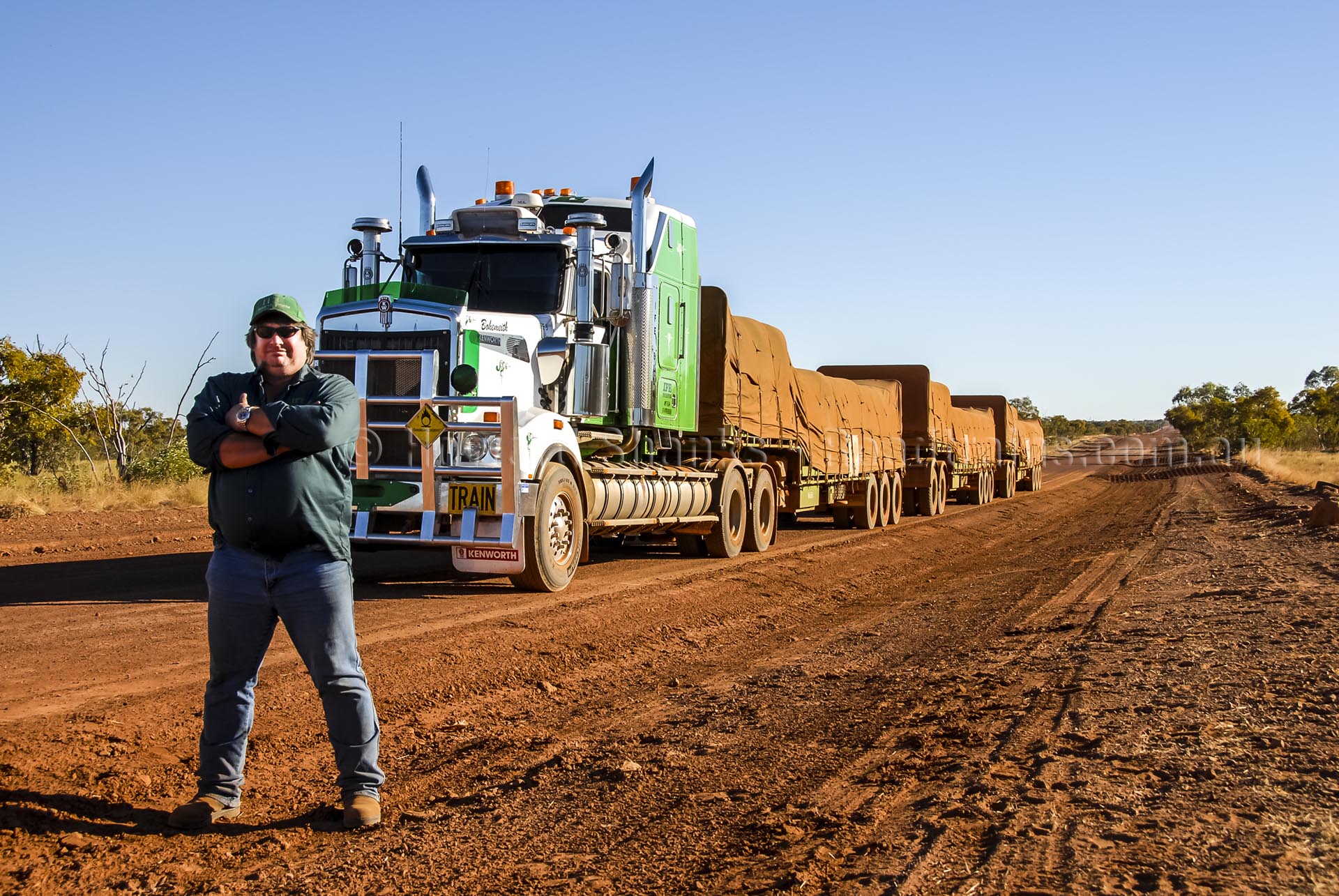 Quinten Preston and his T904

“The T9 is a great truck to drive – it has excellent visibility, it rides well and it’s comfortable, both in the cabin and the sleeper,” Quinten revealed. “And that’s saying something given the roads we travel on.”

Another feature well worth a mention and often taken for granted in a Kenworth is the driver’s workplace. For example the wipers and indicators are located all on the one wand. The engine retarder switch and the cruise control is located on the steering wheel and what this means is that the driver does not have to take his hands off the steering wheel to access the most commonly used functions.

The main switches are located in the overhead console and within easy reach. The dash is the traditional Kenworth wood-grain with gold bezel gauges to add a touch of prestige. 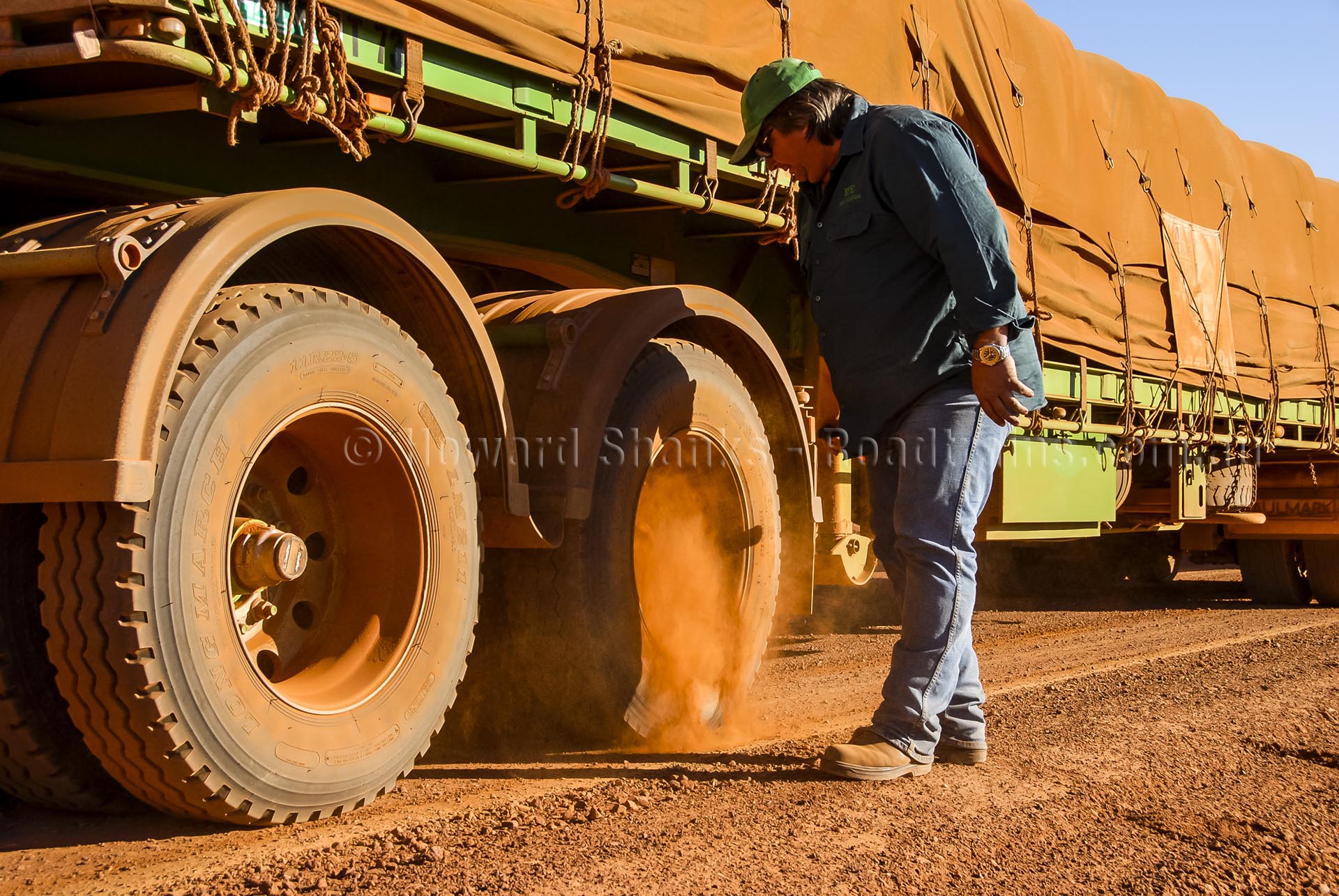 Knocking dust out of the road train wheels before entering town

The Haulmark drop-deck trailers and dollies are custom built to suit IFE demanding haulage tasks. The have inherent inner strength built into them to withstand the torturous corrugations of northwestern Australia. The main chassis is the strongest in the marketplace and the need to be too, when you consider the load they carry is the high explosive oxidising agent, ammonium nitrate.

The suspension on the trailers and dollies is tried and proven heavy-duty Haulmark leaf spring. “These Haulmark suspension and axle combinations have really proven themselves over the years not just in our work, but with cattle carters and bulk side tipper operators as well. They’re simple, tough and don’t break,” Quinten said. 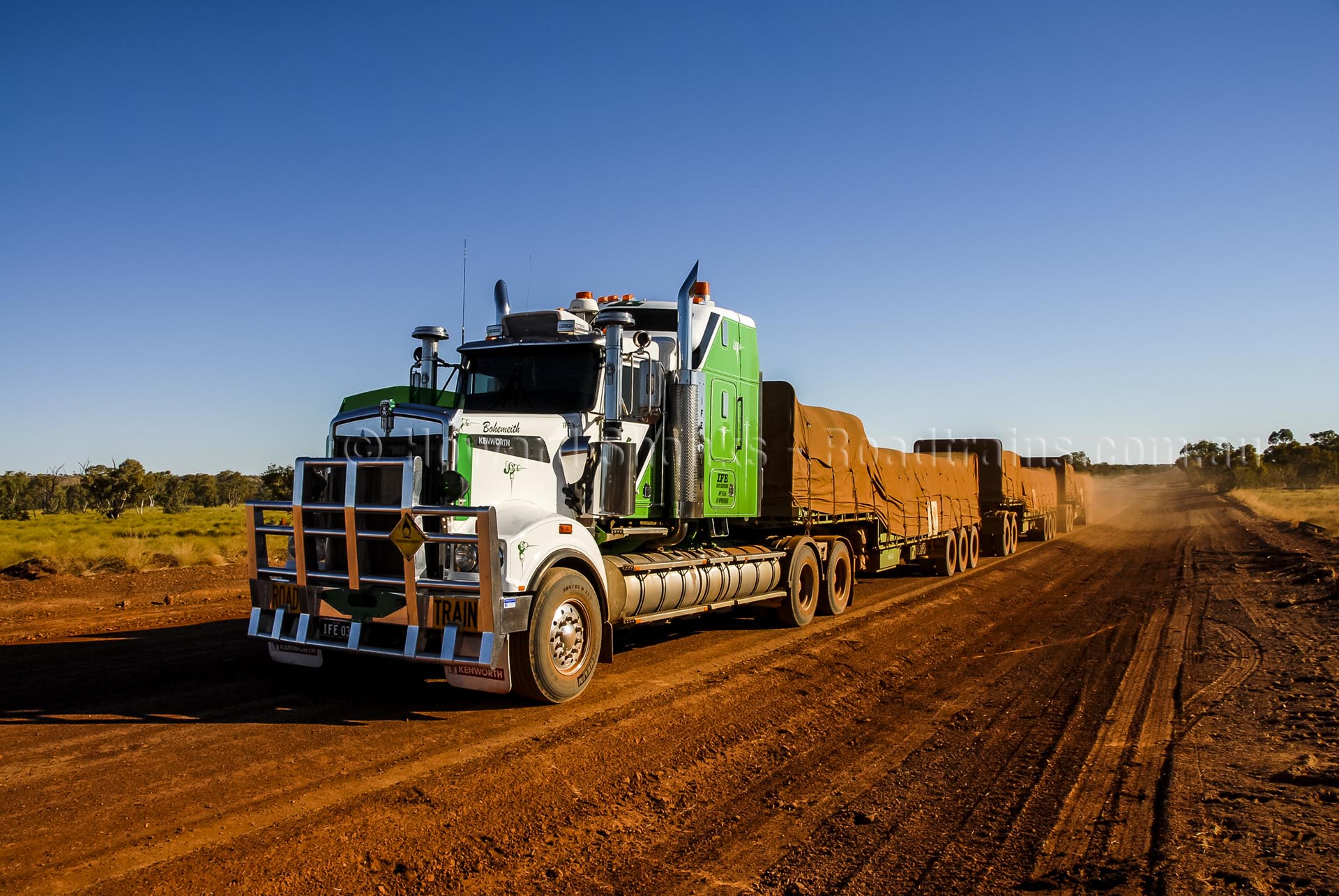 The tarps are made by Haulmark Trailer’s sister company Rocklea canvas and built to with standard the rigors of outback haulage. The tarps are made in a 12oz premium quality rip stop Kordux. They feature 6mm rope with their famous run and fold seams with extra double stitching in the critical areas and have robust eyelets with sturdy D’s in the shorteners.

“It is the total reliability package of a Kenworth truck and Haulmark trailers that myself as a driver appreciate as well as management,” Quinten added. “There is no question that a Kenworth truck and Haulmark trailer is the preferred combination for these conditions in the north by fleet owners as well as drivers. Given the nation wide driver shortage fleets like ours can’t afford to have unreliable equipment, not only would we let our customer down, but also the good drivers won’t tolerate inferior equipment.”

“When you are paid on a kilometre basis as many drivers are today, the driver wants a truck that will get there and back without a breakdown, because drivers don’t get paid when the truck is broken down on the side of the road. Conversely if a driver is paid on an hourly rate the owner doesn’t want to be paying wages for a driver to sit on the side of the road waiting for the truck to be fixed.”

“One thing I must say is that the service we get from Brown and Hurley in Townsville is first class,” Quinten added as the door to the roadhouse squeaked open.

“Are you blokes having a day off?” the newcomer to the roadhouse enquired. “Quinten glanced at his watch, smiled and agreed it was time he, his Kenworth T9 and Haulmark trailers went and stirred some dust on the last leg into the Century Zinc Mine. 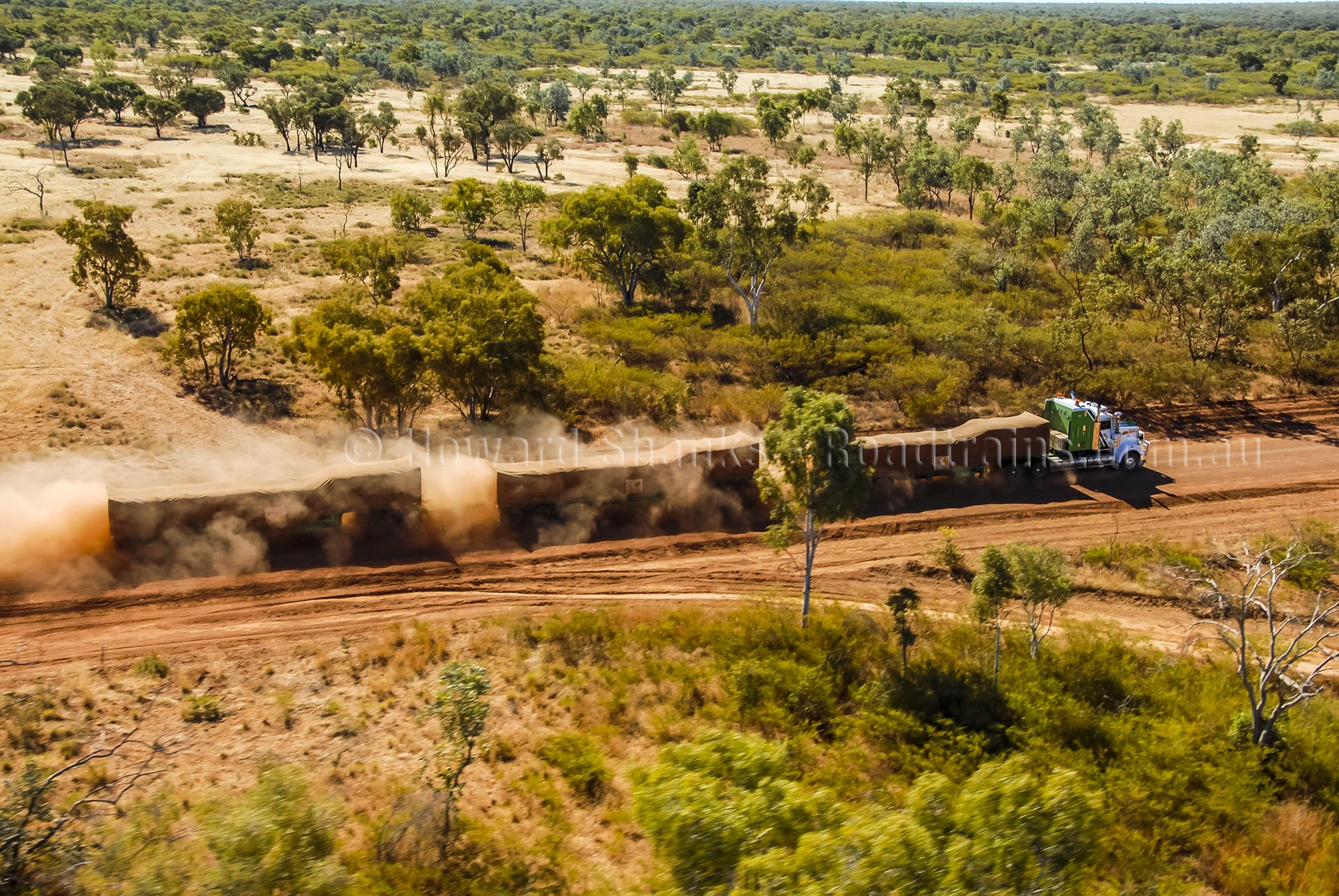