Growing grain and lots of it is what they do best in far north-west New South Wales, however with variable rainfall over the past few years it has highlighted the economic and environmental fragility of broadacre farming systems. We asked Howard Shanks to investigate one lot of farmers who are taming the land with their Kenworth trucks.

The message left at the roadhouse read, “if you’ve got the time and you like big machinery and you don’t mind a bit of drive then give Gavin Zell a call up at Collarenebri and see if you can check out their new Kenworth T9, it’ll be well worth the trip…” A few moments later I dialed the number on the piece of paper, it rang a few times before a friendly voice answered, “hello, Gavin speaking”.

“Yes, I’ve been expecting your call,” Gavin said after I’d introduced myself.

Shortly after Gavin had passed on some detailed directions, I quickly realized that I’d a decent eight-hour drive ahead of me. The plan was make it to Gilgandra that night, then head up the Castletreagh Highway a little before daybreak, which, if everything went well would put me somewhere, the Zell’s place around lunchtime the following day. 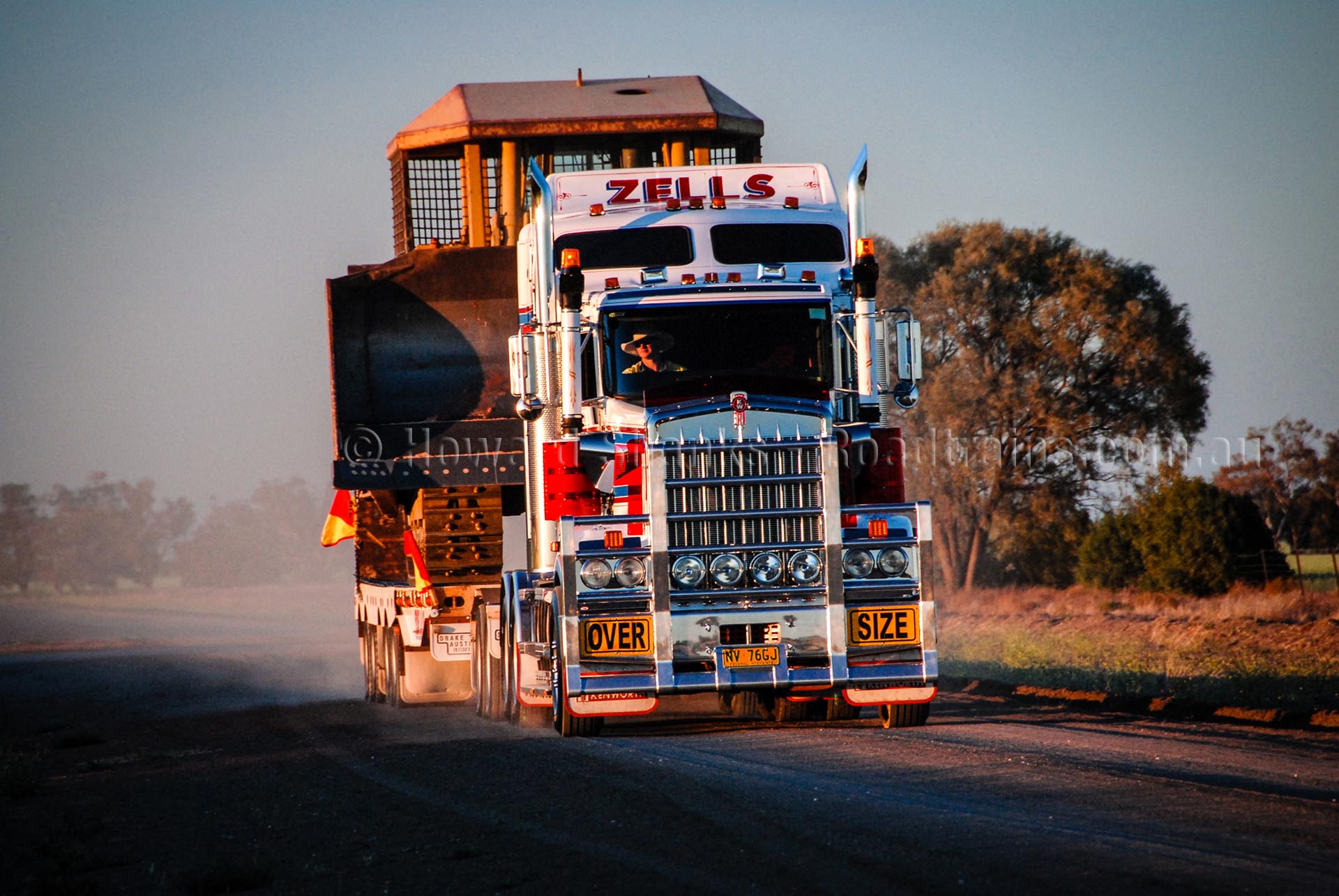 Collarenebri, as I discovered, is a quaint little rural town where travelers tend to merely glance at the old buildings and quiet streets as they pass through. Located approximately an hour and a half west of Moree in Northwest NSW on the Gwyder highway, the major trucking route for freight heading between Brisbane and Adelaide or further west to Perth. However one tourist brochure does describe the town as one of the best kept secrets in north western NSW and that’s largely due to the reported great Yellow Belly fishing in the nearby Barwon river, but more on that another time.

A little sign with the word “Taroo” hanging from a pole by large white gates swung lazily in the breeze, in the distance were the large machinery sheds Gavin had described the day before. 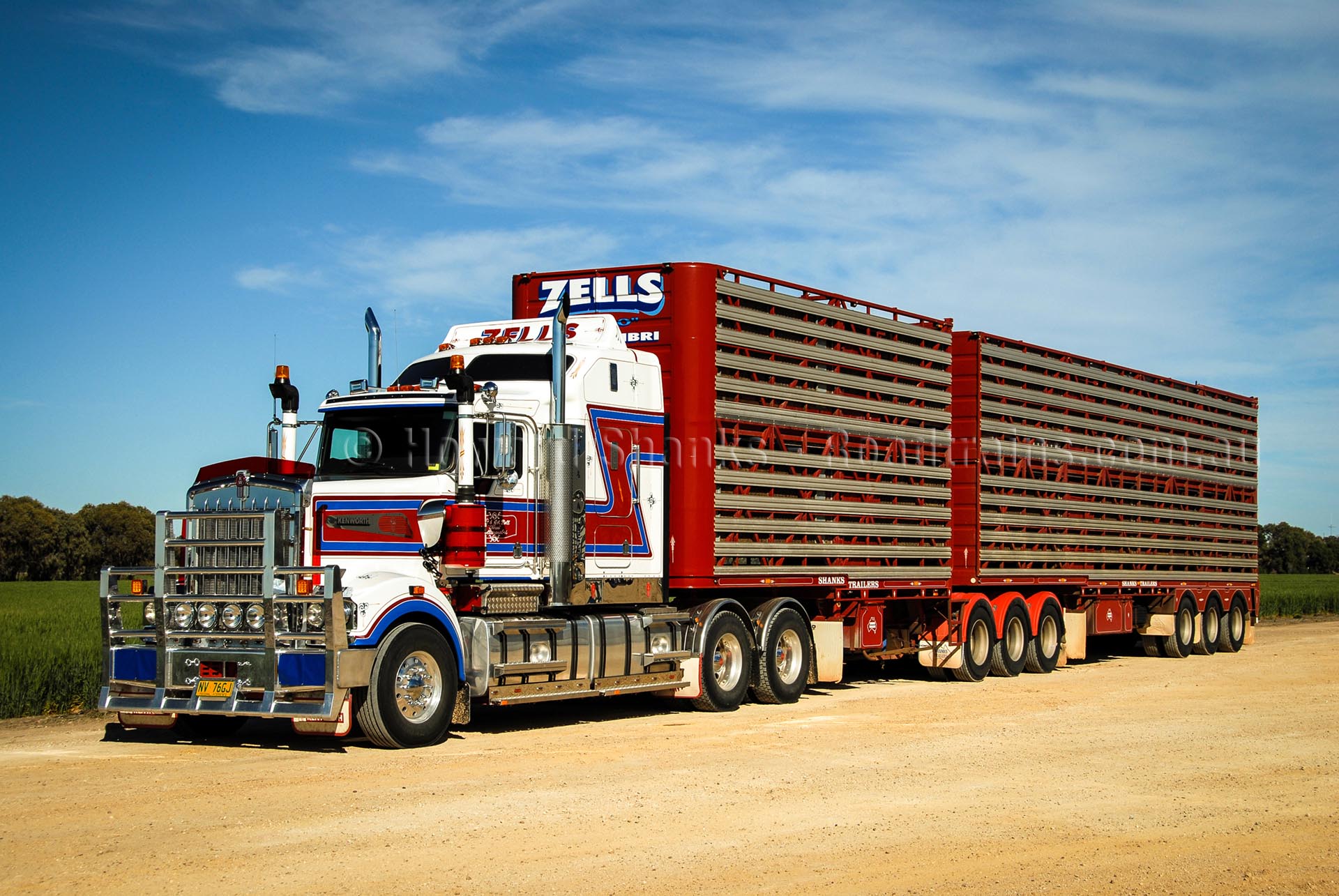 A few moments later at the homestead, Gavin extended his hand and with a welcoming smile introduced himself and said, “Come in and have some lunch first, then we’ll show you the trucks”.

The Zell’s are traditionally farmers and run a diverse farming operation in the region, from cattle and sheep at a nearby farm to the their broad-acre cereal crops. The overall operations is overseen by Gavin’s parents Bill and Judy with Gavin and his brother Wayne managing the daily workings of their farming interests. Here on the 18,200 hectare (45,000 acre) Taroo property, is one of their biggest cereal cropping farms, which produces an annual harvest in the vicinity of 40,000 tonnes. It’s little wonder then that their trucking side of the operation resembles a transport small fleet. 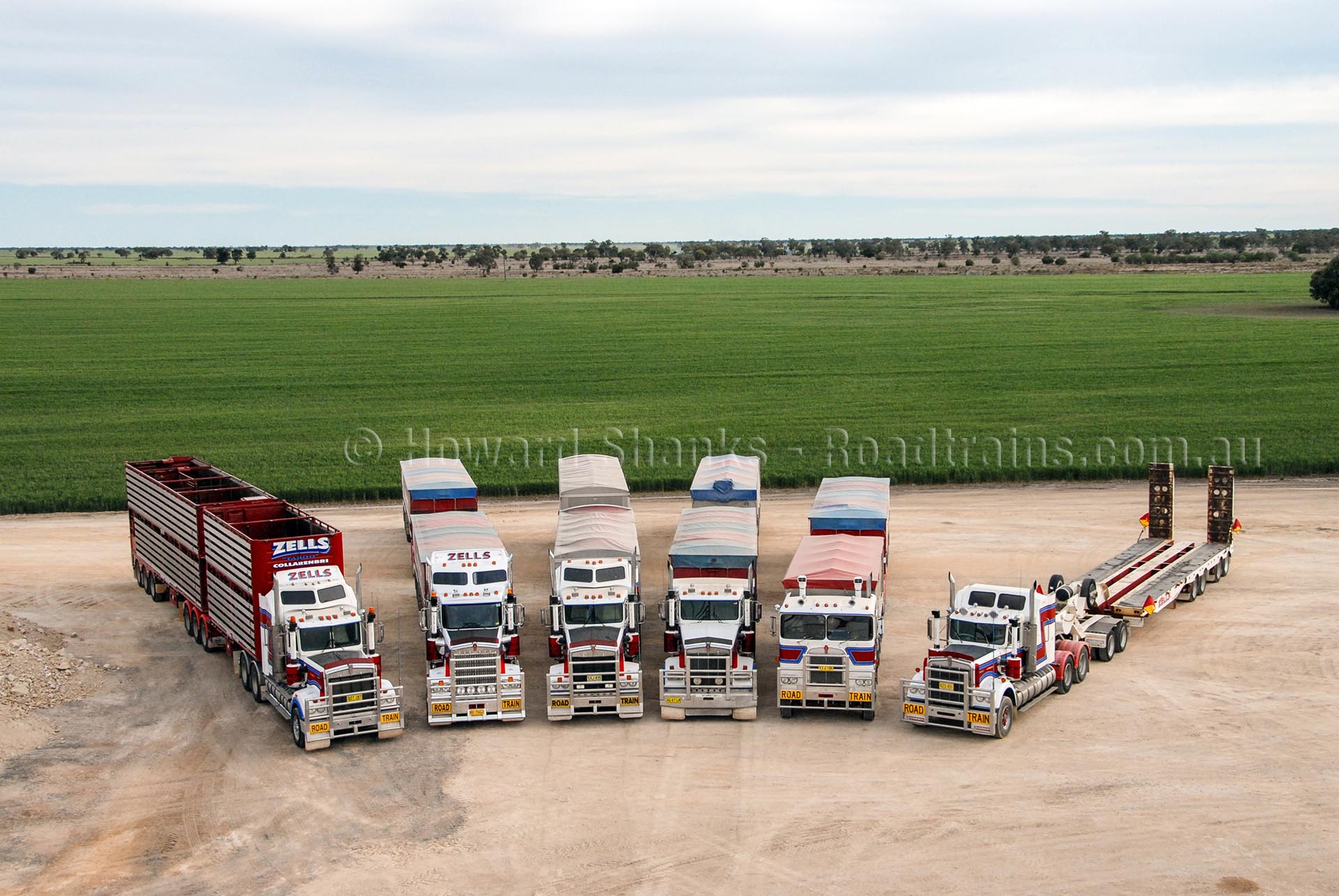 Their latest acquisition, Kenworth’s flagship the T9, is about as pure a Kenworth as you’ll see, and came kitted out with genuine PACCAR Parts’ “bling”. In term of hardware, it’s powered by Cummins’ 600 horsepower Signature engine that’s coupled to an 18-speed Roadranger transmission which in turn drive a pair of big heavy duty rear axles.

Wayne has taken the new T9 under his wing, and it is kept busy hauling any of the combinations from the their B-double stock trailers, through to their float and roadtrain tipper combinations.

“The beauty of the Kenworth product is the fact they’re a very versatile truck which suit a broad range of applications such as we require on our farms,” Gavin explained. “They’re (Kenworth) also one of the only trucks we’ve found which are robust in enough to withstand the hash conditions out here in far western NSW too.”

The tyranny of distance and isolation has driven the Zells to implement vertical integration into their farming operation, and that runs right through from their home grown vegetables to their massive 600 plus horsepower tractors that tow twin Flexi-Coil ST820 seeders which can plant an incredible 33.5 meters (110 feet) in one pass.

“Our busiest time is the harvest season,” Gavin added. “We have all our trucks and harvesters running pretty much flat out. However we’re pretty lucky because we’ve a loyal crew of drivers that return each year for the harvest.” 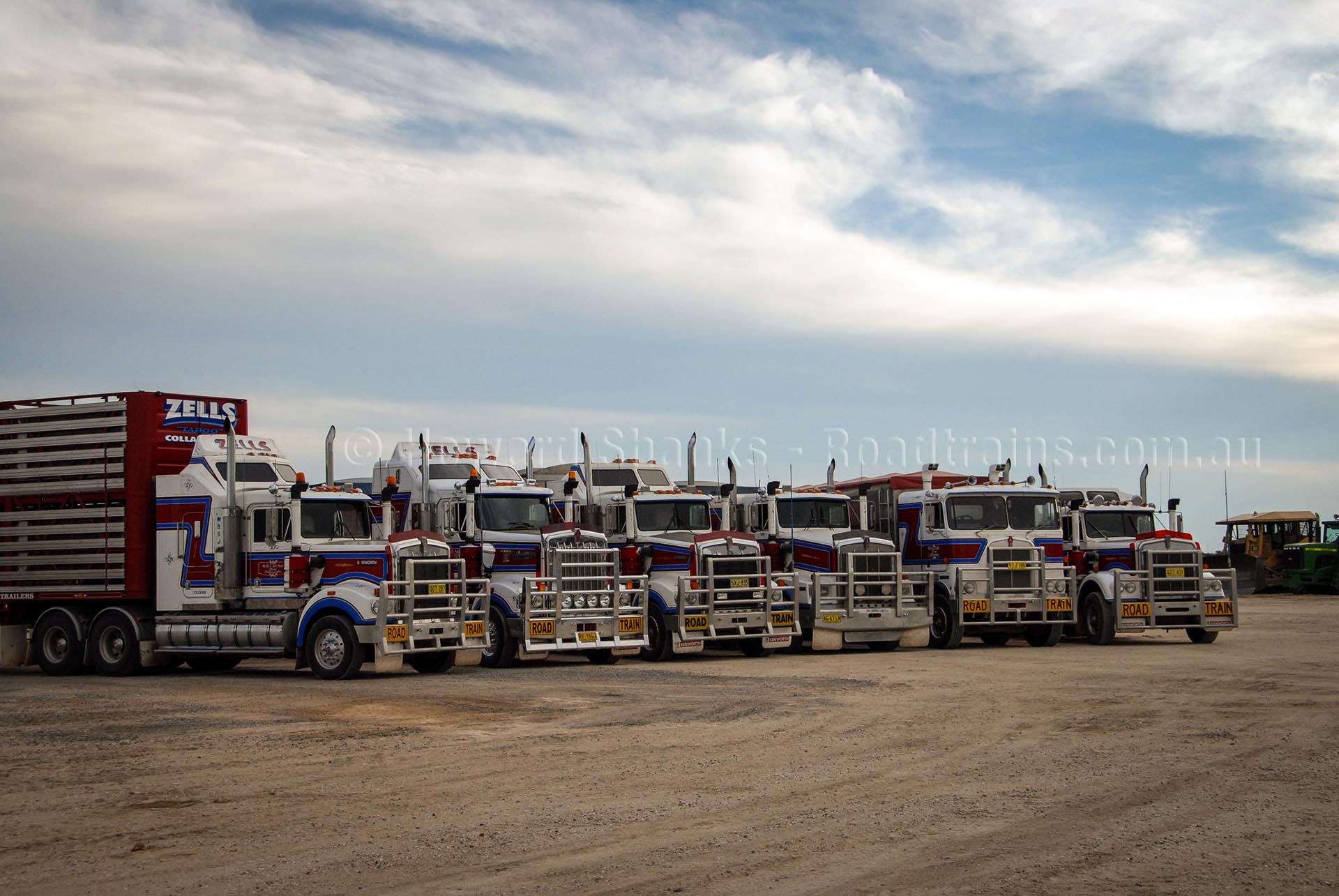 “We probably do things a little differently to other farmers, Gavin continued. “Because while we send some of the premium cereal and high protein wheat crops into the grain board, which are predominantly shipped overseas. We also store a lot of grain here in our own storage facility which we then on sell to feedlots and use for our own stock farms during the year.”

Meantime back to the trucks and there’s some unique vehicles in their fleet. Arguably one of the more unique working trucks is their 1981 K100.

We’re told that it is one of the first of three factory built tri-drives that Kenworth produced in the early eighties at their Bayswater facility further cementing the way as the leader in custom engineering. It incorporates Kenworth’s unique load sharing rear air suspension, which delivers even traction across all three axles. It is powered by a Detroit 8V92 two-stroke diesel. 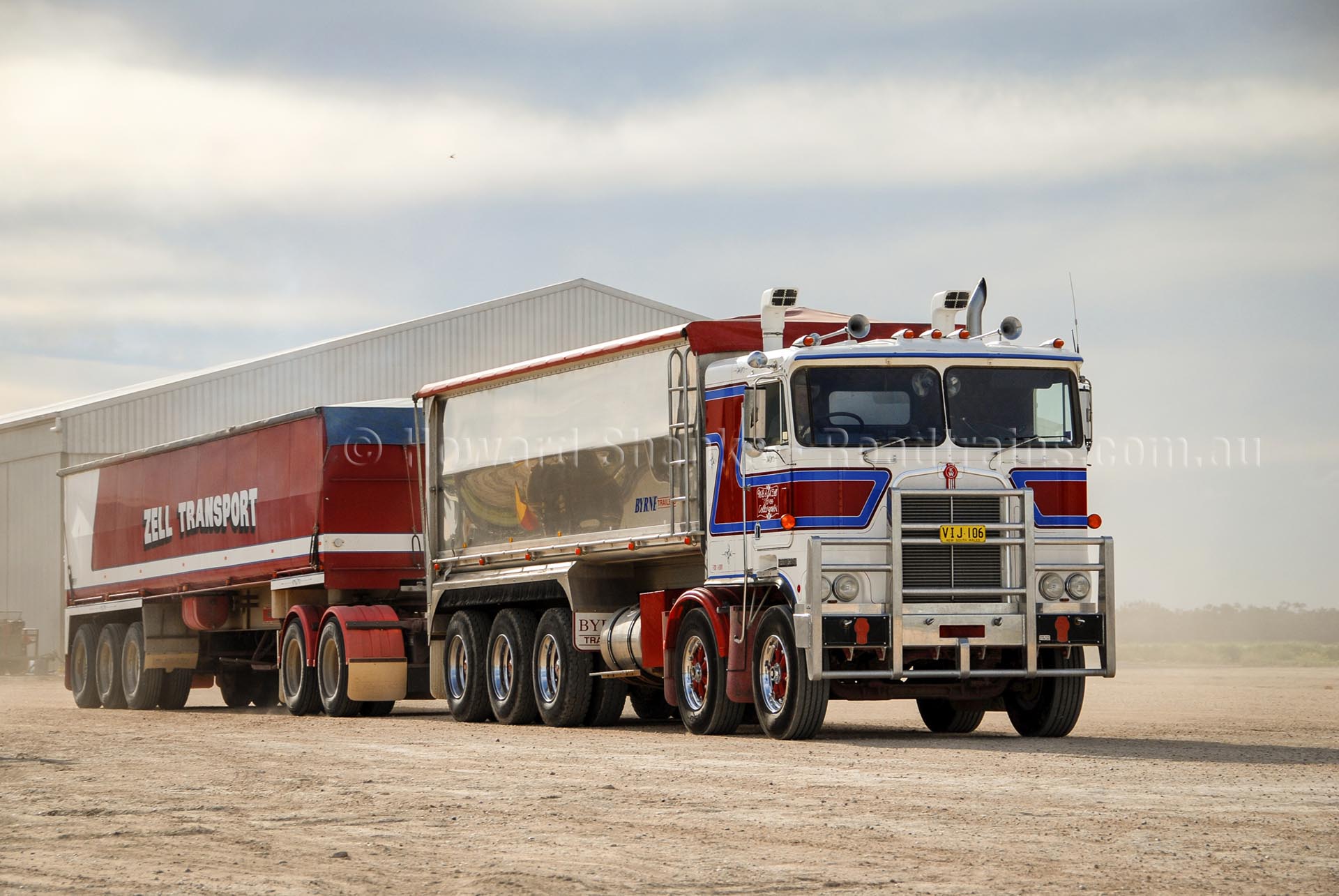 It’s also probably worth takings a second glance at the cabin too because even though it looks like a sleeper cab, it is in fact only a day-cab with cabin extensions. Note how the exhausts and air-cleaner intakes are hidden behind the cab-extenders.

“Dad, spotted the cabover in Sydney some years back and thought it might provide a better payload being a twin-steer and tri-drive along with the added advantage of being able to be versatile in the paddocks,” Gavin volunteered. “It’s been a good truck and we’re getting roughly the same payload with it when it’s coupled to a dog trailer as we do with our traditional Type-1 roadtrains.”

Their 1983 W-model is powered by a Cummins big cam 400 and at young age of 34 years is still proving to be a valuable asset around harvest time. 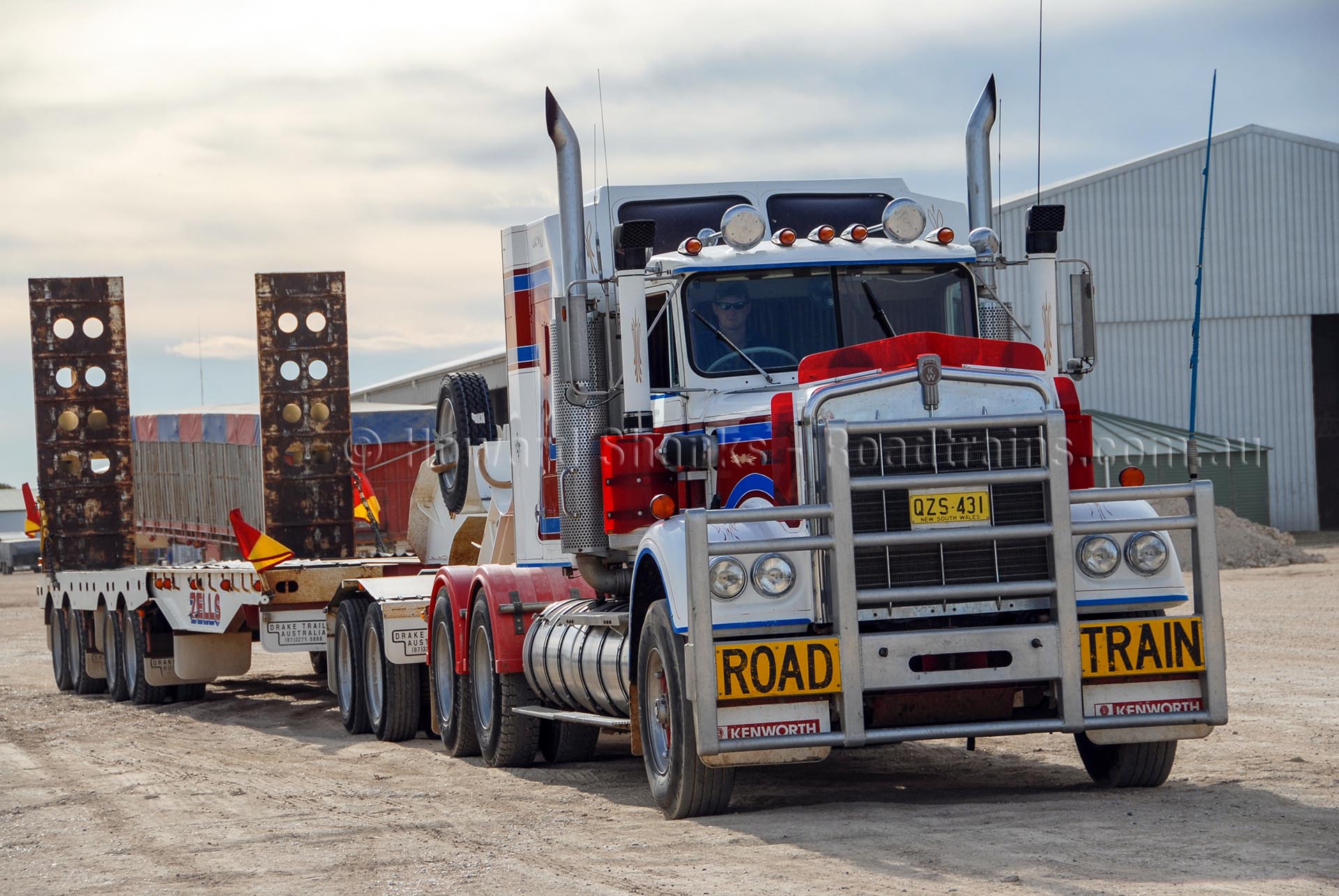 Their 1989 T650 is one of the earlier versions of Kenworth’s more popular rugged end models and again is still earning’s it keep on the farm. The classic T950 is a 1994 model and powered with a Cummins 500 horsepower engine, and finally there is the traditional 1996, T900 which has a 525 Cummins.

Bill is first to admit that the evolution in road transport is something he never would have envisaged when he first started purchasing Kenworth trucks nearly four decades ago. “This new T9 will probably have nearly a million kilometers on it in four years,” Bill explained. “Compare that to the first trucks that carted grain from my father’s farm shortly after the war when he commenced farming, and they never even came close to covering half that distance in the that time.”

“There is no question we get a good run out of our Kenworths and we’re hoping to get the same out of the Cummins product,” Bill added. “Mind you, we do receive good service from Cliff Swane and the Inland Truck Centres Dubbo dealership.”

However, as the afternoon light faded into one of the more spectacular Outback sunsets this country is renowned for, we asked Wayne what his impression of the new Kenworth T9 is?

“One of the first things you notice about the T9 is the exceptional visibility out over the long bonnet,” Wayne began. “The rear vision is another aspect worth a mention especially with the large wide angle mirrors”. 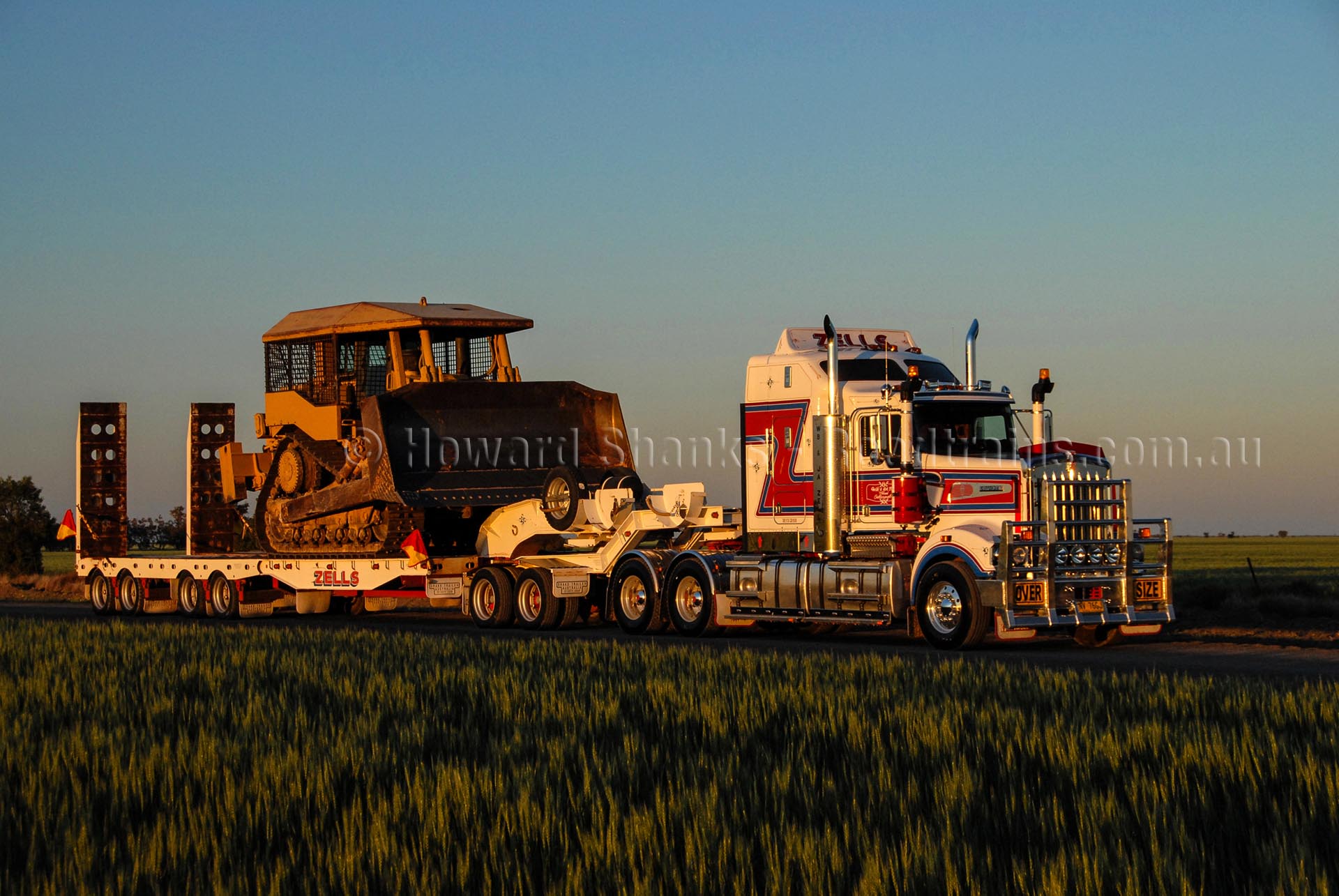 “Probably another feature well worth a mention and often taken for granted in a Kenworth is the driver’s workplace,” Wayne continued.  “For example the wipers and indicators are located all on the one wand which makes them simple operate. Meantime the engine retarder switch is located on a wand and the cruise control on another wand and what this means is as a driver I don’t have to take my hands off the steering wheel to access these more commonly used functions.”

“I like the fact the switches are located in the overhead console and within easy reach too,” Wayne added. “The dash is the traditional Kenworth wood-grain with gold bezel gauges which adds a finishing touch of prestige, I believe.”

And as the final rays of the day’s sun disappeared over the horizon Wayne parked the T9 for the night but not before he promised to take us for another run it with three trailers the next day. “And if we get time I’ll show you a really classic Kenworth too,” Wayne smiled… But that’s another story. 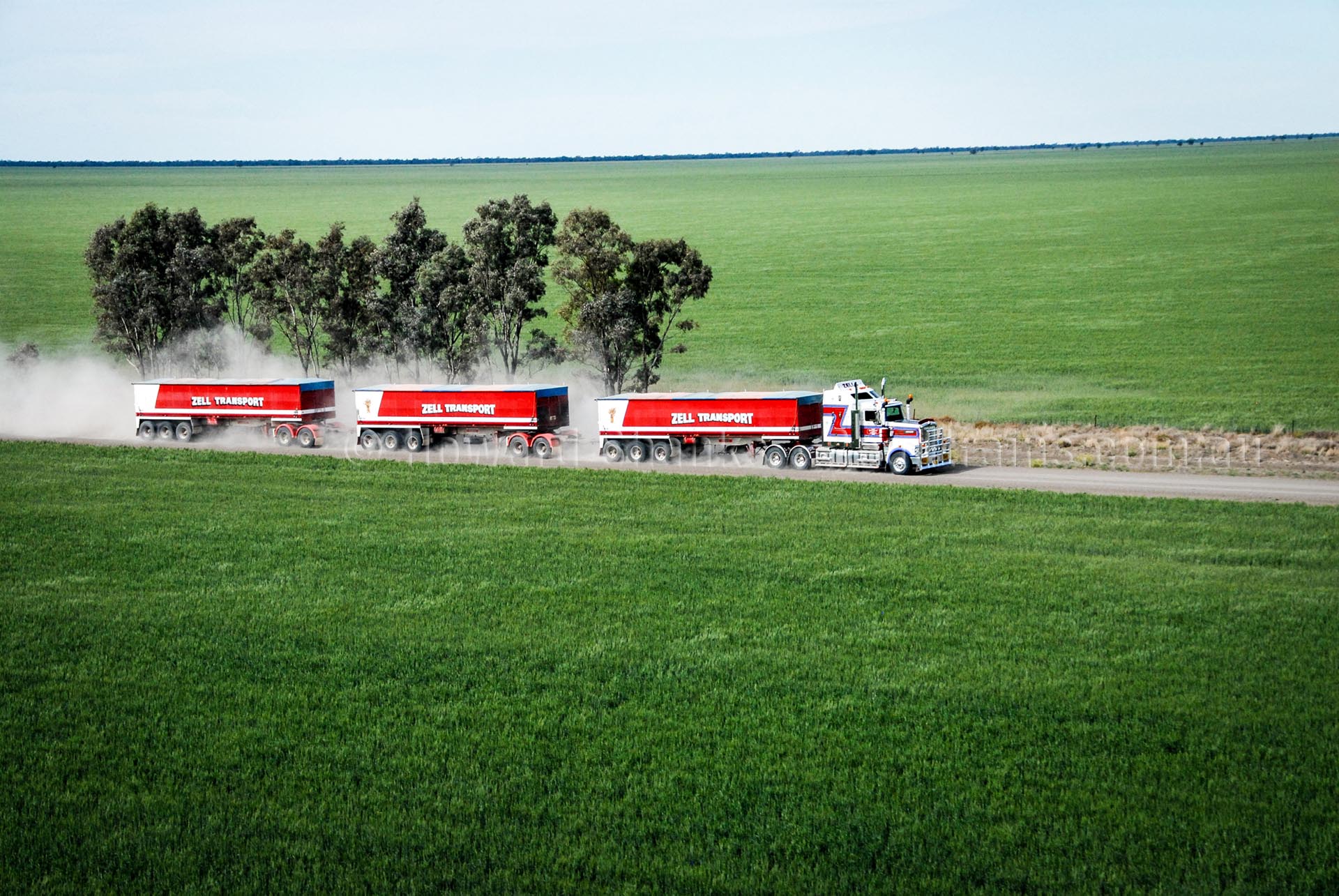