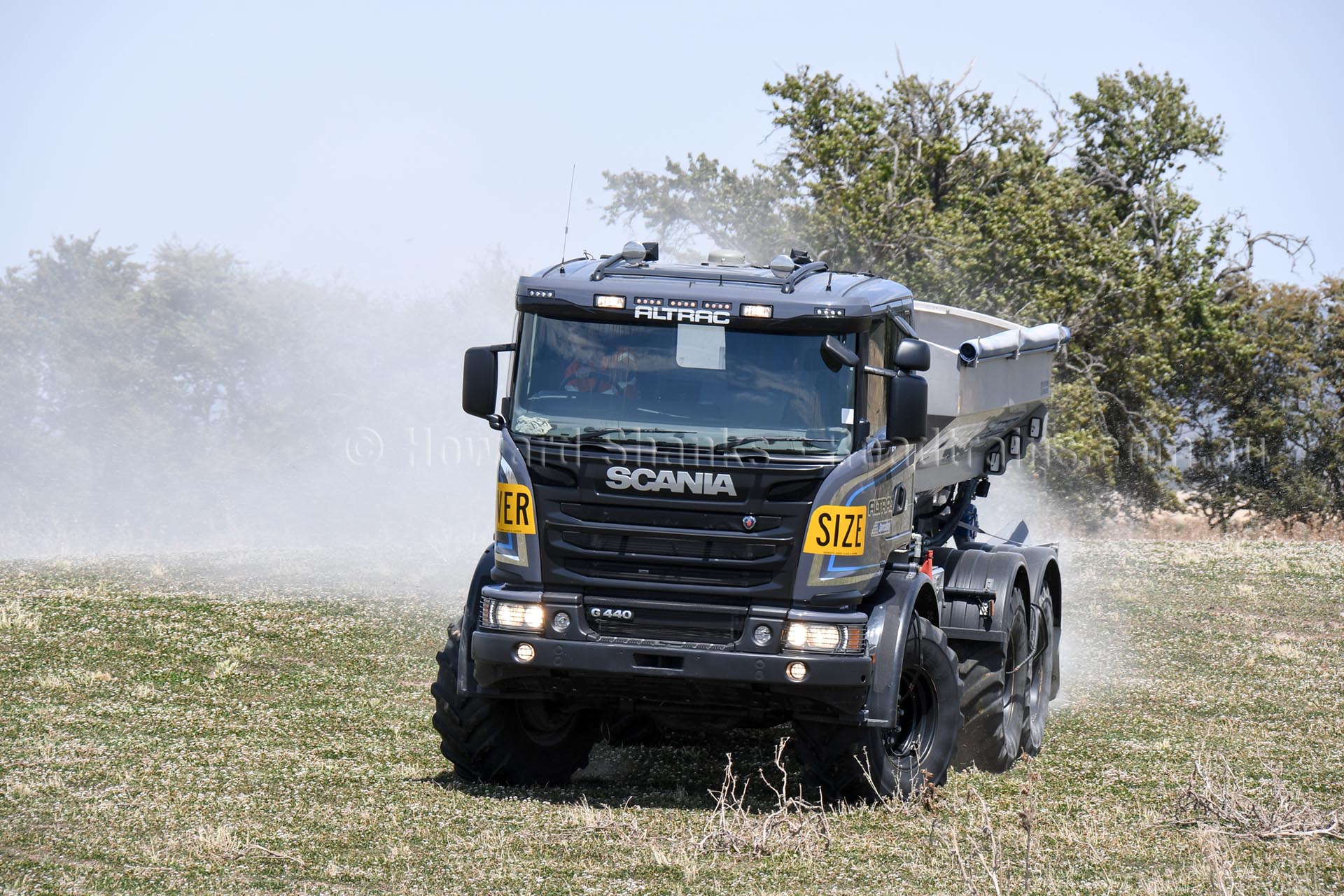 It’s somewhat uncanny that for all the technology coming into trucking today, the trucks themselves still lead hard lives and need to be built tough. And, no one knows that more than, Tim Murfett, manager of Launceston based Altrac Spreading, after all, his trucks have it harder than most specialised machines destined for heavy-haul and other severe-service applications.

Scania’s new XT construction models are a perfect example of the trend to blend cutting edge tech with tough. It’s a model range that leverages all of Scania’s latest technologies, such as advanced telematics with an incredibly robust frame, high-horsepower diesel engines, and ground gripping all-wheel drive axle options.

It is that intricate blend of brain and brawn in the truck that first attracted Tim to Scania.

“Today we need a truck that is smart,” Tim Murfett, began. “Because the new generation of farmers who engage our services want accurate data on the amount of product we spread and where it was spread. At the other end of the scale we also need trucks that are reliable and robust enough to endure the rugged chassis twisting conditions we have in Northern Tasmania.” 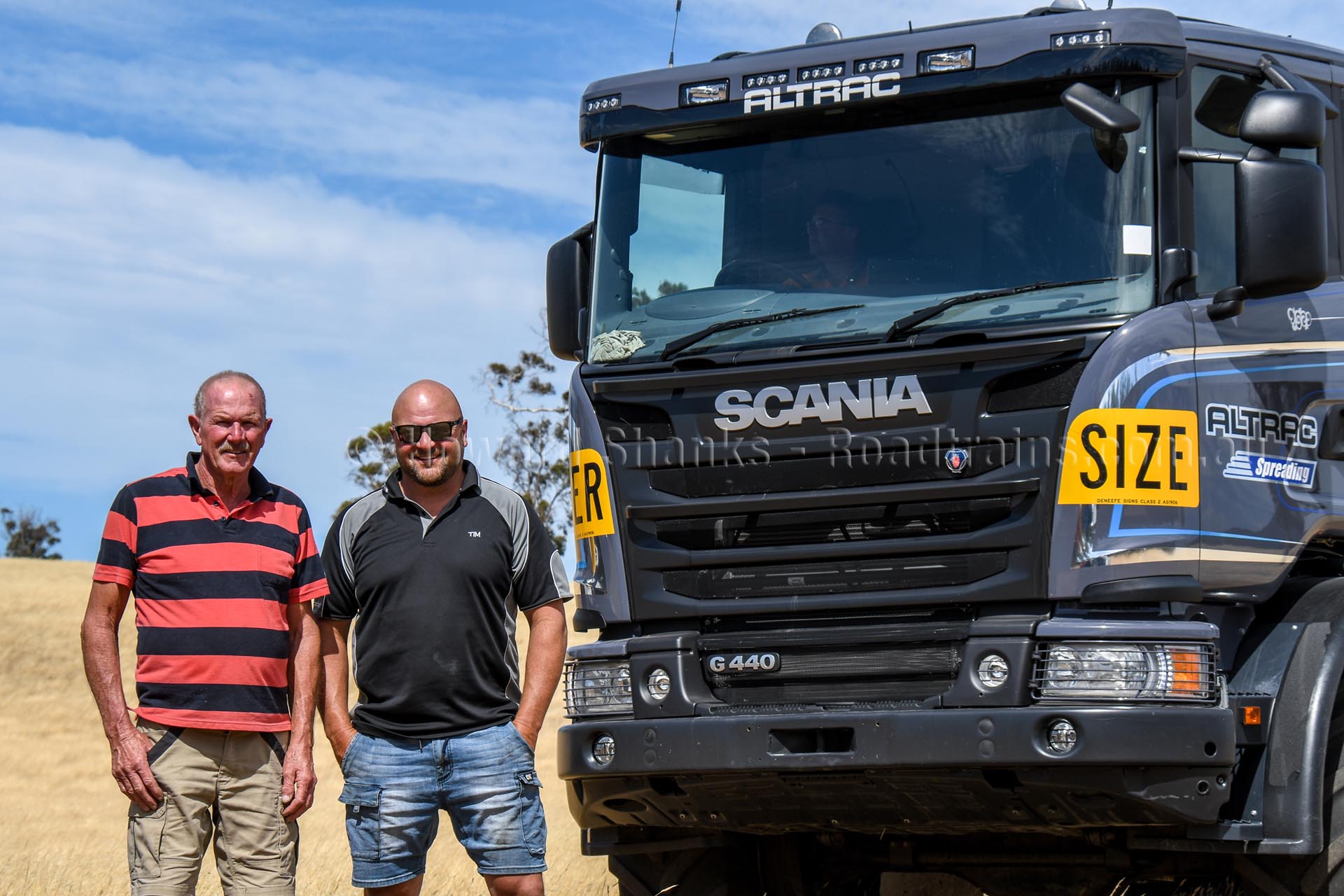 “When my father in-law Dirk Van-Namen took over Altrac Spreading back in 2012 the technology in spreading equipment was considerably limited compared to the results we can deliver today,” Tim explained. “I was new to the agriculture industry but came from a mechanical and transport background. For the first 12 months, I juggled truck scheduling as well as driving one of our spreading trucks before taking over the Manager’s position permanently. Mind you, both Dirk and I both jump into a spreader when we get the chance.”

“I did a lot of logging back in my early days,” Dirk said. “We even had a few Scania’s on the logs back then and they were good trucks,” he added.

Today Altrac Spreading has diversified their services from spreading and transport to include crop and pasture sowing as well as filling in centre pivot irrigator ruts.

Along their expansion route, the path to increase productivity is one well-trodden by Tim and Dirk, chasing efficiencies where ever they can. It’s a path that led them to their first 6×6 Scania, a G440 and subsequently to the P450 XT. 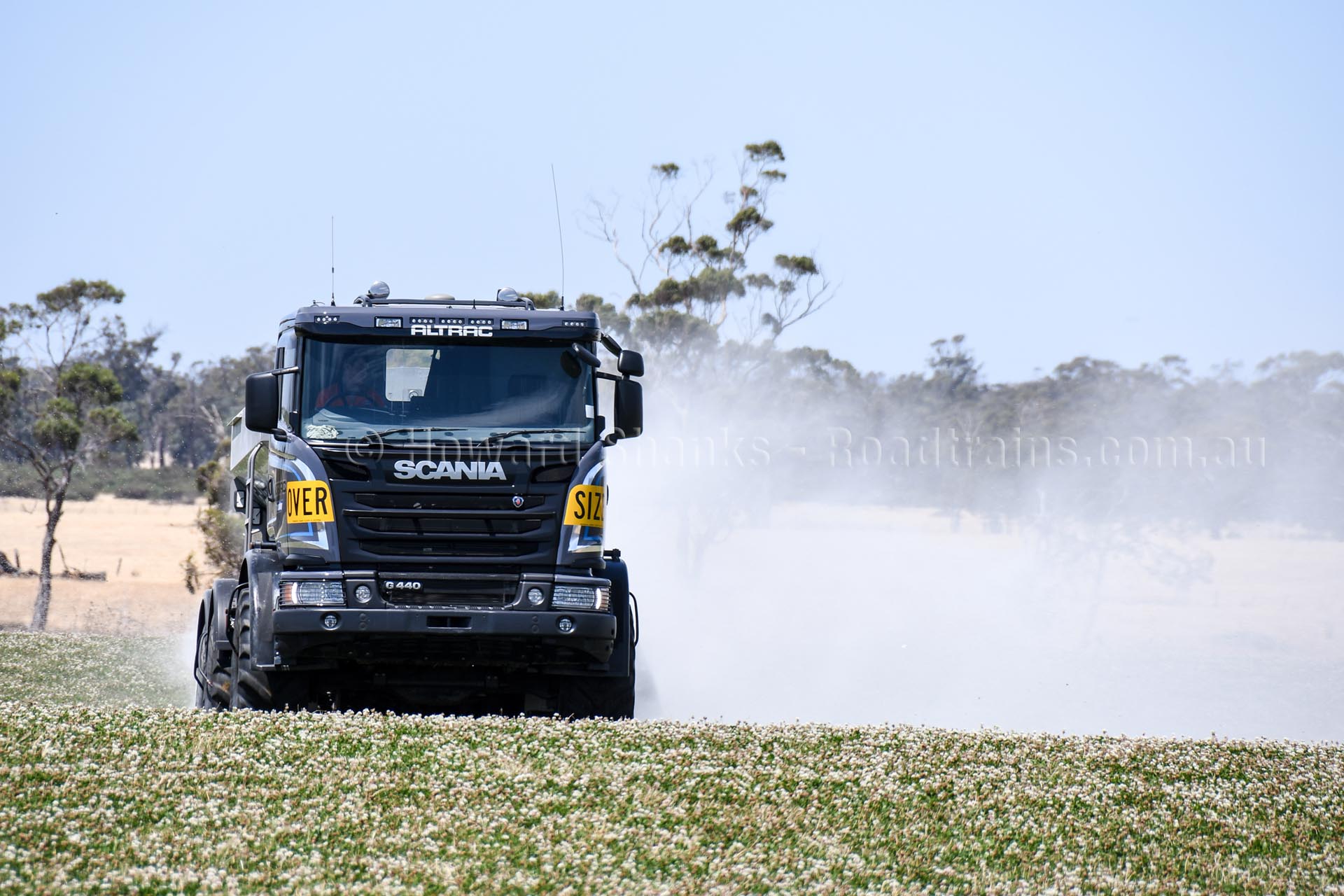 “At the time, we were searching for a vehicle that could carry more product to give us efficiencies through economies of scale along with far more reliability than we getting out of some of the other marques in our fleet. Frankly some of them weren’t man enough for the job,” he explained. “For instance, when we are on some of the larger farms there can be a five or six-kilometre lead from the stock pile to the paddock which means that there can be a 20-minute loss of production from the time the truck leaves paddock, travels to the stock pile to load and returns. That’s one reason the 6×6 Scania appealed to us.”

“The other reason is the Scania is a very intuitive truck with a host of technical features that can link in with our unique body which enable us more accuracy when spreading,” Tim continued. “Most of the new generation of farmers have college education and really know their production costs and monitor their soils to enhance crop growth to maximise their yields, its what’s known today as precision agriculture.”

Simply put, precision agriculture is a farm management approach largely based on technology and data collection, where farmers use anything from drones, GPS, sensors to soil sampling and variable rate applications to make agribusiness more accurate. 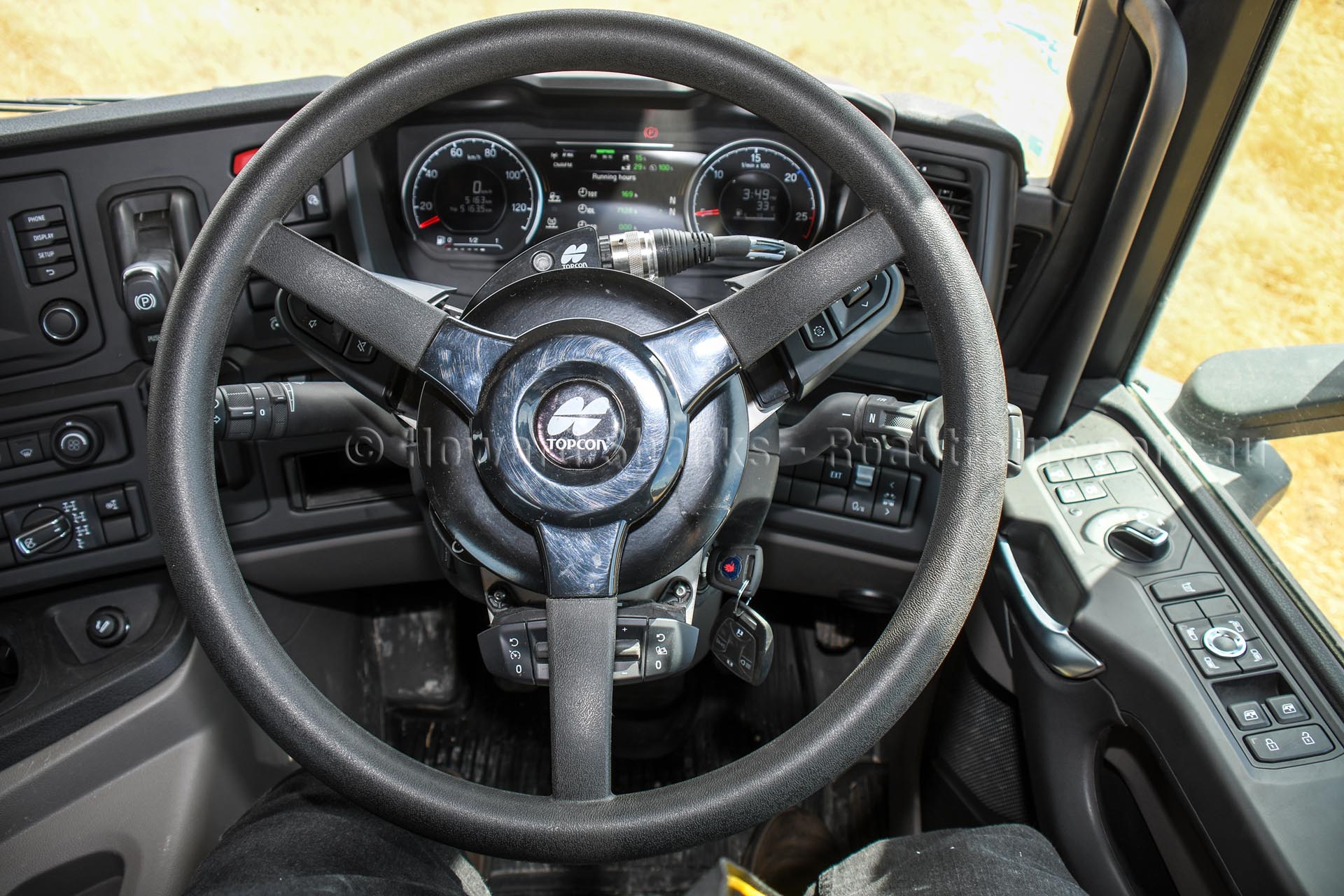 “Today we work closely with our clients and based on their requirement we can plot the path for spreading in the paddock and precisely measure and vary the amount of product we spread then at the completion of the spread provide the farmer with an accurate record of the amount of product spread in that paddock.”

“There is significant cost saving for the customer straight away,” Tim revealed. “Now we can guarantee to minimise overlap passes which means no wasted fertiliser or seed and importantly waste fuel and time. With the variable rate application, the machine can dispense more product in areas of the paddock that require dense coverage and less where lighter coverage is required, this provides the maximum benefit to the soil.”

However, Tim concedes that when he first looked at the 6×6 Scania it certainly appeared to be a premium product on paper, a fact that was quickly confirmed when the quote for the vehicle came in $20K higher than his last spreader acquisition.

“Then there was a price jump from the G440 to the new P450 XT,” Tim revealed. “At first it glance is might seem somewhat hard to quantify such a significant gap in the price from one vehicle to the other. However, for us we really had to look at what we are getting in that package and not only consider how the new technology will benefit our operation but also how the efficiencies of the new machine will reduce costs and weigh up the integrity of the product along with its back up support to ensure we can provide the level of service we are promising our customers,” Tim explained.

“Importantly we had to ensure that with the additional price increase in equipment came with a significant productivity gain,” Tim explained. “If our costs rose to high because of the investment in equipment and we’re forced to pass this on, then farmers would start looking at purchasing tow-behind spreaders for their tractors to do their own spreading. It’s that simple, because they are always looking at ways to reduce their costs too. Thankfully when we started looking into the Scania trucks in-depth it quickly became apparent they would deliver the efficiencies we were looking for.” 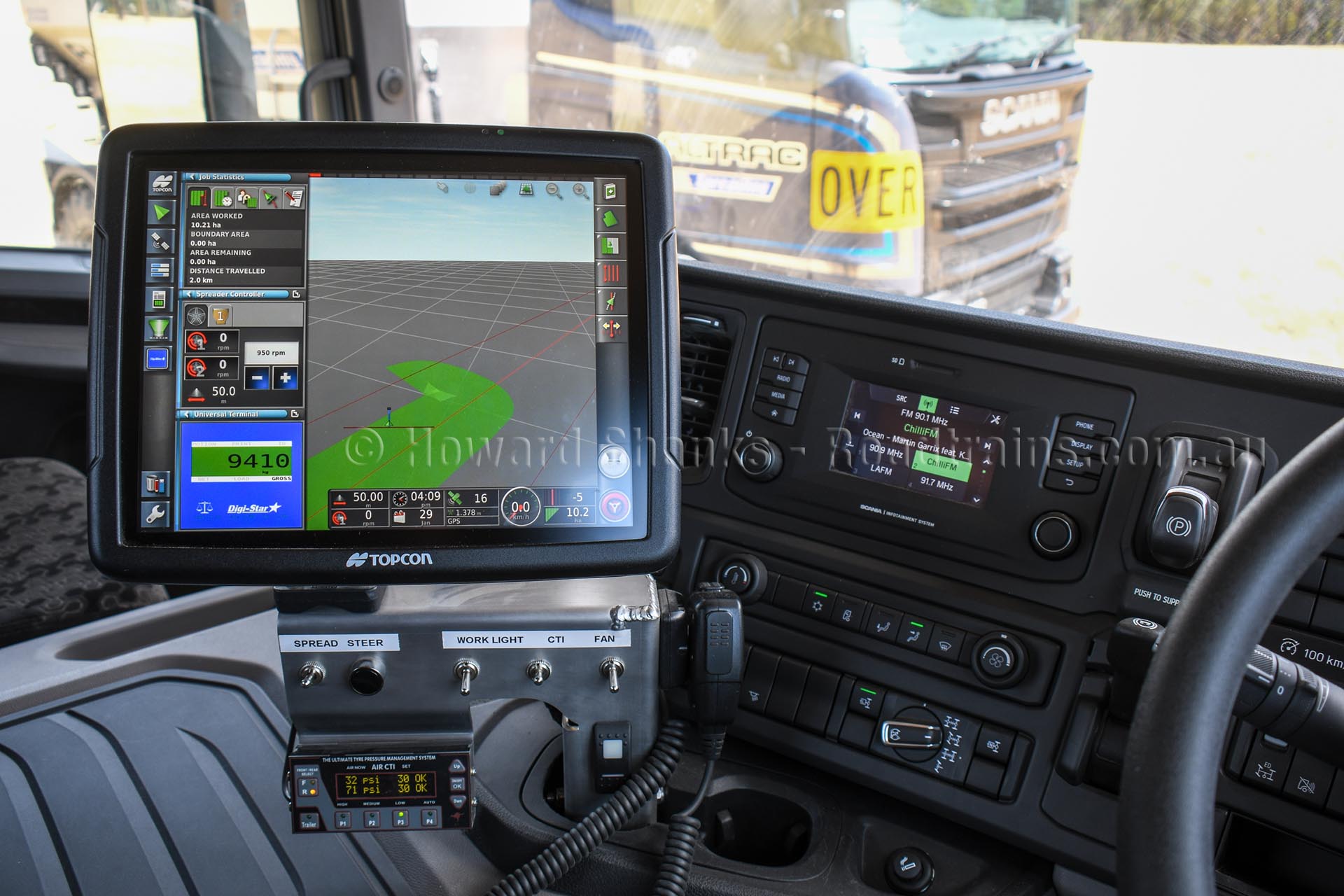 Tim conceded that when he started crunching the numbers he couldn’t afford not to have the new Scania 6×6. The legal road going payload increase from the smaller MAN 4×4 to the Scania 6×6 went from 4.5 tonne to 7 tonne (55.56 per cent) and in the paddocks even higher. The spread pattern of the new larger Southern Spreaders bin went from 34 meters to 50 meters (47 per cent). Because the Scania 6×6 carried far more product in the field, the number of trips that Scania trucks have to make back to the stock pile is reduced by 37.5 per cent.

“When you weigh up the productivity and economic gains we were getting for a small 8.7 per cent increase in the purchase price we just had to have the Scania,” Tim said. “In fact, when I first saw it in the afternoon, I went back to my motel room and did the sums, then rang Dirk and we both agreed that the Scania 6×6 was the way of the future. So, Dirk rang and ordered it that night.”

Since the first 6×6 went into service in mid 2018, it quickly became apparent that Dirk and Tim had made the right choice. The larger 440 horsepower truck was carrying more fertilizer as well as towing a tag trailer with the loader and burning the same amount to a tad more fuel than the smaller 4×4.

“Like all transport operations fuel burn is one of the biggest costs,” Tim explained. “It did worry me how the Scania was going to go when it came to fuel considering it had the larger engine and more power. But once it started working, the extra power actually proved to be a greater asset because it can get more product to the job site quicker because it can climb the hills a reasonable pace.” 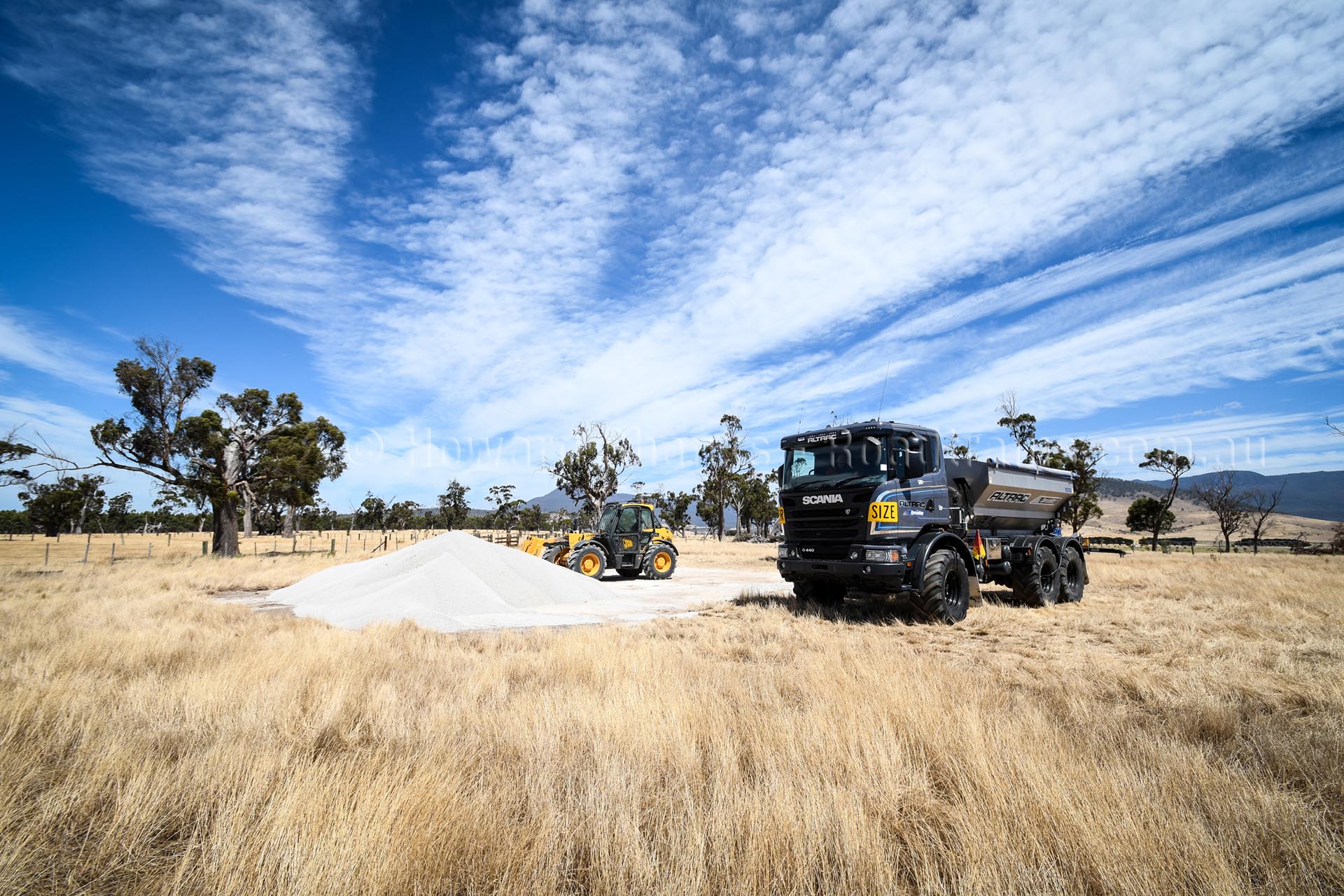 “One thing we’ve had on all our spreaders, is the AIR-CTI central tyre inflation system which enables us to raise and lower the tyre pressure from inside the cabin on fly. This combined with the Michelin 495/70 R24 XM47 floatation tyres is important when spreading in paddocks as soil compaction is big concern for the famers from the weight of our vehicles on their crops. By lowering the tyre pressure in the paddocks, it increases the surface area of the tyre’s footprint over the ground and this reduces the kgs/cm2 load on the ground. The added advantage is the greater the tyre footprint the more traction is improved, much the same as 4×4 enthusiasts lower their tyres when they’re on the sand.”

“During a particularly wet week back in spring, the Scania 6×6 was spreading in a large paddock down Fingal way, it had been going in and out of the paddock several times barely making a mark in the grass where it had been.” Tim recalled. “One of our 4×4 that was spreading nearby had some product left over and drove into that same paddock and went about 5 meters and sunk down to the axles. We couldn’t believe how easy the bigger 6×6 was working in such wet boggy conditions and barely leaving any evidence it was there.”

Take one look at the steering wheel in these Scania trucks and it quickly apparent that they’re a little more sophisticated than standard. They’ve been equipped with the Topcon electric self-steering that enables the truck to steer itself in the paddock to pre-plotted courses to ensure the product spread is directed where it has been programed. The driver still can override the system at any time simply by turning the wheel to avoid an object in the path. “It’s all part of our precision agriculture program,” Tim added.

The trucks still retain all their original functions for the on-highway side of the operation.

The latest Scania 450 XT is powered by Scania’s DC13 engine, coupled to the GRS905R 14-speed direct transmission with opticruise shift. The power is feed into the GT900 transfer case where it can be directed to the forward and rear axles according to the conditions. This vehicle features the R4100 Retarder which does an excellent job in the hilly country around Tasmania.

When asked how happy he was with the two Scania 6×6 spreader trucks, Tim answered, we’re that impressed Scania and they’re doing such a great job we’ve actually ordered two more 4×4 which will arrive in the next month or so and scheduled another 6×6 in time for next season. 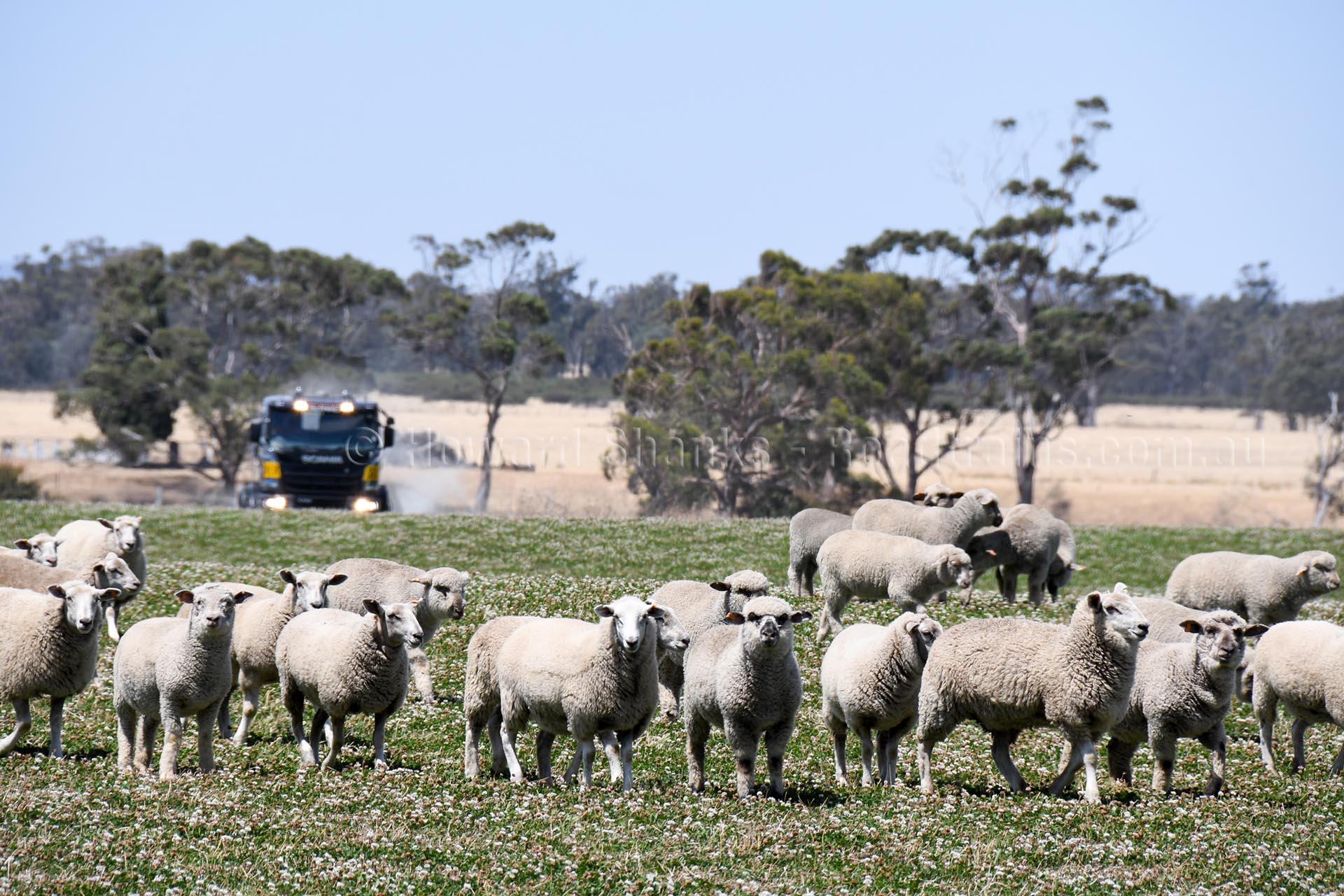