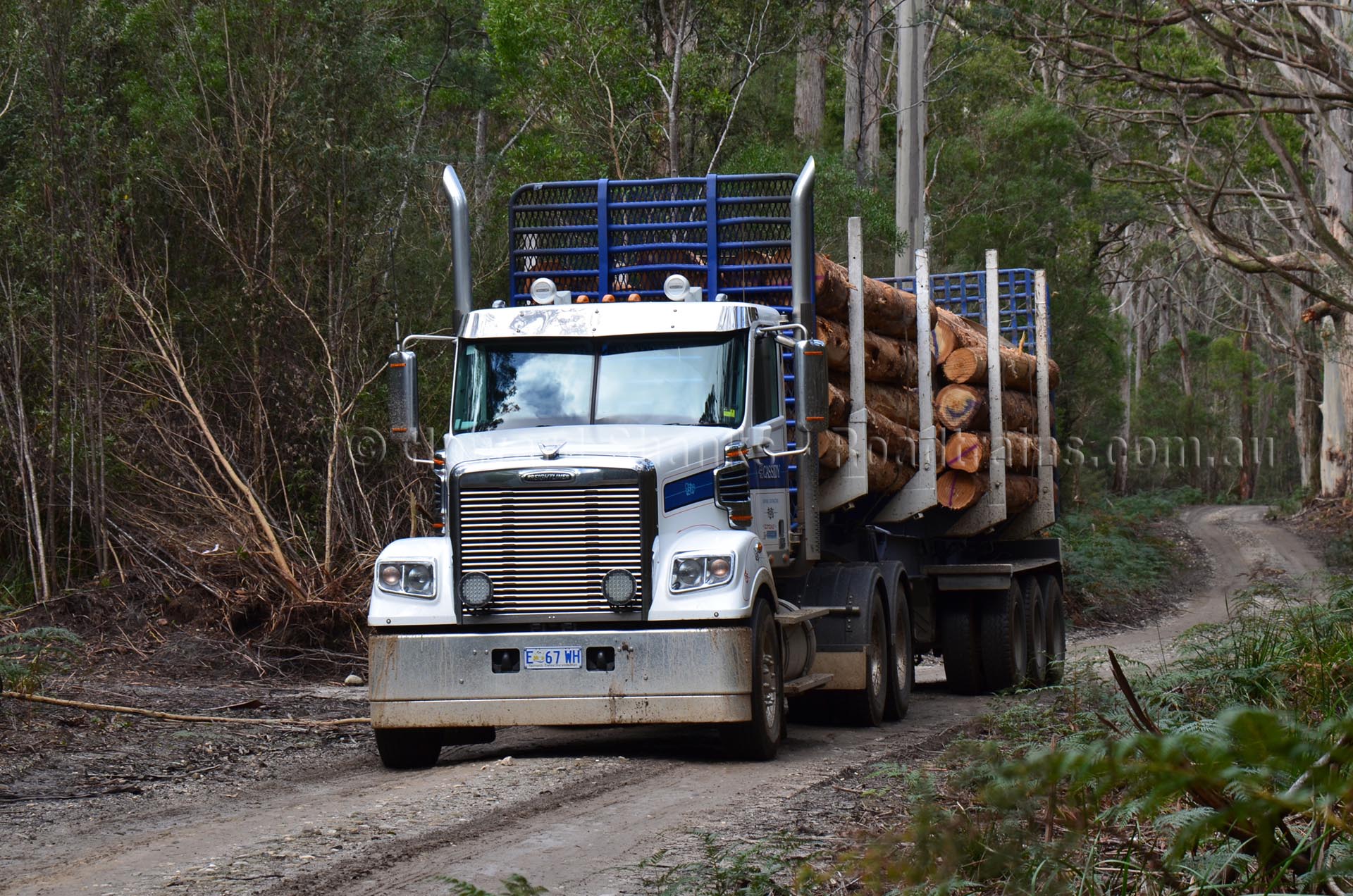 The stunning looks of this Freightliner Coronado FL114 are not the only feature impressing driver Tim Knight as Howard Shanks discovered on a run into the rugged tall timber country of North East Tasmania.

Sure enough, right on time, a silhouette of the Coronado FL114 appeared on top of the hill. The day before Tim Knight suggested rendezvousing at “Stoney’s” on George Street Scottsdale at midday, a small takeaway store popular with most of the truck drivers in Northeast Tasmania.

A few moments later, Tim was steadily shifting up through the gears on the way out of town. His run along the Tasman Highway takes him through some of the most scenic countryside in the state. In fact this road is part of the spectacular east coast touring route and forms part of the famed Targa Tasmania racing track. It’s sweeping bends and tight twist, undulations and hill climbs make it a prized route for motorcycle riders and sports car enthusiasts. It is a driver’s paradise. 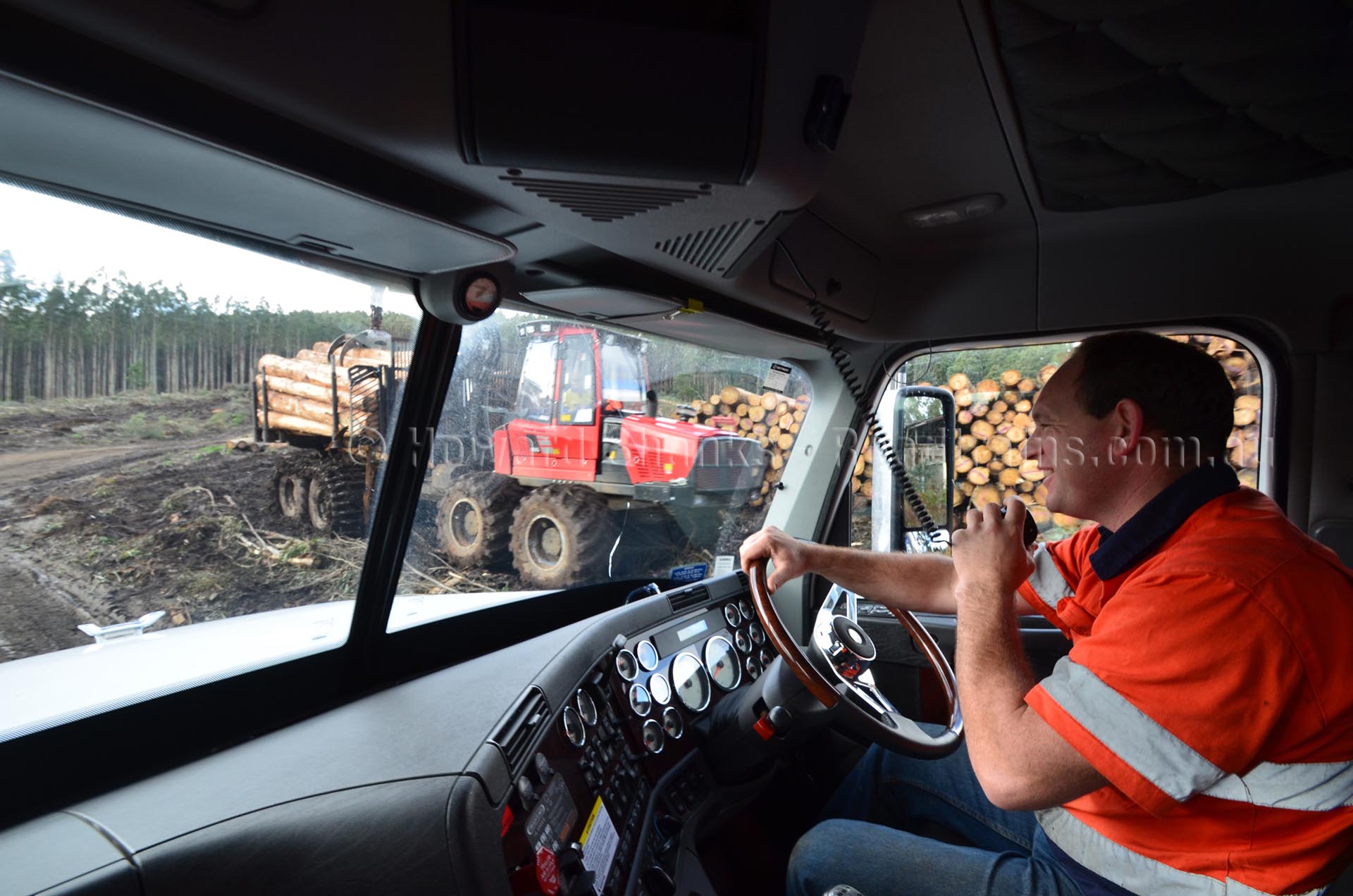 For Tim however, it’s just all part of the day’s job, but its an enjoyable part nonetheless. Consequently when it came time to ask how the new Freightliner Coronado performs, Tim can answer with extensive experience and conviction.

Performance wise, Tim admits he has no complaints and cites the Detroit DD15 as a tenacious engine with strong hill climbing torque. He did confess that he had some apprehension about the Coronado’s performance characteristics when he learnt it was Detroit powered.

“You’d understand that working in the bush I’ve had a long involvement with Caterpillar products and consequently most of the trucks we had previously were Cat powered”, Tim revealed. “I was use to their raw power and reliability, hence my hesitation when it came to the new Detroit. Nevertheless, most people I spoke to indicated the new DD15 engine was delivering good economy that is comparable to with the new Cummins E5 and better than the Cat powered truck I was in at the time. Meantime its reliability was also receiving favorable reports as well which helped instill confidence in the decision to go with the Coronado.”

Owner Clarry Cassidy, reiterated Tim’s concerns but added he was inspired by the Coronado’s light tare weight and looking to improve his margin with payload and economy gains. 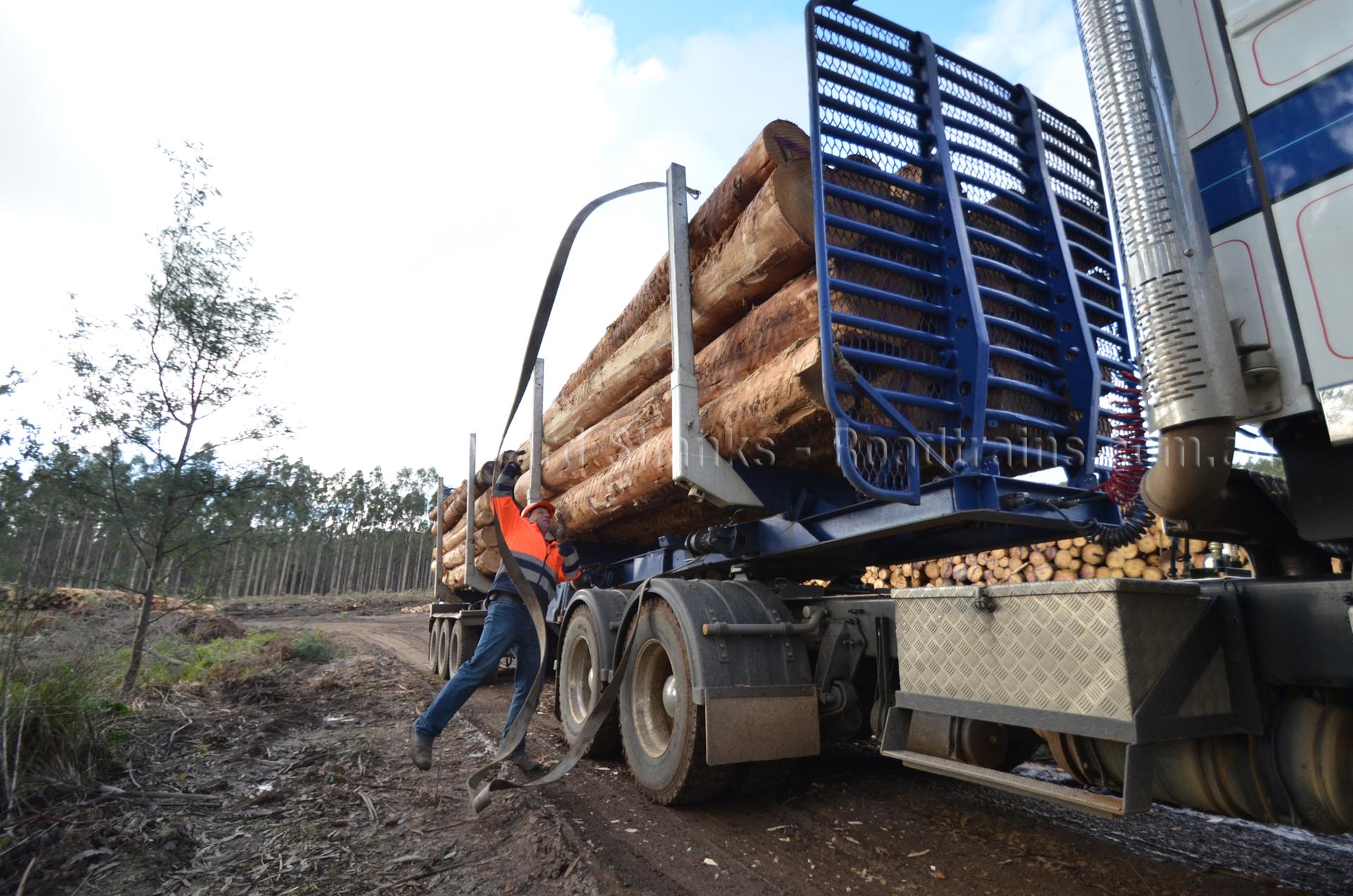 The heart of the DD15 is the turbo-compound system combined with Detroit’s unique amplified common rail assembly that is sometimes referred to as a hybrid injection layout, which in simple terms uses unit injection to enhance the high fuel pressure of the common rail design at low speeds. This amplified system is claimed to dispense an astonishing 90 percent peak torque within 1.5 seconds and subsequently deliver remarkable engine response. It’s a claim that Tim certainly endorses with confidence.

A decent engine brake is critical for any logging operation and the fully integrated Jakobs engine brake is highly effective and amazingly quiet. Tim agrees it fits the bill nicely.

“The engine is just so much stronger and smoother than anything I’ve driven before,” Tim thoughtfully mused. Mind you the fuel economy has been one thing that is really starting to impress us. It’s relatively new with only 40,000 km and already we are seeing an improvement in economy of 0.3-0.5 litre/km over the truck it replaced on the same run. The economy appears to be getting better as it beds in too.” 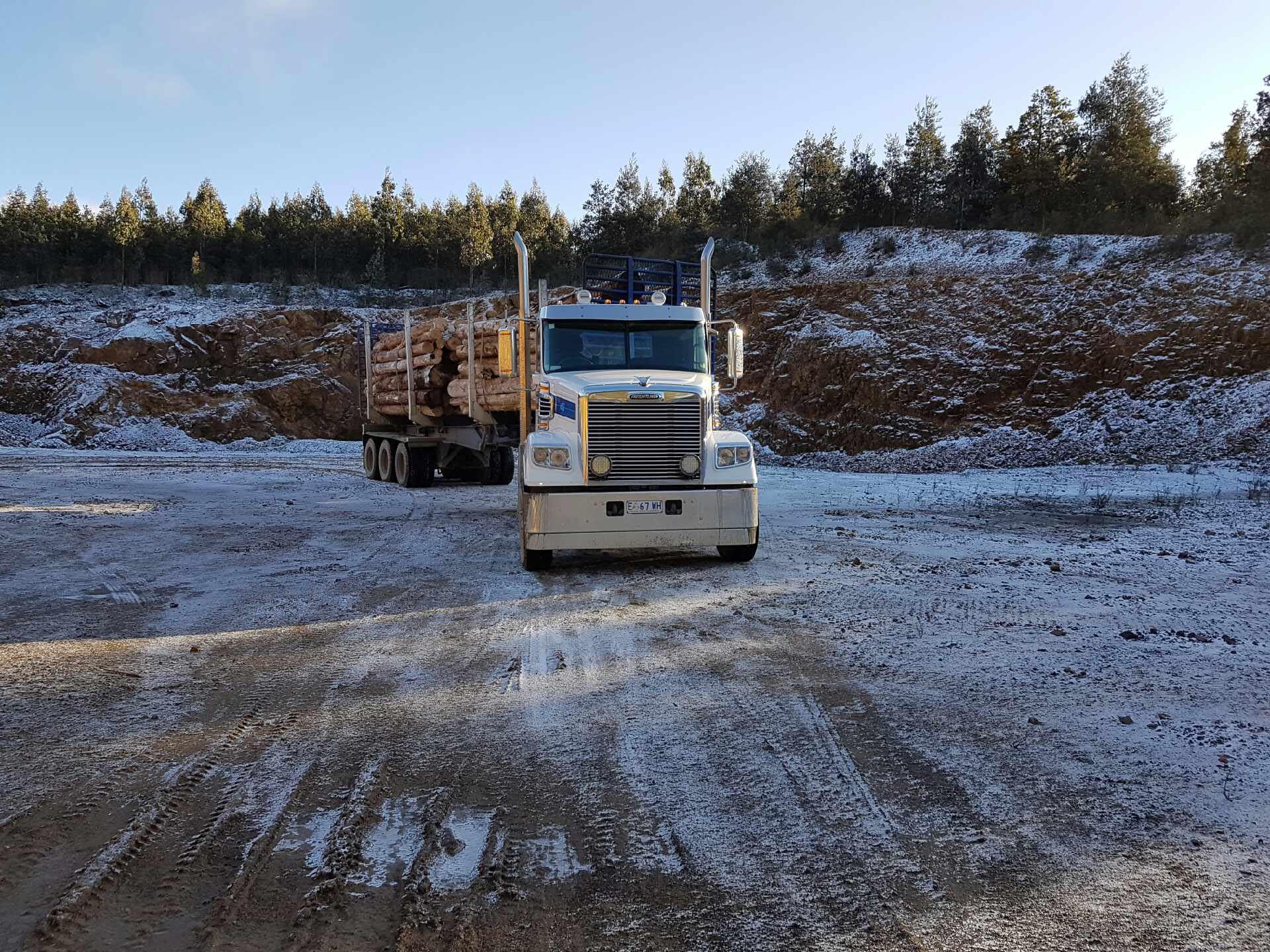 Tim was well into the trip, guiding the Coronado around some tight bends and up a few steep climbs, comparable with climbs of Cunningham’s Gap out of Warwick in Queensland or Tap Hill between Gilgandra and Coonabarabran in NSW, and the Detroit under the hood was making light work of it with the empty trailer. On the return loaded leg the Detroit’s tenacious appetite only saw Tim drop a few gears to crest the steep climb over the ‘Billy Cock’ hill before demonstrating the Jakobs engine brake’s exceptional performance down the other side.

Inside the cabin, it was noticeably quiet, and having a conversation was effortless. The ride of the Coronado was another area that really impresses. The roads in Tasmania are somewhat narrower and rougher than roads on the mainland yet the ride inside the cabin was smooth.

“The Coronado is a really sure footed truck with exceptional road manners,” Tim explained. “When you stick this into a corner it sits up nice, there is no diving or cabin roll that you experience in other brands. It is very relaxing to drive,” he adds. 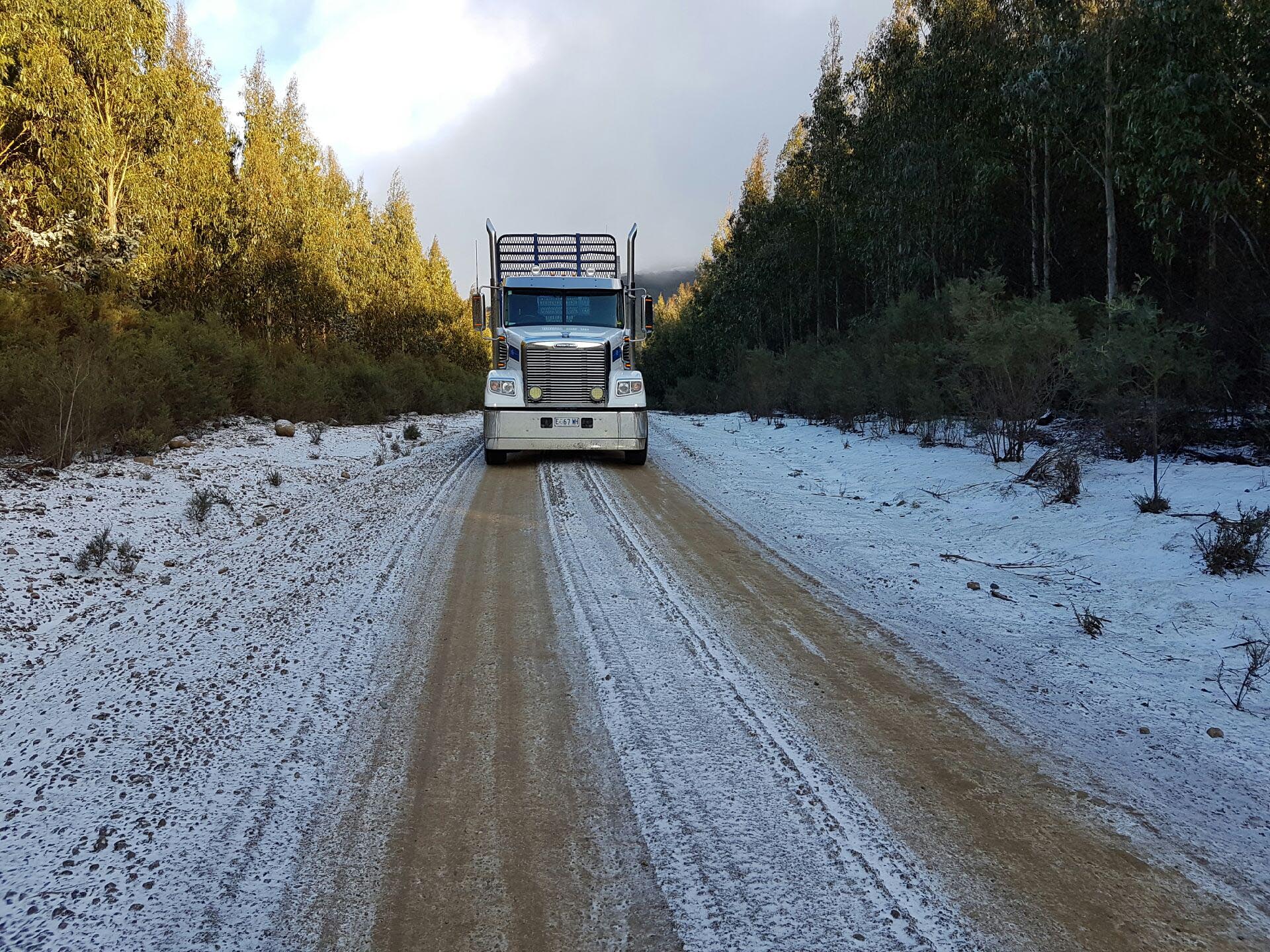 Freightliner claim that the Air-Liner suspension system was designed to virtually eliminate any servicing or maintenance and the use of elastomer bushings negates the need for regular lubrication and results in a greatly extended life cycle.

Freightliner’s Air-Liner suspension achieves a relatively constant spring rate by using a premium rotary valve that ensures correct height control. That rotary valve replaces traditional rubber-seat valves that deteriorate with age and alter spring rate and driveline angle, both of which cause a reduction in driveline life.

The Air-Liner 46K unit fitted on Cassidy’s Freightliner Coronado FL114 has a ground rating of 18,000kg and a GCM up to 90 tonnes at a five percent grade.

As soon as Tim hits the muddy dirt track leading up to the bush block, he eases off the throttle and engages the power-divider lock. “It’s a real advantage that the Coronado comes standard with cross locks as well,” Tim adds. “As you can imaging they get a bit of use this time of the year up here in these conditions.”

Outside the mercury in the thermometer was struggling to make it to one degree; inside the cabin of the Coronado it was a pleasant 20 degrees Celsius. “Lucky you didn’t come yesterday,” Tim smiled. “It was even colder and the rain blew in sideways, I’m sure it originated in Antarctica,” he joked. 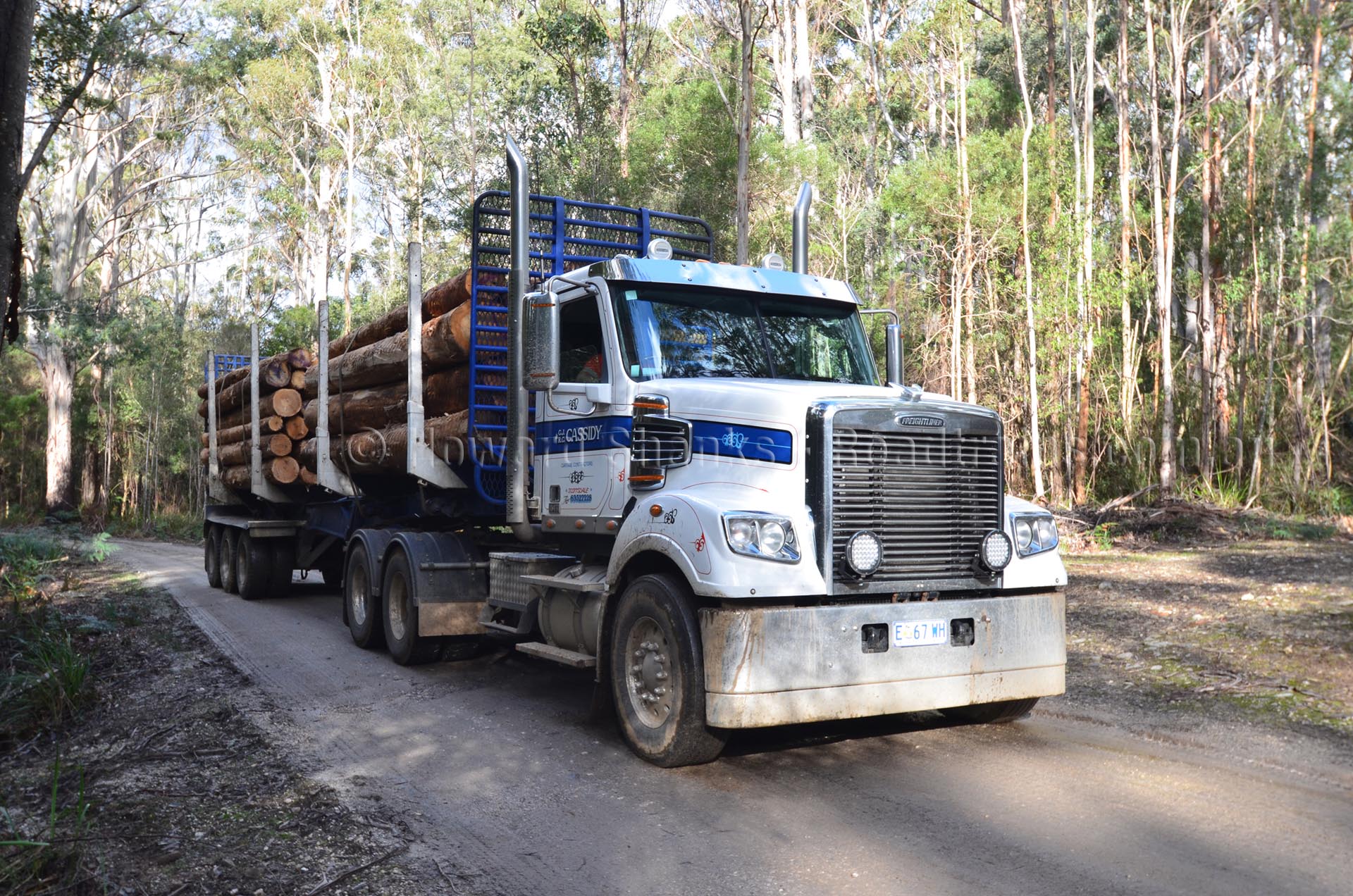 Tim agrees that Freightliner’s choice to standardise the dash and switch layout across their range is a huge advantage for fleet operators in terms of savings on driver training and safety gains through standardisation.

The burl woodgrain dash is well appointed with a full compliment of gauges finished with classic gold bezels and white background. Meantime Tim says the Freightliner Driver Message Centre in the middle of the dash can display a host of real time information as well as vehicle alerts. “The system is relatively easy to use and navigate around,” he adds, as he pushes a button to reveal the current fuel usage, which was 1.98km/l climbing the hill. But more on Freightliner DMC another time.

Rocker switches are located where they should be, and that includes those for headlights, engine brake and cruise control – all on the dash to the right of the leather and simulated wood steering wheel. Freightliner designers stayed with easy-to-use rotary switches to control the HVAC system. While some folks might like the more automotive-style placement of control buttons on the steering wheel’s spokes, for Tim and myself they’re of no convenience because as we agreed you’ve got to drop my eyes from the road to use them so their absence wasn’t missed. 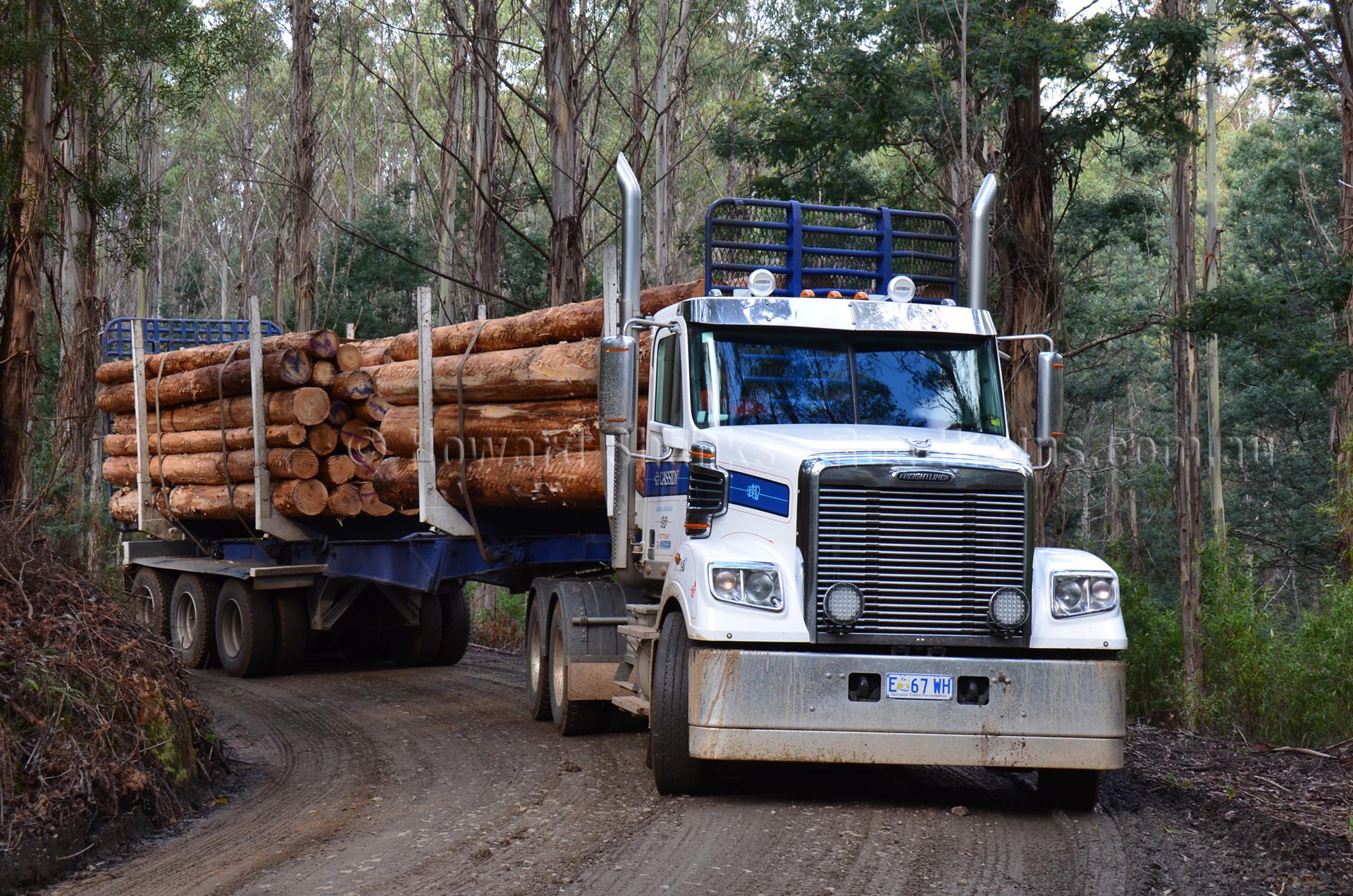 Today Tim was loading peeler logs, destined to make into fine furniture. But he says his loads vary from bush coupe to bush coupe. He explained that these days with modern forest harvesting they achieve between 94 to 97 percent utilization of each tree into the various timber products from furniture timber through to wood chips.

Another advantage of the Freightliner Coronado FL114 with its short nose and light tare weight is it’s ability to fit into a number of different combinations with ease, especially taking advantage of the new high productivity PBS configurations on offer.

“Look its only early days for our Coronado,” Tim concluded. “But if the first few months of its operation are anything to go by then we’ll certainly be looking at more. I really love the look of the Freightliner Coronado FL114 and the fact that it turned out to be an ideal model for this operation is a real bonus. 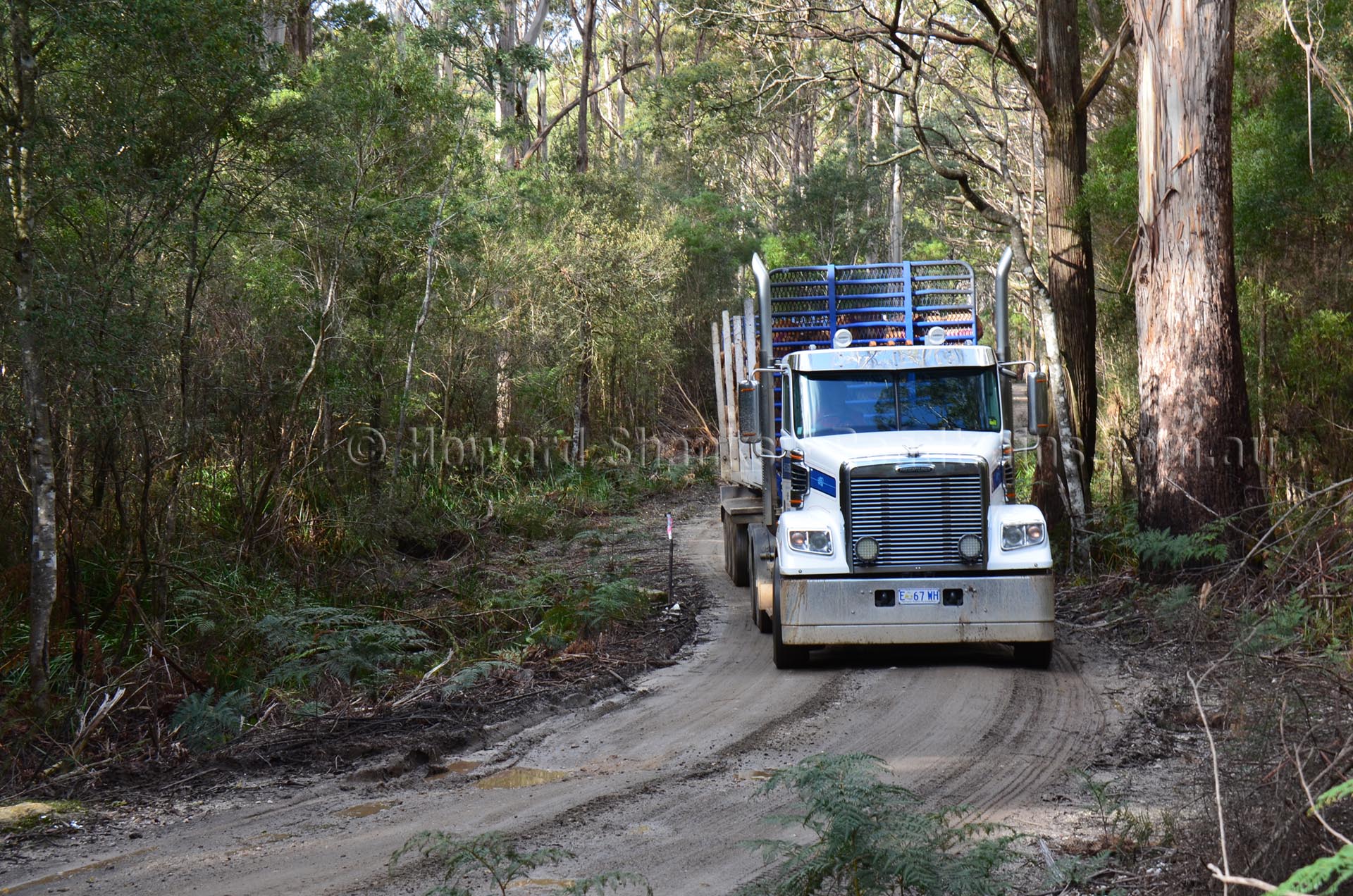