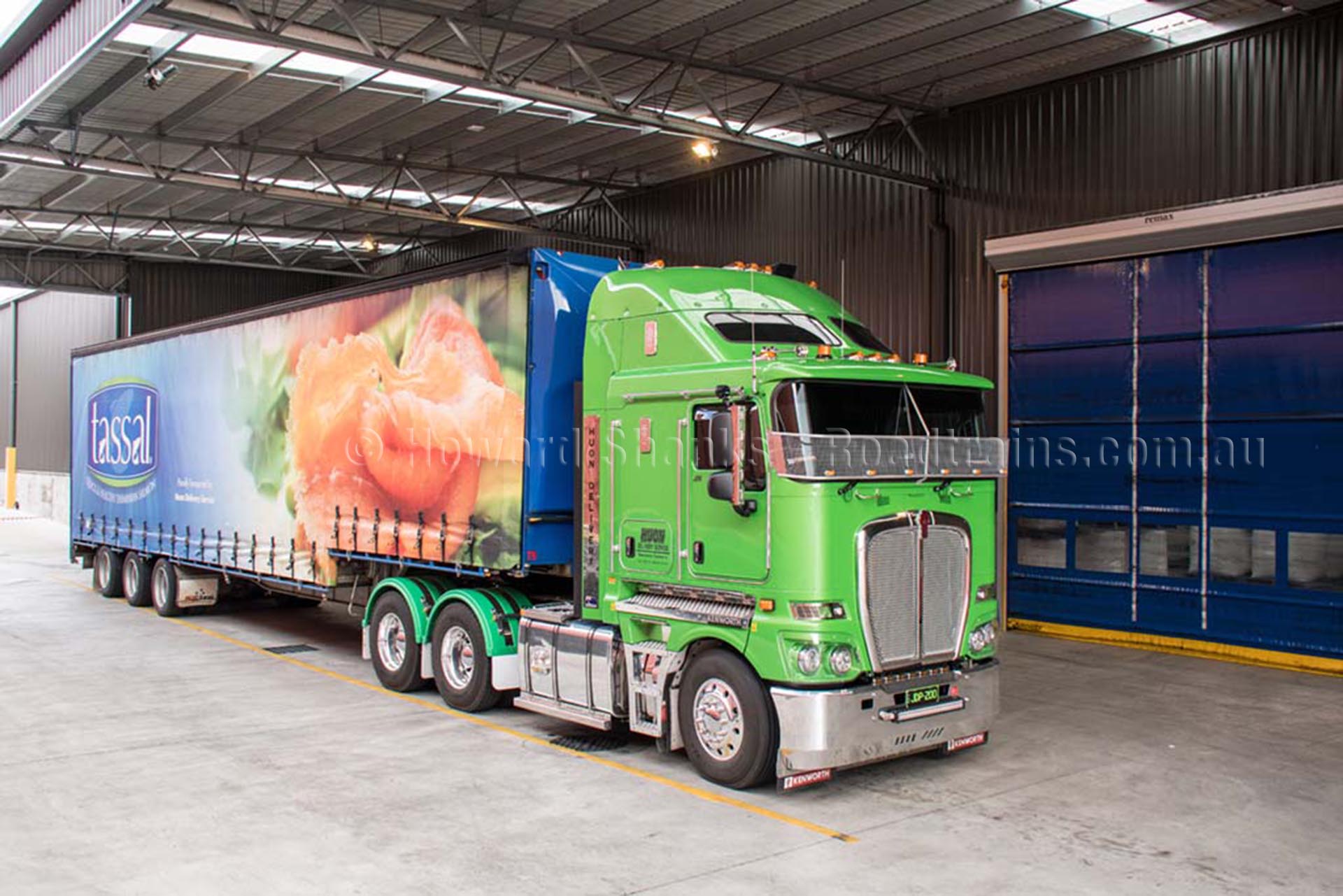 Based in the picturesque town of Geeveston, 62km south of Hobart, Huon Delivery Service, has come a long way, since Johnathon ” Jono” Price’s father’s single axle tray truck was the main form of general freight in and out of the Huon Valley several decades ago. Up until the early eighties, Geeveston had been a timber town for more than a century with the nearby southern forests feeding local sawmills and an APM pulp mill. When the mills closed, so too did the town for the most part. That also meant demand on the Price’s growing transport operation all but came to an abrupt halt. However, with some lateral thinking by the locals to diversify into tourism the town slowly began to spring back into life.

At the same time the feasibility of Tasmanian aquaculture was being trialled in the area and by 1989 Tasmanian salmon was competing with Norwegian suppliers on the Japanese market. Today Tasmanian grown Atlantic salmon is the highest valued commercial fishery‑related industry in the state, with an annual output valued at around $497 million and demand is still growing.

Consequently, the transport task in the Huon valley escalated with the growth of these two industries, so too did the challenges of delivering a reliable freight service. The Prices quickly realised that a quality transport service meant long term logistic contracts for the company. There was no room for cutting corners with cheap inferior equipment was something that was instilled in Jono from an early age.

“Collectively, those attributes ‘RAMS’ effect both the life-cycle costs of our equipment and the ability for us to provide economical and dependable service to our clients,” Jono, explained. 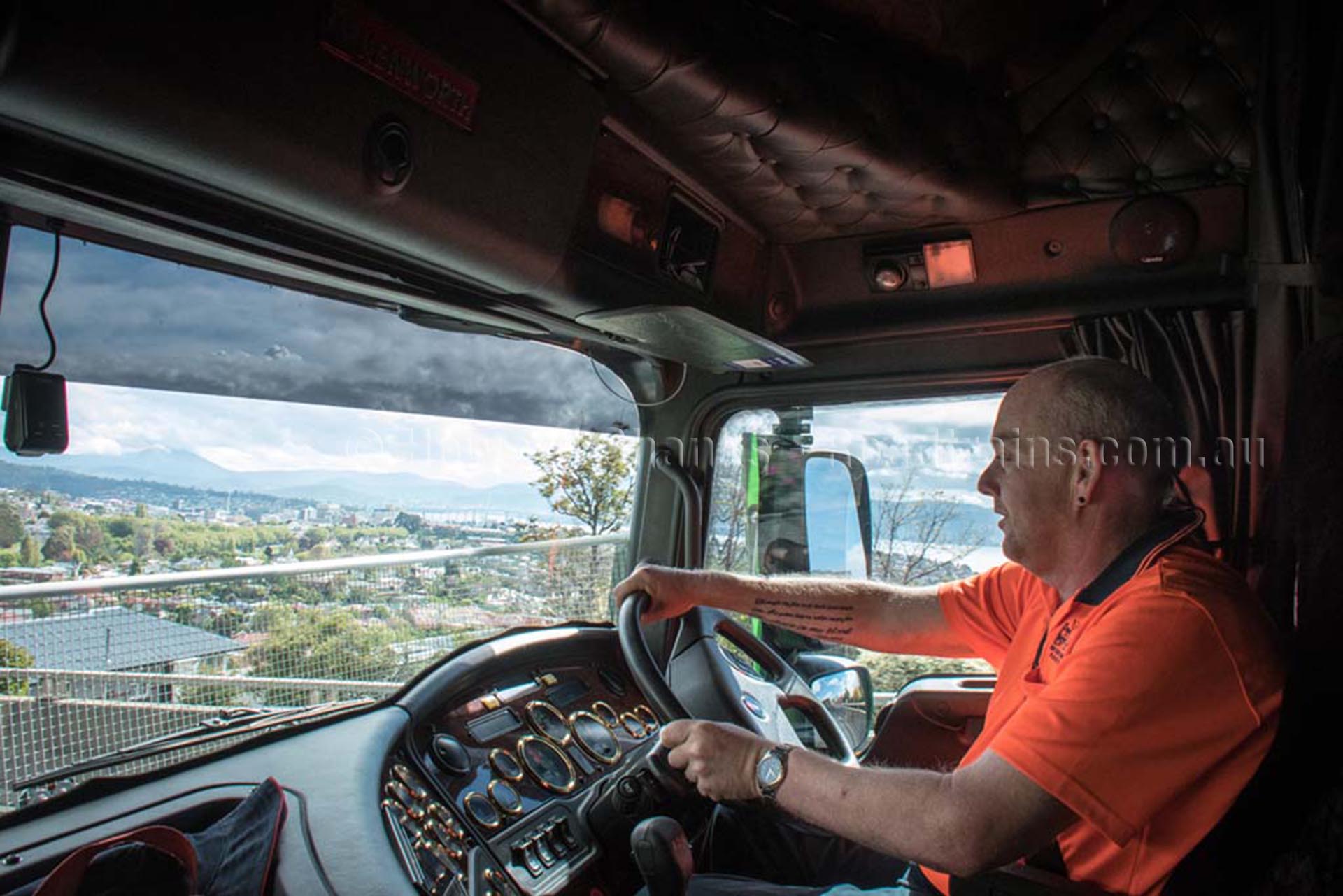 He admits that the ‘maintainability’ component of his RAMS acronym presents some interesting challenges at times because you need to take into account the time required to diagnosis, repair or service, inspect and return a vehicle into service. “There’s a lot more to it than the ‘so-called’ fix price service for parts,” he adds. “But Chris Saltmarsh and the team at CJD Equipment really have a good grasp on what’s required and schedule our services to minimise our downtime.”

In the winter months, not only are the roads icy but essential items like the steps to get in and out of the cabin ice up as well. Jono was impressed with the K200’s optional Active Cabin Entry (ACE), which essentially allows the steps to extend outwards to form a staircase and platform up into the cabin.

“The ability to have this feature greatly improved safety for our drivers with cabin access,” Jono explained.

However, he is quick to add that the standard K200 cab access system with the large free flowing top step that allows the driver to maintain continuous three points of contact at all times by utilising grab rails and steps is far superior to many competitor’s models.

Furthermore, there are LED step lights integrated with the remote control central locking system that activate automatically when the cab is unlocked lighting the steps. 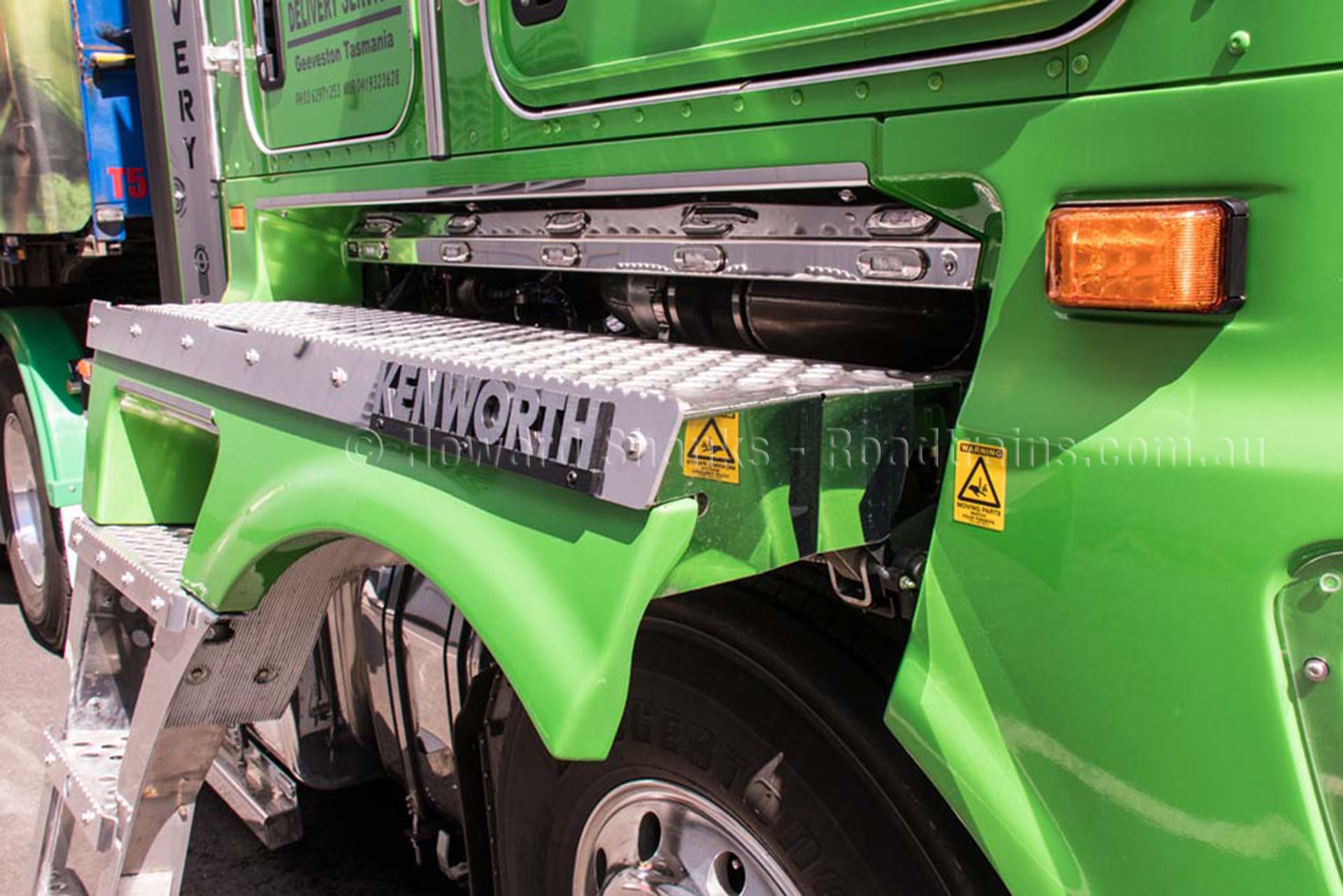 The step features two ultrasonic proximity sensors, one used when the step is extending and the other when it is retracting. Each sensor’s function is slightly different, for instance when the step is extending the outside facing sensor monitors for obstacles and will cease movement if an object is detected in the range. This feature is excellent when the cabin is parked in a fingerstyle loading dock or next to a forklift or another vehicle.

The inward-facing sensor behaves a little different as it only checks for obstacles when the step is fully extended. If it detects an object with the range it will not move, it simply stays in the fully extended position until the obstacle has been removed and the path is clear. Once the path is clear the step will retract to the home position.

There are two switches drivers can use to activate the steps, one located on the dash the and the other at the base of the driver’s seat on the B-Pillar. When entering the cabin, the driver can extend the steps by pressing the “Out” position of the lower B-Pillar mounted switch then pressing the “In” on the dash-mounted switch once he is seated inside the cabin. To exit the cabin the procedure is reversed.

For added safety, the steps with automatically retract if the vehicle starts to move and the driver has forgotten to retract them. 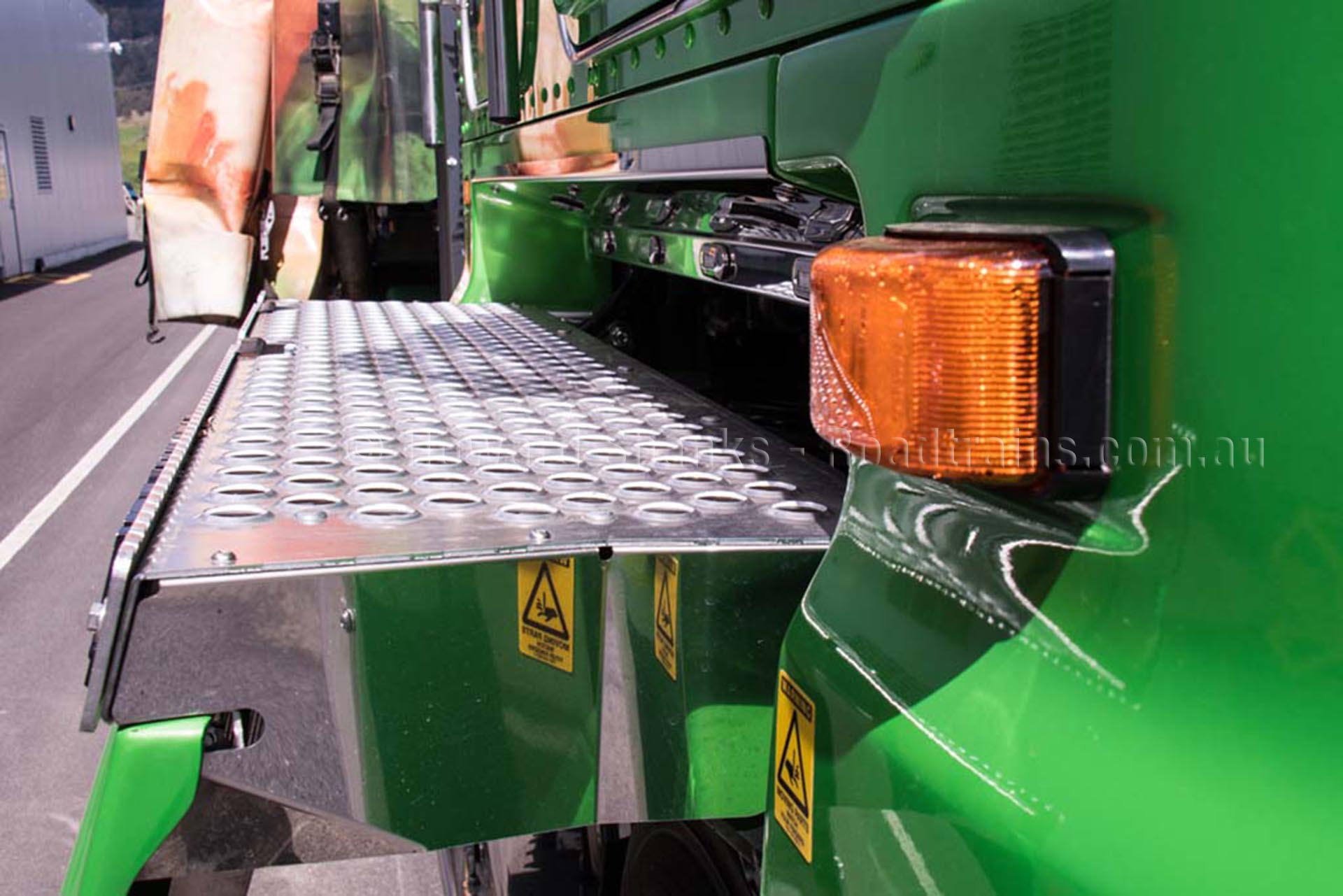 “I’m first to admit that I’m an ‘Old-School’ driver and a few years back I’d have never contemplated driving an automated truck, yet alone purchasing one,” Jono said. “But if you want to be competitive in this business then you have to move with the times and embrace the new technologies coming out to reap the benefits of the lower operating costs. I consider myself a pretty good wheeler, and I can consistently get 2.1-2.2 km/l in our older manual transmission trucks when other operators can barely get 1.8-1.9km/l on the same route. But to achieve an additional 0.2-0.3 km/l like I’m getting with this new K200 constantly (2.4-2.6km/l) then you need that marriage of the engine and transmission smarts working together.”

“When I’m running up the Midland Highway to the north of the state, I’m saving a colossal amount of fuel when the X15 drops its revs and the transmission slips into smart coast mode,” Jono explained. “The Cummins integrated power only delivers enough fuel for the truck to maintain the power requirement based on the load it’s towing. If I’m running empty it shuts down the torque output and only produces what’s required. But when I’m fully loaded and climbing the steep southern outlet, out of Hobart heading south, it’s all hands on deck, and that Cummins has the fuel tap wide open to get those 550 ponies to the back wheels.” 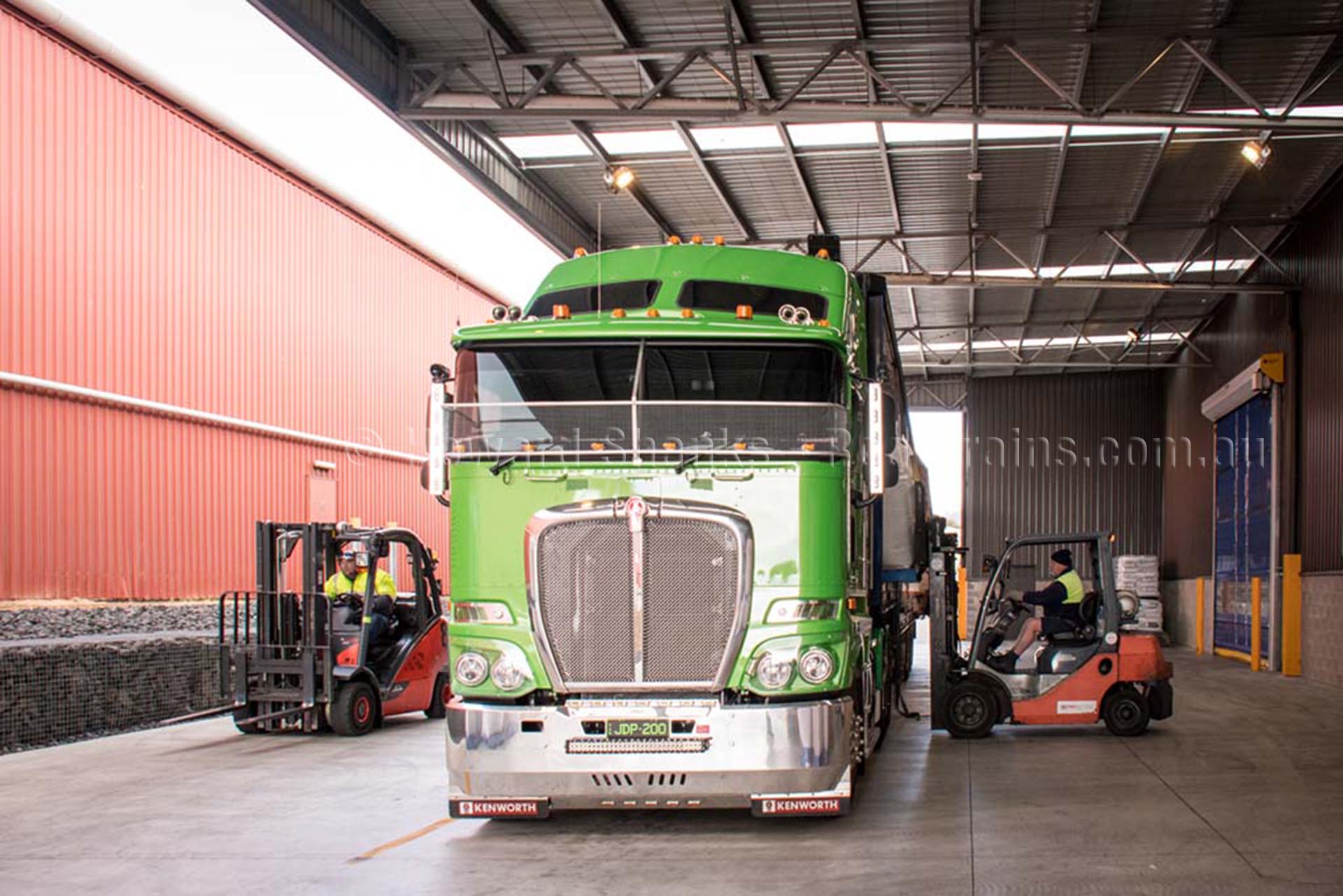 “It’s a very clever system,” he added. “The fuel saving I’m getting from this new K200 is approximately a quarter better than my older truck.”

Jono ‘s not a short fellow and the 30mm more shoulder and legroom in the K200 compared to other COE models make for a more comfortable day in the office. What’s more, there’s also space under the bunk for two amply sized slide-out drawers, which Jono has opted to have twin 30-litre fridges installed. During the school holiday’s Jono takes his son along and admits that his son asked if he could have his own fridge.

In addition to the safety feature on K200, Jono has equipped his trailer with the latest, ‘StrapnGo’ load restraint system. This unique Australian designed system eliminates the need for drivers to throw straps over pallets inside a curtain-sider trailer. The 2.5-tonne ratchet straps are fixed to the roof of the trailer with a bungee cord threaded through a series stainless steel pulleys mounted off a sliding track. The Bungee cord retracts when the strap is released and pulls the strap upwards to the roof. When the strap is fastened the bungee strap stretches as the strap is tightened over the load. For loading and unloading the straps can be slid along the track to either end of the trailer. The system is especially handy for tall loads close to the roof that are often impossible for drivers to throw a strap over from the ground. 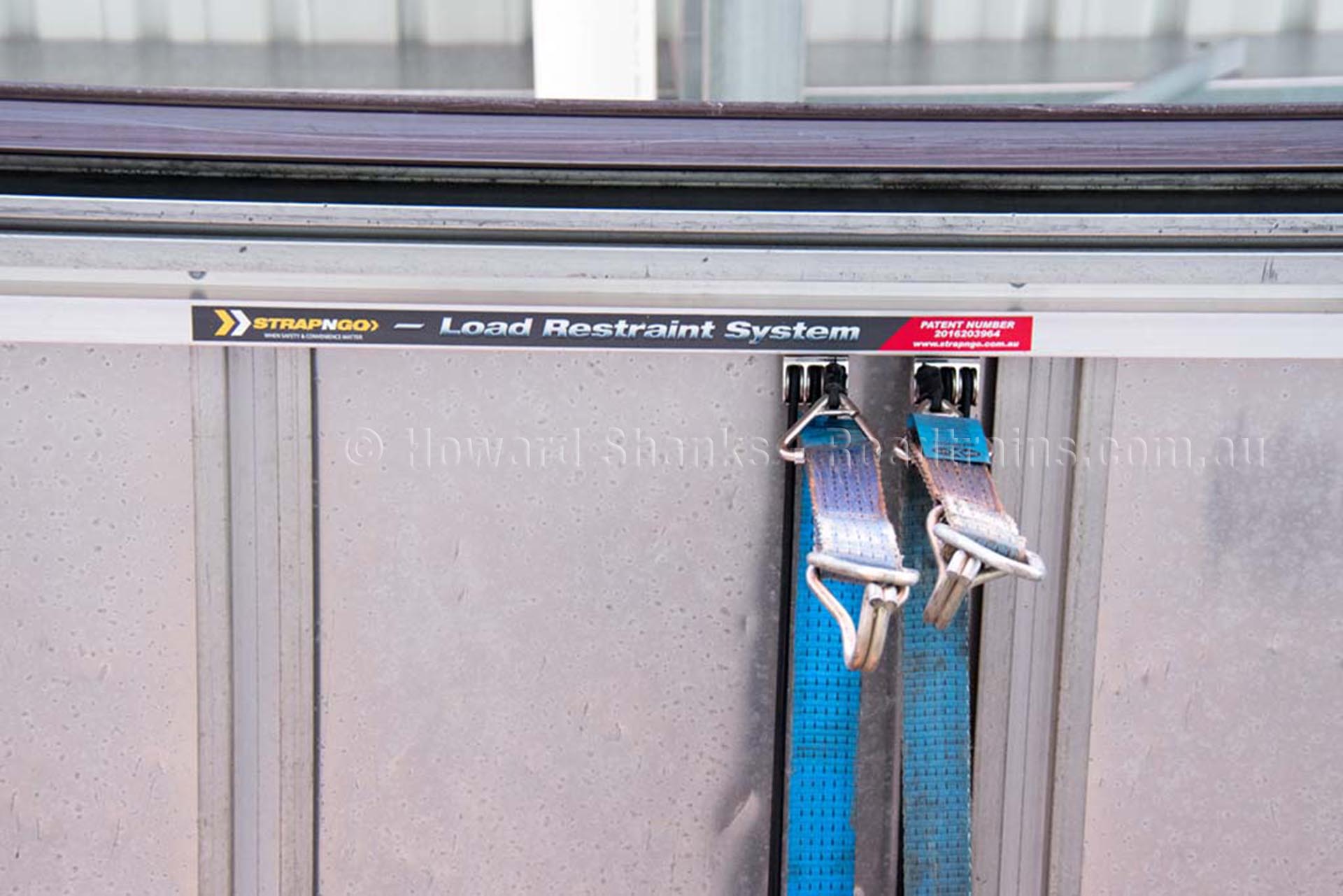 Jono concedes that improvements in safety have made the industry and his job a lot better in the long run. “Look, I’ve got a young family and not only do I want to get home every night to see them, but they also want me to come home safely at the end of the day too. That’s why I wanted all the safety features on this our latest Kenworth,” he concluded.

Jono, also extends an invitation to all members of the transport industry to come and support the Memorial Day at the Tassie Truckies Memorial Wall, Epping Forrest, Tasmania on 18th of January 2020. 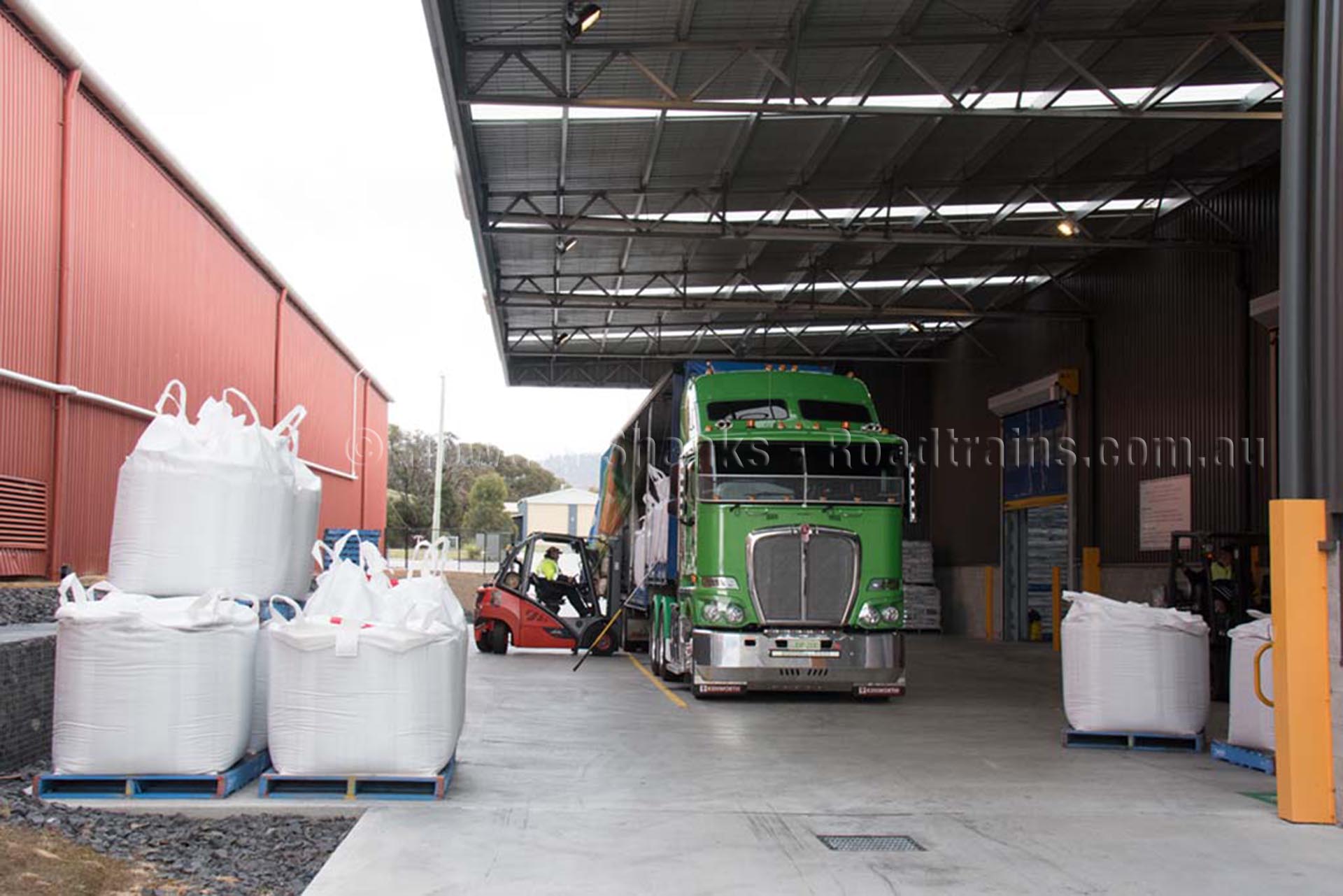