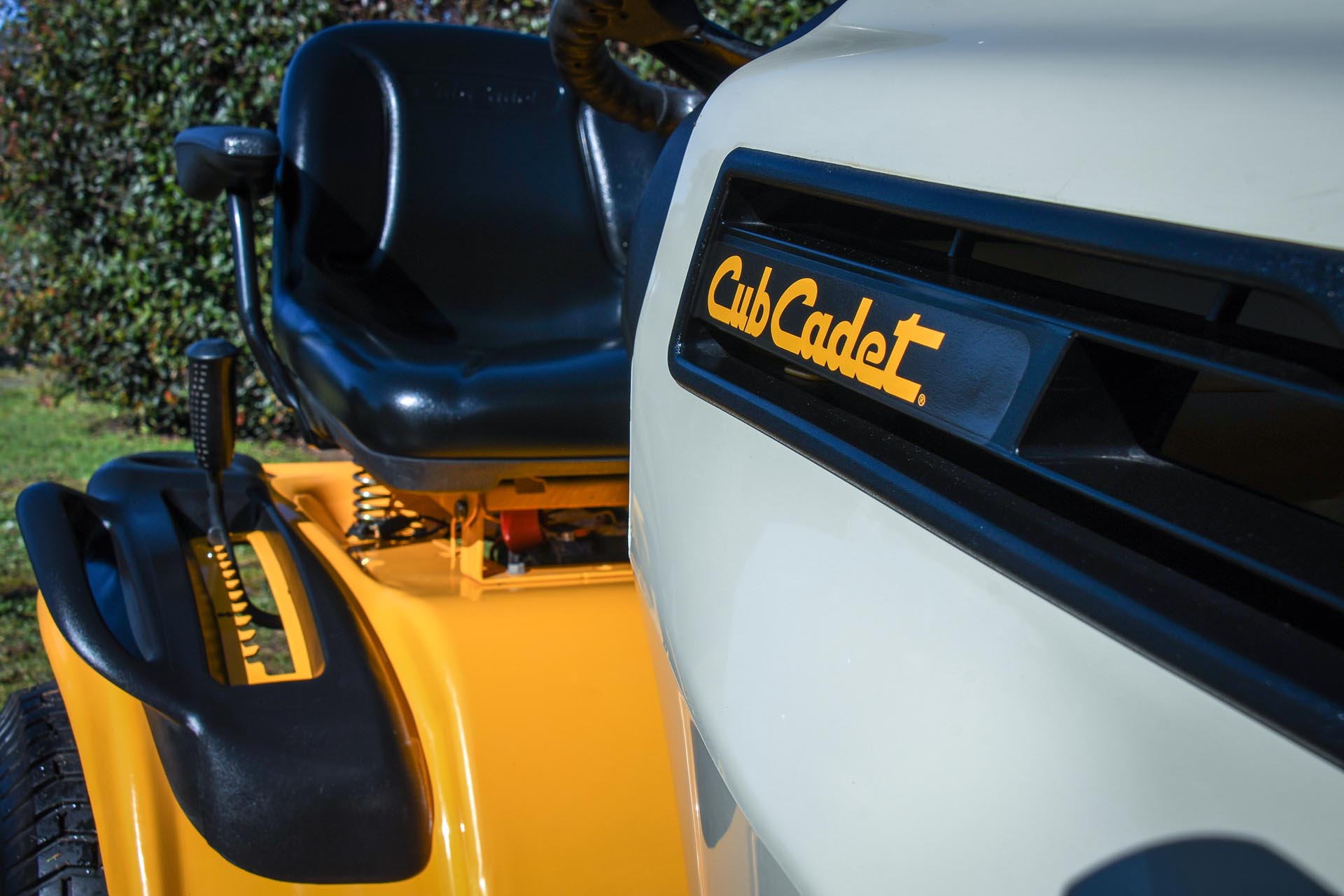 Boasting a wide 50-inch cutting deck with three blades, 24 horsepower Kohler engine and hydrostatic drive, the Cub Cadet LTX1050 is well suited to cutting council parks and grounds up to 1.6 hectares (4 acres). We sent Howard Shanks off to cut 2.5 acres of grass and put the Cub Cadet LTX1050 through its paces to find out if it lives up to the hype in the brochure.

Roughly a decade ago I owned a Cub Cadet. It was the smaller LT1018 model. It served me well over the years I owned it and had over 500 hours on it when I finally sold it. One thing that struck me about that machine was its solid build and reliability. Maybe it had something to do with being American made, I’ve long been a fan of things made in America like Harley-Davidson motorcycles, Chevrolets cars and so on and that’s mostly because of a reputation for quality associated with American made products.

International Harvester established the Cub Cadet model line in 1960 as a premium range of small tractors. They quickly gained an enviable reputation as a robust durable workhorse. However, during the early eighties when International Harvester began having financial problems, among other things, they sold their Cub Cadet brand name minus the IH symbol to MTD in Valley City, near Cleveland, Ohio. MTD continues to promote Cub Cadet as a premium range of professional lawn mowers, even though they’ve been made by MTD Machinery Suzhou Co in China since the facility opened in 2007.

The good news for owners is because Cub Cadet shares a tremendous amount of parts with other brands in MTD’s stable, like Bolens, Rover, Troy Built, Yard Machines, and MTD mowers the parts commonality mean availability and pricing are competitive. 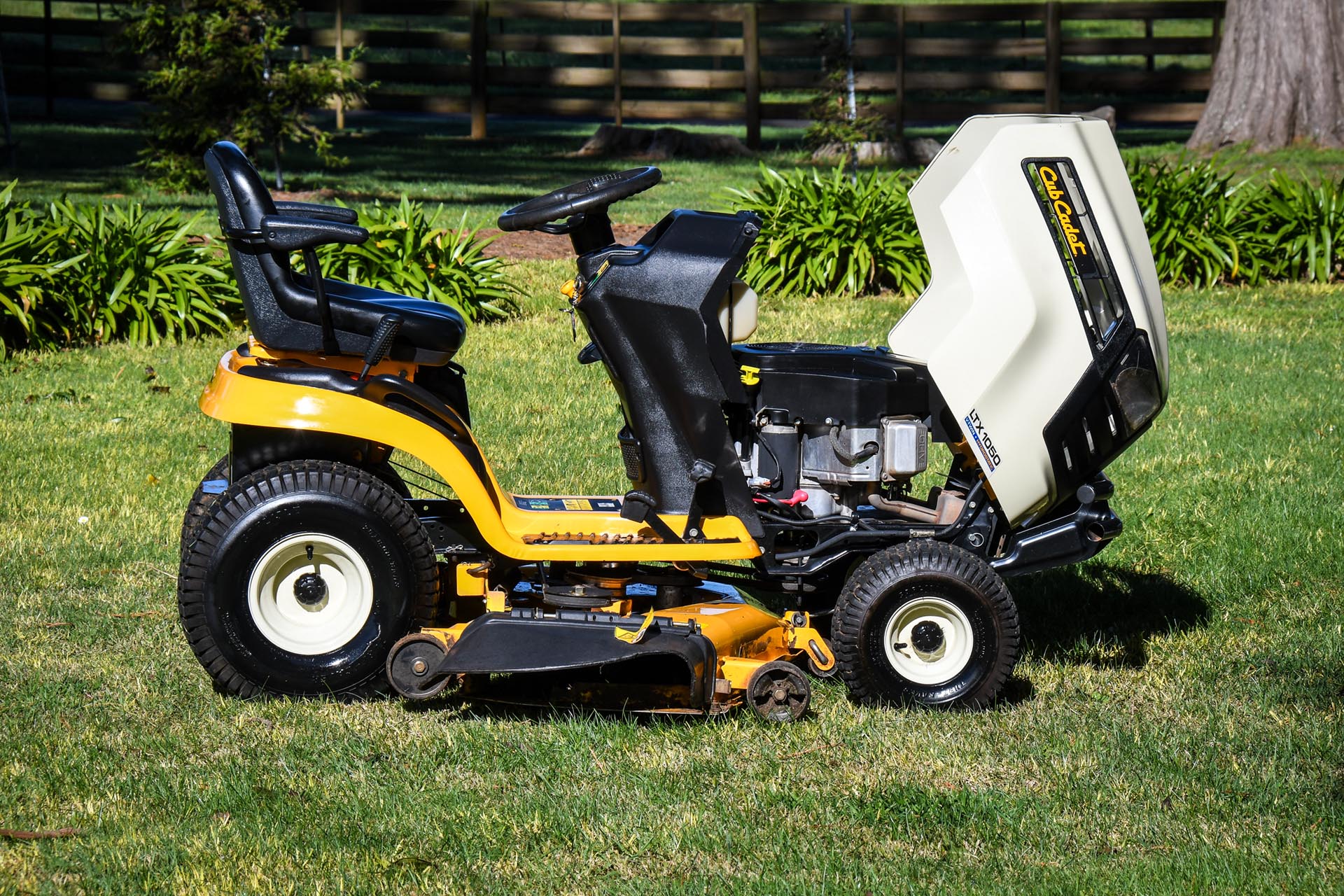 The LTX1050 is powered by Kohler 24HP (18.6kW) KT735 V-Twin OHV engine with a front mounted dual-seal air filter. Lubrication is full pressure system with spin-on oil filter. Drive is via a V-Belt from the engine to the Tuff Torq Hydrostatic transmission, with speed and direction controlled by pedals on the right-hand side. A cruise control lever is located in the middle of the centre console for mowing at a steady pace. This lever doubles as the park brake lever when the mower is stationary. When the brake pedal is pressed all the way down the lever is pushed downward to lock the brake pedal on.

The fuel capacity is 13.2 litres (3.5 Gal) and is located under the hood behind the engine. The filler neck is on the left-hand side, it is somewhat smaller in diameter than some other mowers in its class and requires a funnel or spout on the jerry-can when filling to avoid fuel spills.

When getting off the mower with the engine running, it is necessary to engage the parking brake before alighting from the seat, otherwise, the seat safety switch will kill the engine.

While on the safety subject, the LTX1050 Cub Cadet comes with RevTEK reverse mowing technology to allow the mower to cut in reverse. To activate the reverse cutting action, when the PTO is engaged, rotate the key counter clockwise one click back from the green normal mowing position to the reverse position and press the caution button to acknowledge you’ve looked behind the mower for children and obstacles. The RevTEK feature will stay active till the key is moved back into the normal position or the engine is turned off.

The operator is treated to a Cub Comfort high-back seat with armrests and 150mm (6-inches) seat adjustment. The steering wheel is the comfort-grip model which drives automotive style ball joints with grease type kingpins on the heavy-duty cast-iron front axle. 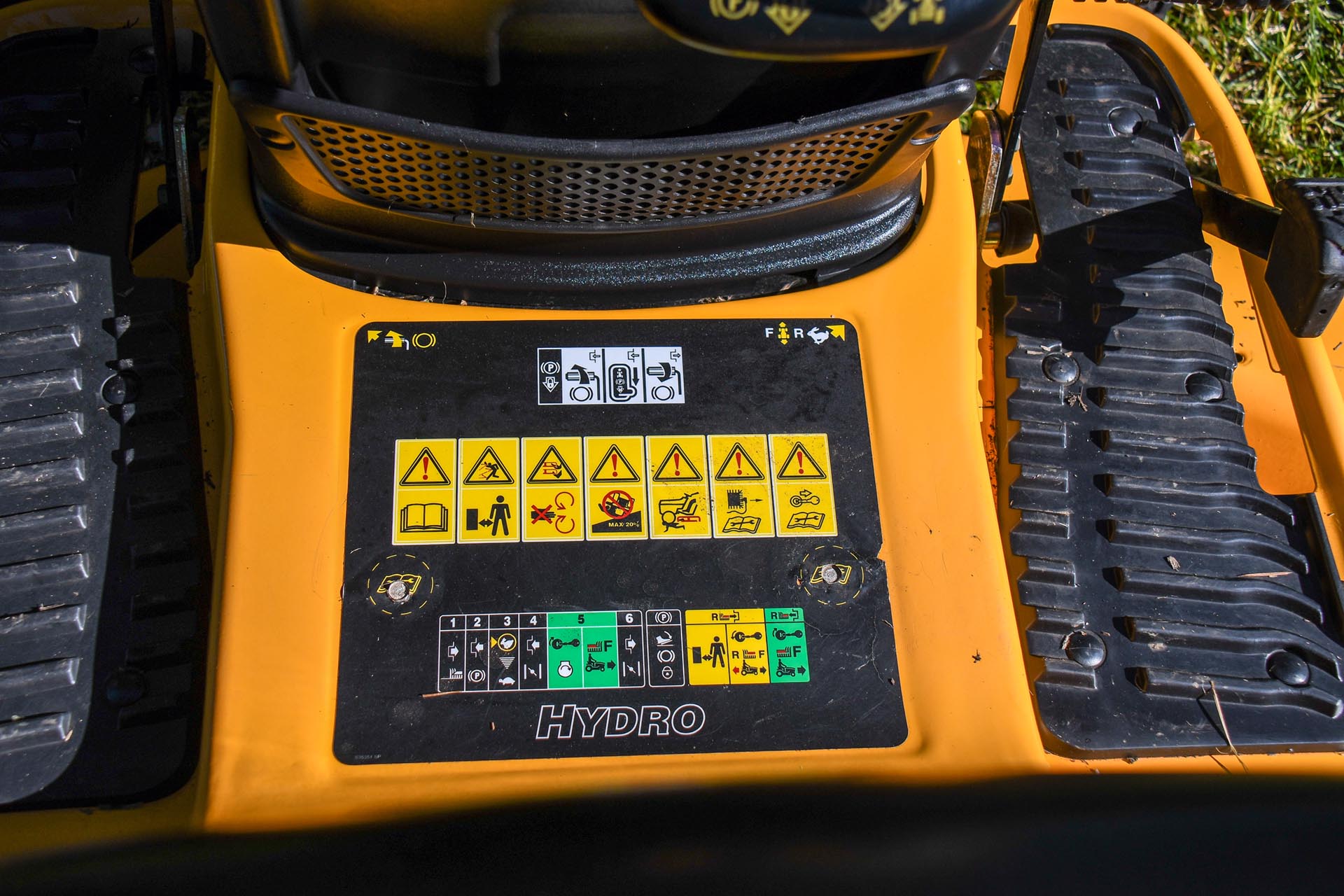 The mowing deck has a 50-inch (1270mm) cut and made of 12-gauge stamped steel construction fitted with four anti-scalp wheels. The height has 12 position adjustment via a lever on the right-hand side rear fender. There are two garden hose nipples which feature high-pressure washing nozzles, these are activated when a garden hose is attached to the nipples. The factory fitted spindles are die-cast aluminium with sealed ball bearings and no grease nipples.

According to the brochure the LTX1050 chassis is made of a 9-gauge steel frame that is robotically welded for superior strength. 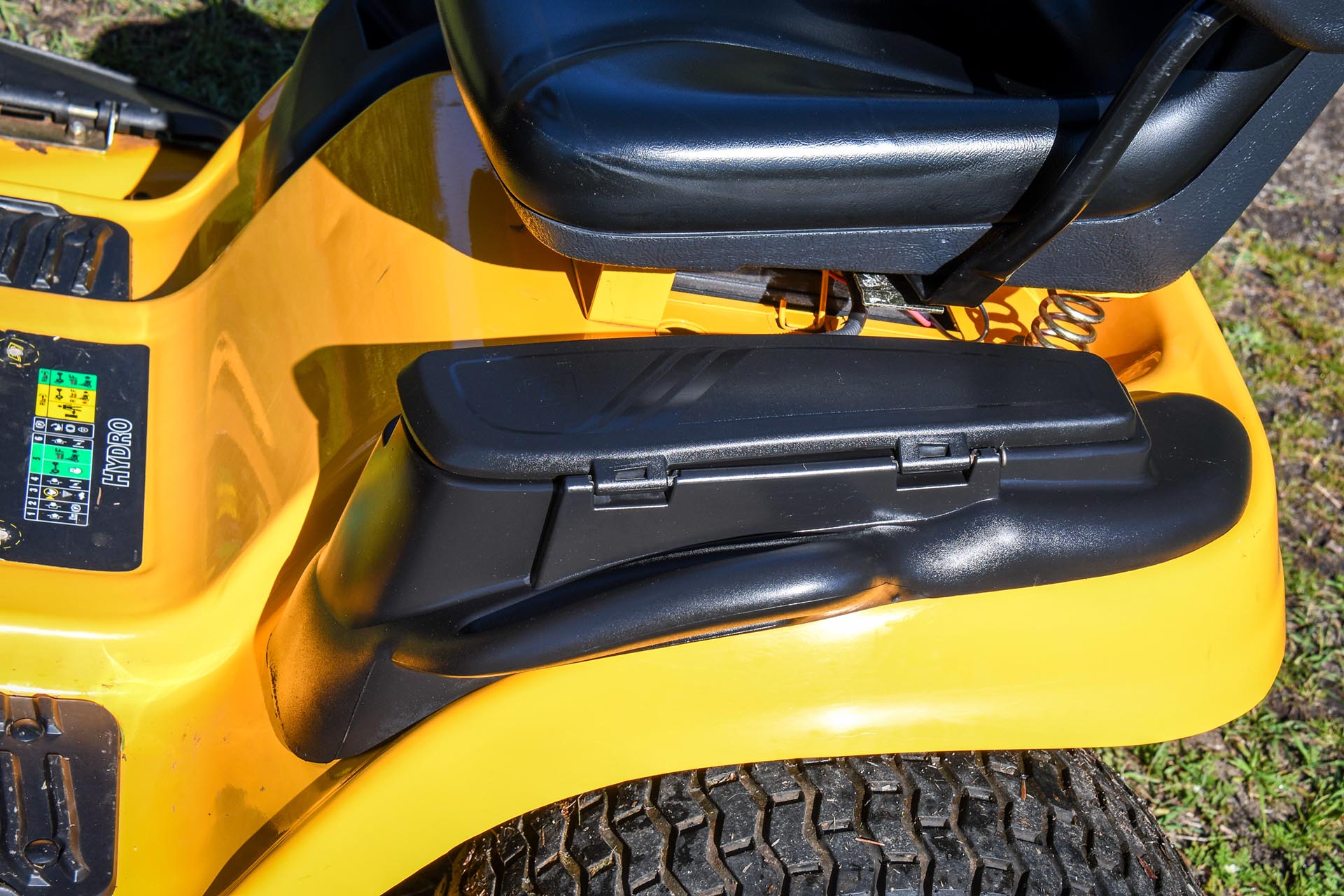 This mower had the optional front bumper (retails for approximately $100) and mulcher plug kit, (retails for around $150), and it’s a worthwhile investment to keep the lawns healthy and save clean up time collecting grass clippings. Not to mention finding a suitable place to dispose of the grass clippings.

It also can comfortably tow a 283-litre (10-cubic feet) wheelbarrow with a 300kg (660 lb) capacity. This tow behind wheelbarrow is extremely handy for collection garden weeds and cuttings and transport them to the composting area. 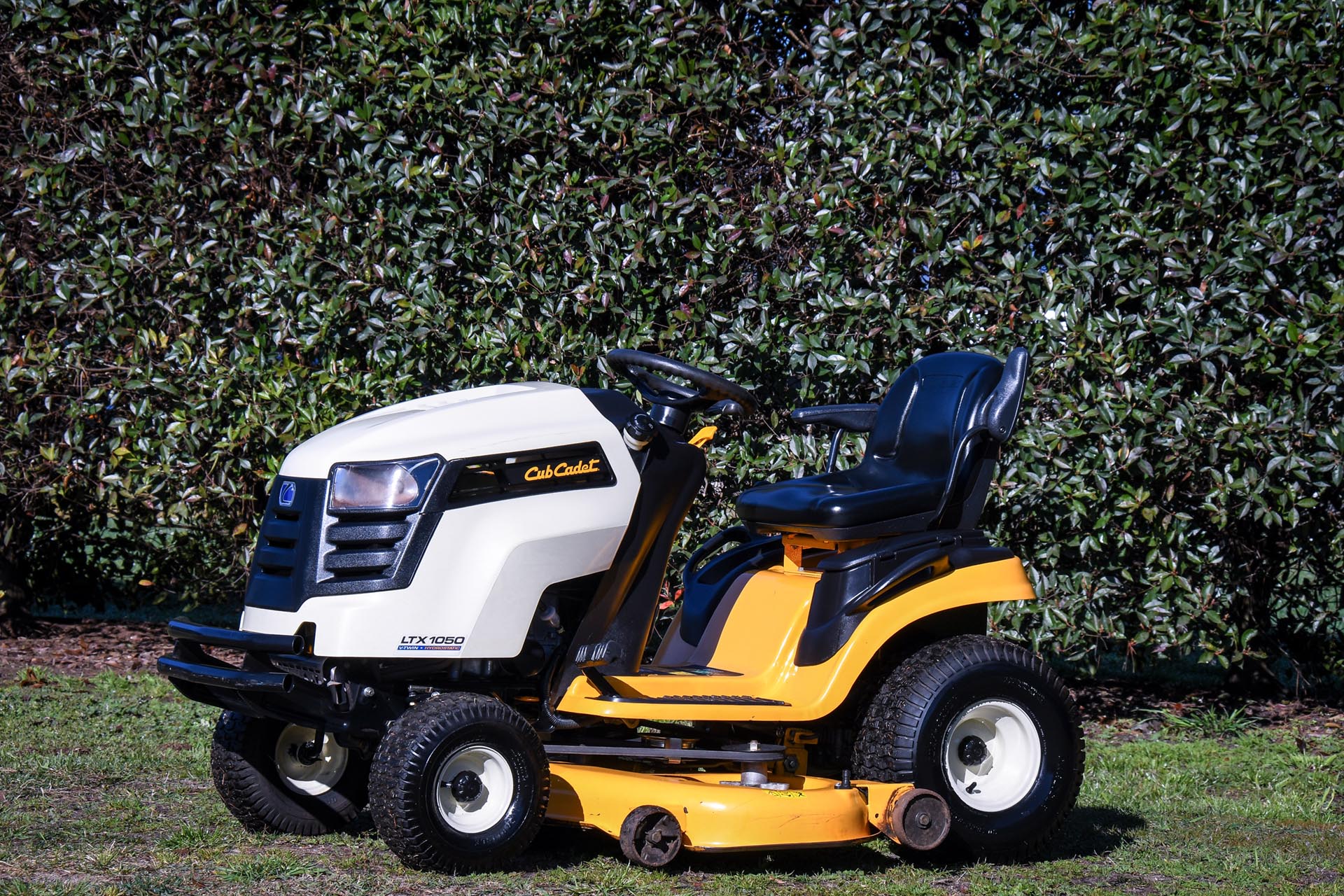 The front kingpins require greasing periodically as do the front wheels. The original deck spindles were replaced with grease type which has increased the bearing life of all three deck spindles. The deck needs to be removed and turned upside down to grease the spindles. Thankfully the deck is easy to remove and can be carried out in few minutes. Typically, while the deck is out and upside down it’s a good idea to check the condition of the blades and sharpen if necessary. The operator’s handbook recommends lubricating all rotating and bearing points with a few drops of light oil every ten hours. I personally use Wurth HHS Drylube on my ride-on because of its excellent lubricating properties and ability to reach hard to reach areas with outstanding creep and gap penetration characteristics. Ironically the handbook also recommends lubricating the cutter spindle shafts every 25 hours, which requires the deck to removed.

However, if you’re not using your ride-on commercially you might find like I do, that the machine only does approximately 50 hours every 12 months. On my personal mower I typically, perform this service in early spring so the mower is well serviced ready for the busy grass growing season. Service costing wise, the parts required to carry out a full service on the LTX1050 cost approximately $90 and it takes approximately an hour to perform a thorough service including removing and replacing the cutting deck, (there is a complete list of part numbers and costs at the end of the article). 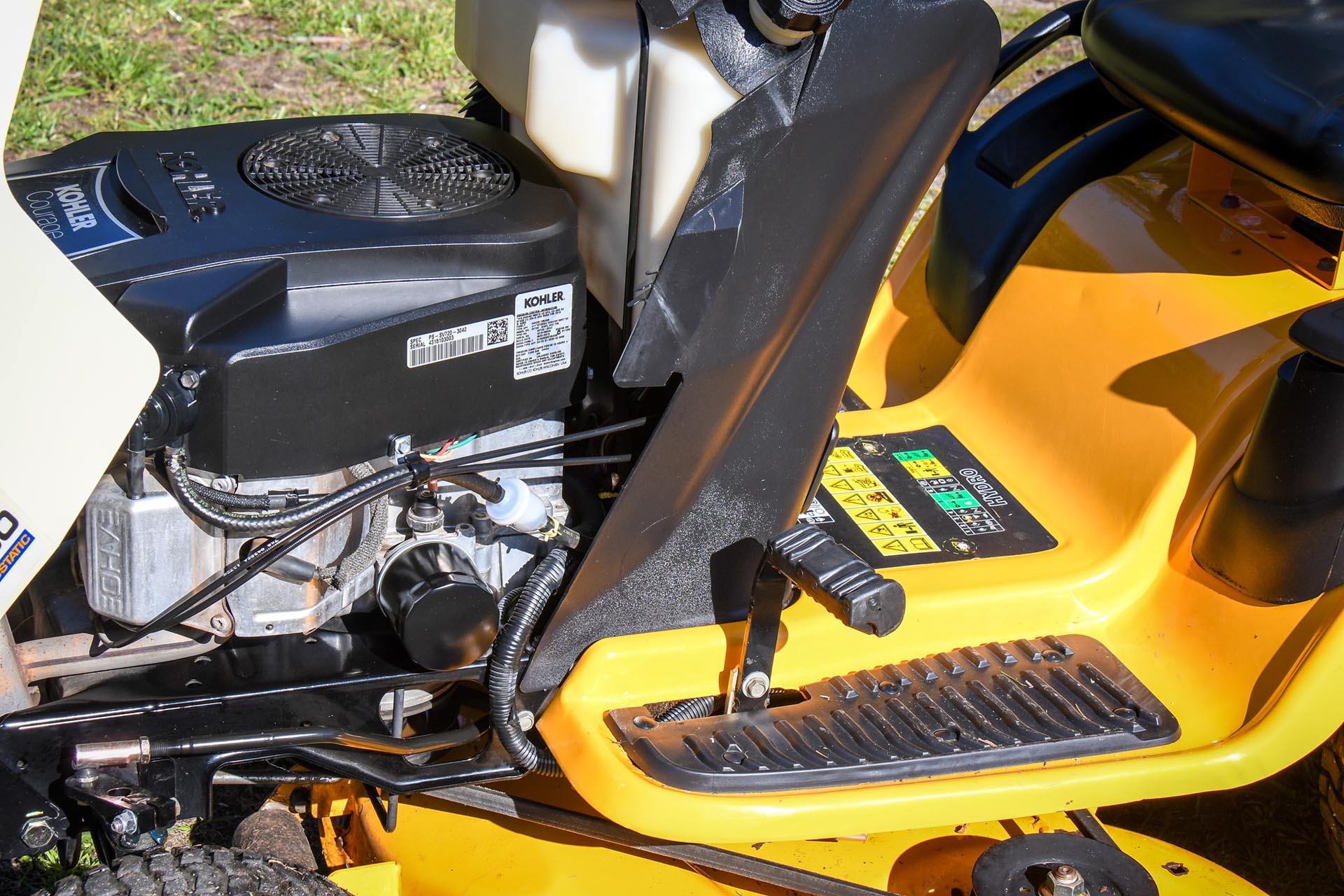 Serviceability of the Cub Cadet is ok, but not as good as similar Competitor models

The LTX1050 certainly ticks the box of premium lawn tractor when it comes to comfort and ease of use. The seat is certainly comfortable and easily adjustable, the armrests a nice feature especially when you’re sitting on it for a length of time. The armrests fold up out of the way for mounting and dismounting. The 24 HP Kohler engine has plenty of power drive the three blades on deck as well as propel the machine along. Interestingly, the Kohler engine is a very efficient power plant, fuel use, was considerably less than I’d expected for such a big power plant.

The turning circle is very tight given the size of the machine, and it was very easy to manoeuvre in around the tall trees and gardens beds on the grounds we tested the machine. The reverse cutting feature also worked a treat

It does have headlights; however, I feel they are more cosmetic than practical, the lens is not a tight seal over the light body which meant the inside of the headlight quickly filled with dust and debris. This, in turn, caused the headlight reflector to discolour rending the light useless. But who wants to cut grass in the dark anyway?

Probably the biggest disappointment with the LTX1050 was with its electrical system, which appears to have suffered as a result company cost-cutting in the manufacturing process. The battery simply wouldn’t hold a charge and could barely crank the engine. After replacing the supplied battery with one out of my Harley-Davidson the mower’s starter was somewhat more eager to respond to signals from the key. 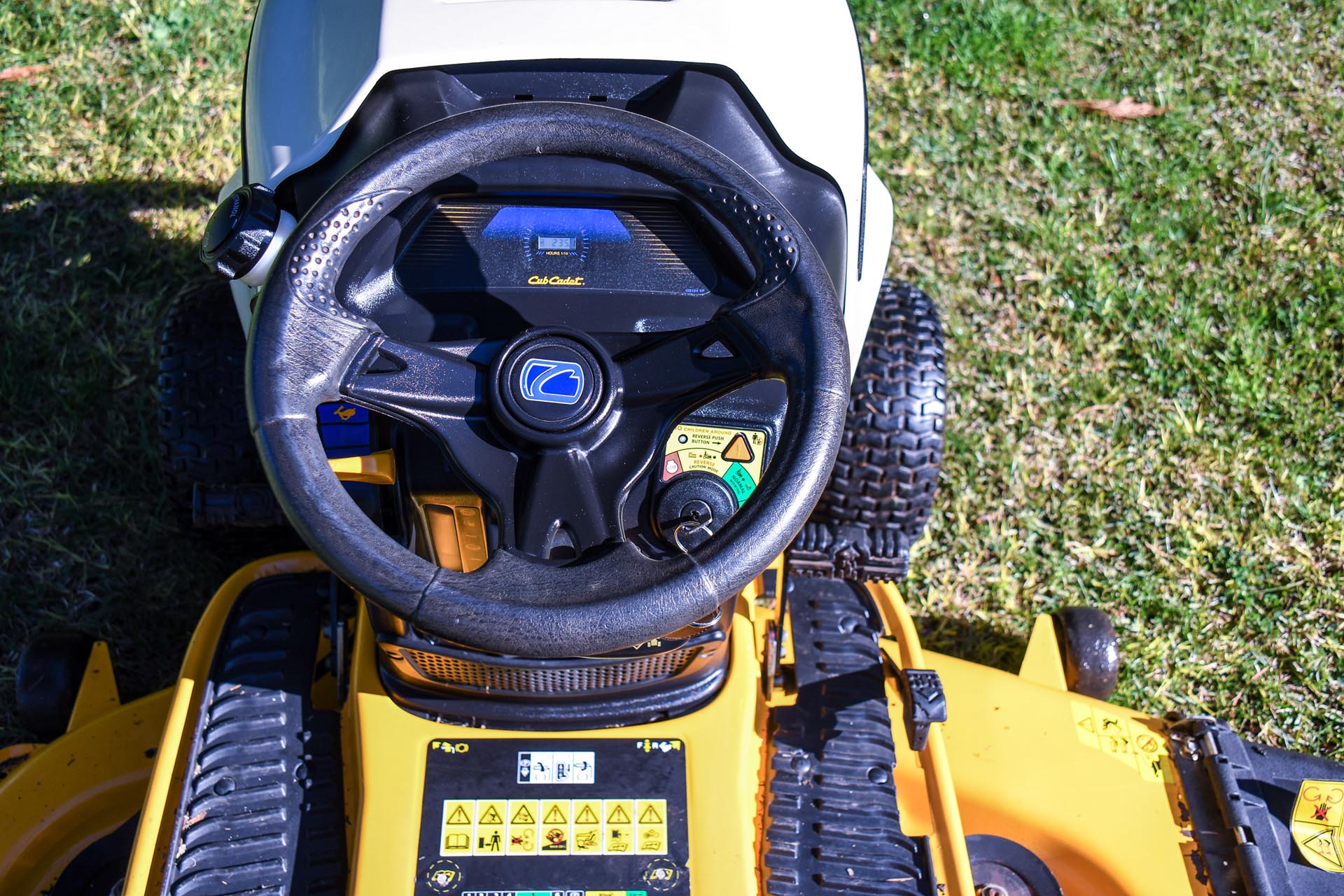 Cockpit of the cub cadet

This problem must be widespread across the Cub Cadet model range because when I did a google search to research what the problem might be pages and pages appeared, most with the same problem I was having. Persistence and resourcefulness paid off. I discovered the main wires from the battery that is located under the seat travel approximately 900mm to the starter motor on the engine, they are far too small to carry the current required to crank the engine. I replaced these and installed a larger solenoid which allowed more power to flow from the battery to the starter. Once this modification had been made the Kohler engine leapt into life effortlessly every time the key was turned.

The second disappointment is with the finish of the machine and again more likely a result of cost-cutting at the factory. The preparation of steelwork must be very lacklustre as there were significant signs of rust bubbling under the paintwork in places and paint had already started flaking off in some places.

Overall, the LTX1050 Cub Cadet performed the task of cutting 2.5 acres of grass effortlessly and used very little fuel. With the mulcher plug inserted there were no grass clippings to collect and the result was a neat clean cut. In terms of a premium product, mechanically it ticked most of the boxes except for the electrical system and paintwork. With an asking price of $5500 – $6000 it certainly nests itself in the premium market segment. 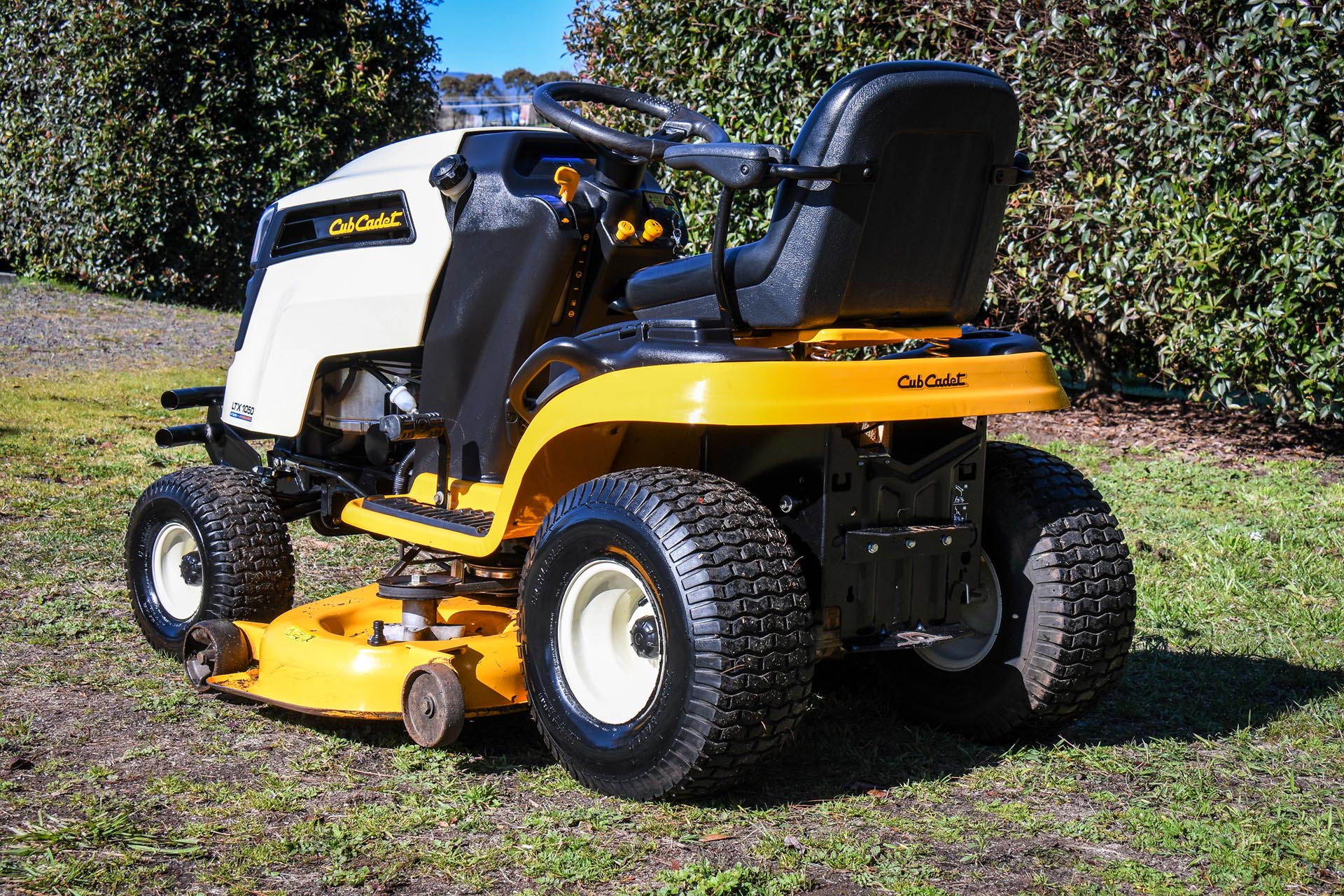