How truck air dryers work and how to maintain them

Draining the air tanks daily was a lesson instilled into me at an early age in a very fervent manner, it became a routine task at the end of each day. For today’s drivers this is becoming a task rarely performed as more and more manufacturers specify air-dryers in their standard spec nevertheless they still need to be maintained. 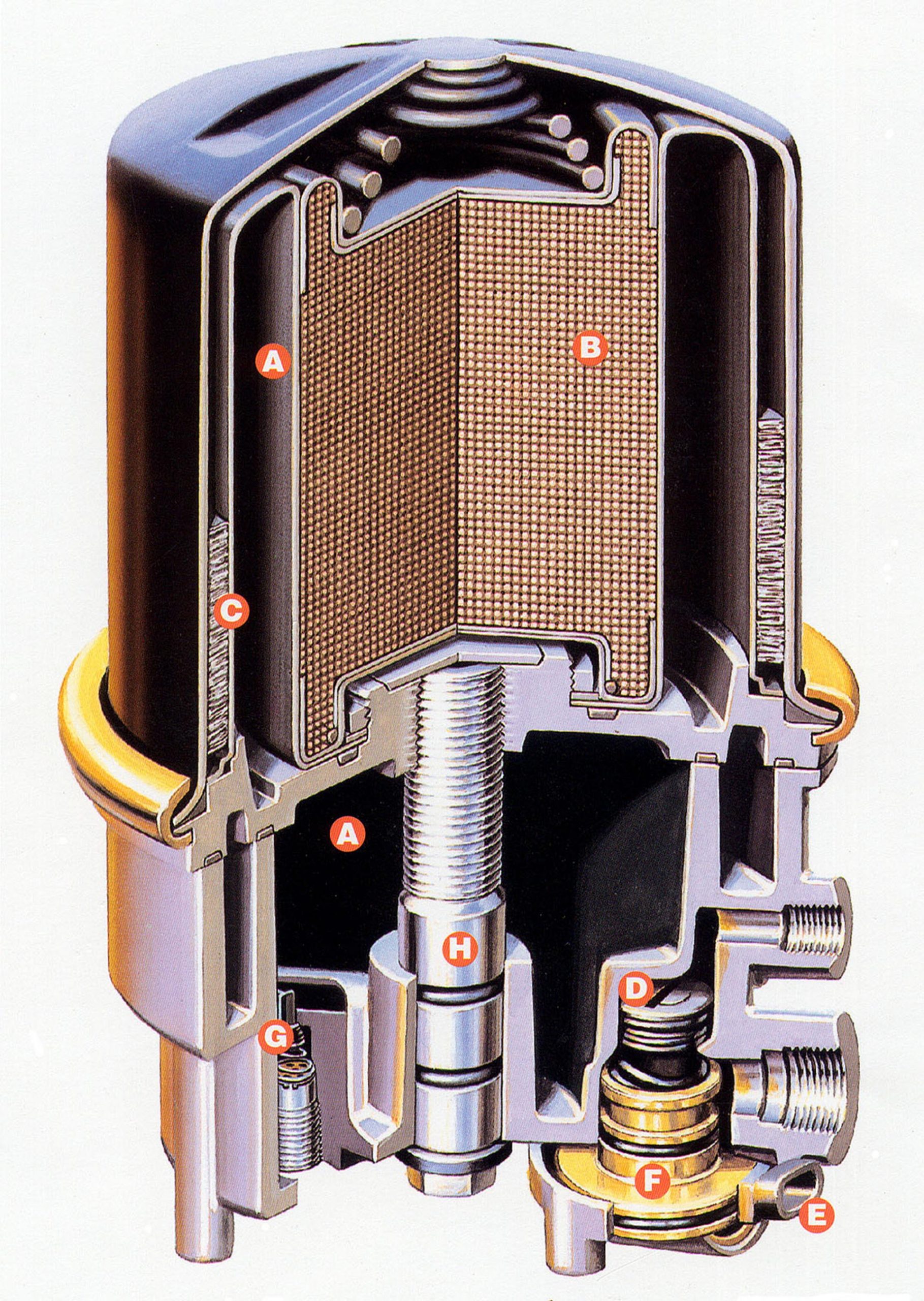 B Desiccant with high crush strength.

In days gone by, valves or taps at the bottom of a truck’s air tanks were opened at the end of each shift to let accumulated water spit out. This reduced the amount of moisture that found its way into more sensitive parts of the air system, including vital brake parts and transmission slave pistons.

Drivers seldom do that anymore. Some fleets install auto air drainers in combination with an air-dryer in an effort to keep moisture out of the air systme. Usually, small wires protrude from the tank’s drain value out under the chassis to an easily reached position. A simple pull and hold motion is all that’s required to release the moisture. However, if your truck has an air-dryer fitted and you open the tank values and water spits out, its time to check the air-dryer because it’s probably not doing its job.

Air-dryers come in various types and are maintained in a variety of ways at intervals dependant on the vehicle operation, type and size of the air-dryer. Dryers like the Bendix’s AD-IP and AD-SP or SKF Turbo 2000 with internal heater or the Meritor/Wabco are typical of those most commonly found on modern heavy-duty trucks.

It pays to shop around when it comes time to replace the filter as a lot of Mercedes Benz, Scania and Volvo trucks are fitted with the Meritor/Wabco system which gives opertors the option to purchase genuine Wabco filters rather than the more expensive rebranded filters with Mercedes Benz, Scania or Volvo markings. 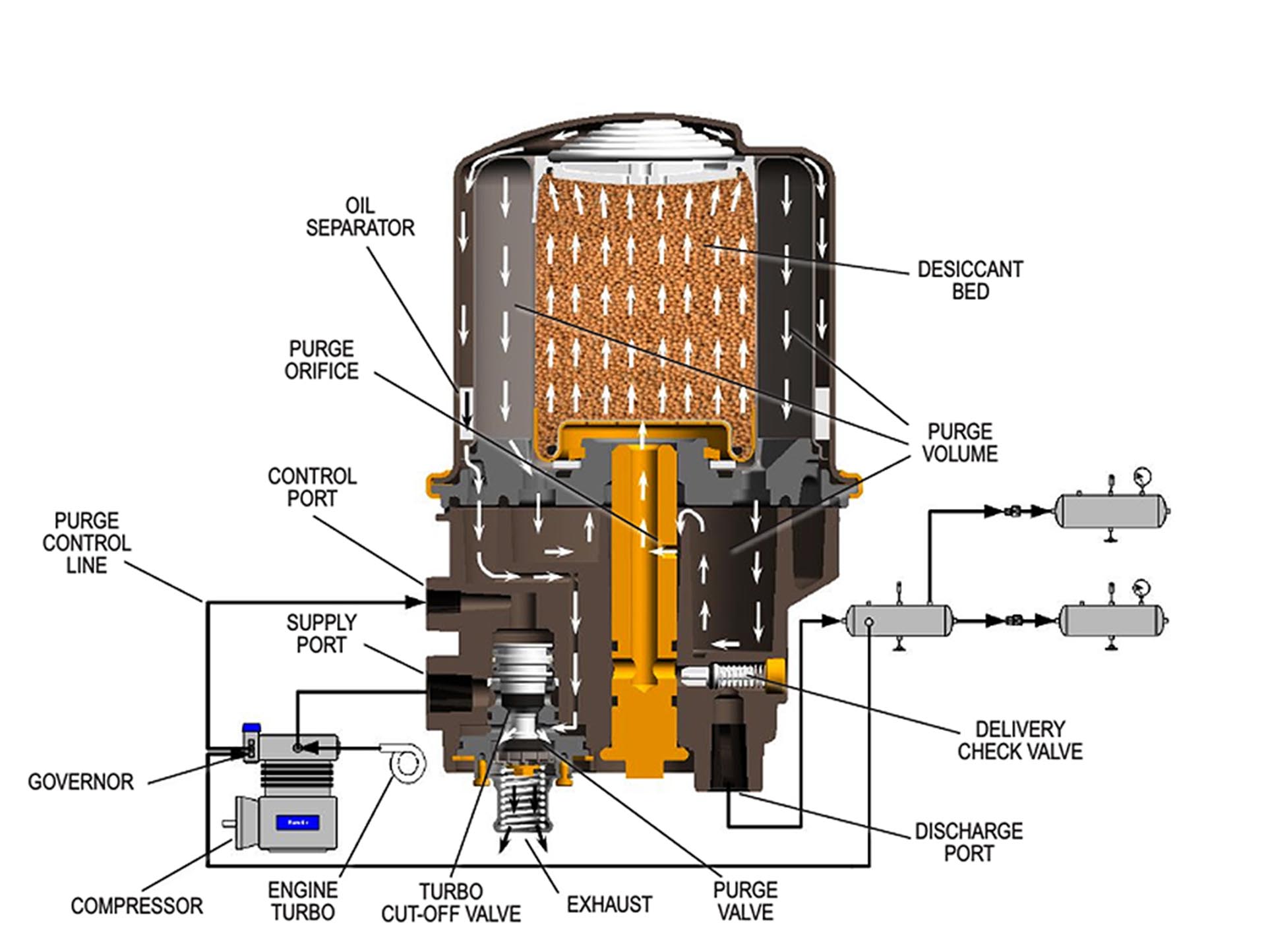 The principle behind a desiccant dryer is to remove moisture and contaminants before the air reaches the first reservoir tank – commonly known as the ‘wet tank’. How they work involves a simple procedure; air travels through the end cover assembly – called the charge cycle – it’s direction in flow changes several times, reducing the temperature and causing contaminants to condense and drop in the bottom of the sump. After exiting the end cover, the air flows into the desiccant cartridge. Once in the desiccant cartridge, air first flows through an oil separator located between the inner and outer shells of the cartridge. The separator removes water in liquid form as well as oil and solid contaminants.

Air, along with the remaining water vapour, is further cooled as it exits the oil separator and continues to flow upward between the outer and inner shells. Upon reaching the top of the cartridge, the air reverses direction of flow and enters the desiccant drying bed. The air is drawn through a bed of clay beads. The special clay attracts water molecules which adhere to the beads’ surfaces. The moisture is “adsorbed” onto the beads’ surface rather than absorbed by soaking into the beads. Keeping moisture on the beads’ surface allows the moisture to be removed, greatly extending the life of the desiccant. 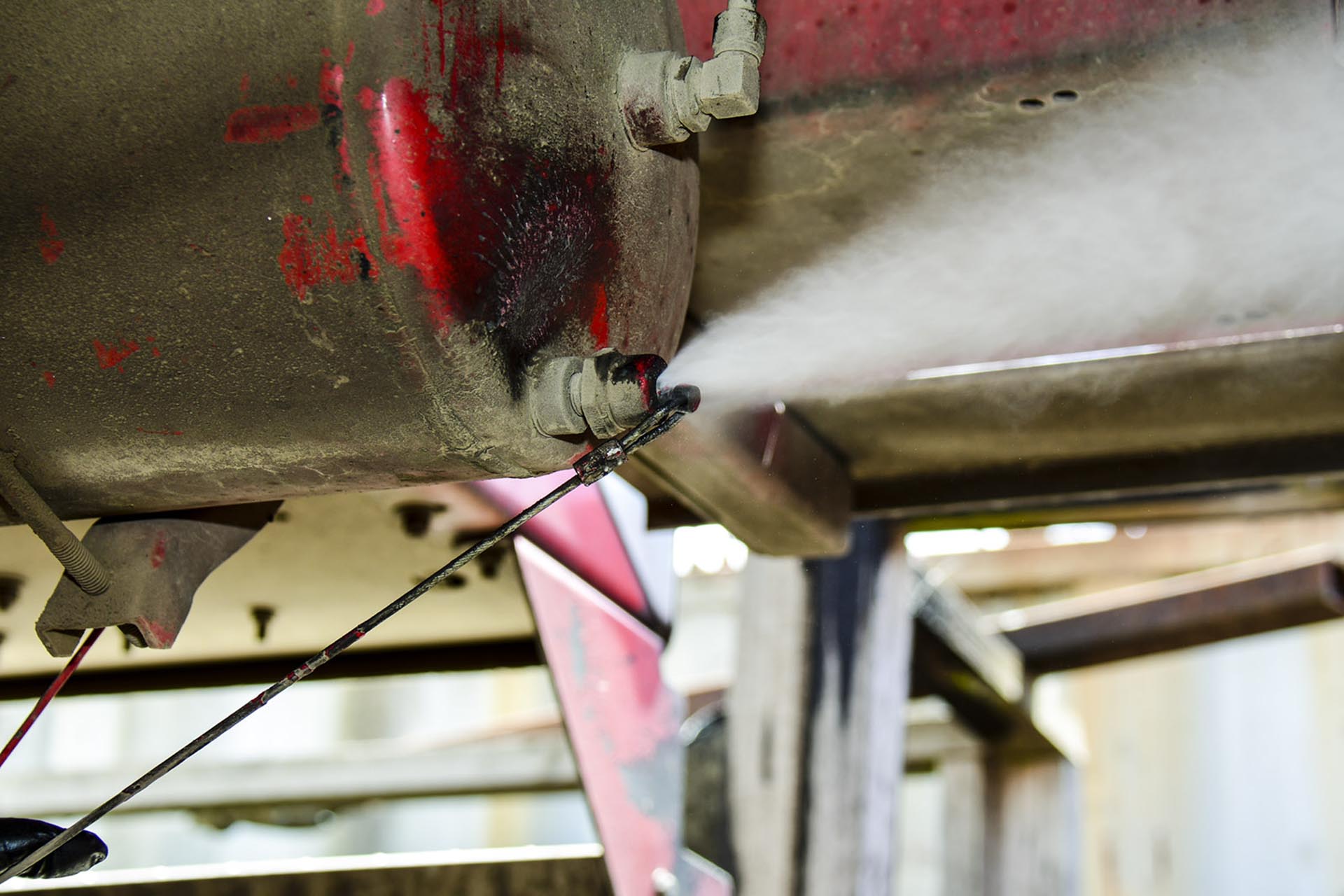 As the air brake system pressure reaches the cutout setting of the governor, the governor unloads the compressor – air compressor stopped – and the purge cycle begins. Water and contaminant in the end cover sump are expelled immediately when the purge value opens. Oil and solid contaminants collected by the oil separator are removed by air flowing from the purge volume through the desiccant drying bed to the open purge value. The purge cycle takes about 30 seconds. This is fast, considering that thousands of beads must be stripped of moisture.

The desiccant itself needs periodic changing. How often this is (or should be) done depends on the size of the desiccant bed. As most air-dryers are manufactured in the US, desiccant is measured in pounds, with 2 to 5 pounds used in the various models available from many suppliers. Basically, the bigger the cartridge, the longer it will last. In general, a desiccant cartridge will last two to five years in normal highway operation. However depending on the humidity and type of operation, especially where a lot of air passes through it, the cartridge may need changing more often. 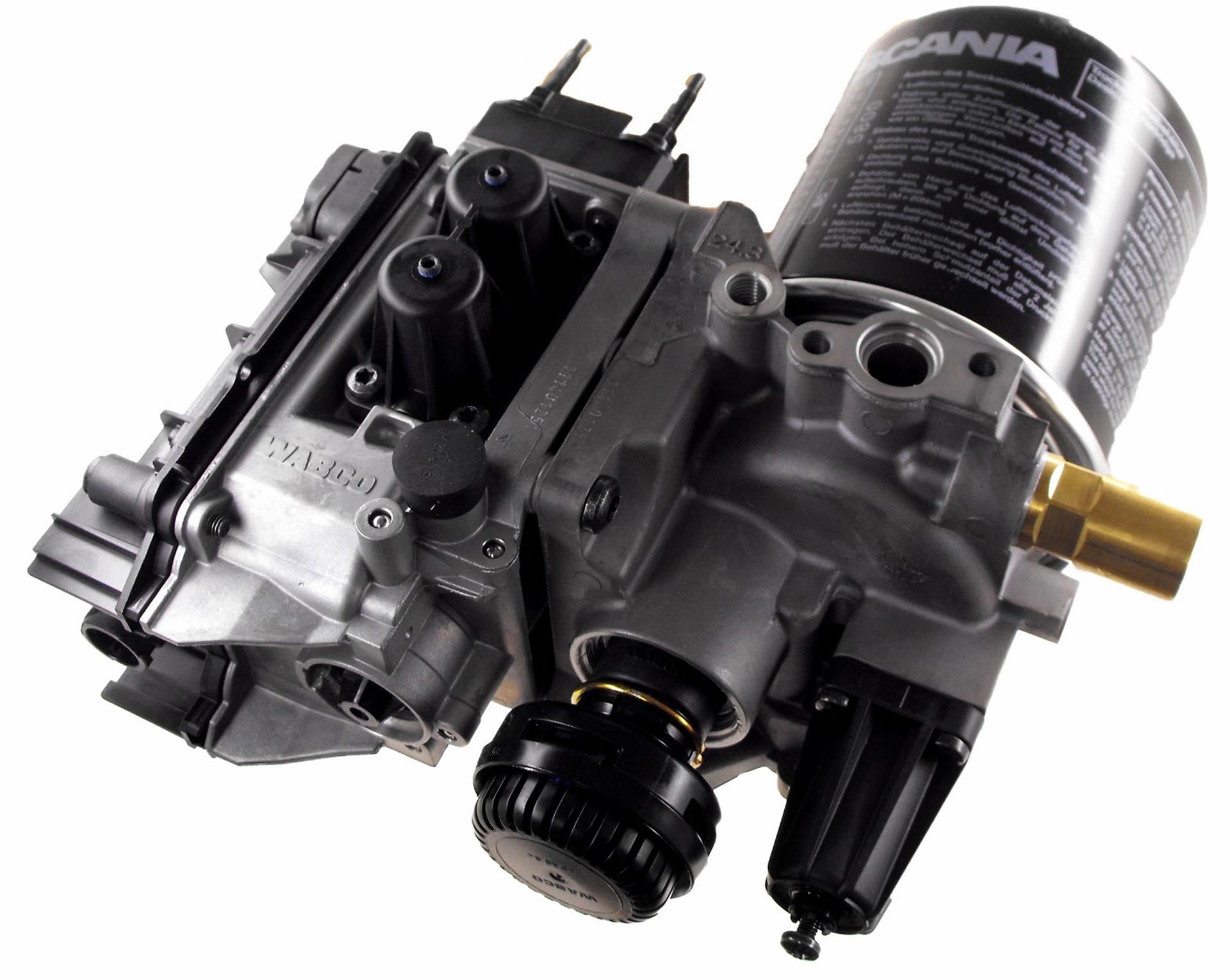 The primary function of the turbo cut-off value is to prevent loss of engine turbocharger air pressure through the air-dryer in systems where the compressor intake is connected to the engine turbocharger. The turbo cut-off valve also removes the “puffing” of air out the open purge exhaust when a naturally aspirated, single cylinder compressor, equipped with an inlet check valve, is in use.

Servicing is usually done by removing one or two bolts and lifting or spinning off the cartridge. Some models require the entire dryer to come off the truck. A label on the unit may include instructions otherwise check with the manufacturer.

So when was the last time you drained your tanks? 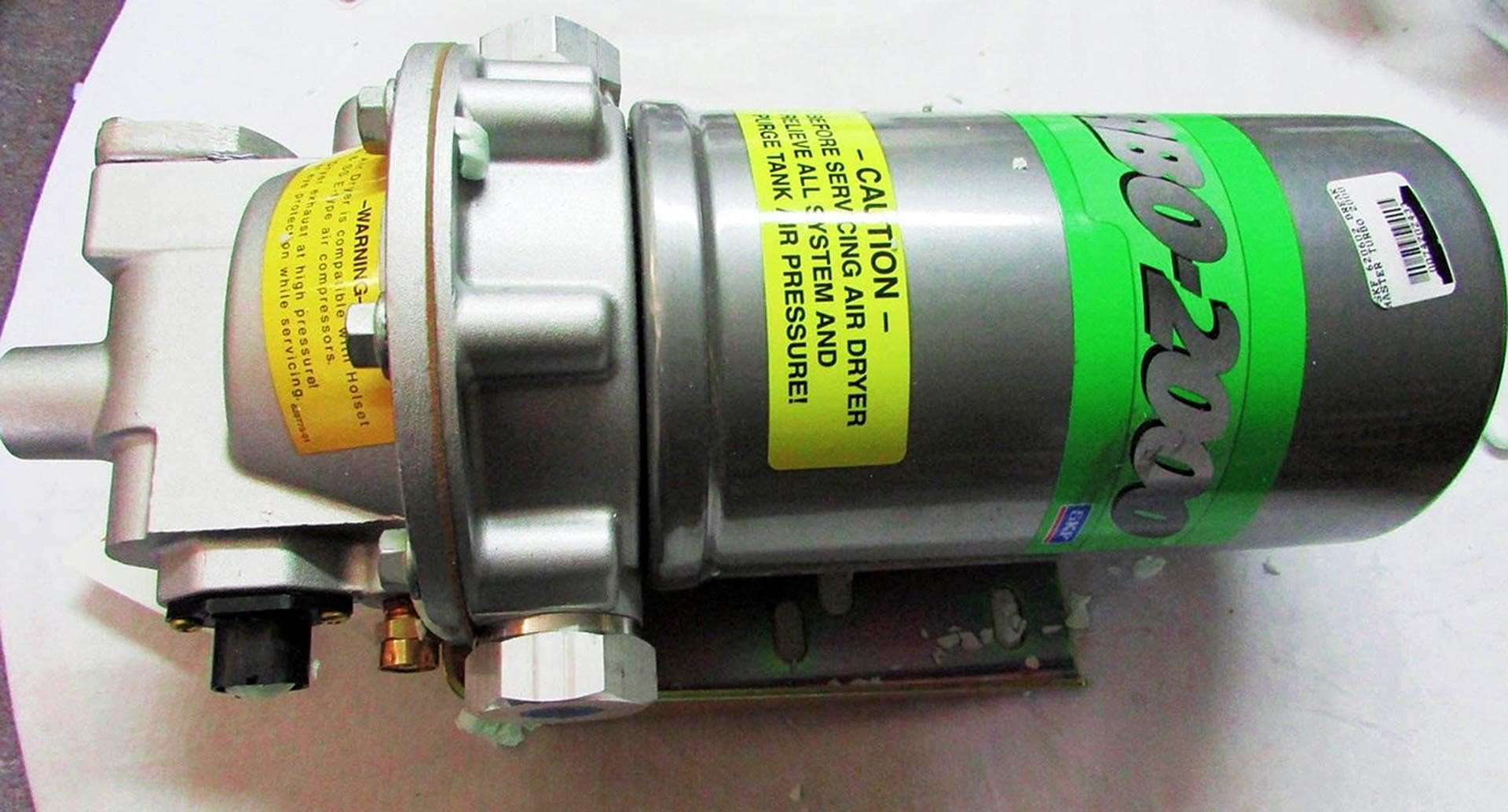 Regular maintenance every 900 hours or 40,000 kilometres or 3 months will ensure that your air system is kept in first class working order.

Check for moisture in the air brake system by opening air tank drain valves. If moisture is present, the desiccant may require replacement. However the following conditions can also cause moisture or water to accumulate in the system and should be considered before replacing the desiccant.