The advancements in digital camera technology are certainly making life easier in countless situations: Today, for instance, video calls are considered the norm for our kids, thanks to digital technology. In medicine, miniature digital cameras play a significant role in providing important information about the human body. Furthermore, the inspection scope I use to view the internals of my engines uses a tiny 5.5mm dual-view digital camera head. 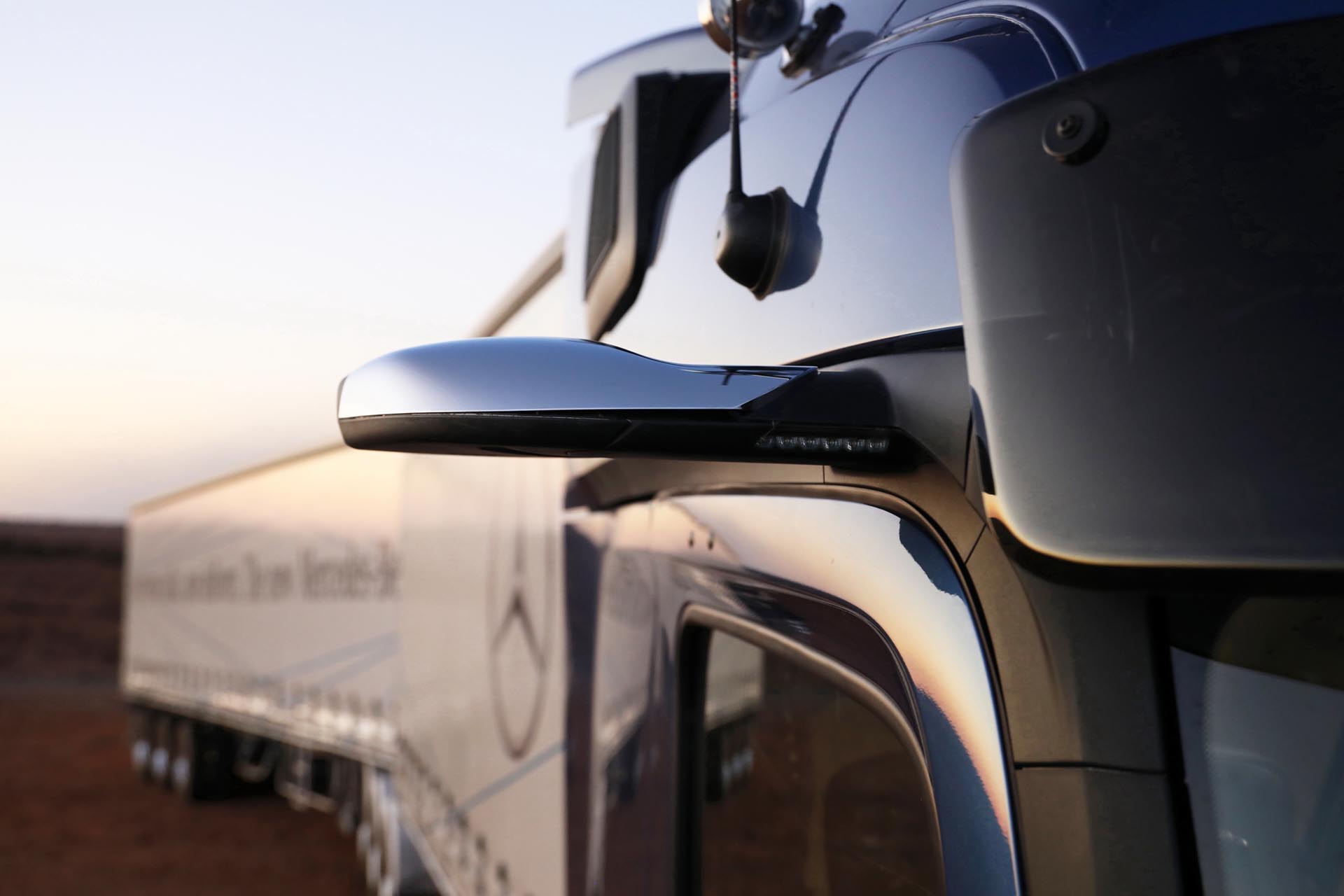 Additionally, in the automotive field, digital cameras have proven themselves in the role of rear-view cameras in cars, for example. Now, Mercedes-Benz Trucks has stretched the digital envelope a step further with the addition of MirrorCam to their Actros and Arocs models. Understandably, the inherent technology in the MirrorCam does more than merely replace the conventional door mounted rear-view mirror.

What changes will drivers notice?

Greater side visibility, for starters. The deletion of the traditional door-mounted rear and wide-angle mirrors opens up a greater area to the left and right of the cabin A-pillar. Now drivers have an unobstructed view which is a great advantage when approaching intersections and manoeuvring through tight turns. Furthermore, they no longer need to stretch to see if traffic is approaching from the left or right.

One disadvantage of the traditional door-mounted mirrors occurs during cornering when the driver loses sight of the rear of their trailers, not so with the new MirrorCam. The unit’s inbuild brains enable camera rotation in the direction of a turn’s inner radius. Therefore the rearmost end of the trailer is always visible to the driver. The default setting is for single trailers; however, the driver can adjust this setting to suit multi-combination (B-Double) trailer configurations. Although, on modern trailers, this will happen autonomously when the trailer transmits its geometric data to the prime mover. The driver still can manually rotate the swivel radius via the four-way rocker switch in the door. 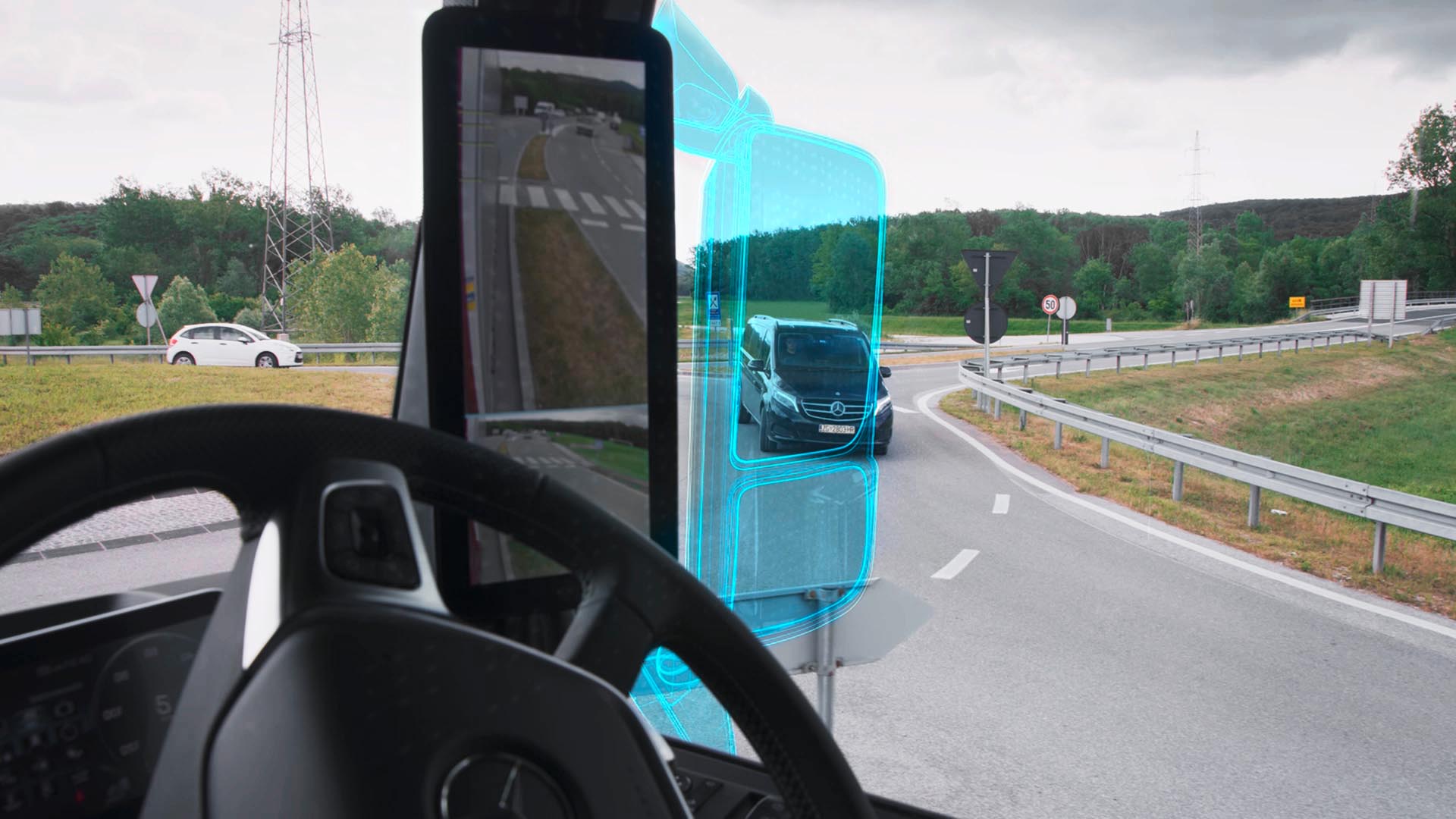 Does MirrorCam provide any benefits to trucking companies?

Most certainly! The enhanced aerodynamic design and smaller area significantly reduce fuel consumption. Mercedes-Benz’s engineers optimised the MirrorCam design and installation using wind tunnel testing, which results in a fuel consumption reduction of 1.5 per cent compared to a vehicle with traditional door-mounted mirrors.

Will dirt or rain deteriorate the image?

Driver’s will typically find rear vision deteriorates with traditional door-mounted mirrors, especially when the side windows become dirty or misted during inclement weather. However, thanks to a special lens coating, the camera’s high mounted position on the vehicle, the small roof above the camera lens, and the digital signal of the image to the display screen in the cab, misting and dirt hardly affect the system at all, even in the most inclement weather. And what is principally helpful on cold, damp days at a temperature below 15 degrees Celsius is the cameras automatically heat up. Incidentally, the heater function can be manually activated if required. 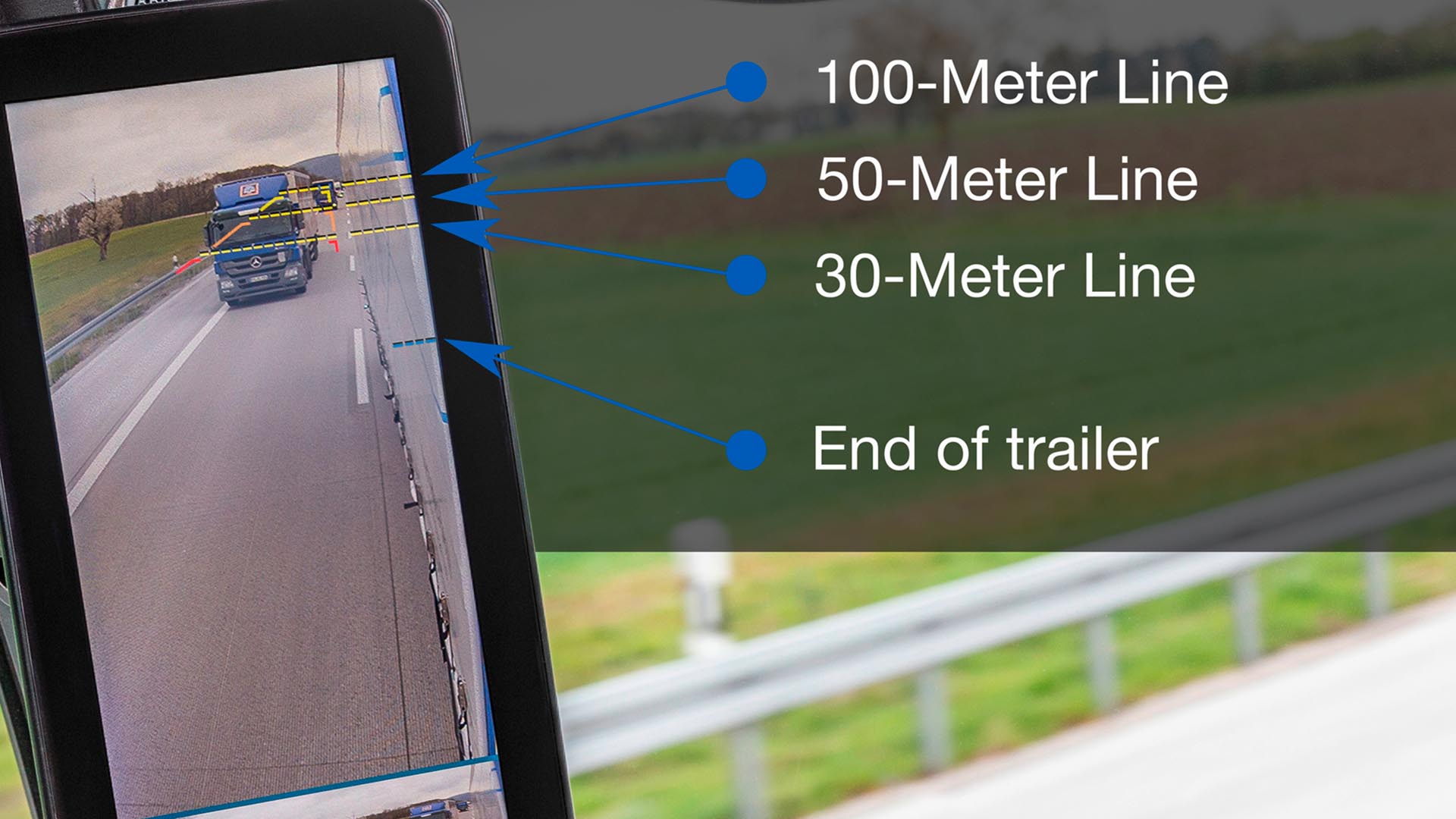 What do the distance indicator lines on the display mean?

To adjust the end of the trailer setting line:

To activate this calibration mode:

When used in combination with the information shown in the displays by the inbuilt assistance systems, the driver can now assess three typical situations in particular: when is there sufficient distance to merge into a lane or turn. Identify the space at the rear of the vehicle when manoeuvring. Finally, after overtaking, when can the driver safely move back into the left lane again. 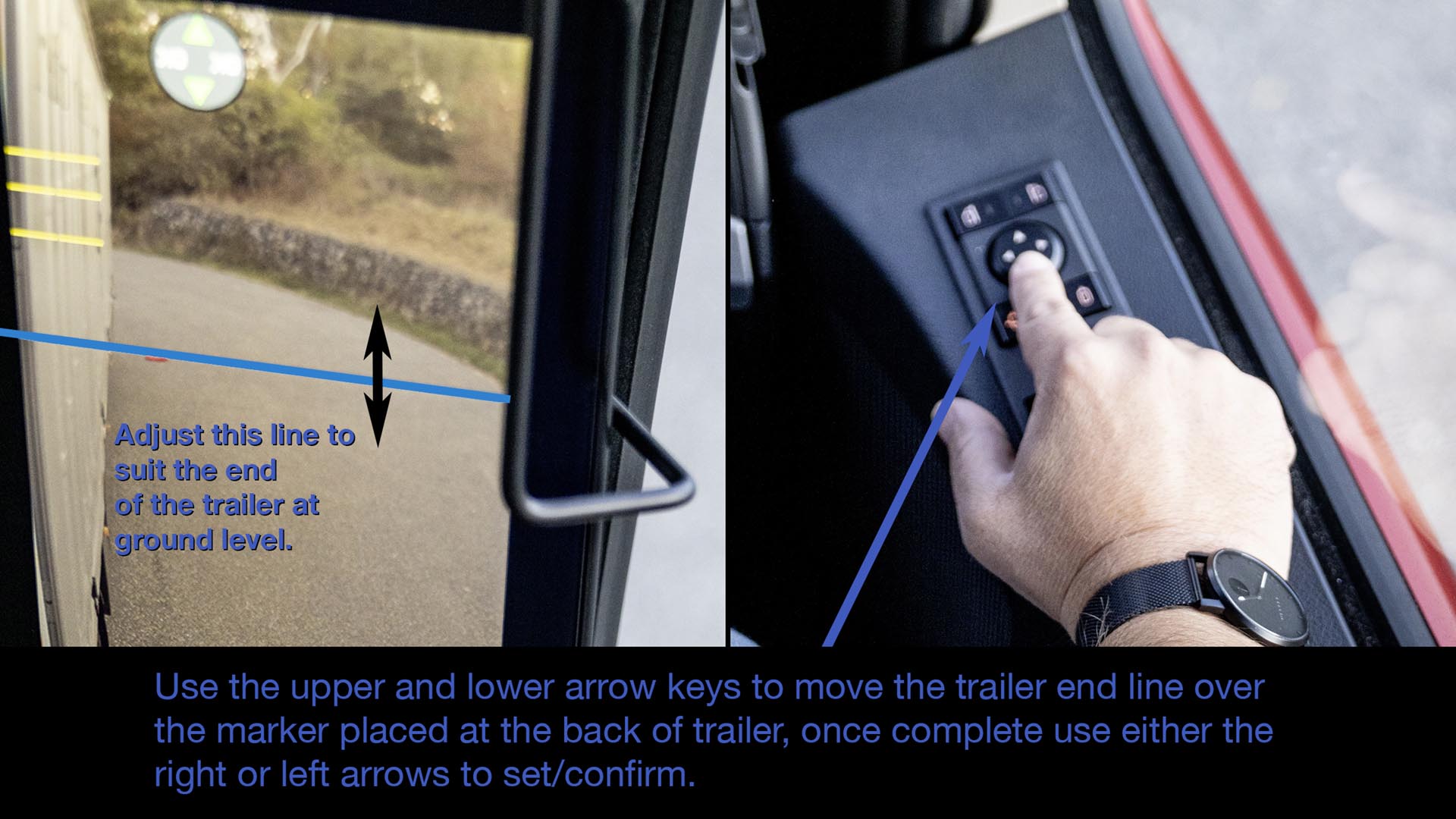 Is the camera system affected by low light at dusk or at night?

In residual light situations, for instance, at dusk, the MirrorCam provides an advantage over traditional door-mounted mirrors. The light transition from the cameras is high. As a result, the displays show an image that is much brighter than the natural light. Consequently, drivers receive better information about their surroundings than with a traditional mirror. Furthermore, the brightness is adjusted to the predominant light conditions seamlessly, so drivers are not dazzled by the screen’s brightness. All of this functionality works well both out on the open road and in tunnels. If it is entirely dark outside, the MirrorCam will only display the immediate areas illuminated by the truck itself – just like a conventional mirror. Here, Mercedes-Benz has selected a set-up for maximum image information, which currently may cause slight image noise. 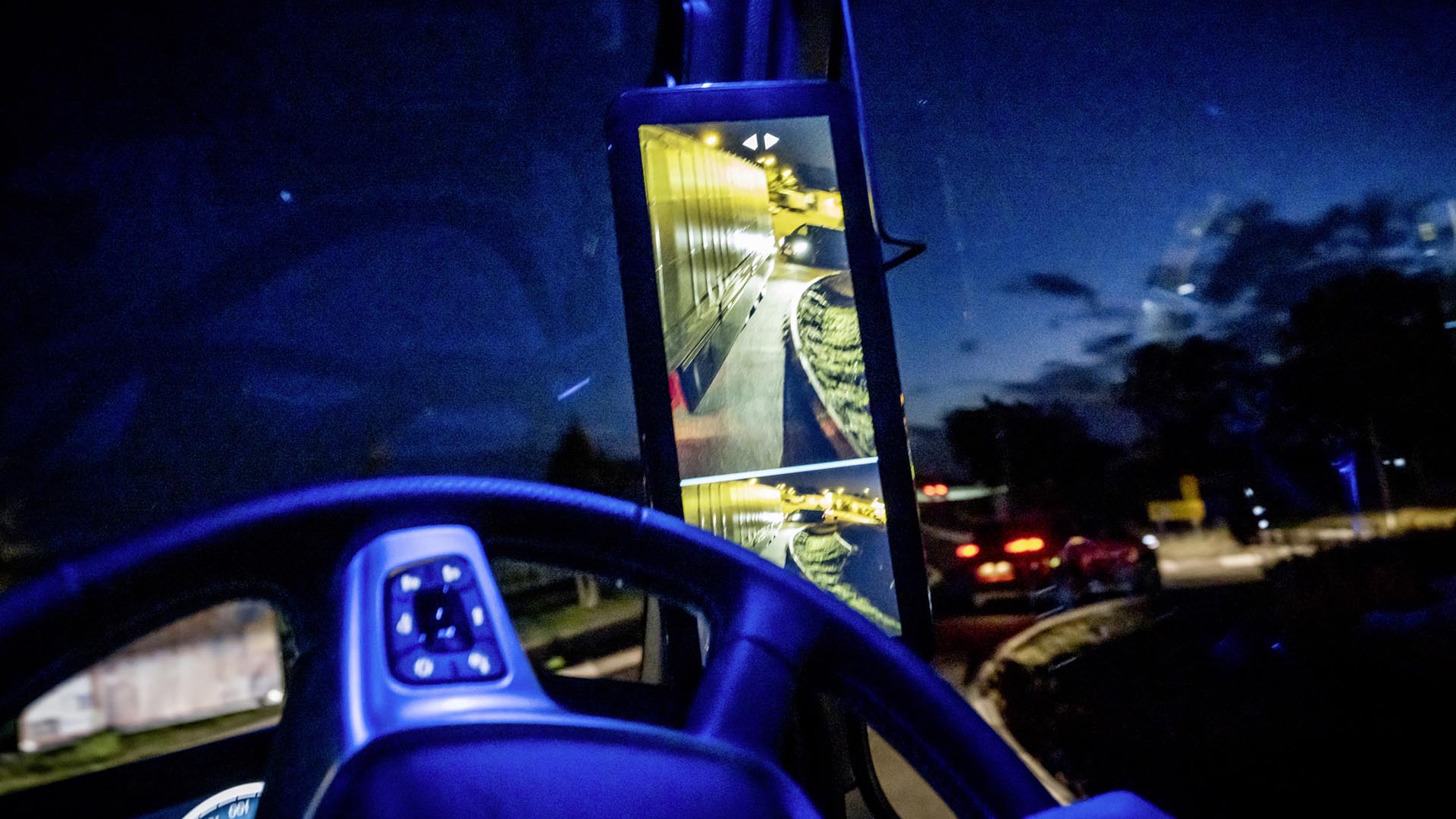 Can drivers adjust the brightness of the displays?

Certainly! Varying circumstances, weather conditions and times of day are all excellent reasons for adjusting the brightness of displays. To make this adjustment use the right-hand touchscreen display or the multifunction steering wheel to access the virtual slide controller in the menus “Display and Brightness –> Display brightness –> MirrorCam“. Furthermore, the system is clever enough to adjust the right and left side displays individually if required.

For conventional door-mounted mirrors, a simple physics principle applies: “the angle of incidence equals the angle of reflection“. Consequently, this means that whenever a driver changes their sitting position, the area they can see in the mirror changes. However, the new MirrorCam is fundamentally different. Because of the camera-screen combination location, the driver always sees the same image, regardless of the sitting position. Additionally, the field of vision can also individually be adjusted using the controls on the door operating unit. Another advantage of MirrorCam is if a driver shifts the field of vision so far as not to fulfil legal requirements, a note in the display will appear – which is not the case with traditional mirrors. A driver merely presses and holds the function button momentarily, quickly returning the mirrors to the standard-setting. 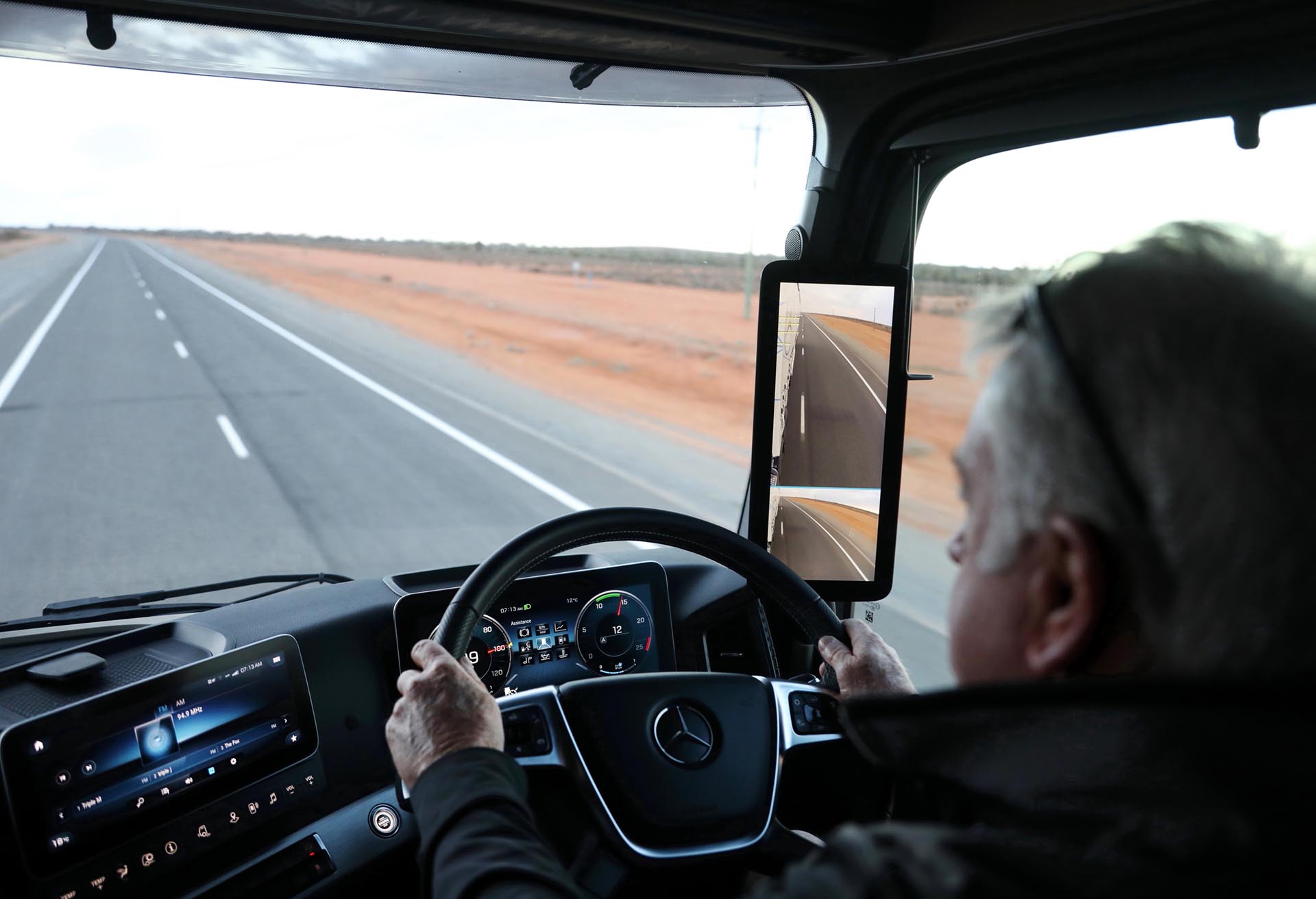 How do drivers who wear glasses or sunglasses cope with the displays?

Anyone wearing glasses can easily read the MirrorCam displays because there is no need to look as far to the left or right to see traffic to the rear, thanks to the display screen positioning on the A-pillars. Nevertheless, people who wear glasses might experience slight difficulty adapting to the new angle of distances and vision. In this situation, the first question should be: are these glasses still correct for their eyes? Variations to our vision occur gradually. Initially, this will often go unnoticed and, overtime is accepted. In the majority of cases where people wearing glasses have experienced an issue with the MirrorCam, it is usually attributed to unsuitable glasses rather than with the MirrorCam system. Regardless of whether you’re sitting at your desk or behind a steering wheel of a truck – the same principles apply: glasses must fit the workplace! Sunglasses aren’t usually a problem either. Nonetheless, how much the optical impression differs depends on the quality of the sunglasses. Sunglasses certainly have advantages and disadvantages – regardless of whether traditional mirrors or the MirrorCam is specified.

The secret to reversing in a straight line with the new MirrorCam?

The MirrorCam offers two different views when manoeuvring backwards: in the standard-setting, the larger main screen displays the area directly around the truck and the lower section, the broader surroundings. This view proves its value, notably when the driver reverses around a bend. However, if the driver reverses in a straight line, it is often better to deactivate this function. To deactivate the convex view, use the button in the door control unit. As a consequence, manoeuvring with MirrorCam offers greater opportunities in comparison to traditional mirrors. For this reason alone, the new system takes a little time to get used to. Also, because the cameras are located slightly further beyond the vehicle’s outer edges than traditional mirrors, far more can be seen than with door-mounted mirrors when reversing the vehicle in a straight line.

Consequently, this, too, requires a short period of time to adapt, but by initially glancing at both displays alternately, it won’t take long to master. When compared with a traditional mirror system, after looking at only one of the MirrorCam displays, some drivers, when reversing, initially subjectively feel that they are driving at an angle. When, in fact, they are moving in a straight line. 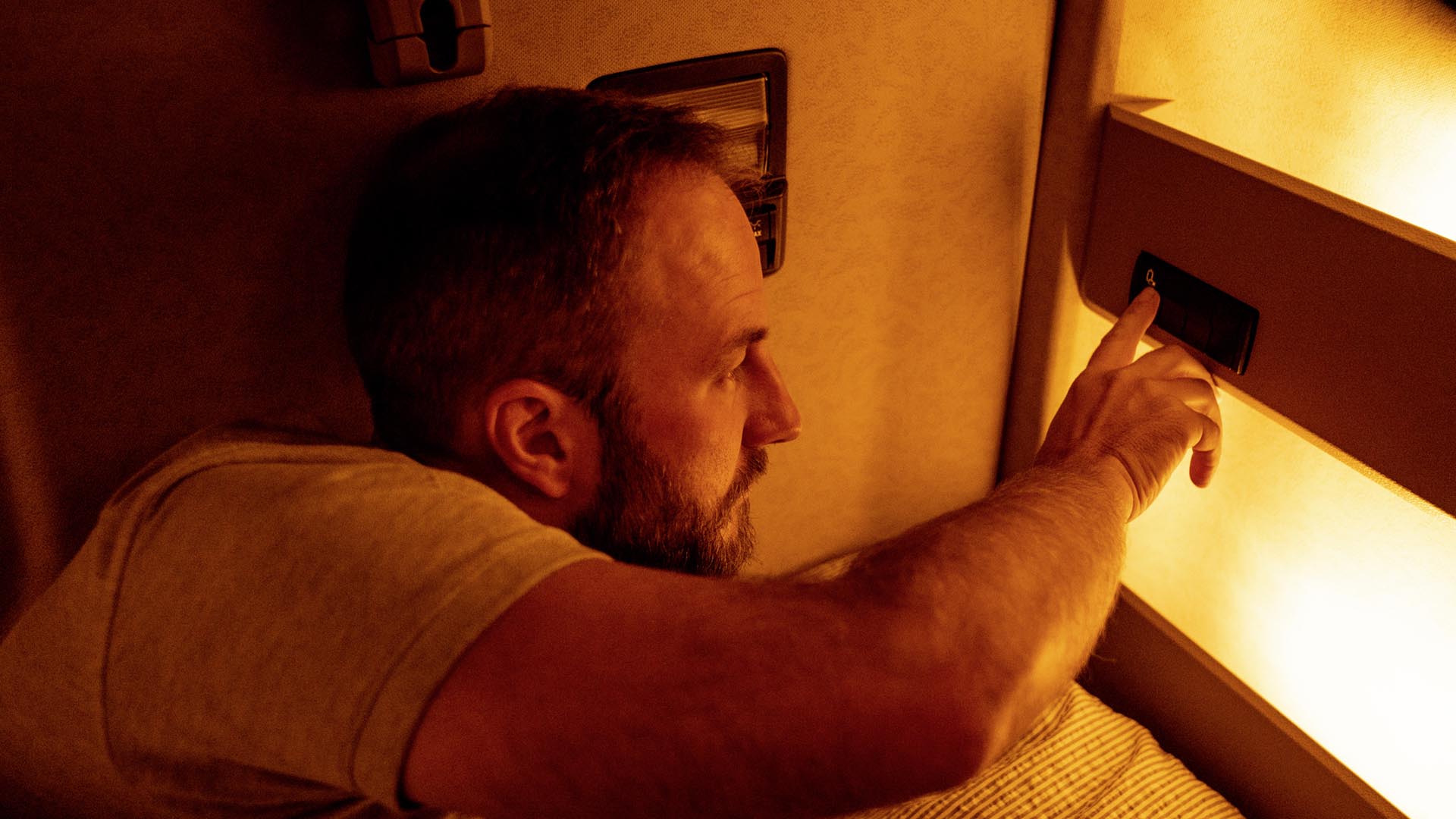 Driver’s can activate the camera system for two minutes using a switch in the bunk.

Does MirrorCam still work with the engine switched off?

When drivers take their breaks in the cabin, they can activate the camera system for two minutes using a switch by the bunk and on the co-driver’s side with the engine switched off and the cabin curtains are closed. The immediate area surrounding the vehicle is thus in view, and any suspicious activity involving the truck or its load. The MirrorCam system starts automatically whenever a door gets opened – so that exiting the vehicle is safe at all times. 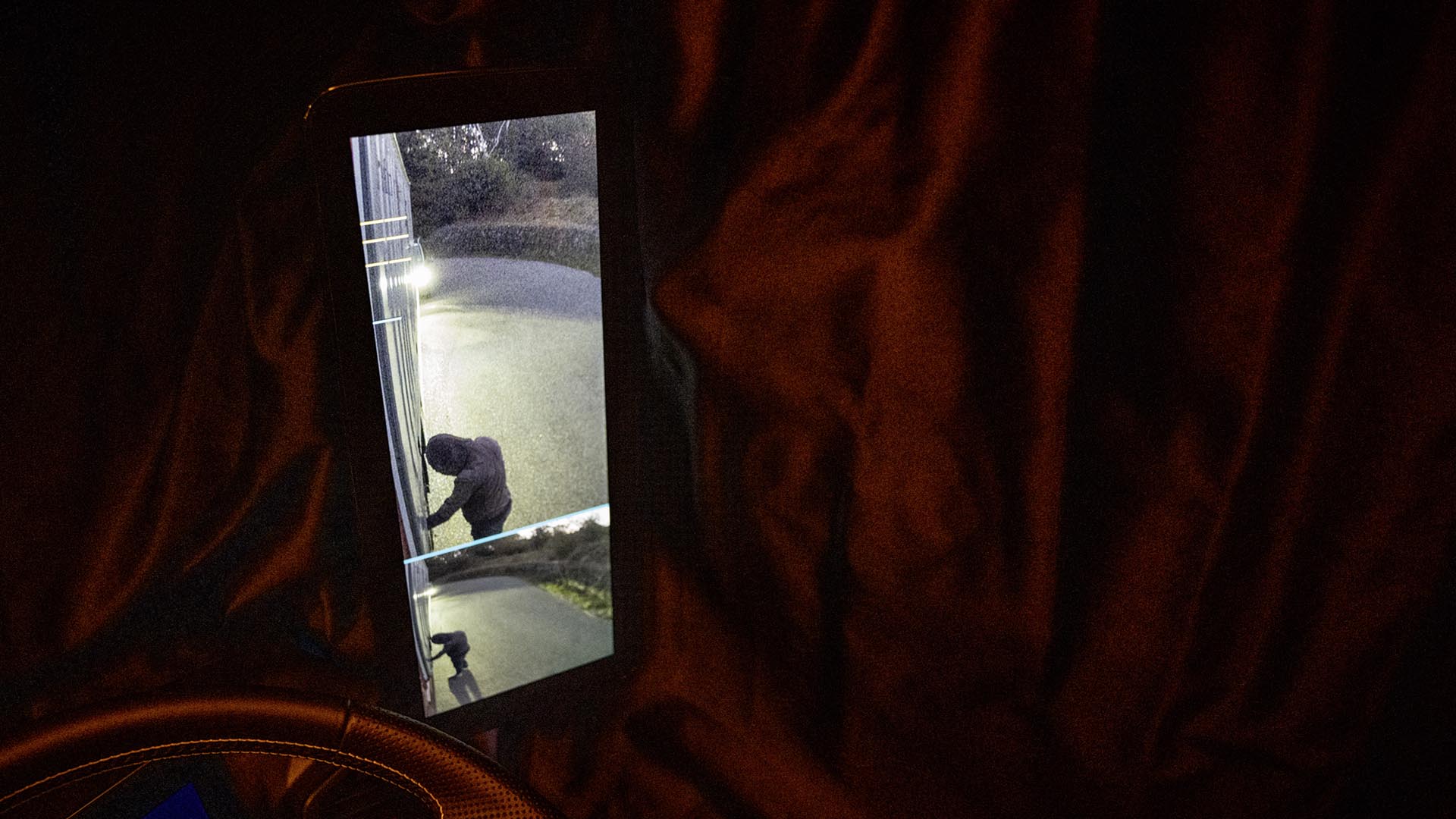 The immediate area surrounding the vehicle is thus in view, and any suspicious activity involving the truck or its load.