Fuel economy is by far the biggest standout feature from the new Actros 2658 6×4 as Howard Shanks discovered on a recent test run from Sydney to Melbourne. 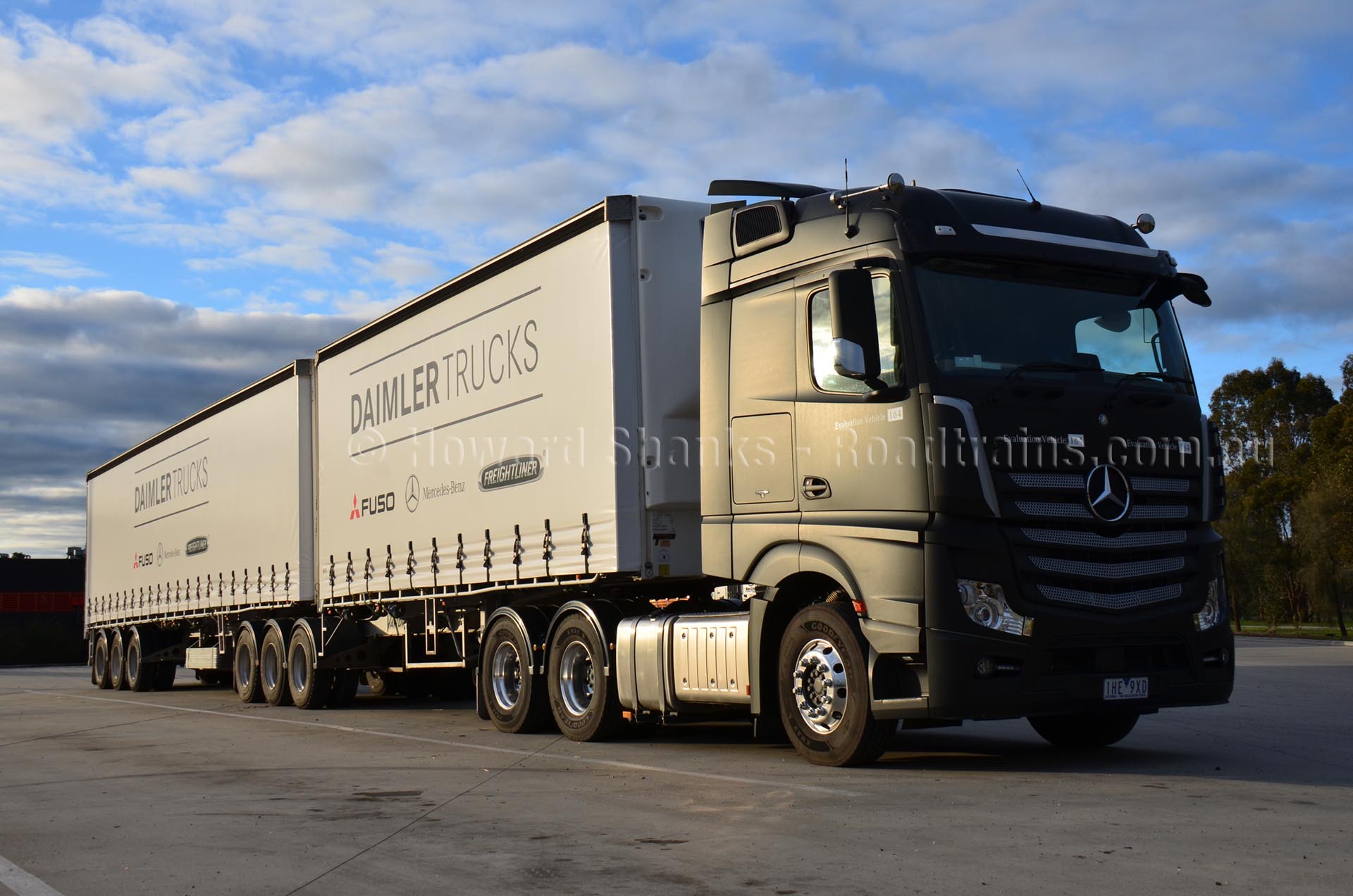 A bleak cold winter morning with artic wind gusts greeted Daimler Trucks National Fleet Sales Manager, Simon Swan and myself as we stepped from the taxi in the predawn darkness at the Huntingwood dealership.

“The truck is parked around the back of the workshop,” Simon gestured in the direction of the large roller doors. “We can cut through workshop but stay in the yellow lines,” he added.

All wrapped in black, the new Actros 2658 StreamSpace cabin towered above the rest of the trucks parked in the lot.

“The first thing you’ll notice with the 2658 StreamSpace cabin is much wider at 2.5 meters,” Simon began. “It has the flat floor so there is plenty of room to move around in the cabin.”

The overall stance of the Actros is dynamic and muscular. The imposing grill is traversed by five horizontal stripes while the three pointed star takes center stage and dominates the flat front.

The side view is also very catchy as there is a beautiful flow between the front section and the flanks. I was particular impressed by the bumper, door wind deflector and the entrance as they merge seamlessly into one another to form a single unit. Simon informed that most of the exterior modifications were made to improve the truck’s aerodynamics and that the Actros was highly tested in the wind tunnel. Thanks to the aerodynamic design the overall efficiency has also improved significantly over the previous model. 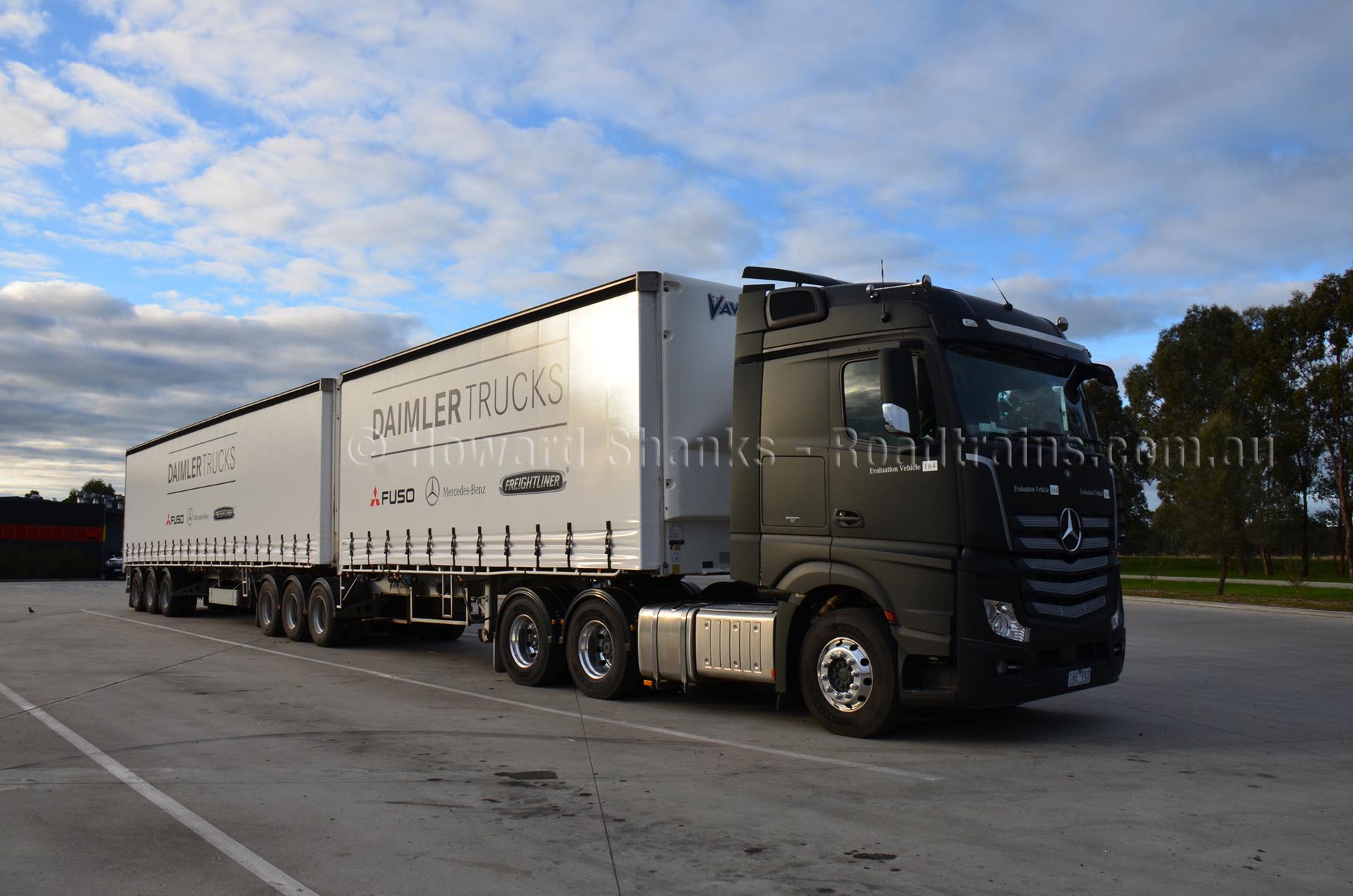 Hop inside and you’ll find one of the best-kitted European truck cabins available on the market. There is also a ample space inside and thanks to the flat floor, the driver can move through the cabin effortlessly. To maximize the ergonomy, the dashboard features a wrap round design and is fitted will all the necessary controls, which are within easy reach and have a logical layout.

The instrument panel design, materials and layout are class leading. When equipped with all the “toys” of the superior trim levels, the truck’s ambiance is impressive, with big, clear gauges, an uncluttered center stack and tasteful trims spanning the dashboard. Combine that with the classy leather, complete with contrast piping, and you’ll see why this Actros cabin is nothing short of excellent.

The functional area of the cockpit is finished in practical anthracite whilst the rear, ceiling and area around the co‑driver’s seat are appointed in a light almond beige colour.

The bunk in this Actros was equipped with a full inner spring mattress, however on this express run to Melbourne there was no time to try out the bunk. 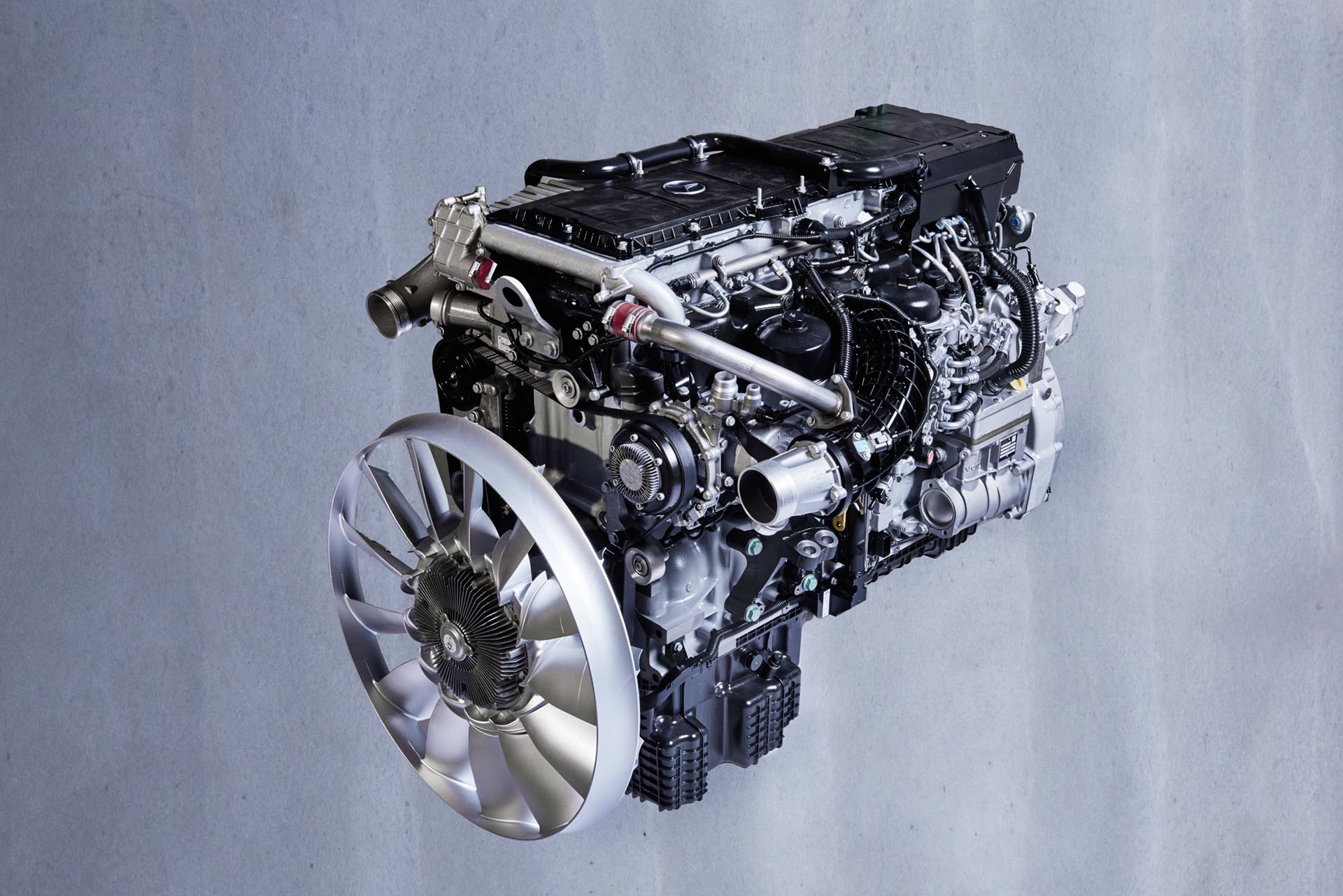 Under the cabin, is the all-new OM473 16 litre in-line 6 cylinder engine, that is built off the same base as the Detroit DD15 family, which features in Freightliner and Western Star models, sharing much of the same block but featuring a unique head, turbo and other elements.

The new OM 473 uses turbocompounding – essentially a second turbine located downstream of the exhaust gas turbocharger. It uses the exhaust gas temperature that is maintained after the gas has flowed through the main turbocharger. The power is transferred via a shaft and a hydrodynamic clutch to the engine’s gear drive and thus directly to the crankshaft.

The engine has a ribbed, gray, cast iron block; the head is made from compacted graphite iron (CGI) and uses 38 clamping bolts to handle cylinder pressures of more than 2,900 psi. The single-piece pistons are made of steel and travel inside wet cylinder liners, and the gear drive is mounted in the output side of the engine. It turns hollow dual overhead camshafts made of composite materials to minimize rotational losses.

The six-hole injectors are controlled by the Mercedes-Benz X-Pulse system that continually adjusts events for each cylinder using “rate shaping” techniques. These operations change the injection timing, amount, quantity, and pressure based on operating conditions to maximize the power delivery, fuel mileage, and durability of the heavy-duty OM 473 in all driving conditions, ranging from gridlock to steep grade climbs

Getting all this power to the back wheels is the task of Mercedes-Benz G281 Powershift 3 automated manual transmission, 12-speed direct drive. These are upgraded versions of the already successful transmissions of the previous model. These new ones are tweaked to offer a faster and more precise response. On the road, the automated transmissions are a competent ally and require a minimal amount of intervention.

The rear axles are Mercedes-Benz 440-hypoid drive, which have been running successfully in previous models. This particular Actros came with long legs 2.533:1 specked for optimum fuel economy. 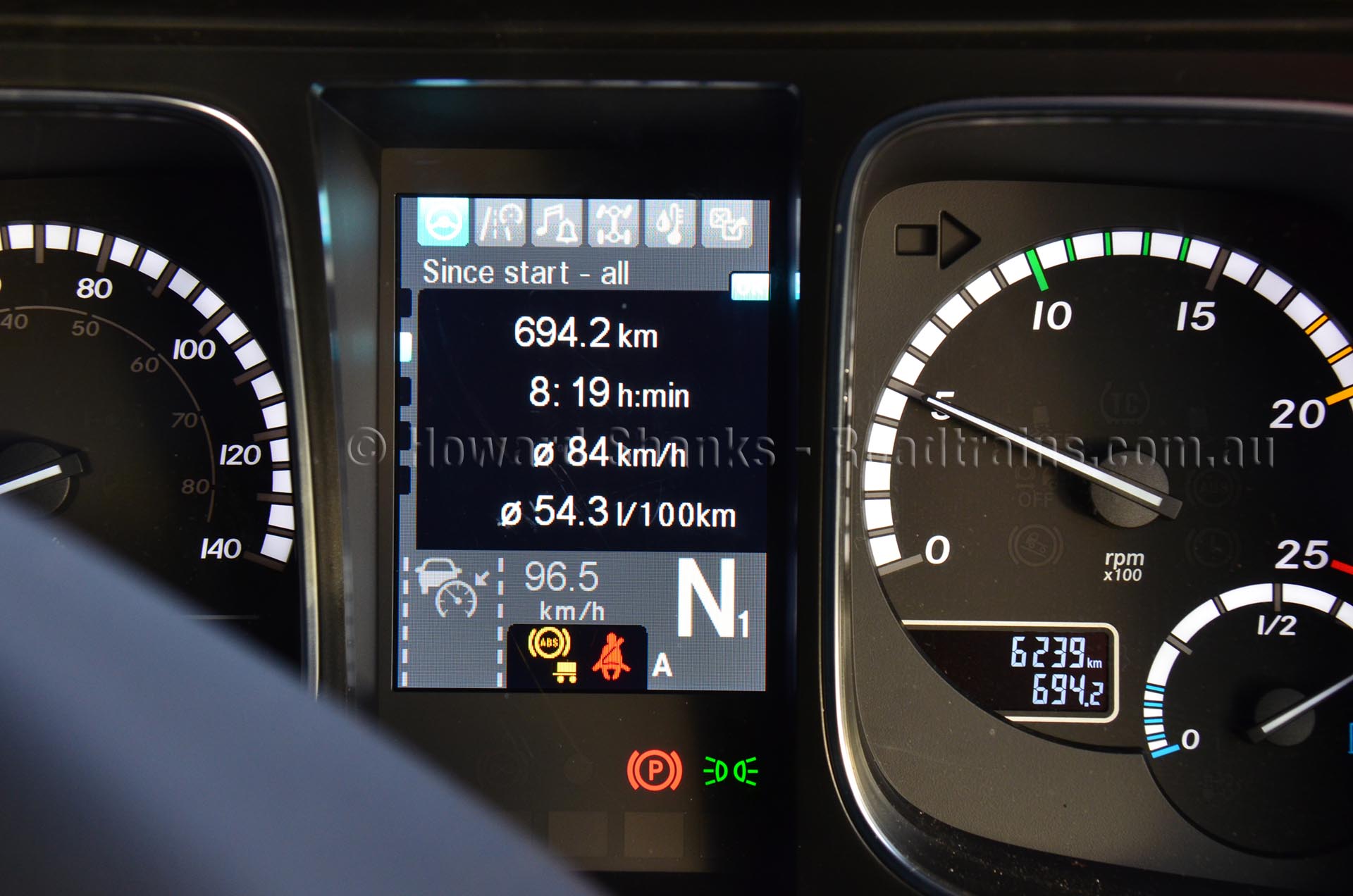 The brains of the new Actros are incredibly clever and take most of the mundane tasks out of the job, for instance the truck is permanently kept in check by a host of high tech electronic nannies which include the adaptive cruise control, Lane Keeping Assist, Stability Control Assist and the revolutionary Active Brake Assist with autonomous emergency braking when stationary obstacles or moving obstacles ahead are detected. In fact, there is now no need to lift the grill to perform daily checks. The interactive dash display shows how much oil is in the engine and advises of its viscosity.

Before setting off, Simon gave an overview of the controls and functions and how to navigate through the interactive display using the buttons conveniently located on the steering wheel.

We set up the adaptive cruise control, which uses a front mounted radar to monitor vehicles proximity, in the event the vehicle in front slows down the Actros automatically slows as well. The range can be adjusted easily to suit either stop start city driving to open country road style.

But more on the interactive display later. 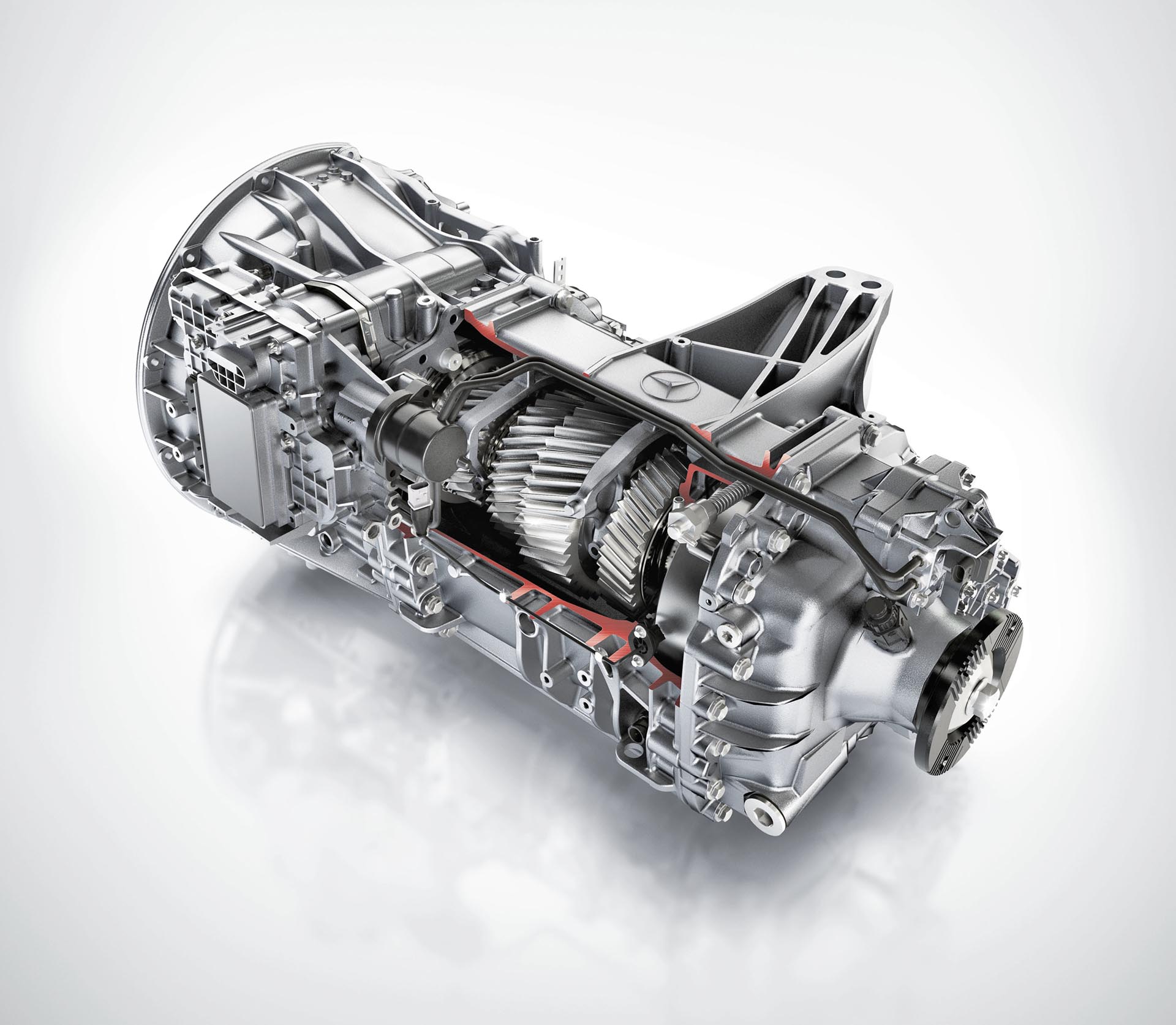 After locating the B-Double trailers (loaded to 58 tonne) and connecting them up, then dropping into a truck stop around the corner to top up the fuel tanks it was time to head out of town.

There is no question that the vision out of the Actros is first class. The addition of wide mirrors gives terrific rear vision and in addition these can be moved in small increments for reversing.

The ride in the cabin is first class. There is virtually no engine or road noise. This truck was fitted with an onboard fridge located under the bunk that can be accessed easily while driving.

Simon explained that in Europe, Mercedes-Benz trucks are renowned for their economy and consistently lead the heavy vehicle market in fuel economy. “In 80 percent of the fuel consumption comparisons we are number one”, he explained.

Sometime back I’d read a report where a 2648 Actros, (the V6 476 HP model) pulling a single trailer loaded to 37 GCM, did a similar trip with an experienced driver, – short story is the average fuel economy was 2.2km/l. Not long after that trip another was scheduled in the same truck and load only this time some driver training had been given. It boasted at the time an average trip speed of 80.3km/h with a total trip time of 11.2 hours with 2.53km/l. Needless to say a marked improvement in fuel economy.

Now I told that story to paint a picture of just how efficient this new OM473 powered Actros is, and also to reiterate how important proper driver training is and how much it can save.

Click on the image below to learn how to watch Mercecdes-Benz Actros driver training videos.

On the run from Huntingwood to Tarcuta, we drove the Actros as any normal experienced driver would. The fuel economy on this leg was 1.7km/l which given the load and horrific side wind we considered to be reasonable.

After the lunch stop at Tarcuta, we made a few alterations to our driving style and set up the Actros’ “ECOROLL” function to operate through its maximum parameters. From the outside there was no noticeable change, the big Actros was keeping pace with the traffic flow and rolling along like it had in the morning. However in the driver’s seat, the changes were instantly noticeable, with the fuel economy really improving. The fuel economy for the Tarcuta to Somerton leg was 2.1km/l, a massive improvement of 0.4km/l without sacrificing trip time.

Overall trip statistics, 826km in 9.33 hours with an average speed of 87km/h. If you recall the story I told earlier, it paints a very good picture for the new OM473 Actros and really validates the information Simon explained about Mercedes-Benz economy and efficiency. Yet it also brings home the importance of driver training as each engine and driveline from all manufacturers has particular peculiarities.

What do all those number mean? Firstly that driving economically does not penalise trip times. Secondly, if you can save 0.4km/l in fuel it roughly translates to saving half the truck’s payment in fuel costs per month.

Low cost of ownership is the key focus on the new Actros range, and Mercedes-Benz say the improved reliably of the truck along with extended service intervals mean that their service-maintenance contracts will be very attractive packages.

The new generation Mercedes-Benz Actros moves the German reliability heritage further. The truck’s cabin is more comfortable than ever and the Euro 6 engines are a strong statement for the Actros efficiency and are arguably the most efficient Euro-6 style on the market at the moment . The exterior design is also modern and sleek, as well as the Actros is available in a wide range of configurations. 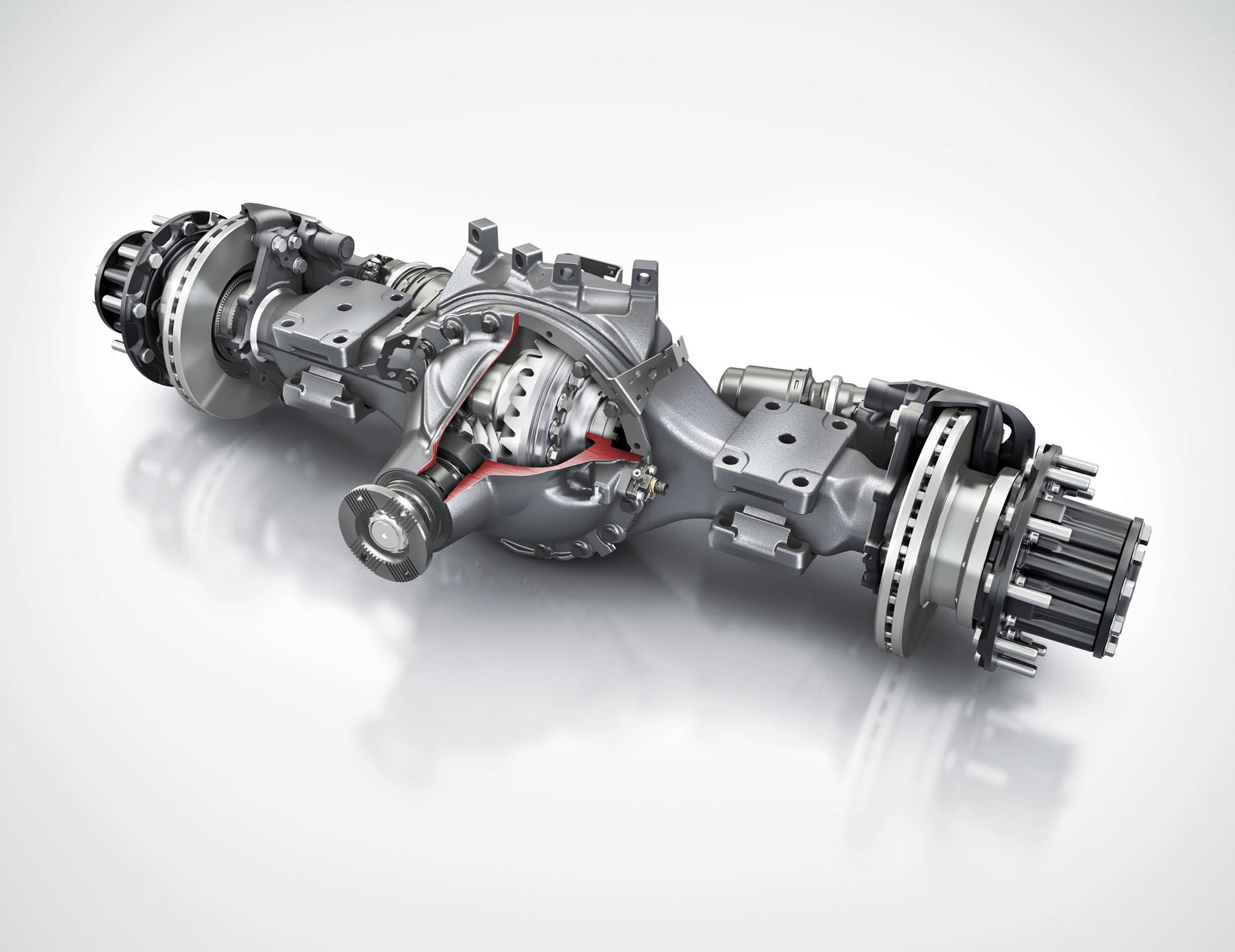