Regular readers would recall that we’ve reported on several tri-drive units operating in high productivity heavy road train applications over the last few years. Truth be told, the site of a tri-drive or “tridem” road train with four to six trailers in tow is indeed an impressive sight. Their daily payloads undoubtedly would have made the record books not so long back. But is this pioneering a new road train era? Some think so. 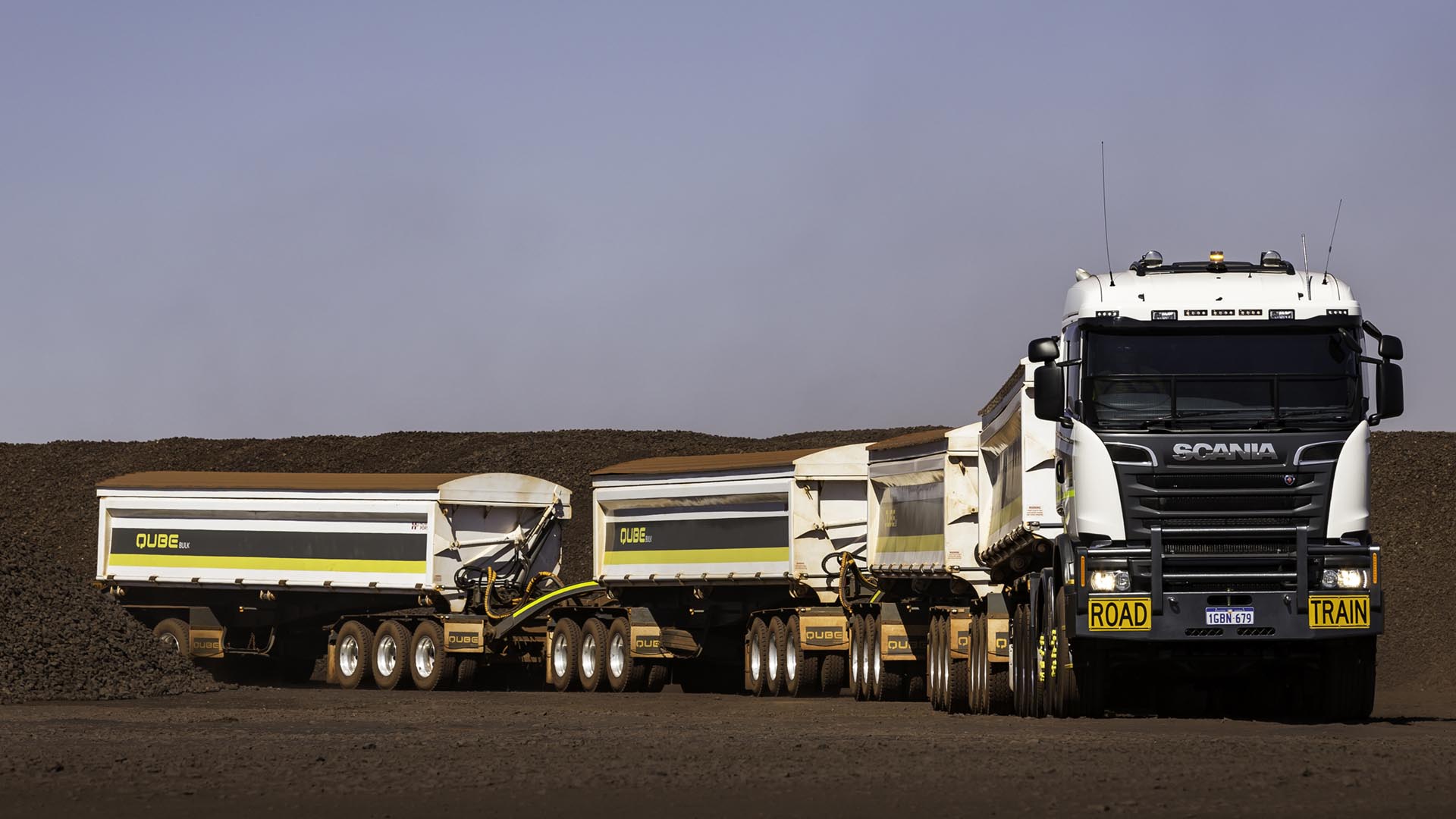 We sent our technical editor Howard Shanks to investigate one Scania truck that utilises a different approach to the traditional tri-drive concept by using bogie drive heavy-duty hub reduction rear axles with a lazy tag axle to make up the tri-group. So, we asked, what are the benefits and how does the hub reduction rear axle work?

A decade or so back, increased weight limits on tri-axle groups in Western Australia sparked the tri-drive concept for road-going trucks, which saw engineers scribbling frantically over their drawing machines to get a new product to market. Many operators questioned how hard it could be to lengthen a chassis and slot in another drive axle? Many company GMs, Accountants and Marketing Managers agreed. But back down in the engineering department, they were busier than ants at the Moomba day picnic. The larger payloads demanded increased power to propel the heavier loads. In addition, vastly different gearing and heavier-duty drivelines were needed to meet stringent gradeability and startability requirements. 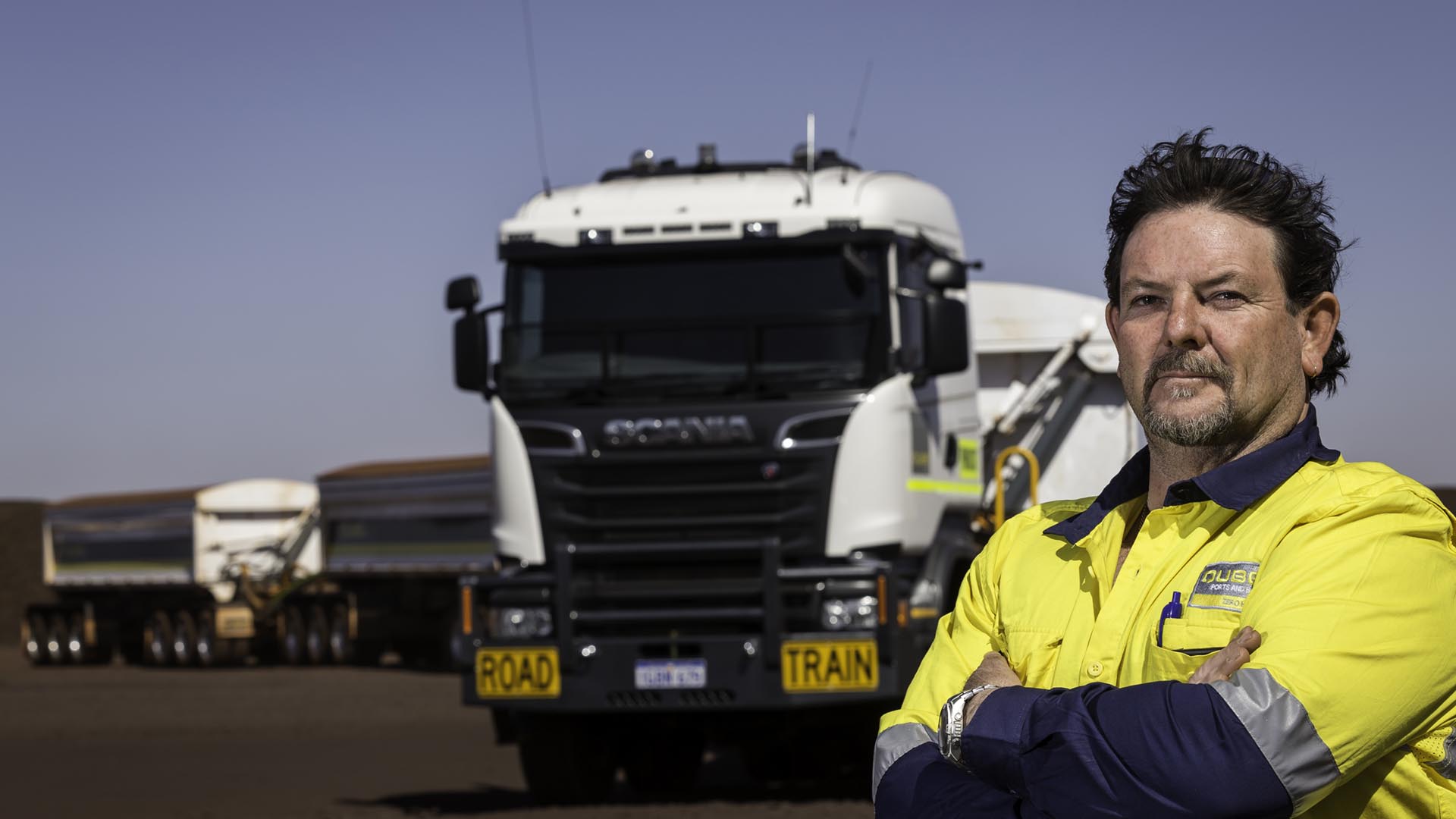 If you’re as old as me by some chance, you’ll have probably played with an old manually driven Meccano set as a kid. On the other hand, if you’re my son’s age and like machinery and trucks, the Meccano set you’d probably have used would be a little more modern and include electric motors and remote control. Trucks are very much like a Meccano set. Scania engineers know this too well and have designed Scania components to integrate, with one another, much like a Meccano set. Thankfully for truck specialists, like Scania’s Mining and Resources Division General Manager Robert Taylor, when Qube enquired about a prime mover to haul their latest Super-Quad, Robert merely searched through Scania’s extensive components catalogue. He selected the parts that best suited the design application to produce the R730 10×8 Super-Quad road train.

To better understand how this process works, take a look at a few of the options in Scania’s XT range of trucks. When an operator purchases their new Scania, they first choose one of five models then select their preferred cabin, High, Normal or Low. Then, based on their application, they choose an axle configuration, an engine, transmission, and so on until they have a truck that meets their needs, much like a Meccano set. 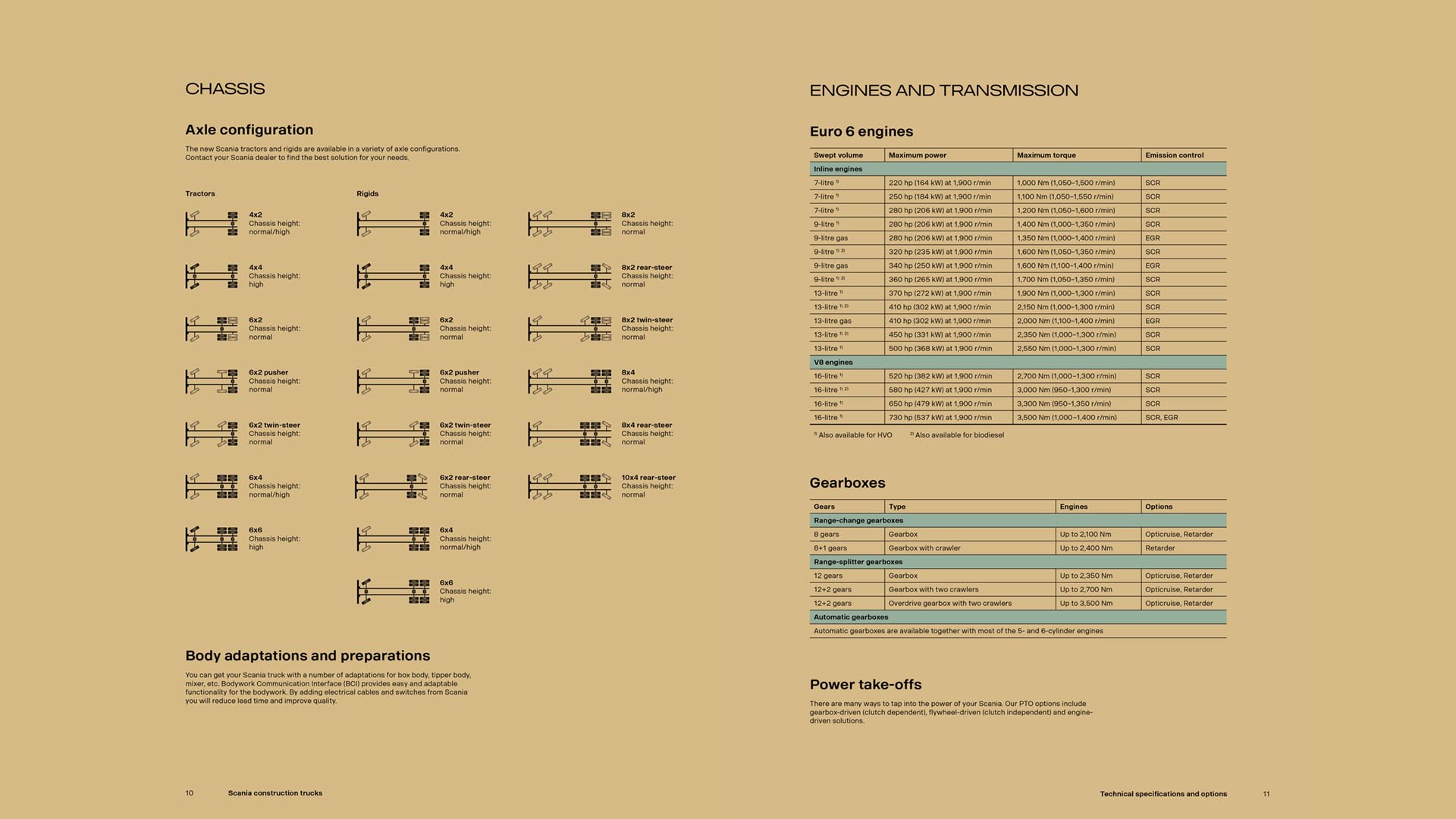 But let’s rewind the clock a few years. The success that those original first tri-drive units operating in remote regions generated was overwhelming. They indeed delivered significant efficiencies as over the road movers of large quantities of bulk product and favourable acceptance from local regulatory bodies paved the way for their broader spread utilisation.

However, the ongoing success of heavy-duty tri-drive units eventually paved the way for a more fuel-efficient tandem drive lazy axle configuration that afforded the same axle group weight limits as a tri-drive. Yet this new tri-group variant offered additional benefits such as fuel saving because the power required to drive two differentials is far less than needed to drive three. Furthermore, there’s a slight payload advantage as the lazy axle option is lighter than a driving axle. 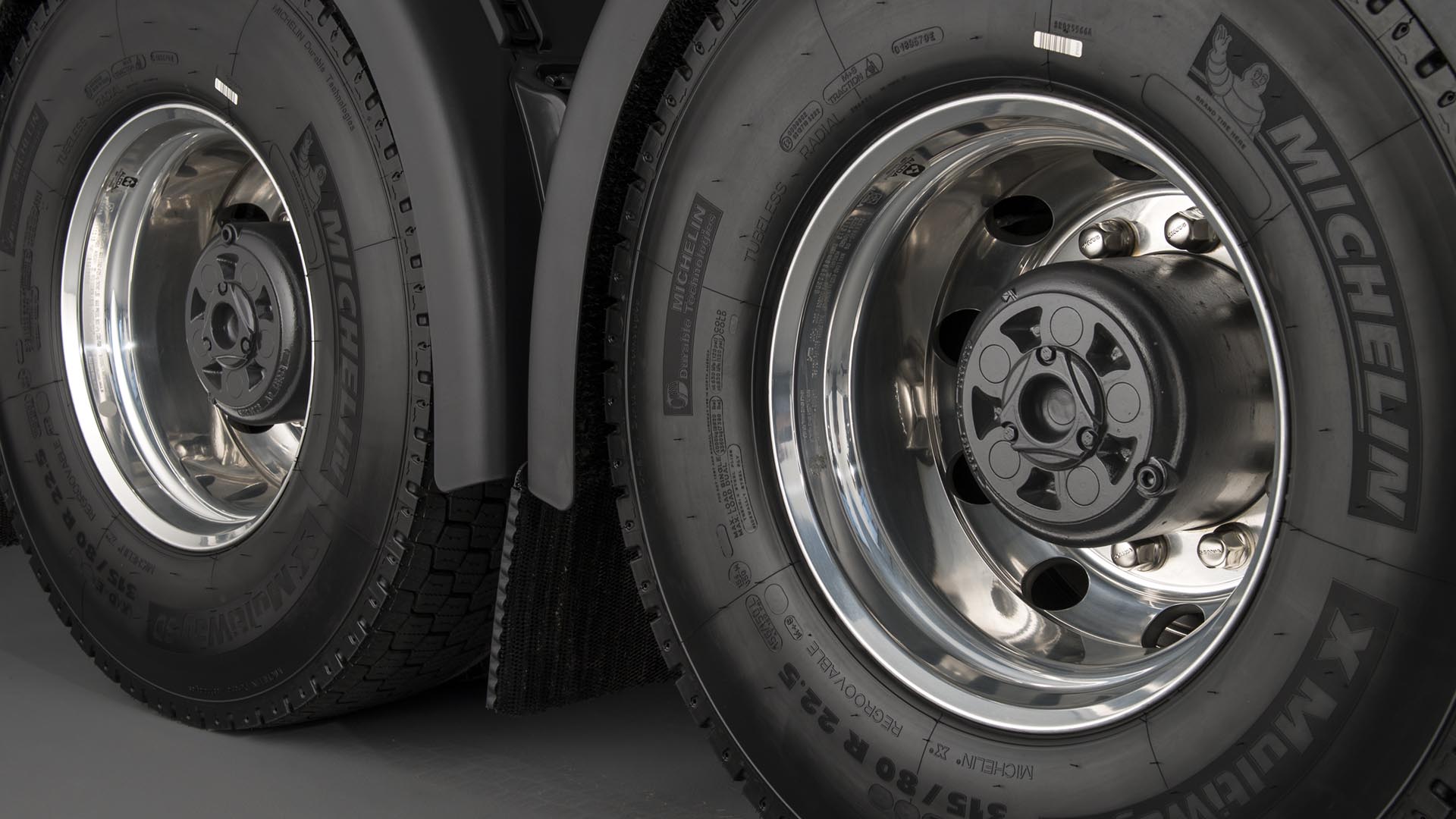 The 10×4 Scania hauls bulk iron ore around the clock from various mine sites to the shipping terminal at Port Hedland.

“This Scania operates around the clock six-and-a-half days a week,” Todd Emmert, Director of Qube Bulk, said. “Some of the mine sites are 450 km from the port. We anticipate our Scania trucks to clock up close to one million kilometres in the first three years of their working life here in the Pilbara.

“One of the benefits of the higher payload is ultimately reducing the number of truck movements on a given piece of road. In addition, reduced interactions between cars and trucks, and having trucks with higher levels of safety will all combine to make these roads safer for all road users,” Todd added.

“Scania has accumulated abundant mining services experience worldwide, particularly in the harsh, remote Australian outback,” Robert Taylor continued. “We continue to work closely with many mining operators to offer reliable products with the flexibility to take advantage of payload improvements under PBS.

“What we have learned has improved our customers’ product and operational experience, and we are confident that even one million arduous km of operation for this configuration will not trouble this very impressive V8 powered 10×8 prime mover,” Robert smiled. 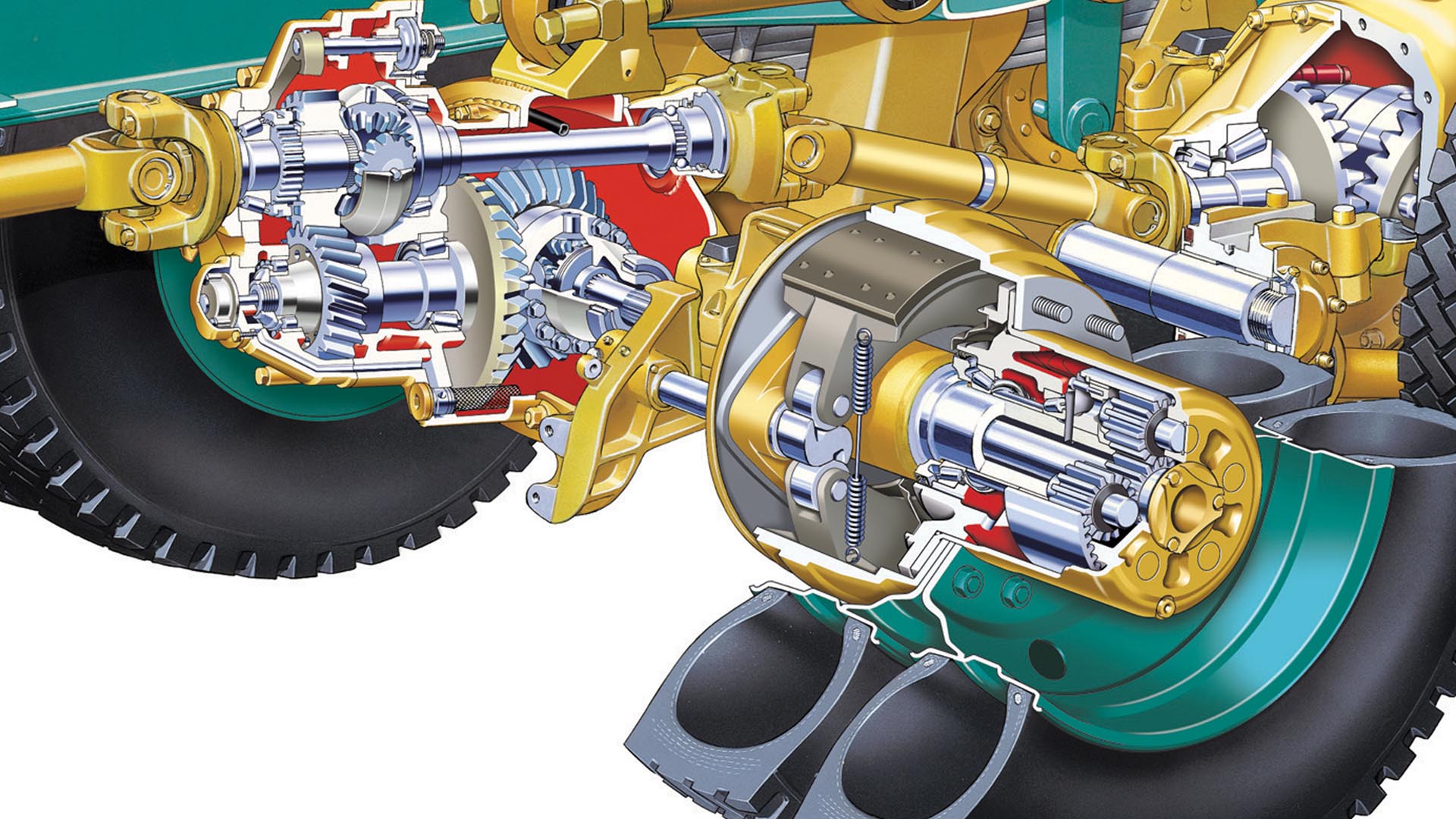 One advantage of a hub reduction or planetary drive rear axle is that the input torque gets reduced twice. First in the differential centre and then through the planetary drive wheel ends. Another advantage, especially for trucks like this Scania that operate out of mines and quarries, is the high ground clearance. In the case of the Scania, it has 322mm ground clearance at the diff centre. The double reduction process means a smaller diameter crown wheel is required compared to a single reduction diff typically found on a highway truck.

The principle of how a hub reduction axle operates is essentially the same regardless of the brand. First, power from the engine enters the power-divider head, where the transfer gear distributes driving torque evenly between the front-rear and rear-rear axles. This is achieved because of the differential in the power divider head unit. Next, the torque is transferred partly by a cylindrical spur gear to the front-rear axle’s main diff centre and partly through the transfer gear’s output shaft to the rear-rear axle’s main diff centre via the jackshaft. 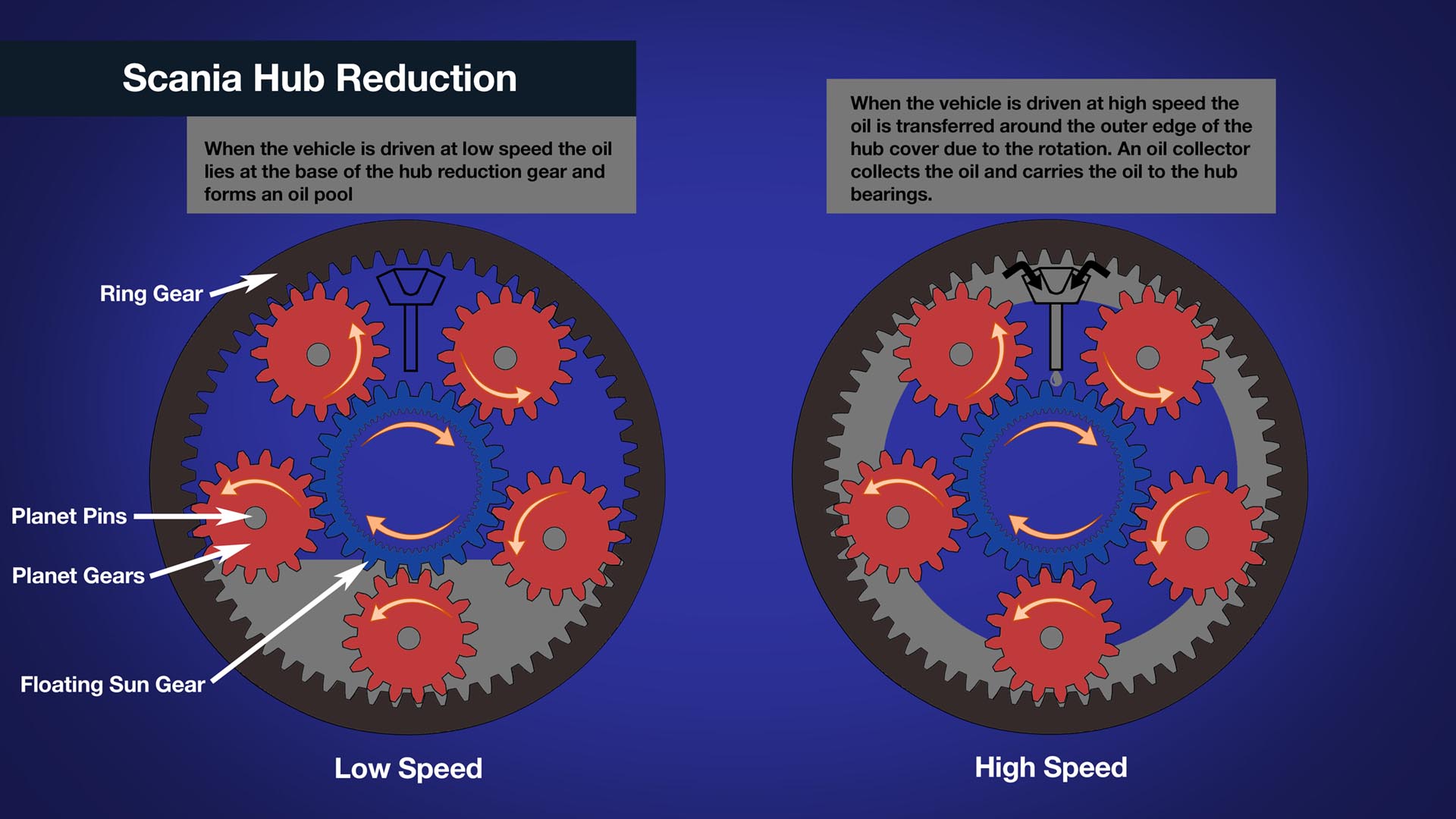 Nearly all hub reduction rear axles include a power divider lock which positively connects the two rear axles together to ensure each axle equally receives 50 per cent of the torque. The main rear axle lock fixes the left and right axle together. Once the locks are engaged the two axles work as one solid axle to ensure each wheel receives an equal share of torque. When the diff locks are engaged, all wheels rotate at the same speed, and consequently, the steering characteristics of the truck is affected. Typically, diff locks are made of specially hardened steel dog clutches that the driver activates through a dash-mounted switch. The Scania truck has two lamps in the main centre dash to indicate when the diff and power-divider locks are engaged. 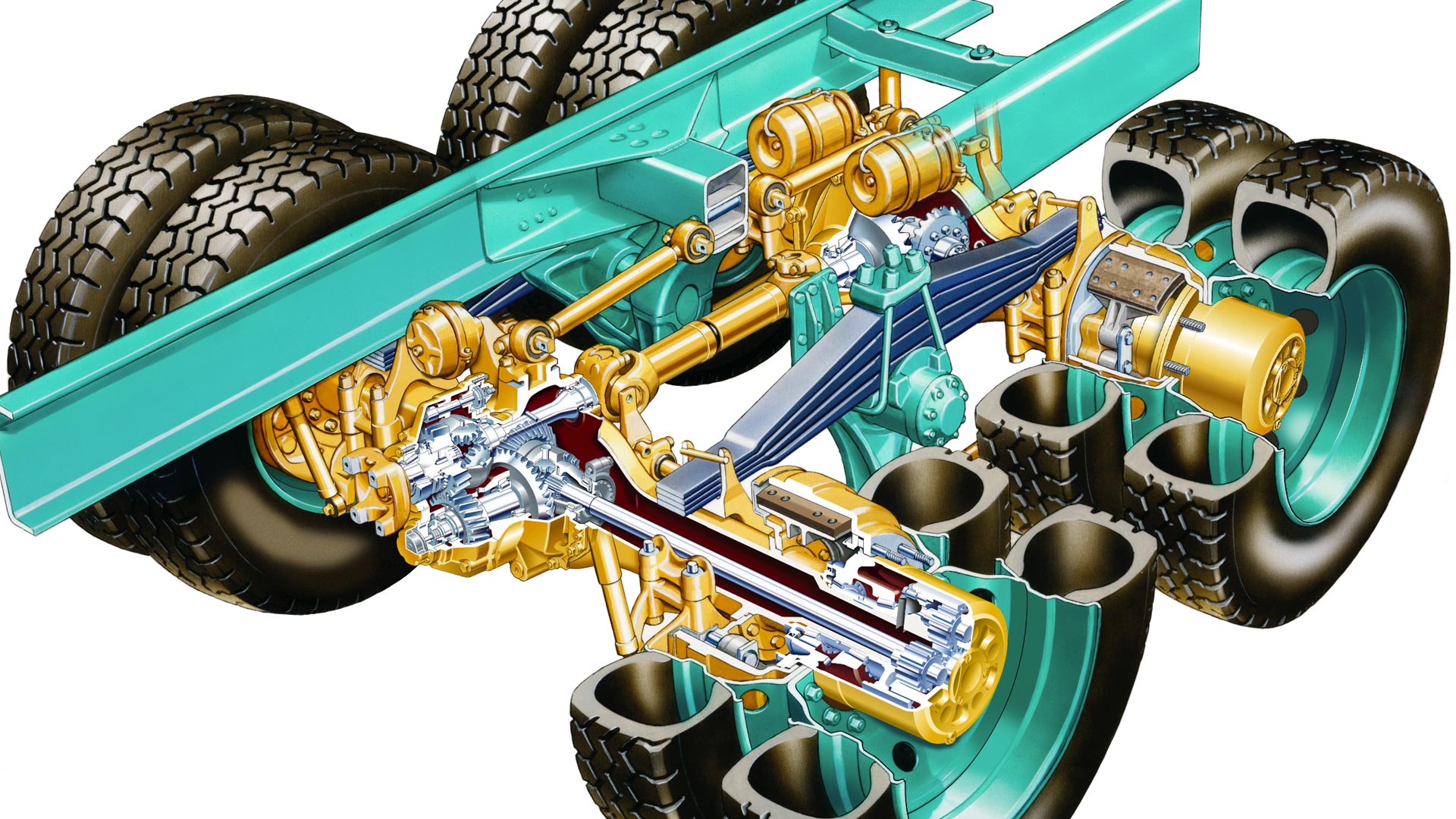 A word of caution here, while the axle’s diff lock function promises excellent traction through slippery surfaces, it is crucial to maintain a speed of less than 30kph. It’s also essential to ensure that none of the wheels are spinning before the diff locks get engaged.

However, if there is a disadvantage to hub reduction rear axles, it is their tare weight penalty and why they’re very rarely specified on a highway truck. And they do require more power to drive than single reduction rear axles, so it’s a double whammy on fuel economy and payload for a highway truck. And, for goodness sakes, don’t abuse them. They are extremely expensive to replace. But if you’re serious about heavy haulage, they’re a must.