The sale of all 75 Limited Edition Legend 950 Kenworths, a model known for its tenacious appetite for hard work and unprecedented reliability in rugged Australian conditions, in a little under 48 hours clearly demonstrated how passionate Kenworth enthusiasts were about a model that played a significant role in the growth of many of their businesses. Howard Shanks investigates one such Legend. 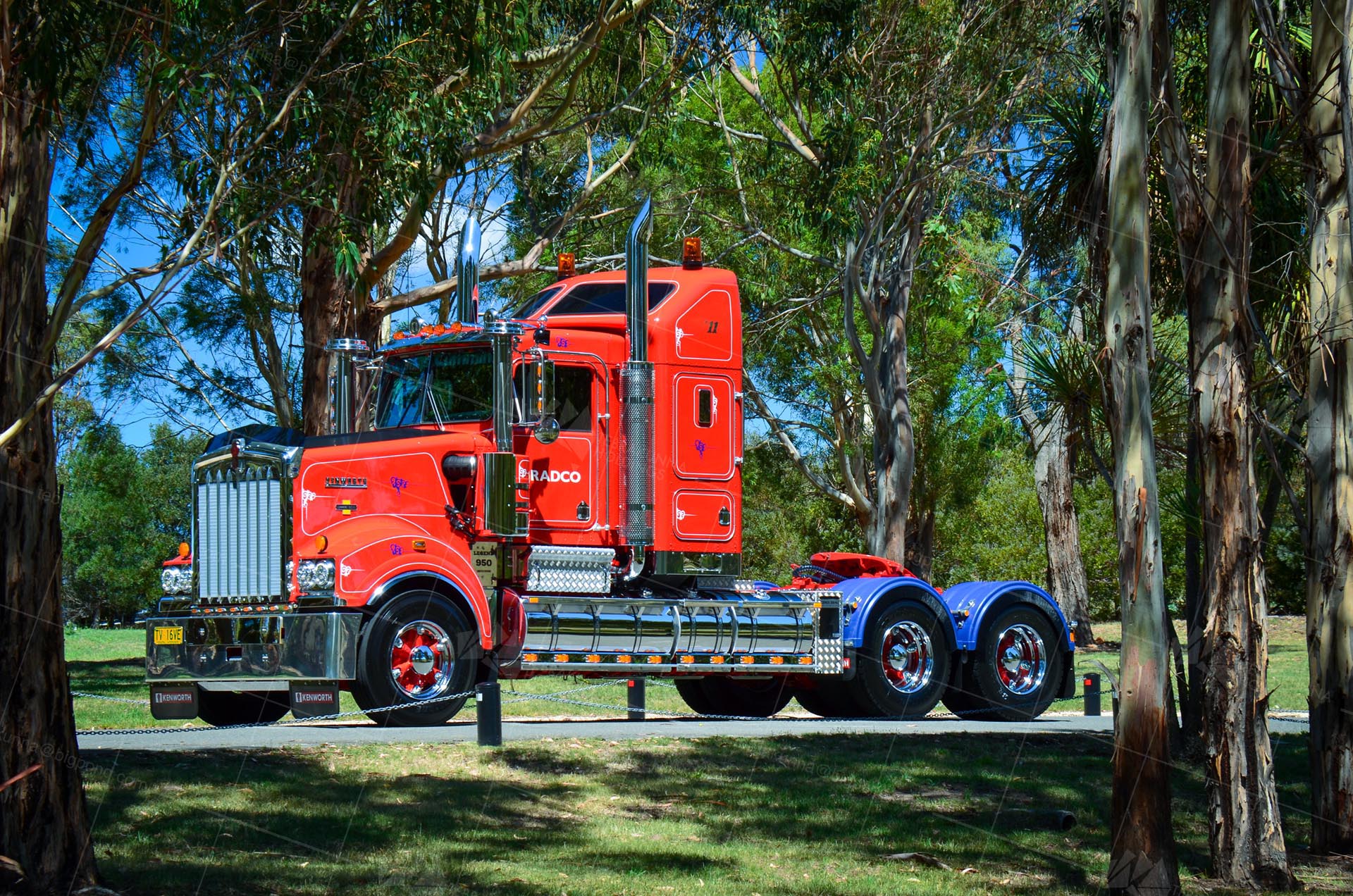 Late one February afternoon Daniel Rice, Dealer Principal of CJD Equipment, Launceston phoned. After passing the usual pleasantries he suggested that if I was passing by the recently restored Entally Lodge in nearby Hadspen the following Wednesday around 4 pm I should drop into the handover of Gradco’s new Limited Edition Legend 950 Kenworth.

“By the way bring your camera,” he added as he concluded the call with a “See you there.”

The following Wednesday morning arrived revealing dark nimbostratus clouds off in the western sky. They menacingly threatened to break the drought that was embracing the state. No doubt a welcome relief for the struggling farmers but not what was wanted when you’re endeavouring to hand over a prestigious new vehicle. Thankfully though, by mid-afternoon, a clear blue sky greeted Daniel as he drove the immaculately detailed Legend 950 out of CJD’s workshop and onto Entally Lodge for the handover. 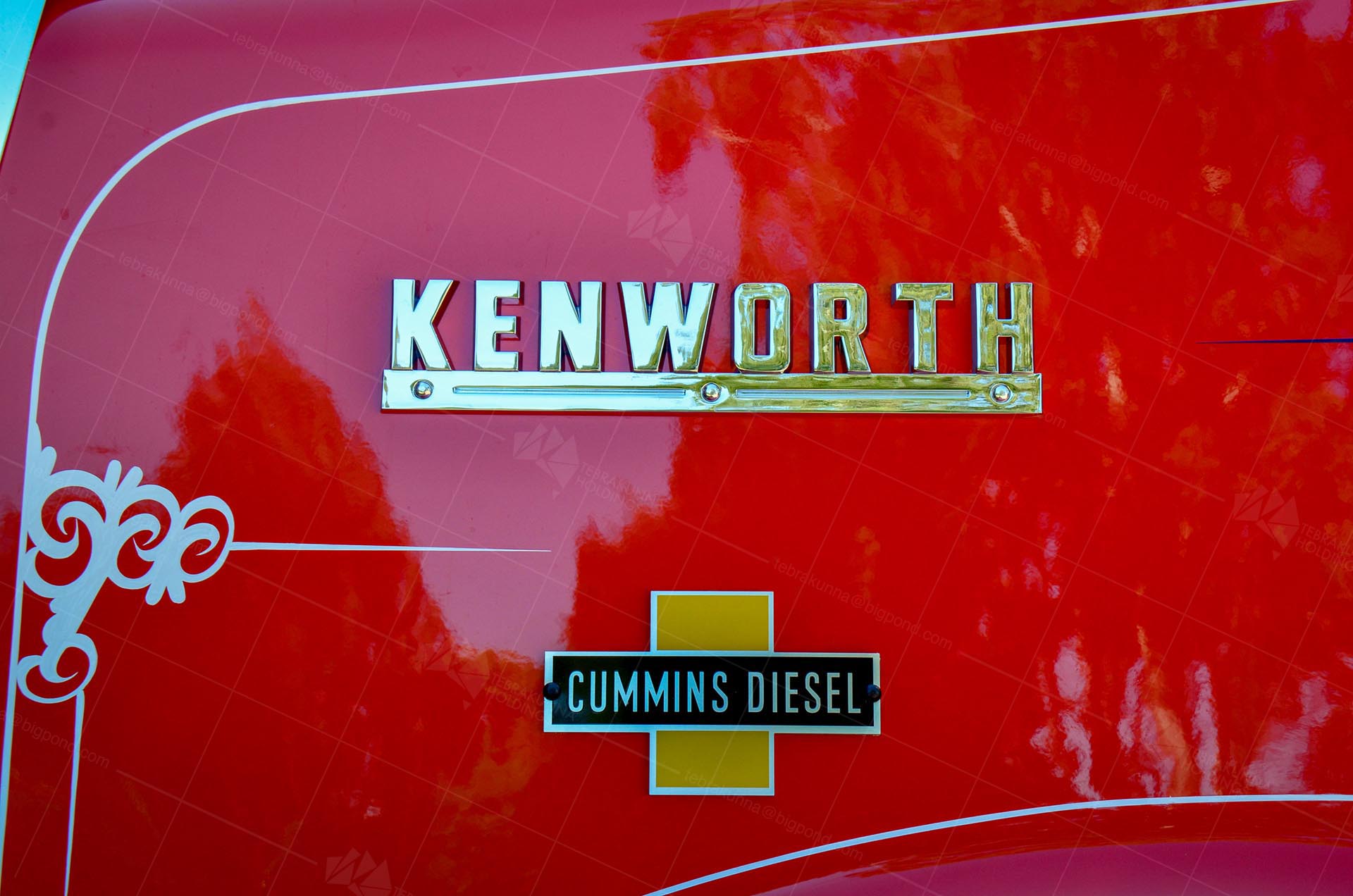 The Legend 950 dwarfed the collection of historic racecars in the main pavilion and it’s bright red livery, chrome and stainless glistened in the afternoon sun as Gradco’s management and staff arrived for their first look at this unique Kenworth.

Gradco CEO Oliver Diprose introduced himself with a firm handshake and a smile, enquired my thoughts of the new truck.

“It’s sure a head-turner,” I replied before adding, “The detail in it is amazing”.

Oliver admitted that the purchase of this Legend 950 was more of a heartfelt decision than a business one.

“We have a 1984 W-Model Gold Nugget,” Oliver began. “That wheelbase and spec of that old W-Model really suit our heavy haulage float operation and that’s what we tried to replicate with the Legend 950.”

“When Daniel first showed us the concept drawings of the Legend 950 I instantly noticed the detail that Kenworth were going to with this model. We just knew we had to have one. That fact that the suppliers came on board really helped make these truly unique models.”

“I love that Cummins painted the engine like an old 350 from the seventies,” he added. “However the way Kenworth incorporated modern features like the LED headlights for instance and blended everything into the old school look works perfectly.”

On the road with Mega Trucker – Jon Kelly (HHA)

The absences of a bulbar on the Gradco Legend 950 allows better vision of the additional grill bars, and gives a clear canvas for the old school Kenworth bug with the serif font. The round LED retro look indicators are another nice touch.

Being a heavy haulage truck Oliver specified the larger twin 406mm (Deep Bowl) heavy-duty cyclopac air cleaners with the smooth stainless risers and chrome party hats right out of the 70’s. Then there is the two-piece stainless sunvisor, which gives a nice old school touch compared today’s single-piece visor that has a more modern wrap around appearance. On top of the cab is five old school bullet lights.

Pay attention to the large 7-inch exhausts and the shrouds, which have been meticulously modelled on the original T950 even down to the chrome elbows. The tank steps are the old traditional ribbed style with polished tanks finished with stainless wrap and additional LED sidelights.

Interestingly, this is the only Legend 950 to be ordered with spider wheels, which makes a truly unique truck.

“We’ll be using it to shift some excavators in a few days time,” Oliver said, adding an invitation to join the shift. 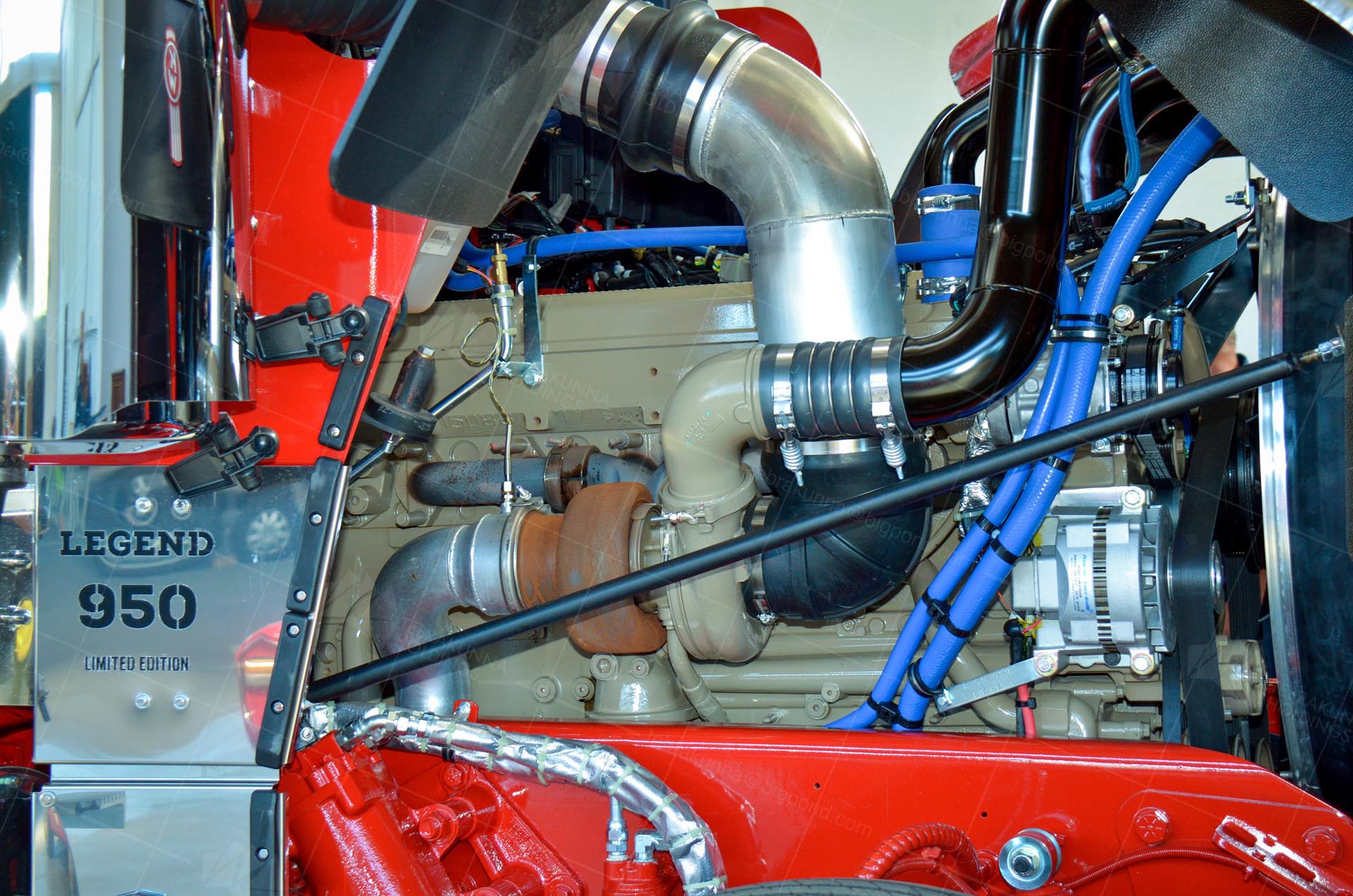 The Legend 950 coupled to a Drake low loader with a Volvo ECR235C excavator chained down to the deck sat gleaming in the mid-morning light, at Gradco’s Launceston depot.

This machine was needed at a demolition job Gradco were working on at the Devonport wharf roughly an hour further west along the Bass highway. The run through the undulating countryside would prove a good workout for the new Cummins under the hood.

“We’ve had a lot of people look at it over the past few days,” Oliver said as he eased out the clutch and the bright red 950 began to roll out of the yard.

It took roughly 15 minutes to commute through Launceston and onto the Bass highway. Today, traffic was light and Oliver was making good time. “We might stop up at Elizabeth Town for a coffee,” he gestured pointing to a large green sign with half a dozen town names and distances on it. 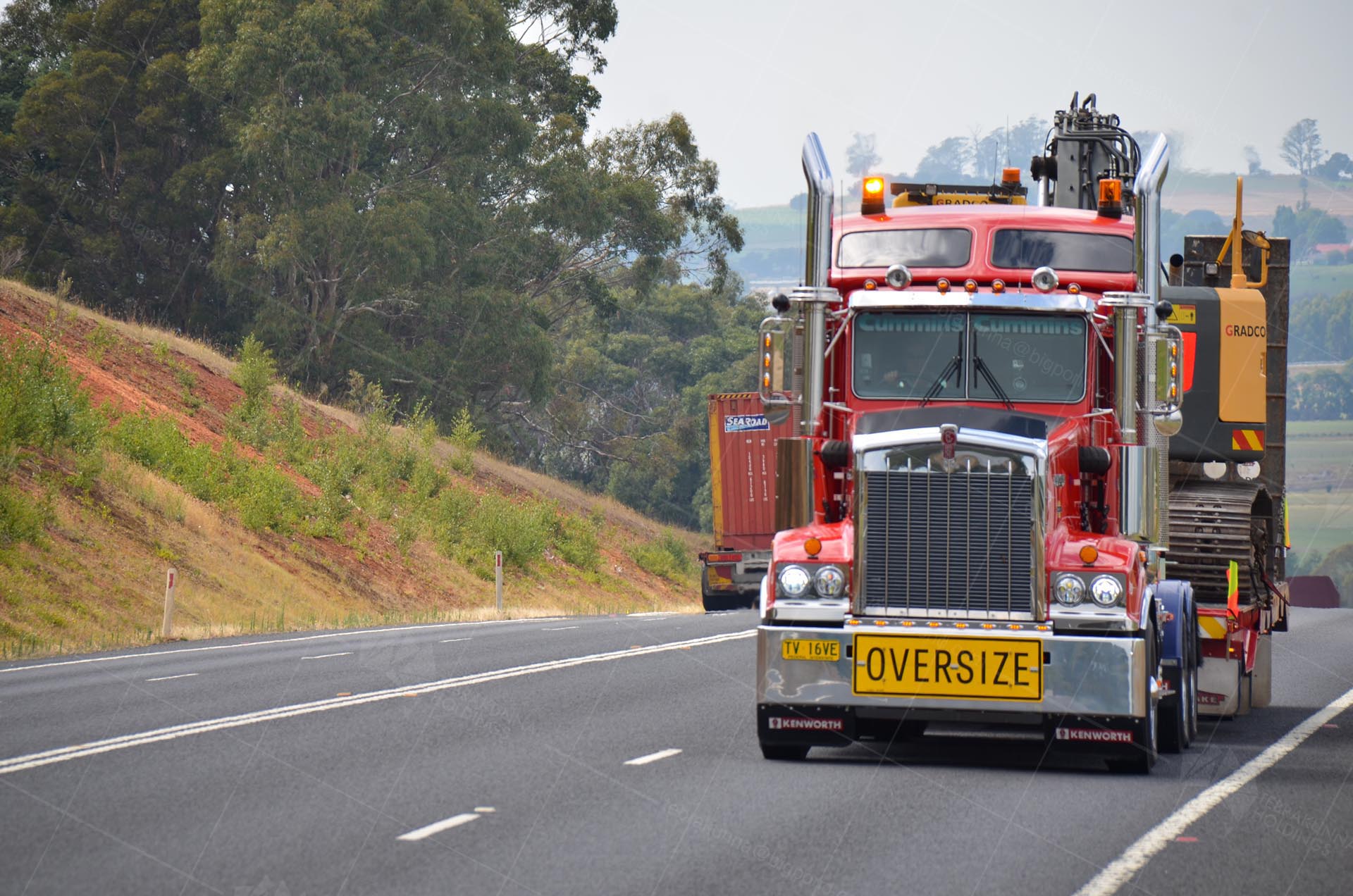 It was a splendid idea! The coffee was fresh, hot and full of flavour.

“We also have a bit of hobby collecting and restoring old Kenworth trucks,” Oliver enthused as he guided the 950 westward. “We have a couple of older W-models and an original Limited Edition Gold Nugget which we intend to refurbish back to showroom condition.

After unloading that machine at the wharf, Oliver collected the float’s dolly from a nearby yard he’d stored it the week before then slipped underneath the gooseneck of the float before reconnecting the unit. The next machine, a 40 excavator was being used on a bridge rebuilding project way out the back of Forth, not far from where the famous Tasmanian blues festival is held.

“We’re taking this machine down to the bottom of the island next week,” Oliver added, as he waited for it to crawl up the ramps. But more on that story another day.

There is little doubt that this unique Kenworth Limited Edition Legend 950 will one day end up in sitting alongside Gradco’s other classic Kenworth trucks.

Testament to the popularity of this Limited Edition release is the fact that orders for this model were rumoured to be well over double the amount available and that they were all sold within 40 odd hours of the announcement. This sadly disappointed more than a few operators but as my mother used to often say, “it’s the early bird that catches the worm”.

“We feel honoured and privileged to have had the opportunity to be able to purchase this Legend 950,” Oliver concluded. “It certainly will take pride of place in our truck fleet for some time to come, it truly is one of a kind.”

The Gradco story is one of humble beginnings that originated in 1995 when a resourceful 35-year-old Tasmanian, Dak Diprose, imported what was at the time considered a revolutionary all-hydraulic rubber-tyred Gradall excavator from the USA. He called the new business Gradall Constructions after the machine.

At the time the introduction of this machine, which was a considerably more expensive investment than anything else on the market at the time was considered a huge gamble. It was a gamble that paid off nonetheless. The machine boasted a rotating bucket – giving previously unmatched power and versatility, resulting in its widespread use throughout Australia during the 1960s.

Demand was on the increase as word of its capabilities spread and in 1968 Dak’s son, Robert, joined the business along with a second Gradall, this one fitted with tracks. It went to work digging drainage channels on British Tobacco’s giant Rushy Lagoon property in north-eastern Tasmania.

The earthmoving industry was evolving rapidly and during the 1970s the company diversified into other types of earthmoving equipment, with father and son working in partnership until Dak’s retirement in 1976. 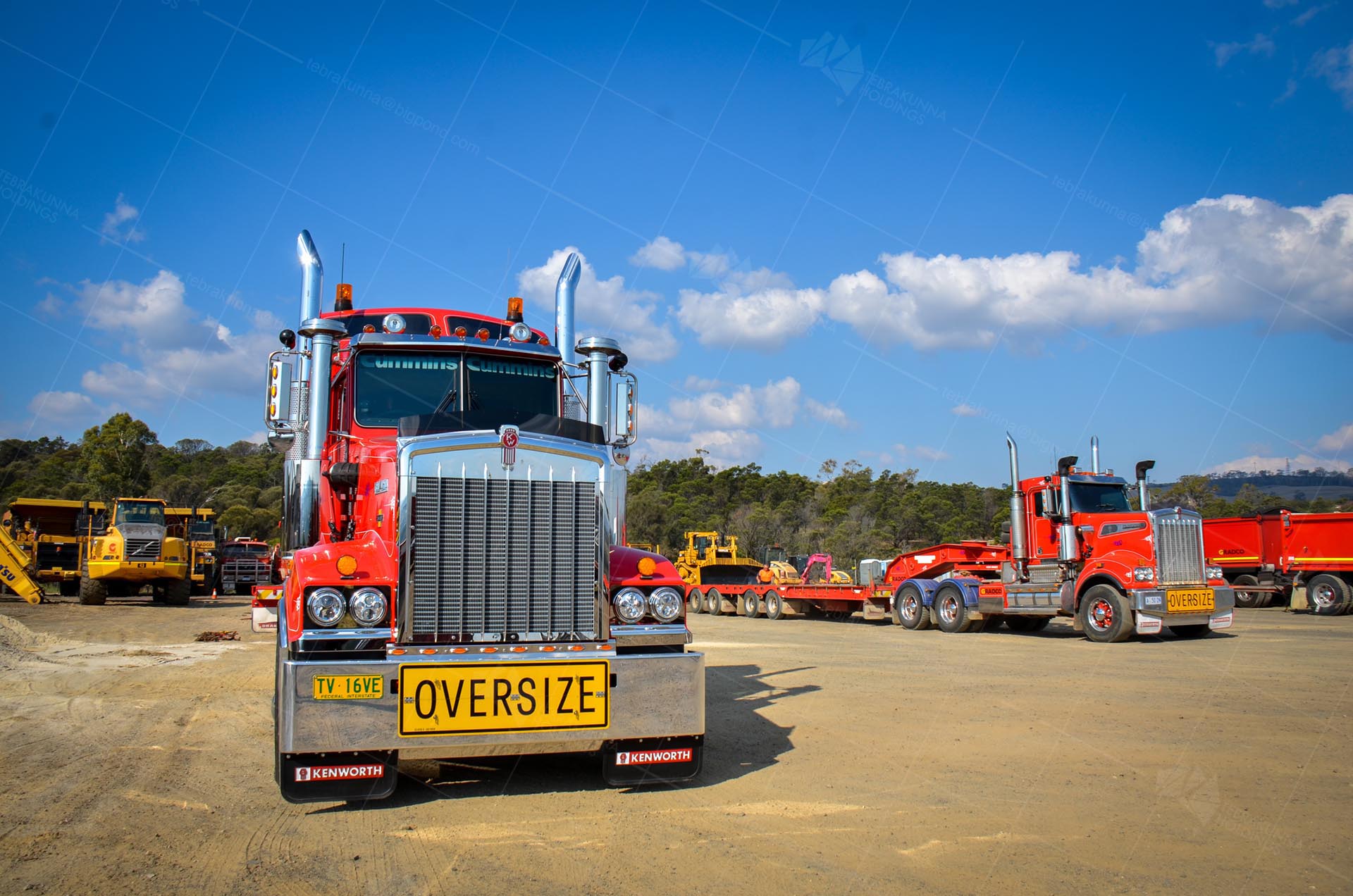 As the business grew the company changed its name to Gradco

With an ever-changing industry, the need to move with client’s needs and exceed their expectations brought on some of the most significant changes to Gradco since the 1980s.

Safety, Quality and the Environment were now a far higher priority in the industry, so the third generation of Diproses really embraced these concepts.

In 2002 Gradco implemented the Civil Contractors Federation’s Integrated Management System (IMS) – which provided a pathway to full accreditation to Australian and International Standards.

By 2010 Gradco, with the help of dedicated management and advisory team, achieved ISO accreditation for its Safety, Environmental and Quality Systems.

This gave Gradco the structure it needed to become one of Tasmania’s leading contracting companies, setting the highest standards across the industry, and today they are recognised as a market leader with works across Tasmania and into mainland Australia. 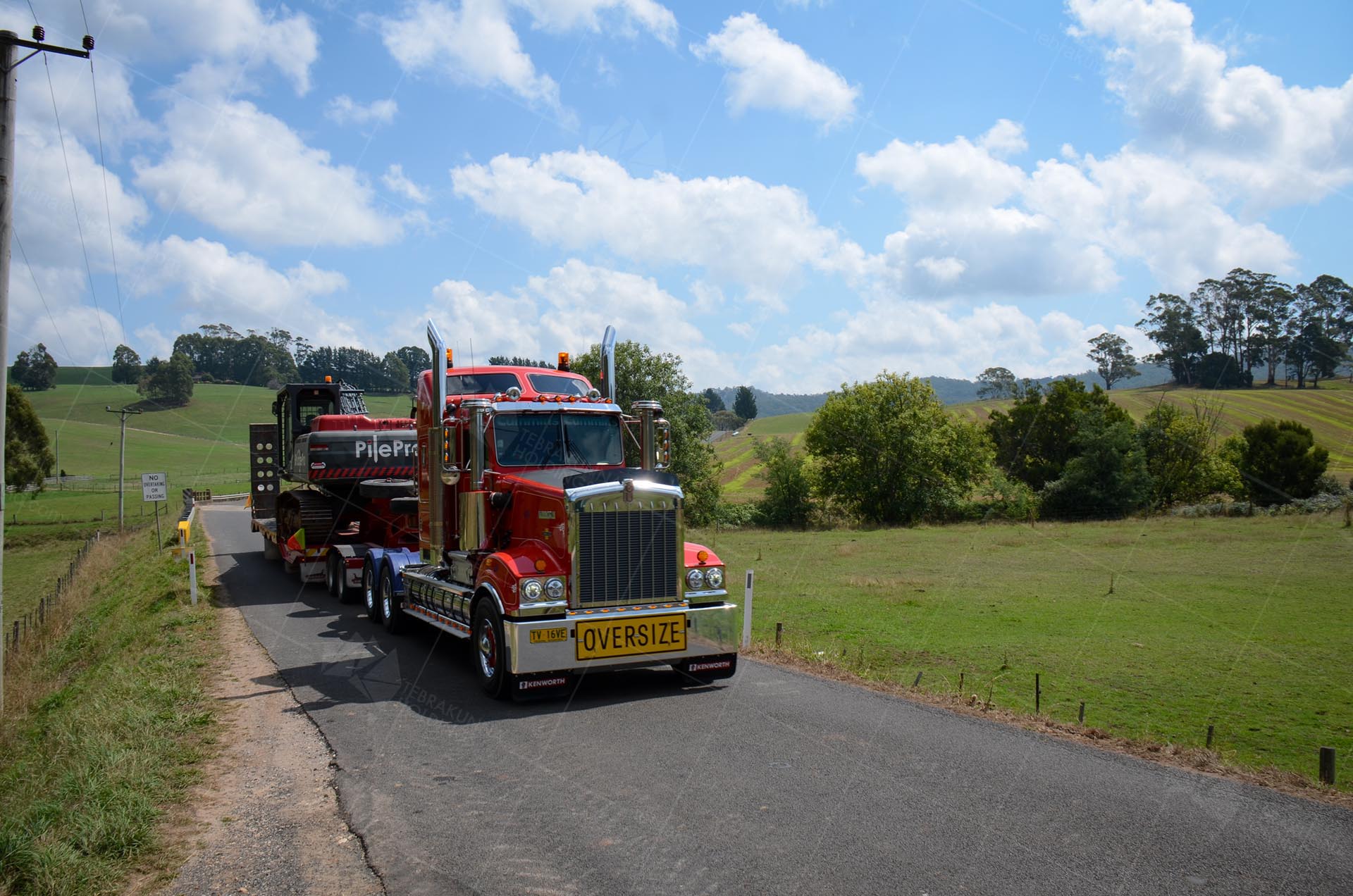