On the road with Mega Trucker – Jon Kelly

Behind the customised Kenworth bug and under the glitter of the acres of chrome, polished stainless steel and aluminium are some of the most heavy-duty highway haulers on the road as Howard Shanks discovered. 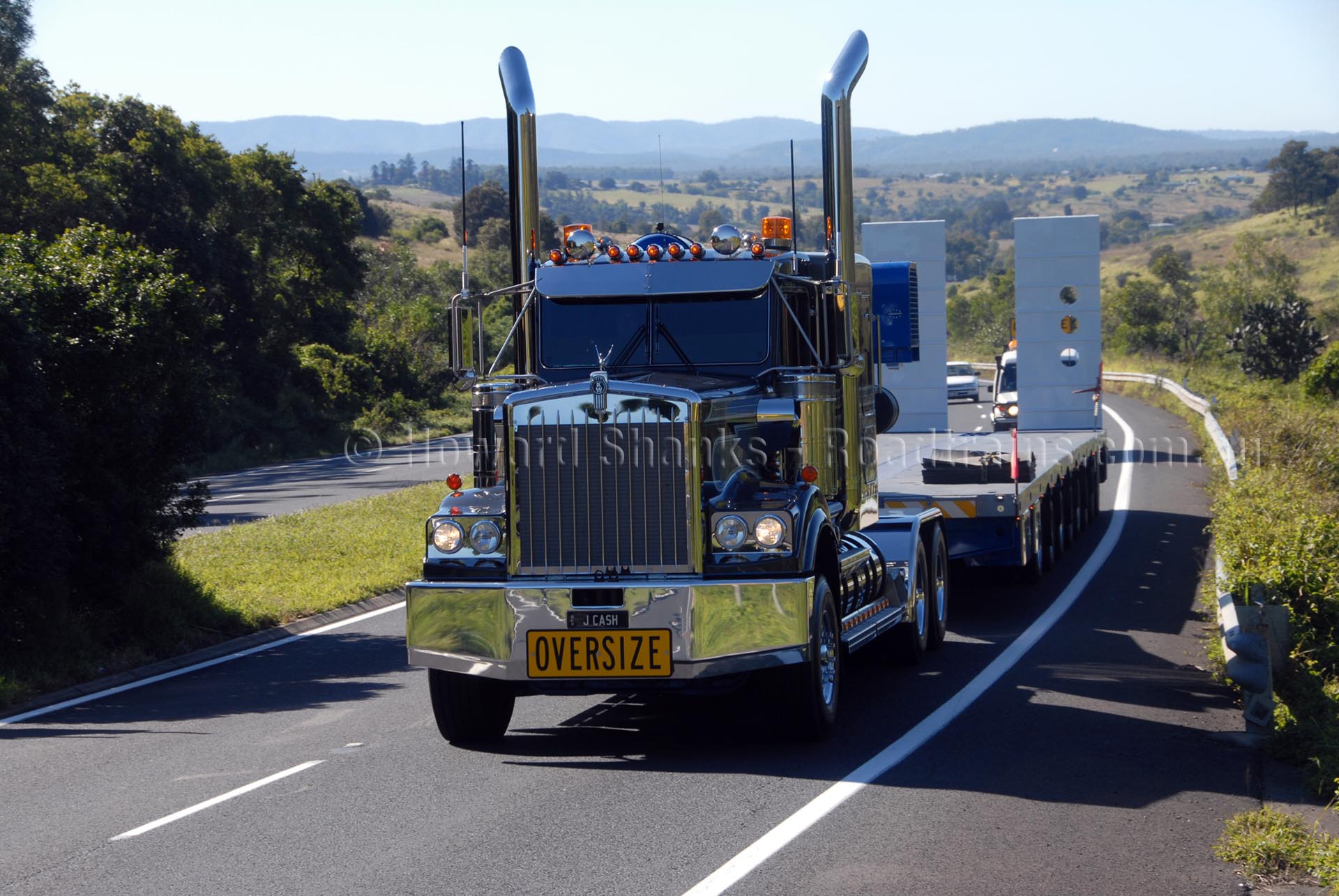 The sun wouldn’t appear for at least another hour or so. Yet at Heavy Haulage Australia’s Larapinta depot, on Brisbane’s south side, there was a flurry of activity. Huge lights brilliantly lit the yard as men’s shadows busily darted along the ground as they finished washing and polishing all the equipment. Even in the pre-dawn darkness these rigs were already glistening.

Heavy Haulage Australia is arguably one of the country’s premier heavy equipment movers, and their signature custom rigs are some of the most photographed on the road. The company has also won many awards and understandably taken out many truck show prizes for their unique rigs.

The company grew from humble beginnings too, commencing in 1999 with one prime mover, one 50-tonne capacity low loader and a vision to deliver the best service with best equipment.

“My grandfather, Frank (Smiler) Nilon, always had trucks and I grew up following him around, climbing in and out of cabs and sitting next to him on big trips, Managing Director of Heavy Haulage Australia, Jon Kelly began. “On school holidays and in my spare time I’d be down in the yard bumming around with trucks and trailers. My father Brian worked with the original White Motor Corporation in Queensland, so I’ve really got trucking in my blood,” Jon added.

Now with an ever-expanding fleet of 11 trucks and over 20 trailers in various combinations they have firmly cemented their position in the heavy haulage market in Australia. 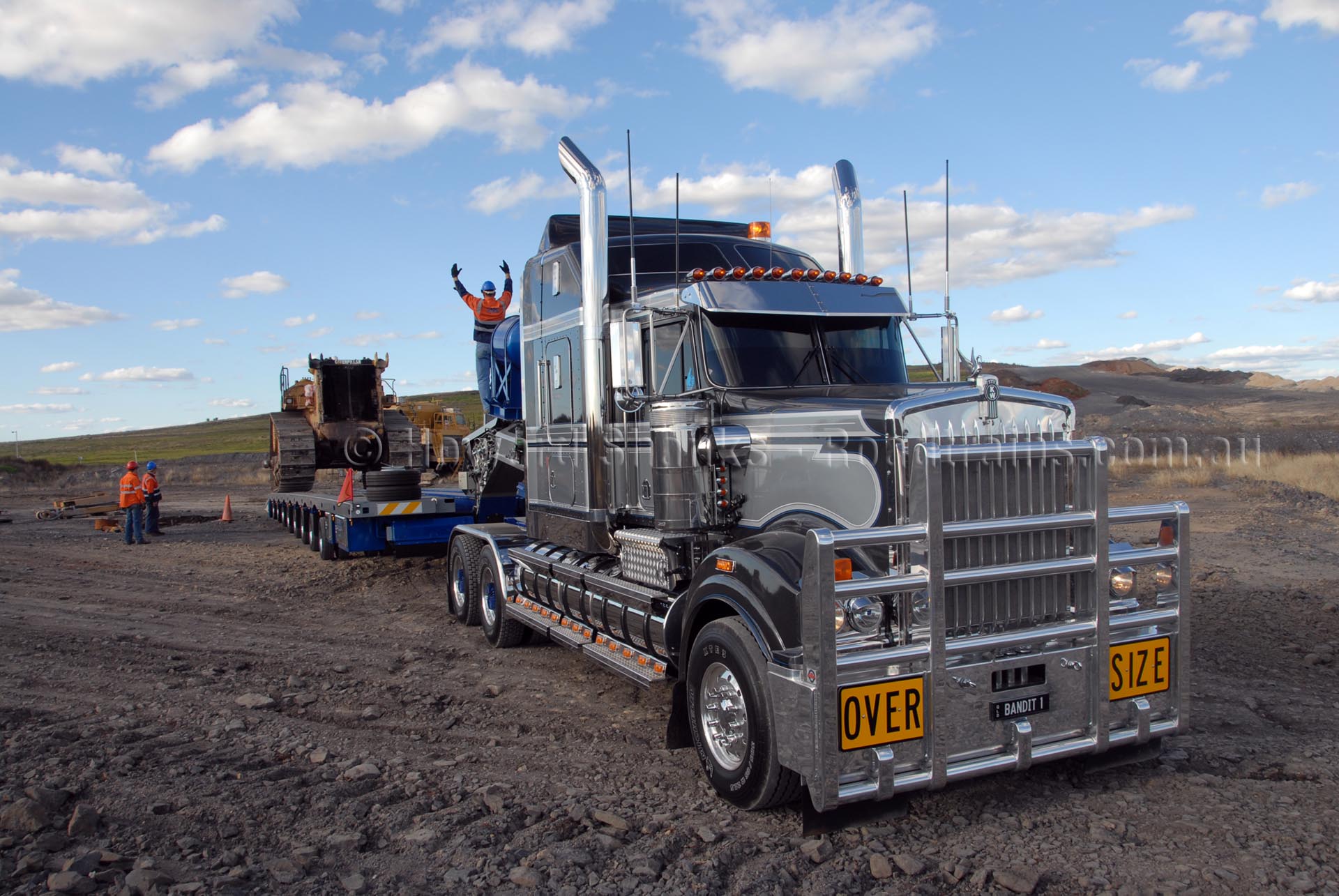 “Our steady growth has been built on sound business principles with a focus on customer satisfaction and pride in our equipment,” Jon explained. “As a result we now operate one of the most professional and well known fleets of immaculately presented trucks and trailer combinations.”

Right on 9am when the morning curfew on the main road out of town is over the three Kenworth trucks and their massive trailers rolled out of the yard bound for Toowoomba at the top of the great dividing range.

It is here where the three Kenworths would load the stripped down D11 bulldozers bound for the lucrative coal mining fields near Blackwater in Central West Queensland.

“These Caterpillar D11R’s are one of the biggest bulldozers on the market today,” Jon explained. “They’re powered by a Caterpillar 3508 which is essentially a V8 engine that pokes out roughly 850 horsepower (637Kw) and comes with a standard U-Blade with a capacity of 41 cubic metres and they can be fitted with a speacil ‘Coal U-Blade’, which is capable of carrying 74.9 cubic meters. They have an operating weight of 104,700kg, which is why they are stripped down and have to be transported on a steerable module trailer like ours,” Jon added. 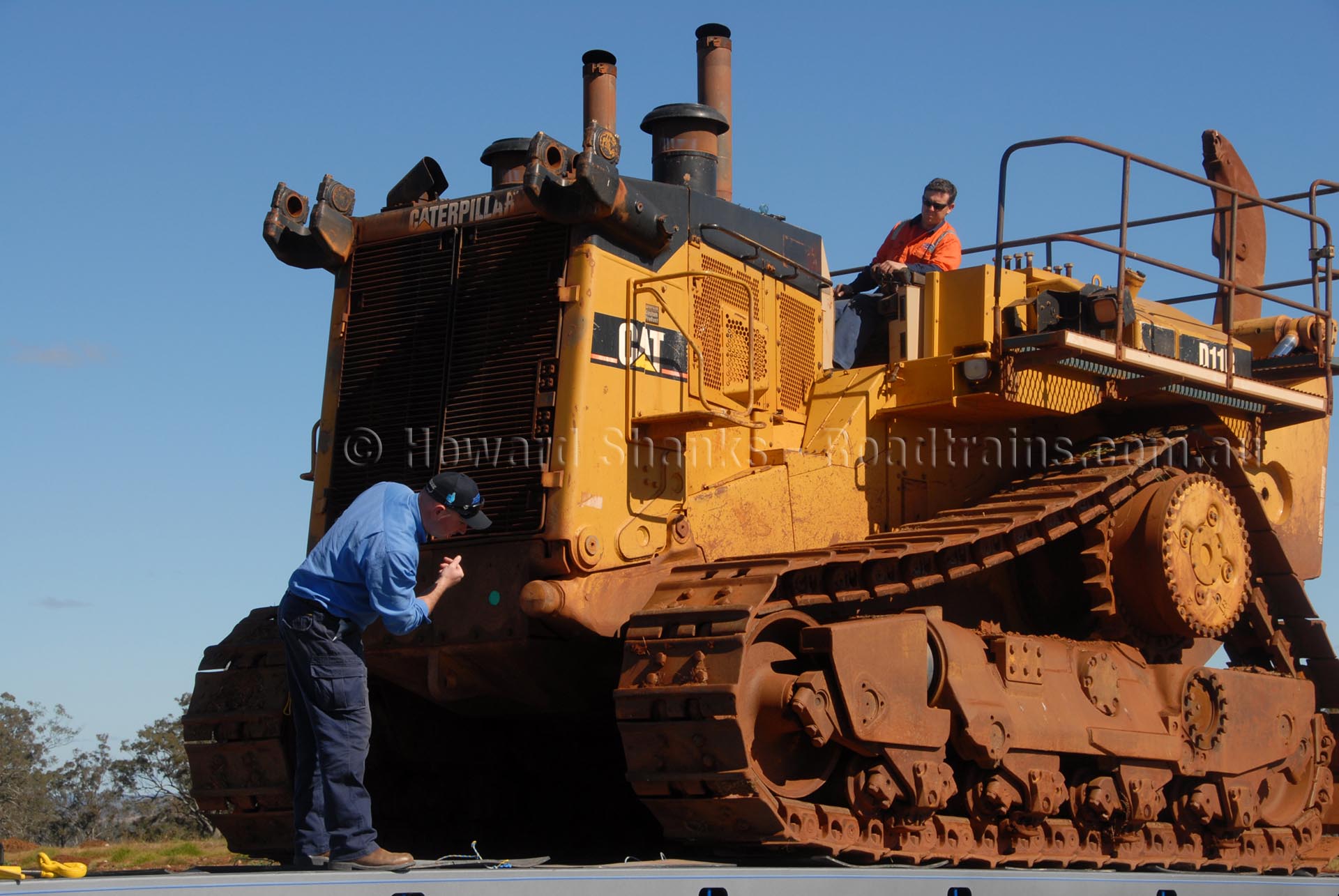 “These trailers are what’s known as an eight rows or eight and were built by Drake trailers in Brisbane,” Jon continued. “In fact mine is brand new and was delivered only last week. What the name means is there are eight rows of wheels with eight wheels in each axle group. It is very flexible in the fact that it can be widened from 3.2 meters to 4.9 meters, to suit various width loads. Also it can be raised and lowered which is an advantage when loading and unloading. Normally we have the deck set around the 800mm to 1000mm for travelling.  However it can be lowered to get under things like powerlines. Conversely it can be raised to get of speed humps and the like.

“The trailer’s steering is driven from a unique set of valving and hydraulics that are coupled to the trailer’s skid plate, which in turn determine the direction the truck is going and steer the trailer’s wheels accordingly,” Jon explained. “The two middle axles are fixed which is what enables it to travel down the road in a straight line. Even though it may sound a little complicated in practice it works very simply. For example the overall length is similar to a B-Double yet I can manoeuvrer it into most places you get truck and single trailer that’s how manoeuvrable it is.” 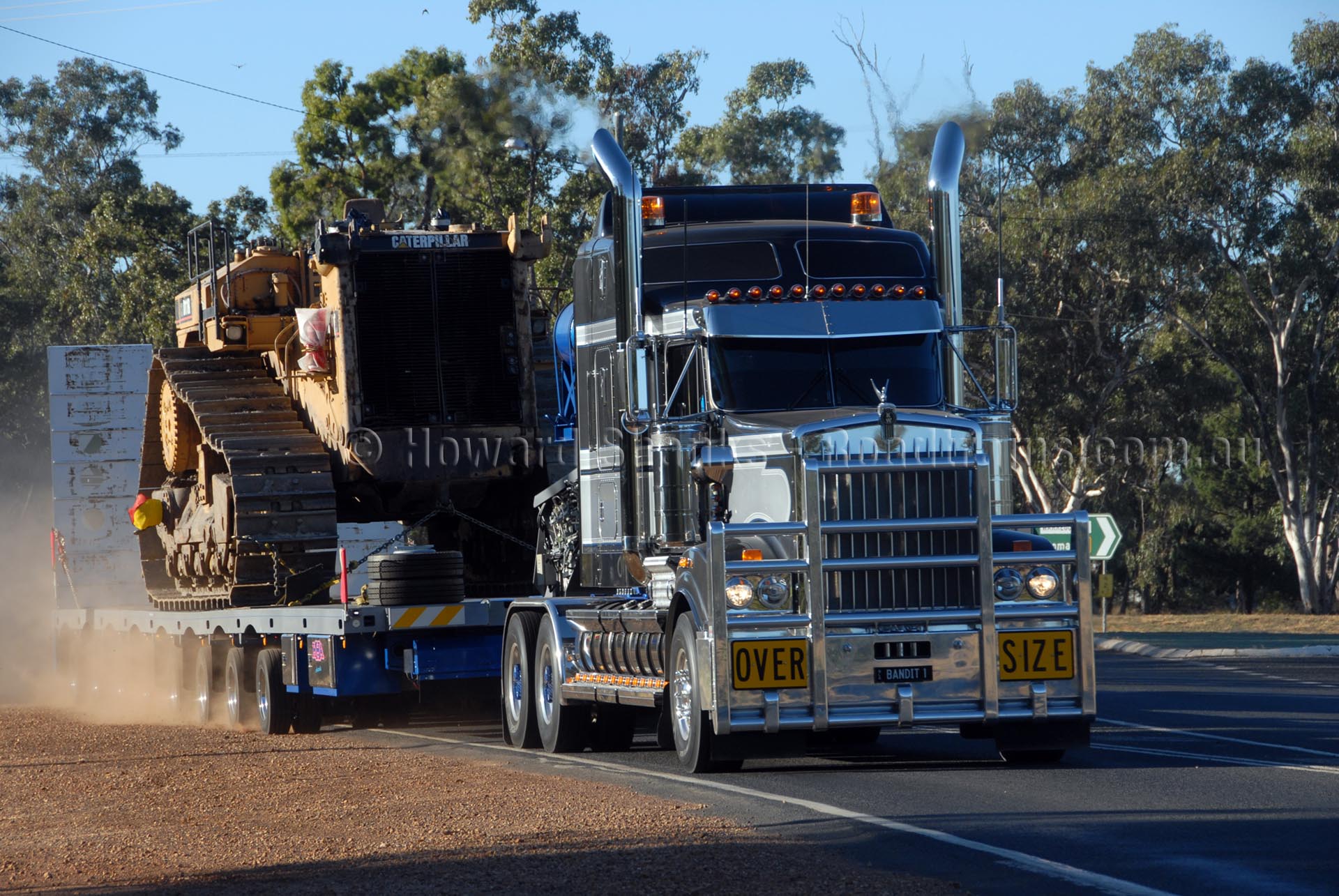 By midday the first D11 was crawling up onto Jon’s platform, meantime Jon’s driver Davo in the new T908 “Bandit-1” had reported that a warning light for the differential had come on. His concerns were well founded too as the oil filter on the front diff had spun loose and oil was gushing out. After a call to the local Kenworth dealer, Brown and Hurley, a new filter was delivered short time later and the T908 given the all clear.

Jon had specified “Bandit-1” with the heaviest duty Sisu diffs to get the maximum rating he could for a bogey drive truck – 240 tonne. “We’ve had some real reliability issues with these diffs,” Jon said. “Thankfully though Kenworth are working with us to sort them out. The other trucks have traditional rear axles and we don’t have any issues with them at all,” Jon added.

The two T908s are powered by Cummins’ ERG Signature engines and set to the maximum 620 horsepower. There are two transmissions in each truck, hence the two gearsticks. The blue T908 “Bandit-2” has an Eaton 18-speed main box with a two speed Joey box. Which is essentially an additional transmission used to give even lower reductions. While the gun metal grey T908 has an Eaton 18-speed main box and a four speed Joey box, which gives two under drive ratios, direct and an overdrive. The rear suspension is Kenworth’s own low profile six rod.

Meantime, Jon’s personal truck is the lavish C501which incidentally was the last C501 off the Kenworth production line. Affectionately dubbed “Walkin the line” with the custom “J Cash” number plate it is tribute to one country music’s greatest singers.

This truck is powered by Cummins’ Gen-2 Signature and features the 18-speed main box with four-speed Joey transmission. Again, it has the low profile big six rear end too. 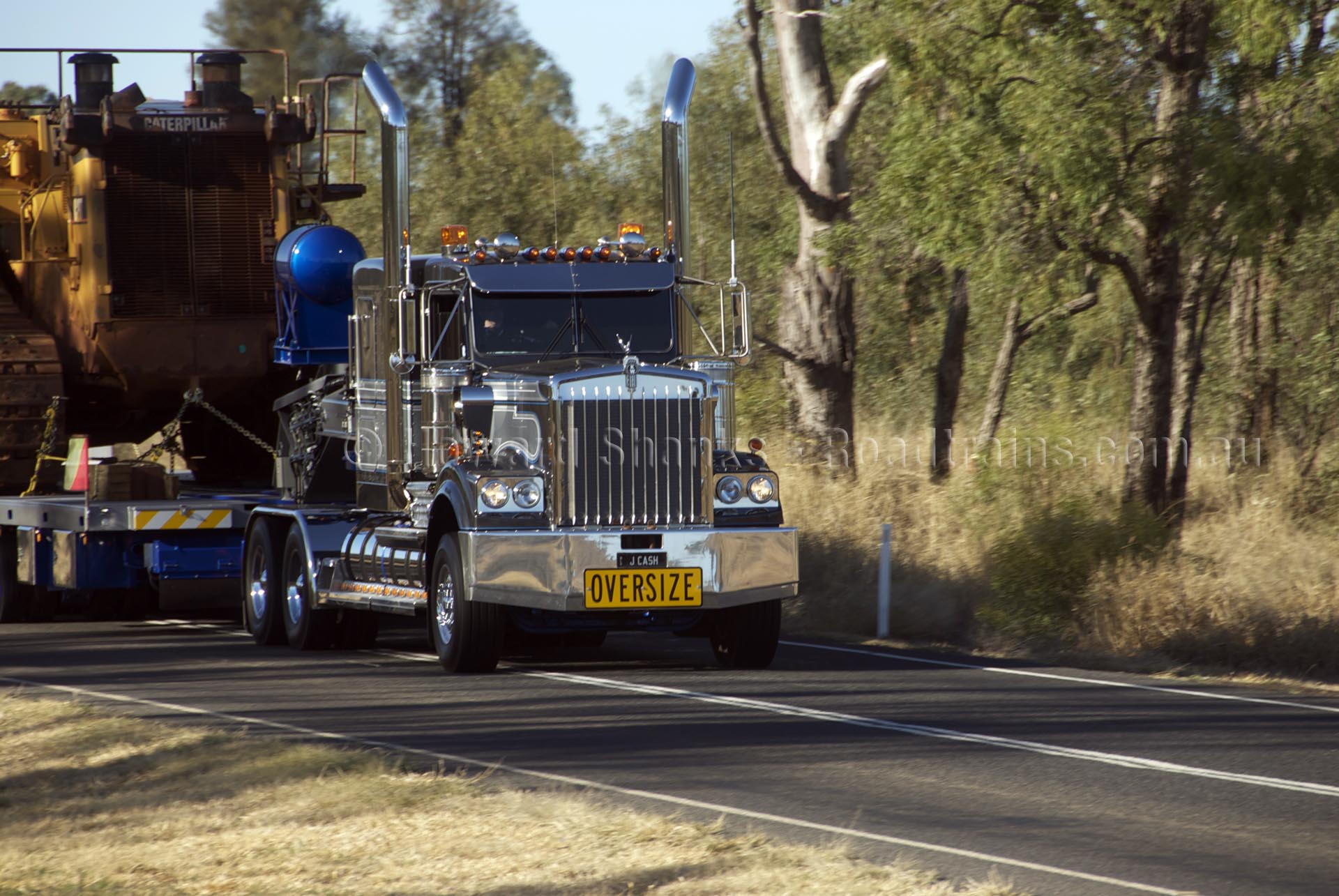 “The reason I specified a C501 was because the chassis has straight rails from the front to the back and in our line of work where we do a lot of push pull work where we connect two trucks together it is real advantage,” Jon explained. “Kenworth are one of the few truck makers who have model like this. Have a look under most trucks and you see the front bumpers are mounted to castings which drop down to accommodate the radiator and that works fine in most applications but in heavy haulage the straight rails provide the best solution when we’re on a push-pull job.”

“It is the attention to detail, clearly seen in our fleet, and our planning that wins Heavy Haulage Australia a lot of its work,” Jon explained. “By being involved in all layers of the business I see and hear our client’s requirements first hand and knows how to respond with equipment and have the ‘know-how’ that makes for a complete heavy haulage service, essentially we provide a one stop transport solution.” 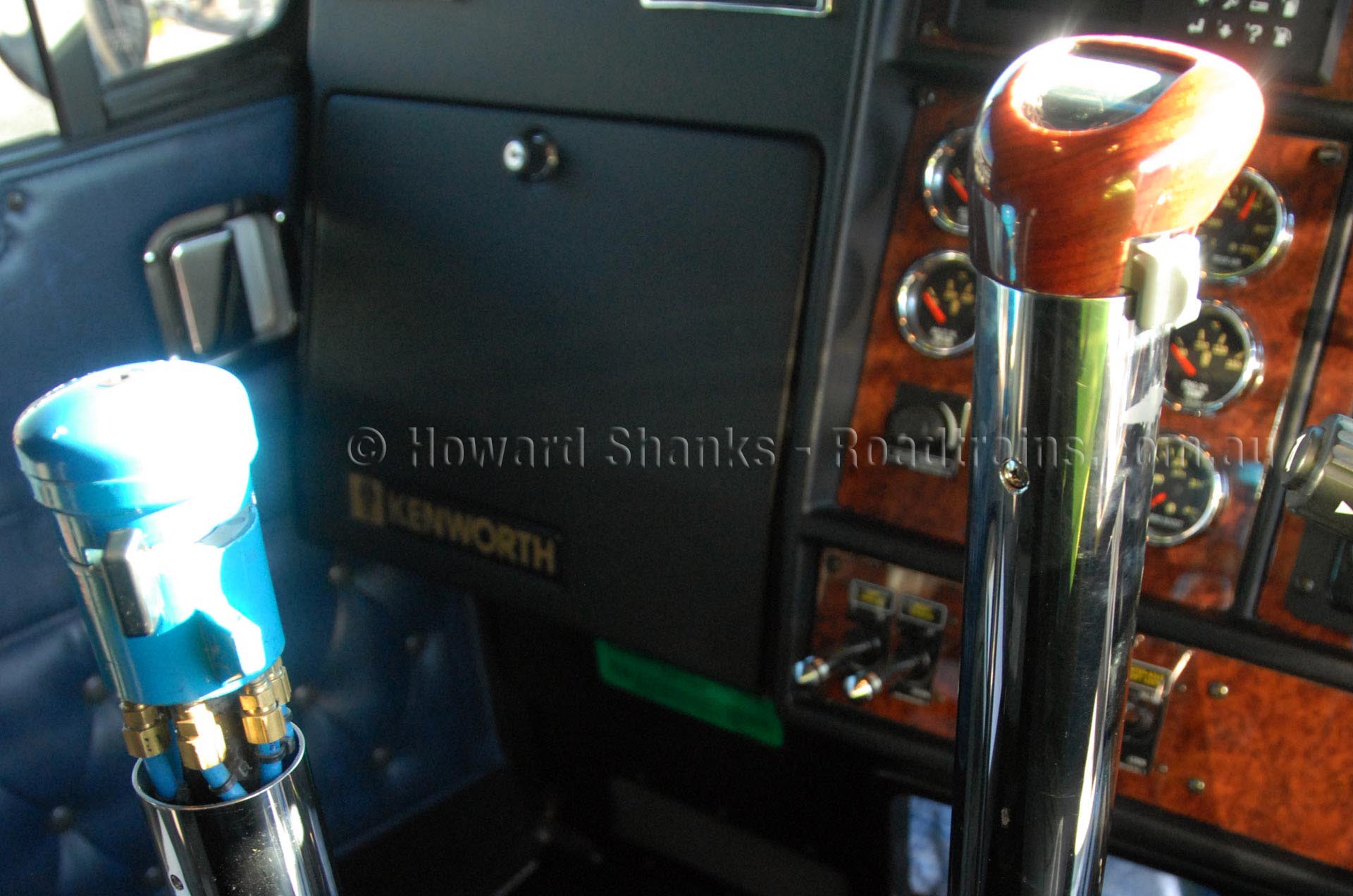 “This is a very volatile industry,” Jon continued. “Traditionally heavy haulage companies have had to rely on other subcontractors to carry out their accessory transport for the larger items, such as the cabins and blades that go with these D11s – but over the years we have found that we can offer a better and more reliable service to our customers by providing general transport ourselves. As a result the customer at the end of the day can rest assured that they will receive the same level of service and appreciation through the whole project that they have previously become accustomed to from us.”

“We can only be as good as our equipment, and that’s why we by Kenworth truck and specify Cummins engines,” Job added. It is because they give us the best services.”

As the sun set a few days later in Blackwater, the last of the D11s gently backed off the trailer and Jon’s crew set about rolling up the chains, we asked Jon if he had any tips he could give us on customising trucks.

“Yeah I’d be happy too,” he replied. “But we’ll leave that for another story.” 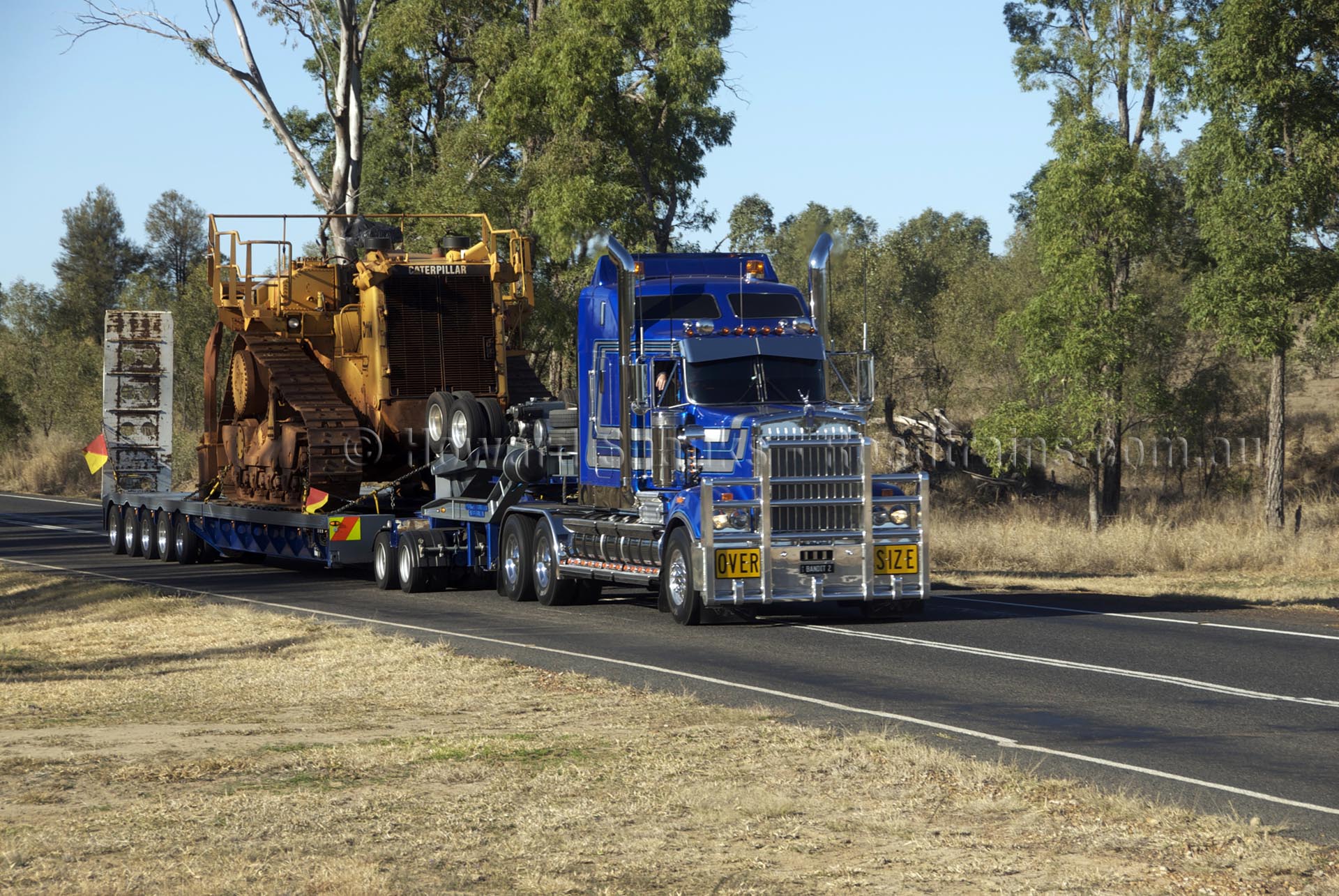