Words and photos by Howard Shanks 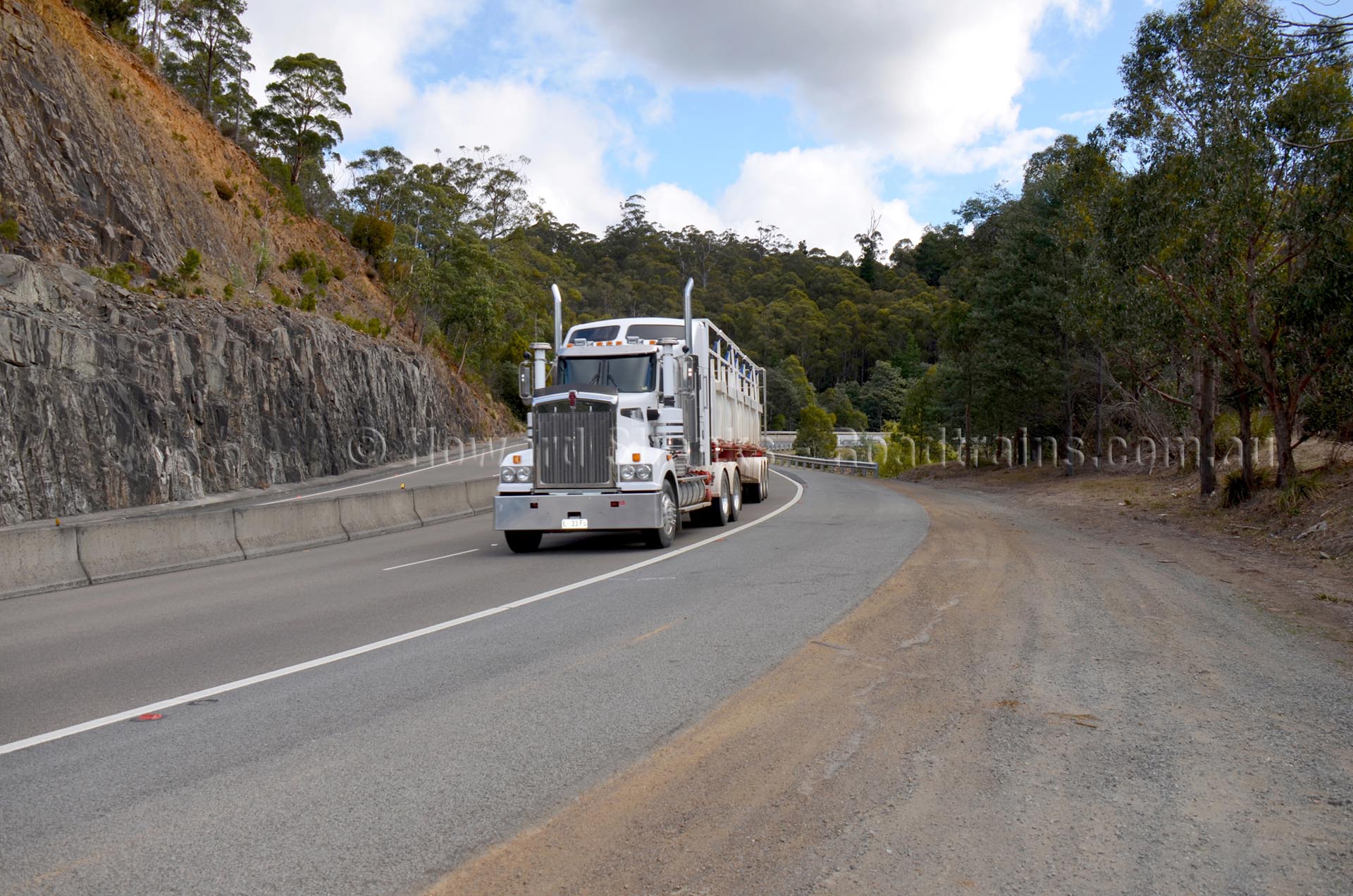 Our love of and demand for salmon has risen exponentially in past decades but Atlantic salmon does not occur naturally in the wild in Australia. This means most salmon produced in Australia is cultivated in farms and the cool southern ocean waterways of Tasmania are the perfect habitat for these Atlantic salmon farms.

As our global population exceeds seven billion, arable land (ground suitable for producing crops) is under increasing pressure to produce enough protein for our needs. In the latter part of the last century, we became more aware of the health benefits of marine proteins, in particular Omega-3 fatty acid. Since then the salmon-farming industry has boomed. According to the United Nations Food and Agriculture Organisation more than half of the world’s seafood will be farm produced by 2025. 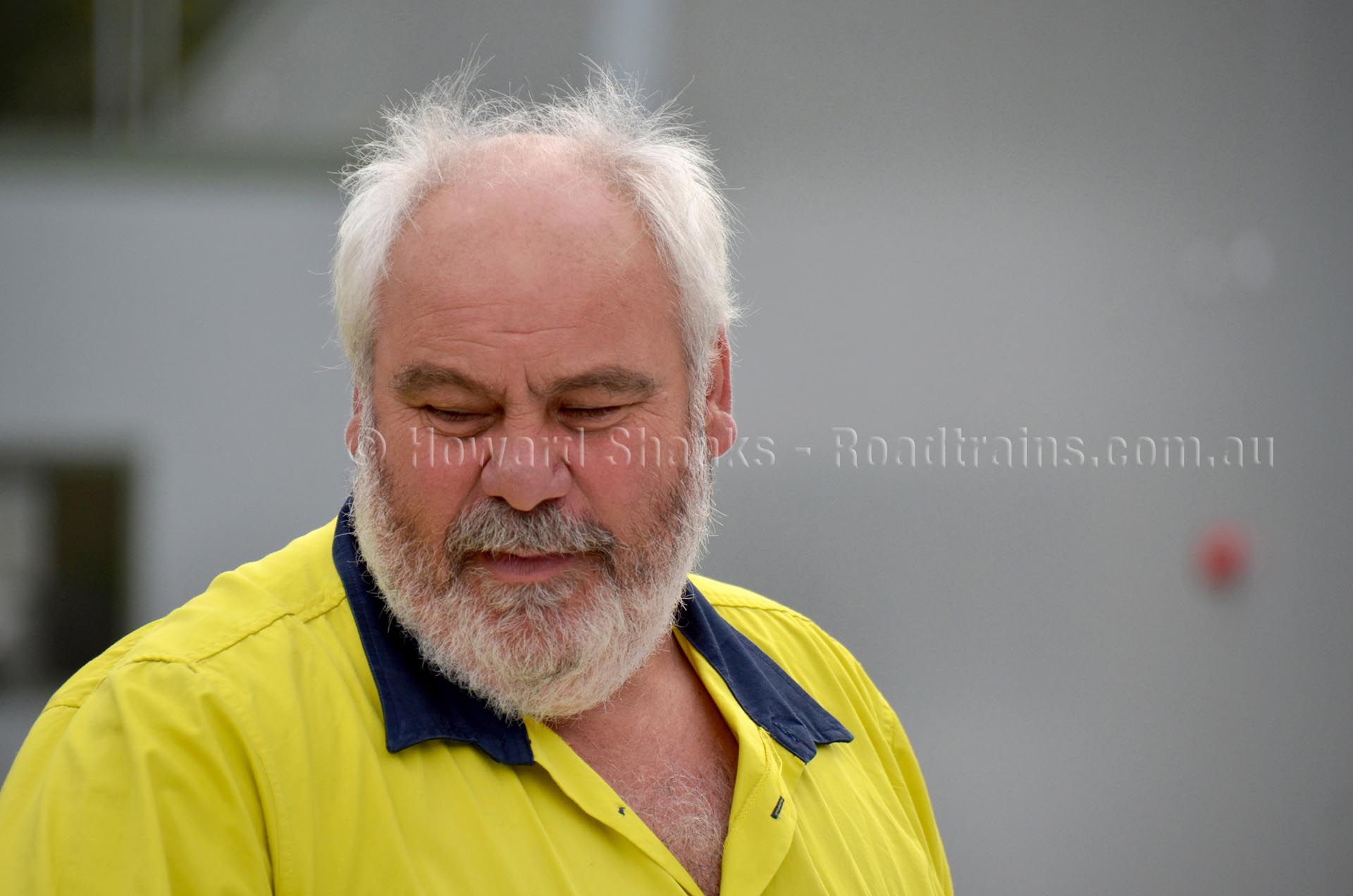 This rising demand has not gone unnoticed by Dillon Transport owner Nick Petrascu either. His sharp eye and quick wit leaving no doubt of the energetic demeanor smoldering close under the skin, he’s a man who spends life looking more through the windscreen than the mirrors. Matters like the impact of government regulation, industry unity and commercial opportunity run far more fluid in the Nick’s mindset than trips down memory lane. 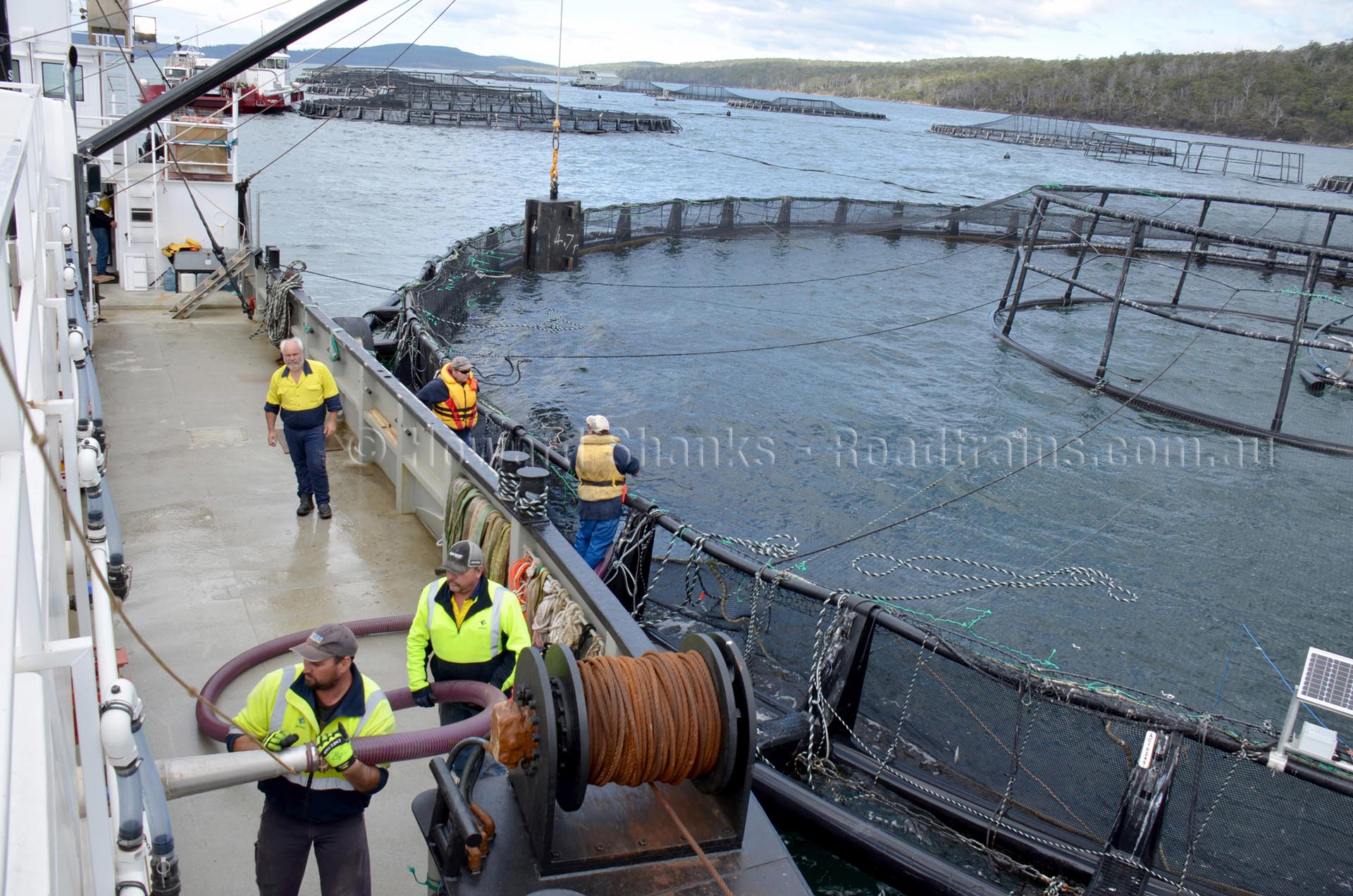 “It shouldn’t be too rough out at sea today” Nick smiled as his glanced skyward before climbing into the cabin.

The Derwent River glistened in the early morning sun, as the T909 Kenworth wound its way up the southern outlet out of Hobart. It was a brilliant autumn day in Tasmania, even the chilling winds had subsided. Way over to the southwest, dark clouds swirled low around Mt Wellington, threating rain, teasing nonetheless that the long drought might finally be over.

The smooth run on the bitumen would take us as far a Huonville, roughly 40 kilometres away, from here we’d head right where the narrow bitumen quickly gives way to a well used gravel road that winds its way up into the mountains and the Tassal’s Rockwood Road Hatchery.

Here at the state-of-the-art Rookwood Road Hatchery, over five million of these smolt (young Altantic Salmon) are kept for 8 to 12 months before being transferred to the sea pens. By the end of 2016 with the completion of a second recirculating aquaculture building production of the Rookwood Road Hatchery will double to 10-11 million smolt per year.

The smolts are easily stressed and far more vulnerable to climate conditions than any other animal, Nick confirms that the Aquaculture Industry demand particularly high standards of care during transport to ensure animal welfare. In fact so valuable is live fish cargo that each load is insured for a quarter of a million dollars. Consequently, trailers purposefully built for fish transport coupled with strict adherence to cleanliness and maintenance standards are paramount in keeping the customers satisfied.

“When we have the live-fish on board we need to be extremely reliable,” Nick added. “On the journey from the fish hatchery to the sea pens its important not to stress the fish. We have the latest monitoring and oxygenation systems on the trailers to ensure the fish are kept in the optimum range. When we’re traveling there are snorkels that feed air into the water to strip out the CO2 build up that occurs naturally. Then, when we get on the barge they pump sea water through the tanks to keep up the oxygen.” 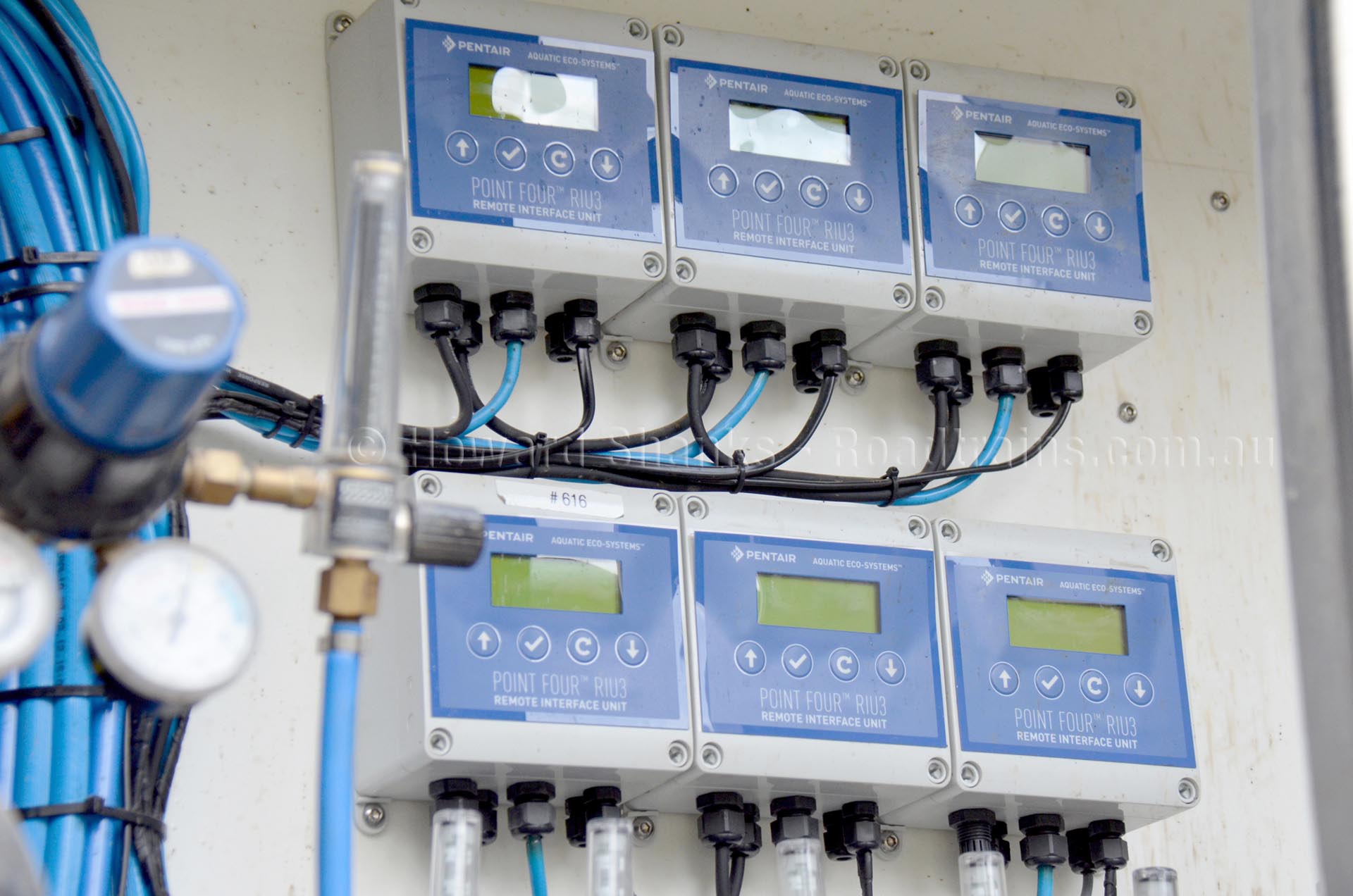 Tassal has six marine regions, in Tasmania, where the standard pen has a volume of 11,600 cubic meters and holds enough salmon to produce 120 tonnes once harvested. Salmon are kept in these large sea cages between 12-18 months and continue to grow until they are ready to be harvested at an average weight of 5.0kg live weight.

Nick approaches new truck specifying with the sharpened pencil of an accountant. Combining a broad knowledge of the transport industry and his understanding of his customer needs with consideration for future regulations, he configures his trucks and trailers to safeguard the highest interests of his company.

“The terrain here in Tasmania is very demanding on a truck especially down here at the southern tip where there are numerous long steep climbs and descents,” Nick explained. “We need a truck that has plenty of power for those long pulls, a decent engine brake and something that will deliver good reliability with maximum economy.

“All our Kenworth trucks do exactly that,” Nick added This latest T909 is powered by a Cummins E5 set a 550 Horsepower and 1850 lbft for torque. The transmission is Eaton’s RTLO22918B with Meritor RT46-160 GP that have cross lock in both axles.

“The engine brake is terrific and we need all the engine braking we can get down here around Dover,” Nick said.

“But reliability is one area we really focus on with the live fish,” he continued. “If we have a breakdown, with a long delay that can stress the fish and we really have to work hard to ensure the conditions in the tanks are maintained at the optimum levels.” 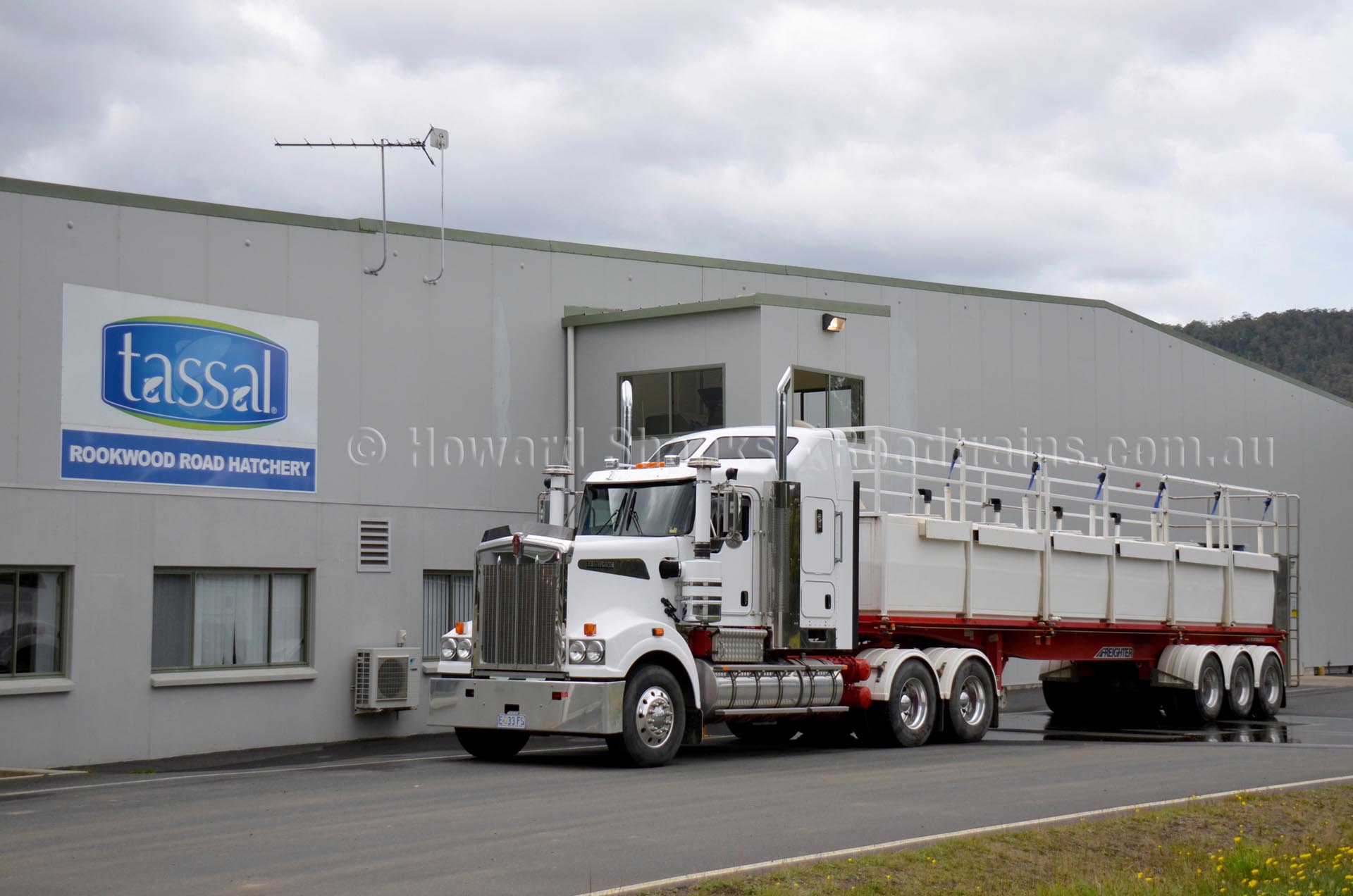 “I only buy Kenworth trucks and over the years I’ve found them to be a great investment and tool for our business. I look at them as a ten to fifteen year truck. Our local dealer, CJD Equipment do all our servicing and they do a terrific job.”

With a Kenworth truck if you invest your money into them at the start and look after them with scheduled maintenance you really get a good return when it comes time to sell them at the end.”

“Take that T950 I purchased in 2004, its’ been a great truck for us, in fact it’s one of our favorites. It did live fish for the first 4 year’s of its life. There is no question the salt water is hard on any vehicle but all we did to the T950 when it finished on live fish was sand blast and paint the chassis. All the cabin needed was a cut and polish, which goes to show you the quality of the paint on a Kenworth,” Nick revealed. “It still works ever day too, hauling fertilizer for our Incitec Pivot operation.”

“I get at lease one call a week, sometimes two asking if I’d like to sell it,” Nick added. “And, they’re offering me the same money I paid for it 12 years ago, that on its own says a lot about the worth of a Kenworth.”

“The trailers I get specially made by Freighter to suit our requirements. The twist locks are not in the standard position for containers, they really only suit our fish tanks. They are like Kenworth to deal with, very easy and willing to spend time to make the equipment suit our special requirements.” 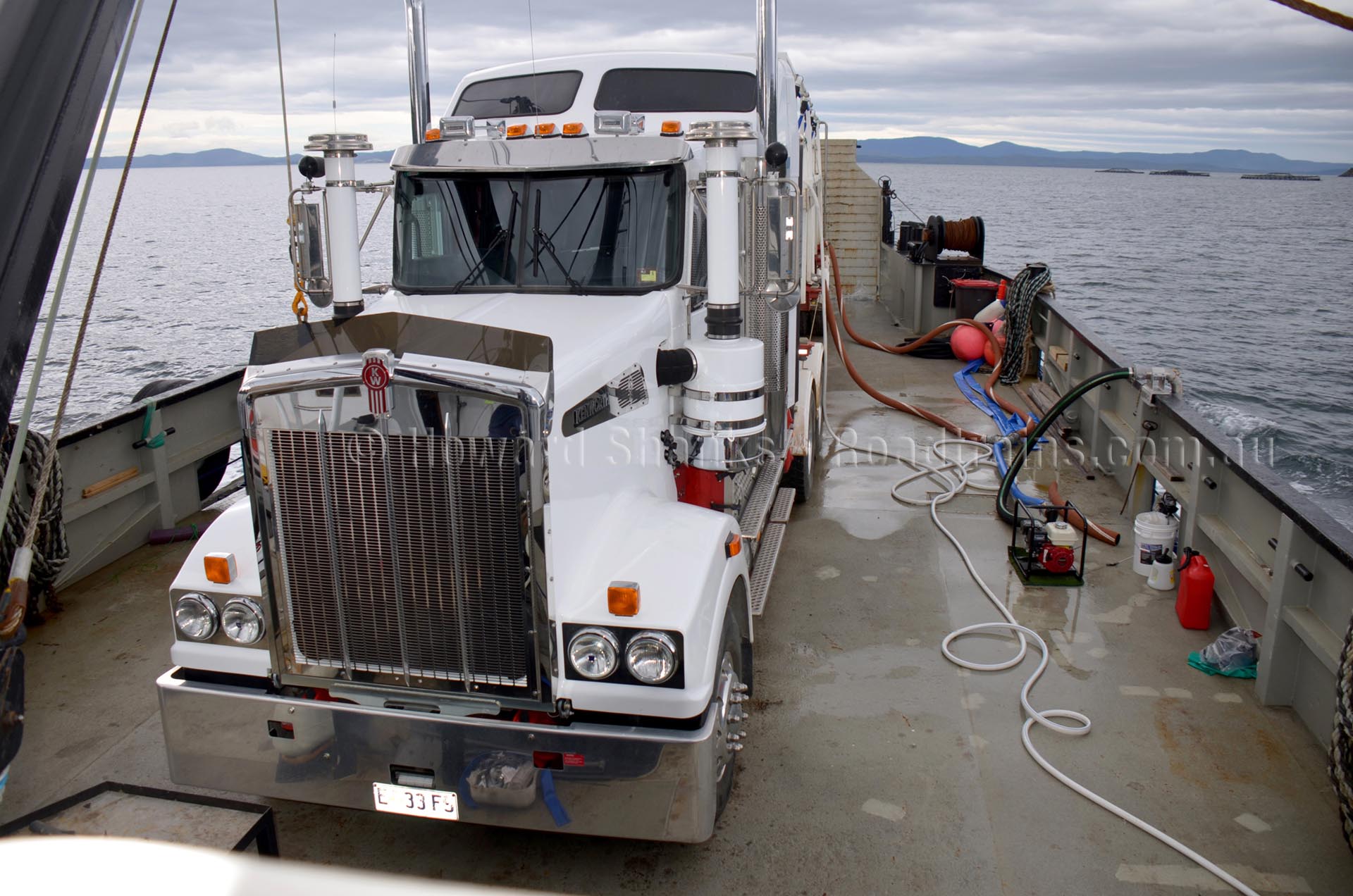 “Those trailers really cop a lot of punishment too. After dealing with all the tight twists and turns they get covered in seawater out on the barge,” Nick added.

The fiberglass tanks are made locally in Tasmania and the sophisticated oxygenation monitoring system is from the North American water specialist, Pentair.

Sanitation of the equipment is one critical area and one that is closely monitored. “Before we put a load of fish in the tanks, the entire truck has to be cleaned and sterilized”, Nick revealed. “It’s a process that takes about two and half hours each trip.”

“It’s all about understanding your customer’s needs and tailoring a transport solution that adds to their efficiencies,” Nick said. “Tassal are a “world’s best” company, in fact they are the only Australian company listed in the 2015 seafoodintelligence.com report, achieving a Corporate, Social and Environmental Responsibility rating of excellent – only one of four companies in the top 100 to achieve this level,” he added.

“Our investment in the best equipment, from the Kenworth trucks, Freighter trailers, our purpose built tanks and state of the art monitoring means that we’re working on the same page as our customers,” Nick concluded. “It’s that inherent quality that our suppliers, like Kenworth and Freighter build into their products along with the back up support we get from our dealer CJD that enable us to do our job to the high standards expect by our clients.

“We also stock also the inland lakes with fish for the recreational fishermen,” Nick added “Now that would be an interesting story for you one day, seeing those big four and five pound Rainbow Trout’s on a hook, line and sinker.” 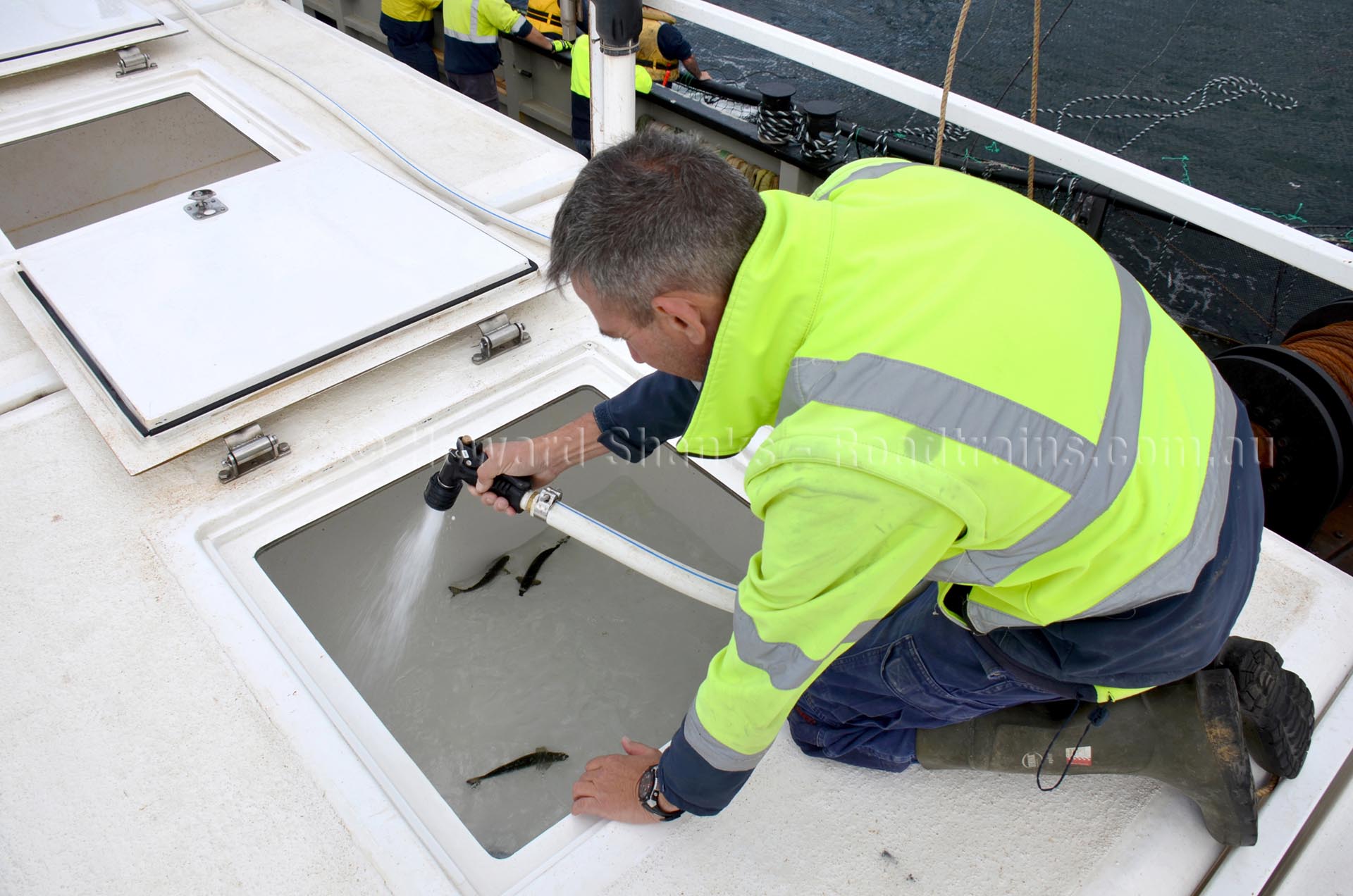