Words and Photography by Howard Shanks.

The roads in far northwest Queensland are arguably some of the toughest in the world and that’s because they’re damn rough with deep river crossings often inhabited by dangerous crocodiles that lurk near the banks, yet for Hintz Livestock Transport and their 6900 Western Star it’s a challenge they face day in day out as Howard Shanks discovered on the run to Riverview Station. 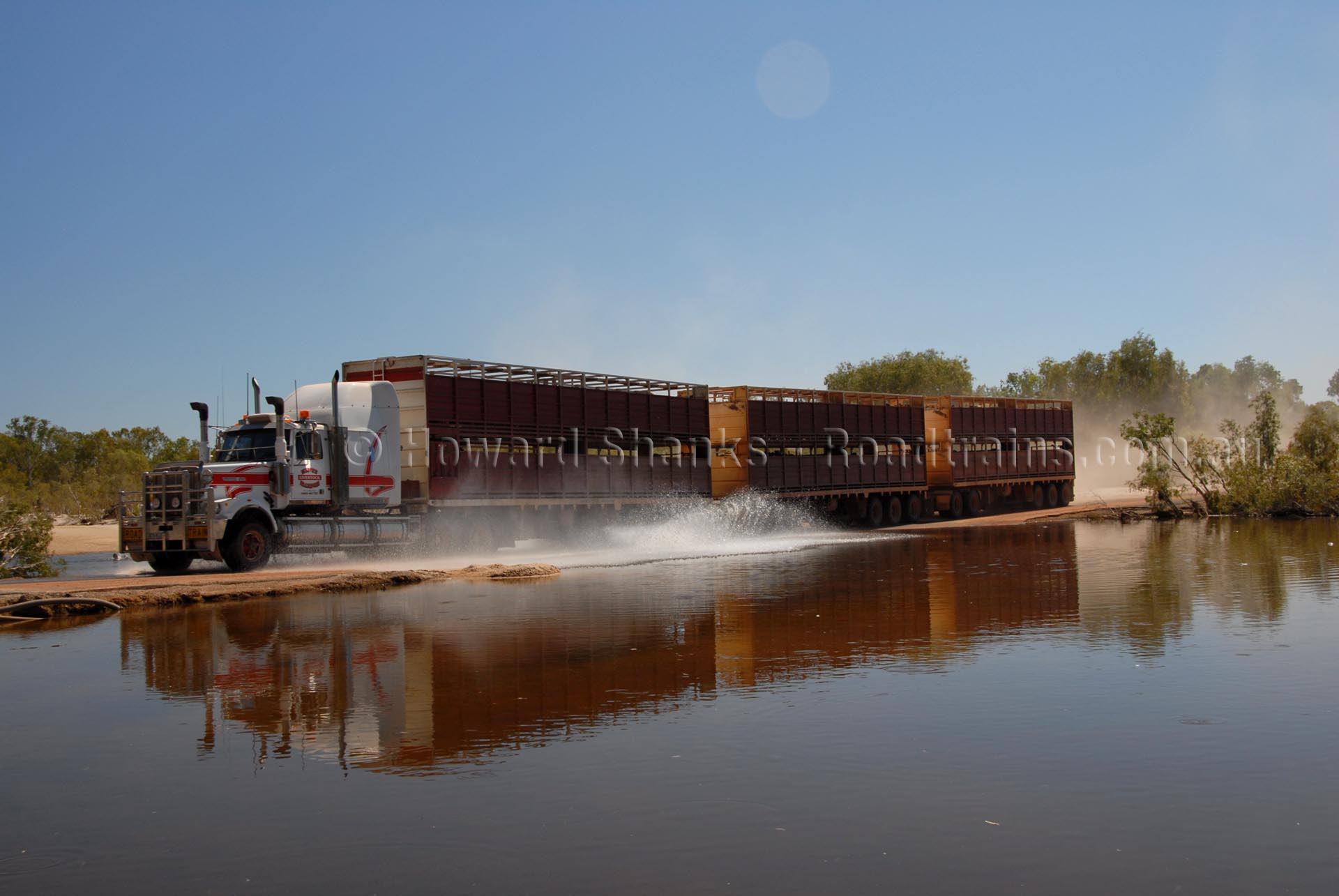 It is a little after six pm in Richmond, northwest Queensland one Tuesday evening late in July, although it could have been any Tuesday evening for that matter. The main street is quiet and desolate, apart that is, from a few young boys riding their bikes leisurely away from the general store and a dog’s solitary bark off in the distance.

Out on the northern outskirts of town at Hintz Livestock Transport’s yard a yellowish brownish glow from the dust stained lights, lit the Western Star 6900 connected to three livestock trailers parked in the shed. Hintz Livestock Transport is company founded by Scott’s father, Steve, who normally drives this 6900 Western Star however this week was enjoying some well-earned time off.

Scott was born and bred here in north west Queensland and in a decade or so of trucking has been up and down just about every track in the region that you’d expect a truck to go, and few you wouldn’t at least once. Scott, like most folks up this way is of an easy going good humored pleasant nature. Even so, he has little time of idle chatter and doesn’t mince his words.

Tonight was the start of a 1400 kilometer round trip to pick up cattle at Riverview Station 600 or so kilometers to the north and deliver them to cattle station west Julia Creek, over some pretty rugged dirt tracks with a few tricky river crossings.

Scott turned the key, flicked down the headlight switch, pushed in the park brake button and eased out the clutch, he and his Western Star 6900 were heading northward, with huge bullights blazing into the darkness. 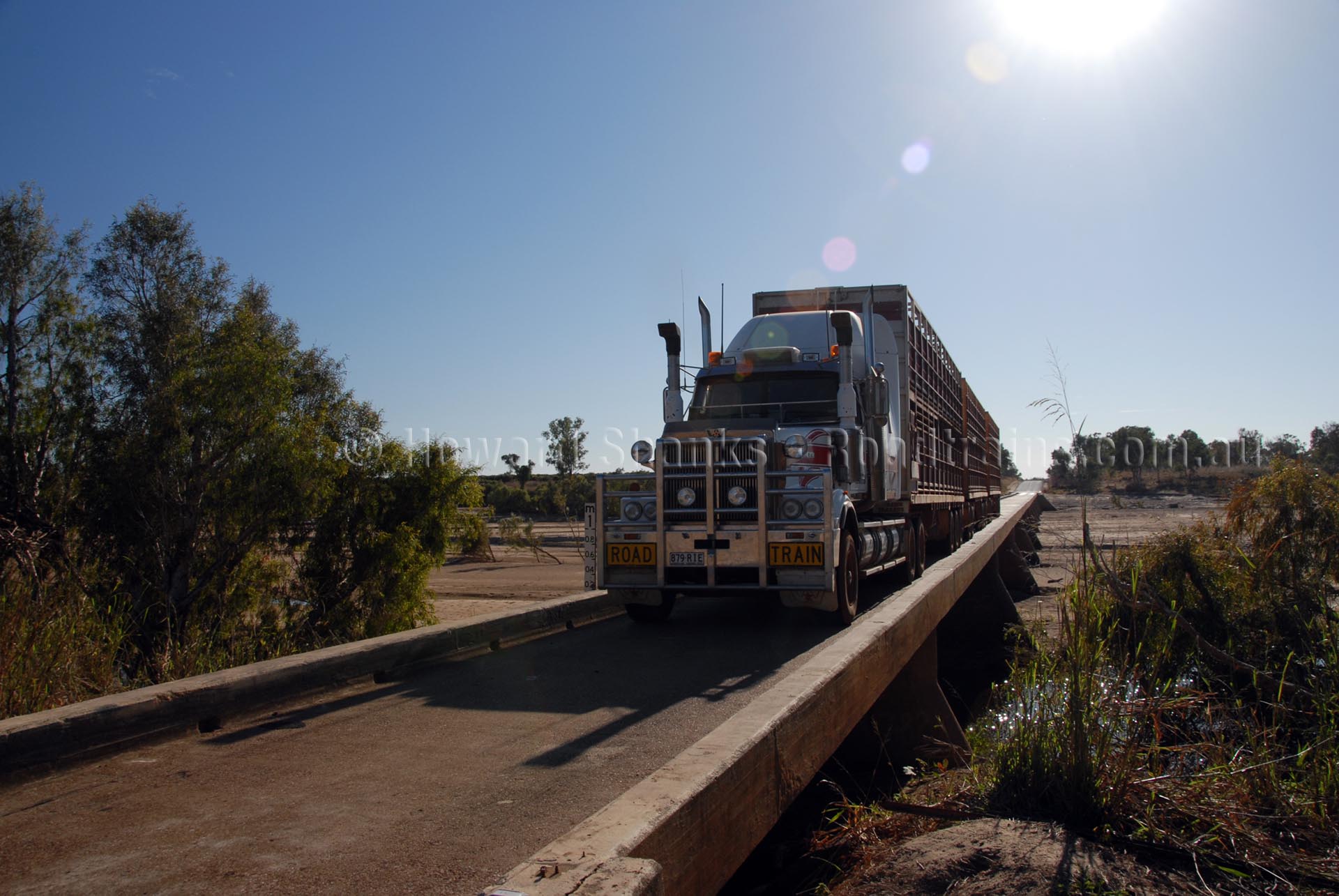 Tonight Scott aimed to pull up at a crudely marked intersection to another station roughly four hours away, on the corrugated dirt track known as the Esmeralda Road. There are no roadhouses out this way and Scott would cook himself a meal using the microwave fitted in the bunk. Then he’d push on into the night for a few more hours before pulling up at a parking bay near the picturesque Gilbert River for the remainder of the night.

“Rough!” Scott explained as he peered into the darkness. “I don’t think many people really understand or appreciate the meaning of the word until they’ve done a trip or two up here. But that is how it has been for years and there are not too many trucks around that can handle conditions like these, day in day out other than these big 6900 Western Star’s. What makes Western Star trucks stand out in the crowd is the service they provide, not just from an after-sales point of view, but the serviceability of the truck itself. That to us is vitally important, we are in the service industry and at the end of the day we are only as good as the equipment we use, and that is why we like the Western Star product so we can provide the best service to our customers.”

It was still dark when the alarm clock went off in Scott’s bunk. He pulled on some well worn boots and climbed from the bunk before turning the key and the big-hearted Cummins leapt into life. Outside, the wildlife by the river was busily waking with Australian Swiftlets, chirping the morning in. Scott strolled around the roadtrain, checking the tyres and trailers while the Cummins under the hood built up air-pressure.

There was only a short 15 minute drive to the aptly named Riverview Station, where the station house has a spectacular view of magnificent Gilbert River which Scott needs to cross. Today the crossing is easy and the road recently graveled, only a few weeks before there was three feet of water charging past this crossing and back in the peak of the wet season it was three meters deep. 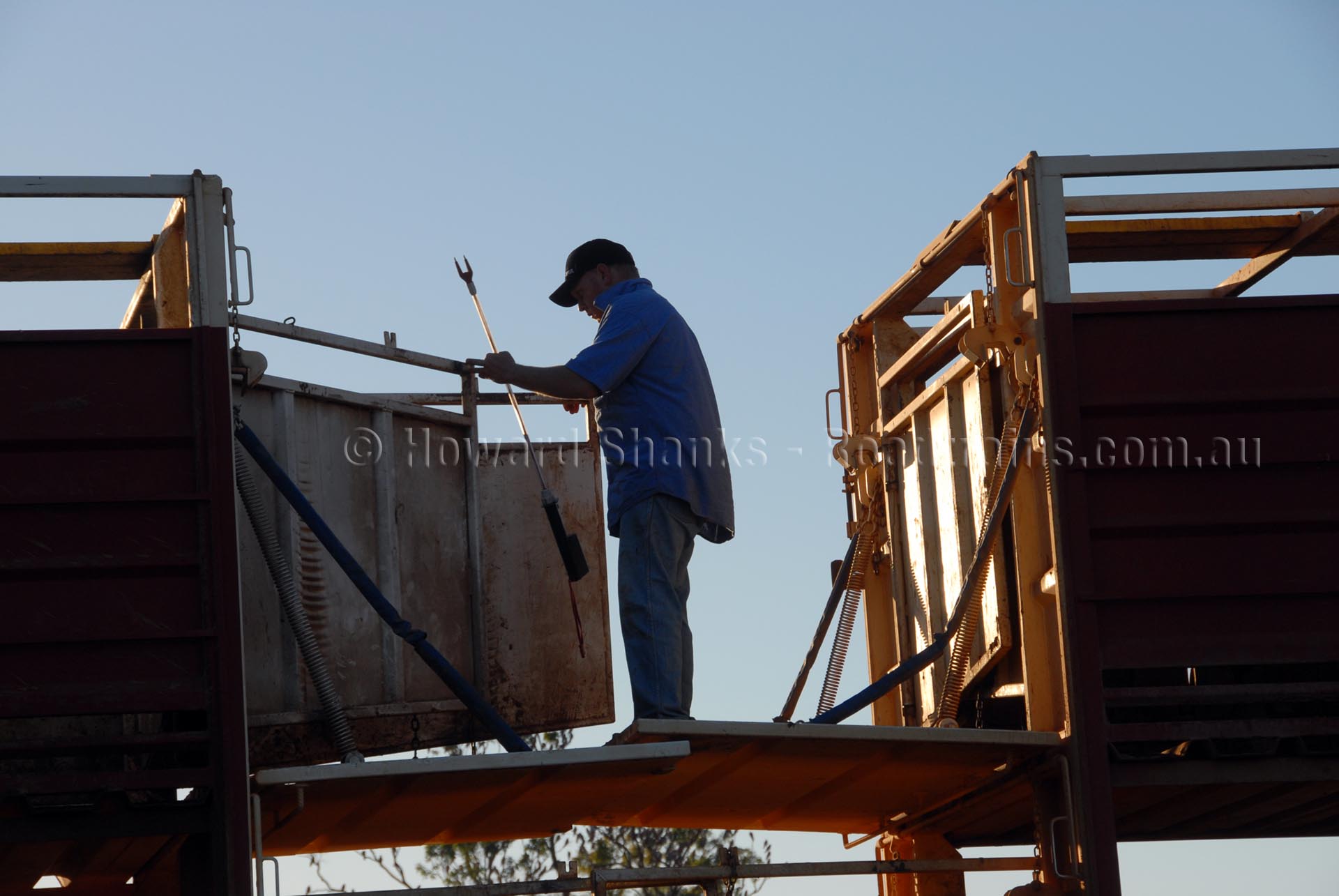 Scott admits that one of the biggest challenges for station owners and cattle haulers is juggling the rains, because up in this country it doesn’t take much rain back up in the headlands to start at raging torrent downstream which can cut off a road for weeks.

“It’s not a lot of fun either when you’re stuck on the wrong side of the river,” Scott added.

Dust lazily rose up from the yards as the cattle gently stirred in the dawn light. Scott pulled his lead trailer along side the yards just as the sun peered over the horizon. He can load the entire roadtrain without shifting it, using what’s commonly referred to as a through loader system located on the front and back of each trailer.

It is merely a series of doors, that form a walk through platform for the cattle to walk through to the next trailer, hence the name ‘through loader’.

Once Scott had all the through loader doors open, the station hands began opening the yards and letting the cattle run onto the trailers, one pen at a time. It takes roughly half and hour to load the entire roadtrain. Today Scott would load approximately 150 weaners, bound for a station west of Julia Creek some 600 kilometers again over some rugged dirt tracks, river crossings and rutted washouts. 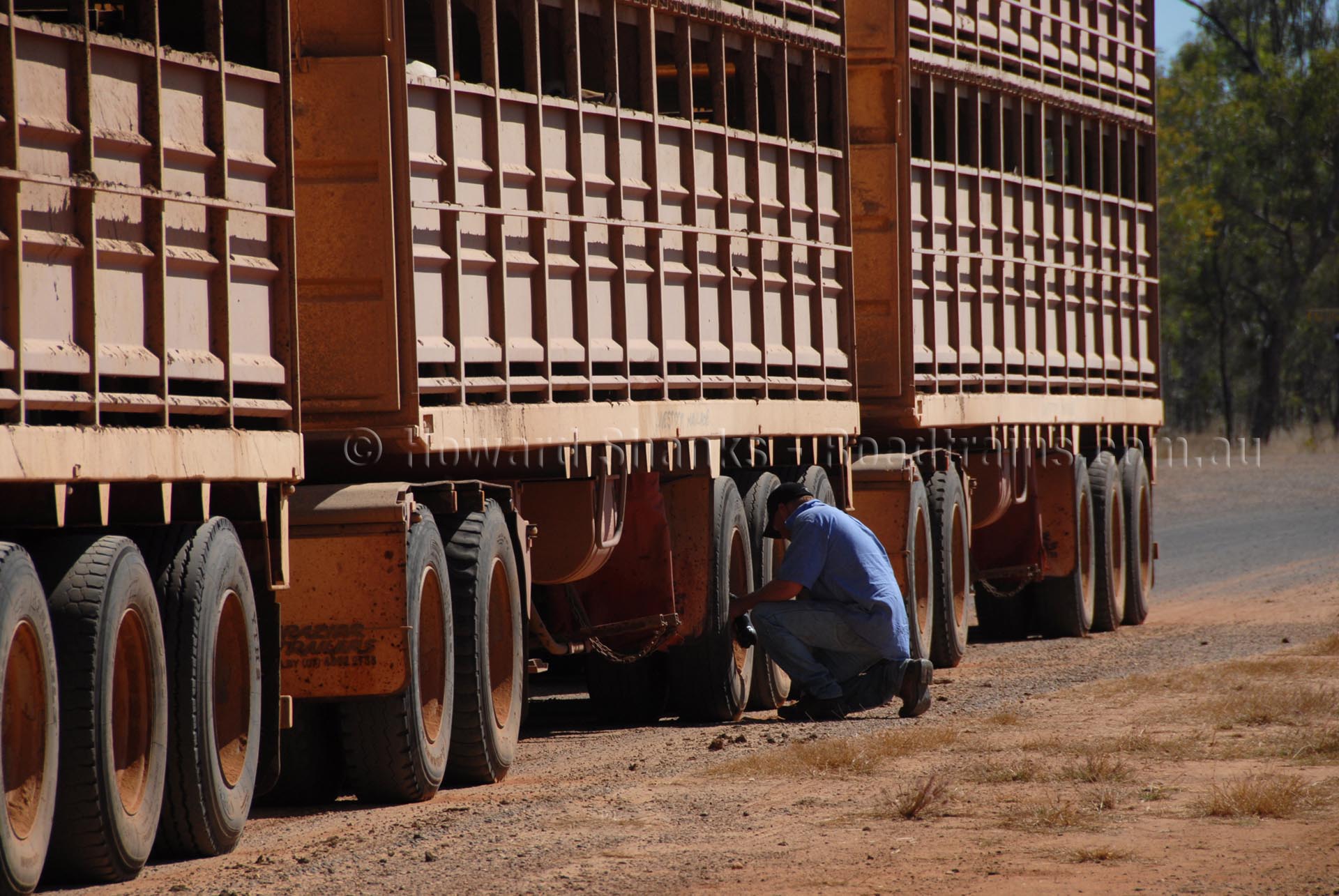 With the paperwork complete and friendly wave from the stations hands, Scott guided the fully loaded Western Star away from the yards. His first river crossing would be the Gilbert River in front of the Station house.

Now fully loaded, with all his axle locks engaged, Scott held the throttle on the Cummins at a steady pace, just enough to get the 6900 Western Star to climb out of the river and onto the hard roadbase, but not too much power that would cause the wheels to spin which would see him bogged in the riverbed.

It’s a delicate balance, he admits.

Once out on the bitumen, he takes a left hand turn on to the Gulf Development Road, for an hour or so, then he heads left down a track marked only by a simple sign that says ‘Richmond’. A little further inwards another signs warns ‘No Fuel for 370km’, there is little out here other than wandering cattle, kangaroos and the odd croc or two so we’re told.

Here at the start of the dirt run to Julia Creek, Scott stopped, checked that all the cattle were standing and travelling okay. It’s something he does every hour or 100kms. As he walked around the roadtrain he noticed a wheel bearing on the middle trailer was low on oil, so he topped that up before cooking himself a well earned breakfast.

As the morning wore on so to did the miles, the trailers clanked and rattled over every bump and pot hole while a huge plume of dust, that could be spotted on the space station, rose behind the Scotts 6900 Western Star roadtrain on the long dirt track. 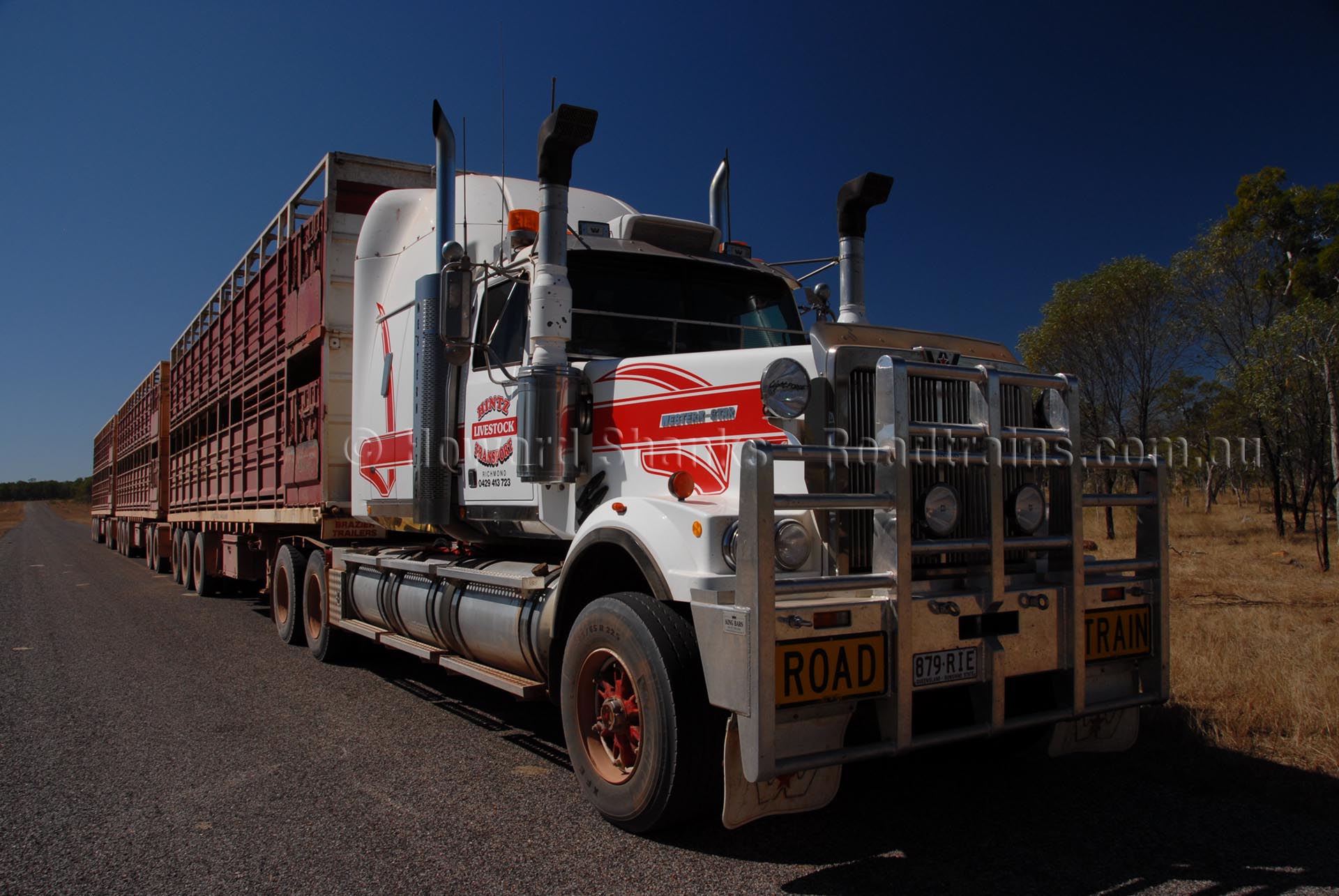 Scott admits he and his father are more than impressed with the reliability and service of their Western Star 6900 and equally impressed with the power and reliability they get from the 600 horsepower Cummins and 18-speed Roadranger. They’re running the Meritor AC-6T 6-Rod suspension with Meritor RT52-185 rear axles, which is the preferred speck for cattle haulers up this end of the country.

It would be just on dusk that night when Scott would pull alongside the yards at Julia Creek where he’d unload the cattle for the night and enjoy a well earned rest himself. 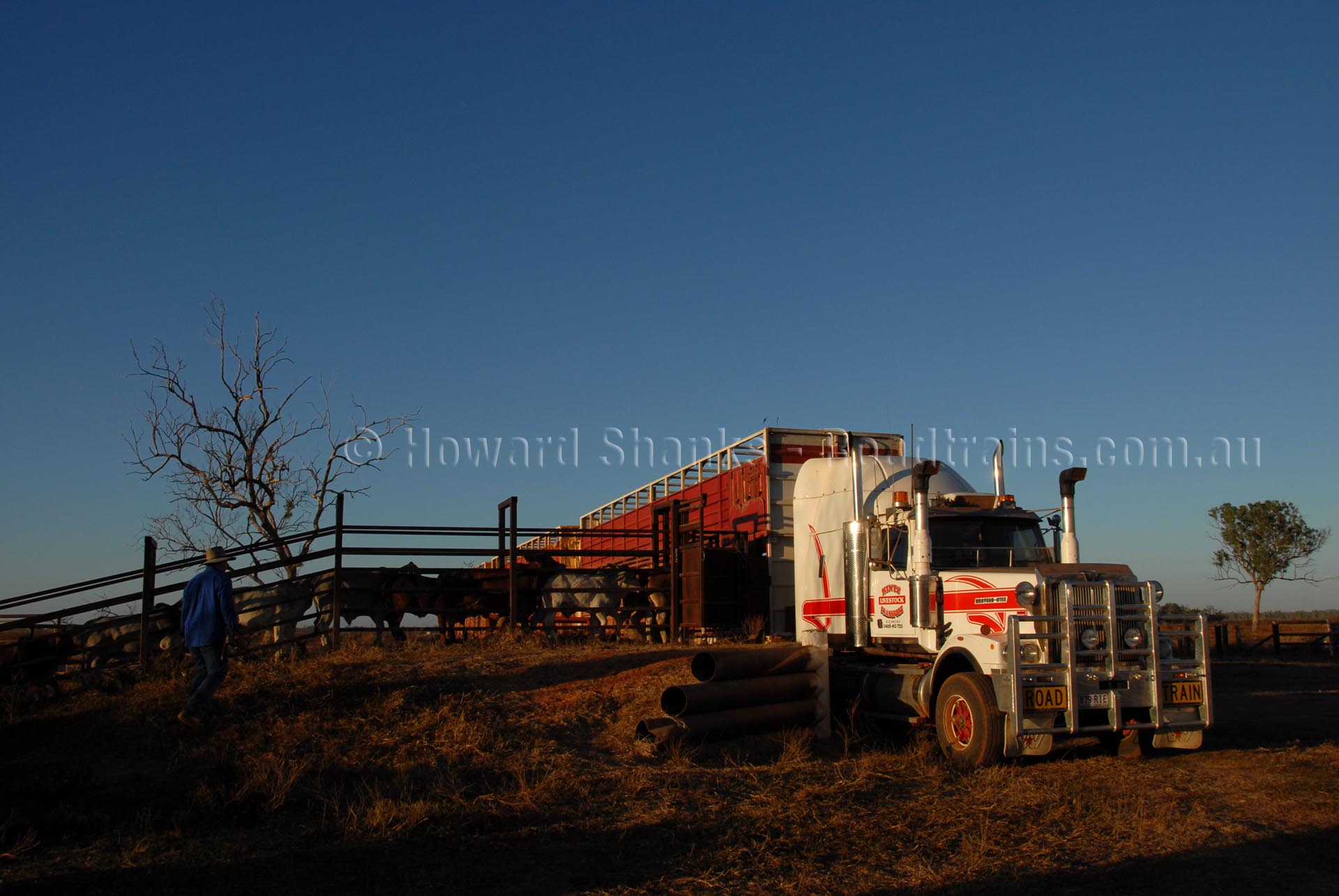