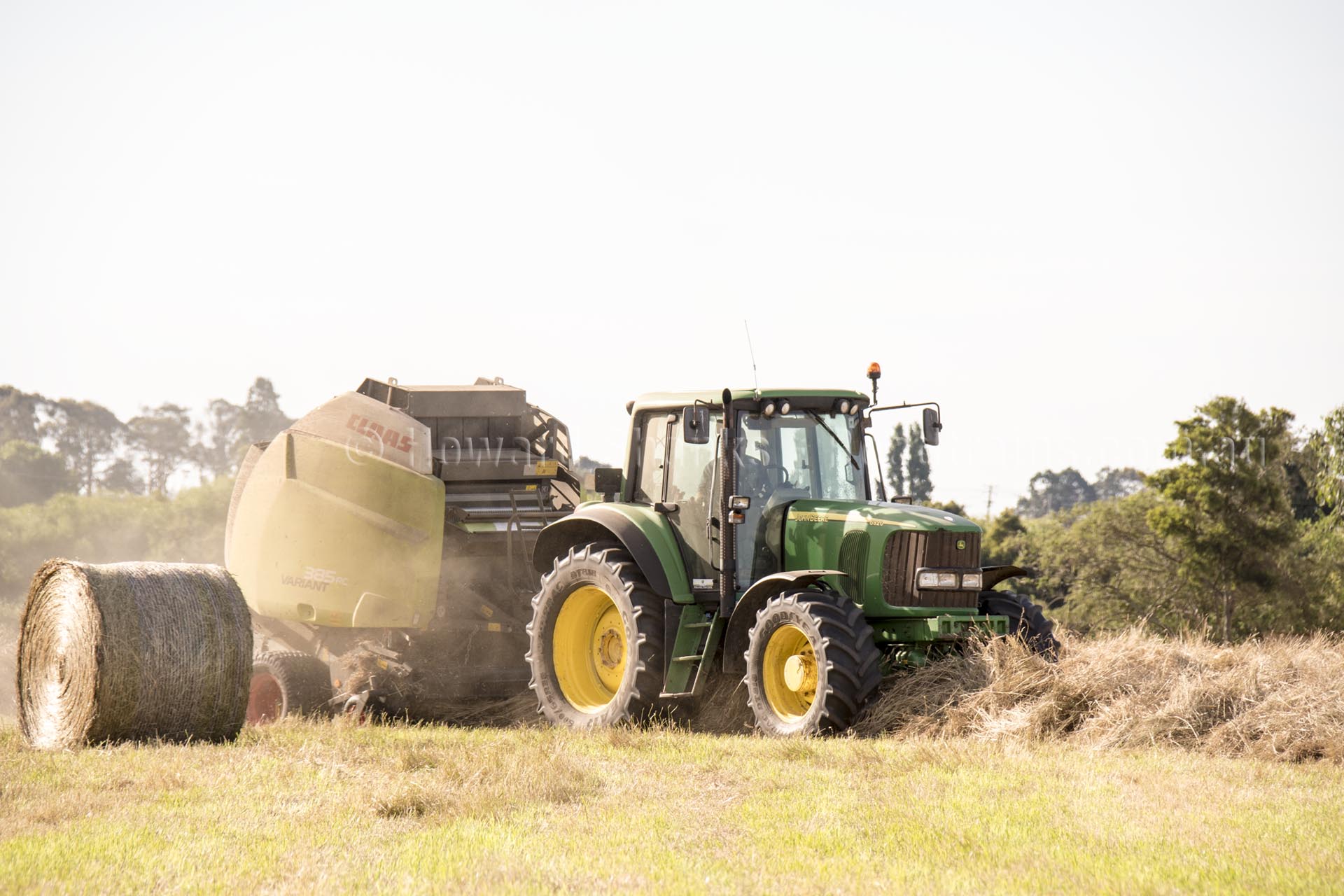 With three bumper hay seasons under its belt this Claas Variant 385 RC round baler is still pushing out high density bales at an average rate of one per minute as Howard Shanks discovered in the fields of North East Tasmania.

Timely, good spring rains produced exceptional growing conditions for farmers and hay producers in the North of Tasmania this year.  The grass in the paddock had stood 1.5 meters tall only a few days before. Now it lay raked into long neat windrows waiting for the baler to arrive.

Scottsdale based Peter Lette has been making hay for more years than he cares to remember and concedes the evolution in hay production machinery has been for the better.

The investment in the Claas Variant 385 RC round baler was an informed one made only after careful consideration comparing detailed specifications to ensure the production of quality bales without sacrificing productivity. Added to this was the reliability and committed back up service.

In recent times there has been a push to produce higher density heavier bales in an effort to reduce hay production and transportation costs. 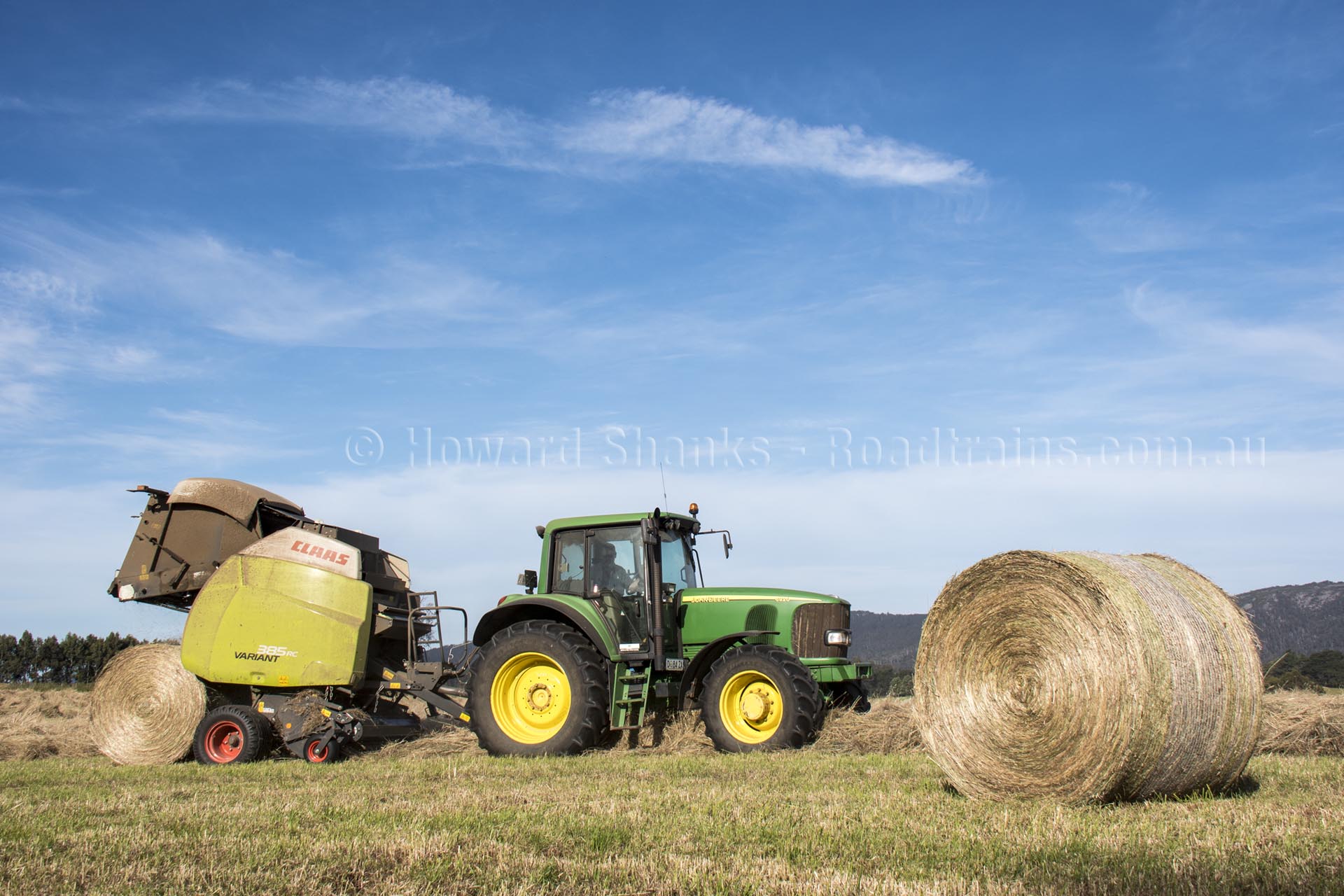 The investment in the Claas Variant 385 RC round baler was an informed one made only after careful consideration comparing detailed specifications to ensure the production of quality bales without sacrificing productivity.

The Claas Variant 385 RC is one of a number of balers in the market place capable of producing high-density bales.

A meager 25 per cent increase in the traditional bale’s weight equates to 25 per cent fewer bales in the field with the same amount of hay is baled. That means a quarter reduction in the twine used.

These heavier bales allow transport operators to better load their trucks to the maximum axle weights. This means cheaper freight costs for farmers, because cartage is normally calculated by distance travelled. Therefore by increasing the weight carried on the truck by 15 per cent means that a freight bill that in the past worked out at $30 per tonne is now reduced to $25 per tonne.

There are other advantages too, denser bales mean the machinery is more productive with less stops to unload the baler and consequently less movements picking up bales in the paddock. Furthermore extra hay will fit in the storage shed.

However, many farmers agree that when you’re baling with higher pressures and higher densities the conditions have to be spot on. 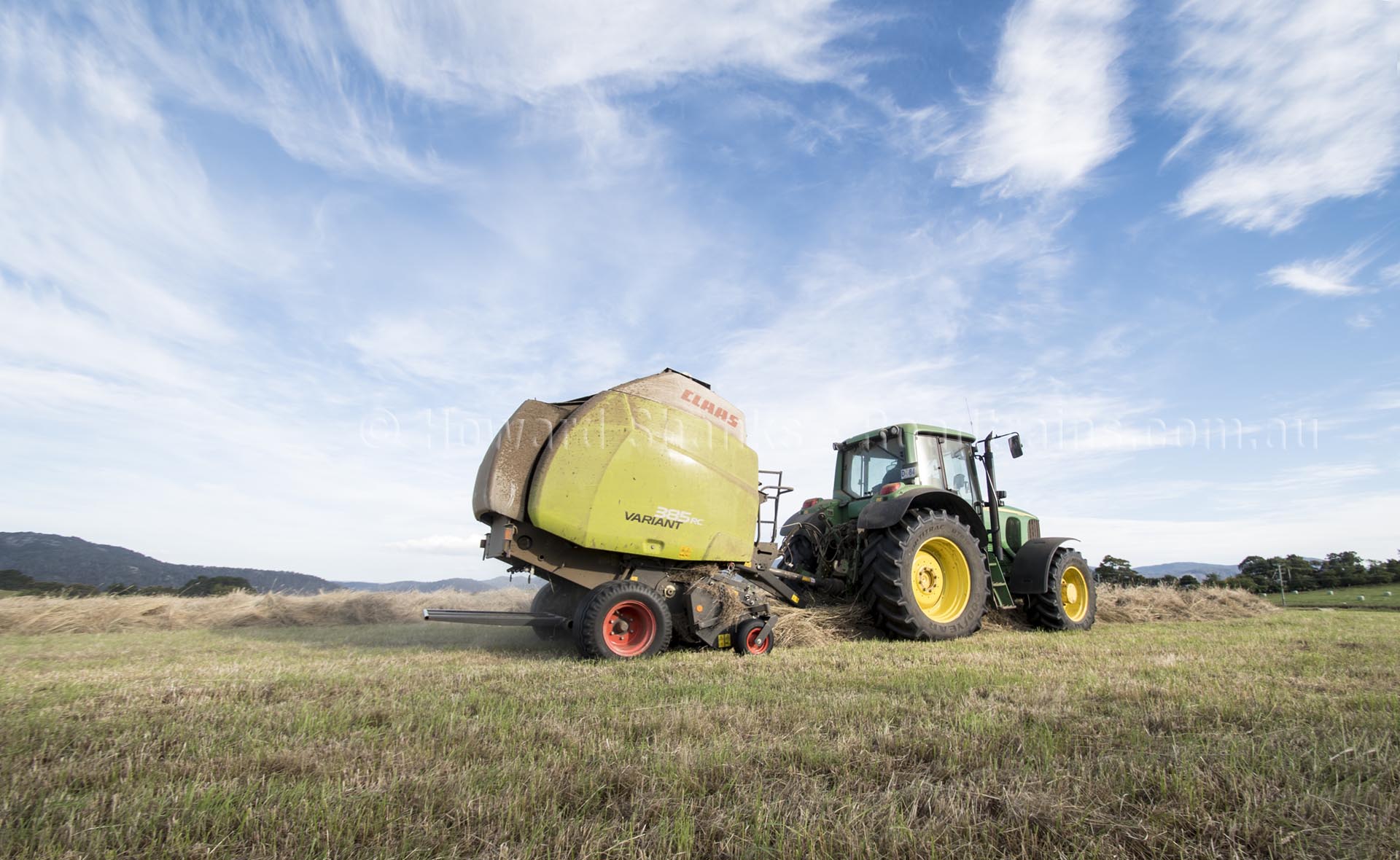 That’s because there is danger that unless the hay is properly cured and not baled with too much moisture, it can create a bit of a pressure cooker with issues such as fires or the bale going off.

Admittedly some farmers argue that the rock hard core of some higher density bales make it harder to drive the bale spike through when they are handling the bales so they can feed out.

However the versatility of the Claas Variant 385RC means that by adjusting the belt tension during the initial stage of rolling the bale it produces a softer core for better handling.

Some farmers prefer bales with softer outer shells that reduce the amount of twine required to hold the bale together, while others prefer tighter outer shells that are ideal for outside storage. However the flexibility of the Claas Variant 385RC means that the belt tension can be controlled through different stages of the bale rolling process.

However, a rock-hard core means it’s harder to drive a bale spike through them when you want to load one on to a feeder and they can be harder to feed out. 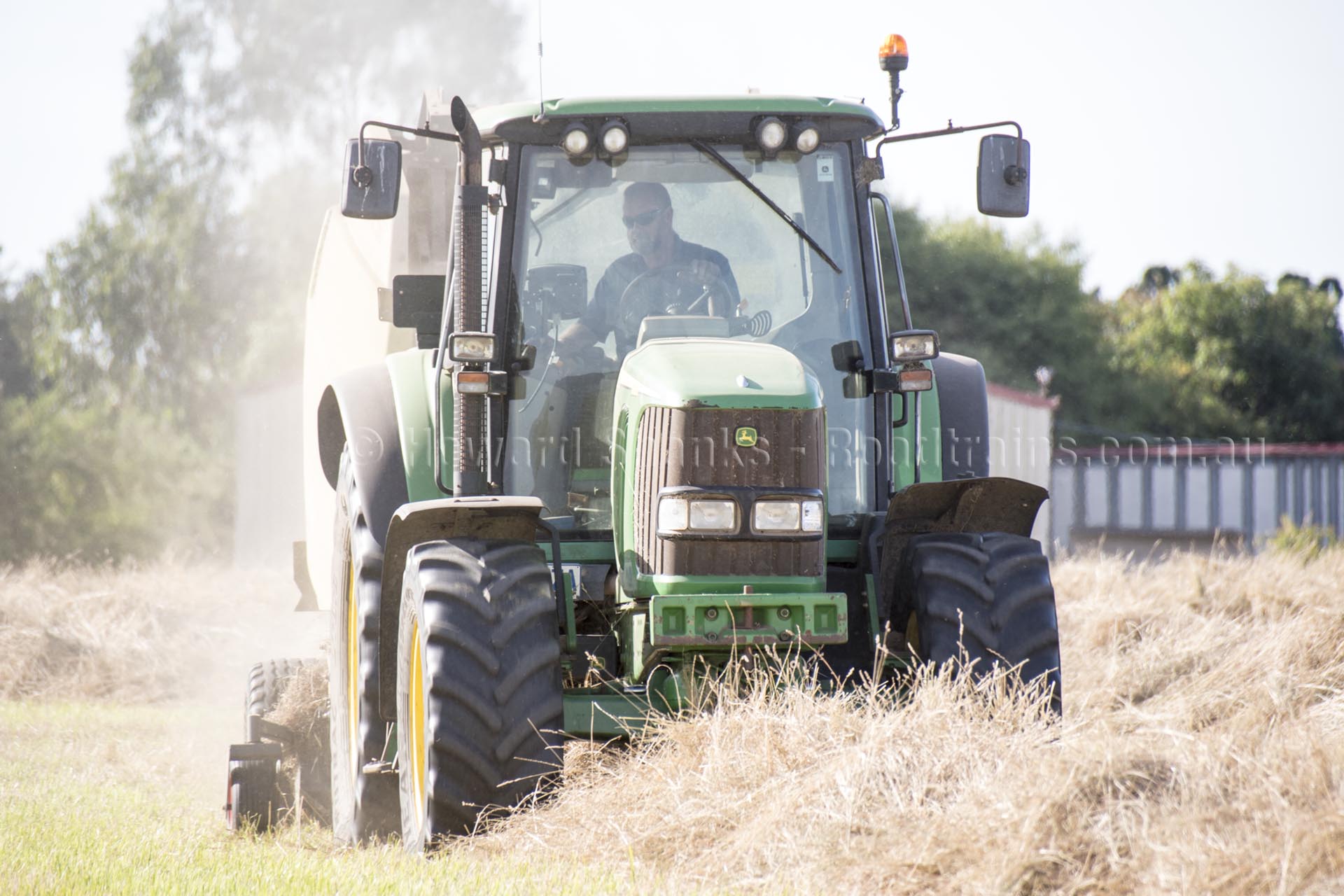 Control of the belt tension at different stages during bale rolling can alter the density of the bale at different locations.

The Claas Variant was the first round baler on the market with a 2.1-meter wide pick-up. Ideally the raking width of the windrow should be set to maximum of 1.9-meter to ensure no wastage.

The standard feed rotor on the Claas Variant delivers a uniform crop flow into the bale chamber and it is designed for rugged performance. All components demonstrate high operational reliability and long service lives, no matter what crops you plan to bale. The Claas Variant operates with a PTO shaft speed of 1000RPM to achieve, high rotor and conveyor speeds that in turn accelerate the bale formation process, equaling higher productivity and faster work rates.

The heavy-duty drive train in the Claas Variant Series balers ensures top performance in the toughest crop conditions. They are equipped with a durable gearbox to increase throughput; while the baling belts are seamless for reduced wear points, and the 1.25-inch (31.75mm) drive chains are designed for years of trouble free use. However add the optional CLAAS automatic lubrication system, and the drive chains have an even longer service life. 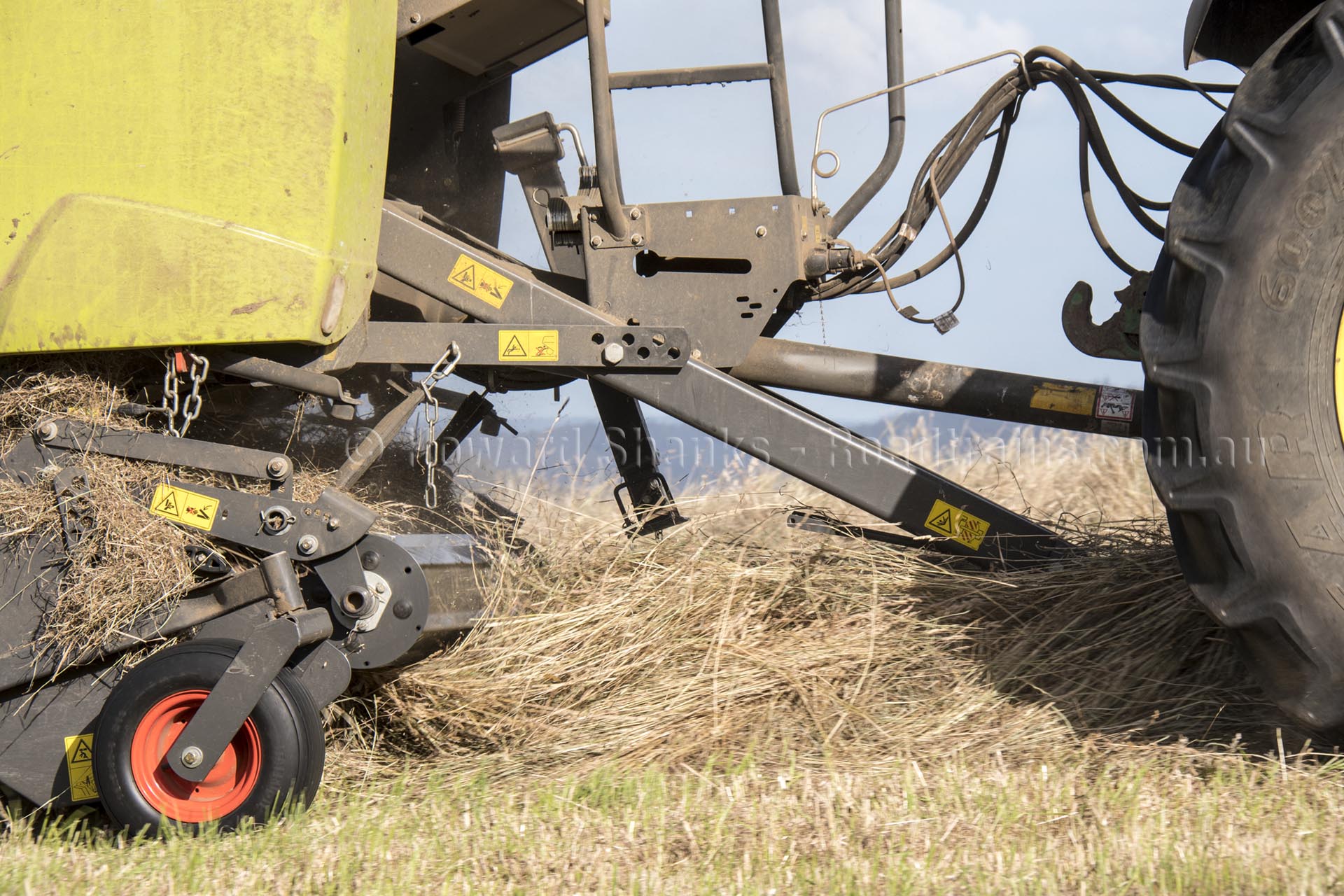 The positive bale rotation action means that the hay flow doesn’t have to change direction as it moves from the FEED ROTOR or ROTO CUT into the bale chamber.

When the Claas Variant is used to bale silage, the raked grass moves from the pickup into the chamber, it passes through the 14 unique ROTO CUT knives, which cut the pieces into 70mm lengths. The helical rotor design of ROTO CUT ensures consistent feeding and superior cut and it produces a short chop with high compaction pressure during baling resulting in silage that is rich in energy and gives enhanced lactic acid fermentation – essential for high milk yields.

According to Claas literature, one of the unique features of their FEED ROTOR system, is that the rotor gets the bale turning and forces the bale start – each and every time, under all conditions. This automatic start feature allows the operator to drive and operate the baler at full speed while achieving maximum core compaction and maximum bale weight.

The machine has four seamless belts for perfect bale shape and density compaction. These four heavy-duty seamless baling belts on the Variant also contribute to consistent high performance and bale density. Two cambered rubber-coated rollers drive the belts at 3m/sec, meaning the Claas Variant 385RC turns faster and compresses more densely than most other balers in the market. Furthermore with maximum surface coverage by the four belts, potential crop loss is minimizes. 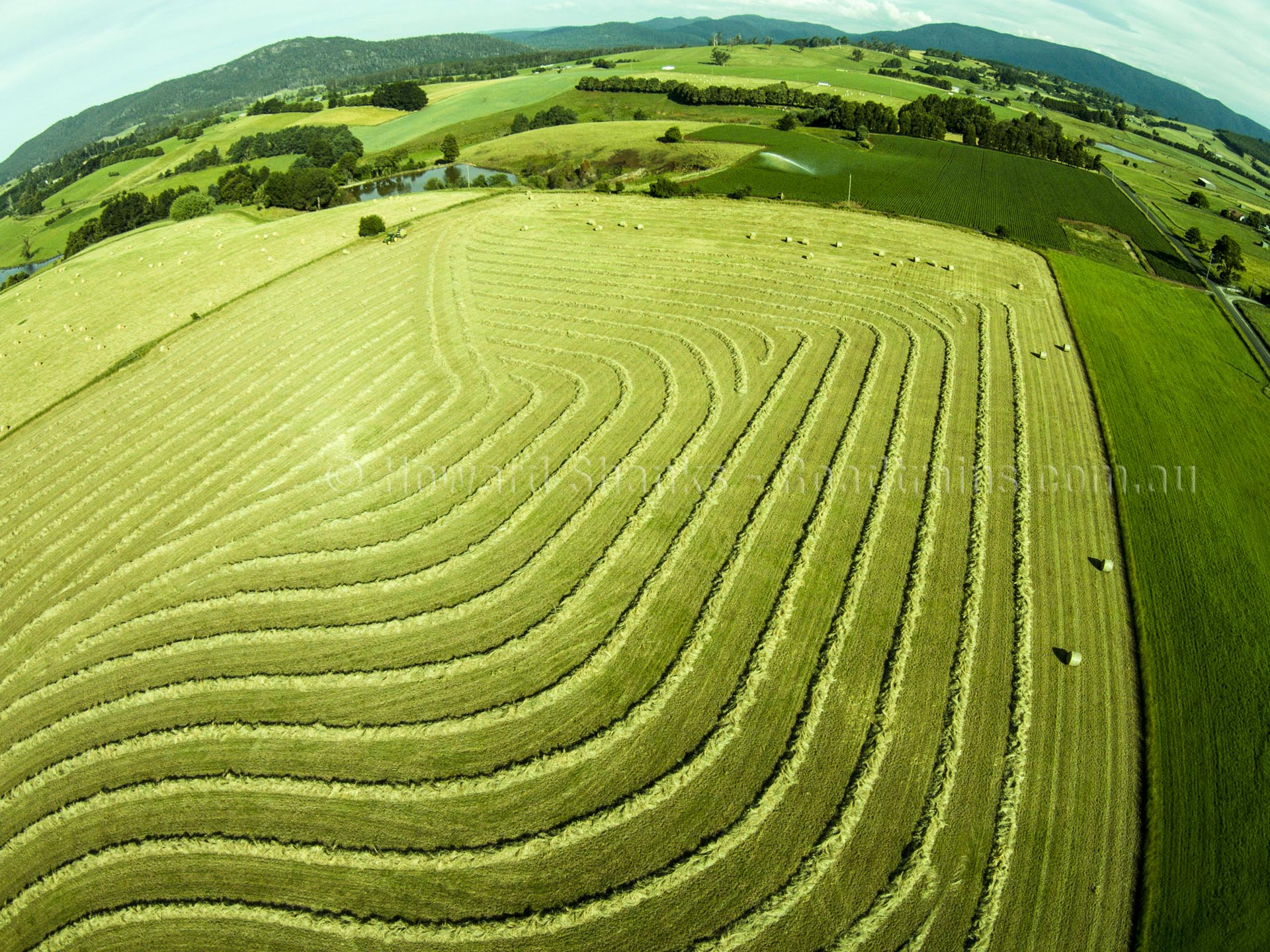 The grass in the paddock had stood 1.5 meters tall only a few days before.

The positive bale rotation action means that the hay flow doesn’t have to change direction as it moves from the FEED ROTOR or ROTO CUT into the bale chamber. This means the bale forms more evenly with the hay fed in more consistently, and it also means even and complete unrolling of the bale when feeding.

The fast opening and closing of the tailgate on Claas Variant 385RC baler means that a perfectly formed and finished bale is deposited within seven seconds, and the operator can continue baling faster. The bale ramp assists so that the finished bale gently drops and rolls away from the machine allowing the gate to close promptly.

Like all CLAAS balers, the Variant 385RC is designed so that wrapping takes place in a highly visible area. This allows the operator to clearly see exactly when it starts, follow the action as it progresses, and know the moment it is finished. 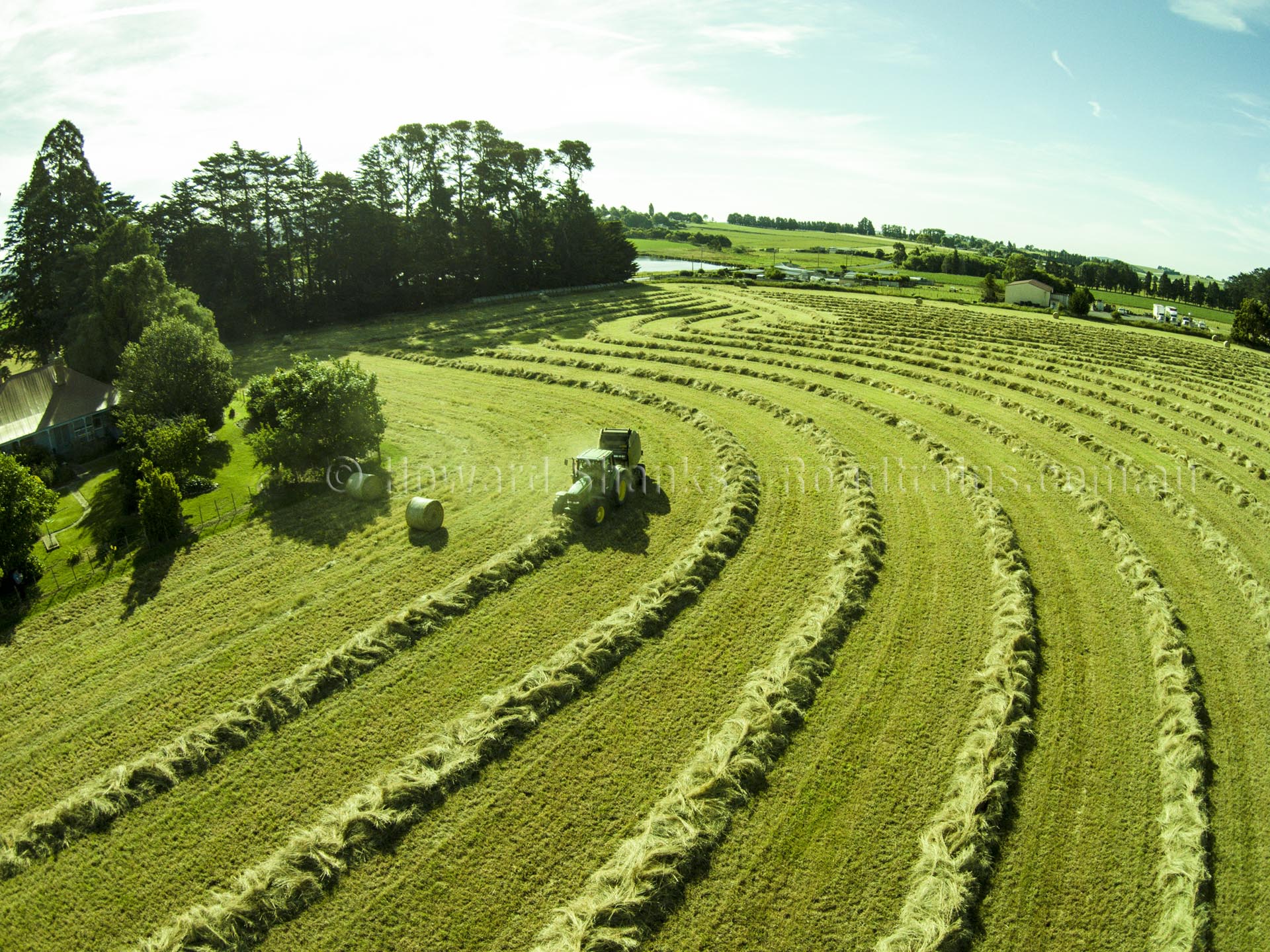 In recent times there has been a push to produce higher density heavier bales in an effort to reduce hay production and transportation costs.

The Claas Variant 385RC is equipped to operate with 1.2-meter “Edge to Edge” net wrap while transitioning from one size to the other is as simple as moving a few pins. Plus, with the optional COMFORT tying system, the operator can set the number of wraps from the cab to only use the required amount of net wrap for each bale size or conditions, this allows for more secure binding and easier transporting.

To date Peter admits he is happy with the Claas Variant 385RC and added that its stability in the steeper paddocks was a huge advantage.

“In good going like this flatter paddock I’m in now I can bale approximately 590 bales in an 11 hour shift which is means it’s roughly spitting out a bale every minute,” Peter revealed. “So the efficiency in the baler is definitely there and so far it’s been a damn reliable machine.”