Secret to Reversing a B-Double & Semi-Trailer

I often get asked what is the secret to reversing a B-Double? This article should put your mind at ease, as it explains the fine art of reversing a B-Double in simple terms. Basically, it can be broken down into three uncomplicated steps; have a plan, understand the surroundings and finally remain calm about the process from start to finish. 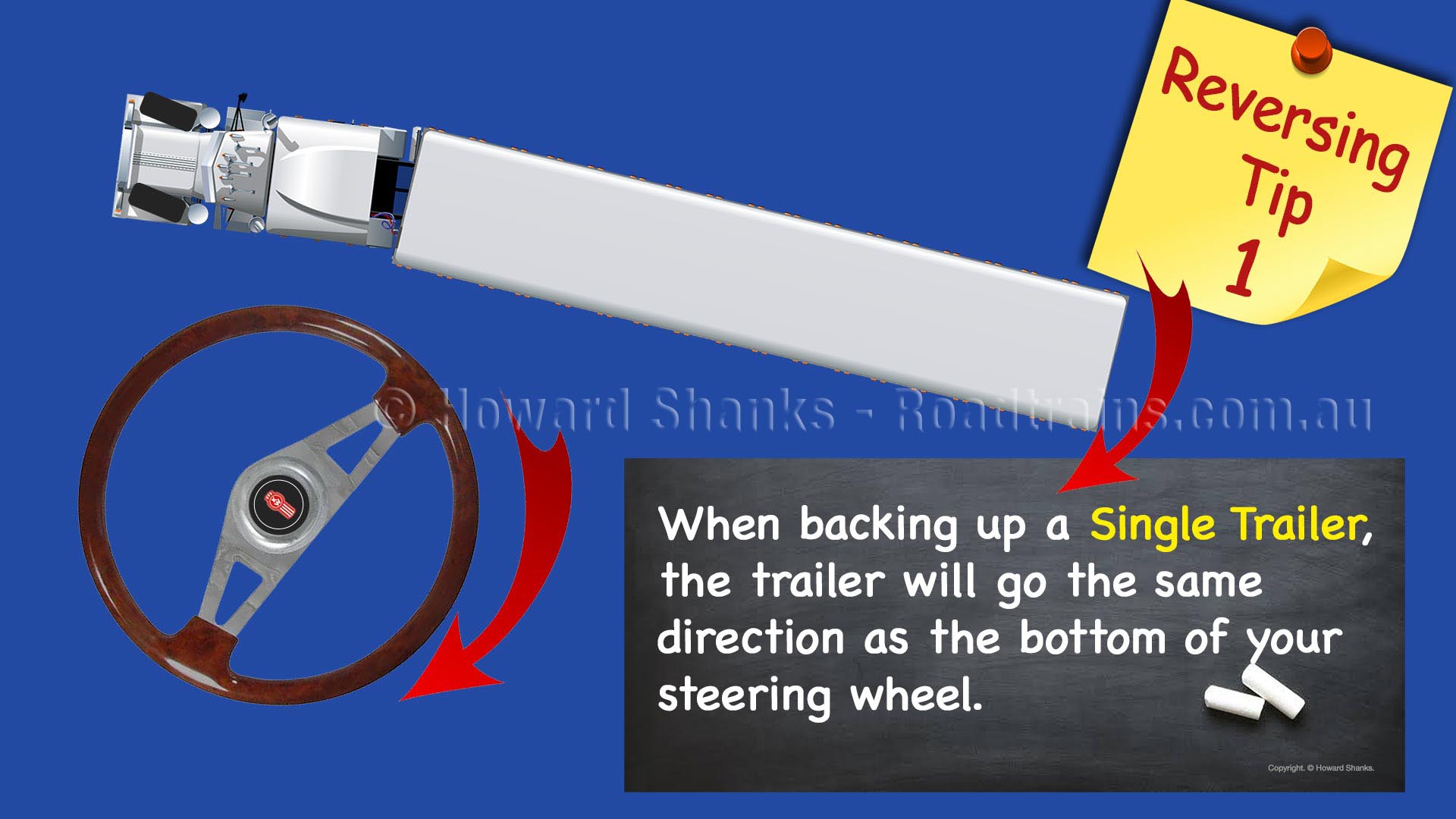 Operating any type of commercial vehicle whether it is a rigid or heavy vehicle combination you’ll quickly discover that many of your clients have exceptionally tight spots to reverse into. In fact, some places where we’re expected to load or unload seldom appear large enough to squeeze a trailer into. Reversing a truck is not an option, it’s part of the job. It is something we get to practice over and over, often several times a day. Consequently, over the years many young drivers have asked me how to reverse a semi-trailer and in more recent times how to reverse a B-Double closely followed by a request for tips to make it easier.

Bizarrely, it’s believed that as much as 98 per cent of Australian B-Double drivers cannot reverse their combination. In this technical feature, I’ll endeavour to describe some of the basic principles on how to reverse a semi-trailer and B-Double. However, if you’re reading this from somewhere other than Australia, bear in mind that the following tips involve prime movers or tractor units with the steering wheel on the right-hand side of the vehicle. Regardless of what side of the vehicle you steering wheel is on, generally speaking, it is a lot easier to reverse the truck from the driver’s side which is how it is explained in this article. 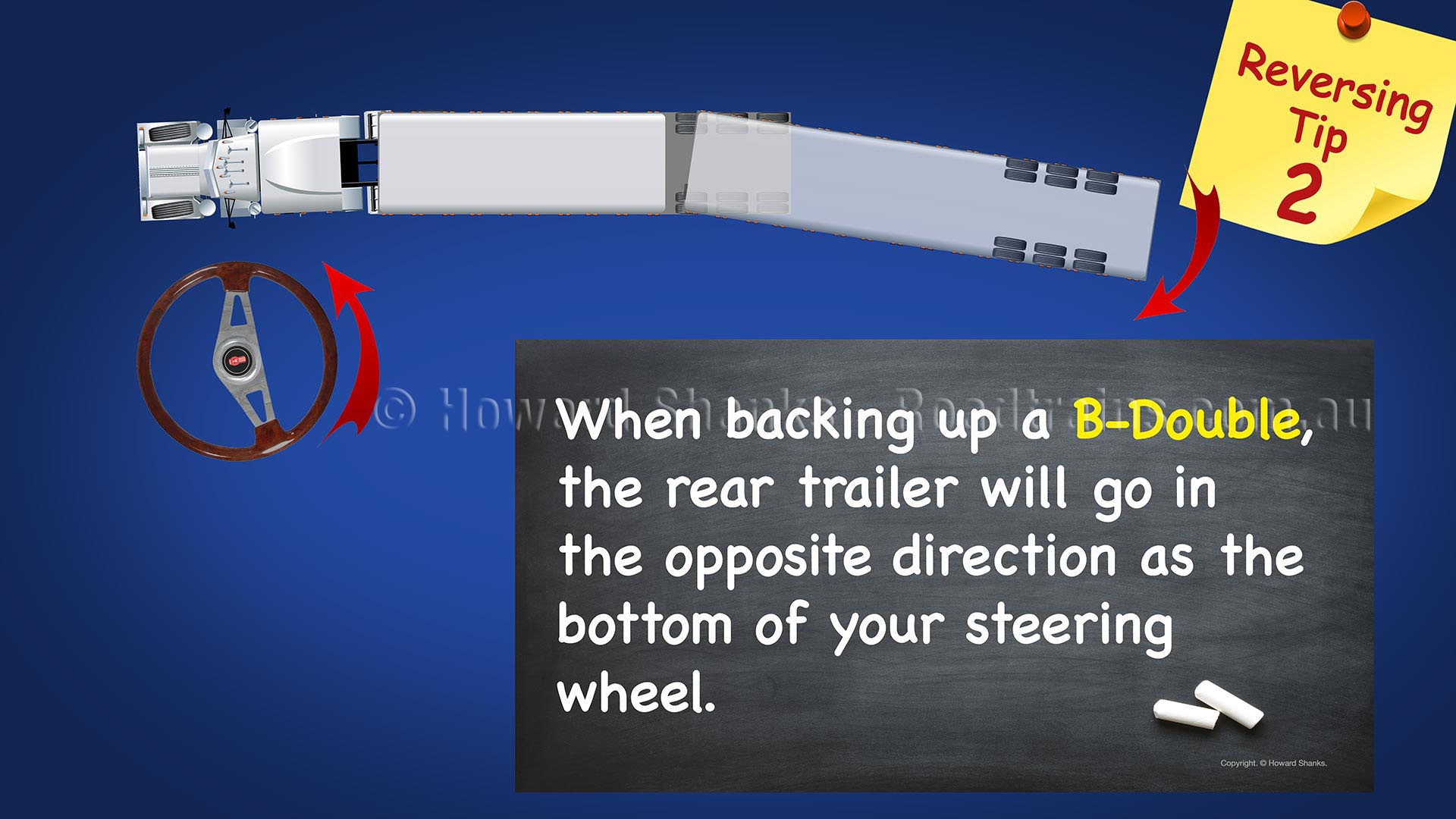 Is an acronym for “Get Out and Look”, this is the first step in the reversing process. It is vitally important to inspect the area where you wish to reverse into to ensure the is enough clearance on either side and above for the trailer to fit. Don’t be afraid to place a small object, such as water bottle, on the ground to use a marker to back the trailer up to if required. You can place your marker on the ground when you do your first walk around and collect it once you have completed the manoeuvrer.

Remember too, it’s easier to stop, get and out check at any time during your reversing manoeuvre if you are unsure. This allows you to make any corrections required before you do any damage to the vehicle or surroundings.

Which way to turn the wheel? 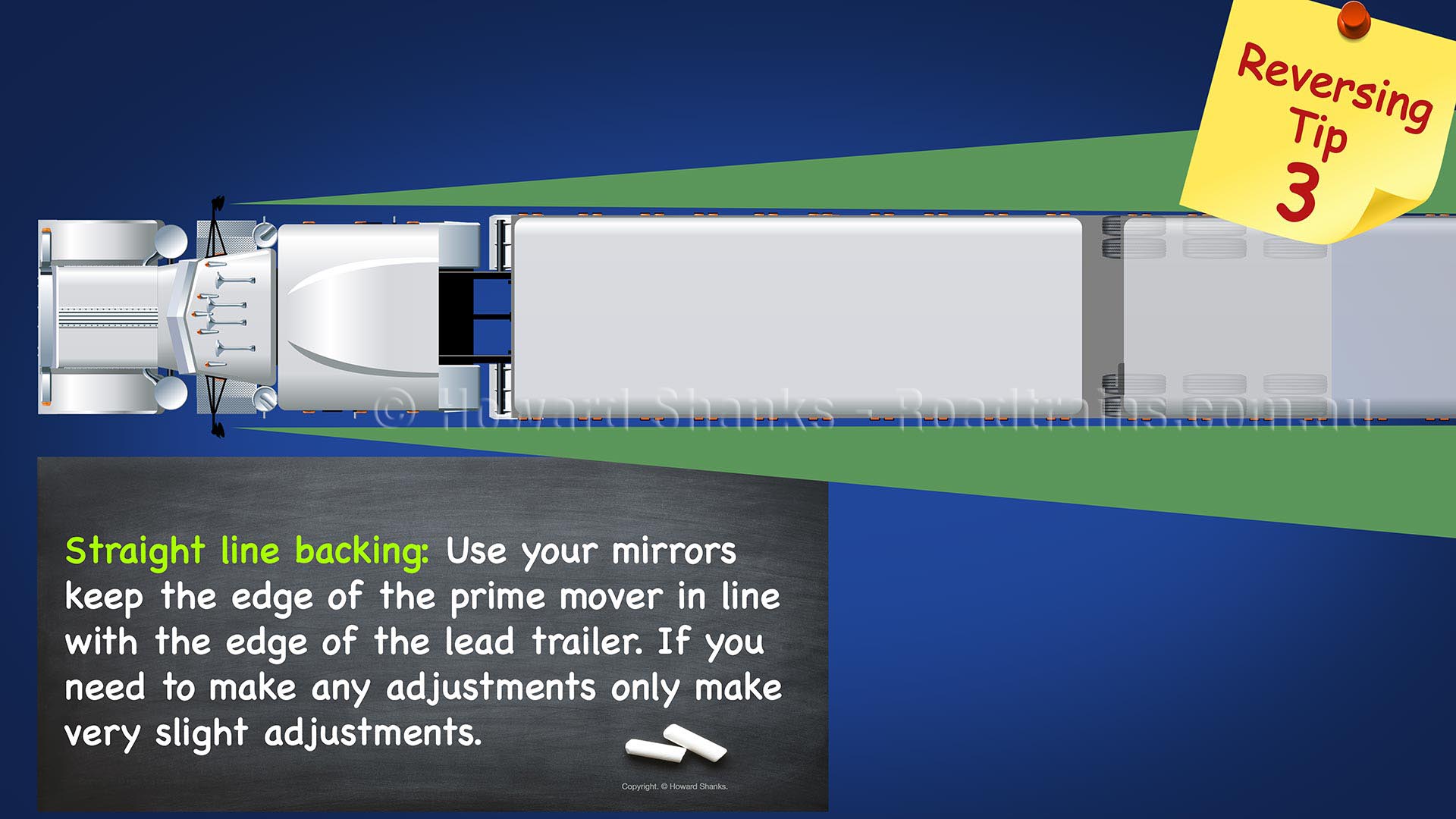 Bear in mind that it is a lot easier to add more steering input than it is to fix “too much” steering. 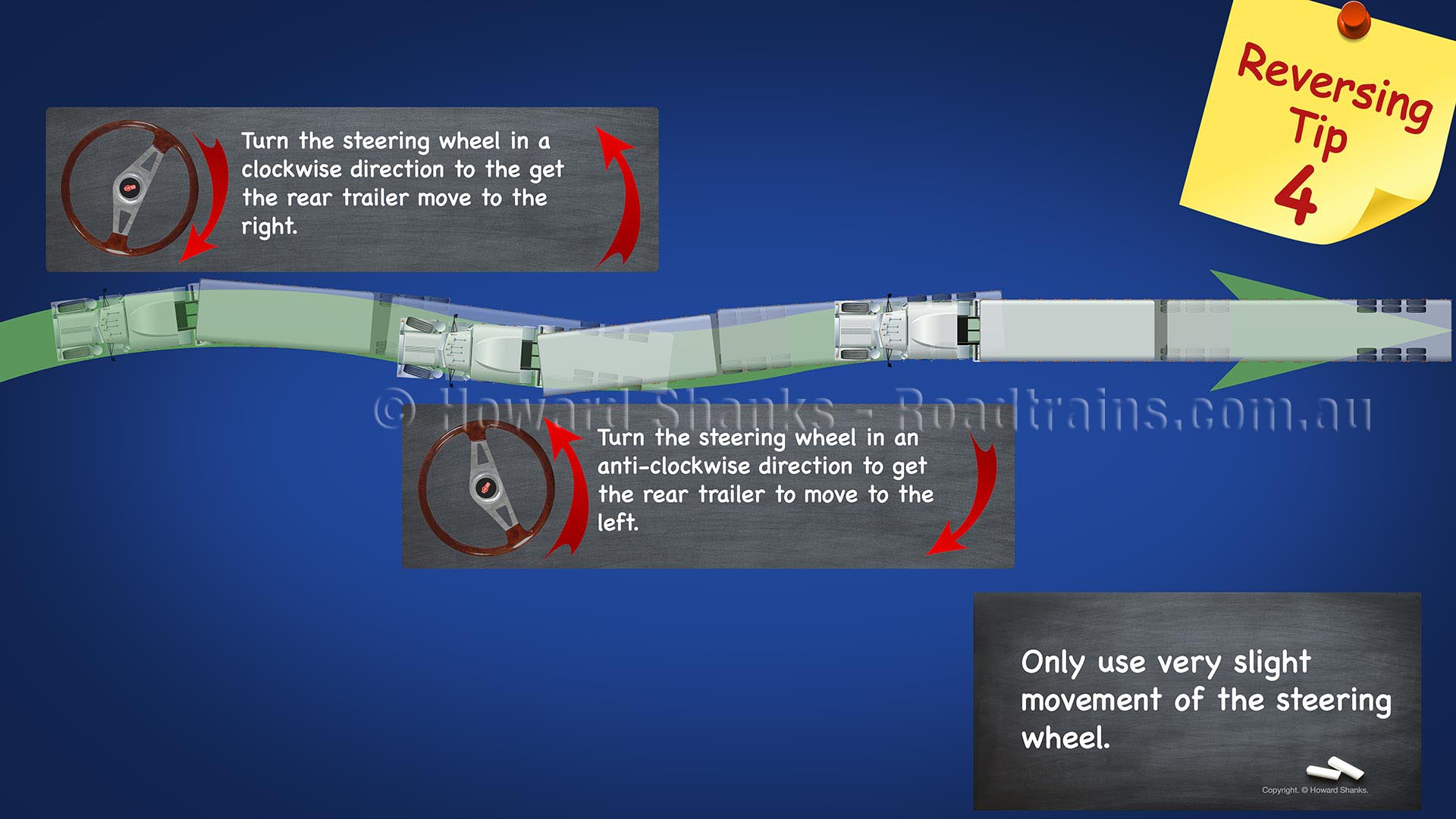 Keep looking into your mirrors as you’re reversing in a straight line. Make sure you’re doing this as slowly and gingerly as humanly possible! More of your trailer should begin to appear in one of your mirrors, so begin moving the bottom of the steering wheel towards the opposite mirror. Your trailer is going to begin moving in the other direction. Remember that you only need small steering gestures from side to side to continue to keep the trailer going in a straight direction.

If the trailer does end up getting too far out of line, just pull it forward to straighten it up then commence the reversing process again. Importantly don’t blame yourself if the trailer does wander off course and you’ve followed the procedure. Several factors can make a trailer wander off course when reversing such as the camber in the road right through to potholes. 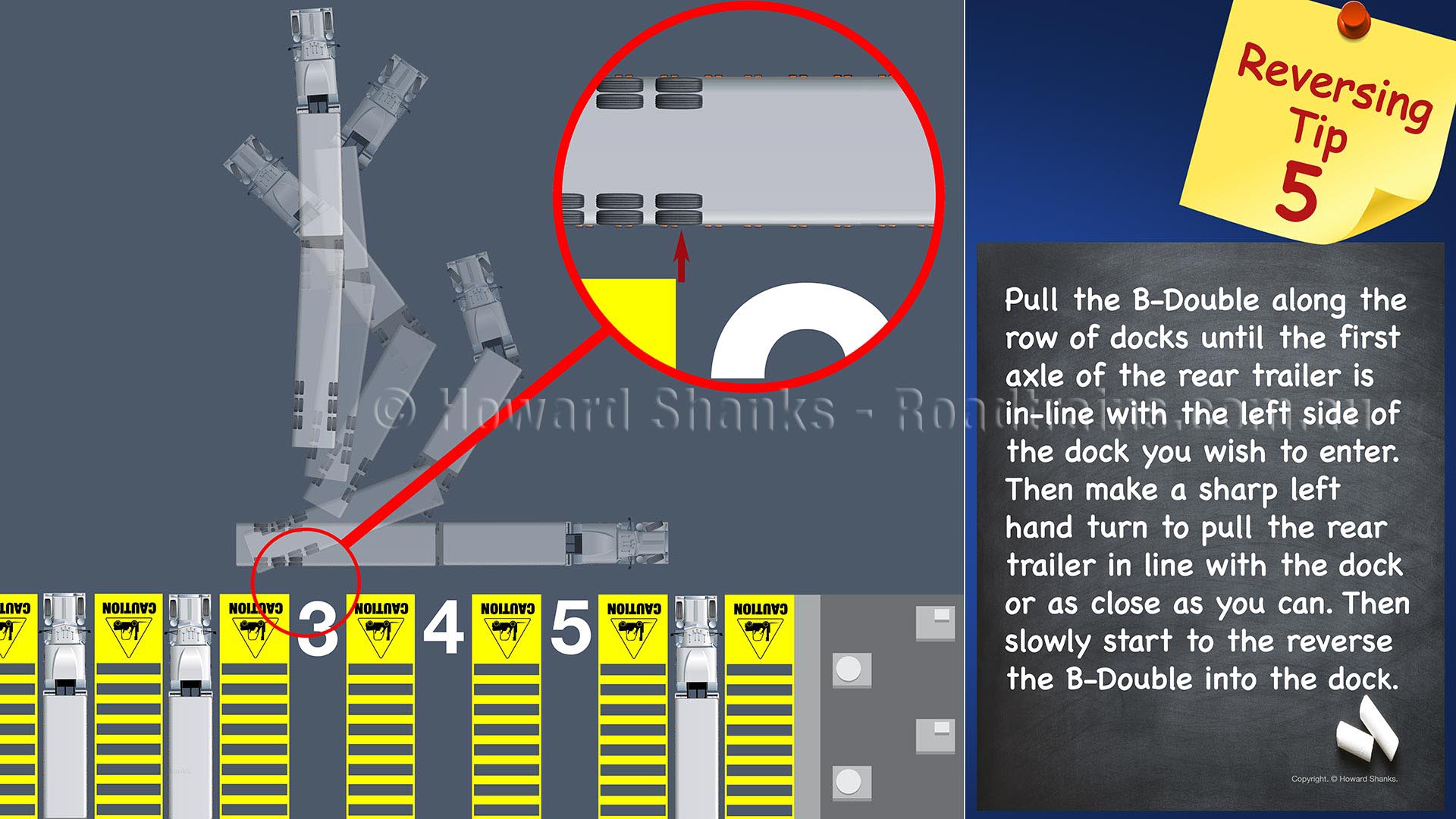 To reverse a B-Double into a finger dock, drive the combination right over to the dock then past the dock you are attempting to reverse into until the first axle on the rear trailer lines up with the left-hand edge of the dock. Now turn the truck hard left, if there is enough room keep going till the rear trailer is as straight as you can get it in front of the dock then swing hard right to straighten up the lead trailer. Now the combination is straight in line with dock simply reveres it straight back into the dock.

Sadly, it’s not always a perfect world and there is not always enough room to pull the B-Double straight in front of the dock. Follow the same procedure as above, but when you turn hard right keep going hard right till the lead trailer and your prime mover are inline. This way you can easily steer the rear trailer back into the dock using the lead trailer and prime mover as a single unit as we described earlier. Once you have the rear trailer in the dock, straighten the lead trailer up. If necessary you may need to pull the combination forward to slightly straighten up B-Double.

The main take-away is to remember to only make small changes to the steering wheel and take your time. 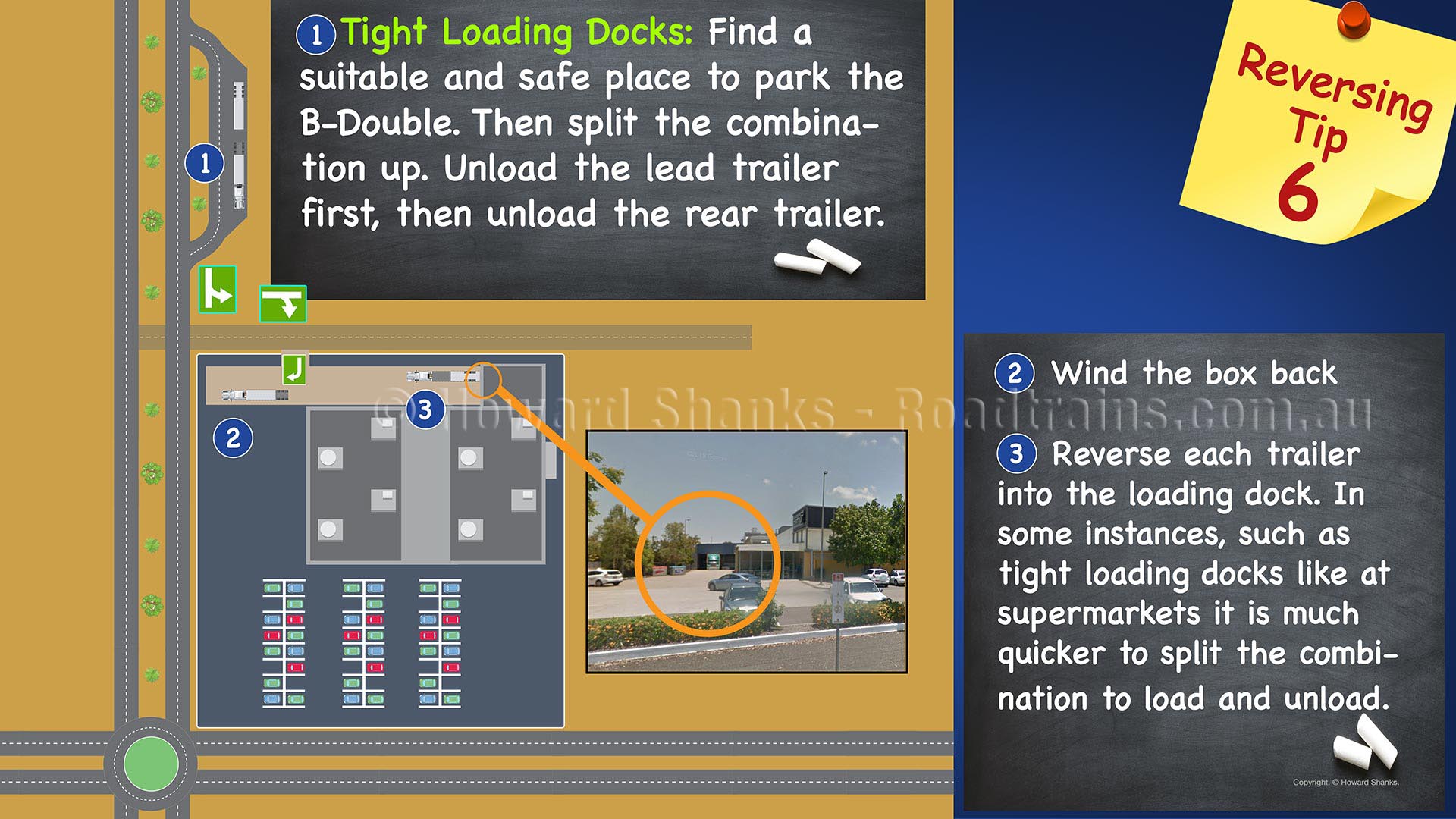