Words and photography by Howard Shanks. Images supplied by Knorr-Bremse

The Knorr-Bremse Trailer Response Management (TRM) module is a device that improves heavy vehicle brake response time and significantly reduces combination stopping distance. It is an essential piece of equipment for prime movers without an electronic braking signal that tow smart trailers fitted with compatible EBS units, like the Knorr-Bremse TEBS-G2.2 or Haldex Gen-3 from BPW. The TRM module is also used to extend the electronic signal to the rear of trailers that are longer than 18-meters as well as split electronic signals to integrate braking across axles in multiple trailer configurations or those trailers with more than five axles, but more on how that works later. 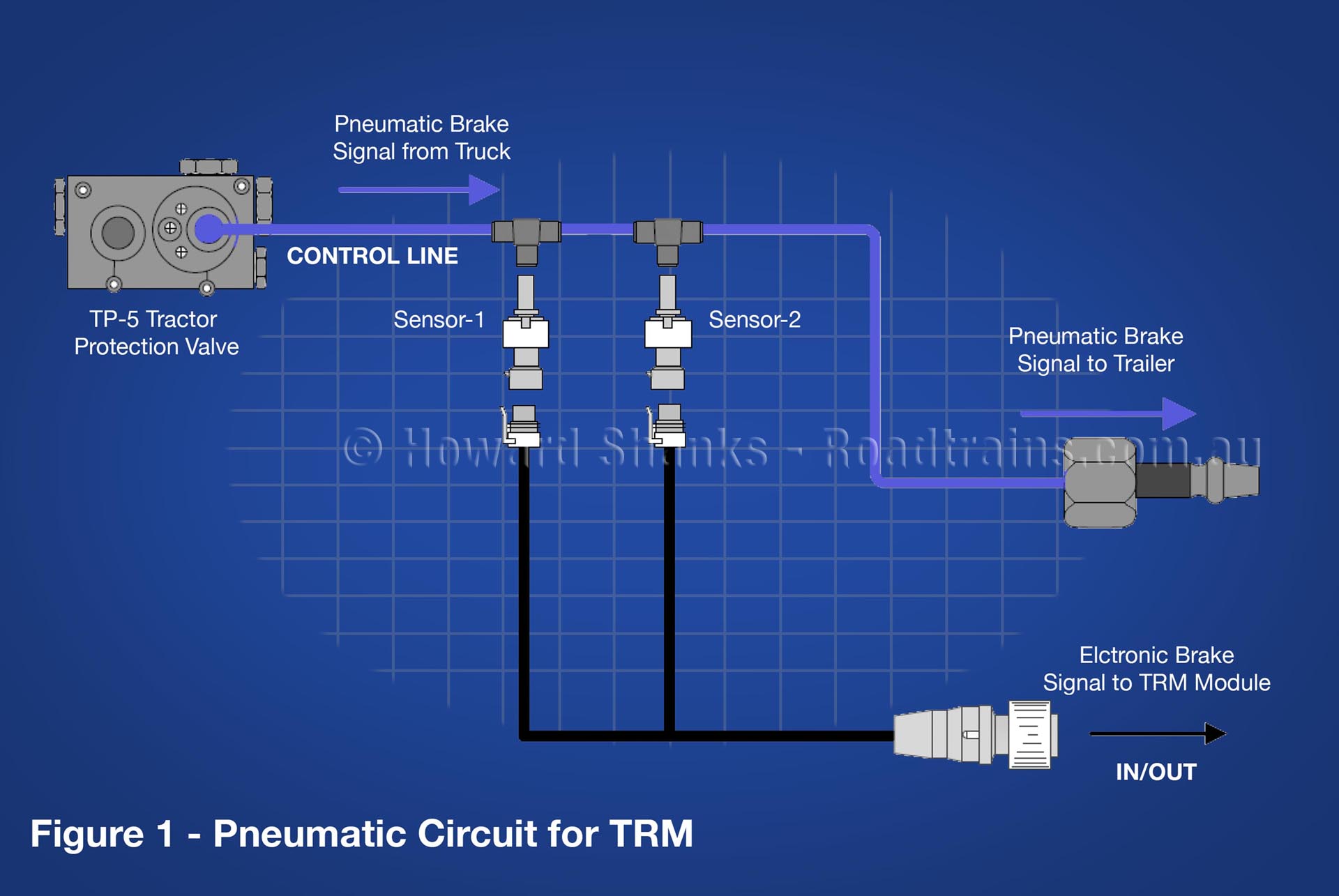 When the TRM module is fitted to a prime mover without an electronic braking system the TRM module measures the pneumatic control line pressure for the trailer from the foot brake and generates an electronic representation of this value on the ISO11992 CAN bus. Because this electronic brake signal is considerably faster than the pneumatic signal when transmitted over long distances, the brake apply and release times of a connected trailer or combination trailers fitted with compatible Trailer Electronic Brake Systems (TEBS) will be significantly improved.

On a prime mover installation, the TRM module has two pressure sensors installed in close proximity along the pneumatic brake line. These sensors convert the pneumatic brake signal and their electrical outputs are sent to the TRM unit via the in-out line. These pressure sensors are monitored for electrical errors such as open-circuit; in addition, the measured pressure values are compared against each other, a so-called sensor crosscheck fault is generated if the values differ. 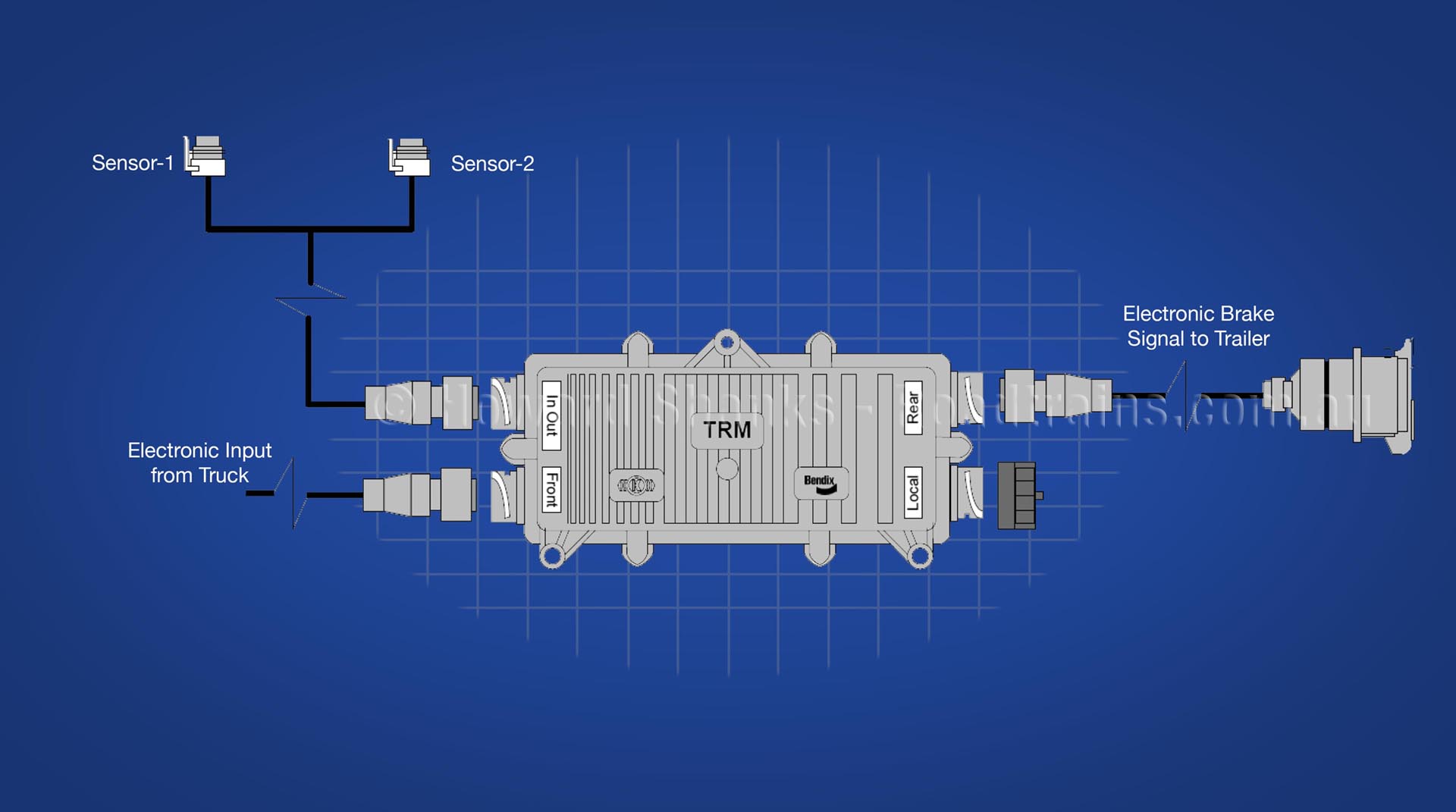 During field testing, Knorr Bremse trailed a 53-meter quad road train fitted with conventional air brakes and using pneumatic signal transmission only then compared its stopping distance to one fitted with TRM and TEBS-G2.2. Surprisingly on the old pneumatic road train, only 75 per-cent of the braking force was available after a 1.6 second delay following the application of the brake pedal. However, when the unit fitted with the TRM with TEBS-G2.2 was trialled the electronic signal transmission significantly reduced the response time to less than a quarter of a second with 100 percent braking force. This in turn greatly reduced the stopping distance of the combination.

Closer to home, tests carried out on a typical B-Double unit reveal stopping the distance of the combination fitted TRM on the prime mover and TEBS-G2.2 on the trailers is reduced by up to 2.5 metres.

“By using an electronic signal means that all the brakes actuate at the same time,” Brent Medlin, Knorr-Bremse Australia’s Technical and Account Manager OE Truck, explained. “It’s not a case of the prime mover braking first, followed by the first trailer, then the second trailer and so on, all at different intervals as is the case with a pneumatic only system.  The TRM module and TEBS-G2.2 deliver significantly improved brake balance and performance which consequently greatly enhances safety and stability, not to mention lower operating costs through the increased efficiency of the braking system.”

“it is important to note that the ISO 11992 CAN bus specification limits the length of the CAN line to 40-meters,” Brett continued. “Basically, you allow 15-meters of CAN line to be routed around the prime mover chassis. Then seven meters for the trailer connection which allows for routing on a convertor dolly and finally 18-meters of CAN line in the trailer. Therefore, a TRM module is required on each trailer to split the electronic signal and transmit the signal on to the next trailer in succession.” 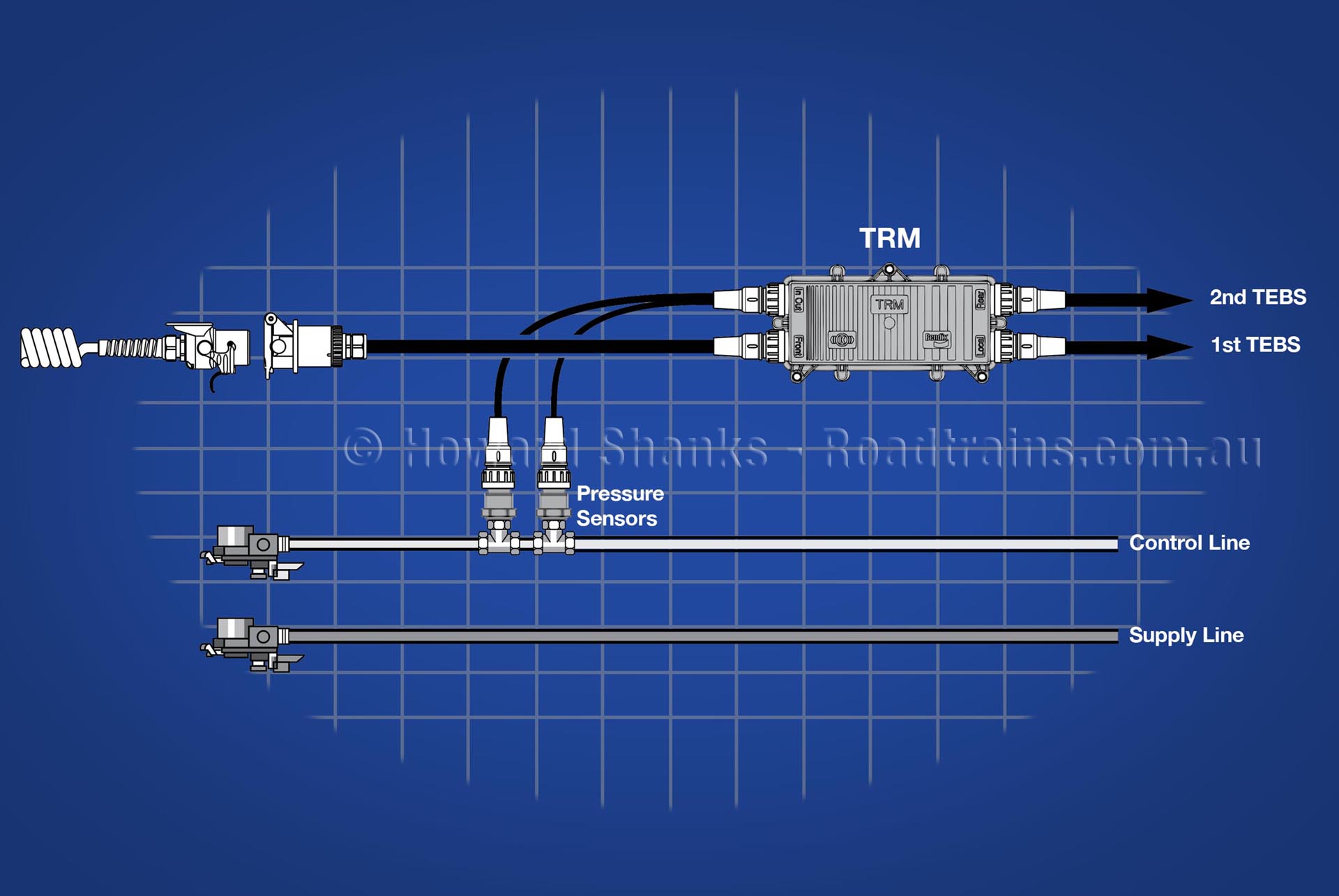 The TRM’s ability to send a second, completely independent signal to another TEBS module on a trailer further down the combination is significant asset for multi-combination operators. On a typical B-Double trailer combination, the lead trailer in the B-Double set would have a TRM unit mounted near the skid-plate and two pressure sensors are mounted on the control line similarly to the prime mover installation. This generates an electronic signal that is fed to the both trailers from the inbuilt splitter system of the TRM module. In doing this, not only is braking performance improved, but it also creates the ability to extend the distance the electronic signal on combinations longer than 40 metres.  Another advantage is that older prime movers without ABS/EBS functionality can still tow the smart trailer and its smart functions will still operate.

Both the Knorr Bremse TRM module and TEBS-G2.2 are multi-volt from 8-32 volts DC.

One common question that is often asked is, what is CAN-bus? CAN-bus or CAN is the abbreviated term for ‘Controller Area Network’, which is a system developed by Bosch in 1986 as a means of communication between two or more electronic systems. In 1993 the CAN was given an International standard ISO 11898, yet it was only in 2014 that ISO 11992 for ABS braking was released. The CAN design concept allows microcontrollers and devices to communicate with each other within a vehicle without a host computer. For instance, the power train systems of the engine, transmission and instrument panel will typically have one system while the EBS system linking the braking elements is another.

Consequently, the CAN communication is the key link between vehicles and trailers in a combination. Through the communication between trailers to the prime mover, deceleration can be optimally matched between the prime over and trailer combination. Therefore, the brakes come on together and if each axle group is loaded differently in the combination the braking effort will be adjusted to give a far smother deceleration, with no wheel lock up or push/pull on the couplings. This is particularly handy in operations where multiple deliveries are part of the truck’s duties and weight distribution of the remaining freight can overload an axle group. Knorr-Bremse TEB-G2.2 iCargo function interfaces with the trailer’s air suspension system to adjust the pressure in the air bags to alter the load carried by that axle as well as controlling the brakes on that axle separately.

Like all components on a heavy vehicle regular maintenance is essential to ensure the TRM and TEBS units operate effectively and that any flagged fault codes are addressed in a timely manner using the appropriate diagnostic equipment.

However, given that these smart brake systems are highly capable devices and will adjust to changing situations and conditions there is one downside. That is, they may mask fundamental issues with the trailer’s foundation brake system or degraded brake performance due to wear.

All modern prime movers are required to have both and ABS and Trailer ABS (TEBS) lamp in the dash board to advise the driver if there is an issue with the systems. Detailed information on how to retrieve fault codes and diagnose problems can be found in the corresponding operator’s manual. 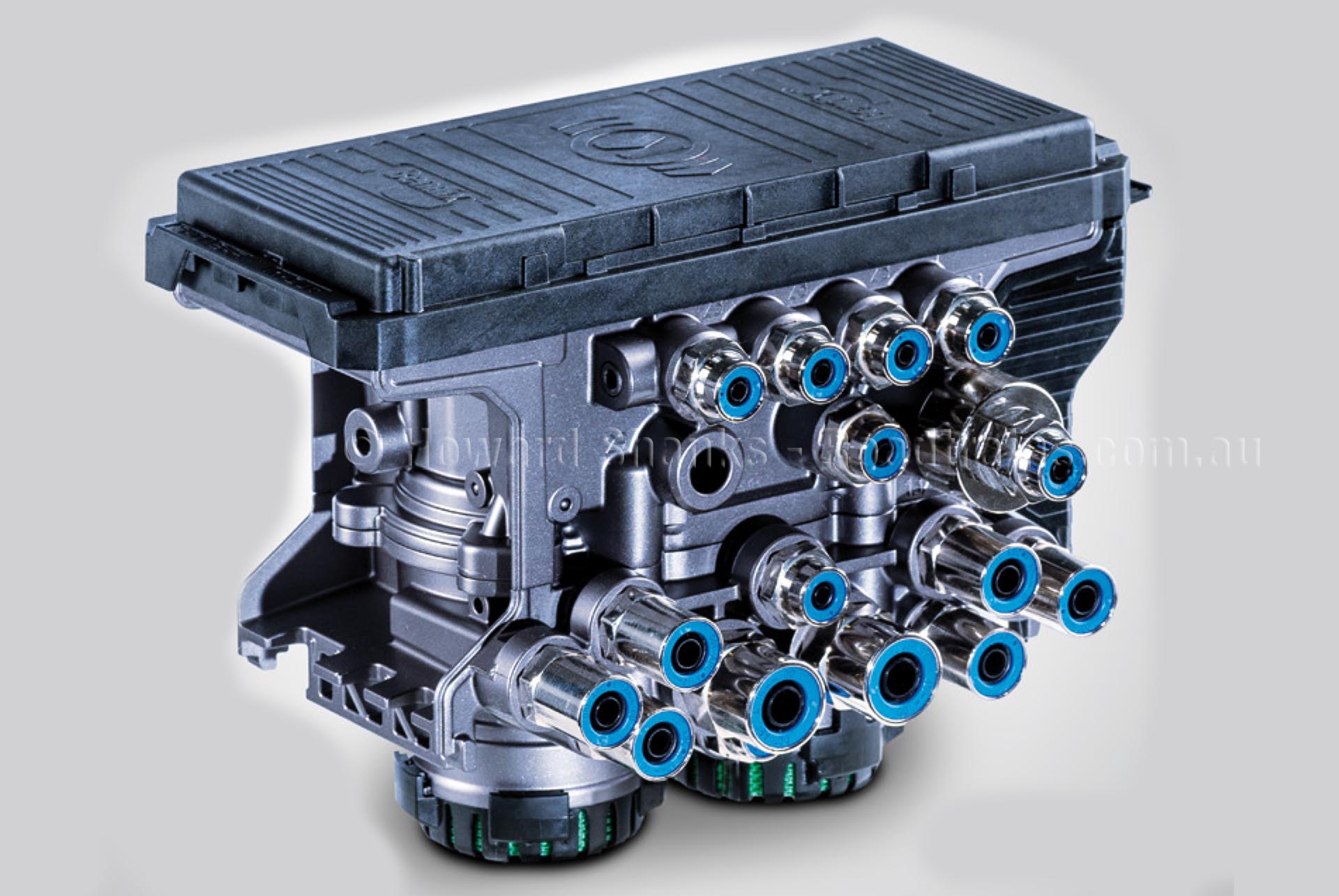 How Hub Reduction Differentials Work
2 May, 2022