Melbourne based Midway Concrete and Garden Supplies are one of a handful of independent Victorian concrete suppliers. There fleet of 60-plus agitators, mostly made-up of 6×4 and 8×4 models, service the north and west of inner-city Melbourne from concrete plants in Melton, South Morang and North Laverton. 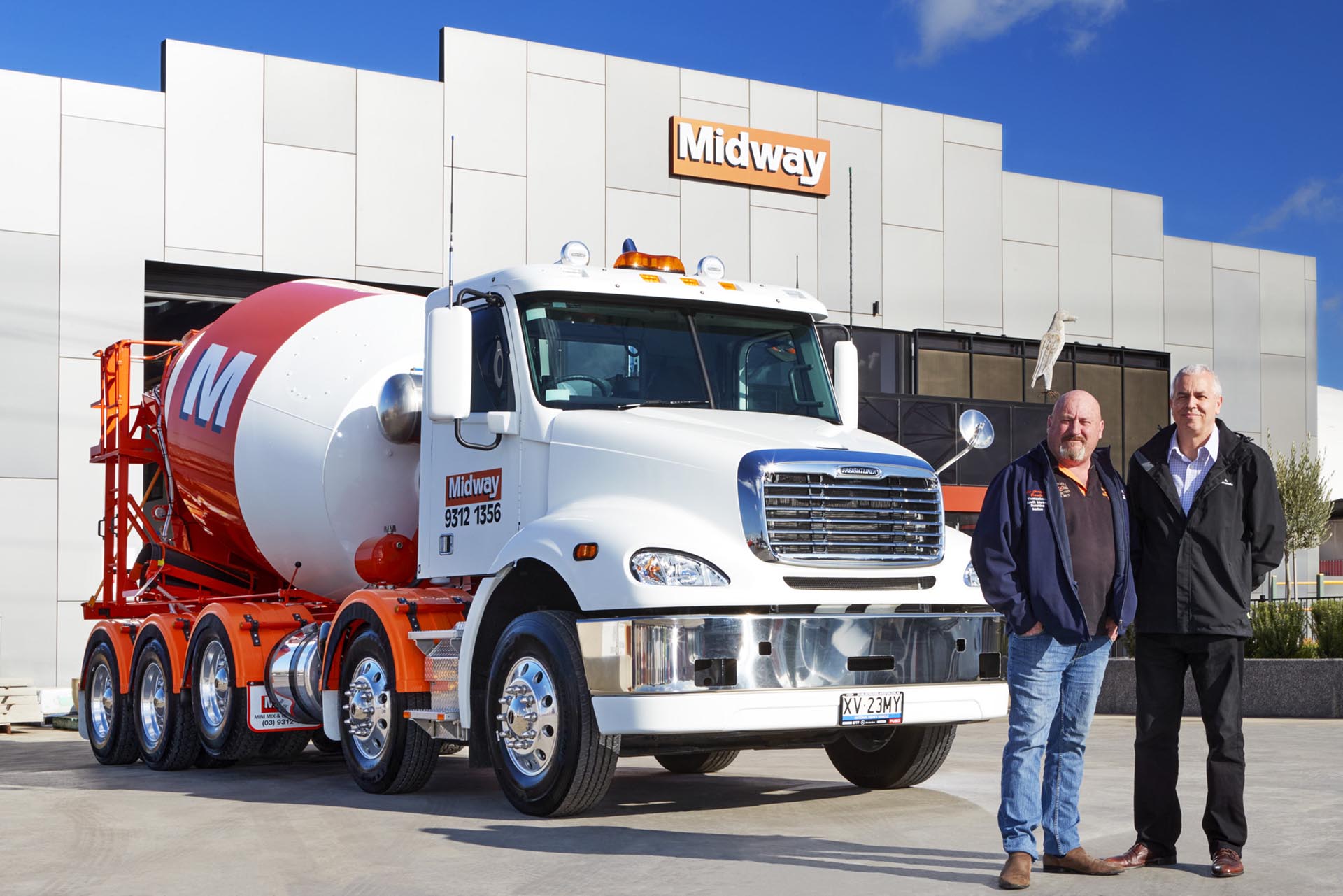 In an effort to increase productivity Midway Concrete and Garden Supplies recently took delivery of their first new Freightliner CL112 10×4 agitators to its fleet, which will enable an extra cubic metre of concrete to be delivered per load.

It is another chapter in the remarkable story of Midway, which services

Midway consisted of just two mini-mix trucks when David Boxshall and his wife Sharon bought it out almost 20 years ago. Mr Boxshall, the company’s Director, says moving to the new larger trucks was a logical next step.

Mr Boxshall says the Freightliner models will deliver productivity gains, and are far more manoeuvrable than the semi-trailer combinations used by some operators.

“We don’t want to use semis, I don’t think semis work for our line of work, the streets are too tight, so the 10x4s will work well,” he says.

Credit Choice Director, Vince Giunta, who has secured finance for Midway since Mr Boxshall brought the business back in 2001, says the new 10×4 model trucks make a lot of sense.

“With the extra capacity these new models can bring, it adds flexibility to the fleet of trucks and also improves productivity and ability to service the large clients with better delivery times, which is important when pouring concrete to various jobs,” Mr Giunta says. 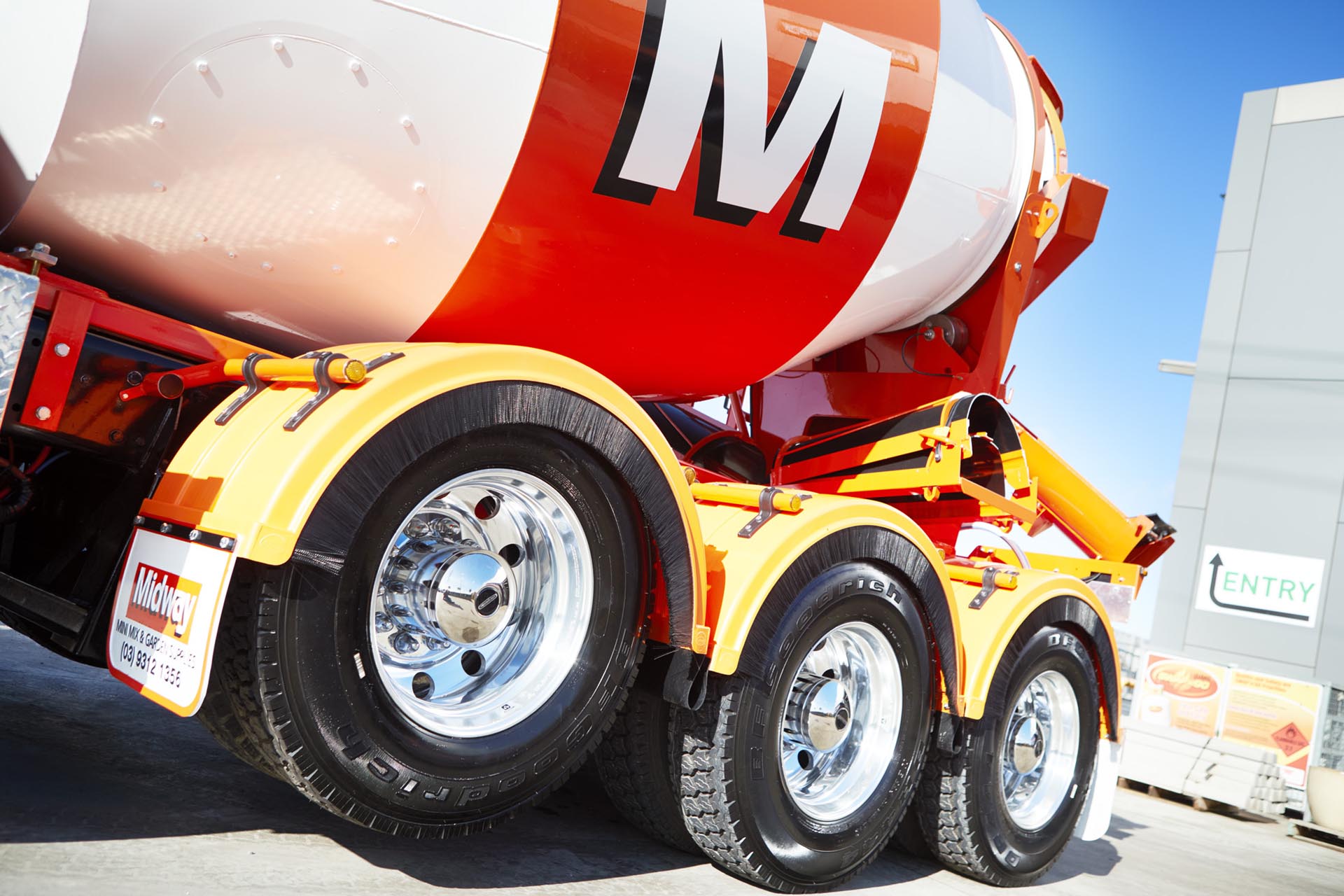 Mr Boxshall says that even if they don’t run full every trip, the 10×4 Freightliners still come out in front.

“It will go to the bigger jobs in the morning, but in the afternoon, it can do any load that comes along,” he says.

“It doesn’t matter whether it is full, it is about having the diversity of having the capacity,” he says.

The drive-in batching plant tower mixes the different material required for each load and fills an eight square metre agitator bowl in less than one minute, saving precious time.

Mr Boxhall likes the productivity of the 10×4 CL112, but was also attracted by the combination of a Cummins engine and Allison automatic transmission, which were given the tick of approval by the Midway workshop manager.

He was also happy to work on a deal with the Daimler Trucks Laverton General Manager, Marcus Prato, who had sold him a range of trucks in a previous role over a long period.

“I have a great relationship with Marcus and so does Peter, my mechanic,” Mr Boxshall says.

“I know that I can ring and the team will sort out whatever needs doing.” 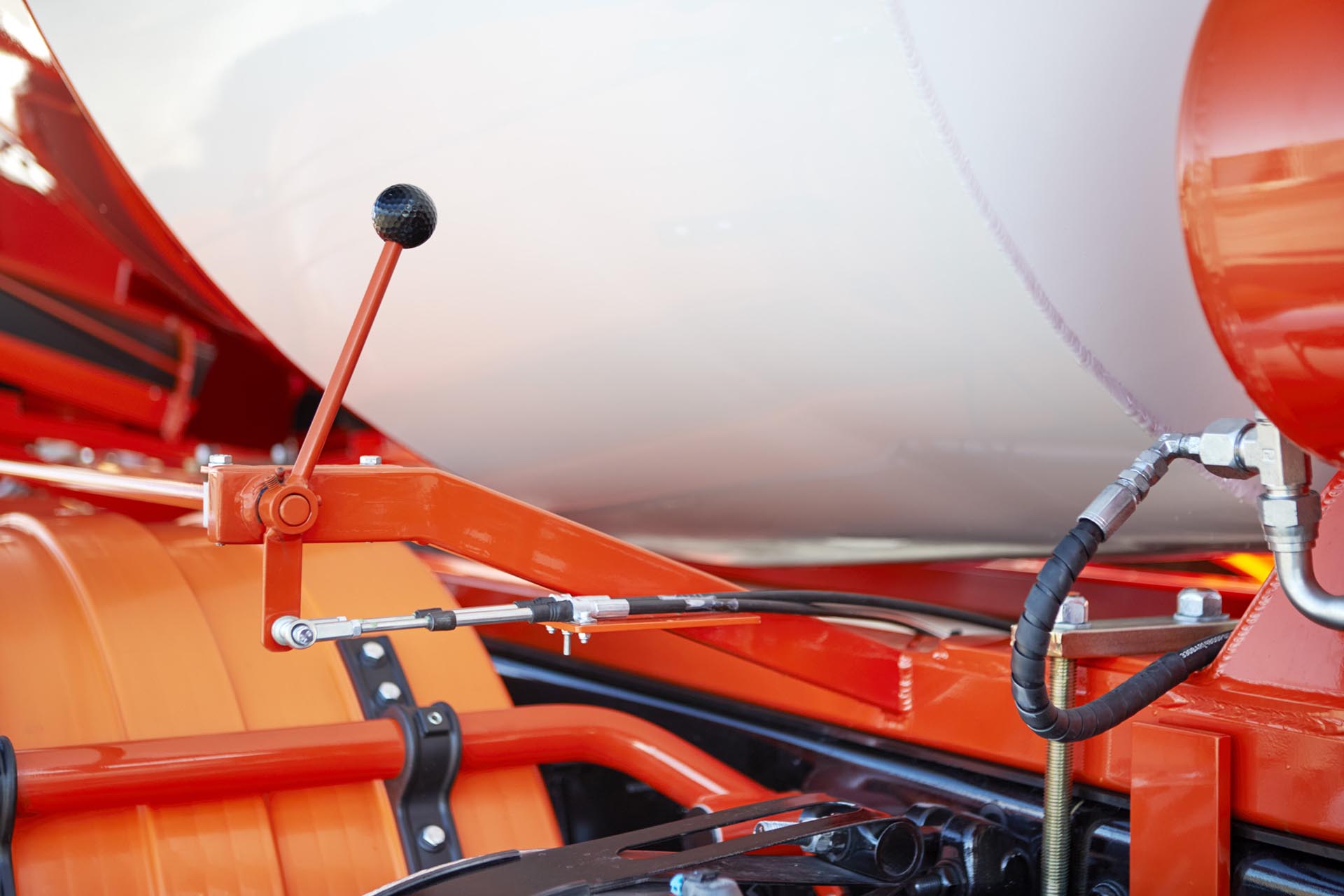 Mr Boxshall says the relationship with Mr Prato and Daimler Trucks Laverton reminds him of the way the Midway team is there for its customers. He says this approach gives the smaller Midway operation an advantage over the much larger corporate concrete suppliers.

“We deal with people face to face, we talk to people, we have them in the showroom or we pick up the phone and speak with them,” he says.

“The customers are not stuck on call waiting with a number, they have a name and we will answer their calls,” he says.

It uses an 8.9-litre Cummings in-line six-cylinder ISLe5 engine with ratings running through from 320hp to 400hp and is available with manual Eaton or Allison automatic transmission.