When it comes to specifying a vehicle to run in the remote west coast of Tasmania where the terrain is arguably the most inhospitable and rugged wildness in the land, the choice is limited. However Fuso’s Canter FG 4×4 is one vehicle that’s more than up to the challenge.

Even today getting to and from the mining village of Queenstown is a decent journey, the place is just that isolated. For instance, its more than a four and half hour drive from Hobart over in the east or if you’re coming from Devonport in the north its a three hour drive over treacherous mountain ranges. 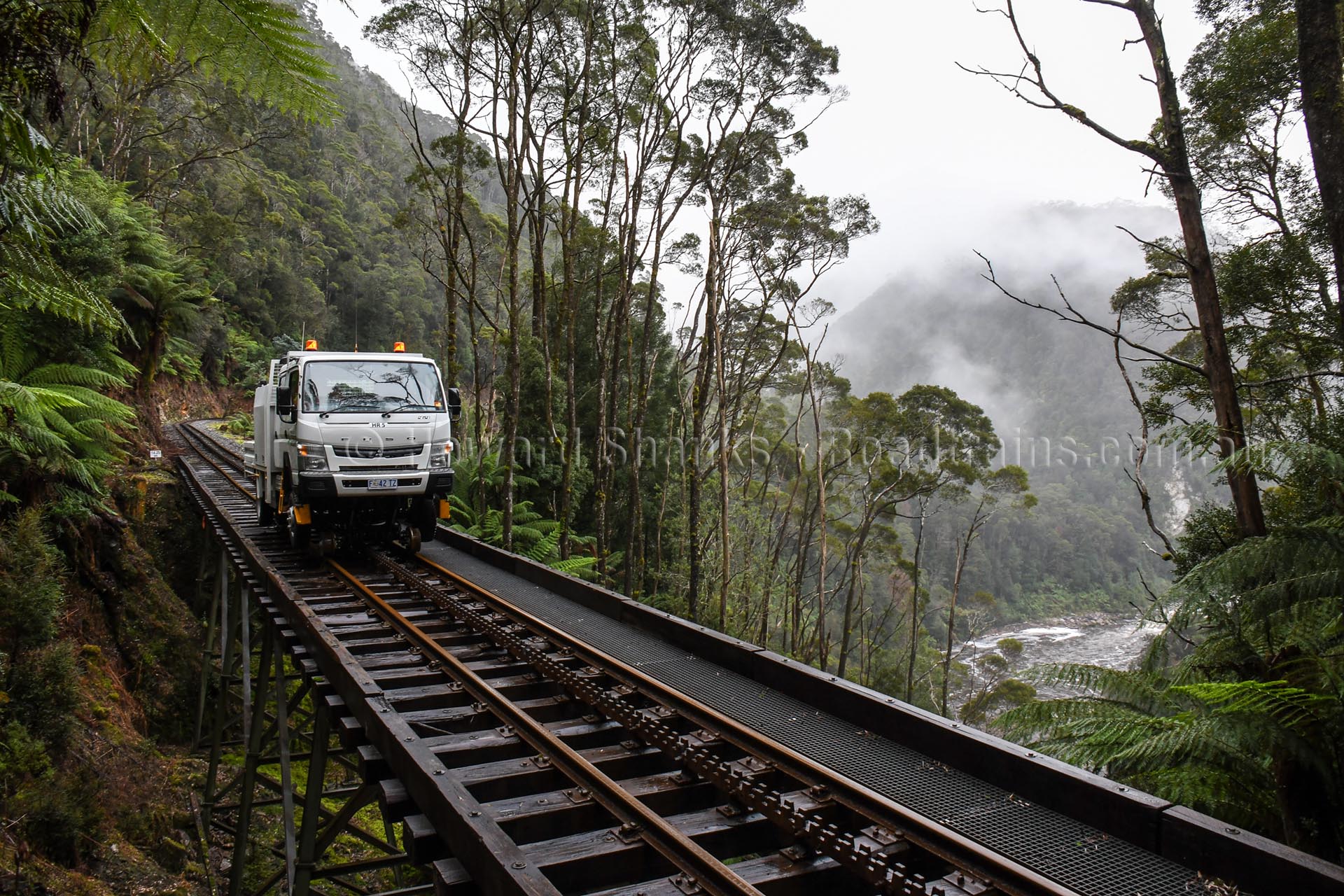 Up until the early sixties the main way freight arrived and left Queenstown, was the same way it’d done since the turn of the century, and that was on the unique ABT railway, operated by the Mount Lyell Mining and Railway Company. The line ran 34.5 km to the harbour side village of Strahan, nestled on the shores of the immense Macquarie Harbour.

In fact it wasn’t until 1932 that a road from Hobart was eventually carved through the mountains to Queenstown. However the railway continued to operate up until it closed in 1963 with road transport proving more economical via the newly opened Murchison Highway linking Queenstown to the ports at Burnie and Devonport.

In 2002 the gentle hiss of steam once again rolled out from under an ABT steam engine when the line was reopened as a tourist train. Today the West Coast Wilderness Railway (WCWR) operates the iconic railway, which has been awarded with Tasmania’s first-ever Engineering Heritage International Marker. It has also been awarded Best Tourist Attraction/Experience over the past two years at the Cradle Coast Tourism Awards. 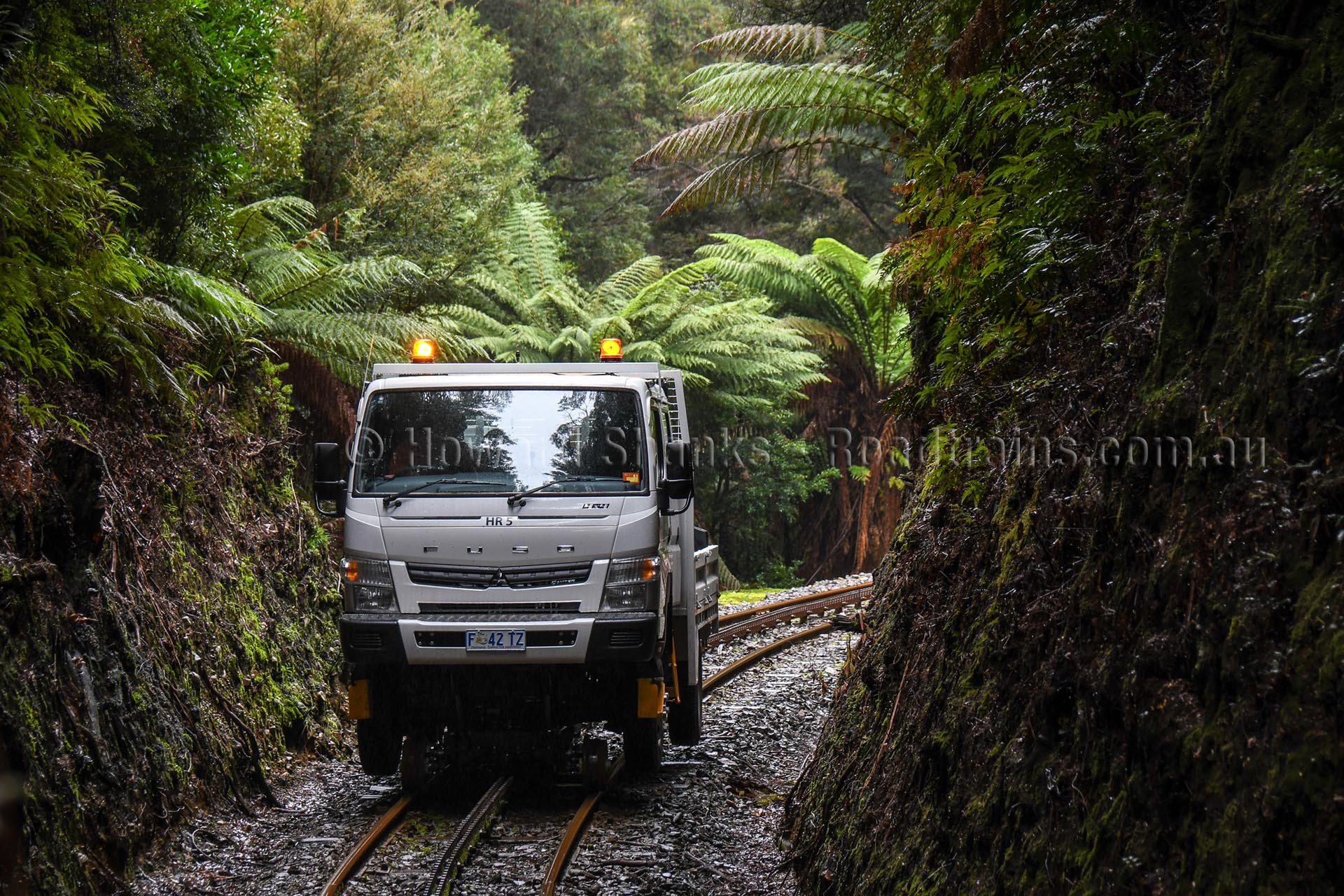 This Hy-rail system is commonly referred to as the front elevated model and used on medium vehicles where the road wheels are a similar distance apart as the gauge of the rails.

Powering this Fuso is their 4-cylinder inline DOHC 4-Valve 3.0-litre Euro-5 engine. It uses a variable geometry turbo charger with air-to-air intercooling that punches out 110kW with 370Nm torque.

The transmission is Fuso’s MO38S5 five-speed manual gearbox with an in-dash gearshift lever. The gearbox features provision for a PTO mounting on the LH side. 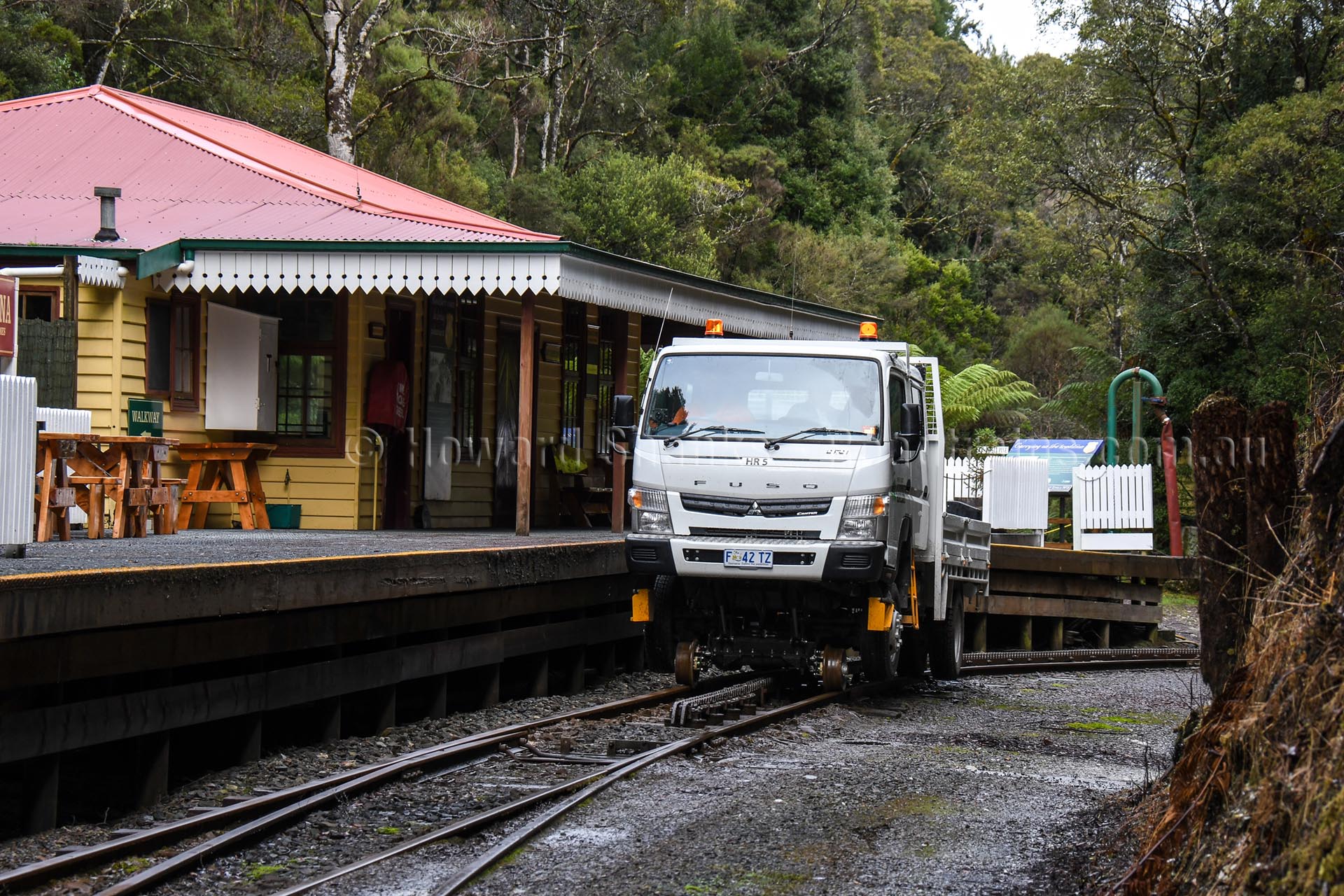 The multi-media system is pretty much the same as you’d find on equivalent trucks in this class, and it displays truck-specific navigation if needed. The 155mm touch screen can be connected up to three cameras. Along with all the navigation functions the system doubles a CD/DVD player with AM/FM radio and USB port for iPod and other devices. 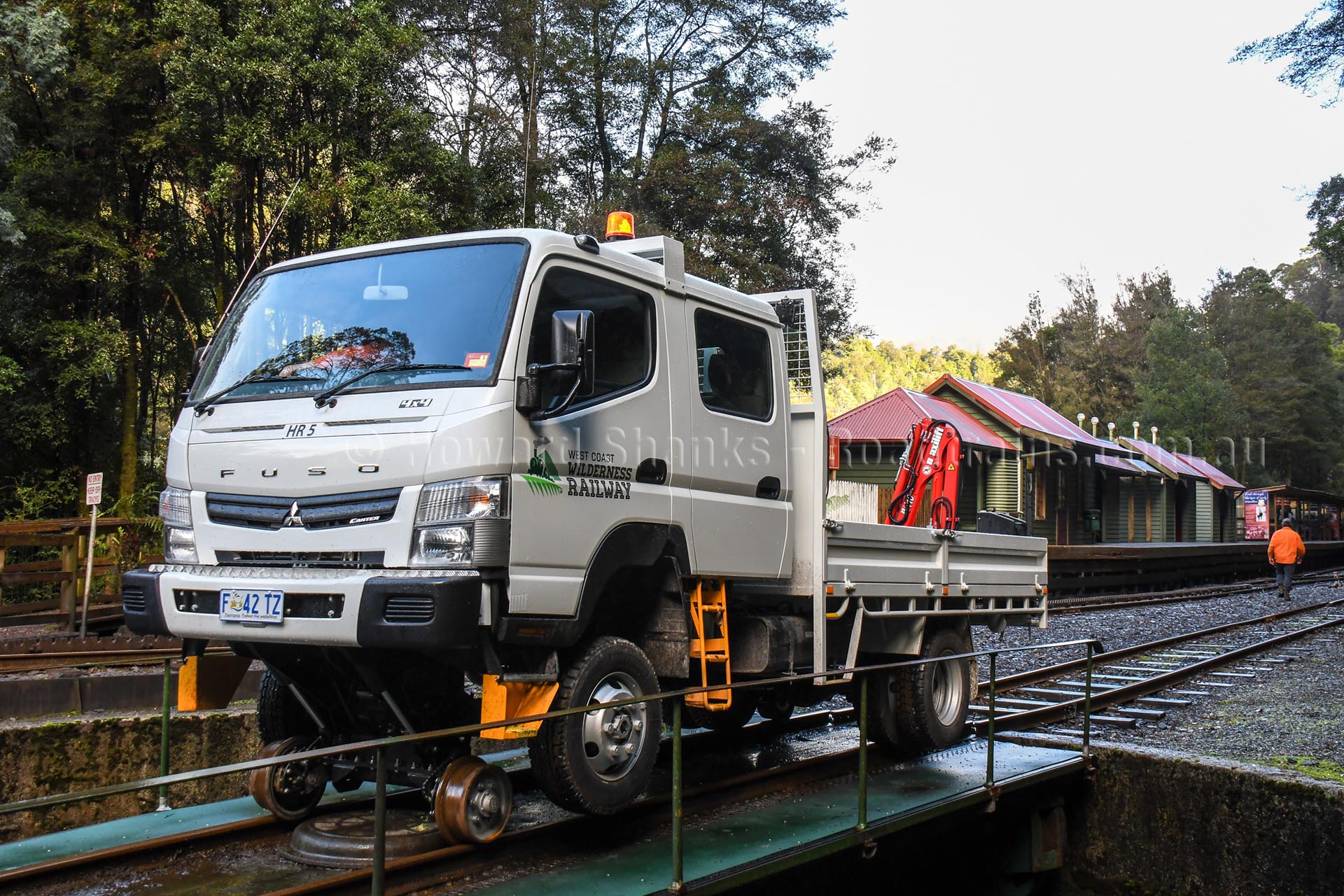 There is generous storage overhead as well as on the dash and in the doors, and there are two drink holders on the middle of the dash.

The driver gets a suspended seat with lumber support and left hand arm rest. Meantime the passengers are treated to bench seats.

In the back, there is plenty of legroom and headroom and the rear seats are surprisingly comfortable.

Under the left-hand side of the rear seat is a handy storage bin accessed by raising the seat base. It’s a great place for tools and other equipment and points to the optimum use of all the cabin space in the truck’s design.

The Fuso utilises 12V negative earth electrics. It features a 110amp alternator with two 12V 7-Ah/5hr batteries. Inside the cabin there is a 12-Volt accessory power outlet. 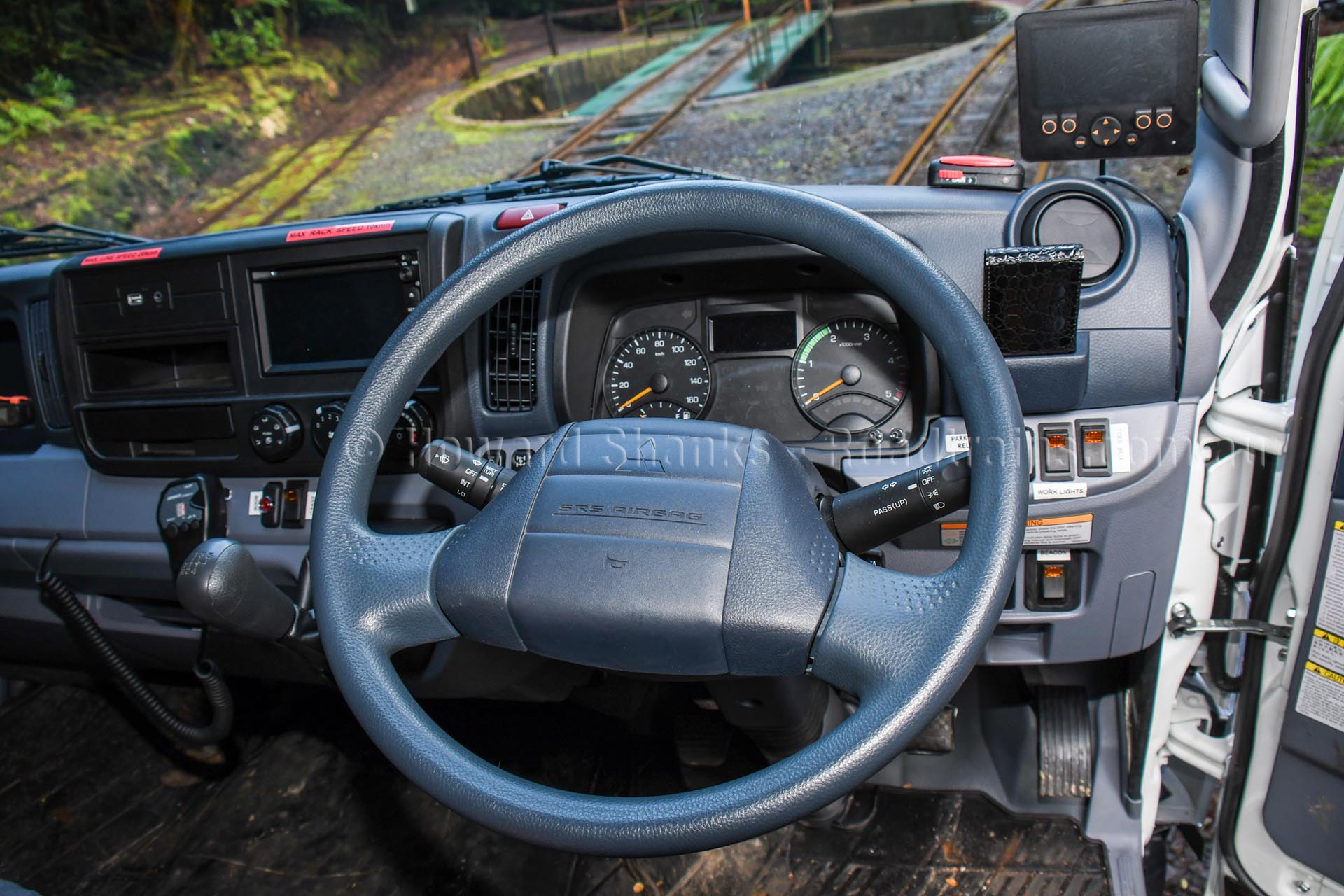 Long service intervals on the Fuso are 30,000km 12months or 600 hours (which ever occurs first) keep the vehicles operating costs to a minimum.

In a first for a Japanese truck manufacturer in Australia, Fuso has increased its standard manufacturer’s warranty to five years on all new trucks.

Fuso says it is a full manufacturer’s warranty and includes genuine Fuso parts and service from an authorised Fuso dealer.

The warranty lasts for five years or, varying between models, a certain amount of kilometres or operating hours, whichever comes first. The distance or hours covered depends on the model.

“Fuso is prepared to back our great vehicles with a class-leading warranty that gives our customers real peace of mind,” says Fuso Truck and Bus Director, Justin Whitford.

The warranty covers almost everything on the vehicles, except for tyres, consumables, accidental damage, wear and tear items, non-factory supplied accessories and non-approved aftermarket modifications. 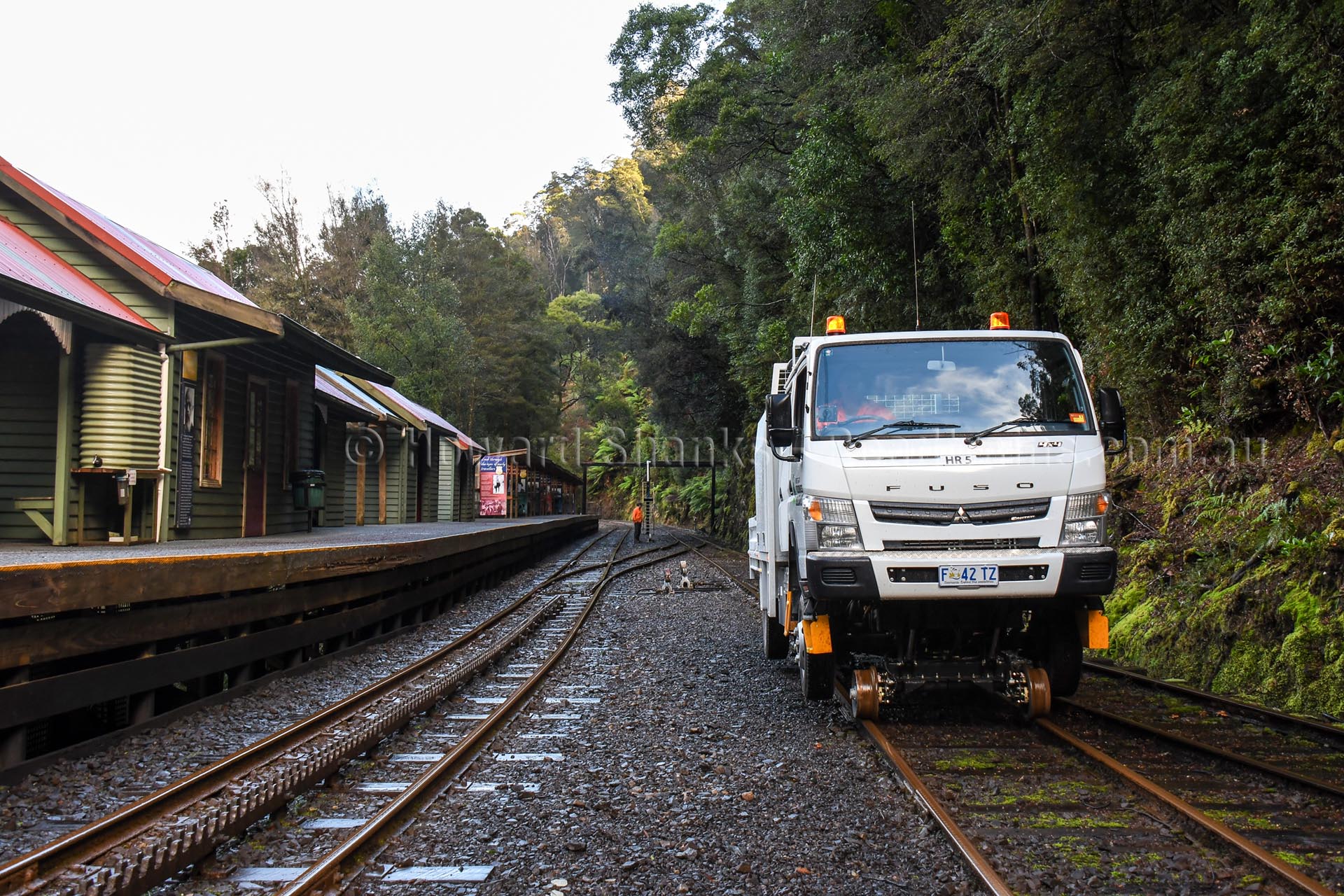 In its daily operation this Fuso Canter FG 4×4 first duty is to make the trip from its base in Queenstown to Strahan before any trains depart to ensure the track is clear.

During its regular track maintenance tasks the Fuso utlitises the steam engine’s turntable to turn around for its intended direction of travel.

Unlike the little steel wheeled steam engine the Fuso’s light tare weight and rubber tyres ensure it has ample traction on the steep wet rails with abundant of capacity for a decent load.

The wide cab with provision for seven people enables the transportation of large work crew into a remote work site efficiently.

Safety and environment features are high on the priority list of the WCWR and the Fuso Canter FG 4×4 ticked all the boxes. 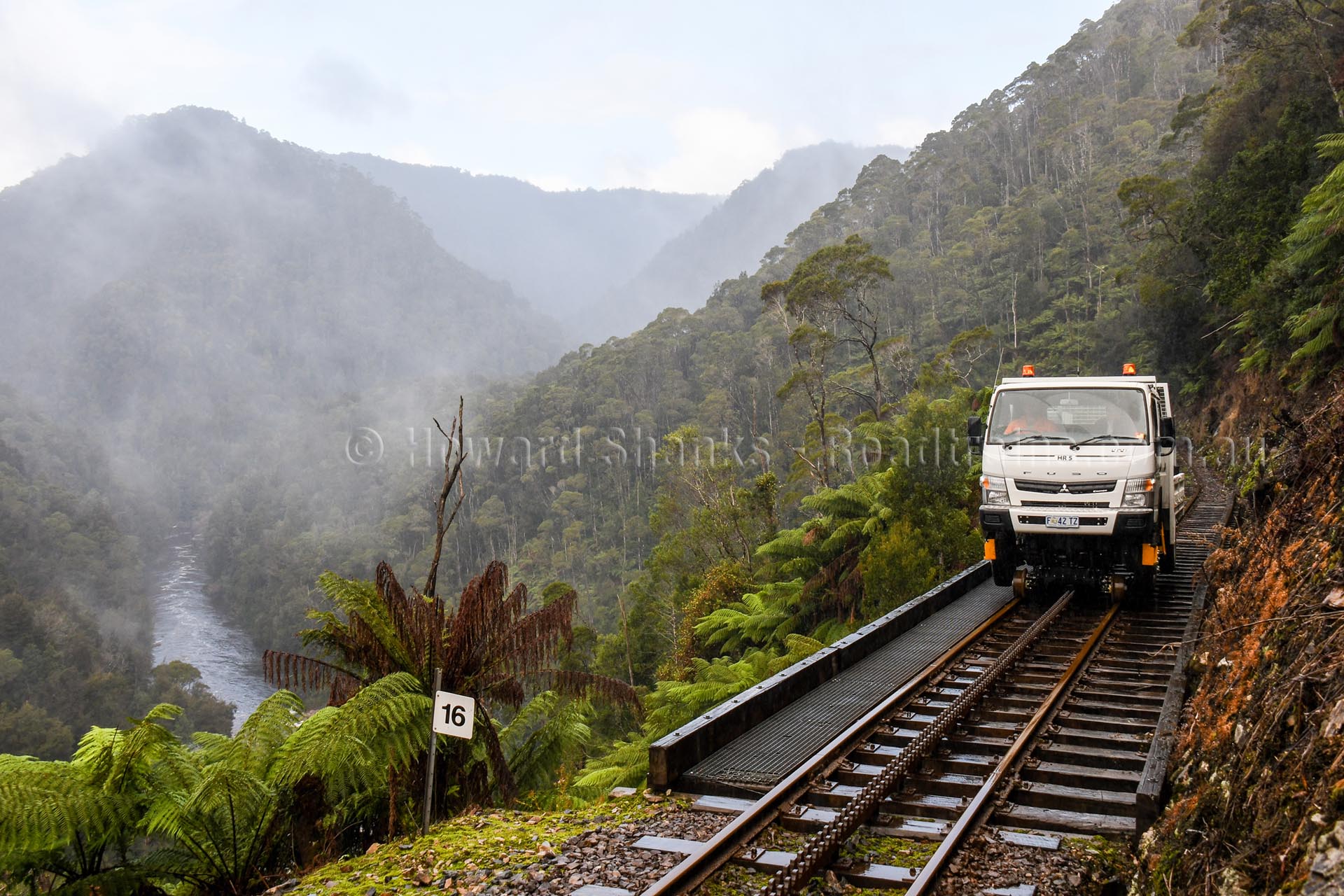 When you work in a World Heritage listed area such as the cool temperate rainforests, your equipment needs to meet some pretty strict criteria and the Fuso Canter’s low fuel consumption Euro-5 engine with extended service intervals ensures it exceeds that list.

Crew chief and Fuso Canter driver Darren “Bogga” Bryce cites the Fuso Canter’s fuel-efficient engine and reputation for reliability combined with the back up service from local Fuso dealer CJD Equipment as swaying mechanical factors in choosing the Fuso Canter 4×4. 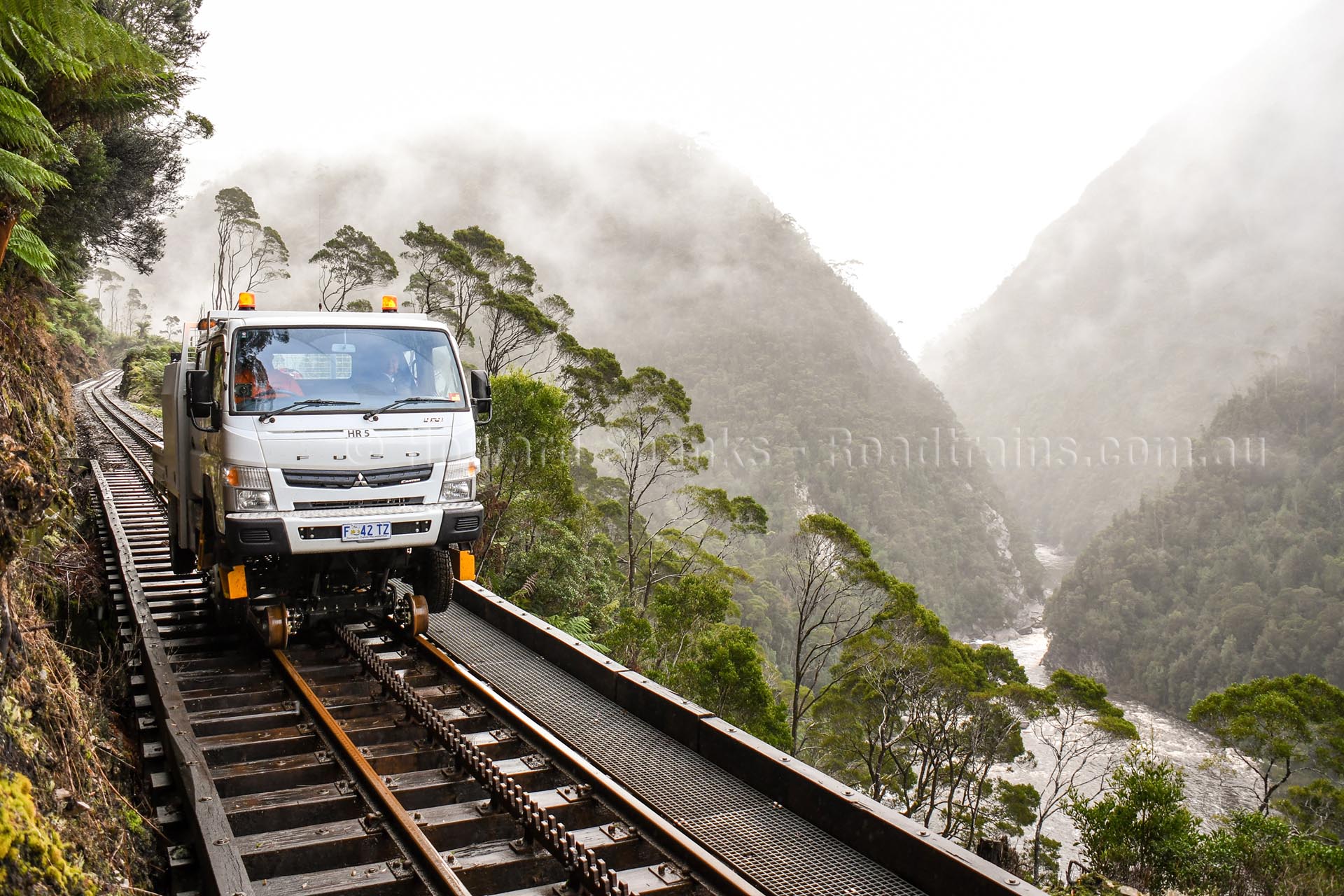